This is just a list of useful info I have found while playing, that I thought would be nice to know from the beginning. If you would rather figure this stuff out while playing, which is more fun for some people, come back after getting some playtime in to learn what you missed. 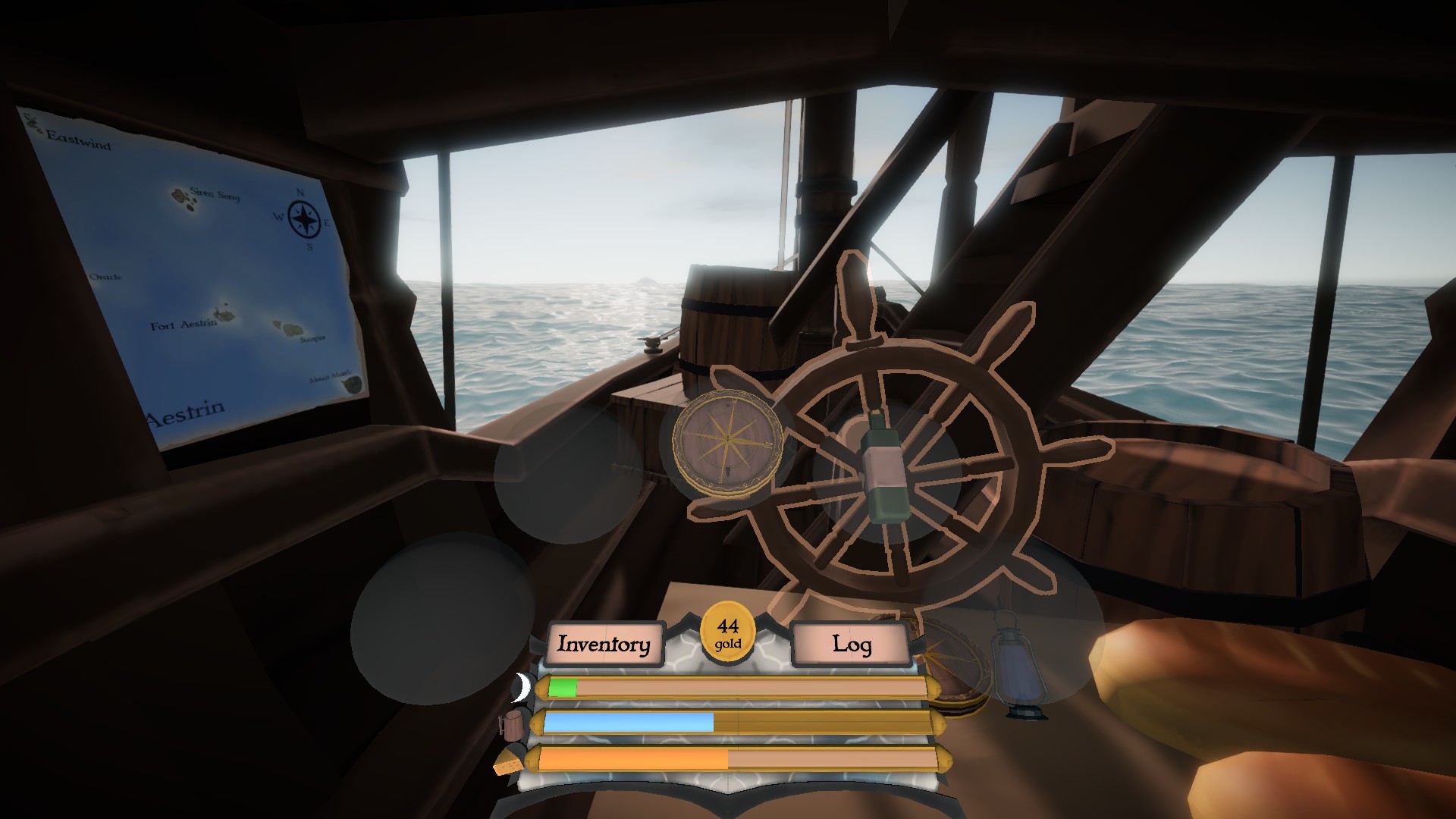 The compass works from the inventory, and is visible even at night. The steering wheel is usable while doing this.

The fishing pole is usable during any task, meaning you can cast, then trim the sails or set your course, if you catch something, the pole will turn in your hands.

I took me an embarrassingly long time to figure out that you need to scroll to zoom with the Spyglass.

If the navigation guide confused you, just remember that the north star is the second star in a short chain of four, with the fourth being furthest from the others.

If you were too lazy to look up the Wikipedia article on tacking, here is the link:

And here is a small snippet I thought was important, even if you already know how to tack.

When beating to windward, often your desired destination although still in the no sail zone, is not aligned directly upwind – to the eye of the wind. In this case one tack becomes more favorable than the other – it angles more closely in the direction you wish to travel than the other tack does. Then the best strategy is to stay on this favorable tack as much as possible, and shorten the time you need to sail on the unfavorable tack. This will result in a faster passage with less wasted effort. Your overall course then is not an equal zig-zag as in the diagrams above, but more of a saw tooth pattern. If while on this tack the wind shifts in your favor, called a “lift,” and allows you to point up even more, so much the better, then this tack is even more favorable. But if the wind shifts against you and makes you fall off, called a “header,” then the opposite tack may become the more favorable course.”

Not my words, check the link above for the rest of the article.

When your ship begins to list, especially during storms, you can move cargo to either side of the ship to change the center of mass. Most of the time this isn’t necessary, but if full sail is making you take on water, this allows you to stay full sail in rough weather. Depending on how much cargo you have, its very possible to over do it. I’ve found a single crate of copper does the job perfectly.

Remember not to overload the boat, its very possible to make the boat sit low in the water, making it susceptible to storms. 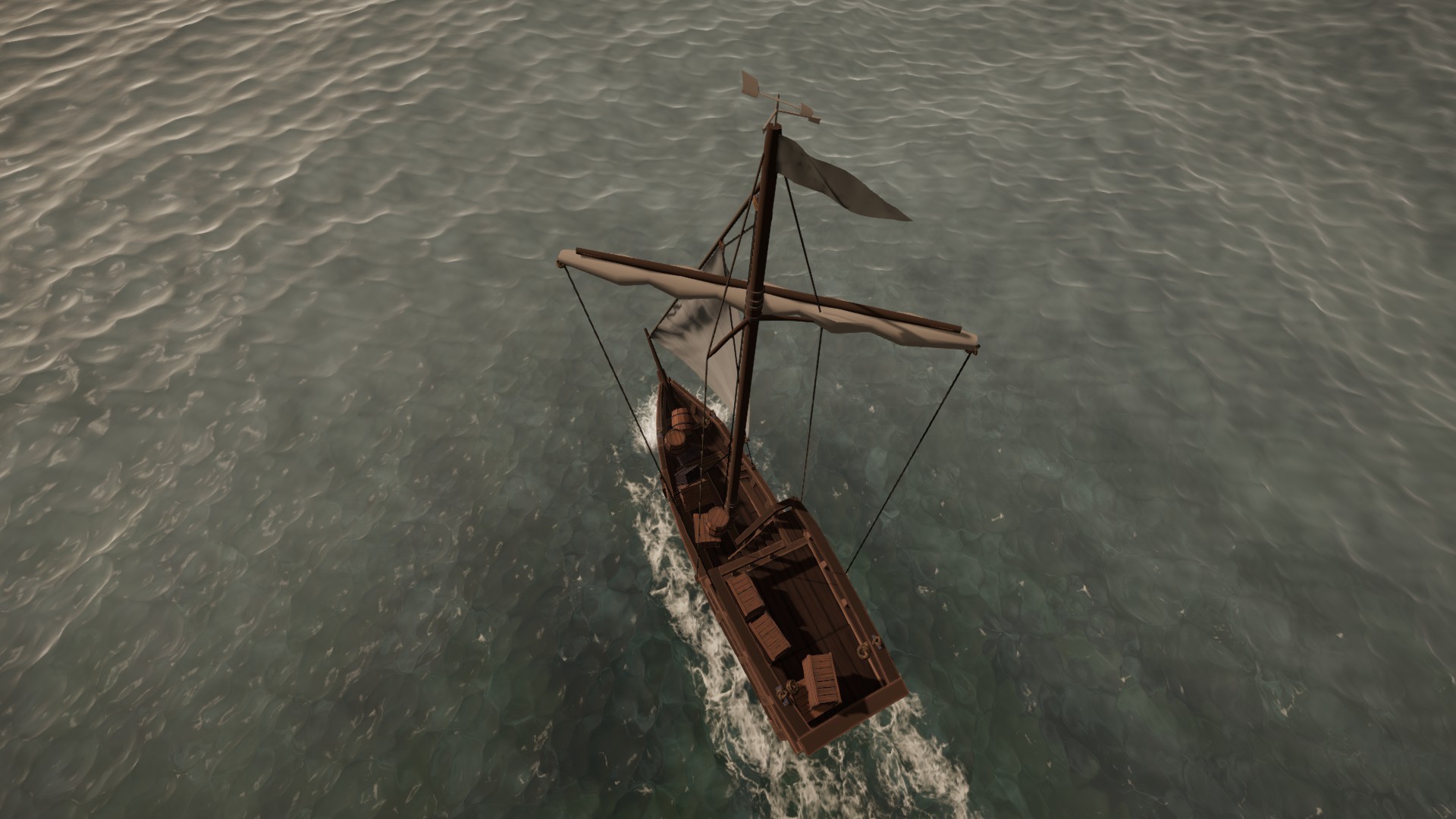 The Aestrin ship has has a few advantages and disadvantages. It’s biggest problem being the inability to use both sails in the close position, resulting in slow speeds going upwind. The main sail only produces thrust a little more than halfway between the close and beam reach positions, because the sail can only rotate 45 degrees to port and starboard. 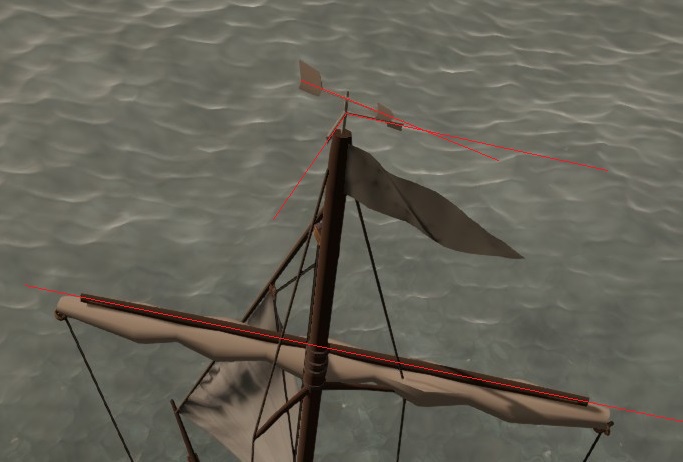 In the image you can see the weather vane has metal prongs indicating the max rotation of the main sail. Combined with the metal wind indicator this makes it much easier to tell if the main sail would catch any wind. This is useful because the main sail takes forever to rotate.

As far as I can tell, only the Aestrin ship has this kind of sail, so this only works on this ship. The forward sail has two sheet winches. If you tighten the winch opposite the sail all the way, the sail will produce reverse thrust instead of forward thrust. The main sail also does this if used backwards, though it doesn’t produce as much thrust. This works only in the close and beam reach positions.

If you tighten the sheet winch opposite the forward sail to the close angle, then tack and do the same with the other, you can tack back and forth without further adjustment.

This is all about Sailwind – Beginners Guide Gameplay Tips; I hope you enjoy reading the Guide! If you feel like we should add more information or we forget/mistake, please let us know via commenting below, and thanks! See you soon!