In this guide I will cover campaign mode in Rising storm 2: Vietnam

Campaign mode is a mode for Rising storm 2 that expand gameplay from one round to multiple rounds as a war. You don’t pick team in the beginning of each round. You stay in the team you chose until you get autobalanced or switch team.

In the campaign mode you feel more connected to your team. You don’t only want to win the round but win the entire war as well. 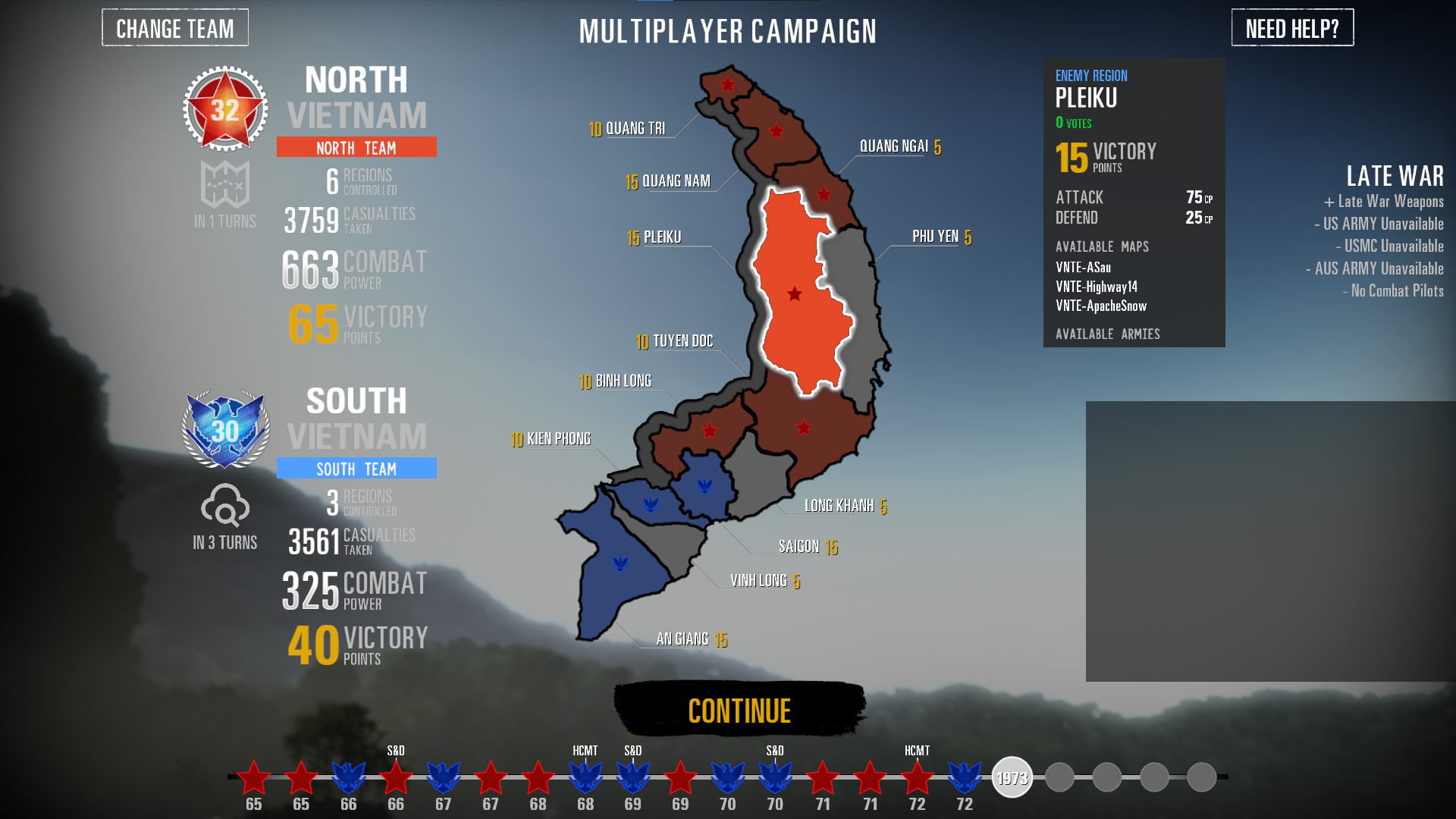 The essential thing of campaign is campaign map 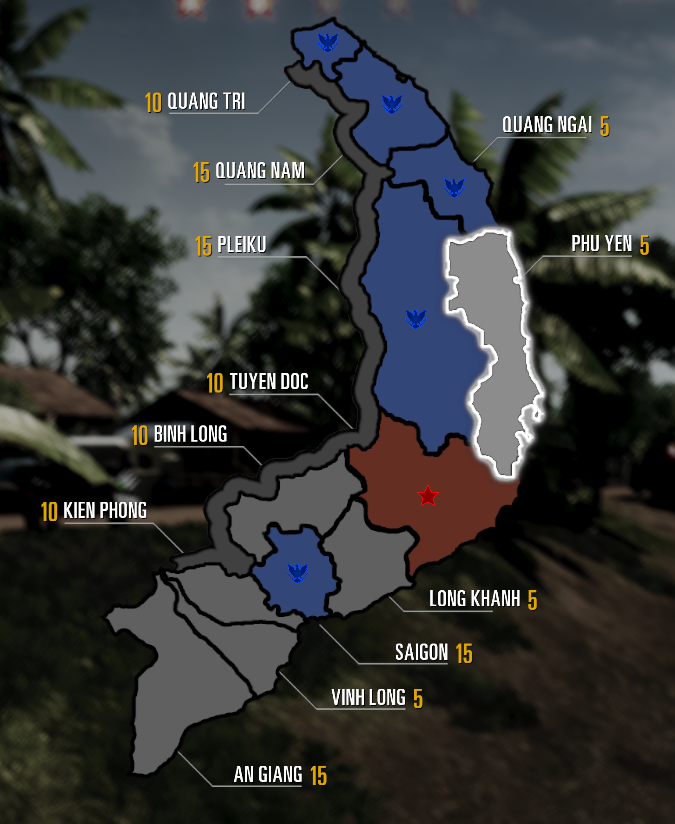 There are Combat power and Victory points.

Combat power is amount of points that allows you to attack or defend. Attacking or defending have it’s cost in combat power.

Victory points is the sum of all the region’s points.


Each side of the conflict starts with one 15 point region, Southern forces with Saigon, Northern with Pleiku. Each team starts with equal amount of combat power.

After each round winning team can decide what to do next


You win the war when:

In order to win the war you need to capture some regions so you will gain more combat power each round to cover attacking expense.

When you are attacking region the amount of points it has matters. The ownership of region also matters.

For example attacking neutral 5 pointer maximum cost of attack will be 50 CP. Attacking neutral 10 pointer may cost you up to 100 CP. On the campaign map screen game will tell you the cost to attack and defend region. 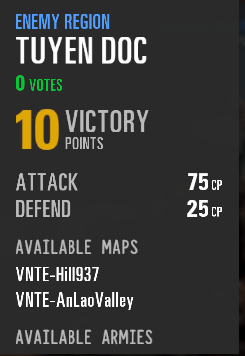 Your maximum cost of attack will be the amount game tells you multiplied by either 1x,2x,3x (accordingly 5pt, 10pt, 15pt). Maximum cost for attacking region from screen above will be:

The actual cost is calculated by multiplying max. cost by % of tickets used.

So let’s say you attacked above region and lost 50% of tickets. In this situation you will lose:

Winning or losing round doesn’t affect the cost of attack.

Sometimes campaign isn’t coming according to plan and you’re short on CP. Then you’re forced to defend because it’s cheaper. Cost of defending is less complicated than attacking cost. Maximum cost is always either: 25 CP or 50 CP.

Unlike attacking cost, defending cost is affected by loss. If you fail to defend your cost will always be maximum cost no matter how many tickets you lost.

Each side have it’s own special campaign ability. Attacking team can choose to activate ability. After using ability or after campaign start you have to wait 2 rounds to use it again (you can use it in 3rd round of campaign or in 3rd round after last used ability.

Factions are the matter of preference. I will give you some tips that can be helpful.

There are 3 stages of wars: Early, Mid and Late war. Each has it own set of weapons.

In early war most of the factions don’t have automatic weapons for Grunt/Guerilla. The only factions having them are US army and PAVN.

Many players vote USMC in early war and after that some players complain about not having M16s. USMC have some good kits (some even OP) in early war but overall most players will play grunt and most players prefer M16 over M14.

There’s no combat pilots and no spooky for southern forces.

For mid war all southern forces get M16s so it’s down to team preference.

For northern forces PAVN gets AKMs variant for AK, RP-46 (ultimate ratatata), SVDs and K-50ms but have less powerful arty for commander and has less weapons to choose from compared to NLF.

You can use HCMT commander ability no matter if you used HCMT or not.

In late war the only faction for southern forces is ARVN. They get 30rd M16s (it’s only way to use them in the game). They don’t get Garands though :((

NLF have AKMs and SVDs. The only PAVN-exclusive weapons are RP-46 and K-50m

This is all about Rising Storm 2: Vietnam – Campaign Mode Full Guide + Tips; I hope you enjoy reading the Guide! If you feel like we should add more information or we forget/mistake, please let us know via commenting below, and thanks! See you soon!