(Warning : May cause spoilers about objects you haven’t seen if you are new.)

Hello! This is a random guide that I decided to make because I was bored, so I made my own tier list of hostile creatures in the game.


This is only my opinion on some objects and if I do miss some details, please do tell me.

Who knows? Maybe this random “guide” could help someone. 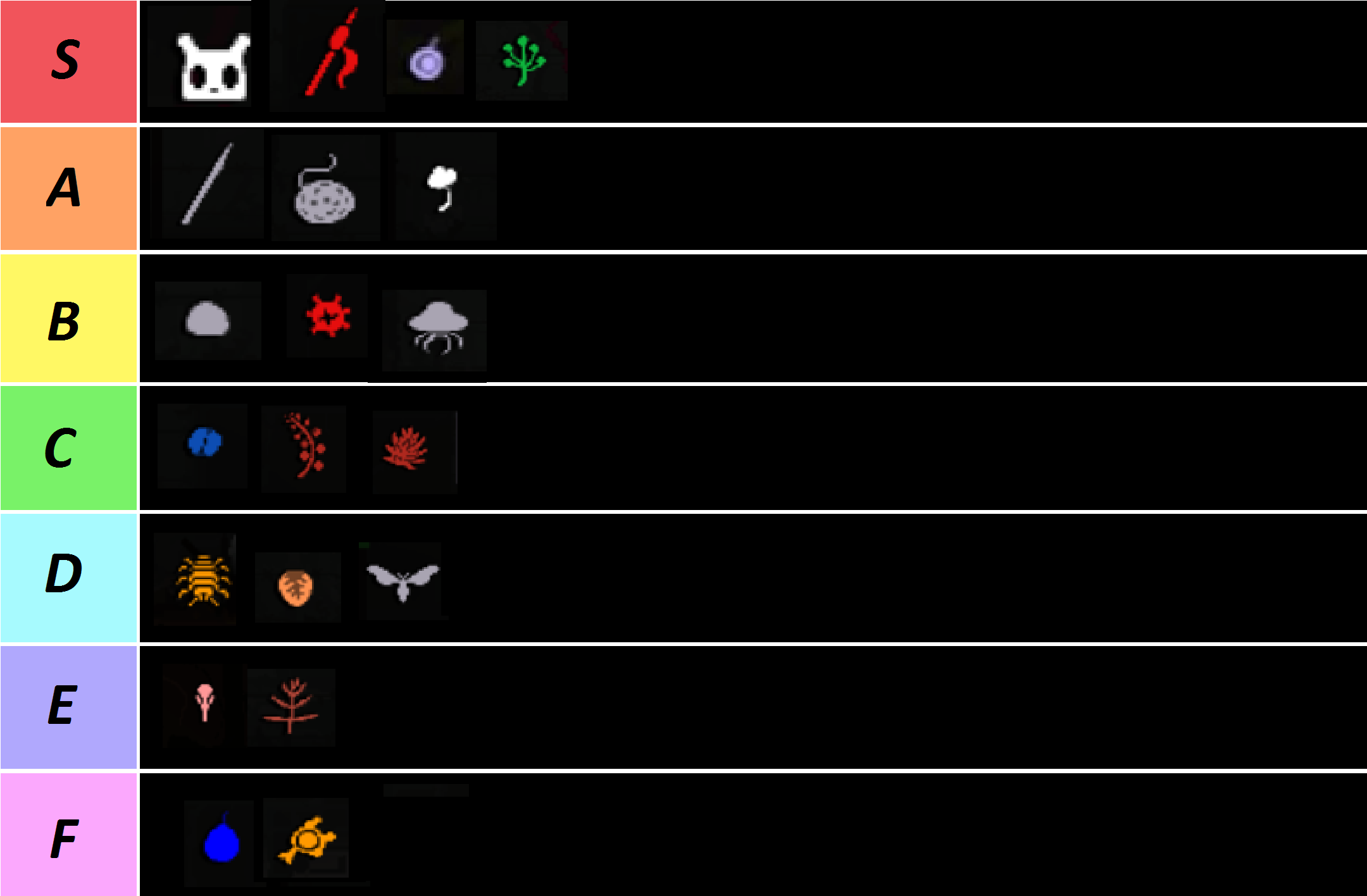 The best items that could help you a lot or food that is good.

I only put slugcat as a joke in the S tier because every predator likes to eat us.

Explosive spears are great to kill bigger predators but harder to get if you don’t want to be involved with scavengers. They start to explode when thrown and be used to detonate bombs on the floor or on scavengers. Can be found in scavenger dens or dropwig bait.

Flashbangs are my favorite because it blinds creatures(and yourself for a bit) or to kill photosensitive creatures like spiders. They are used often too blind miros birds. Flashbangs can be found in dark areas like a subterranean and shaded citadel.

Bubbleweeds are a lifesaver when diving underwater. Running out of air? Bubbleweed has a great supply of oxygen. Bubbleweed saved me multiple times in custom regions with underwater rooms. They can be found near certain rooms with water.

Items that are extremely helpful in some situation.

Spears are something that uses all the time in the rain world. We mostly use it to climb up walls or to kill predators. we can find it everywhere unless you are very unlucky.

Sporepuffs have 2 purposes: Kill any kind of insects or lure a rain deer to your position. This is also very helpful if you need to get pa*s centipedes that are blocking the path or in need of a deer’s help. They can only be found growing in farm arrays.

Mushrooms makes time slow when consumed, this also gives a small boost to slugcat. This is very useful when trying to jump over impossible deathpits or to traverse through exterior.

Items that are used on certain situations.

Rocks are useful in situations with wall/pole climbing creatures, you can kill a white lizard and push it off the cliff with a rock. Rocks can also be used to distract creatures with high hearing senses such as mole lizards or DLLs. You can use these rocks to do a combo with the spear too by throwing a rock at a lizard’s face and spearing it(note that this does not work with a certain type of lizard). Rocks can be found anywhere.

Bombs are useful when dealing with many groups or strong creatures. This does not fully kill tougher opponents but it stuns them and gives you time to throw a few spears or to run away. These bombs can be found in scavenger dens or dropwig bait.

Jellyfish floats on water and doesn’t do much unless approached. If you touch their stingers, you get stunned for a short while or drown underwater if you get stunned over and over by other jellyfish. You can grab jellyfish off the water and carry it to land. When thrown, it shocks anything that touched it.

You can easily stunlock creatures with the jellyfish and kill them but it will take a long time (just be careful not to get shocked as well) or you could just eat the jellyfish for 1 food pip. They can be found in shoreline.

Items that help if you know how to use it properly.

Bubblefruits act like normal rocks when they haven’t popped yet and can be used to defend yourself if there is no choice. They can be eaten once it popped, it pops only when it enters water. Can be found near rooms with water.

Cherrybombs are useful to scare away lizards or to deafen creatures. That’s all they do. I don’t know what else to say about it. They can be found in some regions: Outskirts, industrial complex, etc.

Beehives are tricky to use but easy if you know what you’re doing with it. You can use this to hold a creature in place like being stuck in cobweb. Do not throw the beehive if you are near unless you want the bees to attack you as well. You can only get these by throwing a sporepuff before grabbing it off their stem. They can be found in farm arrays and garbage wastes.

Items that are only used if you really need it.

Baby centipedes can be used as food to lizards or you. It gives 2 food pips and can be used to tame lizards. Just make sure it’s dead otherwise it will try to shock you to set itself free from your grasp. Some can be found near bigger centipedes.

Lanterns are a good light source if you don’t have the ‘glow’ yet. It can keep you safe from small groups of spiders but not bigger spiderpedes and can be used to see where you are going. You can get one by trading or stealing from scavengers.

Batflies are only food source for slugcat, squidcadas and jetfish. You have to try and catch batflies if you need to eat. They give you 1 food pip. Sometimes they are annoying, they approach and land on your hands as if you are a princess even when you are already full. They do have other use tho. You can do a glitch with the batflies to carry heavy creatures(alive or not) to pipes with you. I used this glitch to carry dead red lizards to my shelter (don’t ask why I was trying to kill red lizards).

Items to use if you are really desperate.

Noots are often found near their mother. You can try to catch them and eat for 2 food pips but watch out for the mother. If she sees you near it’s dead child, you’ll have to run or kill her. You can catch a noot and throw to a nearby creature to fool the mother into thinking that creature killed it’s child.

Noots are very fragile, so they die immedietly when you grab them. They can be used to feed lizards as well but it often glitches off the ground when they try to bite.

Batnips don’t do much other than attract batflies near them. You can use these if you are too lazy to catch batflies on your own.

Items that don’t do anything other than being food.

Bluefruits are considered fruit even if you bring one to ‘someone’, she says that it is a pupa of an insect. This only gives you 1 food pip can be found dangling from ceilings or as dropwig bait.

Slime mold can be found growing in dark areas. It gives you 1 food pip. Doesn’t do much.

Thanks for reading this random guide I made.

I didn’t add other objects like popcorn plant because I can’t find an icon for it to add to the list,

could be an S or A. It gives unlimited supply of food until end of cycle.

Hope you enjoy the Guide about Rain World – Objects and Food Tier List Guide, if you think we should add extra information or forget something, please let us know via comment below, and we will do our best to fix or update as soon as possible!