This guide is focused on playing with friends casually and mostly on character creation & this guide is not to tell you the BEST Traits to pick but more so what to take and not take for your build. I think unique builds are pretty great but there’s certain Traits new players should definitely avoid for an enjoyable experience. And this will be coming from someone who played PZ before he had a steam account and often plays with degenerates in general.

So this guide is focused on playing with friends casually and mostly on character creation & this guide is not to tell you the BEST Traits to pick but more so what to take and not take for your build. I think unique builds are pretty great but there’s certain Traits new players should definitely avoid for an enjoyable experience. And this will be coming from someone who played PZ before he had a steam account and often plays with degenerates in general.


First on world generation i would really recommend setting Zombie transmission to NONE. 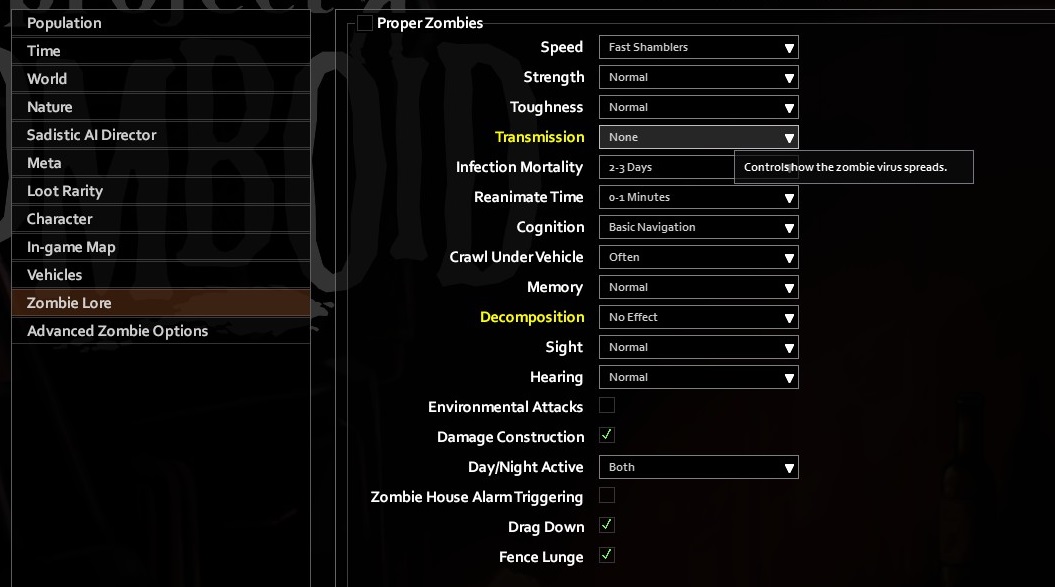 Some people may be mad and think this is a cop out. but new players don’t need infection to get themselves killed. And idk about you but when i play with my friends i become less tryhard and more Degenerate, And don’t forget that your friends or you will be playing with ping and possible server hiccups and getting infected due to ping is very frustrating.

Also i like to turn off zombie decomposition to keep zombies dangerous even later in the game. Though i think the effects of decomposition are still up for debate.


Anyway so about the Traits.

Illiterate – Honestly if you don’t plan on being a Support Character and want to go full Fighter this is not the worst pick. not including reading books in multiplayer can take awhile. You could also replace this with Fast Learner for a 30% EXP boost.

Overweight / Underweight – Good traits for 6 points because these traits can be removed overtime with weight gain/loss overtime but don’t underestimate the penalties, If you make a very weak character in order to have great support skills your likely to die and end up losing the skills anyways.

Cat’s Eyes – you cant sleep currently in multiplayer so you may be out at night a bit more then usual making it easier to see, also gives a very small buff to foraging.

Keen Hearing – Increases your awareness, (making the circle around you where you can see zombies larger) definitely helps newer players from getting attacking from behind (which has a high chance to get bit).

Stout/Strong – Not really underrated but i do think being strong is really helpful for new players. Helps shoving zombies and generally helps from being overwhelmed.

Lucky – 10% bonus chance for rare loot, +5% chance for repairs, And decent foraging buffs. if you take this perk make sure to loot after your friends, You may see loot they can not.

Smoker – Popular perk though im not a big fan of depending on ciggies.


Traits To Be Weary Of


Very Underweight/Obese & Weak/Unfit – these will get you killed, Especially Obese,


High Thirst – You need twice the water to survive, Not a bad perk but can become an issue real quick if you don’t have water. Wouldn’t recommend for new players.


Clumsy – Only gives 2 points, Makes your footsteps 20% louder and a 10%+ to be tripped, late game this prevents you from being super stealthy, But mostly tripping is VERY LETHAL.


Conspicuous – Although i often take this perk, its rather Harsh because it makes you 100% more likely to get spotted. if you are new to the game i would really recommend not taking it, it can make it really hard to lose zombies. Not horrible perk for fighters.


Disorganized – -30% capacity in inventory/car/storage, Generally not worth the inconvenience.


Deaf – This perk is not only debilitating but also hampers the games experience by not having sound.


All Thumbs – DO NOT TAKE LAMO x4 inventory sort time.


Agoraphobic/Claustrophobic – these are really bad vs cost and will make you panic a lot, Will also make your game very interesting lol


Hemophobic – This perk use to be basically free points but now it causes panic Very easily when you are covered in blood, requiring you to wash alot so be aware.


– Generally try to only have one weapon Bonus, And i would Recommending getting one.

– Fighters will probably want Long blunt or Axe you get extra damage & knockback and often Multi hit, Short Blunt is not too bad though because it only takes one hand leaveing your other hand free.

– Spears also have a one hit ability that is a charge and its durability depends on your carpentry skill.

– Short blade can be scum repaired, you can make a spear with a blade attached to it then remove the blade to reset the repair counter (each time you repair a weapon it gets less effective to repair said weapon) so this can make hunting knifes and knifes more reusable.

– Dont make a super weak & defenseless support character, you have to survive to be useful lol.

-Exertion weakens melee starting from -50% to -95% And also has a long list of nasty debuffs. Avoid fighting when Exerted.

-Heavy Loads – Carrying too much also comes with alot of debuffs so be aware.

I hope you enjoy the Guide we share about Project Zomboid – Casual Character Creation Multiplayer Guide; if you think we forget to add or we should add more information, please let us know via commenting below! See you soon!