This guide’s objective is to a*sist players in maximizing their use of Boxy Boo and its capabilities. This guide will give you the information you need to turn him into a formidable adversary, even though he is frequently considered a coward.

Because of his skill set, you must approach fighting him differently than any other monster. Because of this, many people believe that Boxy is a weak character when they don’t play to his strengths. Out of the three monsters, Boxy Boo is the one with the most power. I do not doubt that he can become nearly unbeatable with sufficient training. 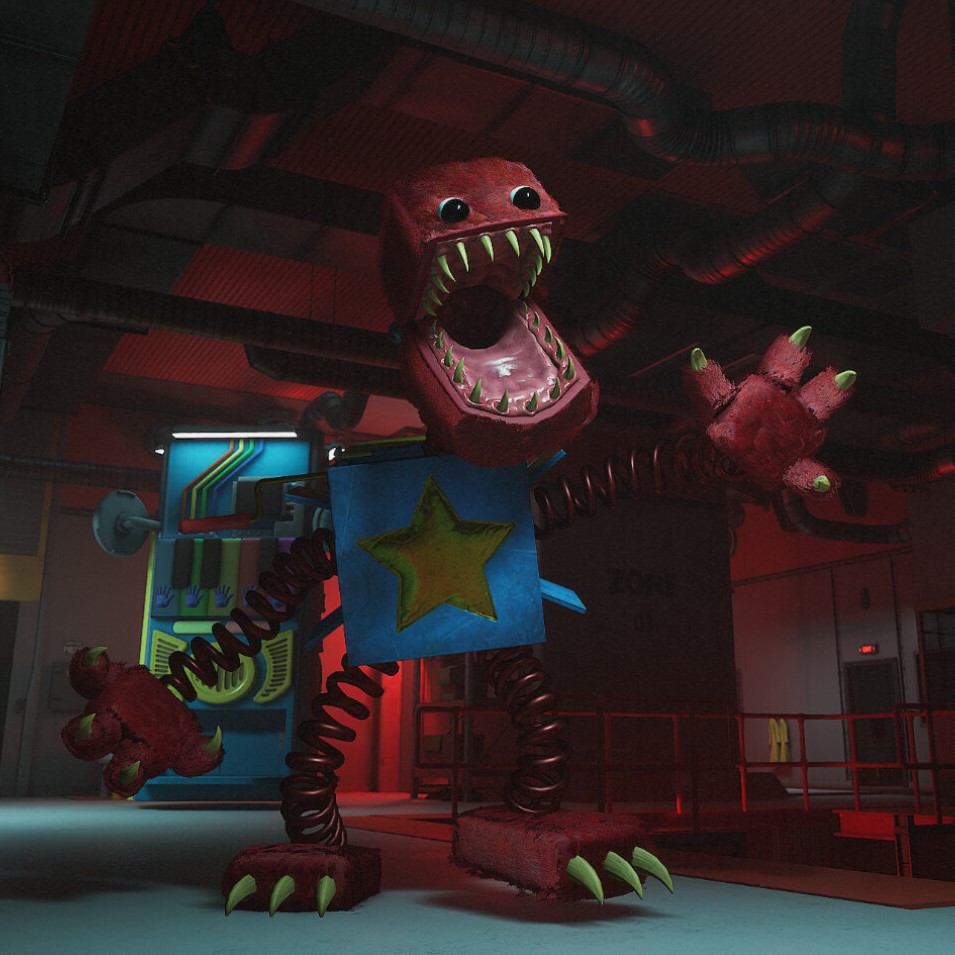 Let’s first look at Boxy Boo’s abilities and his kit. These will be crucial to get the most out of Boxy Boo. This section will discuss Boxy Boo’s pa*sive abilities, which are always in use without input.

Boxy Boo can jump higher and fall slower than normal monsters, but he does not actively do so. This allows him to scale most small obstacles, such as the railings at Toy Factory and Theater’s stage ledge and other difficult areas. This pa*sive alone allows Boxy much more freedom when moving around the map. Survivors can easily be taken by surprise at how fluid his movements are.

Boxy’s attack is also different from other monsters. His attack does the most damage, but he also attacks very quickly. This makes it extremely effective against survivors who are not caught off guard. They’re likely only one hit away from death when they realize you’re behind them. It’s also great for opening locked lockers. These take four hits from any monster, but Boxy’s faster attack speed allows him to search lockers at record speed.

But that’s not all…

The Other Pa*sive – Music Box

Boxy is a music box and plays music only he can hear. Boxy’s music is a proximity meter, meaning it gets louder and faster as he gets closer to survivors. Boxy can go completely silent if he does. The area you are in is empty of puzzle-doing geeks.

Boxy’s second, less obvious, component is that he hides in his box when crouching. This makes him difficult to spot. This, combined with the music, makes Boxy a very destructive camper. You can hide in a corner and wait patiently while you listen to the music to get closer to an unaware survivor to rescue them. Your quick attacks mean they are dead when you get to them.

This section will cover Boxy Boo’s active abilities and their functions. These abilities are essential to Boxy’s success, so take notes.

This ability is bound by default to Shift. After a brief wind-up, Boxy leaps forward into the direction you aim for, going faster and farther the longer you charge, until it reaches a maximum.

This ability does not have a cooldown, so use it often to enjoy its incredible mobility.

This ability is automatically bound to your right mouse click (RMB or). Boxy extends his right claw as far as he can, reaching for the first survivor it touches and pulling them towards him.

Survivors will not be hit if they are rolling, and the grab will stop if they are pulled into an obstacle.

This ability has a short cooldown, so make sure you use it frequently to chase down survivors as fast as possible. You can usually hit a survivor only a few times before they run to the range after a grab.

Boxy Boo believes speed and strategy are the key to success. His greatest strength is his mobility. Taking advantage of this will make it much harder for survivors to deal with him. Although you can’t be anywhere simultaneously, you can get close.

Boxy’s LeapA emits a distinct sound when it goes off. Survivors will run if they hear it. It’s best to charge your leap from outside a survivor’s hearing range and then use the distance from a good jump to get the drop on completely unaware enemies.

This is especially useful for Theater – [youtu.be]

– Jump once from the stage to reach the garbage pile. Then, jump again to reach the balcony seats. You can then charge your Leap at top of stairs and ambush survivors on the puzzle pillar to your immediate left. You can also attack the
Map’s many openings – [youtu.be]

Surprising survivors will be rescued.

Toy Factory’s key is height. If you are not nearby, survivors rarely look up.
Many of the roofs can also be jumped onto for a great vantage point. [youtu.be]

Take a look at the map to find potential targets. This is especially useful for the puzzle pillars out in the open.
right – [youtu.be]

Sides of the map can be used, and the rooftop between them can jump survivors before they can register the behemoth that appears to have appeared next to them.

Boxy’s GrabA is a powerful tool that prevents survivors from using the map’s crash doors. This is its greatest strength. Uncaring survivors can be killed.
Pull them as the door closes, and place them back on your side.

You will cut off their only escape route, leaving them helpless to flail as you smack them to the ground. The survivors need to be very careful and time their roll, so it allows them under the door and deny you grab. This isn’t easy, depending on how close they are.

It is possible, but timing is a bit more difficult. If you grab the survivor while they’re swinging across a pit, they will hold onto the grappling points and be able to swing across a second. Boxy’s high jump and ability to scale them quickly make grapple pits not a problem. However, it is a waste to grab them for no reason.
Wait until they release the grapple, then fire – [youtu.be]

You can yoink them back into your arms and most likely strand them in the pit they were trying to swing across, trapping them and allowing you to attack freely.

When you try to grab a survivor, make sure you have a clear path. Boxy will stop pulling the survivor he grabs the moment his claw meets any obstacle, no matter how small.

There are eight different Sabotages for monsters. Some are better than others. I will rank each Sabotage based on the value Boxy Boo gets from it. Disclaimer: This is solely my opinion.

This is my favorite Sabotage option for Boxy Boo. It is extremely easy to use because the effect lasts until (. This means you should use it as soon). It also helps Boxy in two areas: Damage and long-range info. Boobytrap helps to soften Boxy’s enemies. This reduces his damage and makes them less likely to fall to the ground. The exploding puzzle columns give you a way of finding survivors from a far distance, which Boxy lacks in comparison to Huggy’s mini-Huggies or Mommy’s wallhacks. With his superior mobility and close-range tracking prowess, Boobytrap makes Boxy a formidable force.

The shutdown is a great Sabotage for all three types of monsters. It provides a free slowdown and allows you to save time to stop survivors from completing puzzles. You can also camp a breaker in your box form to surprise an uninformed survivor. It’s not the best, but it is still annoying to deal.

No Pack is, quite simply, a worse version than Shutdown. It does not prevent them from using crash doors or grapple points. However, it can be repaired on the spot and lasts longer than Shutdown’s breaker-based withdrawal. The shutdown is better, though it’s not the worst.

It may seem odd that this Sabotage is ranked so high, but it does help in one situation. Boxy’s mobility allows him to get the drop on survivors who don’t look at him. However, survivors can still see Boxy approaching and run away accordingly. Living Nightmare solves the problem and ensures survivors will not be distracted by your approach while you charge up your leap.

Boxy is a valuable Sabotage on our monster brother Huggy. However, he lacks the lethality or snowballs potential to make Feeding Frenzy a worthwhile investment. Although Boxy is able to move without difficulty, Feeding Frenzy is too slow to use over higher-ranking options. It is generally not worth it, but it is better than nothing.

No Escape is often redundant on Boxy Boo because he can easily invalidate crash doors or grapple points without it. This is combined with the fact that he can search lockers extremely quickly. Although all aspects of this Sabotage are not compatible with Boxy’s kit it can still be useful to fix a mistimed grab by opening a crashdoor back up.

This Sabotage can either be a blessing or curse depending on the map and whereabouts. While some areas are dependent on the crash doors being open for escape routes, this Sabotage can work against you. It traps you outside of vital areas, forcing you to use a less efficient route to reach a survivor who is working on a puzzle. This is particularly dangerous at Toy Factory. It creates a lot of tiny boxes with only one or a few entrances, making it even more difficult to navigate a map. Use this tool only if you have a unique, clever strategy in mind.

Directionless is a poorly designed Sabotage that does nothing to survivors who have played the game for more than 10 hours. Map knowledge will allow survivors to continue without worrying, as the Sabotage does not obscure the train, puzzle columns, or toy parts. None of these are particularly unpredictable when it is about location. Although you’ll destroy the children who downloaded this game for the love of Poppy Playtime it’s not like they really need any help. This is the worst of all the games.

Conclusion: I believe that Boxy Boo is a powerful and untapped resource that has yet to be tapped by most people. I hope this guide has encouraged you to use Boxy Boo in your next game of monsters. With my advice, I’m sure you’ll be successful.

Thank you for reading!

Hope you enjoy the Guide about Project Playtime – Boxy Boo Gameplay, if you think we should add extra information or forget something, please let us know via comment below, and we will do our best to fix or update as soon as possible!