This tutorial will show you how to host dedicated servers that are used for the original Portal 1 game.

Portal 1 can host servers and allow players to play multiplayer games together, even though it is a single-player game.


However, multiplayer gameplay has not been possible since Portal 1 was launched. Portal 1 multiplayer's passing portals would crash the game and it can't be played normaly in the past for very long.


Valve recently updated Portal 1 in early 2022 and fixed some Steam Deck controls/UI stuff. This update also included a surprising thing. This is the solution to the problem of passing portals being crashed, and the long-term multiplayer problem is now being fixed .


Some people might want to play Portal 1 multiplayer. How do you host a server?

There are two options: Host from the ingame console and host from a dedicated server tool


The first is the most popular and easiest. The second is a bit more difficult.


Remember, this game is not designed to be played in this manner. There will be a lot of bugs when playing multiplayer. We recommend cheating on (Sv_cheats 1 at all times.


If the host has done Port Forward, the servers should appear on the public category. If not, other players may need VPN. (like Radmin, Hamachi.. etc) Search in the local/LAN category or call connect IP

How to play Portal 1 Multiplayer (Tutorial)

You can download the following links as a reminder: Portal Dedicated Server / Portal 1 Maps / Multiplayer Menu Buttons In all video descriptions.

(, because Steam page doesn’t allow you to post a URL right here)


* The tutorial video above contains all the steps/tutorials. You can either watch the video or scroll down to see the steps.

Tools and Softwares You Need

Also, if you don’t "disconnect" your console server first, the game won’t let you host it. So you should disconnect first. (But I'll show you how to make sure that the game doesn't disconnect every time you start it later)

1. Download SteamCMD first, then run steamcmd.exe to start it up. Let it download the files you need.

2. After you are done, go to the internet to search SteamDB page of the HL2DM dedicated server. The AppID is 232370. 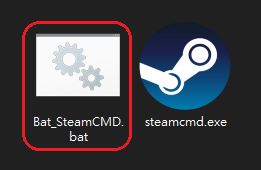 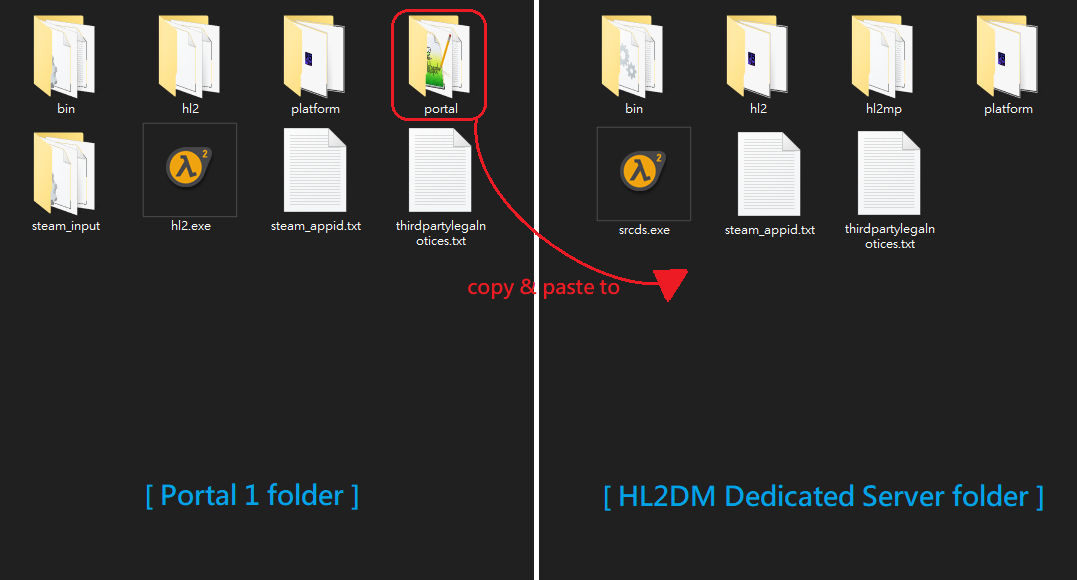 4. After downloading the HL2DM Dedicated server, copy all Portal contents from Portal/portal/ and paste it into your server folder. The (portal folder should be placed alongside hl2, and hl2mp, as well as other folders) 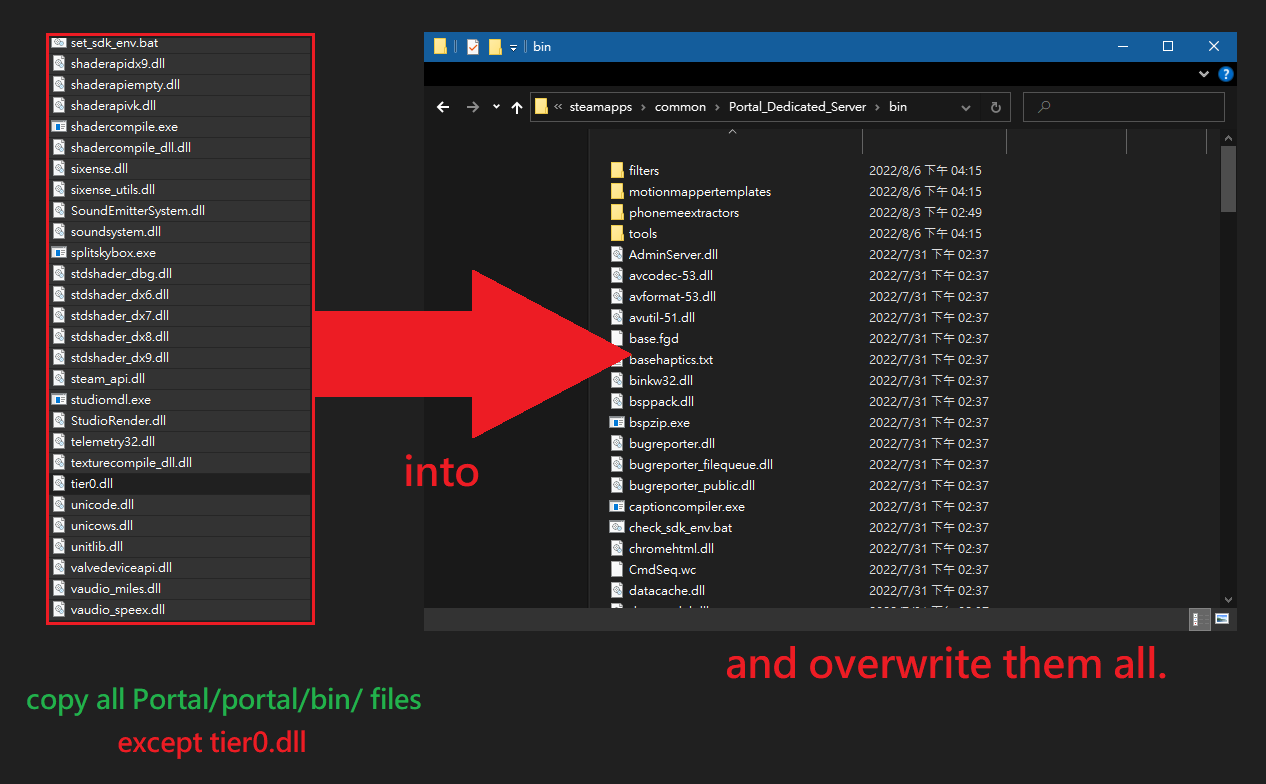 5. Copy all files in Portal/bin/ except tier0.dll and then paste them to bin/ in the server folder.


* NOTE: The GUI of Potal Dedicated Server can sometimes not work. It's recommended to keep the -console parameter set in the server.bat.


* OPTIONAL 1: There's a command line -exec "file.cfg" which can execute the cfg files within portal/cfg/. In the server.cfg, you can set things like server name, passwords, and other server-side CVar stuff.


* OPTIONAL 2 – you can change the game name that show on the server list, by editing [Your Server Folder]/portal/bin/server.dll (using HxD or other coding softwares), search "Half-Life 2" text and replace with "Portal".

For other players to join a server

To join the server list, type connect IP or click on the servers to open a console window.


* NOTE: The command gamemenucommand openserverbrowser may be used to open a server browser.

Q1: Why do pick up turrets cause the game to crash?

A1: The coding stuffs issue. However, there is a 2018 leaked code to fix this problem. If you are a coding expert, you can merge/insert these fix codes into the current server.dll.


Q2: Why don't turrets react to players in multiplayer?

A2: This problem is not known at this time. To fix it, first load singleplayer maps with turrets, then disconnect and then host the server. Turrets should then be normal.


Q3: Why are there no player names in the chat room?

A3: This is also a problem with coding, but the SourceMod / MetaMod plug-ins can solve this.


Q4: Why does the first person shake so much when approaching portals?

A4: Although the cause of this problem is not known, you can fix it by entering -console into Portal 1's Steam launcher Options. This will allow the game to stop loading the background map when it starts. (background should not be blurred) .


* NOTE: Some people claimed that sv_maxupdaterate and cl_updaterate could fix camera shaking problems too. However, this only affects the host and not the clients. The launch option is the best.


Q5: Why does the original campaign from testchmb_a_08 and testchmb_a_14 crash every time you enter the elevator?

A5: Mapping problems. The game should not be played this way. Recommend that you download the maps made by me and my friend for multiplayer gameplay.


Q6: Is it possible to get HL2 weapons or spawn HL2 stuff like vehicles/npcs.

A6: Yes, but they crashed the game A LOT.


Q7: Is this possible for mods or other singleplayer-only Source engines?


Q8: Can I create custom maps such as Deathmatch, Coop or storytelling for multiplayer gaming?


Let's have some fun and try it!

[Tutorial] How do I install Portal 1 contents into Portal 2? – [steamcommunity.com] 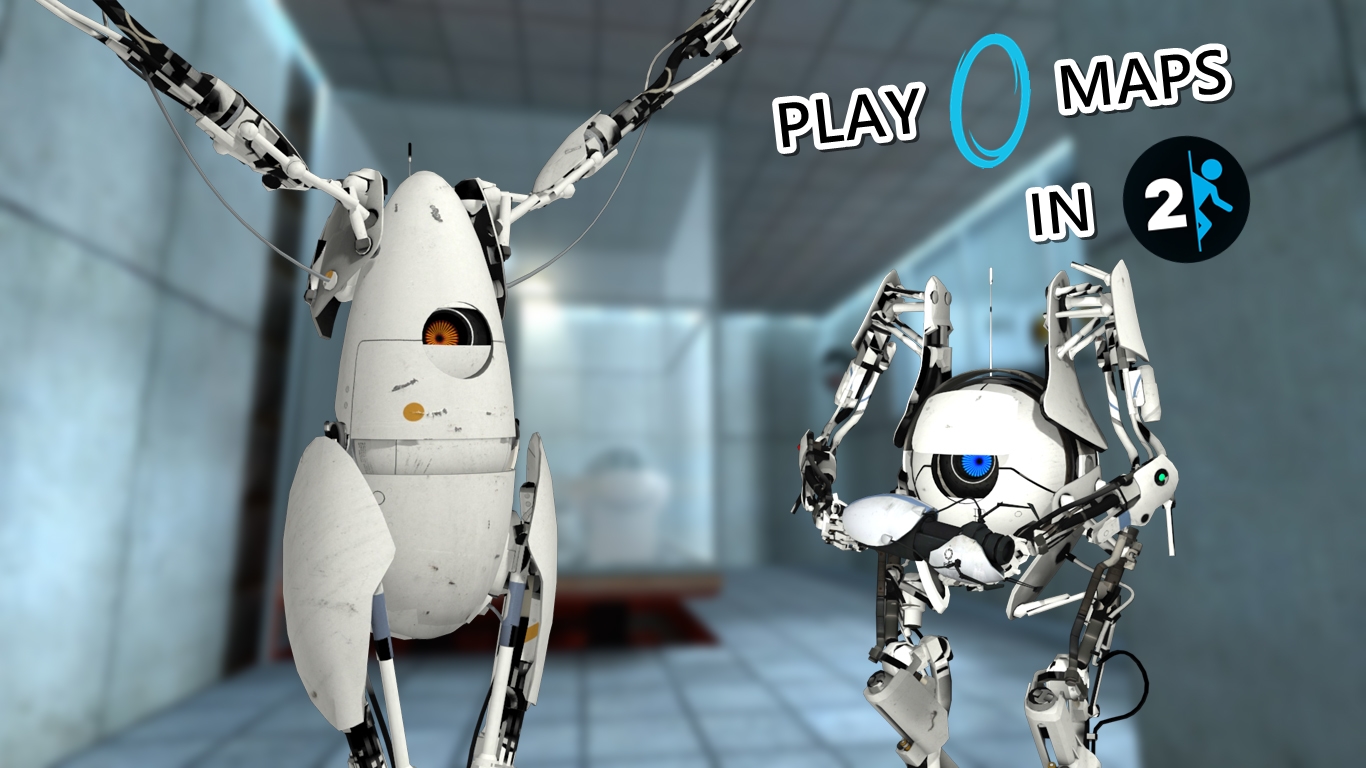 This is all about Portal – How to host dedicated servers video tutorial; I hope you enjoy reading the Guide! If you feel like we should add more information or we forget/mistake, please let us know via commenting below, and thanks! See you soon!