This guide was in my to do list for about 2 years but now I decided to finally do it! It will be a guide containing builds, equipments, and a brief summary for each companion.

It will have the following format:

Since I’ve done 4 companions (it takes a long time and lots of testing) I’ll open the guide for everyone. 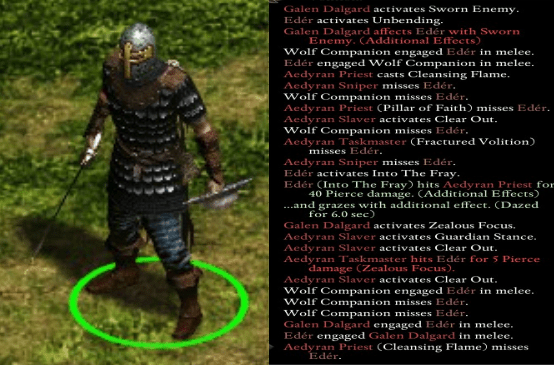 Éder is a cool companion banter wise and he’s the only one that can fill up the role of main tank (Kana absolutely can’t… don’t argue). The issue is… tanks are boring, they can only witstand damage and after that their job is done and you get stuck with a passerby amidst the battlefield. With that in mind I created a build that is a tank for the first 15 seconds of offences and after that he can do glorious damage. The Weapon of Choice: Resolution a fitting name for Éder… also there is one more equipment vital for this build, Cloak of the Tireless Defender, since the idea of this build is to witstand damage for 15-20 seconds this cloak works wonders with the fighter passive Constant Recovery… oh and also, use a buckler you don’t have the need for a big shield, just if you are facing a boss.

Level 3:
Disciplined Barrage
For the early game precisely because of this abilitie the fighter is one of the best dps

Level 5:
Vigorous Defence
Now your fighter is imortal for the first 20 seconds, just pop this abilitie in the beginning of the fight – where the enemies will charge you with all sorts of offences.

Level 6:
Superior Deflection
Deflection is the best bonus for the tank role, yes CON is only the second best, in fact you can create a tank with 3 CON and 19 RES and he’ll be a fine tank

Level 7:
Armored Grace
Éder’s armour is absolutely perfect and you should keep it for the entirety of the game, so by grabbing this skill Éder will attack like he’s using a cloth armour, amazing

Level 9:
Into The Fray
Now… this abilitie is brilliant, an interrupt and great damage done in an instant, I don’t know why other guides don’t mention this, yes… the pull hardly works but if you use this only for interrupts it’s amazing

Level 13:
Unbending
Now our fighter is invencible for the first 20 seconds of the fight, only dragons can kill him and some monks in the DLC…

Kana is my favourite companion, his stats are simply wonderful (only losing to Sagani) and he has a jubilous personality not to mention he’s one of the few companions that have an unique dialogue for some places, you can actually ask him if he knows about the vicinity!
Since PotD is rather difficult this build is a hybrid between Summoner, DPS and controler, too much? Not for the Chanter class! The weapon of choice is: Borresaine it’s expensive but it’s worth every penny.

Level 2:
Weapon Focus: Adventurer
By now you guys know that I like accuracy

Invocation-> But Reny Daret’s Ghost, He Would not Rest
Life saver for the early game

Level 3:
Come, Come Soft Winds of Death
Keep in mind that you need to stay a bit close to your enemies for this to do damage

Invocation-> White Worms Writhed in the Bellies of the Dead
Brilliant damage, just keep in mind to use this in the mid or end of the battle

Level 5:
Sure Handed Ila Nocked Her Arrows with Speed
The chant that makes Kana a good dps, more speed for your shots, Sagani will also benefit

Level 6:
Penetrating Shot
Quite important at this stage of the game

Invocation-> At the Sound of His Voice, the Killers Froze Stiff
After this you’ll have a hard time ordering Kana to do anything else other than scream this invocation

Level 7:
Dull the Edge, Blunt the Point
To be honest you will never use other chant just Sure Handed Ila and another level 1 chant, so these are just random picks from now on

Invocation-> My Son, Do you See your Sisters Across the Moor?
Important for the PotD difficult, if you want you can pick something else

Level 9:
Punch your keyboard, pick up the key that flew away, choose the chant with the same initial letter repeat the process if necessary

Level 10:
Secrets of Rime
You can lash your Borresaine to do Ice damage, but this talent is for your next level

Invocation-> Oh, But Knock Not on the Door of Urdel and Gurdel
And there you have it! The best skill in the game, summon two Ogres to aid you in battle

Invocation-> Seven Nights She Waited While the White Winds Wept
You’ll shot your adversary until you get 5 chants, use to summon the two big boys, then when you get another 5 chants you’ll cast this and do tremendous damage. Perfcetion

Invocation-> Rise Again, Rise Again, Scions of Adon
It can save you from reloading the save after a half wipe
You’ll never use this, but it’s a good buff, so why not?

Level 15:
With all Your Strength Slay the Beast
This is the only exception for your chants, you may actually use this! Against Dragons only

Level 16:
Mental Fortress
Keep Kana at your side of the battle

Invocation -> Anything
Sadly you’ll never use this

Sagani is the best companion in the game – stats wise -, but the hunter is not the best class in the game, especially in the PotD difficult, you see… Ituumak (Sagani’s pet companion) can do a tremendous amount of damage but he will keep getting knocked out in battles specially after level 11-12 when micro management gets rather difficult, so I decided to make a control/dps build. This build will follow the Great White Hunter from nerdcommando’s guide but with some differences and after level 11 it will be mostly my build. The Weapon of Choice is the fantastic: Persistence.

Level 2:
Resilient Companion
So that your ravenous fox don’t get killed in matter of seconds

Level 3:
Vicious Aim
nerdcommando made a really good case to use guns in the early-mid game and he explained really well why he made that choice I’ve tested and it works, it just works

Level 6:
Penetrating Shot
Again, nerdcommando can explain this better than me

Level 7:
Heal Companion
Personal choice, your pet keeps getting knocked out cold in PotD so I selected this brilliant abilitie and it was a good move, now my pet can survive all skirmishes and almost survive battles

Level 8:
Weapon’s Focus: Ruffian
Because Sagani has amazing stats we can delay this accuracy boost

Level 9:
Predator’s Sense
Ituumak best damage boost, in order to activate this you need to put a dot on your adversary, just use Wounding Shot and because Sagani has a good amount of INT it will proc even more, now you will see your angry fox doing 60+ damage

Level 13:
Twinned Arrows
Now you can stun 2/3 of the enemy party with each shot

Level 14:
Strengthned Bond
More defence when your pet is around you

Level 15:
Heal Companion
So many abilities are tied to your fluffy fox so keep him alive

Level 16:
Bloody Slaughter / Outlander’s Frenzy
Both choices are fine and will boost your damage, if you are more of the RP type you can go with Bloody Slaughter because Sagani screaming like an angry maniac is not part of her personality

Sure… Pallegina don’t have the best stats in the world but she has one of the best classes in the game, the Paladin.
The Paladin’s abilities has such a tremendous assault power that they hardly need stats and since a numerous amount of such abilities are fire based I’ve decided to create a build englobing this idea.
The most important aspect of this build is it’s weapon of choice, the Belt of the Royal Deadfire Cannoneer or the Forgemaster’s Gloves – until you don’t have enough money for the belt -, it’s, essentialy, a Great Sword made out of fire and keep a Pike with fire lash at your side if you encounter an fire proof adversary, the Tall Grass is a good choice when you have the money.

Level 2:
Weapon’s Focus: Soldier
Pallegina’s stats are not good but at least she has a good amount of PER but I still enjoy more accuracy!

Level 5:
Sworn Enemy
This little abilitie will be your boss killer or the enemy that is giving you trouble killer

Level 7:
Zealous Focus
You must hit to make damage

Level 8:
Scion of Flame
Damage modifier to any fire damage that you produce including your fire sword, brilliant

Level 9:
Inspiring Triumph
Since it’s a damage dealer build you should K.O. a large amount of opponents thus this abilitie makes sense

Level 11:
Healing Chain
Even being a dps this abilitie is so good that you can afford the trouble to cast

Level 13:
Sacred Immolation
Your panic button. Are you surrounded by opponents? Press this button and watch they melt, literally

Level 14:
Bloody Slaughter / Mental Fortress / Body Control
The first one if you want more dps the others if you want defence

Level 15:
Righteous Soul
After all this trouble just imagin if your enemy can just charm you

By reading this guide you will notice that my companions lack armour and this is intended, dps suffer a lot because of armour so I tend to keep it at a minimum, ranged characters use normal cloths and front liners use padded armour or even less! The only exception is the main tank, you can put they in Plate armour but Éder don’t need one because of his armour and it’s glorious effect.

I hope you enjoy the Guide we share about Pillars of Eternity – Companions – a guide for your deranged party members; if you think we forget to add or we should add more information, please let us know via commenting below! See you soon!