A couple cool tricks to quickly track down the ghost’s evidence.

To keep this brief:

Over the past couple of days, I figured out quite a few cool things about new mechanics & techniques. Over the coming days I’ll update this with some more information. (Got some cool stuff on Sound Sensors & Motion Sensorrs)


For now, I’ll just put out a couple cool tricks you can use to detect the ghost pretty quickly, which is going to be very helpful for tricky ghosts or people that want to speedrun or do tricky challenges.


Anyway, have fun trying this out.

Detecting any piece of evidence, other than Fingerprints, always rules out the other.

If you discover Spirit Box? => No need to check for Freezing

If you discover Ghost Orbs => Cannot be EMF5

If you discover Ghost Writing => Cannot be DOTS Projector


This easily allows you to focus on the evidence you actually need, without constantly checking in the book what evidence it could be.

You can confirm any of the Non-Fingerprints evidences by ruling out its opposite and Fingeprints.

The reason this works:

Watch what happens when we rule out Fingerprints:

Now the ghost can only have evidence from mutually exclusive pairs. So ruling out any one evidence forces the remaining evidence to be the ghost’s evidence.


Ruling out Fingerprints and Spirit Box:

=> The Ghost must have Freezing.


This works for any of the 6 main evidences in its mutually exclusive pairs. Rule out 1 evidence and fingerprints => the opposite evidence must be part of the ghost’s evidence.

Motion sensors can be triggered by the player and the ghost.

However, the player and the ghost have different activation hitboxes!

Clever positioning can allow motion sensors that cannotbe triggered by the player, onlyby the ghost.


Let’s take a look at the height a ghost can trigger sensors at: 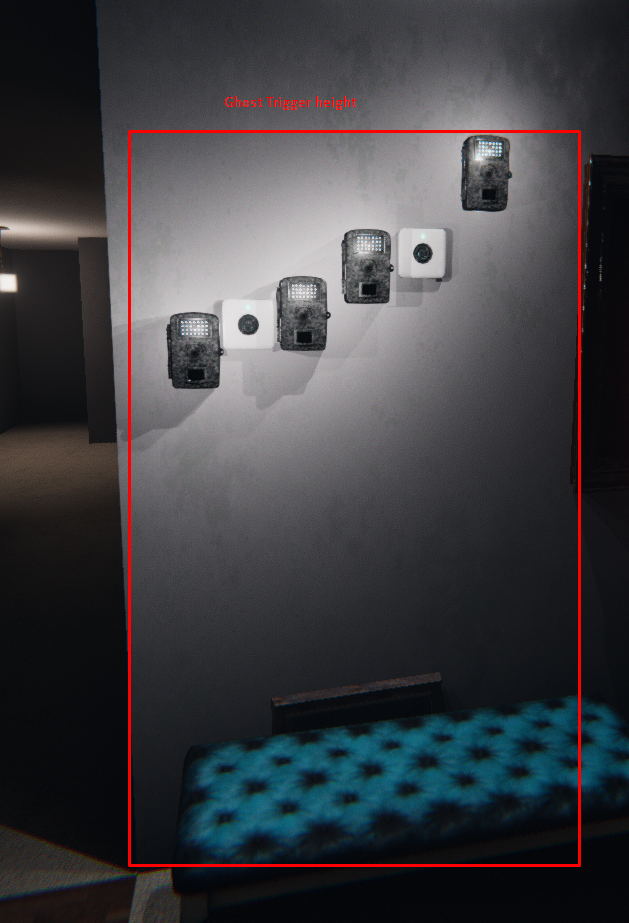 Ghosts can roughly trigger motion sensors up to this height. A good way to keep it in mind is to think of ghosts as doorway-high. Any sensor placed higher than the top of a door frame is not going to detect the ghost. 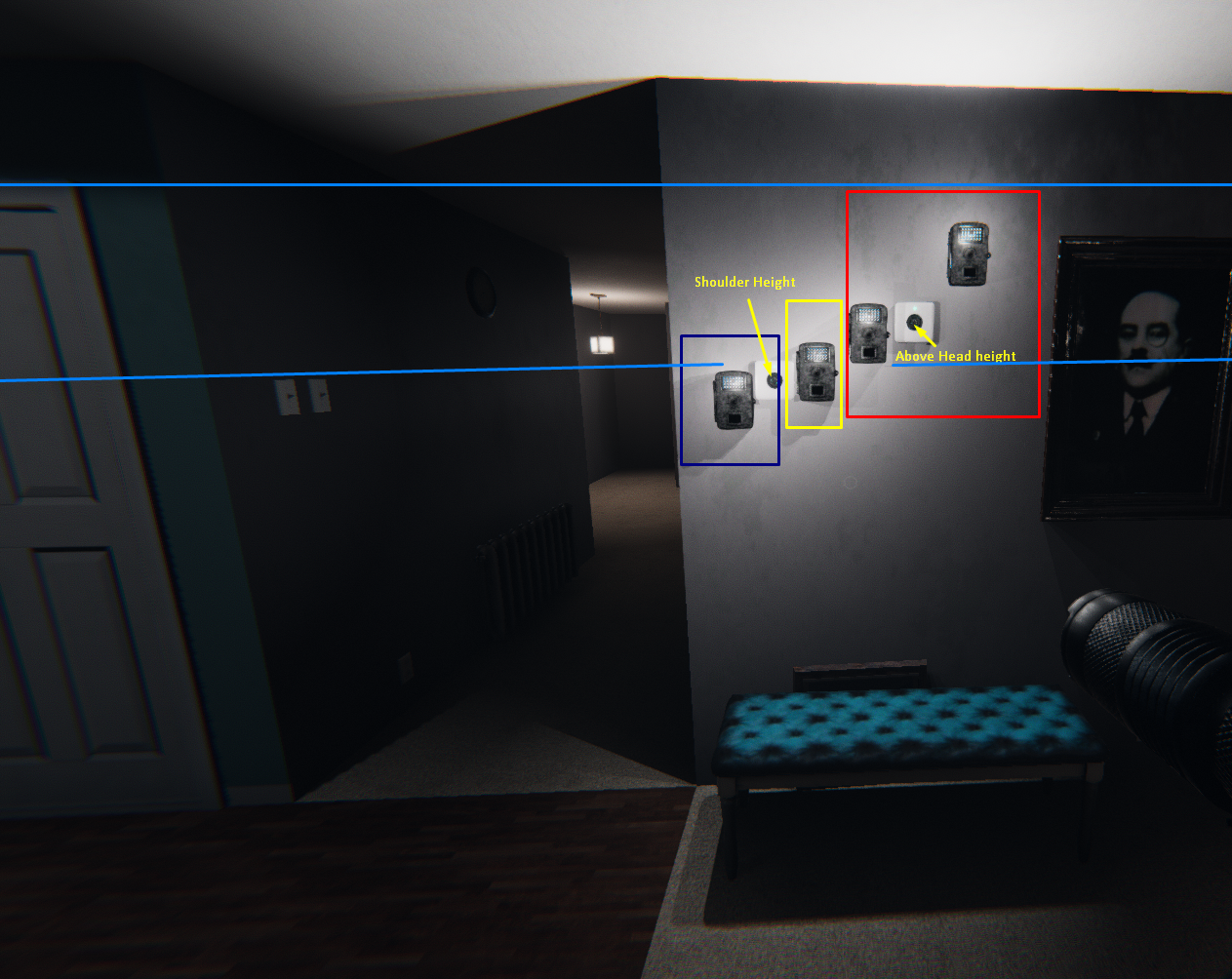 As you can see, all 4 motion sensors here have been triggered by the ghost.


In order to understand height placements, we need height references. The sound sensors have been placed as two height indicators.


Shoulder Height: This sound sensor was placed by walking up to the wall with the camera level straight ahead. It’s approximately on the height of your shoulders.


Above Head Height: This sound sensor was placed about 1 1/2 motion sensors above the shoulder height one, in such fashion that when standing in front of the wall, only the lower edge of the sound sensor is still visible.


The two pinkish lines are the cutoff lines. Anything placed above the lower line cannot be triggered by the player, only by the ghost.

Anything placed above the upper pinkish line is not triggered by player or ghost.


TLDR: Placing Motion sensors between the two pink lines makes them triggered only by ghosts.


Let’s take a look at the individual sensors: 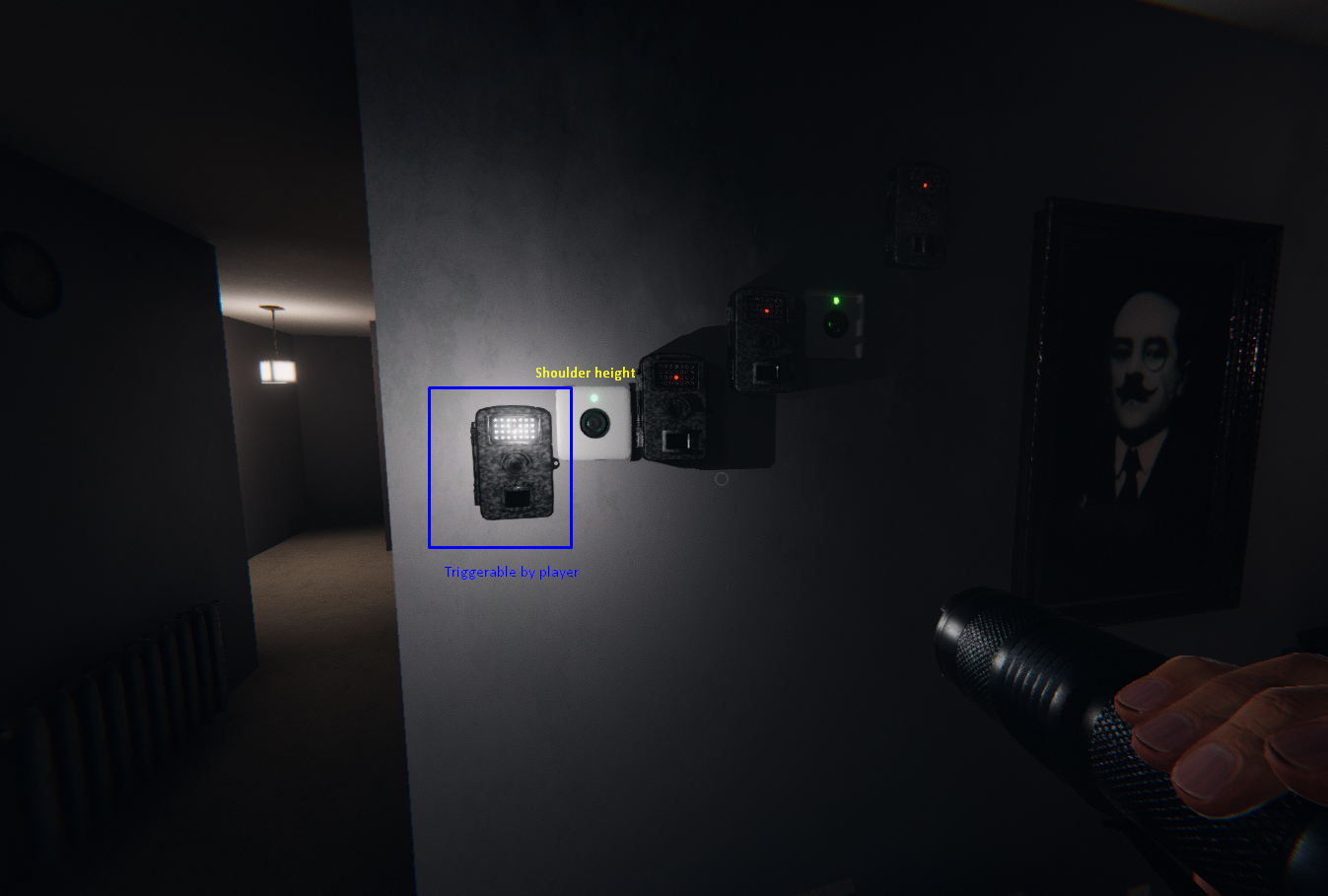 The framed sensor is slightly below shoulder height. This is the heighest a sensor can be to be triggered by the player and ghost (without special circumstances).


This is bad since you and other playerrs can trigger the sensor. 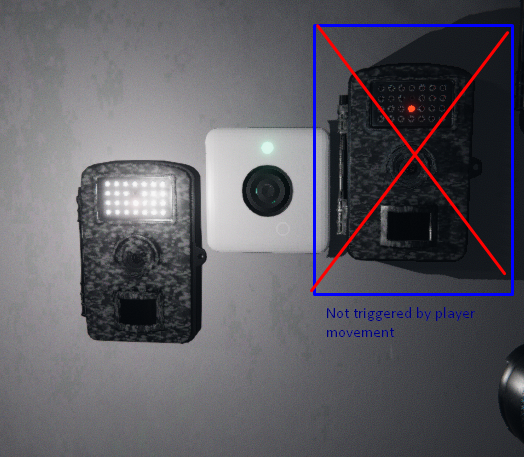 As you can see in this image, the sensor directly right of the left-most sensor is not triggered by the player, even though he’s right in front of it.


This is better but problematic. 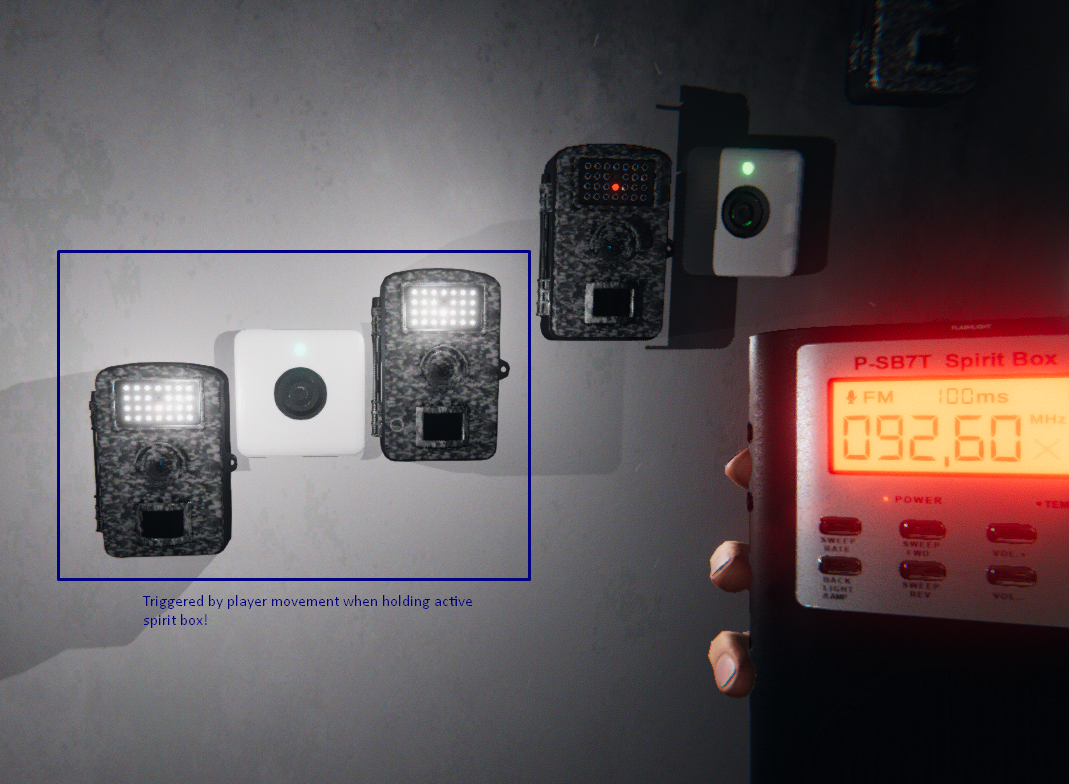 As you can see, holding an active spirit box and walking past the sensors also triggers the second one that usually isn’t triggered.


The two motion sensors on the right cannotbe triggered by the player, even when holding a spirit box. These are optimal placement positions. 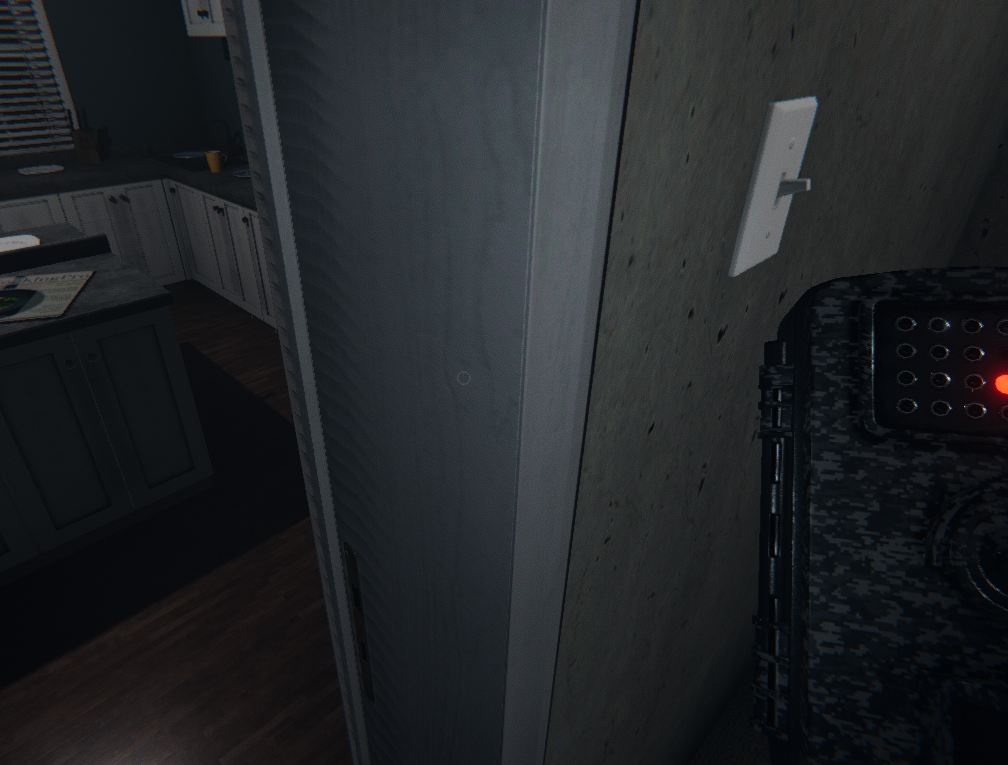 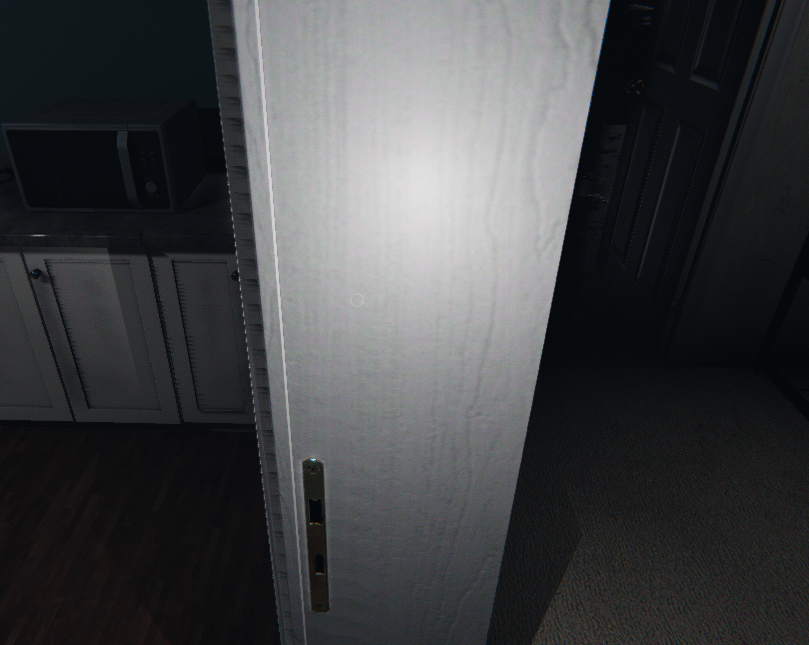 Motion Sensors can be placed inside a doorframe. They are invisible, but can still be picked up again and can be seen on the chart.

This allows you to check if a ghost is walking through a door.

One Motion Sensor by itself does not tell you a whole lot. Its triggered when the ghost passes by. If the ghost keeps standing in front of it, it will retrigger every couple seconds after going briefly dark.


But overall? The ghost is usually gone by the time you reach the area.


However, while one point makes a location, two make a vector.

By placing two sensors near each other, you can determine the direction and likely path of the ghost when walking past them. 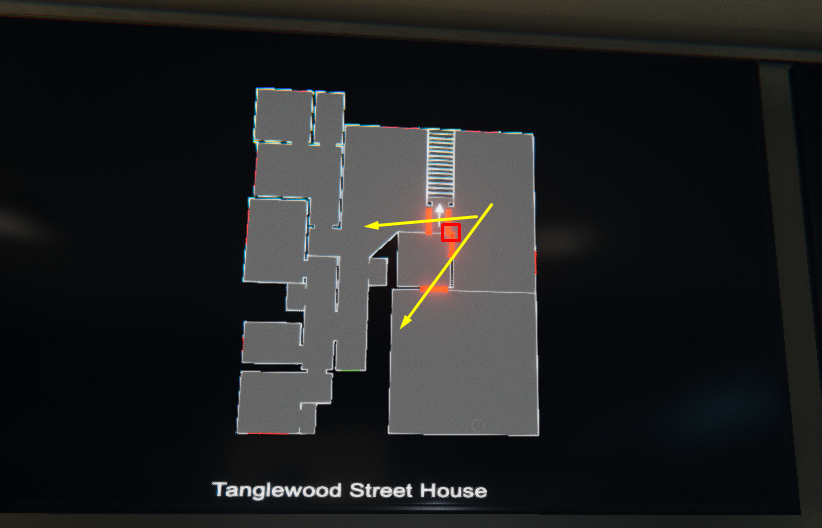 Here, the ghost is in the dining room. By placing two motion sensors in either direction he can exit, I can not only know that the ghost moved past a sensor, but the delay in the triggering tells me the direction it’s heading in.


This is a powerful technique to follow the ghost along and use the spirit box or thermometer, when dealing with a hard-to-pin-down corridor or wandering ghost.

Ghosts often seem to follow reoccuring paths. You can often come across ghosts that almost never go into a certain part of the house and keep using the same or a similar path.


Observing this, aided by motion sensors, can allow you to pinpoint the room of the ghost without any evidence from within the truck! (If you’re patient enough. A good confirmation can take quite a while)


But this isn’t just useful for finding the ghost room.

Taking a moment to study the common movement paths of the ghost can allow you to form an understanding of where the ghost is likely to go, which routes it usually travels, in order for you to track it & get its evidence.

Be careful with your motion sensor placements, especially when using door frames.

Check the red square in the picture above! This is an overlap area where the motion sensor extends into another hallway, meaning that this sensor can be triggered by the ghost walking through the door and, occasionally, by the ghost walking along the hallway to the living room if it’s too close to the wall.

This is all about Phasmophobia – Best Strategy Guide and Game Tactics; I hope you enjoy reading the Guide! If you feel like we should add more information or we forget/mistake, please let us know via commenting below, and thanks! See you soon!