This build allows for taking lots of damage and quickly dishing it back out, making Death Sentence a cakewalk even for players who are trying it for the first time. It also makes it much easier to get your team out of situations that would normally end with you failing the mission.

Without significantly changing the build or its playstyle, this weapon has no non-DLC alternative.


These attachments are needed to bump the Concealment to 27, allowing you to fit this highly destructive hand-cannon into your pocket.

I can’t recommend swapping the ammo. Incendiaries are not guaranteed to stun enemies, and I can’t test Zapper or Viper grenades as I do not have the related DLC.


The IPSC Compensator, Accuracy Boost and Medved Laser are needed for accuracy.

The Extended Magazine is free and much needed mag size.

The Custom Slide is free damage.


The Concealment Boost is self-explanatory.

The Medved Laser is needed for accuracy.

The Ergo Grip is free stability, but can be left out.

The Extended Magazine is needed for extra mag size.

The Buzzer is needed to stun enemies if they get too close to you and catch you off-guard, or if you are trying to dominate them.

You already have a grenade launcher, and your perk deck relies on this, so using something else would be redundant and generally a bad idea.

The Two-piece Suit will be used as it is needed to keep your Concealment rating low, and your Dodge/Crit Chance high.

First Aid Kits will be used so you and your team can stay in the fight or get back in it more easily and so you can revive your teammates without Inspire.

Doctor Bags can be used instead, but only in a pinch or if you are skilled. 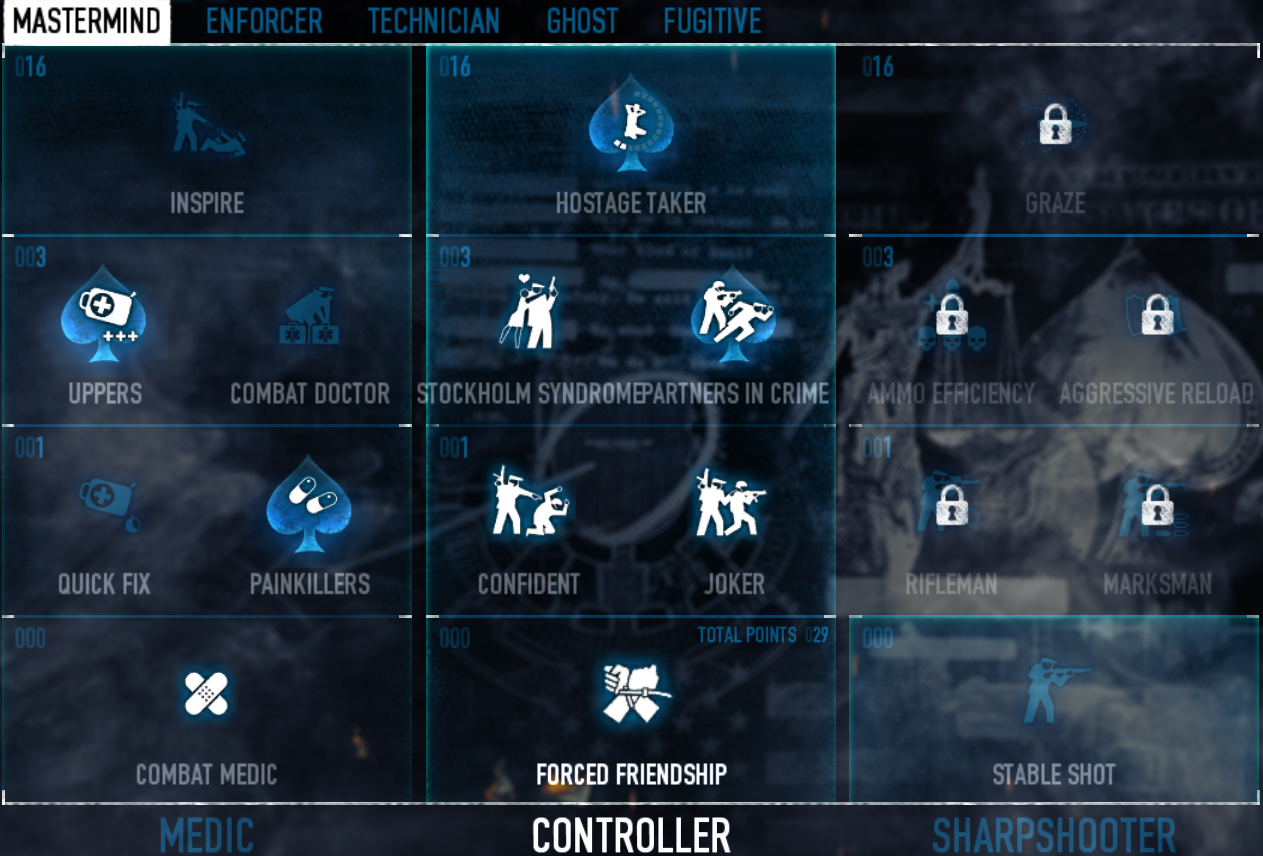 Combat Medic is needed for guaranteeing your survival when reviving players without Inspire, which you don’t have.

Uppers Ace is almost necessary if you need to recover after getting downed, as your perk deck will convert all of your Armor into Health, and you will be left with only a sliver of Health when revived. It is also needed for guaranteeing your survival when reviving players.

Painkillers Ace is almost necessary if you don’t want your teammate to get downed immediately after getting back up.


Joker is for drawing fire from you and your team, and making use of Partners in Crime Ace.

Partners in Crime Ace is needed so that you and your Jokers can take a couple more shots.

Hostage Taker is needed for guaranteeing you get all of your health back when using your Hip Flask, and recovering it without wasting half of a First Aid Kit. 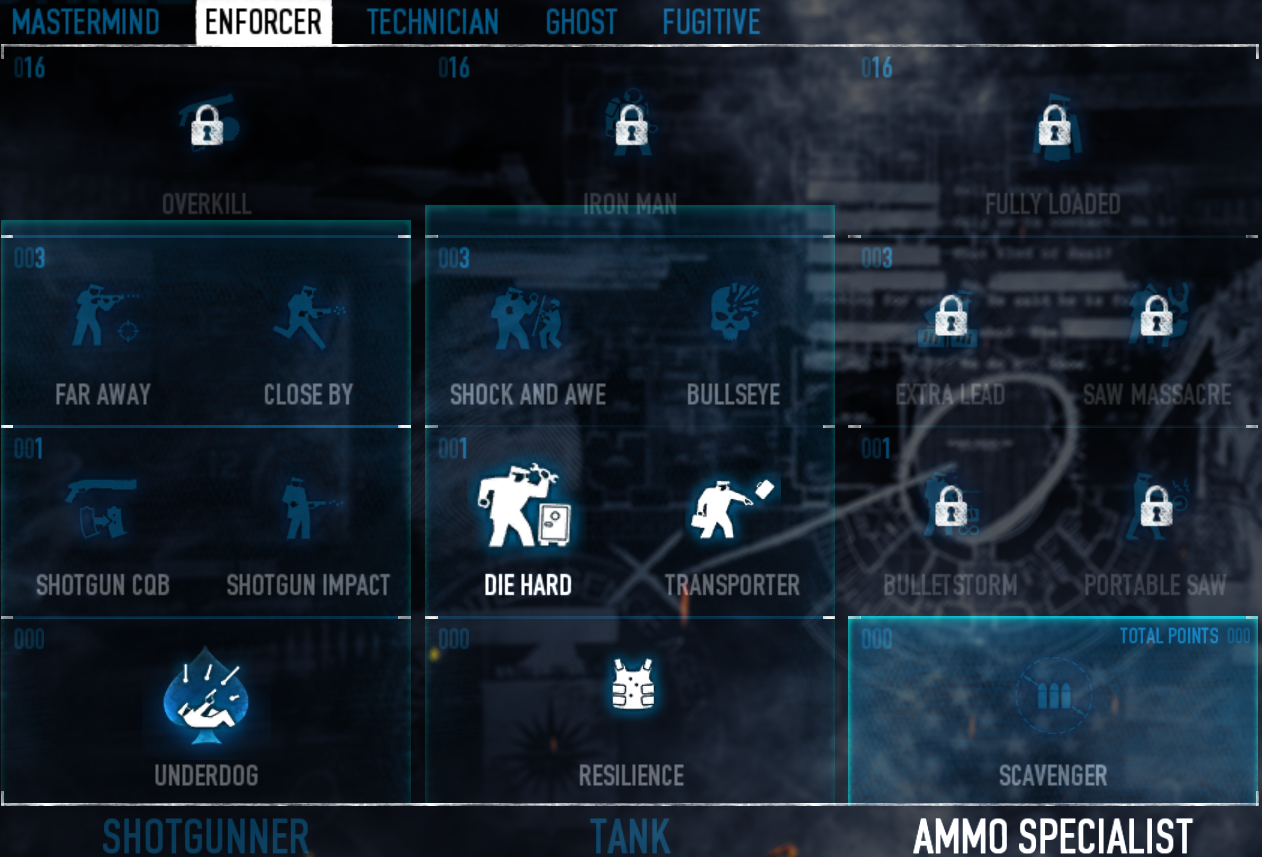 Underdog Ace is needed for the damage and resistance boost.

Resilience is a buffer skill to get the former.

As a Stoic, you have no Armor to recover, so this will never take effect. 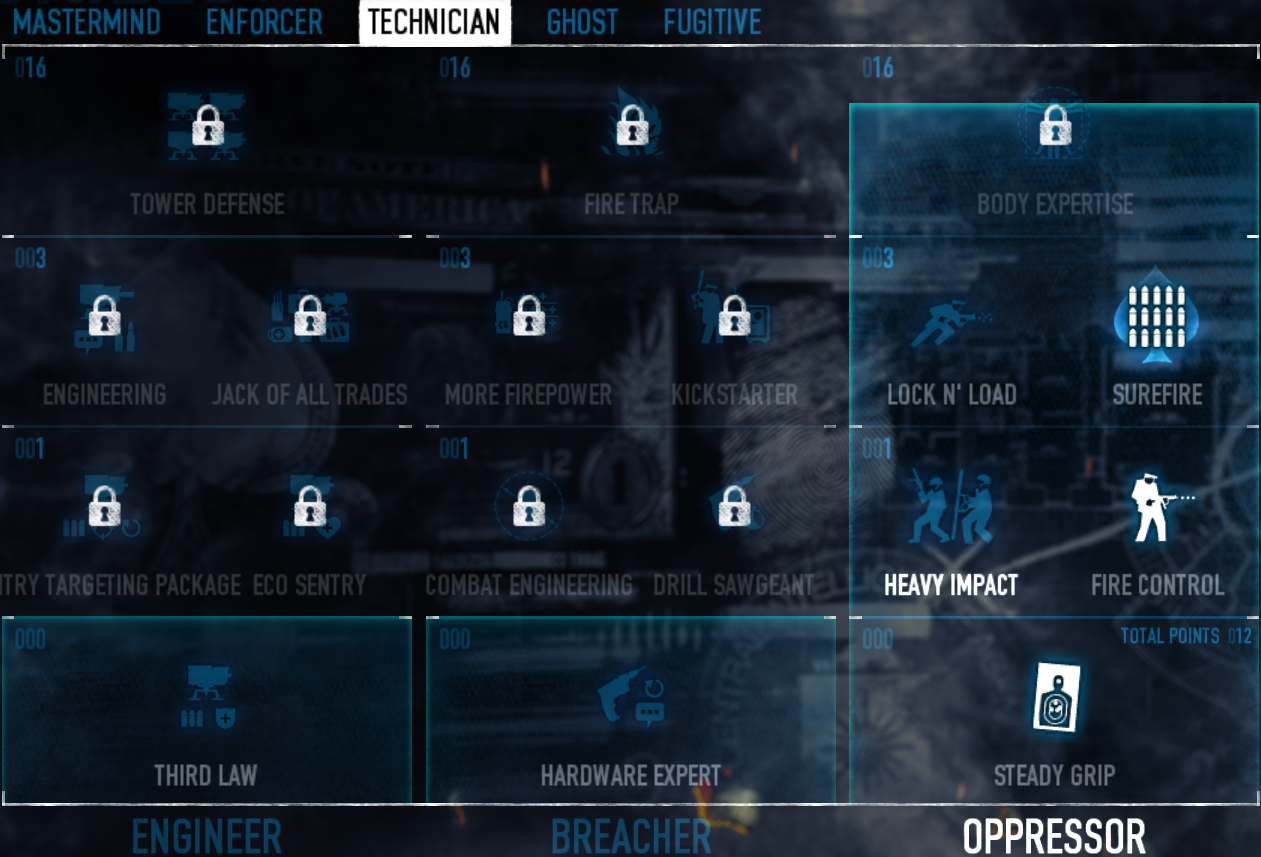 Steady Grip is needed for the accuracy bonus so that you can get headshots more consistently and don’t struggle against Snipers.

Fire Control is a buffer skill to get Surefire Ace.


Fire Control and Surefire Ace can be swapped with other skills, but you better be damn good at aiming. 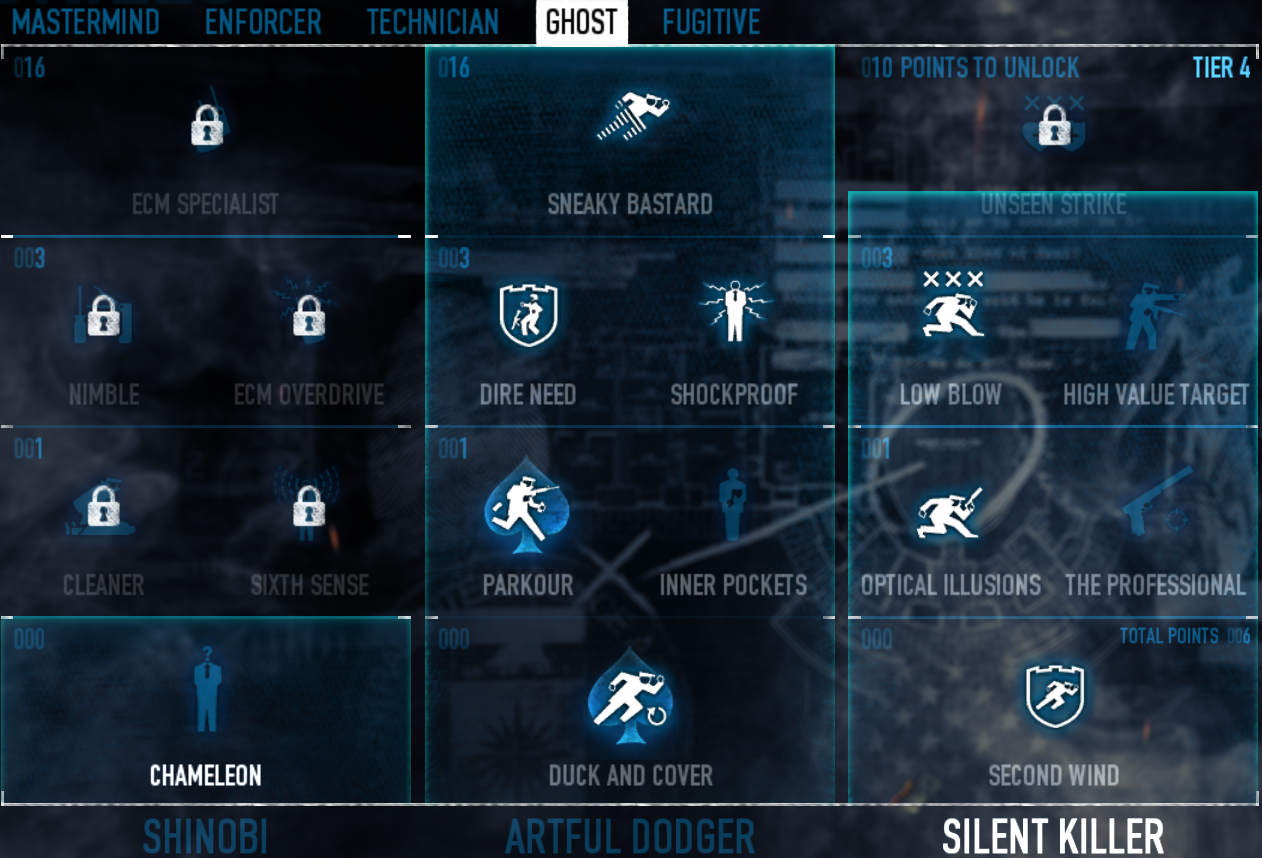 Duck And Cover Ace is needed for Dodge and agility.

Parkour Ace is needed for agility.

Sneaky Bastard is needed for Dodge.

Dire Need, Shockproof are buffer skills to get Sneaky Bastard.

Second Wind is a buffer skill. As a Stoic, you have no Armor to break, so this will never take effect. 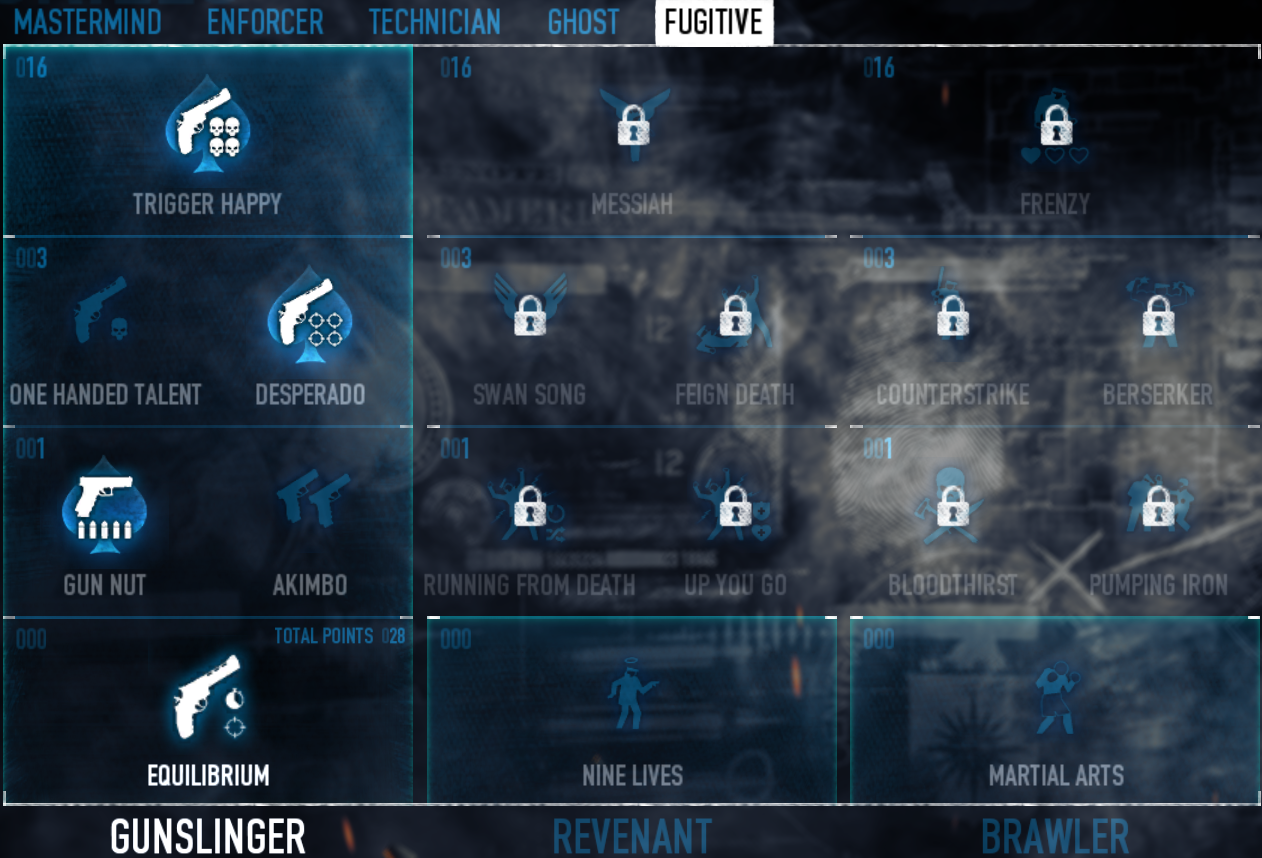 Gun Nut Ace is needed for the magazine and fire rate buff, and to get One Handed Talent Ace or Desperado Ace.

Desperado Ace is for the reload speed boost.

Equilibrium is needed for the weapon swap speed boost and as a buffer skill to get the rest of the skills in the Gunslinger tree.

Trigger Happy Ace is needed for the insane damage boost.


If you do not have the LEO Pistol and its Custom Slide attachment, or want less reliance on crits, consider swapping Desperado Ace with One Handed Talent Ace so you can hit the breakpoint.

As you would normally do on Death Sentence, never try to fight more than two enemies head-on (unless your Hip Flask is ready) and never exit cover unless you absolutely need to or it is safe to do so. It only takes 3 shots to kill you!


This goes for most playstyles in general, but always place a First Aid Kit down and have your Hip Flask ready when trying to revive a teammate so you do not go down with them.

Watch out for Cloakers and Snipers.


Make sure you have a Joker before engaging as the health and speed boost will let you take a few extra shots and move faster.


Aim for the head. With added crit damage and Trigger Happy, you will be able to kill most cops in 2-3 shots, and better cope with your pistol’s mediocre ammo economy.


Use your grenade launcher to deal with larger groups of enemies, take down Shields or

This is all about PAYDAY 2 – Stoic Build for Death Sentence; I hope you enjoy reading the Guide! If you feel like we should add more information or we forget/mistake, please let us know via commenting below, and thanks! See you soon!