Don’t you hate it when your gasses mix? When the polluted oxygen floods into your base? You can do pneumatic doors, but they take lots of metal, slow your dupes down and/or need power to work. And even then some gas will always bleed through unless you go to ridiculous lengths. You can do liquid locks that make your dups jump up and down through them and slow them down, not to mention taking up lots and lots of space. Well, no more. This (mostly) stable liquid lock only takes up as much room as the liquid lock takes: 2 blocks!

The bill of materials is actually pretty small, so I have to pad this section by actually writing stuff or else it would just consist of two things: 2 liquids and some stones.

You will need 2 different liquids. Usually this will be water (obviously) and either salt water or brine, which can both be gained with some luck from the printer. We only need a few grams, so the 2 tons the printer usually gifts us is more than enough for hundreds of water locks. Don’t try to use polluted water, its tendency to emit gasses destroys the lock.

And then some sandstone, granite or whatever else you want to build the bottle emptier and the blocks out of.

Create and place stone blocks and the bottle emptier as shown in this picture: 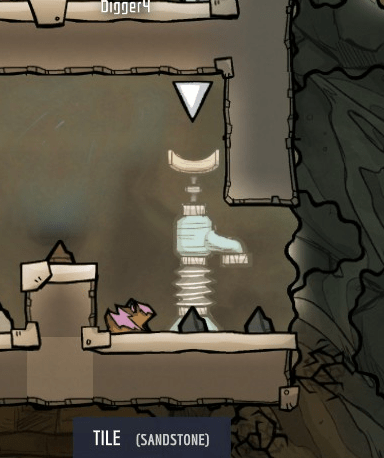 Empty the first liquid. It seems to be working better if you start with the salt water or brine and use the water as the second liquid. Make sure that all 3 ground tiles are wet (sometimes, only the tiles where the water lock should be and the tile the bottle emptier stands on get wet, then just mop everything up and start over). It is very important that the tile behind the bottle emptier is wet, because that’s the only tile we’ll mop up, if it isn’t wet, this will not work. 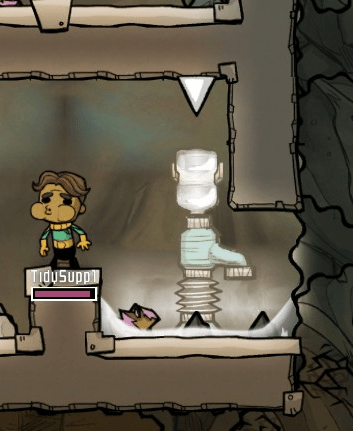 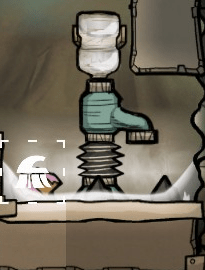 The trick is that when you mop up a tile, the tile and the tile right next to it get cleaned. So cleaning up that tile next to the emptier will lead to only the one tile where we want the water lock to exist keeping its puddle of water. 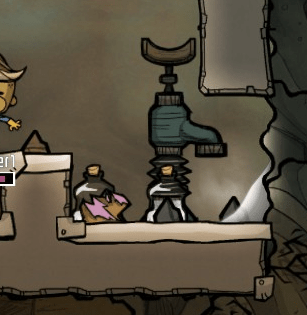 Now do the same with the other liquid (usually water). 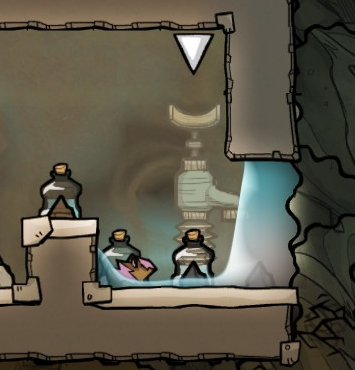 And again, only mop the tile behind the bottle emptier 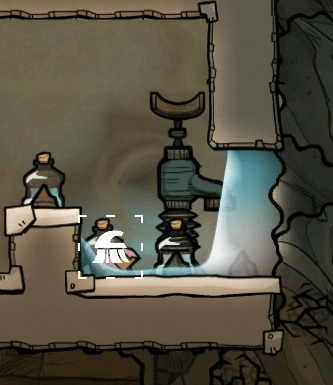 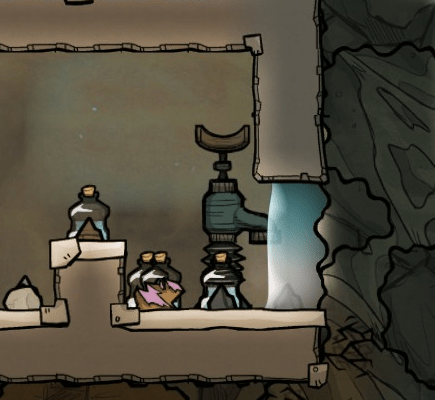 Cleanup and moving on

You’re basically done. Before dismantling the bottle emptier, I highly recommend breaking down the wall behind the lock to see if it’s stable (sometimes the game remembers that balancing two liquids on top of each other shouldn’t happen and they glide off each other). It usually works better if you first remove the upper block, then the lower. 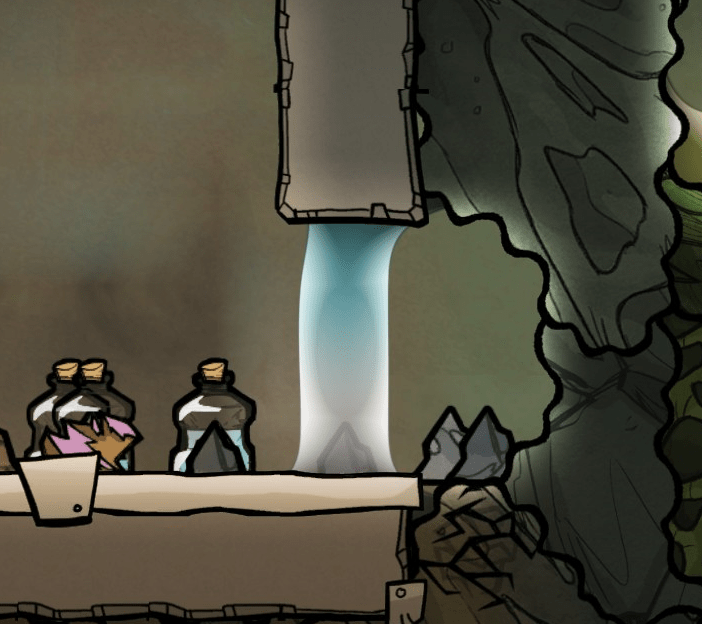 You can now build whatever you want right next to the lock. This is for example pretty much the middle of my base where I lock off the stinky water treatment plant. 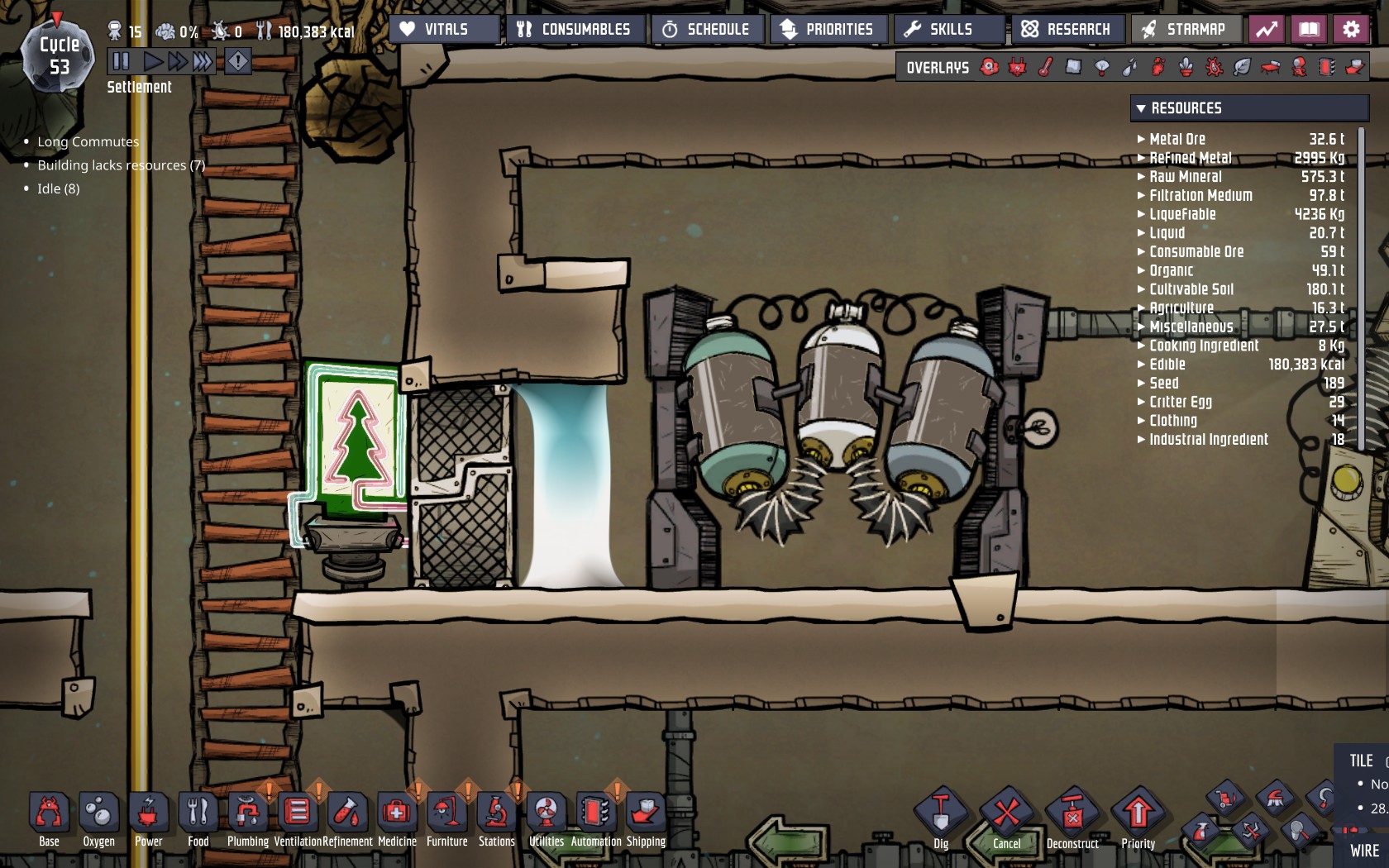 Note that this lock is only semi-stable. For example, it reacts very badly if you try to transport liquifiable objects through it, for some odd reason trying to move ice through it makes it collapse. It also doesn’t work every time, if it doesn’t work for you, keep trying, it sometimes takes a try or three. Make sure you have a wall on the other side of the planned lock, make sure that you only mop up the tile behind the bottle emptier and not the tile under the bottle emptier.

Also, you cannot build in a tile where there is a material that gasses something, in other words, you can’t build where there is bleach stone, oxylite (also not in solid form, i.e. on an oxylite block), slime or any other rubble that emits gas. Move that gas emitting material first, then build the lock.

I hope you enjoy the Guide we share about Oxygen Not Included – Cheap and easy liquid vapor lock; if you think we forget to add or we should add more information, please let us know via commenting below! See you soon!