When To Defeat Big Strong Tree in Omori :

What You Will Need: 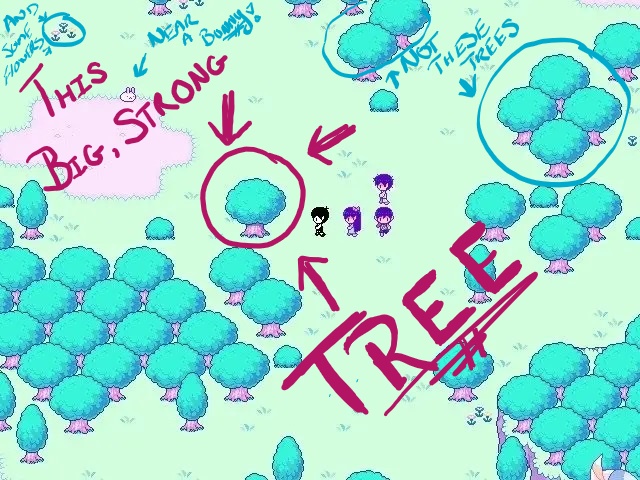 Because of the early stage of the game, many people end up running away and giving up after attempting to make a dent in the defenses of the Big, Strong Tree. There is, however, a way to defeat this monster, with a little patience, planning, and preparation.


The timing that you choose to fight the Big, Strong Tree is crucial, as if you complete the “Search for Basil” task, you will be told to go back and talk to Mari, which will stall your ability to battle the monster tree for a while. Therefore, you should attempt this task from the early outset of the “Search for Basil”.


Here is what you will need:

So just hang in there, follow the steps that will be outlined coming up, and you will absolutely defeat the Big, Strong Tree!!! 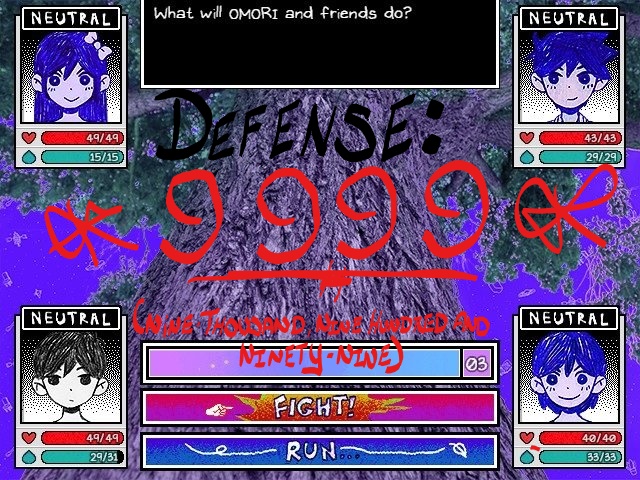 The Big Strong Tree has virtually zero attack prowess, but boasts an incredibly ridiculous defense of 9999. In short, your attacks won’t even scratch the surface of this thing. Additionally, it cannot be inflicted with any Emotion, so if you were thinking about weakening its defense that way, I’m sorry to disappoint you, but it really won’t work.


As I said before, this fight hinges virtually entirely on Omori. If you will recall previously, Omori’s Stab ability deals critical damage and ignores defense when Omori is Sad. So that’s what we are going to do–Make Omori Sad!! In the first round, have Omori inflict Sad Poem on himself. As soon as you get the opportunity, use Kel’s Level 1 follow-up, and have him “Pass to Omori”. Kel will pass his ball to Omori and, with some luck, Omori will now be afflicted with “Depressed”. This will further raise his critical attack and further lower the Big Strong Tree’s defense. Don’t worry if this doesn’t work the first time–just keep trying until you eventually are able to afflict Omori with “Sad/Depressed”.


***Note*** If you get really lucky, if you are able, every now and then continue having Kel try and inflict Sad on Omori again to move him from “Depressed” to “Miserable”, however at this point in the game, depending on your level, that may not be possible, so don’t worry about it too much!!***


After successfully afflicting Omori with Sad/Depressed, at the next possible turn have Omori unleash his Stab ability!! You’ll notice that, whereas before you were unable to make even a DENT in the Big Strong Tree, now you are suddenly doing consistent, real damage. Have Omori do this every round, no matter what, for maximum effect…..however…


…….you will notice that this tactic will severely drain Omori’s Juice, but not to worry–this is where those Apple Juice’s come into play!! It is highly unlikely that you’ll get another Level 3 follow-up again; however, if you do, your best bet is to use Hero’s “Call Omori” follow-up, as this will restore 20% of his Juice. In the meantime, make sure every 2nd-3rd Round or so, when Omori begins to run low on Juice, that you have dedicated one of your party members to continually give him Apple Juice to replenish his Juice before he runs critically low and misses the opportunity to use Stab. Aubrey is probably best suited for this task, as she is probably the only one without a solidly useful follow-up skill at this point. This is just my suggestion, though–honestly, any party member other than Omori can complete this task.


In the meantime, remember those Rubber Bands that we acquired earlier? They aren’t necessary, but if you want to include your other party members in this extremely one-sided fight, have them continually use Rubber Band’s on the Big Strong Tree to decrease defense and deal a bit of damage. You can get a ridiculous amount of them for free from the Ghost Dog I mentioned earlier in one of the caves in the Vast Forest. Just repeatedly enter/exit/reenter until you acquire as many goodies as your heart desires (incidentally, now is a great time to collect cans for free from the Ghost Dog to be used for a separate achievement later in the game, but it’s unrelated to the battle at present).


After continually using Omori’s Stab ability, with Attack Again Follow-Up’s and Rubber Band’s from your other party members as support, while continually remembering to replenish Omori’s Juice, slowly but surely the Big, Strong Tree will weaken, and eventually you will prevail. This battle will net you a cool 500 EXP, so it’s ABSOLUTELY WORTH IT!!


…..so, congrats!! If you followed the advice in this guide, you will have absolutely ZERO issues with defeating the Big Strong Tree relatively early in the game!! Hope you enjoyed this guide!!

Hope you enjoy the Guide about OMORI – Defeat Big Strong Tree in Omori – Walkthrough, if you think we should add extra information or forget something, please let us know via comment below, and we will do our best to fix or update as soon as possible!