Once you reach the ornithologist Jay in the Frozen Peaks zone, you can start to gather feathers for her. As of version 0.17, there are slots for 28 feathers on the games collection page. While all 28 have been located, only 27 of them were actually available in the version this guide is based on (0.17.130).

This guide describes, where you can find all 28 feathers by name, categorized by zone.

Feather of the Pidgeon 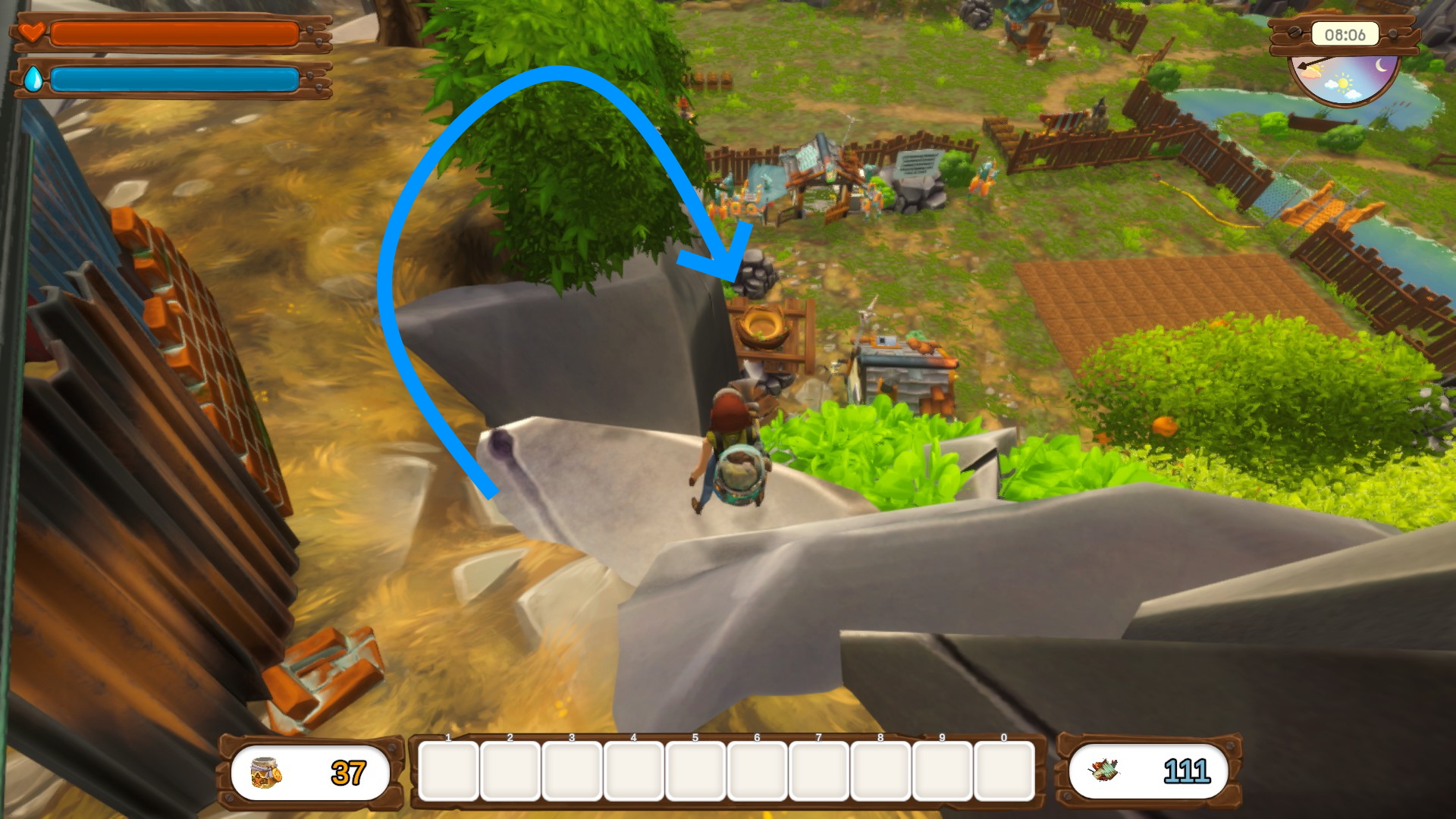 Climb up the ladder in the Llama area of the map. Turn around immediately, you will see the nest on a wooden platform. Go past the shed and drop down onto it.

Feather of the Singing Sparrow 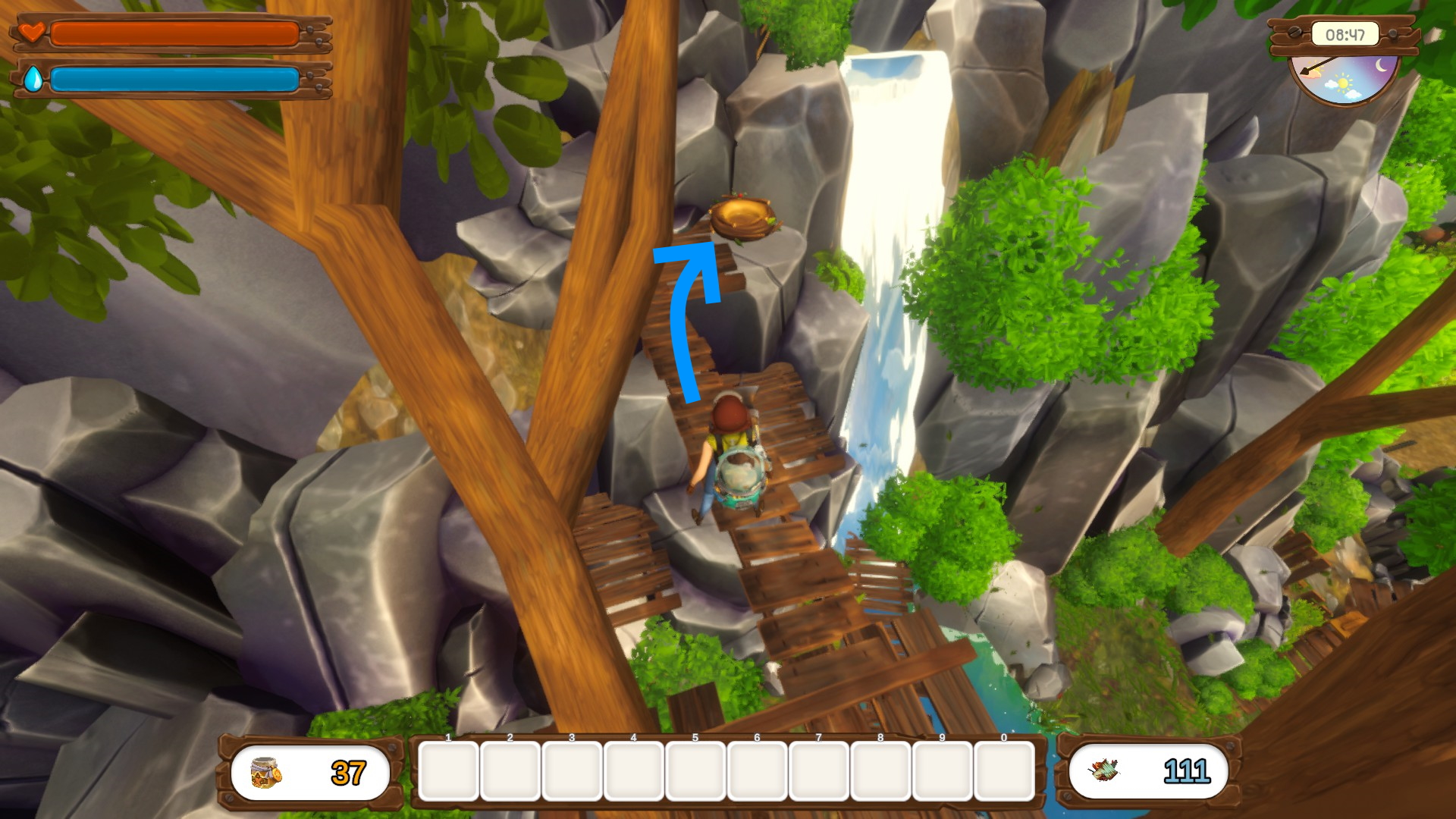 From the Llama area, go through the metal fence, over the bridge and turn right. At the end, you will find a ladder on a tree, climb up. The nest is on a wooden platform connected to yours with a small wooden bridge.

Feather of the Chicken 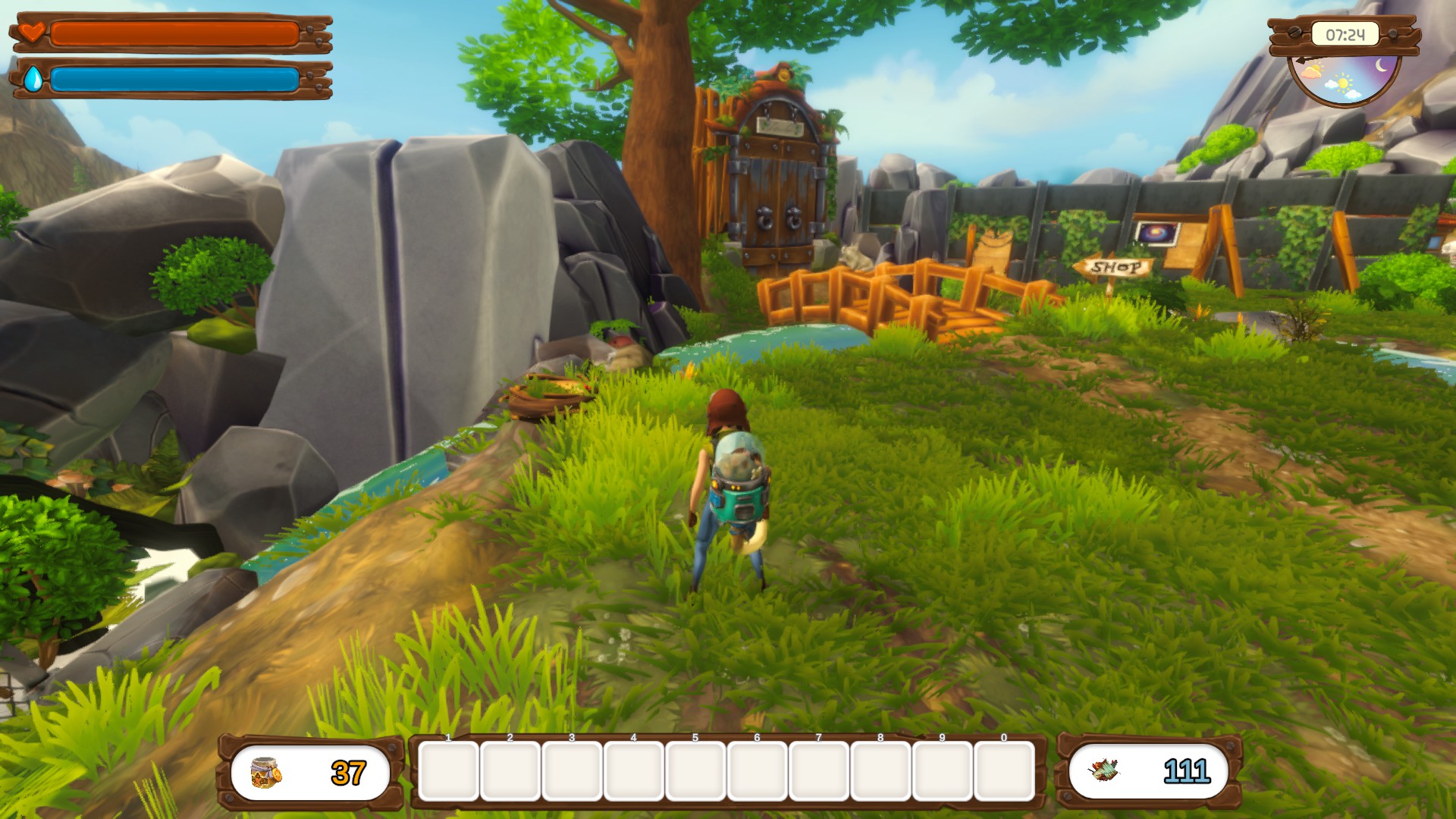 This is the easiest nest. It is just left of the door to the shop

Feather of the Duck 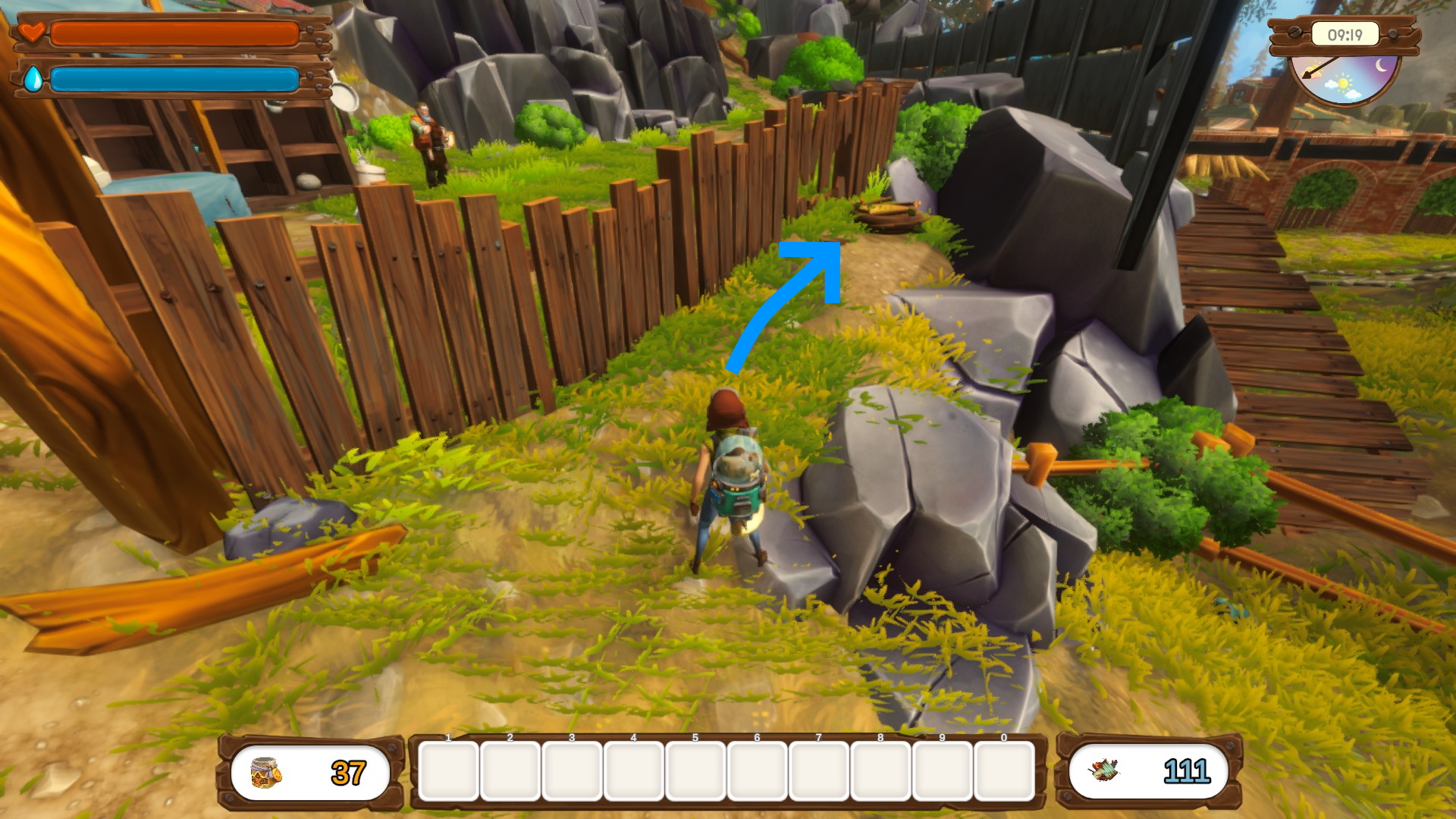 Immediately turn left after entering the village from the shops area. The nest is next to the wooden fence.

Feather of the Blue Tit 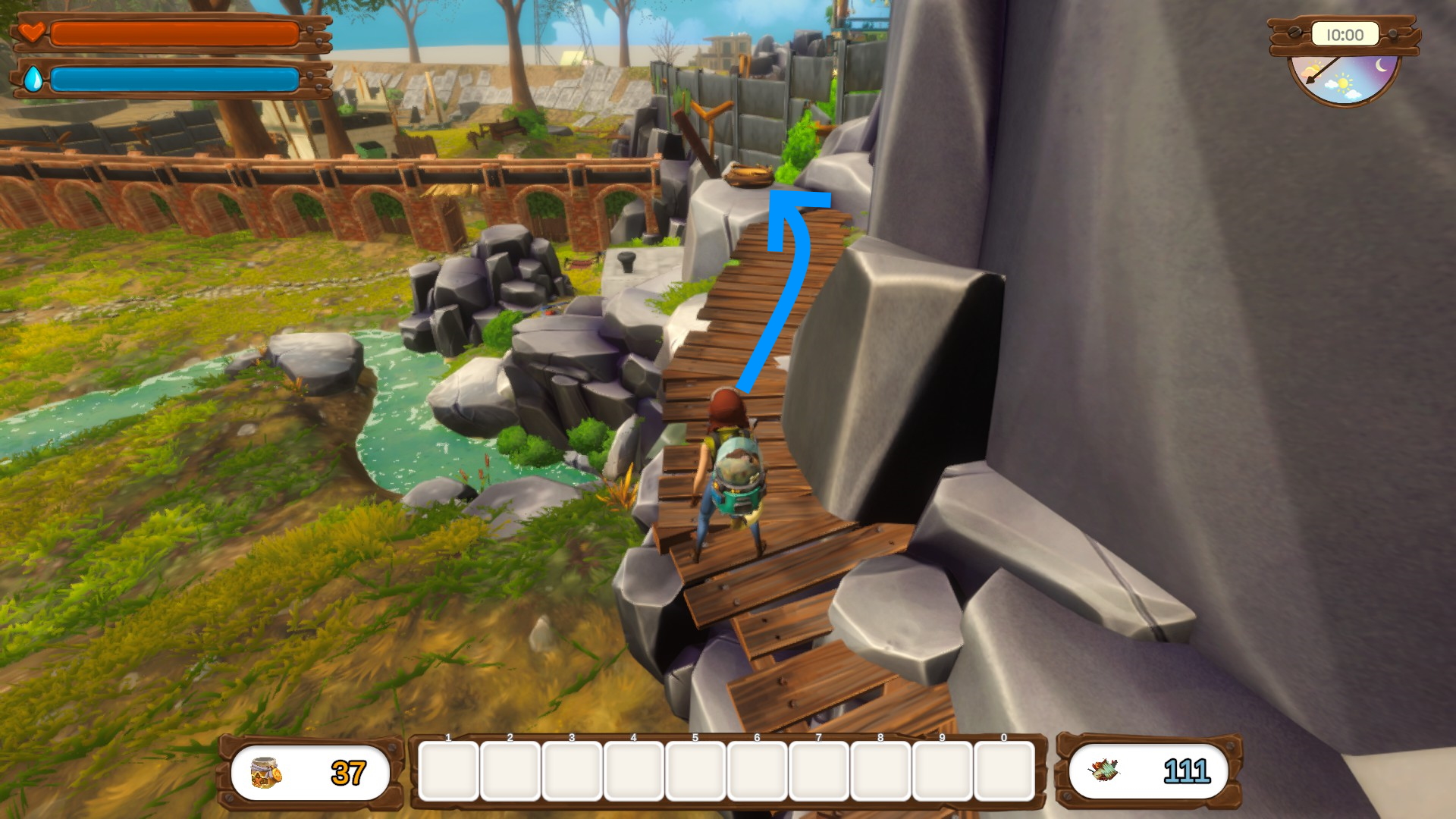 After passing the bridge at Rudy’s house, head straight up the hill and up a wooden ramp left of the fox den. The nest is at the end of it.

Feather of the Wild Goose 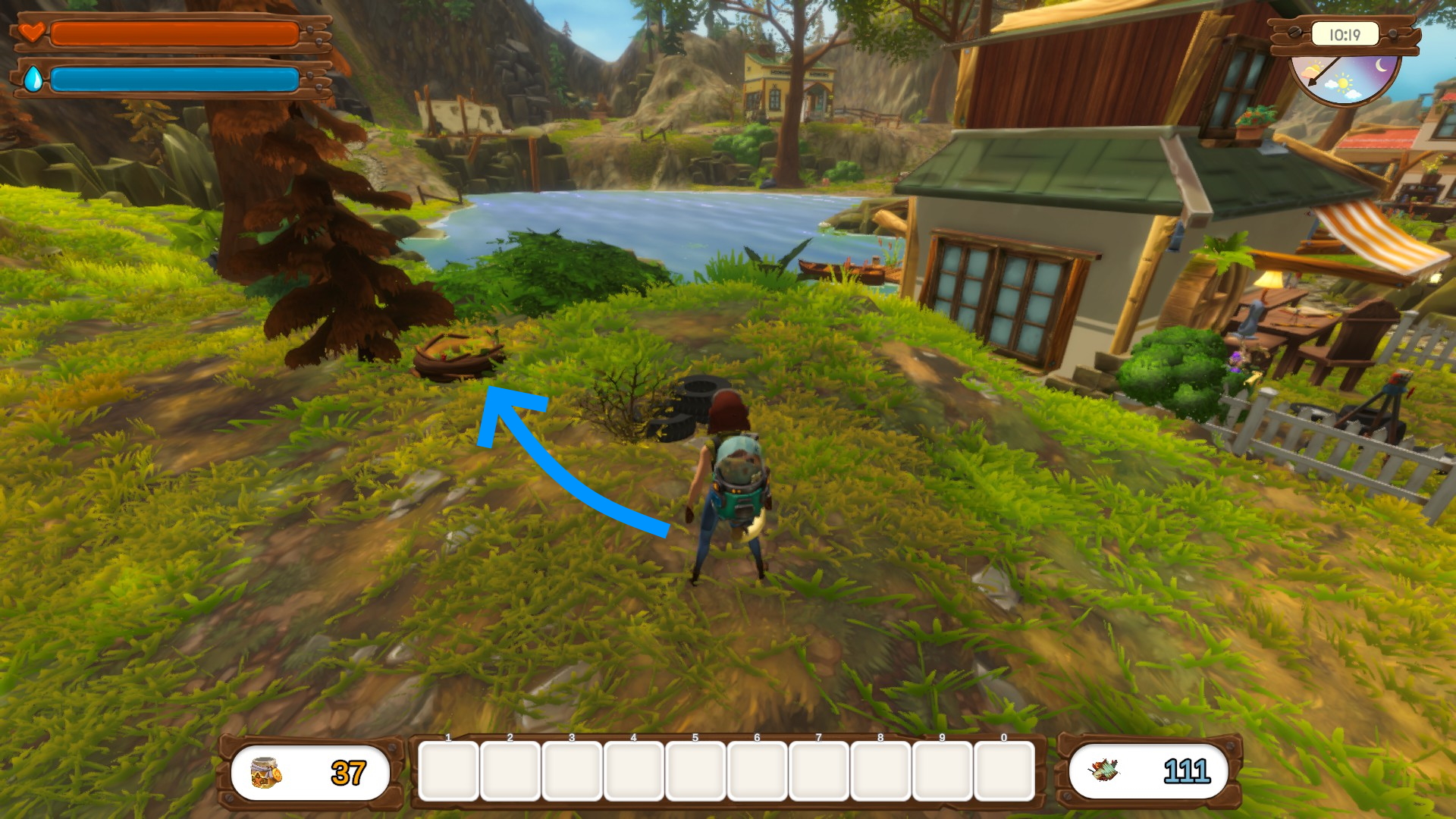 This nest is on a small hill, just behind Frank’s new house (architect).

Feather of the Mute Swan 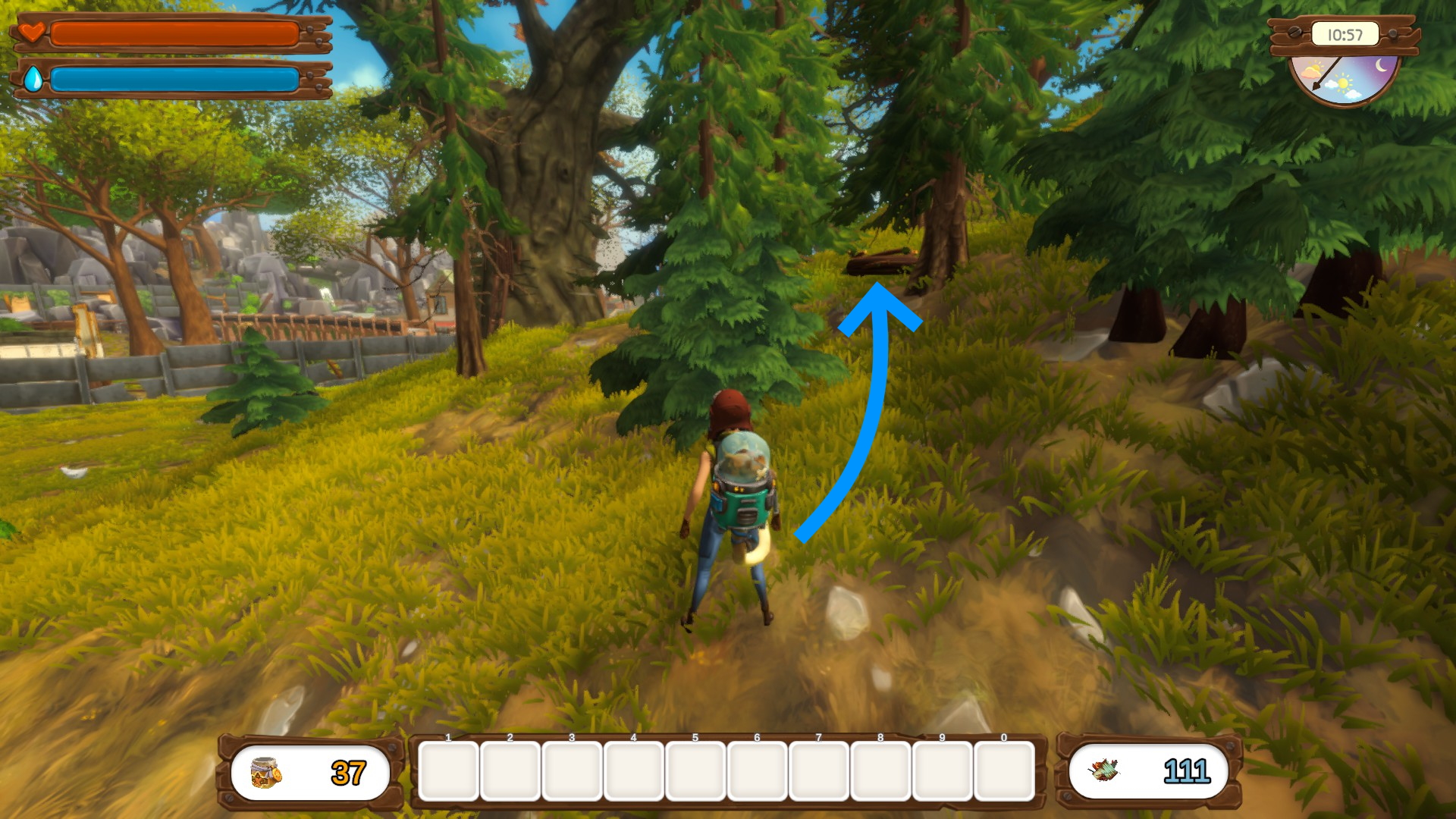 You can find this nest between several trees on a slope right next to the big tree with the platform. This is just across and then left of the draw bridge.

Feather of the Longneck Crane 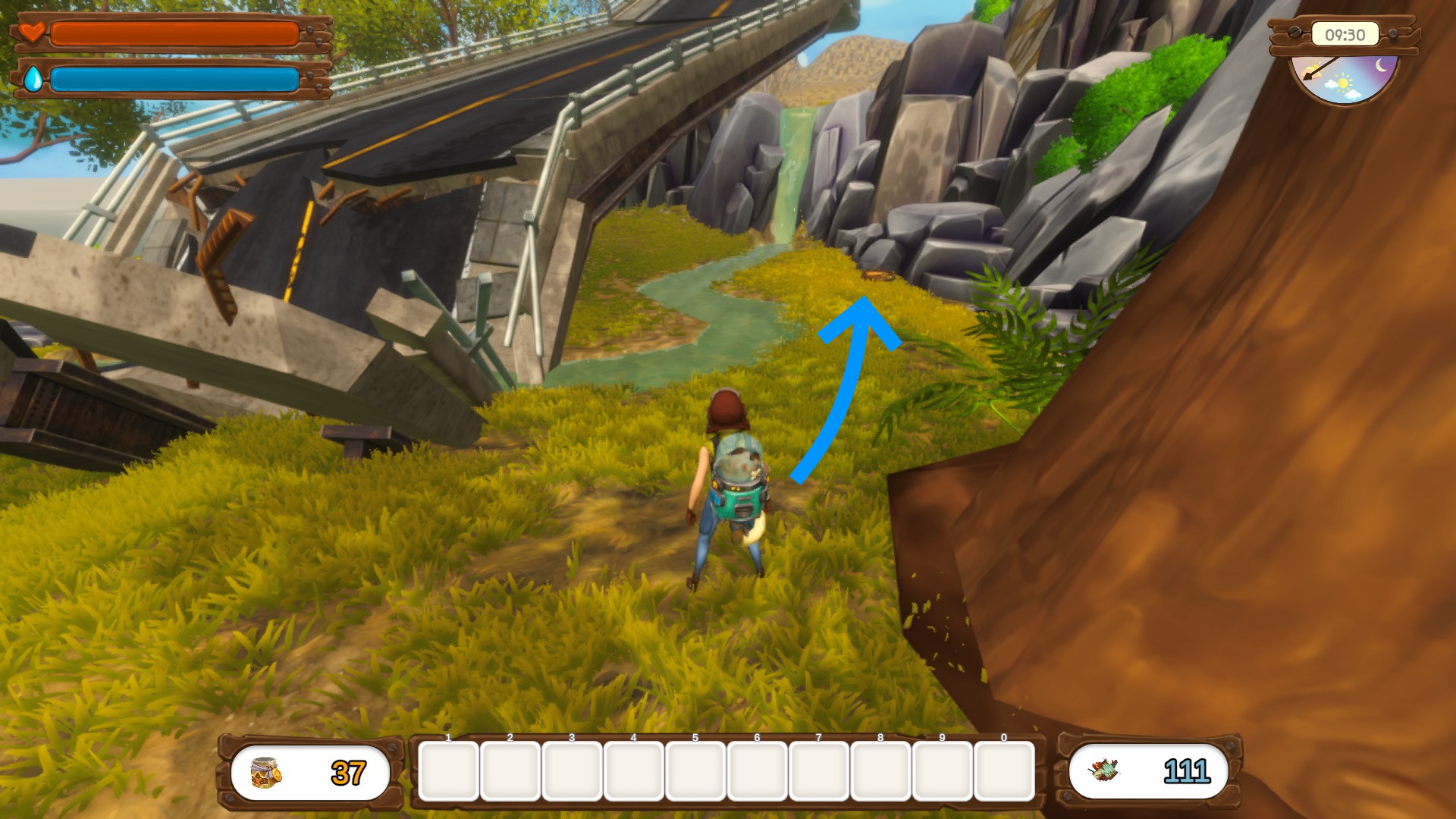 Coming from the shop onto the shore area, immediately turn right and go between the broken highway and the rock face on the right. The nest is in front of a water fall and between a small river and the rock face.

Feather of the Robin 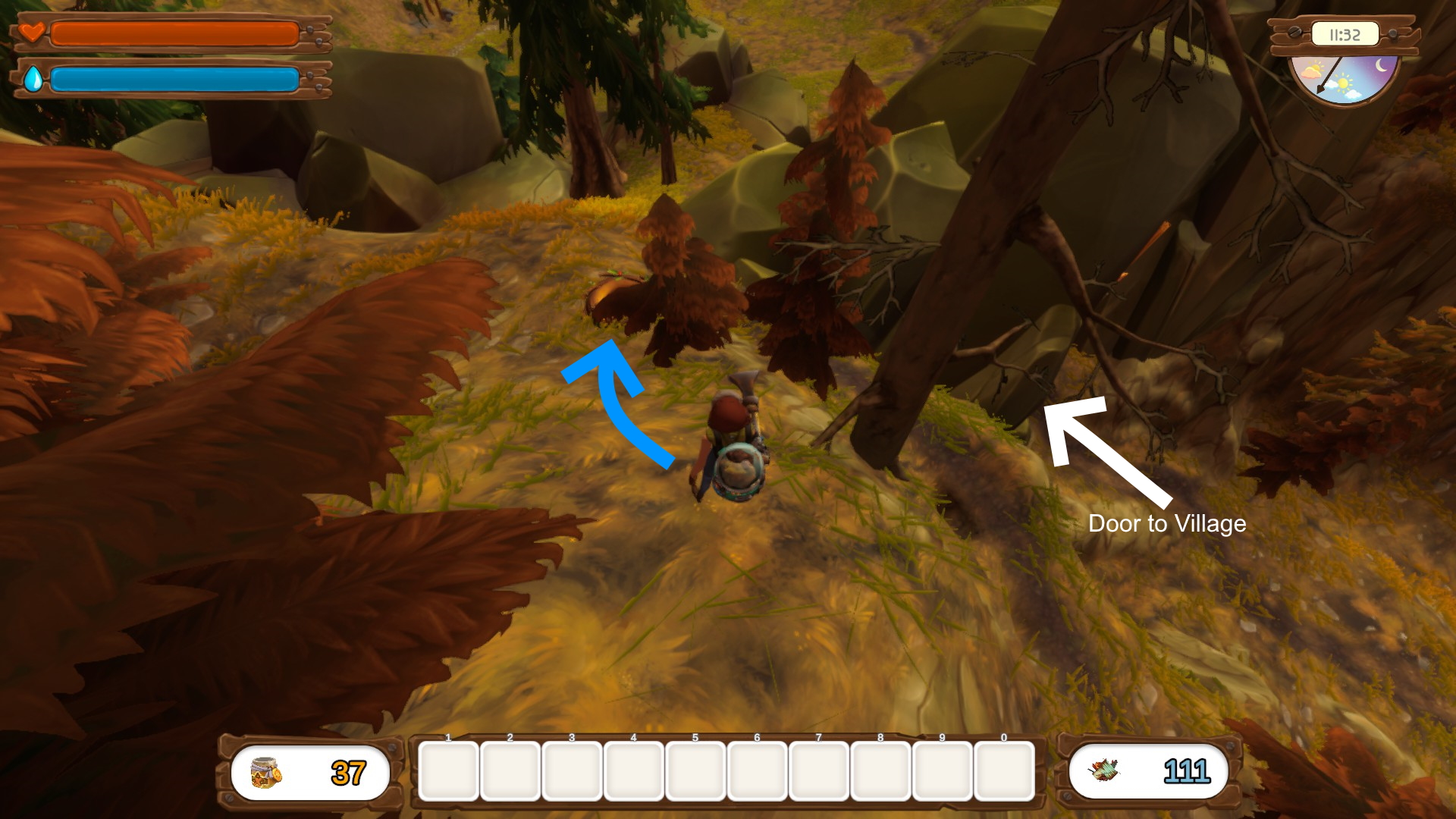 After entering Lonely Hills from the village, follow the path to the right, up the hill. Directly after a ruined concrete pillar turn right and follow the barely visible path to an alcove with the nest above the earlier used entrance.

Feather of the Olive Siskin 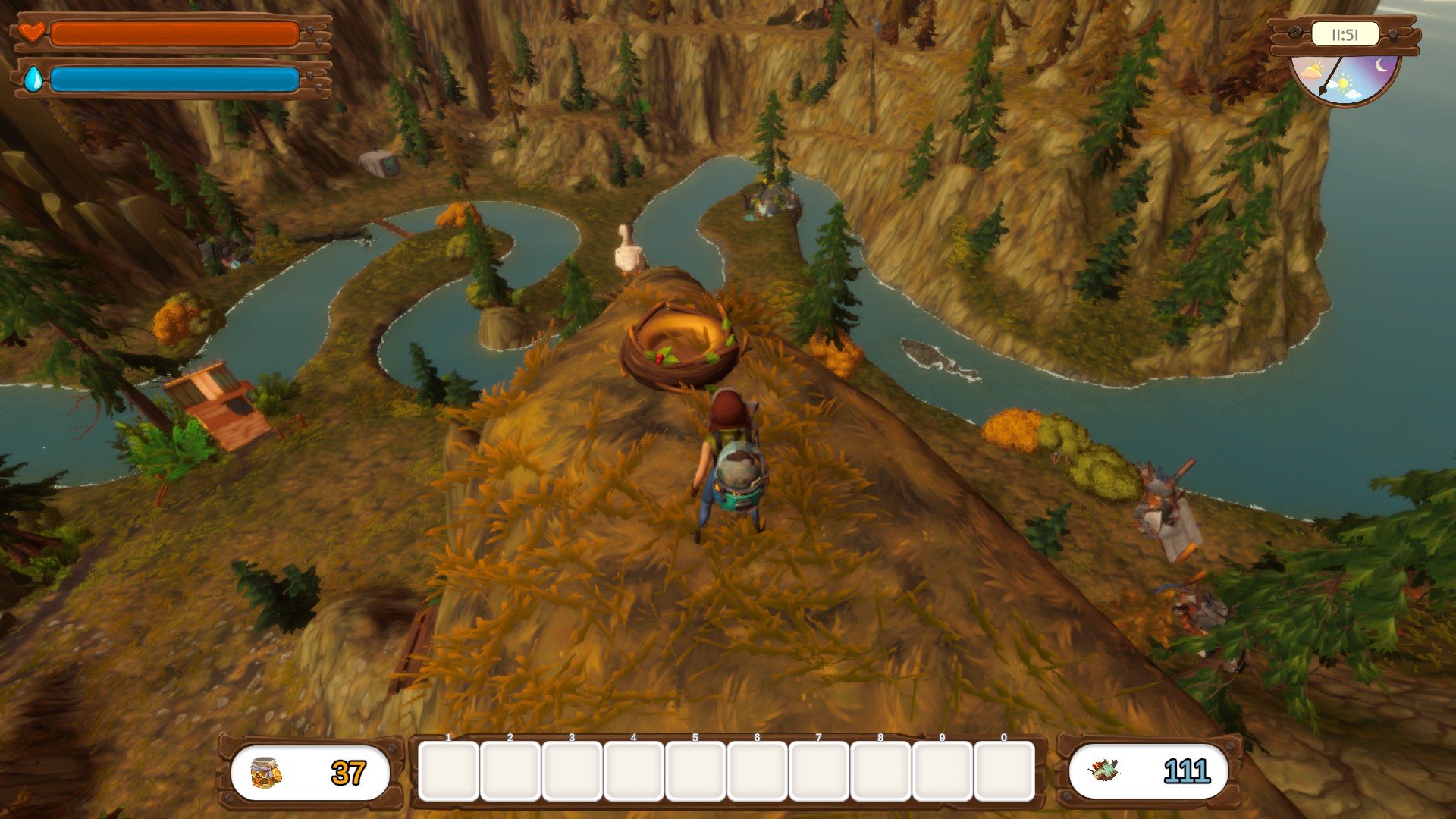 Starting from Rudy’s first position in Lonely Hills, follow the cliff on your left. The nest is on a small peak overlooking the winding river.

Feather of the Mandarin Duck 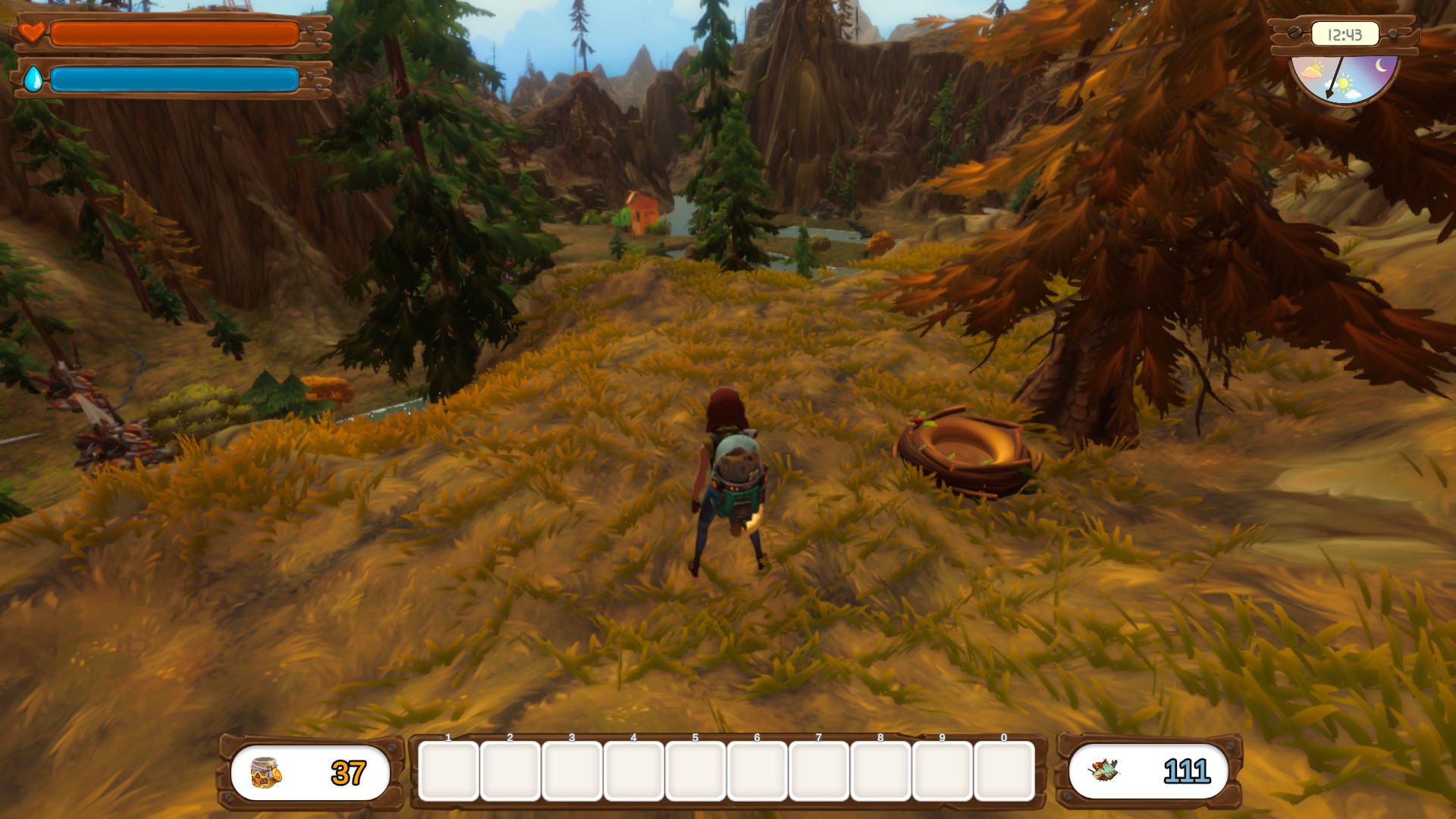 Starting from Rudy’s first position in Lonely Hills, go down the hills left of Rudy towards the winding river. Pass the small wooden shed onto a “peninsula”. At the tip of the peninsula, you will find a buildable bridge (which requires 5 boxes). Alternatively, there is an exit from the underworld on the other side of the bridge. Looking onto the river from that exit, go around a hill on your left and up a small path next to the river. The path has a sharp turn to the left in the middle. Once you are on the higher area, turn right and continue. The nest will be at the end of this area. 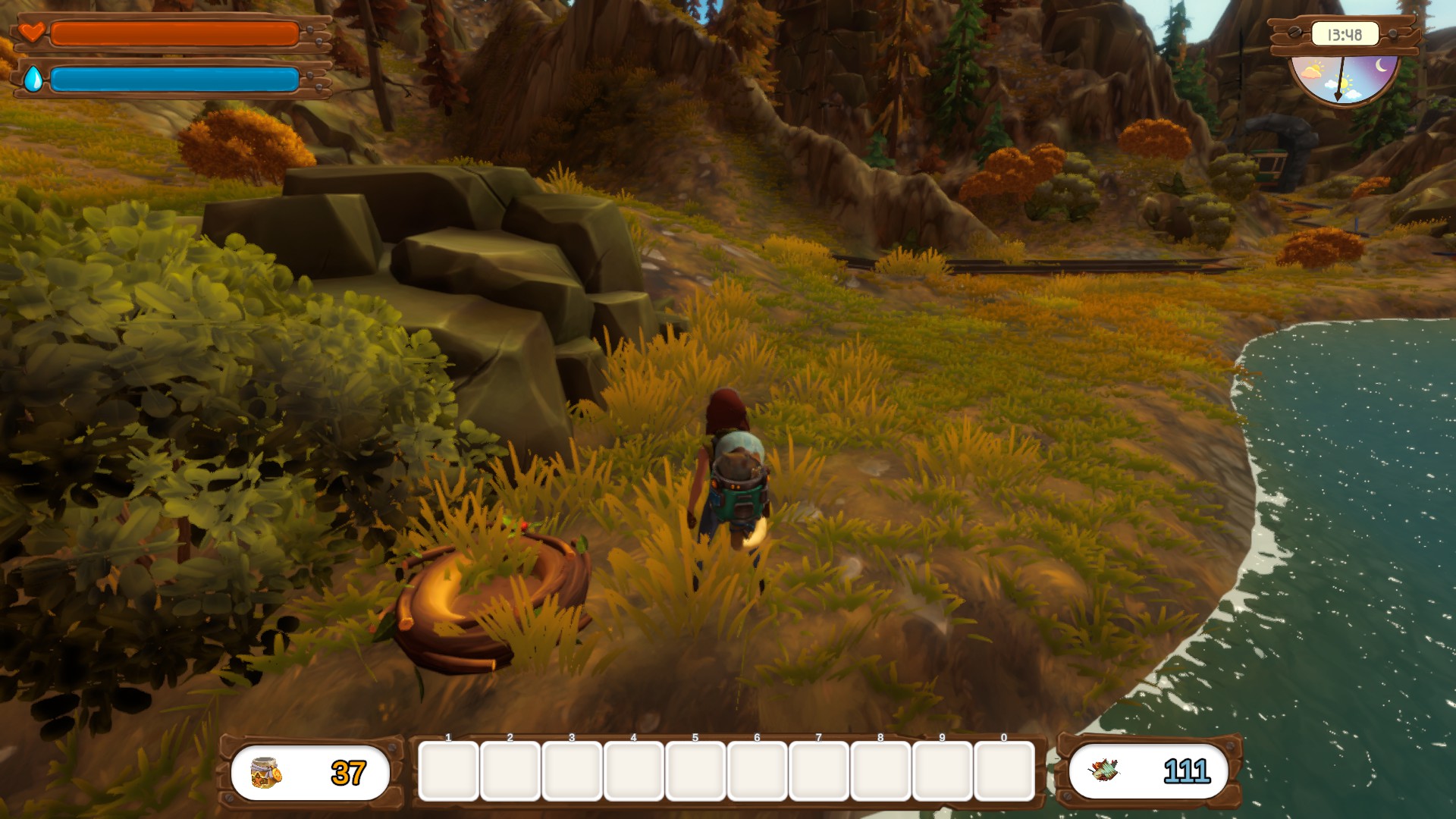 On your way to the hole, coming from the village, as soon as you come across the railroad, turn right towards the river. The nest is behind a boulder, next to a bush.

Feather of the Prickly Pecker 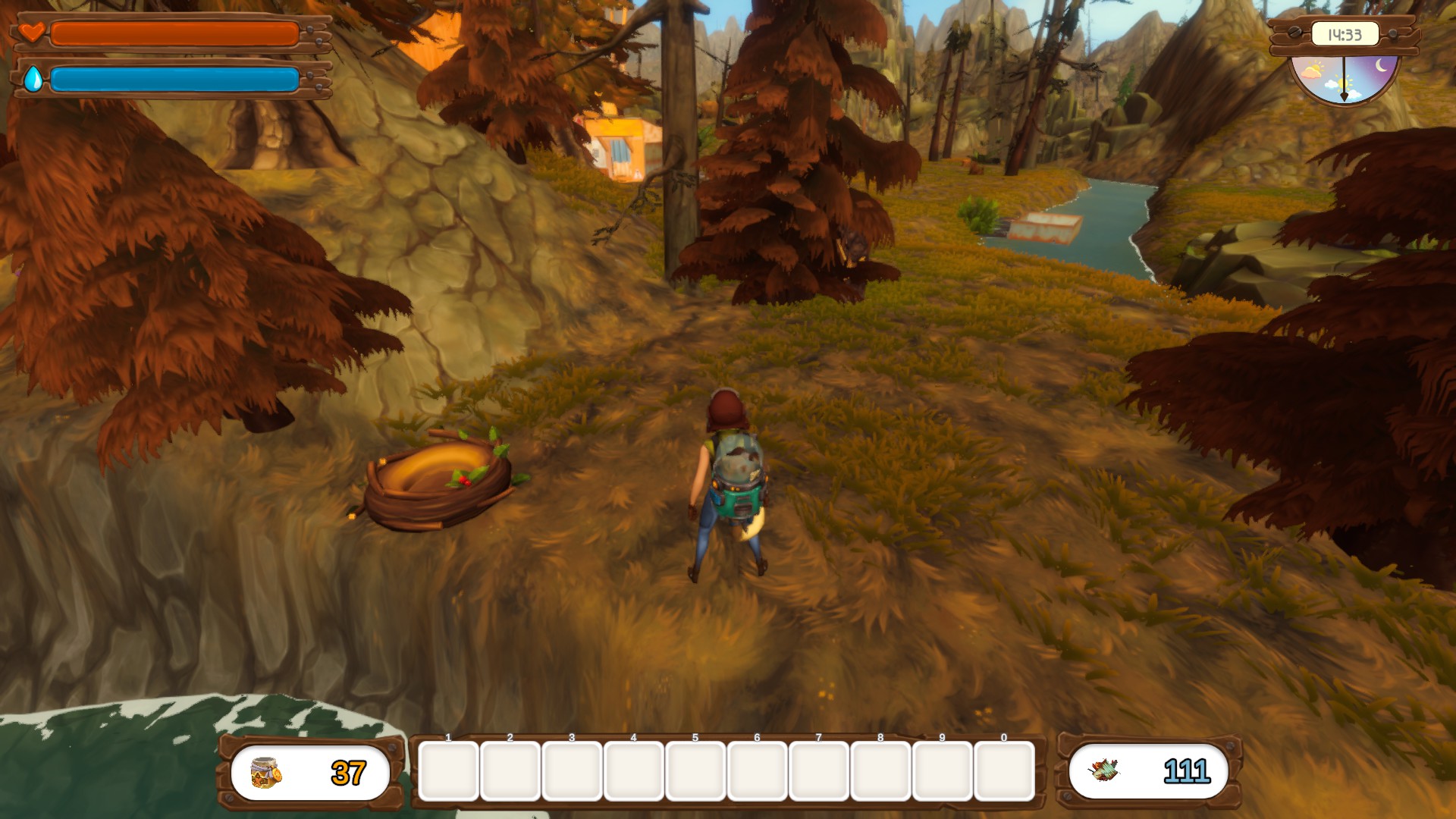 From the Lonely Hills fast travel door, go left past Rudy’s house, left past Frank’s house and left pass a small hill. The nest is directly on the river.

Feather of the Badmouse Kestrel 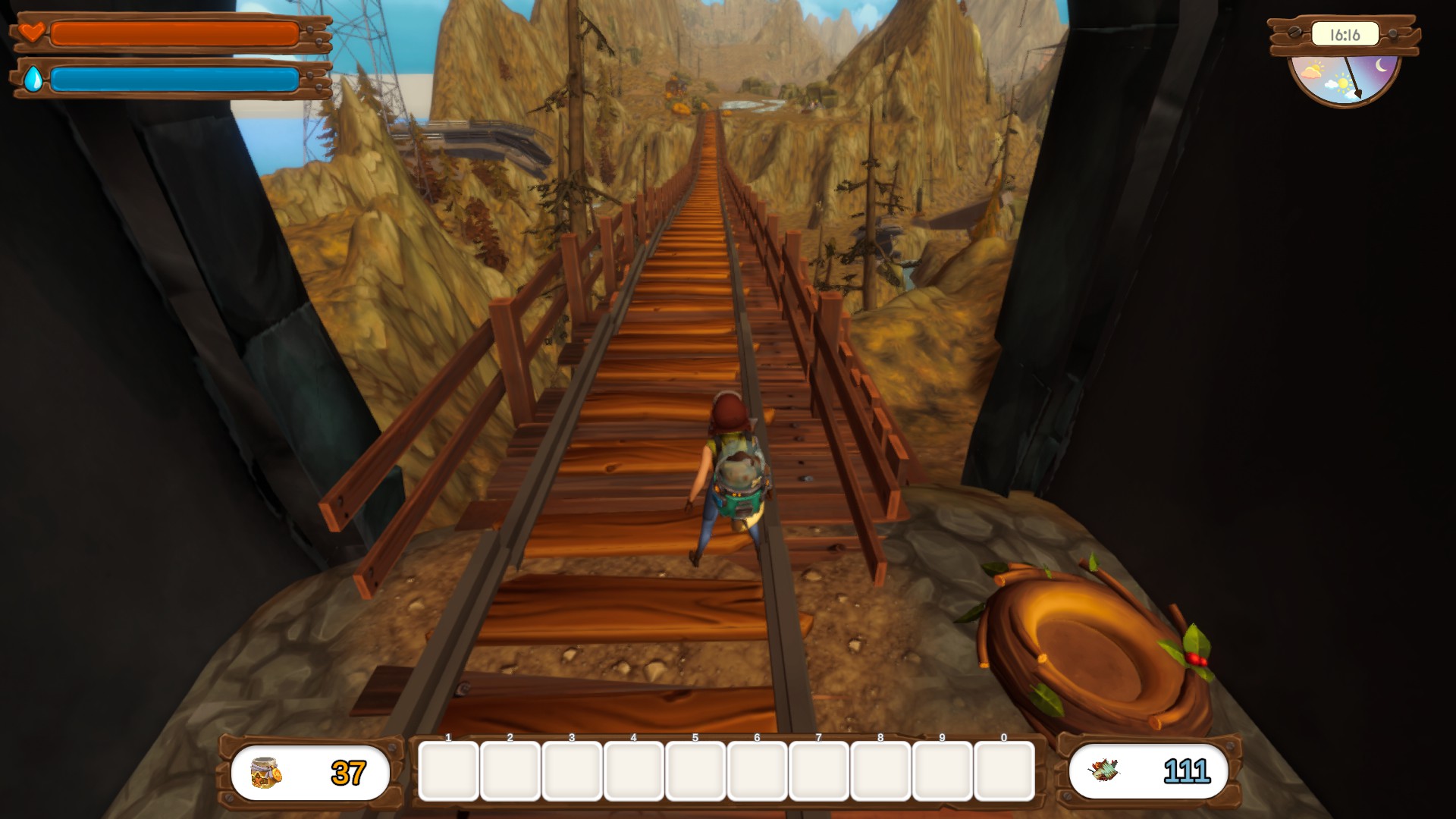 In the area, where you have to find the funghi for Rudy (middle of chapter 3), follow the rail tracks to the left. Cross the railroad bridge to the tunnel entrance, where the nest will be.

Feather of the Elder Falcon 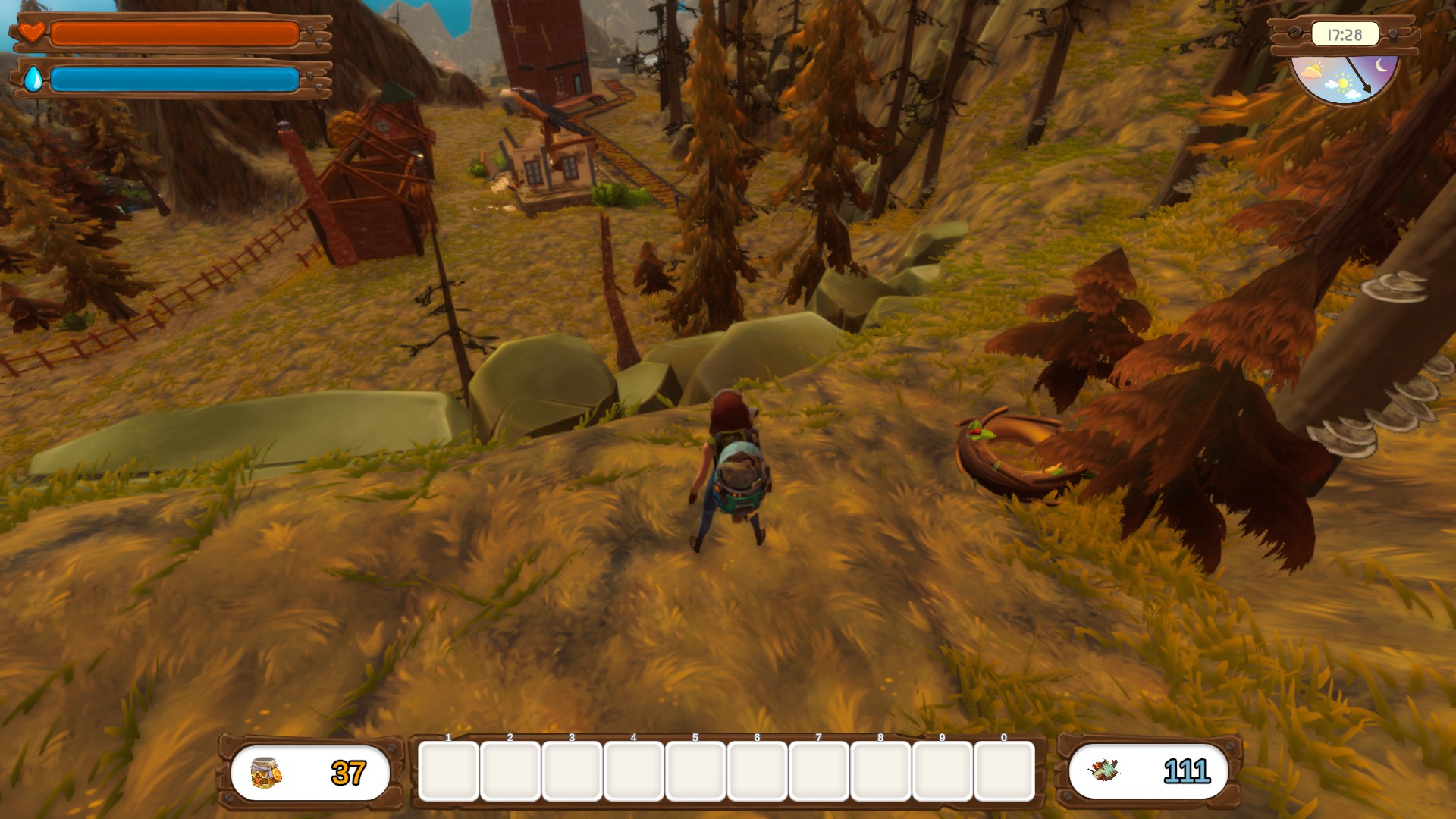 In the area, where you have to find the funghi for Rudy (middle of chapter 3), follow the rail tracks to the right. After they end, follow the cliff on your left, until you find a ladder. Climb up and turn left. You will find the nest after a very short walk.

Feather of the Common Sandpiper 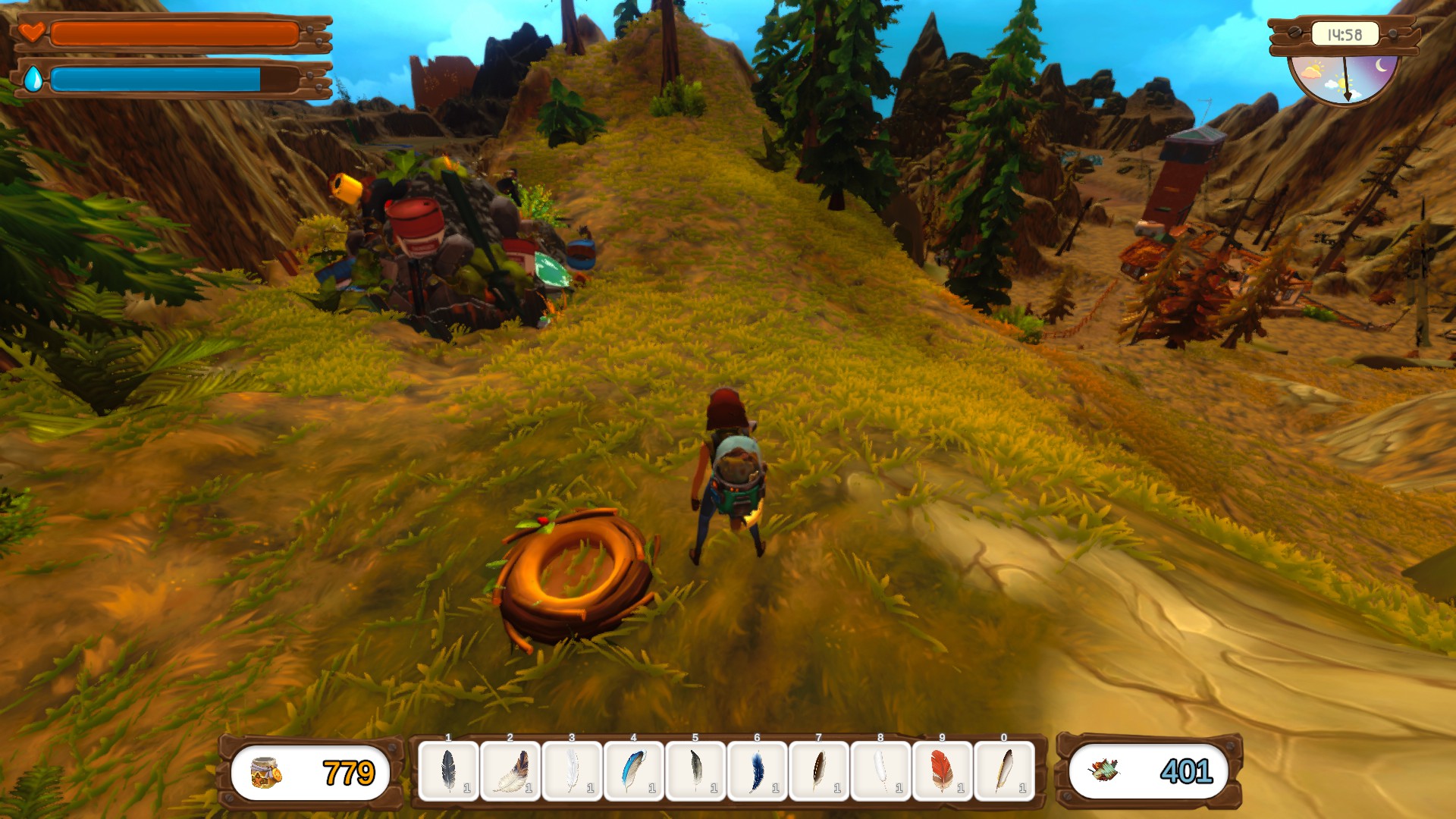 In the area, where you have to find the funghi for Rudy (middle of chapter 3), follow the rail tracks to the right. After they end, follow the cliff on your left, until you find a ladder. Climb up and go up the hill in front of you. The nest is to the left of a toxic fume heap.

Feather of the Little Bustard 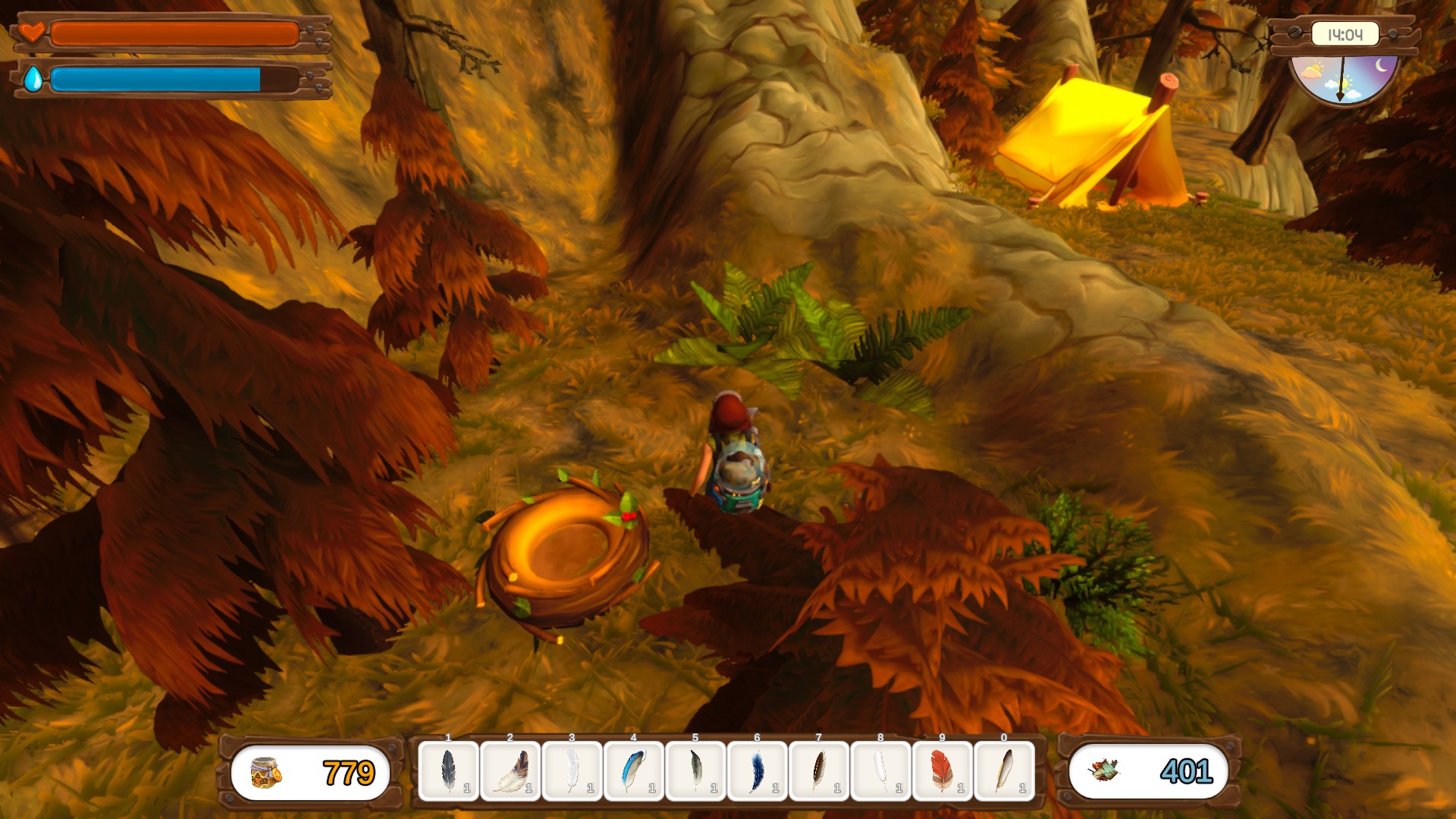 In the area, where you have to find the funghi for Rudy (middle of chapter 3), follow the rail tracks to the right. After they end, follow the cliff on your left, until you find a yellow tent. The nest is just to the left of it.

Feather of the Mockingbird 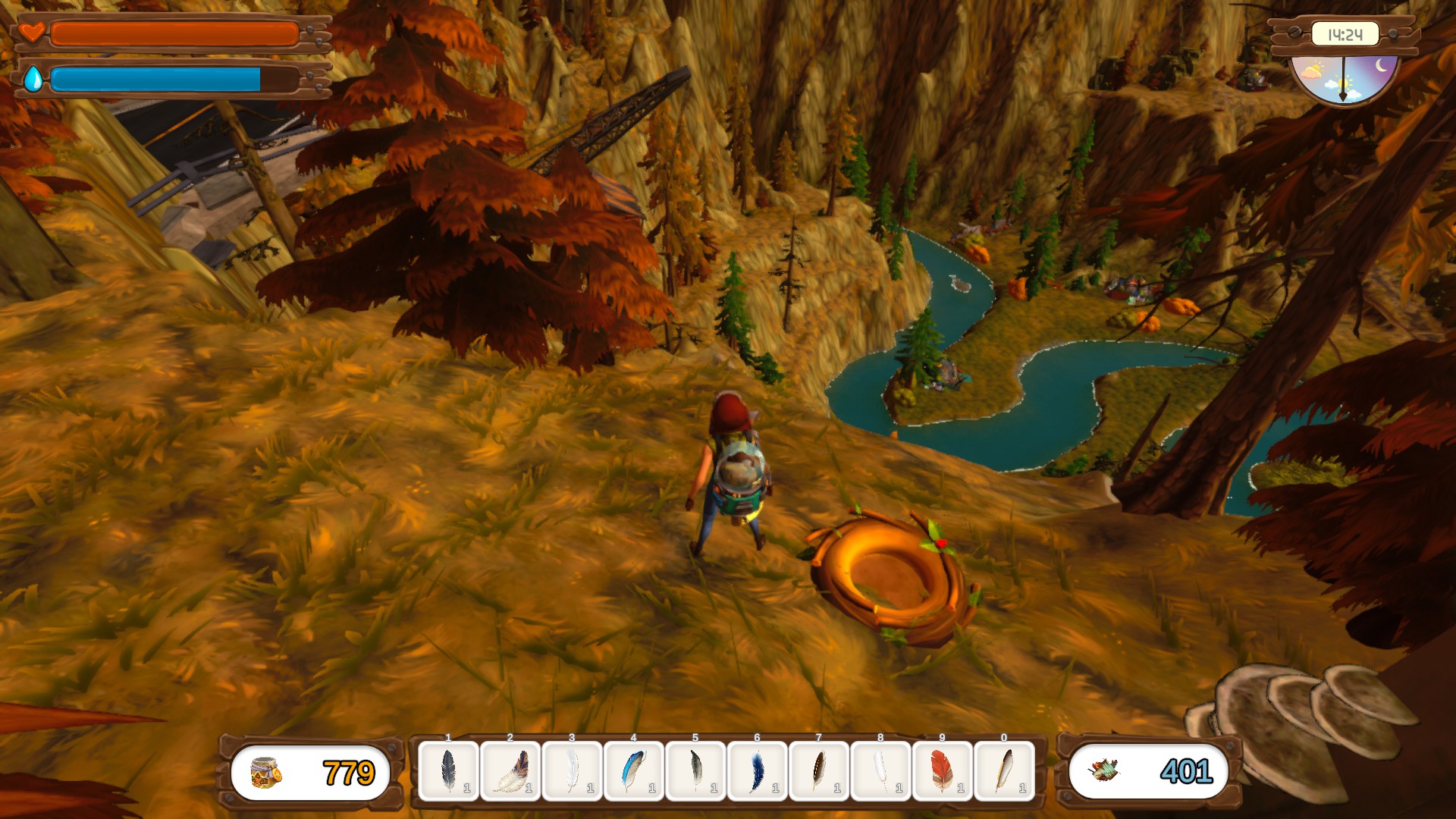 This feather was originally in the third section of Frozen Peaks, but in version 0.17 it was moved here.

In the area, where you have to find the funghi for Rudy (middle of chapter 3), follow the rail tracks to the right. After they end, continue on heading to your right. The nest will be at the very end of the area, overlooking the winding river.

Feather of the Blue Jay 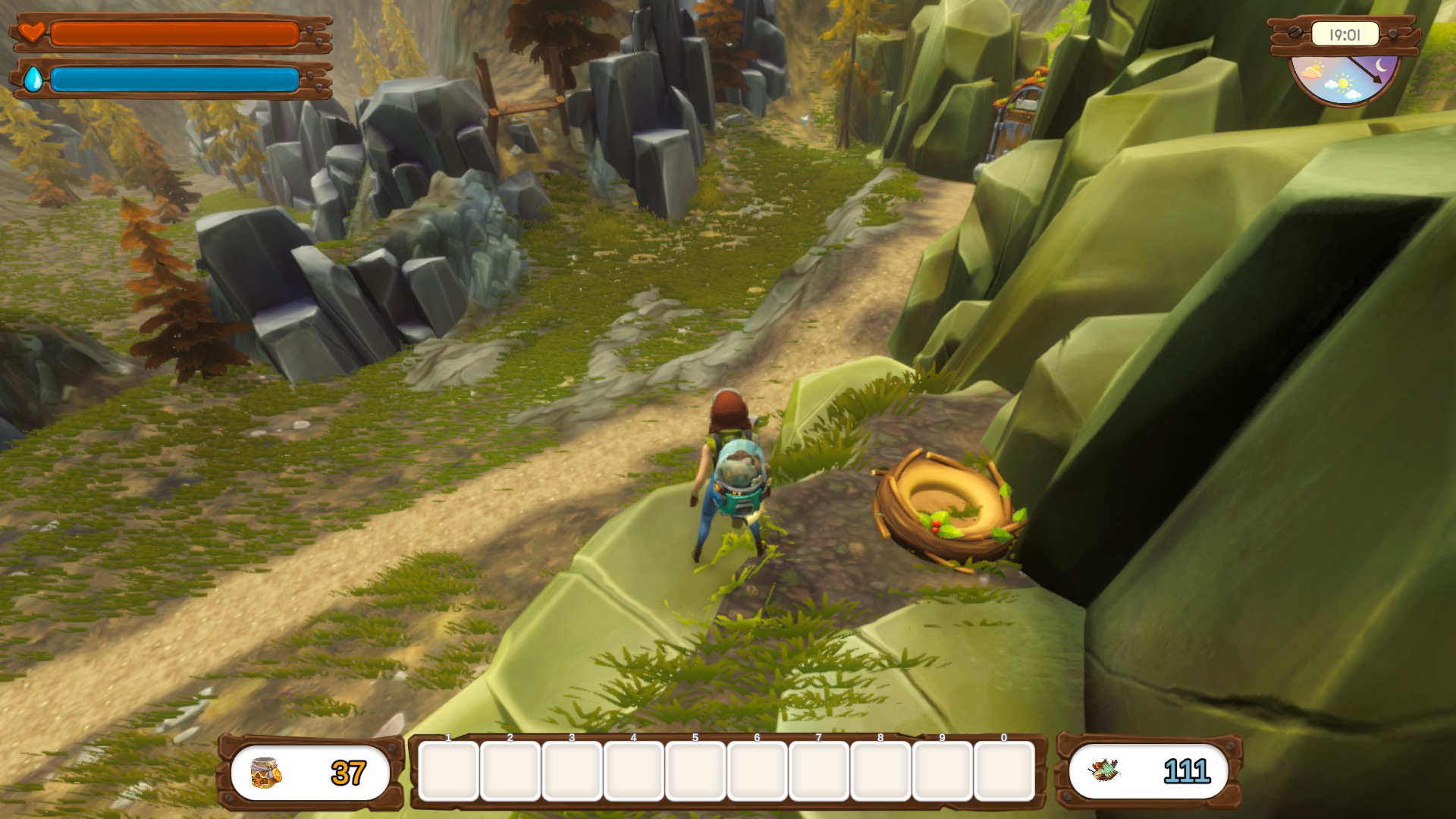 Upon entering the first section (lumberyard) of Frozen Peaks, keep to your left, until you reach a ramp going left up the cliff. The nest is at the end of this ramp.

Feather of the Goldfinch 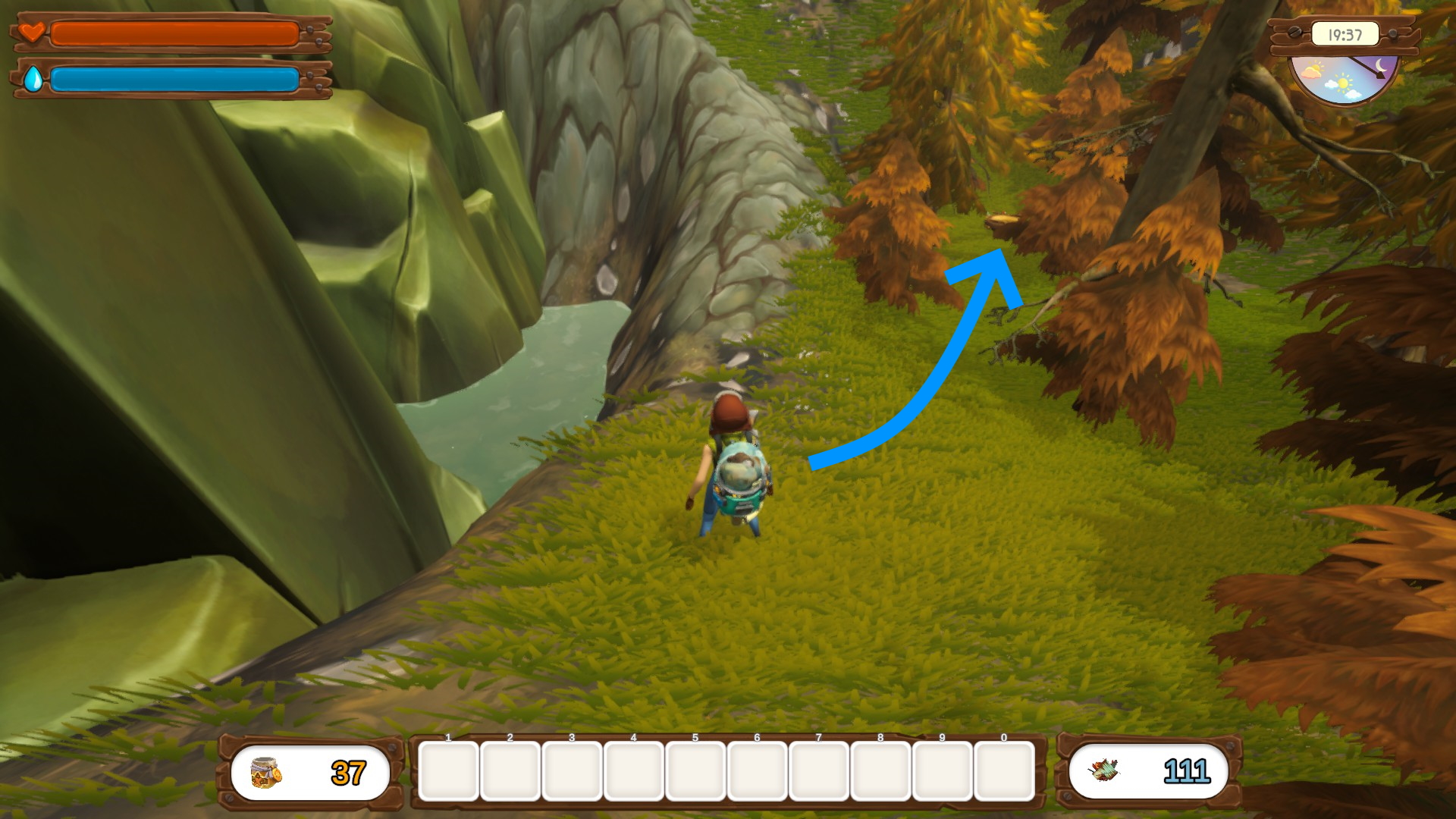 Coming from the village, when you enter the lumberyard clearing and see Jay, turn toward the water and see the water activated button. Activate it. This opens a fence door near the water (follow the cable from the button). Inside this area, you can find the nest (might be hidden under rubble).

Feather of the Thieving Magpie 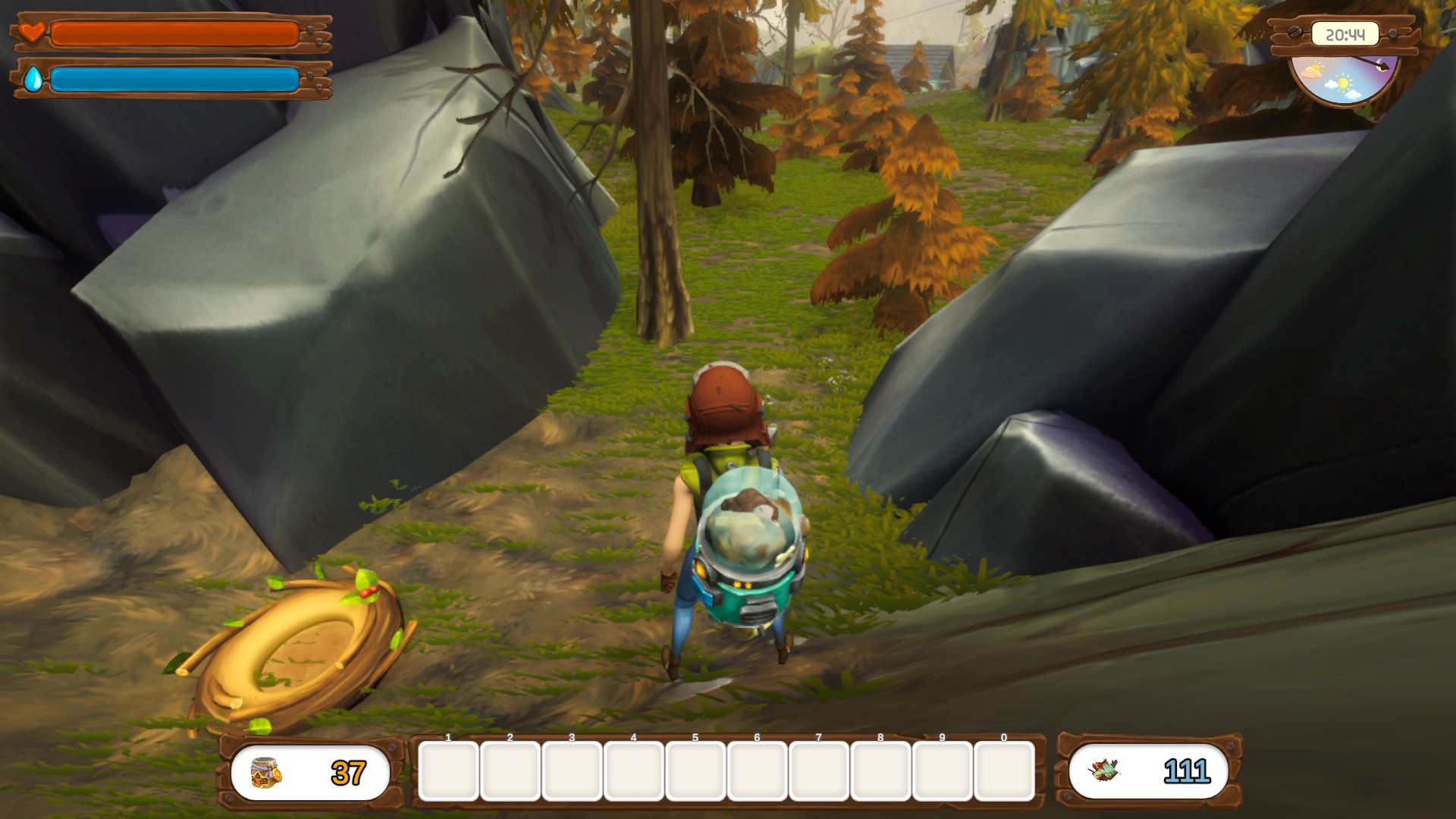 Starting at Jay, looking at her and her house, follow the cliff on the right of the house to an opening in the cliffs. Go left around the corner and follow the cliffs on your left. Remove all the rubble and find the nest in a small niche.

Feather of the Northern Cardinal 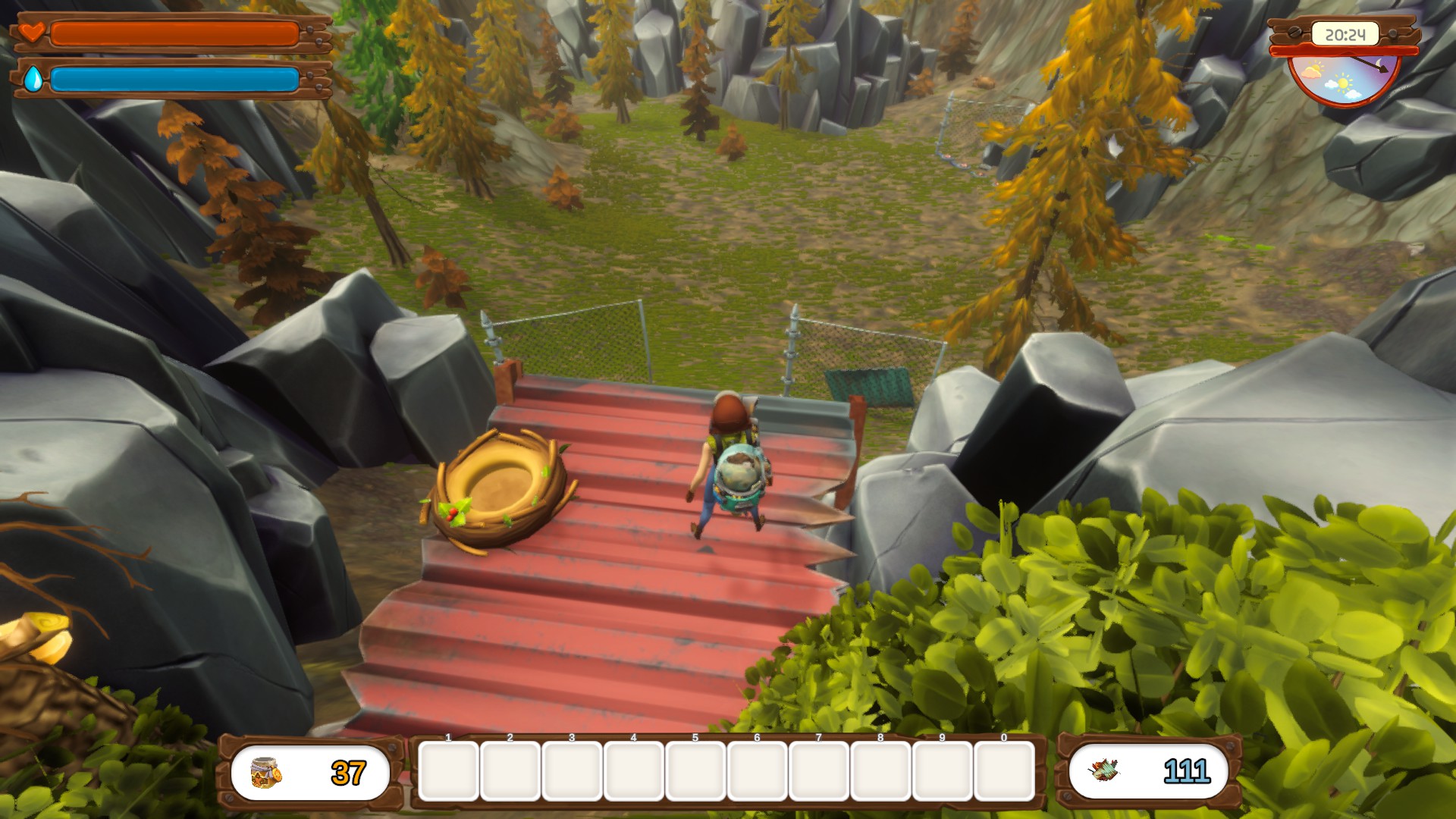 Starting at Jay, looking at her and her house, follow the cliff on the right of the house to an opening in the cliffs. Go right around the corner to a small lake. Half way behind the small lake is a rubber trash heap or a golden bush, if you already removed it. Directly behind the bush, you will find a platform with the nest on it. (PS: Drop down from the platform for a golden suitcase with the bread recipe and to unlock a fence nearby)

Feather of the Common Pheasant 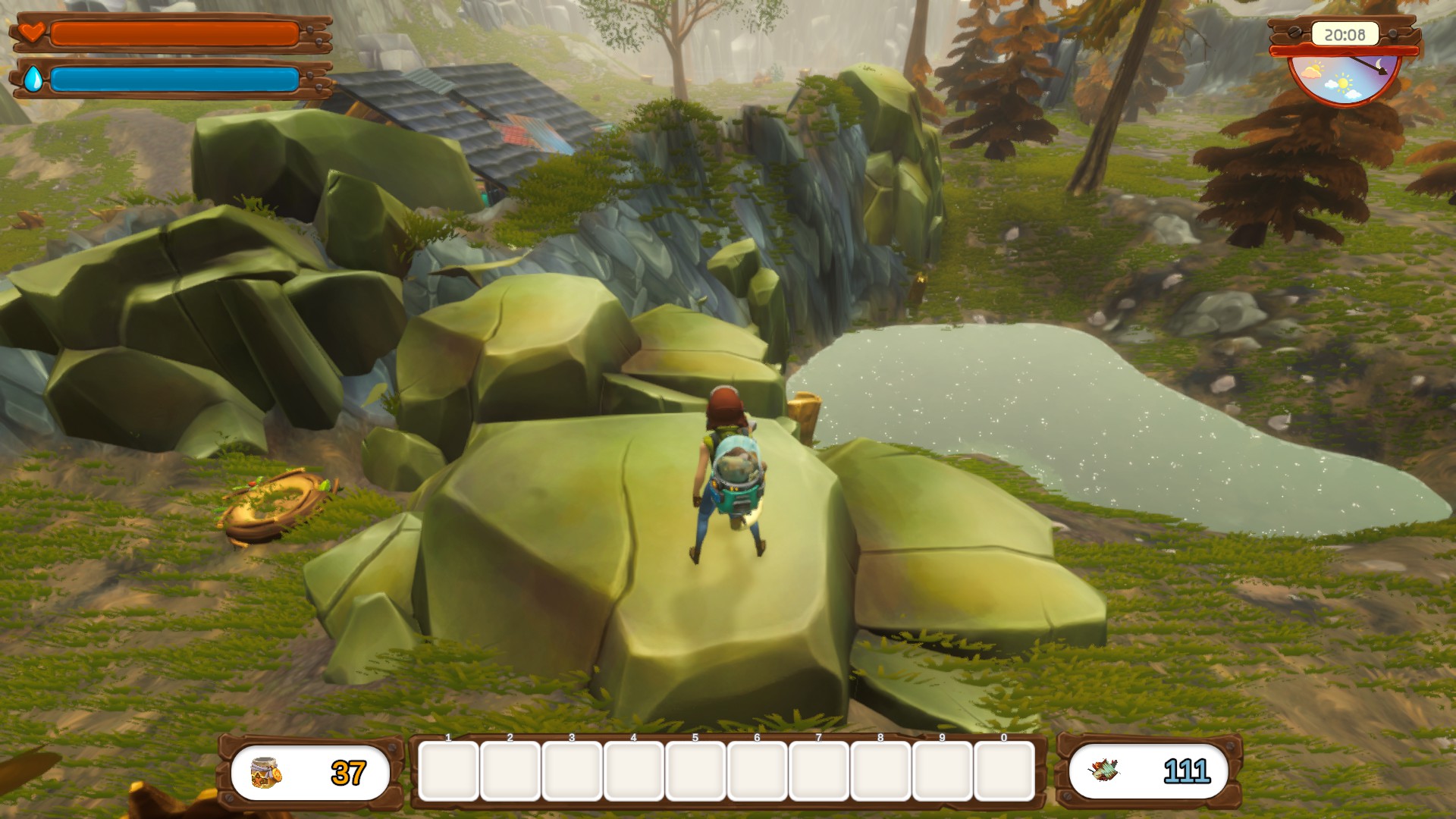 Starting at Jay, looking at her and her house, follow the cliff on the right of the house to an opening in the cliffs. Go right around the corner to a small lake. On the opposite side of the lake, behind some boulders and a lot of trash, you can find the nest.

Feather of the Frosty Waxwing 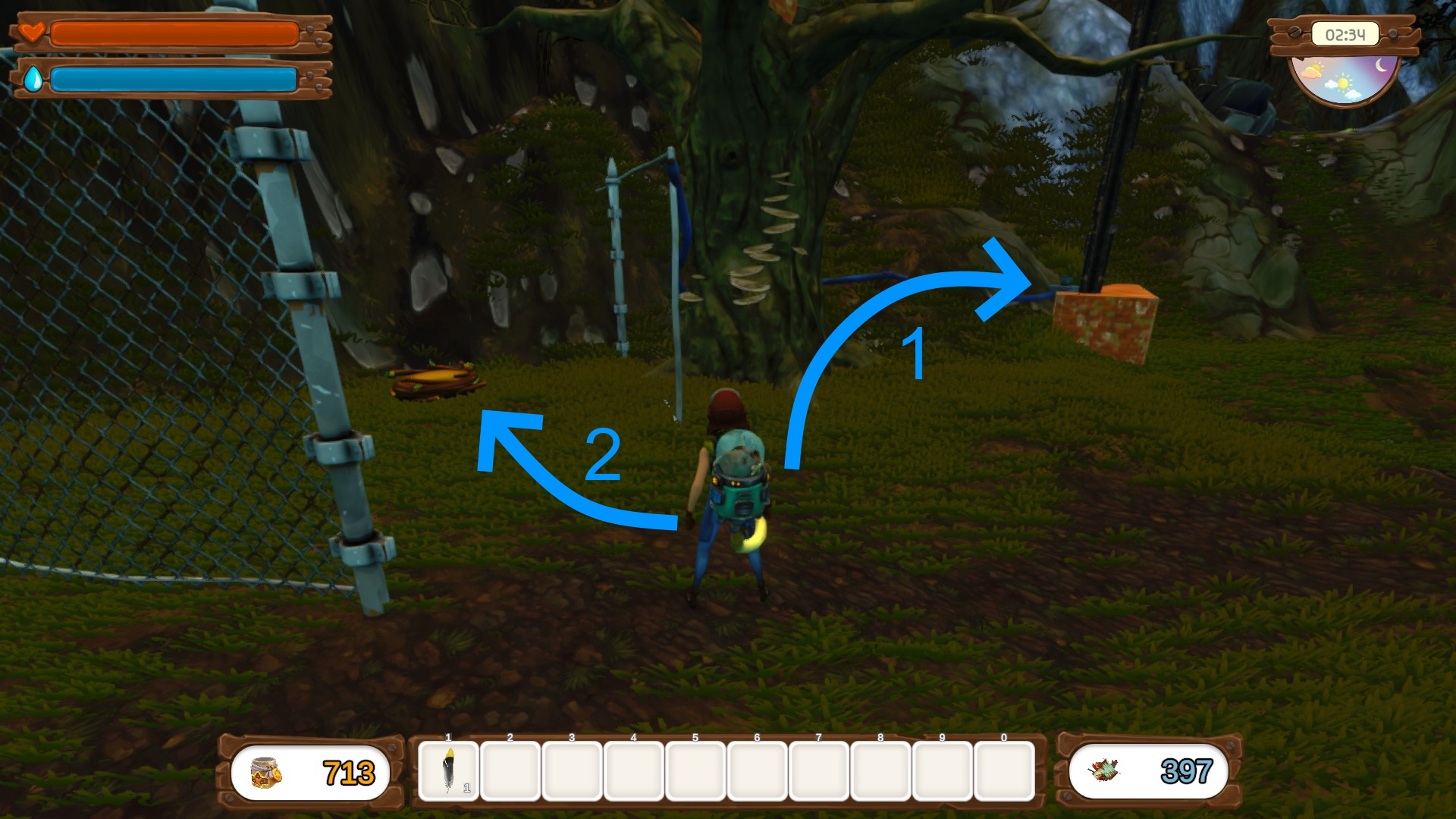 In the second section, just after the fast travel tunnel, go up the hill to the right. The nest is in a locked fence in between some trash. You open the fence door with a water activated button on a nearby railroad support column.

Feather of the Snowy Owl 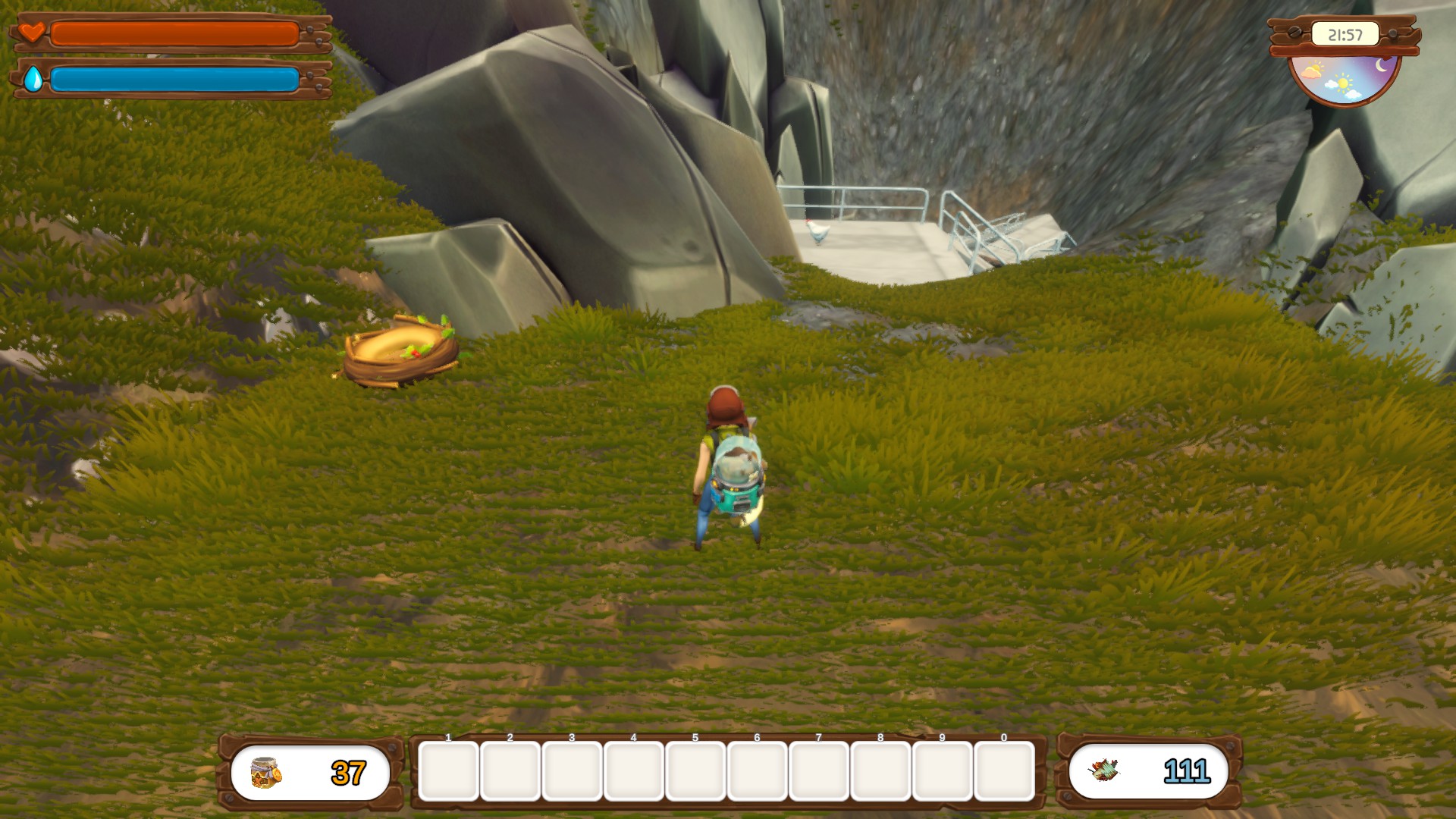 Credit to Rhyono – [steamcommunity.com]  for finding it and notifying me. In the version of my playthrough, it wasn’t there…

As of version 0.17.130 this seems to be no longer there. No new position has been found yet!

In the second section – the one with the fast travel access – go to the door to the fourth section (radio station and swamp) and turn around. On your right side, there is a small enclosed area, that leads to a spiral staircase down to a small lake. Just before the staircase on the left you find the nest.

Feather of the Junco 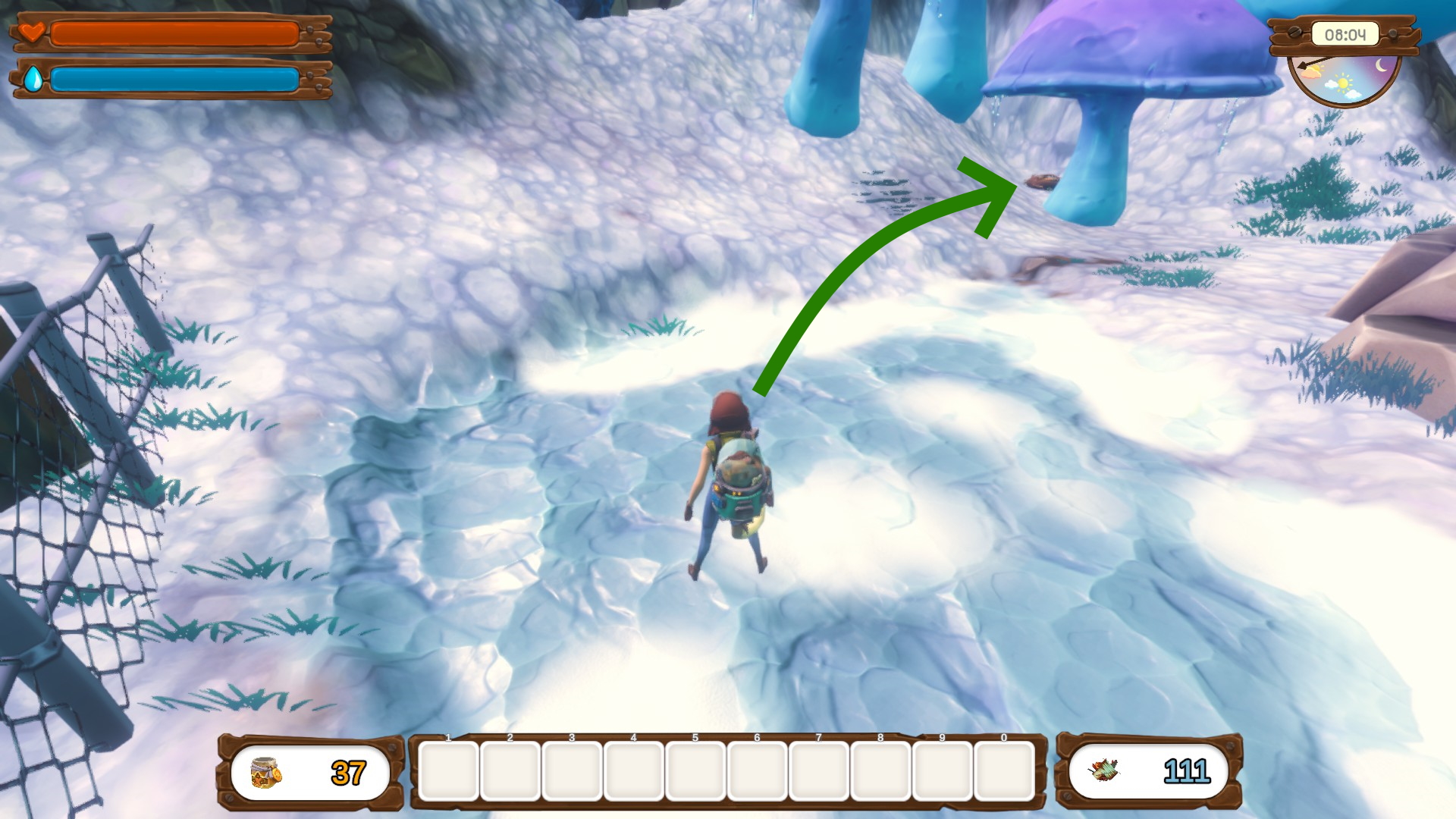 Until version 0.16, this was the nest for “Feather of the Mockingbird”.

In the third section of Frozen Peaks, where you meet Lilly, instead of going through the fence to Lilly, continue following the fence to the right. When it ends turn right. You should see the nest under a smaller variant of the giant mushroom.

Feather of the Bald Eagle 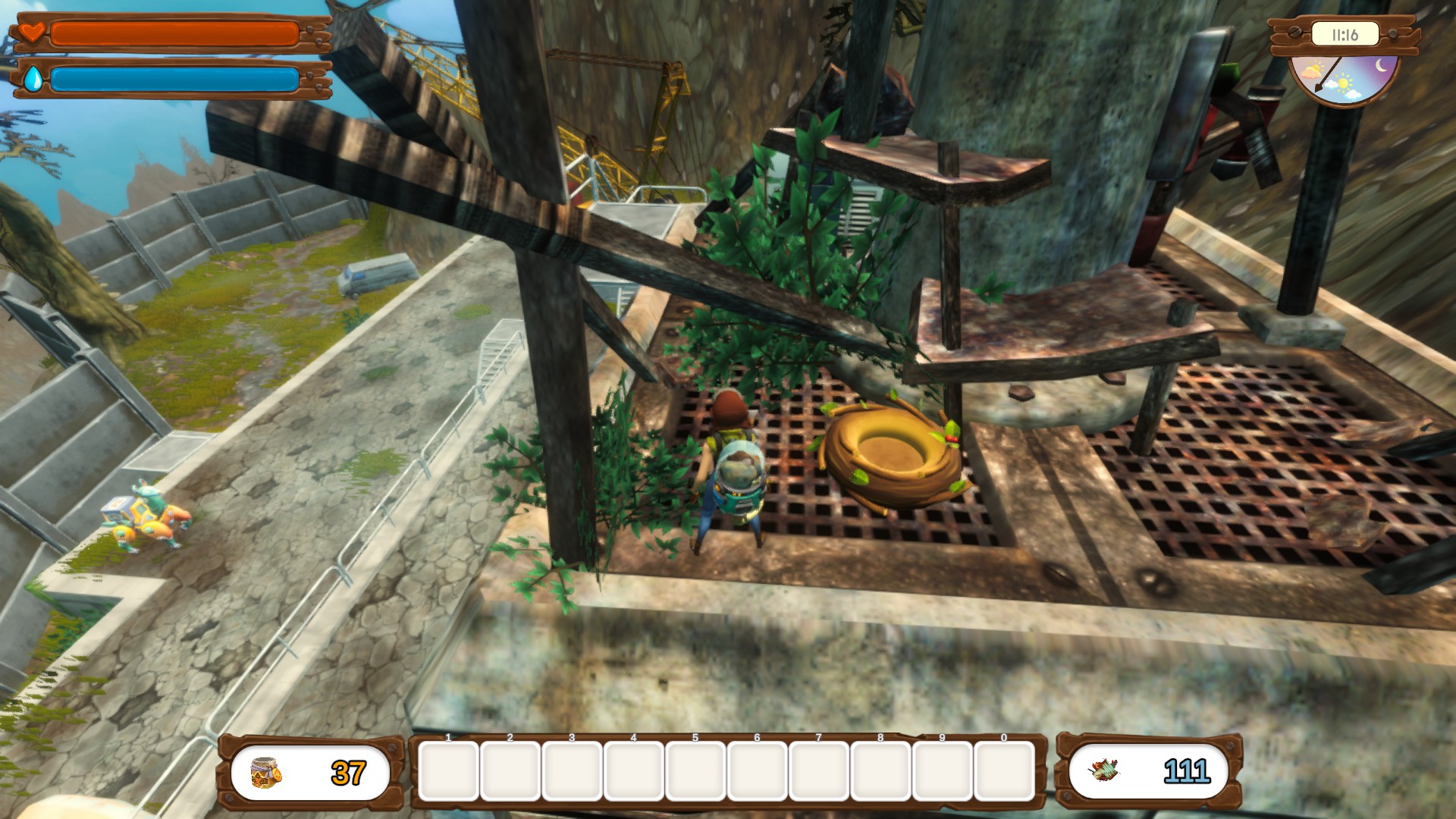 Contested: Several players have reported the nest missing. Even though my latest playthrough of the latest version was showing it.

Feather of the Sinister Shrike 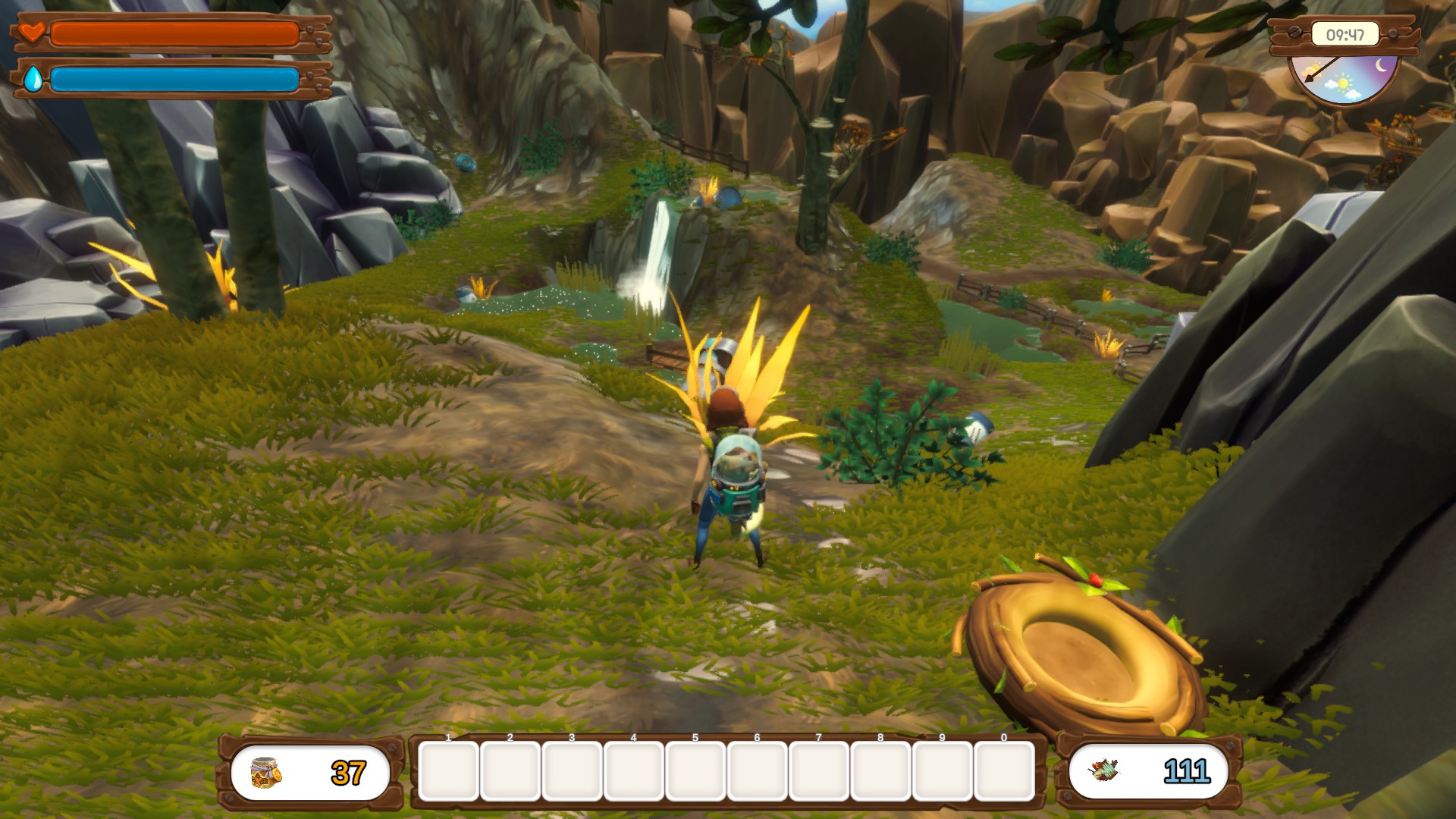 In the fourth section of Frozen Peaks, go to the area, where you have to install water filters (quest “Get Outta My Swamp”), the nest is on the left side near one of the water filter sites hidden under some trash.

I hope you enjoy the Guide we share about No Place Like Home – Feather Location Tips Guide; if you think we forget to add or we should add more information, please let us know via commenting below! See you soon!