How to create mods for NIMBY Rails.

At this time NIMBY Rails supports adding new train models to the game with Steamworks mods. Other kinds of mods may be added in the future. In this guide I will describe how these mods are structured, how to develop and test them, and how to upload them to Steamworks.

In the game systems, a rule is an object that contains constant, immutable data that controls parameters of the simulation. Mods are just a collection of rules objects written in an easy to edit text format, plus any required data in separate files, like textures.

Rules objects usually have an ID field, and often make reference to other rules objects by using their ID. When creating your own mods you must pick unique IDs for your rules objects, not used by the game or by other mods. IDs are arbitrarily long strings so it should be easy to come up with both unique and readable IDs.

All the objects declared in the mod have a schema field. This declares the version of the mod structure, and allows the game to load older mods. Use the schema value indicated in the rules tables in the next section.

At the time of this writting the game only supports train models known as (electrical) en.wikipedia.org – https://en.wikipedia.org/wiki/Multiple_unit. In MU trains the carriages are self-propelled and are usually part of a single whole train designed to go together. There’s still a distinction of carriages for the ends of the train and the inner carriages, and the game has support for this. In the future the game may also support custom train compositions edited in-game by the player.

The rules object TrainUnit represents the combined concept of a train car and/or locomotive. The game makes no distinction, and a TrainUnit may act as both concepts at the same time, depending on how it is configured. This is modeled after contemporary electrical multiple unit trains (EMU), which can have engines in every car. It is of course possible to declare a TrainUnit with no power if unpowered cars are desired.

The power field vs tractive effort

Engines are not currently moddable, so instead the TrainUnit only allows to specify a power output value in kW, then the game applies an internal formula to derive a tractive effort.
// tractive effort = K * (n * P / V) // tractive effort is expressed in N // K = constant // n = efficiency of motors // P = power in W // V = speed in m/s tractive_effort += 3.0681818 * ((0.9f * power) / max_speed); When deriving this value, keep in mind you are specifying its value per carriage, so divide accordingly for MU trains.

A mod is just a folder that contains a file named mod.txt. This file is formatted using the simple en.wikipedia.org – https://en.wikipedia.org/wiki/INI_file. Inside mod.txt you must declare at least one ModMeta section, and then one or more rules sections. 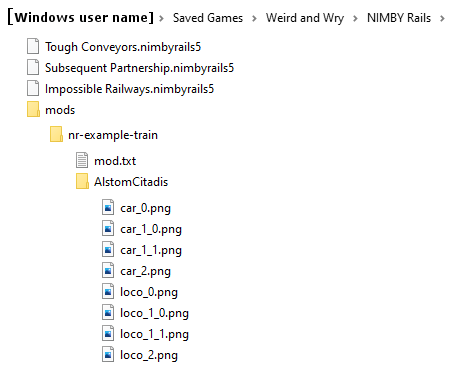 The only mandatory file is "mod.txt". You can also create any other folders and files required to organize and bundle textures in your mod.

This mod.txt file can be found in the github.com – https://github.com/weirdandwry/nr-example-train.

The ModMeta section gives some general information that is displayed to the user in the game UI.

In order to create and upload your mods to Steamworks, you first need to make sure your mod works properly as a local mod, and have it installed as such. So the first step is to develop your mod as a local mod, in your local mods folder as described in the first section of this chapter.

Once your local mod is ready, you can use the Steamworks mod uploader available in the Main Menu, Options dialog. 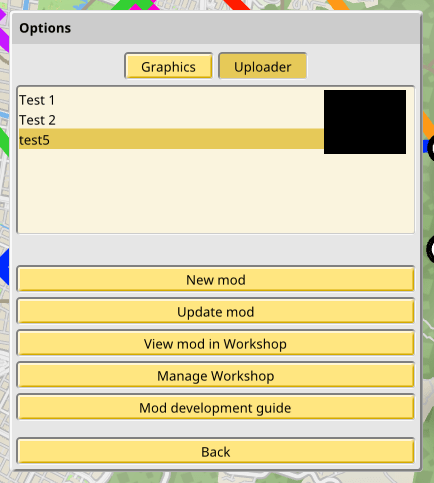 By default the mod uploader shows a listing of your authored mods already uploaded in Steamworks, and a series of options.

When you select "New mod" or "Update mod" the mod editor is displayed: 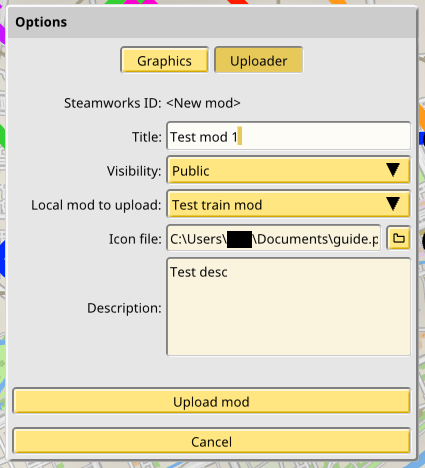 You must fill all the displayed fields before you can create or update an existing Steamworks mod.

You may find it easier and more usable to edit the description and update note fields from the Workshop interface than from the uploader interface, after the uploader is done creating or updating your mod.

Train units are drawn with 3 texture layers: base, decal and top. Every layer is a full RGBA 32bit PNG image of size 1024×128, which always corresponds to a real world size of 30m x 3.75m. Train units can be shorter and narrower than this size, in that case the unit must be aligned to the left of the image for the X axis, and centered in the Y axis. The real size of the train unit is then declared in the TrainUnit section of the mod.txt file (in meters, never in pixels). Use a conversion factor of 34.13 pixels per meter when drawing the textures.

You can store the PNG files in the mod folder with any name, and with any subfolder structure you wish to use, as long as you use correct relative paths to reference them from the mod.txt file.

The base layer is drawn first, and it can be colorized by the user in the train properties editor. For this reason it is recommended to make this layer grayscale. The colorization function is a simple component-wise color multiplication. Use this layer to represent the bulk of the train unit.

The decal layer is drawn on top of the base layer. It is also colorizable by the user, and uses the same multiplication function. It is possible to declare a series of decal layers in the same TrainUnit by separating them with commas. The user will then be capable of choosing one in the train properties editor. Use this layer as a decoration, to give the user more customization options. The user can also colorize this layer with the line colors.

The top layer is drawn on top of the decal layer, and it is not colorizable. Use this layer for final details and for parts of the train that should never be colorized, like windows.

Translation mods are structured in the same way as any other mod: a main mod.txt file which declares generic information about the mod, and then one or more sections declaring which language is being supported, and which dictionary files are to be loaded. Read the "Mod structure and development" section on how to create local mods for development, and how to upload your work to Steamworks.

To make a new translation you will need to customize github.com – https://github.com/weirdandwry/nr-local-spa to your language. This translation is kept up to date with the game, so on new versions you will be able to also track the changes in your own translations. Edit the mod.txt and game.po files as described in the rest of this guide.

Make sure to read what is the mod.txt file and its basic ModMeta section as described earlier in this guide. This is a complete example of a mod.txt file for the Spanish translation:

Only use ISO 632-2, 3 letter codes to identify languages, do not make up any random code or use the 2 digit codes. You can look up the codes in en.wikipedia.org – https://en.wikipedia.org/wiki/List_of_ISO_639-2_codes. Also always use UTF-8 file encoding, both in mod.txt files and PO files. No other encoding is supported.

The LanguageDict section declares a PO file as a translation dictionary for a given language ISO 632-2 code.

Translation dictionaries are a simple text file that repeatedly lists the strings to translate in the game. Edit PO files with any text editor that supports UTF-8 editing. For every string you will find 3 entries: msgctxt, msgid and msgstr. For example:

Sometimes strings contain arguments, indicated as {}, and your translated text MUST preserve these arguments. For example:

msgctxt "banner_join_friend" msgid "{} wants to join your game." msgstr "{} quiere entrar a tu partida."
You can locate the {} argument anywhere inside your string. Sometimes there’s more than one argument, and this is indicated by a series of arguments like {0} and {1}:

msgctxt "banner_prompt_nogame_join_user" msgid "{0} proposes you to join a game hosted by {1}. Do you want to join?" msgstr "{1} hospeda una partida y {0} te propone entrar a jugar. Quieres jugar con ellos?"
Again, if an argument is present in msgid, it MUST also be present in msgstr, but it does not have to be in the same position. Reorder arguments as you see fit for your language. Occasionally you will also come across more complicated arguments like {2:+.2f}. Just locate them in any position you decide, but don’t modify the contents. The game will actively reject your translated strings if their arguments don’t match, and it may even crash if your translated string is too malformed.

To test your translation in-game, first make a local mod in your Saved Games folder as described earlier in this guide. If it’s created properly it will show up in the Languages drop down in the Options dialog, and it can be immediately activated. Keep in mind a few strings are not properly updated when changing languages this way, like tab titles. Restarting the game will fix this.

Written by Weird and Wry

This is all about NIMBY Rails – Mod development guide; I hope you enjoy reading the Guide! If you feel like we should add more information or we forget/mistake, please let us know via commenting below, and thanks! See you soon!