I wrote up this achievement guide because it’s possible to get softlocked out of 100% if you get all the endings before getting all achievements. The game will give you the Completionist achievement and you’ll be stuck in a loop of going straight to the end once you let Keanu do his thing. I hope this helps.

damn bro how broke are you

Bro you are not hungry for pizza

The ice cream machine is broken

How dare you try to stop him!

Use that super high tech GPS over there > Nice Trick

Michael’s driving skills were on point

Not related to amo- nevermind

Got the Keanu Ending

damn bro you just got caught in 4k 244hz

Saved Idiot Bean! But where did Keanu go?

Got the Death Ending

You are an amazing terrorist

Shoplifted your own kind

Ay yo what the-

Will you date me? > Sleep > Anthony > Let Keanu do his thing > Completionist

Thanks for playing Scuffed Visual Novel

I left Rejected 🙁 for last because as previously mentioned, I was worried that getting all the endings would lock me out of the 100% so I pushed that achievement aside to delay Completionist. It was the last achievement I got for my first run (Completionist popped 1 achievement early). I ran through the game one more time on a spare account just to make sure I could get a full run where Completionist was left for last. Please post a comment if you found the guide to be accurate. 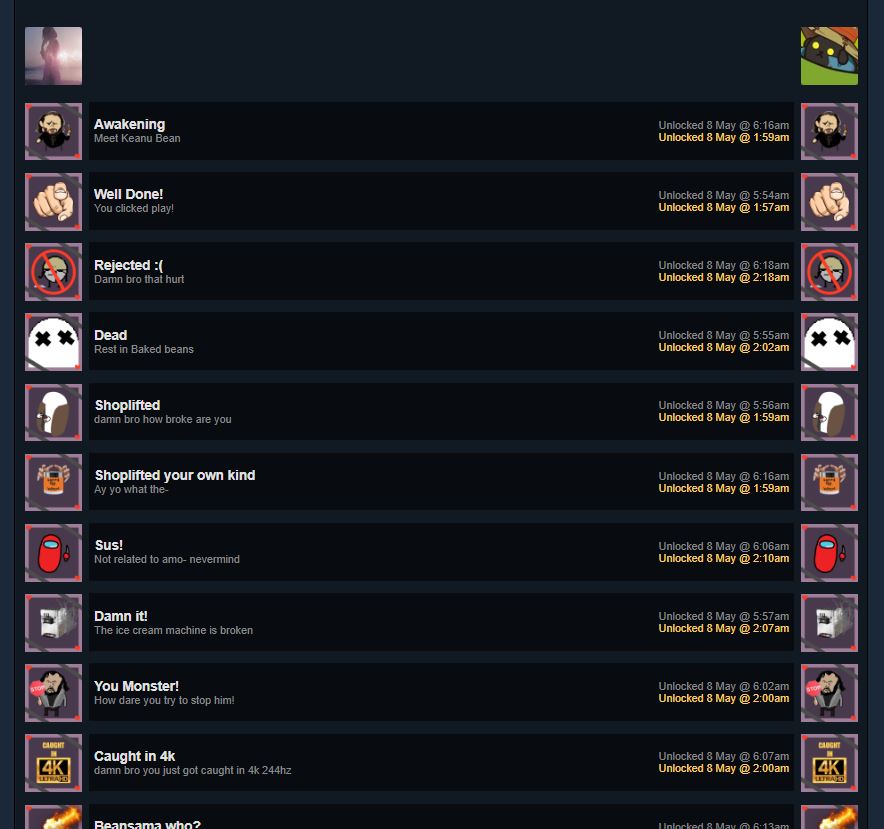 I hope you enjoy the Guide we share about *NEW* SCUFFED EPIC VISUAL NOVEL – Achievement Full Guide; if you think we forget to add or we should add more information, please let us know via commenting below! See you soon!