This is the basic Combat Tutorial. Which settings you should adjust and how to practice Muscle Memory.

Note: Hitting the ground does not get you a Combo anymore! This has been fixed. People won´t spin around much in duels anymore.


Sv added a new mechanic that make this unnecessary. You cna now feint Reposts after a parry ! I recommend everyone to watch this Video.


These Feints after a Repost are not easy to do. If you do them too slow and cancel the first attack too late, you will deal nearly no damage. Only use them if you can do them consistent. This takes some practice, but I love this new mechanic. That brings a lot more depth to the combat system. Now you don´t need to spin around anymore

The Spins were used because there was no alternative mechanics which we now finally have!


In the upcoming days, i will release frame data and do deep ingame Testing with Australian and US players. I ask the guy who made the frame data Video. I already tested it against US Players. Further Tests will follow. All experienced Players,

that I know block pretty much all of my attacks.


This technique is very situation-related. You can´t do these moves if the player is moving. These are used when a player has little HP and is in turtle mode. That means that he stands still and tries to block the hits if he is low HP. It does not shorten the animation. The timeframe of the attack, if you click left mouse to make a repost after a parry is the same as for a repost after a feinted attack, so you have the same time to react, but you might block in the wrong direction and have to switch your block stance. Because of this, the response time is not reduced but you need to switch the block stance more often.


In addition, these feints are very difficult to do. The frame window is so small that only the best players can carry out these attacks and they are not always consistent. If you fail, you wasted all the damage of the repost after the Parry.

I personally love it, because we need skill-based ways to get around the party.


It is a Duel Mechanic that won´t be used in Team fights. The enemies in Team fights try to go back when they are half HP and constantly move. It’s hard to do such moves if the enemies are running.


In Team fights, it is more likely that two players charge an attack from different directions and release it at the same time so that the opponent cannot block both attacks.


As far as I understand there will be ping normalization right? At least from what i got told. This means that a player who lives right next to the server will have an artificially increased ping of one hundred. Then the difference between the US players is hardly noticeable.


These Feints have already been used as openers before the Patch and tested by me and many other Players. E.g. the aborted trust attack when looking up, which is converted into a right Swing, which you can see at min 0.31 in the Video. It was used as an opener. A low damaging hit, that could be converted in a combo if it hits, which only has to be charged for 1 Second, instead of 2,5 Seconds. A lot of US Players have blocked this attack.


I’ve used this opener very often over the months.

I will contact Snasen for some tests. The Guy that made that Video.


Here is a video and a screenshot for new Players that help them to read the Spear animation, because new Players sometimes have problems seeing if someone attacks mid or from the right side.

As you can see in the screenshot, the player holds the spear further in the air during the right attack

and the forearm is bent back. The secret behind spears is to attack from the right angle so that the player cannot see the back arm, which is much farther away from the body during a right attack. You want to use the compass to keep the proper angle.


During the right attack you have to aim a little down so that the spear always keeps the same height during your middle and right attacks. 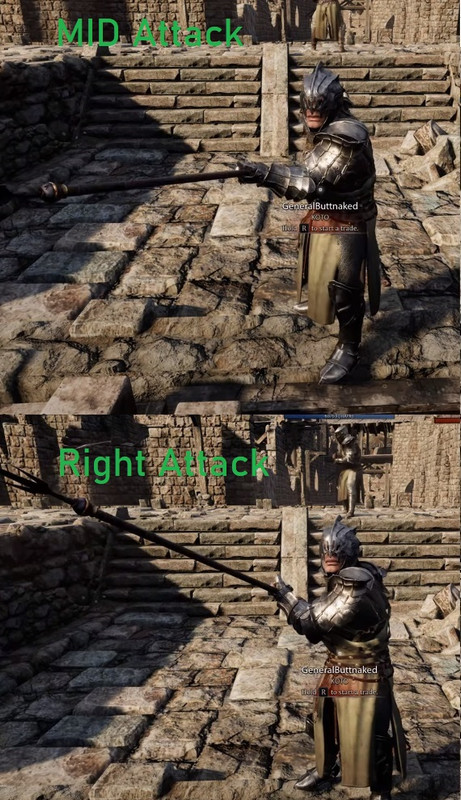 With the new mechanics (mentioned in the first Post) you won´t not see much Players spinning arround in Duels anymore, as you see me training this method against a spear fighter and overusing it to get a feeling for it.

I hope you enjoy the Guide we share about Mortal Online 2 – Video Tutorial on How to Combat Using Swords and Spears in Game; if you think we forget to add or we should add more information, please let us know via commenting below! See you soon!