I found a guide on this site that had loads of songs and I spent hours searching for songs from 1980-1984 that would work well for this game. All songs are from the 80s, but I will add 60s/70s tracks to any request.

There are a few good 80s music tracks that we can collect. You don't think it had enough flavour, or that there were just a few songs that were missing? Personally, I found some amazing songs from the 80s that could have been included in this game. However, they were unlikely to be licensed. With the ability to add our own songs, it's not a huge issue. Let me get into it!


For some lore nerds, this may also be true for them. ".

"You Spin Me Right Round" was released in 1985. I like to think that Big Boss is so passionate about music that he has Miller/Ocelot or the intel team to get early music copies for him. He was the first music pirate in the world, show some love.

How do I install the music?

It seems unfair to include this guide without giving you instructions on how to install your song now, doesn't it?


First, you will need.mp3s for all the music that you wish to add. We all have our ways of getting these and I'm sure. Some people can figure out how to get them but I won't link or endorse anything with a skull and a big black cap.


Once you have downloaded/purchased your MP3s, you will need to place them into this route directory. \Steam\steamapps\common\MGS_TPP\CustomSoundtrack This is usually found in the Program Files(x86 folder. For most people it's not. Drag and drop your songs into this folder. For easier navigation, I strongly recommend using proper titles/band name. For example, I used the naming system in this guide.

Ok, I've pre-ambled enough, haven't you? Let's get to the point. I am listing them alphabetically by band, not their release years. However, I will try to be helpful and place them wherever possible.

Benetar – Love is a Battlefield September 1983


Culture Club – Do you really want to hurt me? September 1982


Foreigner – I Want To Know What Love Is November 1984


Katrina and The Waves: Walking on Sunshine 1983


Men at Work – Down Under

Safety Dance for Men Without Hats 1982

Rolling Stones – Start Me Up August 1981

Twisted Sister – We Are Not Going to Take It April 1984

This is my personal playlist of songs. I find they add to the game and give it a more 80s feel than any other tracks. I recommend to anyone doing the Africa Chapter to set your Helicopter Speakers to (if you have researched them to "Toto-Africa". 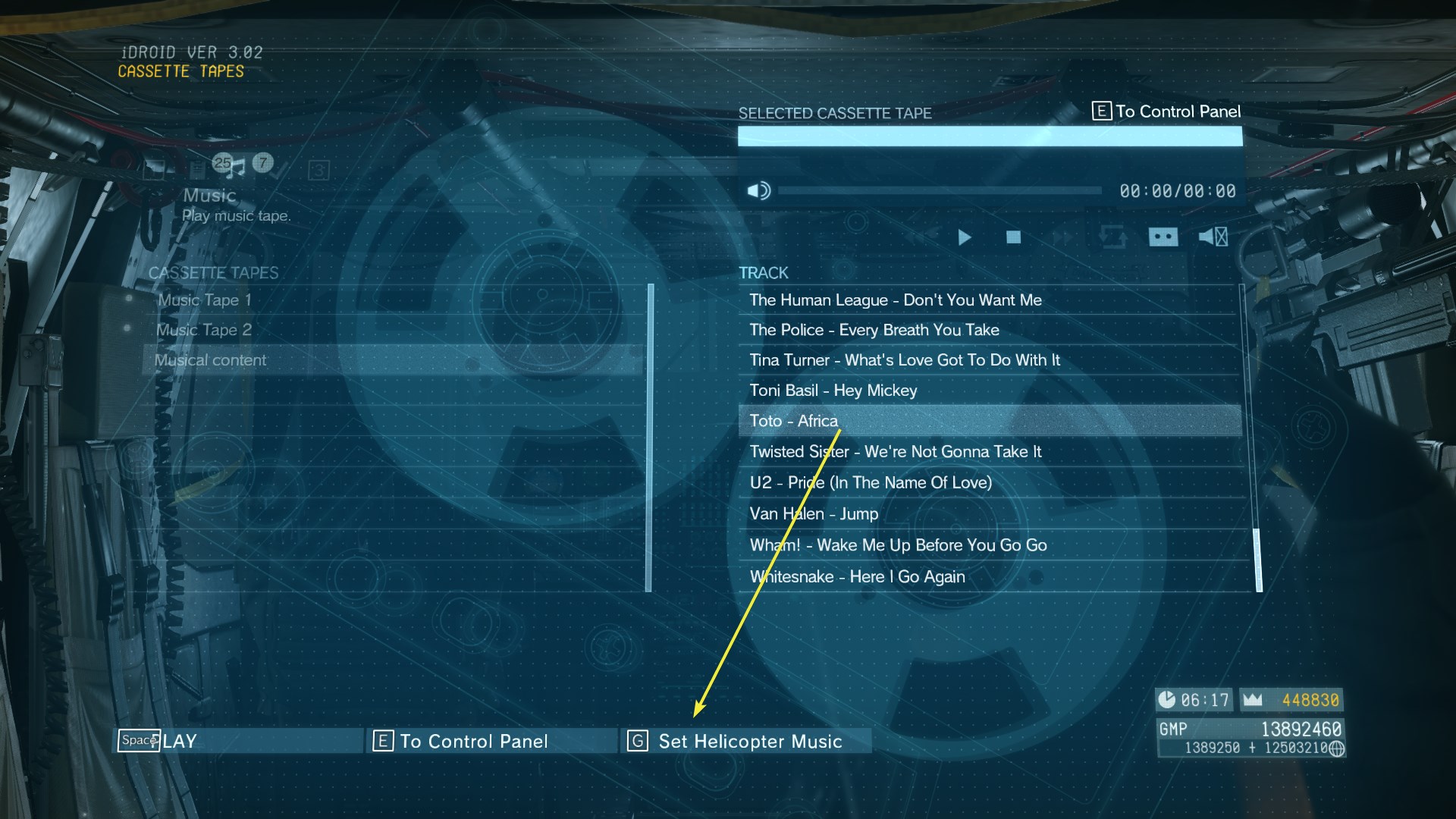 Hope you enjoy the Guide about METAL GEAR SOLID V: THE PHANTOM PAIN – How to Add Music in Game, if you think we should add extra information or forget something, please let us know via comment below, and we will do our best to fix or update as soon as possible!