In this guide I will try to cover all aspects of FOB ghosting and give you some tips to help you on your way to becoming a master in FOB ghosting.

Intro: What is FOB ghosting?

FOB ghosting is an infiltration style which revolves around successfully reaching the core of an FOB without triggering combat alert even once. Hardcore FOB ghosting involves never activating Reflex Mode, so you can get a tremendous amount of bonus ESPG points.
This method is massively used by players who pursue high ESPG ranks due to the whole game being extremely rewarding in terms of being steallthy and not killing anyone.
Additional advantage of this infiltration method is that opponents you attack cannot retaliate.

There are many reasons. Most obvious ones are: 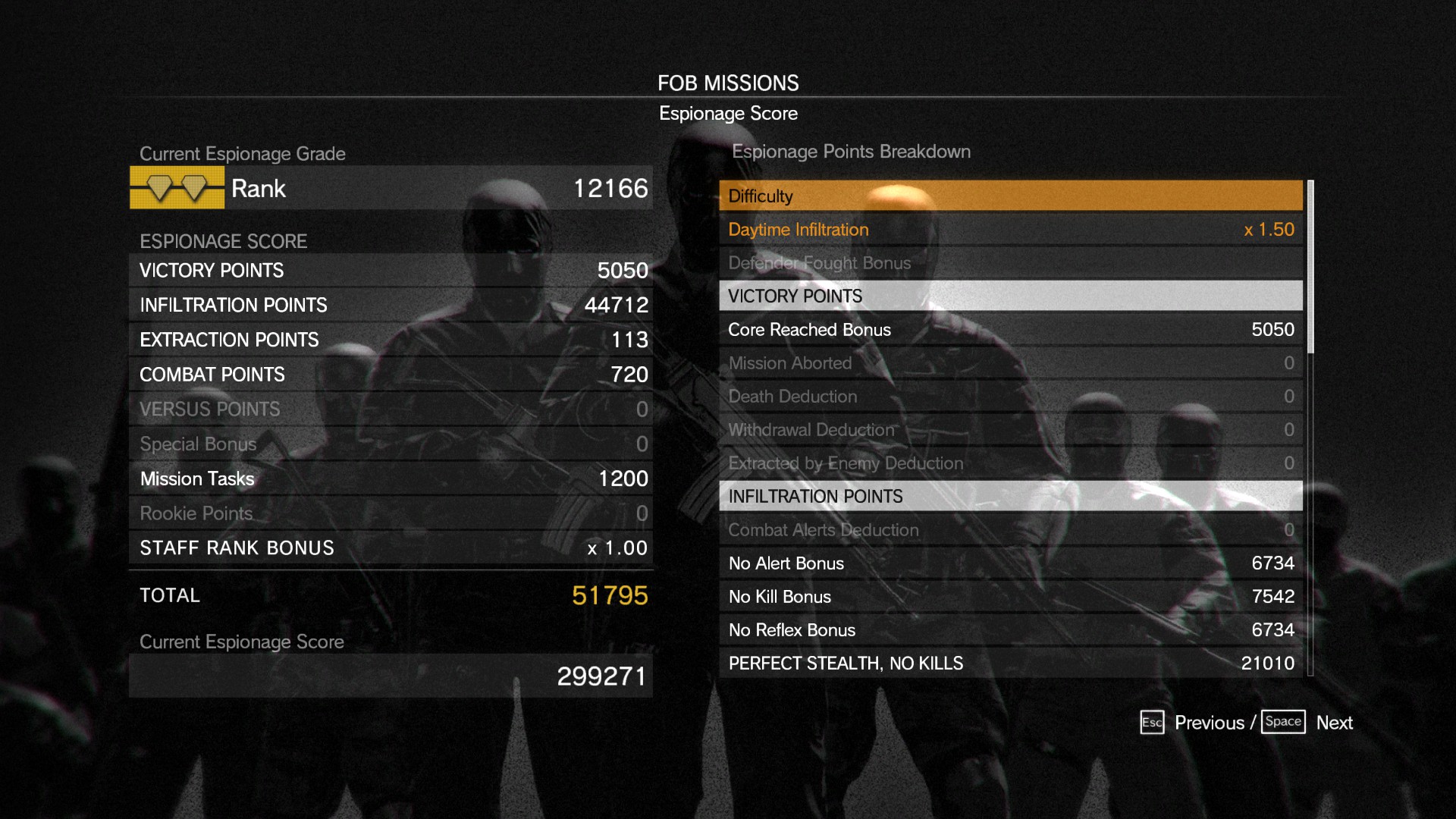 Choosing weapon loadouts extremely up to your personal preference, as each player has their own weapons they are used to. My personally favorite basic loadouts for FOB ghosting include:

(Loadout for FOBs with equipment grade lower than 9, where guards can be 1-shot stunned by S1000 AIR-S) 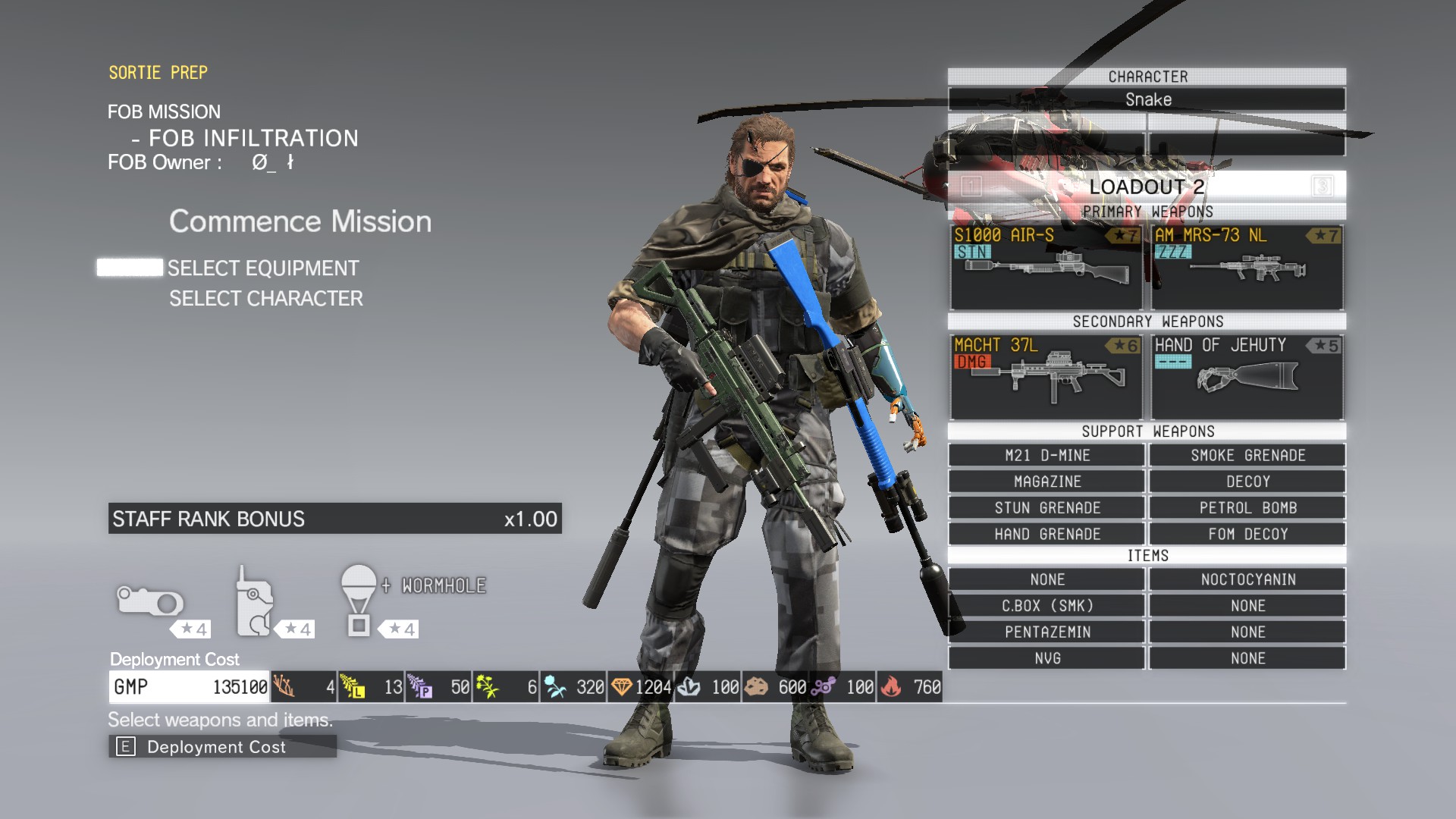 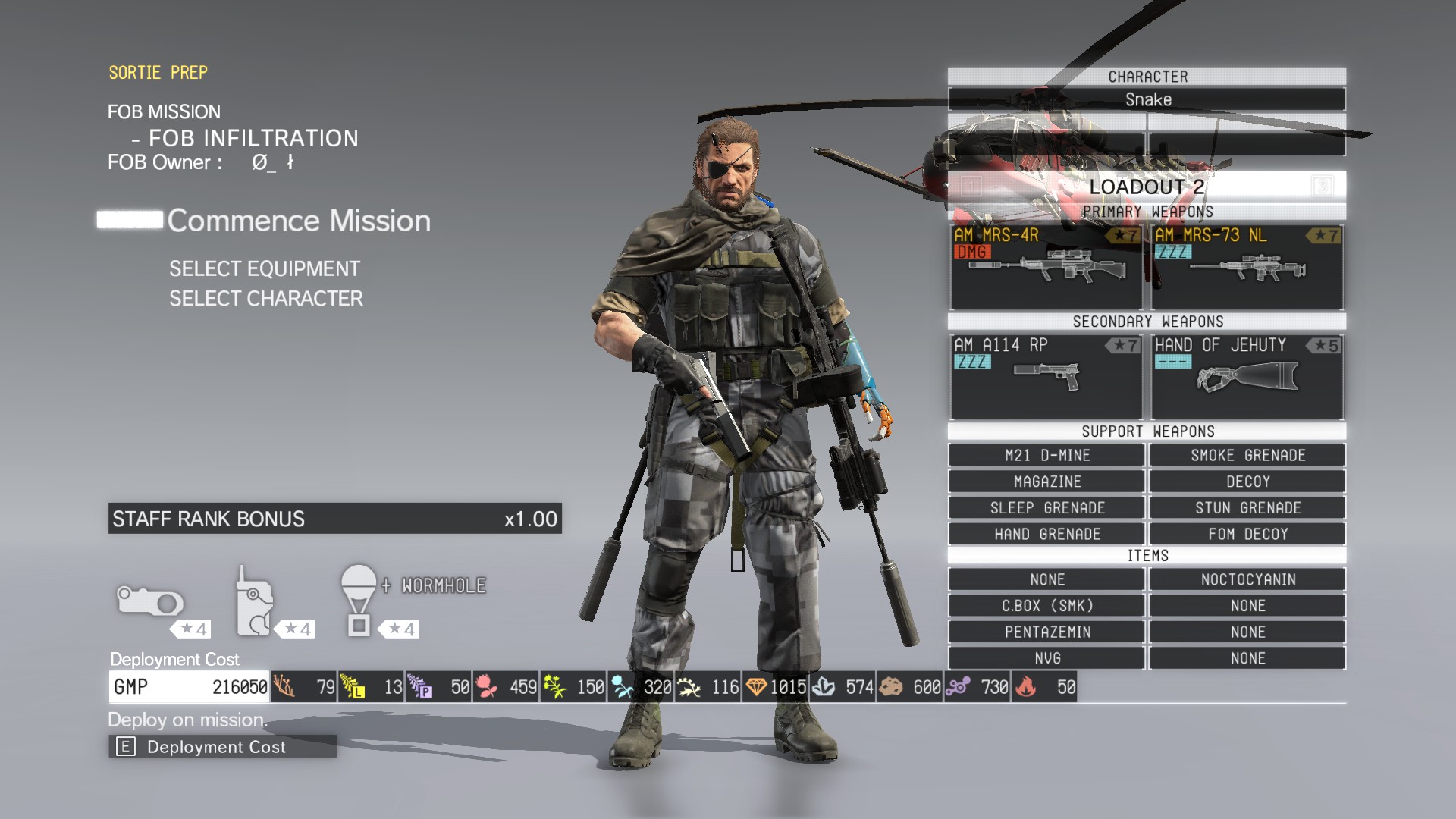 Again, these loadouts are my personal favorites, use any loadout that works best for you.

Analyzing a platform you’re planning to ghost has a crucial role in majority of decisions you are going to make during mission sortie and during the infiltration. Remember that you have unlimited time to analyze the platform you are about to ghost, so take as much time as you need to make sure you got everything covered.
These are some critical aspects to pay attention to:

This chapter will be divided into parts so I can explain each part of the infiltration process.

When you are on the drop in point selection screen, always choose the point that looks like the one given on the screenshot, as it gives you the shortest and easiest clear of the beginning deck: 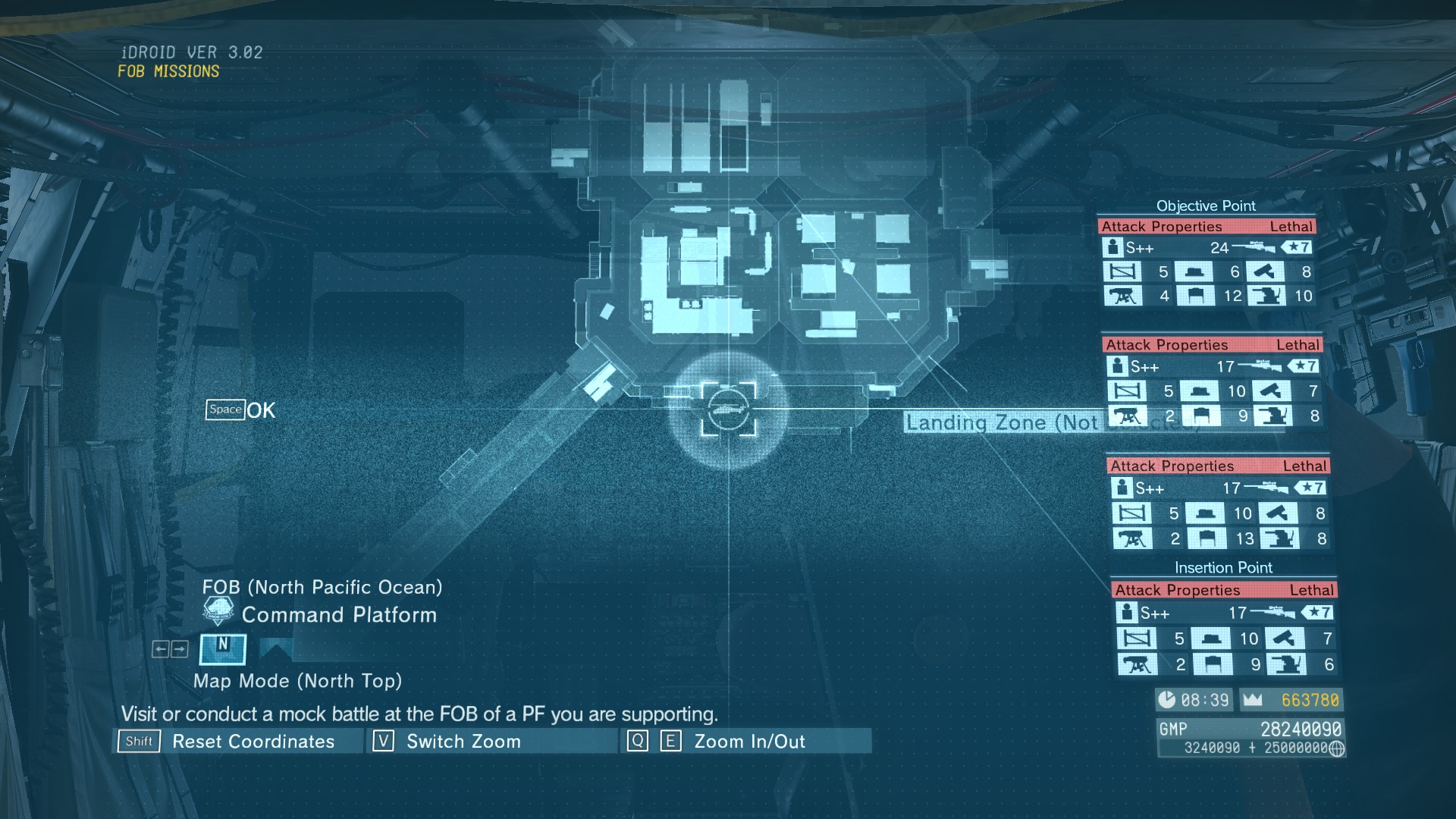 Bridges between decks are usually not hard to go through, but more experienced players place the custom Mines overlooked by cameras on choke points to drastically lower your chances of not being detected and so, reaching the core. But every single one mines formation has a weakspot where you can almost painlessly go through. One tactic of avoiding them is given in this YouTube clip:

IR-Sensors are placed on catwalks and alert enemies whenever you pass through the beam emmited by them. There are 2 ways to deal with them:

Antitheft devices are placed close to majority of containers and gun emplacements. Level 1 Antitheft devices won’t trigger when you pass by them, but don’t risk testing if they are level 1 or higher. There are 2 ways to deal with them:

Surveillance cameras are placed on many spots around the platforms where intruders are expected to be seen when infiltrating.
There are 3 ways to deal with them:

UA drones are overlooking the random spots on the platform over the time. If they notice any guard taken down, guards will be called to investigate and moderate alert will be raised immediately after.
There are 3 ways to deal with them:

Not very much to be told here. Just wanted to mention that, if guards don’t have NVG equipped, your Smoke grenades are extra effective 😉

Chapter 6: Reaching the final deck of the platform

Core reaching difficulty: 7/10
When trying to reach core of Command platform, the most important thing is to reach central building, along with it’s corridors and stairs up too the core. However, be aware that this is the place where you will always find some guards just behind the corner. Defenders also like to camp here, but it’s also easy for you to CQC them in these kind of spots. Just make sure you take off the right guards that overlook your passage to this building and you will be good.

Core reaching difficulty: 7/10
Combat platform is quite similar to command platform in it’s properties, so practise same techniques asas for the previous one.

Core reaching difficulty: 5/10
This one is not that hard at all. You can literally climb up the pipes all the way up to the core and reach the core with little to no problem. Just be aware to the UA Drones overlooking catwalks outside of the main building on the platform, because being noticed while on the pipe means instant combat alert.

Core reaching difficulty: 4/10
This one is pretty much easy. You can literally come all the way near the core, take down 3-4 guards patrolling there, blind the camera overlooking the very entrance to the core and finish your infiltration successfully.

Core reaching difficulty: 3/10
In my honest opinion, this is the easiest platform to infiltrate. You can take down guards watching the entrance to the “bunker” where core is located, get into there and quite easily reach core. Just watch for cameras and 1-2 guards that might be there from time to time.

Core reaching difficulty: 10/10
Ohh yes, this is the absolutely most painful platform that could be made. Try disabling the power source for the cameras at the very first. Then make sure to mark every single UA drone patrolling the very inside of the Intel Platform main building, where core is located, as being seen only once by UA drone while climbing the ladders (which you must climb in order to reach the core) means instant combat alert. Be extremely cautious and don’t rush at all.

Core reaching difficulty: 4/10
This is one of the easier ones too. Basically just make sure you don’t bump into any guard unprepared, plus watch out for the camera overlooking the core entrance, plus the one one level higher.

This is the basic (not very final) version of my guide which will be updated regularly to give you even more intel on how to be successful at ghosting.
I will look into any suggestion for improvement of this guide you give and implement something new according to that.
Guide created: 20th of Jun 2021.
Updated on:

I hope you enjoy the Guide we share about METAL GEAR SOLID V: THE PHANTOM PAIN – FOB Ghosting Gameplay; if you think we forget to add or we should add more information, please let us know via commenting below! See you soon!