An FAQ to help new players coming into Legion TD 2 for the first time.

Hopefully this can answer many a question and will be updated over time.

If you have a question that is not answered here, please do not hesitate to ask.

Legion TD 2 is quite well balanced in terms of units across the board. For new players, it’s recommended to stick with Lock-In and keep locking in the same unit to use as an opening (Yozora is a great choice). If you’re ready to move on from Lock In, would recommend Greed. It’s sort of the “staple” choice in competitive play, and it’s simple.

Highly recommended to check out the Openings and Mastermind Lock-Ins for Beginners – [steamcommunity.com]  by Jules.

How many workers should I aim to have?

This is very well covered in the Official Gameplay Guide – [steamcommunity.com]  with the relevant part of it posted below from the guide. 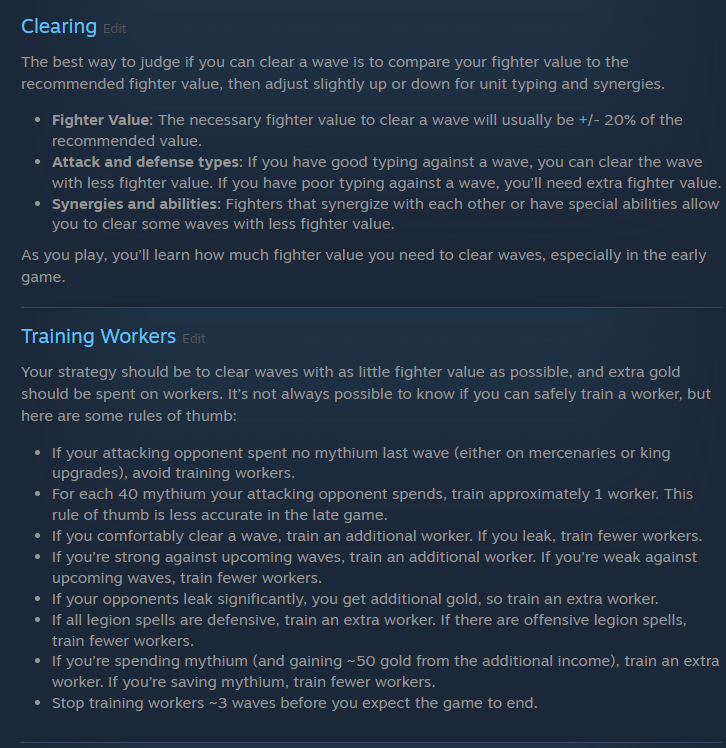 Why does the recommended value change and what does it mean?

Like this you can make an educated guess on how hard your opponent pushed.

How do I view my opponent’s lane?

During either the build phase, or wave you can press TAB and Space together to view your opponent’s lane. You will only see what they build from the previous wave due to the fog of war.

Alternatively, during a wave, you can press 3 and see your opponent’s lane battling.

How do I build in the same lane (cross) as my team mate?

This is known as cross building and only possible in classic (4v4).

What are cards used for?

You can use cards as avatar, set them as a monument on your profile (to display a statute ingame on your lane) or donate the cards to your guild for guild XP, or just treat them as collectable.

Why do guilds cost a high amount of essence amount to make?

Worth noting as well that you don’t have to worry about your essence, if the guild declines your application.

What benefits do I get from being in a guild?

You will gain bonus essence for playing whilst being in part of a guild and every guild level after 10, gain free premium essence.

So there’s two currency types (as you kinda expect these days).

With this you have to pay for it, but you can also earn it by being in a guild and reaching level 10. Then every level you earn some premium currency.

The only thing in the game you can’t use the essence (free) for in game is cosmetics, which change the skin of a unit, or there is also a background you can buy.

Otherwise, you can use both currencies to do things such as buy cards at the trade shop (can be used to change your avatar / put in your lane as a monument), change your name, and some Mastermind options. Nothing P2W and you’ll get enough currency to get all the Mastermind options very quickly by doing the weekly challenge/tutorial/campaign.

Why is there no 1v1 queue right now?

We cannot add another queue right now, since it would split the player base and harm matchmaking too much.

Why didn’t we consider 1v1?

The game started as 4v4 as a mod in Warcraft 3, and it’s now 4v4 and 2v2. Even going to 2v2 was considered a big deal for many players at the time. I think the game could be very fun as 1v1, but it was hard to jump to 1v1, especially with the history of the mod being 4v4.

As a permanent queue? Maybe – if the player base allows for it.

You can only use these when -debug mode is enabled, which is automatic in the Sandbox mode.

Hope you enjoy the Guide about Legion TD 2 – Legion TD 2 FAQ, if you think we should add extra information or forget something, please let us know via comment below, and we will do our best to fix or update as soon as possible!