Percent is the amount of hp per shot, with 100 percent being one shot.

This guide has been updated to version #2. It is currently being updated starting at #5

However, if your opponent has a Bulletproof Vest, you will lose every fight with it.

The knife is one of 2 melee weapons in Impact Point.

At the moment, the only assault rifle in play is the Assault Rifle.

Crossbow is a weaker version of the sniper that deals high damage and low BPS. It has a higher BPS than sniper, but less damage, and is similar to the SSG to AWP.

The Shotgun is limited in range, but compensates for this by firerate and damge

The MP5K is a combination of the pistol, ar and high damage rate, movement speed and BPS.

The handgun is a terrible gun. It has no movement speed.

Minigun is a great weapon in the game, with high firerate and low damage.

Chainsaw is one of the melee weapons in Impact Point. It is a melee weapon that differs from the knife in that it has twice the BPS and a longer reach, which allows you to kill enemy's farther away.

The Revolver is essentially the Deagle from CSGO. That's enough said.

Bulletproof Vest: Blocks the incoming damage of the next hit.

It doesn't matter how many Damage this hit caused, it's best not to deal with Bulletproofed Players with a fast-firing weapon.

If you survive the round without your Bulletproof Vest saving you from a hit you can start the next round with your Vest still on.

There is no health bar in this game. However, you can monitor your health and the health of your enemies by paying attention blood loss.

You will also move slower depending on how much blood your body has lost. There is currently no way to heal yourself during a round.

You can see further than your view model if you hold shift and X, and you can also use this to peek at gun spawns and other things.


Pressing O will kill you. This is only useful if your stuck.


If the escape key is lost, you can use p for access to the menu


If someone is pushing you, close the door. When they open the door, the door blocks the first few bullets. If they have a sniper, it's an easy kill. You should not push someone into a room that has a closed door unless absolutely necessary.

Your Movement Speed can also be affected by equipped weapons

With nothing equipped and Melee being fastest.

The Minigun and Sniper Rifle, on the other hand, are the fastest.

A rule of thumb is that the faster the weapon, the more it can be used. This is except for unusualities like knives. The gun's size will usually tell you how fast or slow it is. For example, a large gun means that it is slow.

META (What guns to use)

What guns to use updated to 3. The meta can be divided into 2 parts, with or without body armour.


This is a common sense game.

I recommend that you use a high BPS weapon if your opponent has body armor. The body armour will break no matter how hard the shot hits so it is important to get it out as quickly as possible. For this, the Minigun is the best choice but the Mp5k is also a good option. I would steer clear of slower guns such as the Sniper or Assault Rifle. I recommend the Chainsaw for melee weapons against body armor, as it has a greater reach and faster BPS.

My Take on Guns


Sniper Rifle, Minigun and Minigun are the only ones that you should be using unless melee combat is your preference. The damage done by the Shotgun, Crossbow, and Assault Rifle is the same. However, the Shotgun's range of fire is limited and the Crossbow and Shotgun shoot slower than the Assault Rifle. Always choose the Assault Rifle. I would recommend that you never use the Pistol. It is just junk and slows down movement, making it more difficult to obtain a better gun. Body armour OP. MP5K is the Minigun, but it's still better than the body armour. Revolver is a mid-sized weapon that looks a lot like the deagle in csgo.


These are my top picks and the guns you should consider buying. 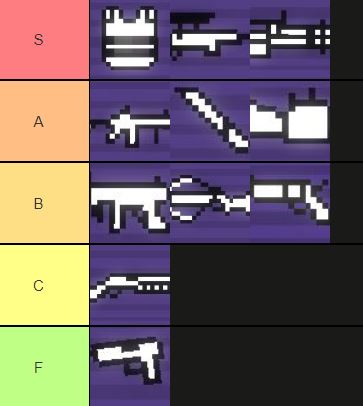 I just added some information to the guide form. I am currently working on the wiki to make an impact point. Once that is done, I will post the link. please give steam point to https://steamcommunity.com/id/SoKerakasven – [steamcommunity.com]

Hope you enjoy the Guide about Impact Point – All Weapons & Stats, if you think we should add extra information or forget something, please let us know via comment below, and we will do our best to fix or update as soon as possible!