Slowly make your enemies pay for what they did to you.
In this guide you will learn how to use poison, traps
and fulfill the support role in your trio.
No one will access the boss lair, unless you want to.

The objective of this guide is to present you a fun way to use Poison and Traps in order to control your enemies movement and access to certain areas in a supportive way.

This guide is not suggested for new players and also to people that focus in a very agressive playstyle.

To fully enjoy the use of traps and poison you need to be smart and cautious and also try to predict your enemies movement. 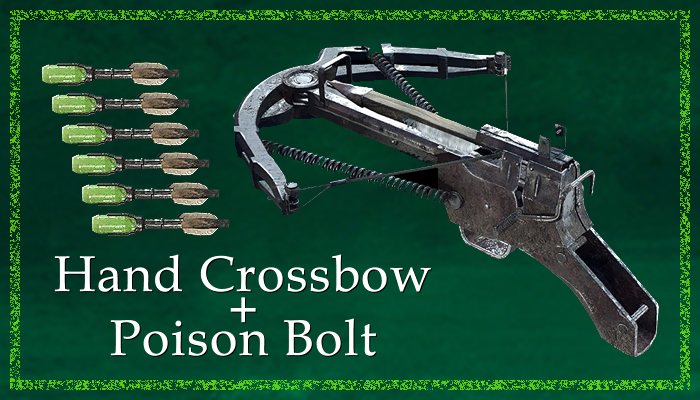 Your main gun is the Hand Crossbow equiped in, both special ammo slots, with Poison Bolts (in order to have more ammo).

The idea is to use mainly against AI, but also to prevent other hunters to access certain areas, to rush towards you or even to escape.

Since the main reason to have this gun is to control AI around you and your team here’s a list that shows the damage over every monster: 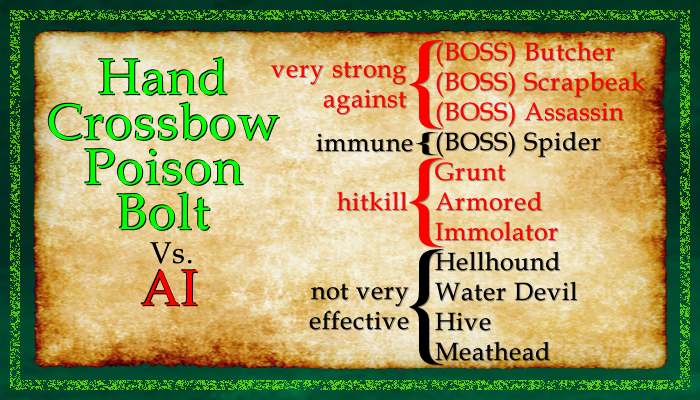 Butcher and Scrapbeak are very weak against poison, just hit them 3 times with poison darts and leave the lair while they are in frenzy. After their frenzy ends, enter the boss lair again and hit them more couple times, it will be enough to put them down.

To kill the Assassin it will be not a so different strategy, the only thing is that it will take a little more time to do it. The main focus against assassin is to hit the bottom of his body, don’t aim the bolts in his body, but aim at his “feet”. In this way it will make him take even more damage.

As I mentioned in this list, Spider is immune to poison, so let your teamates kill it, or if necessary, find a melee and do the “old way”.

All other AI in the list, as you can see, its self explanatory. 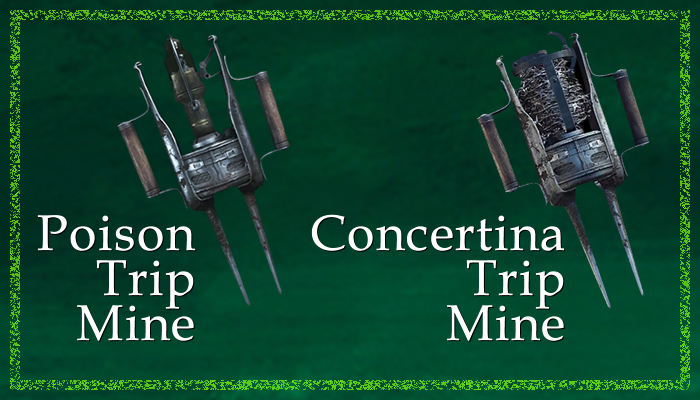 Poison Trip Mines and Concertina Trip mines will be the most important tools in your Plague Doctor build.

Heard any shots? Probably they will come from some source of sound or even in the opposite direction that you and your friends came from.

You can also set the traps behind doors, but most of players will look for it, so just do it if you don’t find any other good places.

Two good places I usually like to look for is shallow waters (yes, you can set traps there) and tall grass.

Here’s your main setup for your traps: 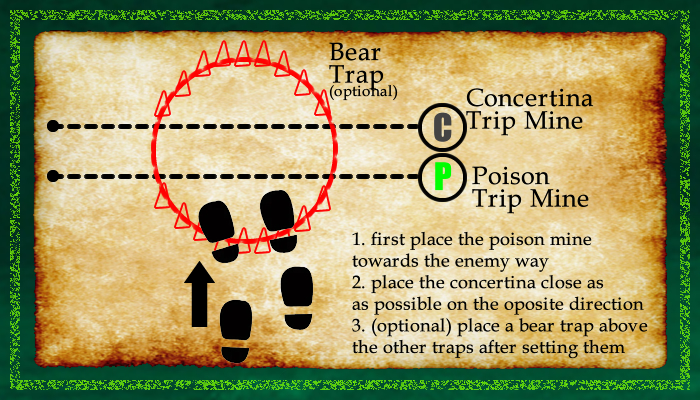 (note 1: in order to place bear traps over trip mines you need to set the mines first, if you try to place the bear trap first the game will not allow you to do it. note 2: this setup can instakill an enemy hunter, most of the times.)

Medkit (obviously): Since you are going to carry Vitality Shots in this build, this will be your main source of healing. Use it wisely and always look for medkits in the ground instead of using your own.

Choke Bomb: Since you are not going to have both Concertina and Poison trip mines in the early levels, instead, pick choke bombs. This also can clear poison clouds, so if a partner dies inside a poison area, you can clear it with Choke. I made a complete guide on how Choke Bombs are the best tool in the game. https://steamcommunity.com/sharedfiles/filedetails/?id=2454252528

Heavy Knife: This is useful in case you need to clear a concertina area after someone dies in it. 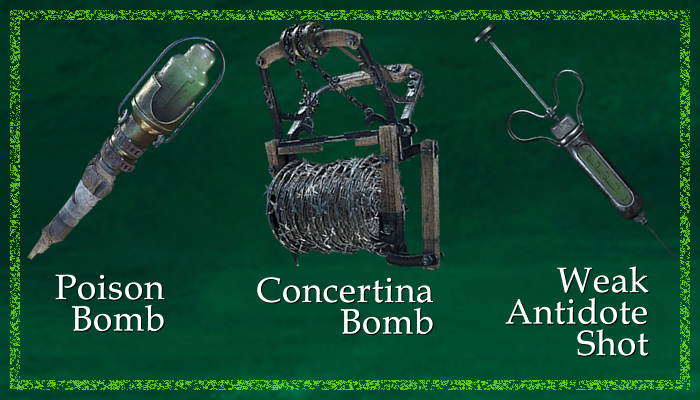 Poison Bomb: Pick two of this. Use it to close the access to a door. You can pop one in the top of a dead enemy, preventing someone trying to revive him.

Concertina Bomb: For the same use as the previous consumable, the only thing is the area of Concertina Bomb is bigger and also much more hard to clear it.

Weak Antidote Shot: This one longers 30 minutes, you don’t need to spend on a upgraded version, since 30 minutes is more than enough for a whole match. The reason you need this is so you can access the areas yourself blocked with poison. 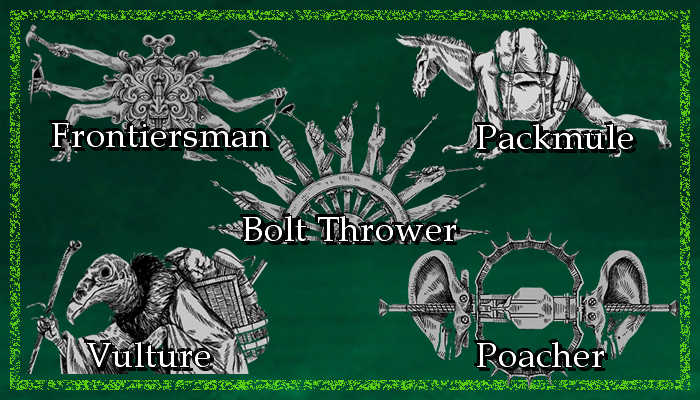 Packmule (level 1, 3 points): Restock your tools and consumables as double as possible. Very important and cheap.

Frontiersman (level 39, 8 points): Every tool can be used one more time. Very important, despite of it cost. This will make you place one more set of traps and also have one more medkit.

Poacher (level 59, 2 points): Very useful if you need to place traps while in combat, so your enemies will not notice it.

Since you will not have stamina shots, and the main objective of this build is reach the boss lair as fast as possible, traits that gives stamina and movement bonuses are very good, like: Greyhound, Determination and Gator Legs.

You will not carry Vitality Shots, for this reason some trais will help you heal easier: Ghoul and Doctor.

Mithridatist can be useful if you don’t want to use Antidote Shots, but I don’t recommend it that much, its up to you. 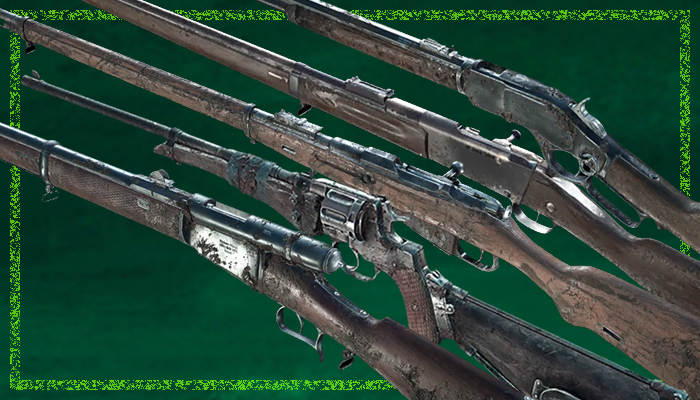 Your large slot gun, as I name in this build as “secondary” can be, mostly, which one you desire.

But take in mind that you don’t have a pistol, so all your “pvp capability” will come from it.

For example, if you stumble in a enemy team, you will not have much time to set any trap, so you need a good secondary gun.

Some guns that I strongly don’t recomend in this build: Melee ones (Bomb Lance, Saber), single shot ones (Sparks, Martini), any gun with scope, and shotguns (since you will not have fire power at medium distance).

*play safe and smart. If you find the boss lair faster, try to place traps around while your teamates kills it.

*save your crossbow ammo. Yes, you can kill almost every AI, but it’s necessary to have at least 5-6 bolts when you arrive at the boss lair.

*don’t go solo with Plague Doctor. This build is based on team play, of course you can try to do it solo but take in mind that this is not a easy build to manage and solo will be even harder.

*this build cost more than 400 Hunt Dollars. And can be even more depending on what secondary gun you chose. It’s a fair amount, but not so cheap one. So be careful and try to not wast it dying too easy.

*don’t rush, don’t push. You are not the front liner of your team, let your friends push the enemy team and sneak behind them trying to get some kills with poison or with your secondary gun. If your chances of survivability are low, like your both partners die and there’s 3 or more enemies on your way. Run. I know most of you will don’t agree with me, but believe me, Plague Doctor is not a fully PVP based build, and chances are high to you die instead of getting a clutch.

*warn your teamates about your traps. Specially if you are placing traps while your partners are killing the boss, warn them constantly about your traps. Use your pings, don’t write on chat or say it on ingame voice because closer enemies will notice it too.

First of all thanks for reading my guide.

I also want to know your thoughts on use of poison and traps on the bayou, do it in the commentaries bellow.

Despite that I have more than 1k hours in the game, I don’t know everything and the main purpose of this build is to have fun, and also do something different instead of playing the same builds over and over again.

Also I need to say that I’m not a native english speaker, and you may notice many mistakes. Sorry for it.

Thank you and see you in the bayou.

This is all about Hunt: Showdown – BEST Poison Build; I hope you enjoy reading the Guide! If you feel like we should add more information or we forget/mistake, please let us know via commenting below, and thanks! See you soon!