Did you know Minecraft banners is their own special game for some players?

You can use up to 6 (six) patterns on a banner, and use the patterns to manipulate them to make some interesting design!

Thanks to some clever players designers, in this guide we are going to show you how to make all the distinct patterns you can use on your own. Hope you gonna enjoy this ride 🙂

How to Craft All Banners Patterns in Minecraft including The Loom?

Before we show you all the crafting recipes, we will like to let you know about the most important thing to Banners Design: The Loom.

It’s a very useful and helpful tool to use when you design your banners.

If you craft the banners by hand, you need to use anywhere between 3 (three) and 8 (eight) dyes ingredients.

The Loom makes it so no matter what you gonna use, you only be needed to use one Dye Ingredient!

In the image below, we will show you how to use The Loom to make any design. 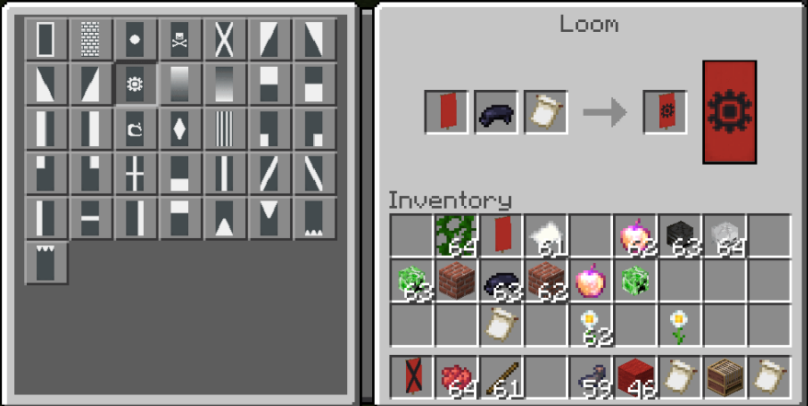 How to Craft All Banner Patterns in Minecraft 1 – steamlists.com

For some designs, you will need to make a Banner Pattern by crafting/combining specific ingredients with a single piece of paper. You can see the recipes for each Banner Pattern in the image below.

If you don’t want to use Loom and instead craft the banners manually, don’t worry we got you covered on how to do it!

In the list below we gonna show you which patterns are available to be crafted and how to craft them!

In the image below we gonna show you each pattern for the banners list:

The following banners patterns are shown in the image below

In the following images below will be banners patterns for:

In the following images below will be banners patterns for:

This is the list for banner patterns, hope this list helped you to craft your own banners in Minecraft.

If you believe we forget to add something to the list, please let us know via comment, and we will update how fast is possible.