Have you ever wanted to be able to see where the enemies were in that hold point before running in & getting shot to pieces? Have you ever wanted to stealthily & safely take down some sosigs from the comfort of solid cover? Then you can use the Spectator Panel to see around cover & even accurately ‘blind’ fire!

Optionally, a laser sight for a much easier time ‘blind’ firing from behind cover, & a suppressor so enemies won’t even know where they’re being shot from.

To do this, you spawn the Spectator Panel with your wrist menu. From there, you spawn the RailCam attachment, set the Desktop Camera Mode to Spawned Object, enable the Cam Preview, attach the RailCam to the top of a gun & turn the RailCam on by grabbing it & pressing whatever button it is that turns on laser pointers for your controller. If you have a Quickbelt that has large hip pockets, I recommend putting the Spectator Panel in the left one of those, as it keeps your hands free & it conveniently puts the preview window in an easy to look at spot. 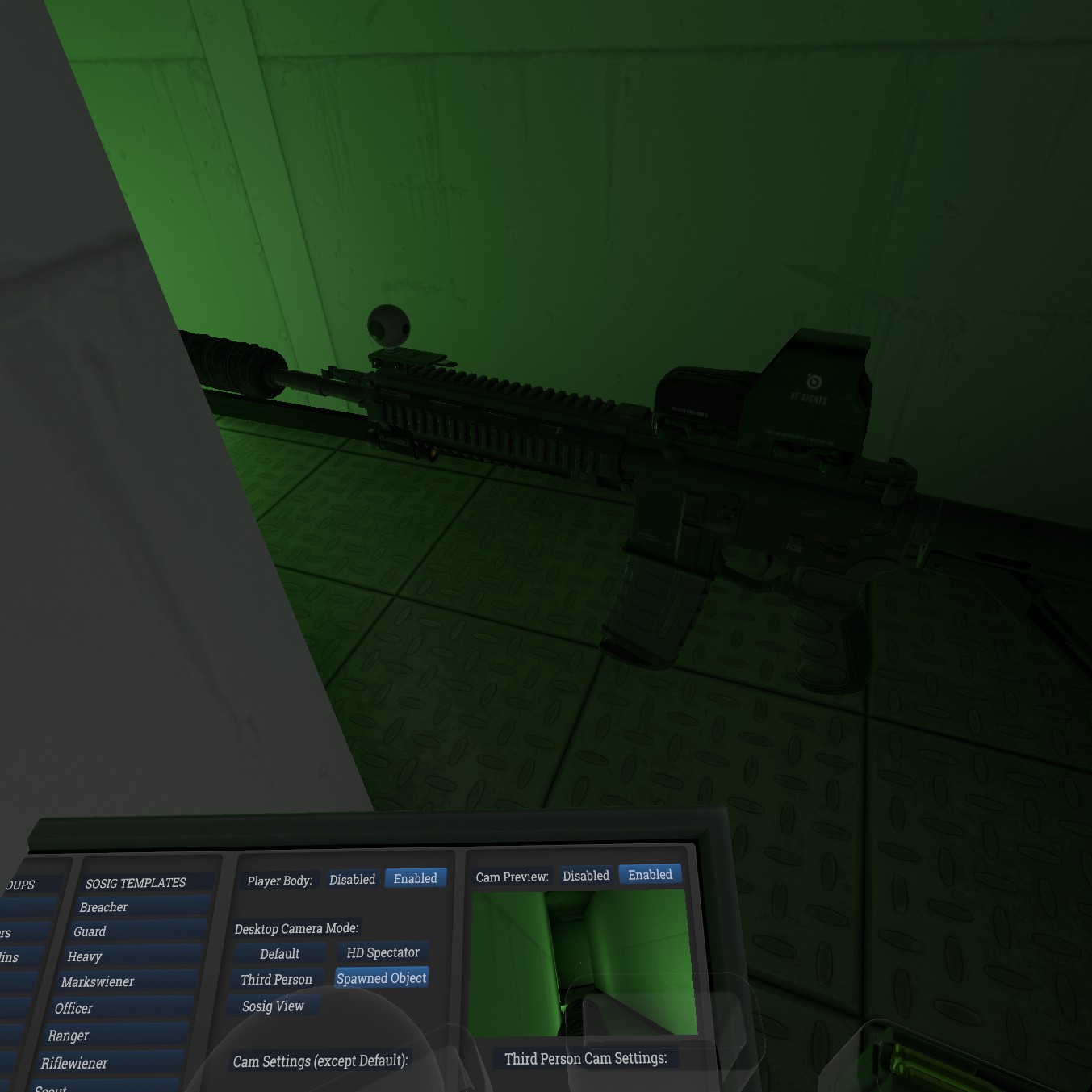 You can then adjust settings like the Camera FOV to zoom in or out. There are options to smooth the camera view which looks very nice, but make it a bit less accurate to shoot with if that’s what you’re going for. I recommend putting the camera only on the top rails of guns, as using the side or bottom rails will make the camera feed upside down or sideways, which makes it much more confusing to use. 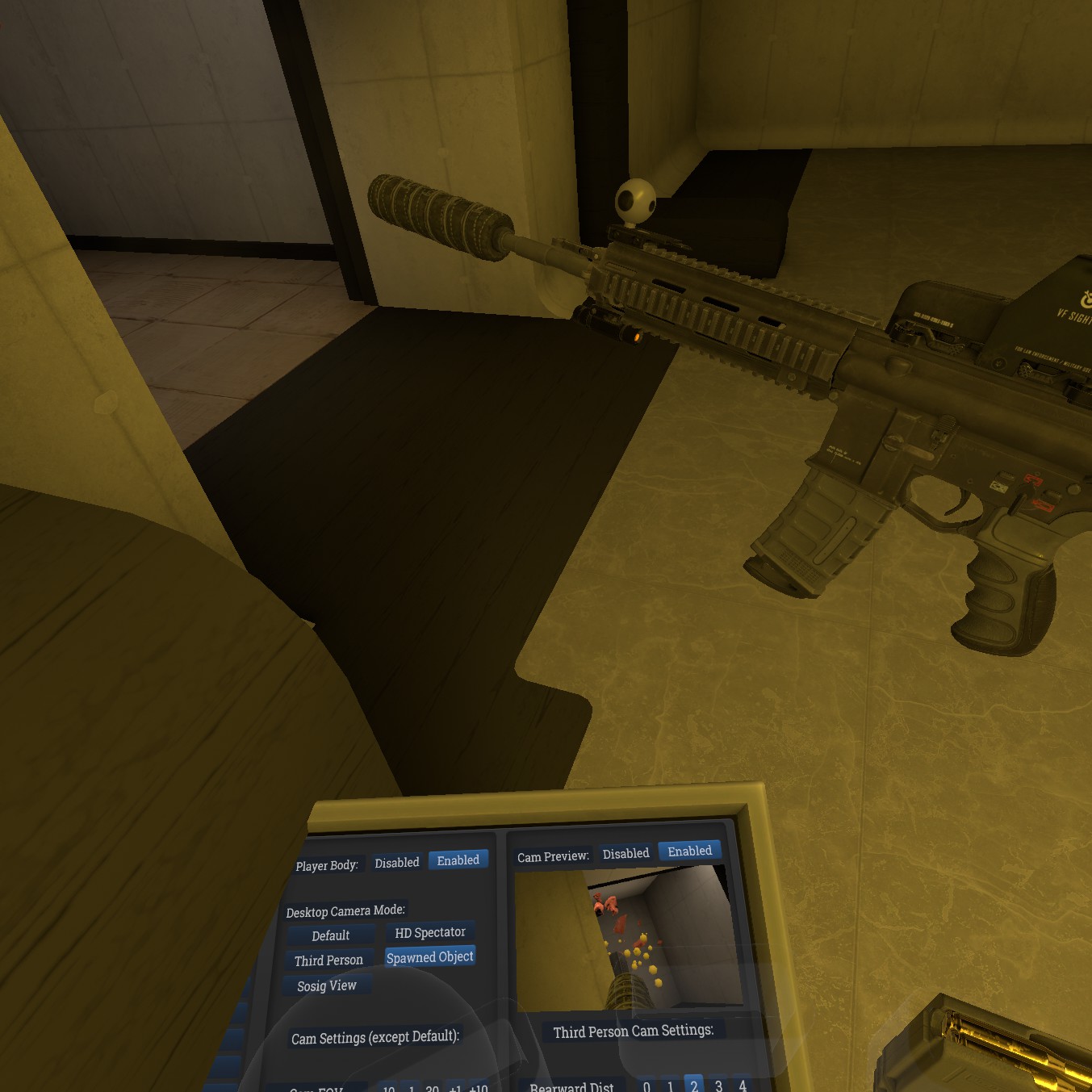 With this, you can accurately take down sosigs from behind cover. With a laser pointer, you’ll be able to take very accurate shots & with a suppressor the sosigs won’t know what hit them. 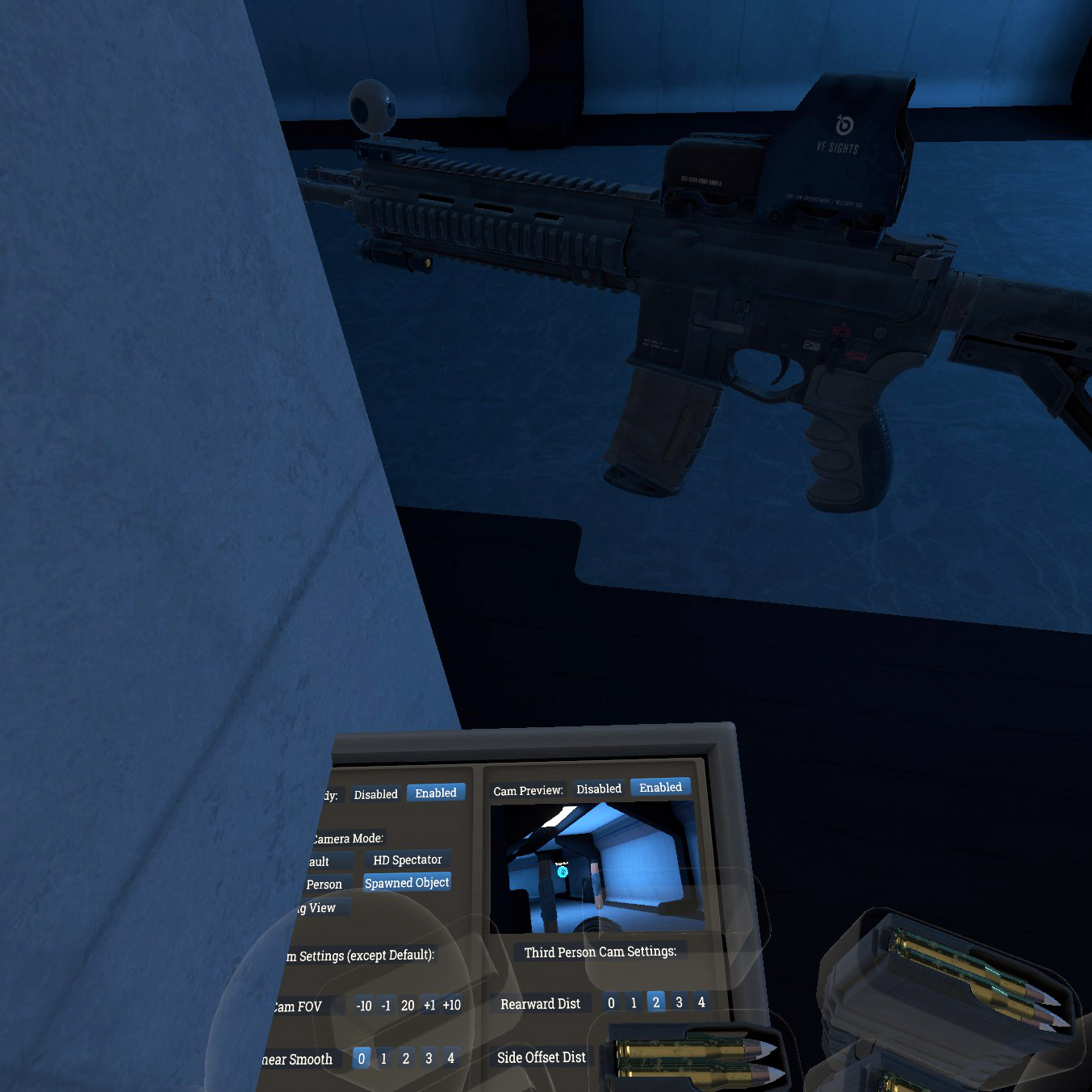 Now for negatives, you’ll be looking down at the panel a lot & you’ll be stretching your arm to see around those corners. Obviously playing like this is much slower than being an actual tactical badazz, but it is much safer if you find you don’t have the reaction time to fight toe to toe with them. You’ll likely be using up one of your larger Quickbelt slots for the panel, since holding it with your free hand is very clunky. The camera does get in the way of aiming, but you can still aim like normal if your holo-sight is tall enough or you have risers, canted sights or laser sights. *Edit* -I am dumb and you can probably put the webcam *behind* a holosight for accuracy, instead of having to use a laser sight, duh. It’d still get in the way of aiming normally though.

Since you can set this up with anything that has a pic rail for free, you don’t have to do this with guns if you just want to be more prepared before you expose yourself (There’s a standalone handheld camera as well as the small webcam one). It just might not be worth the ha*sle of setting up the panel & camera every run.

Why would anyone do this? 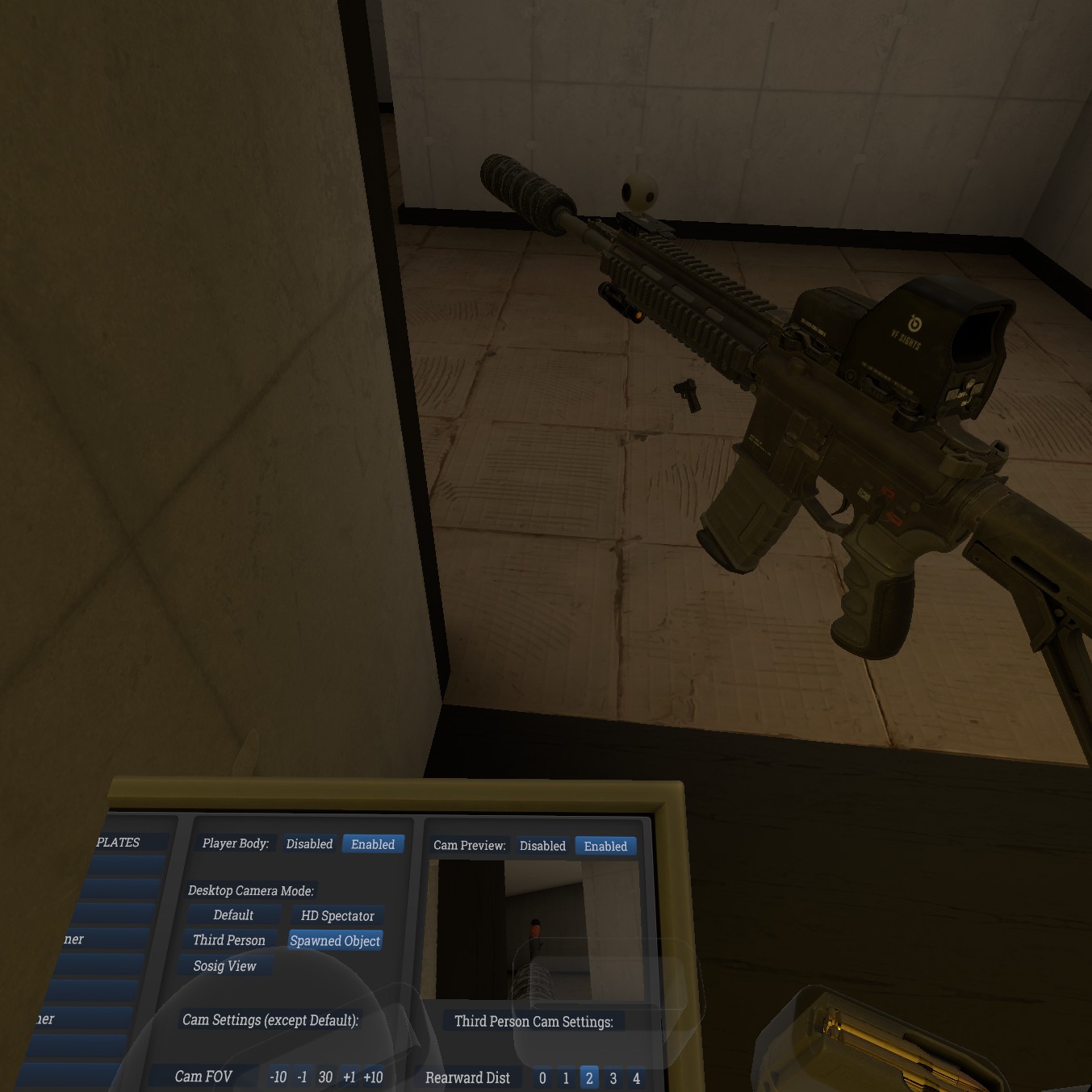 I love utilizing a games mechanics in weird & interesting ways & I thought it’d be worth sharing this usage of said mechanics for anyone that might be interested in trying it. It’s certainly not worth using all the time, even if it can be kinda OP when you can just headshot every enemy while basically being completely invisible to them. It’s a small ha*sle to set up every run & It’s still way faster to just use the plentiful sound cues the sosigs make to pin point their location, or even just use the wrist radar if you have that turned on. But in a game full of wild & wacky things, why not try out a goofy way of clearing holds & point shops? Or even if you don’t want to use it in the way I’ve pictured it with my screenshots, why not try leaving a camera pointed in the opposite direction so no sosigs can ever flank you?

This game is awesome, & I love that a feature that was added mainly for streaming/content creation is flexible enough to be used to change how you play. Thank you Anton for $20 well spent!

This is all about Hot Dogs Horseshoes & Hand Grenades – How to look/shoot around corners in Take & Hold with the Spectator Panel; I hope you enjoy reading the Guide! If you feel like we should add more information or we forget/mistake, please let us know via commenting below, and thanks! See you soon!