Are you having trouble making your mark with one of the various hyper ranged weapons of Hitman: Contracts? Do you wish to understand the mechanics of said weapons to use them to their fullest potential? This is the guide for you!

To use a sniper rifle, you must first understand what defines a sniper rifle. A sniper rifle is a long ranged weapon with a scope and often one single shot will vaporize anything in the crosshairs. All sniper rifles found in Hitman: Contracts are not concealable in any capacity, and often are found only in certain levels like Traditions of the Trade and Slaying A Dragon. 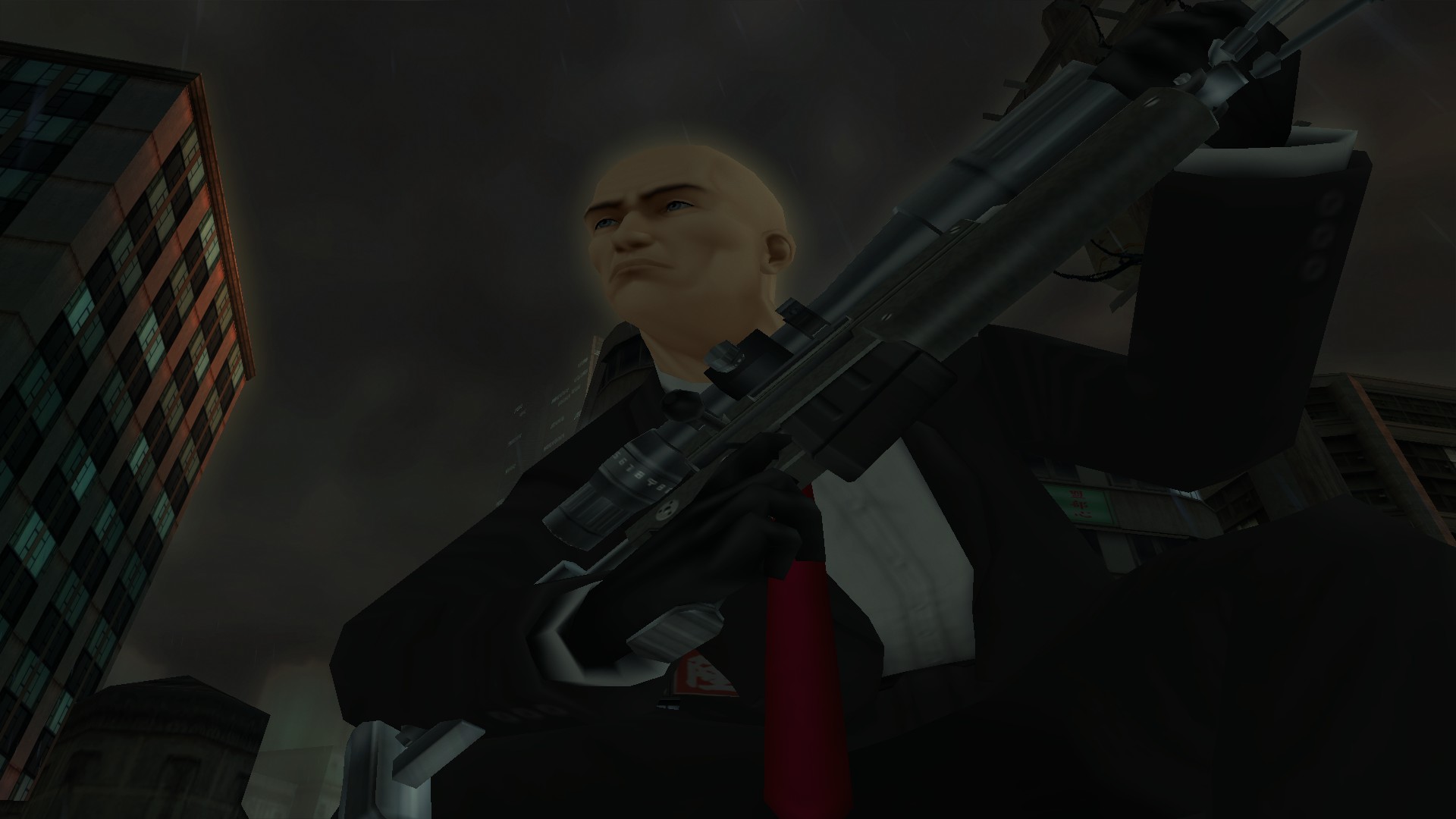 This may seem pointless to include, but understanding your rifle can make a world of difference. This is one of the most important factors of using a sniper rifle. Each one is found in a different way and has different DPS and a different shooting mechanism, and it is important to understand how each one feels and fires and to know which one is best for the job at hand. For example, if you need to snipe multiple people at a given moment, it isn’t a great idea to do that with a bolt action rifle, but a semi-automatic will work fine. I will now explain each rifle and their characteristics.

It is also important to note that ALL rifles can be spawned with inside a Sniper Case and fit perfectly fine, however, the level must spawn the player with one in their inventory by default or this feature is ignored. Something that must be taken into account is that during the mission, these rifles CANNOT be swapped out in the case. For example, if you spawn with a WA2000 sniper rifle in the case, you cannot put a Dragunov sniper rifle into the case, but all WA2000 rifles that are found in the level can be placed into it and vice versa. 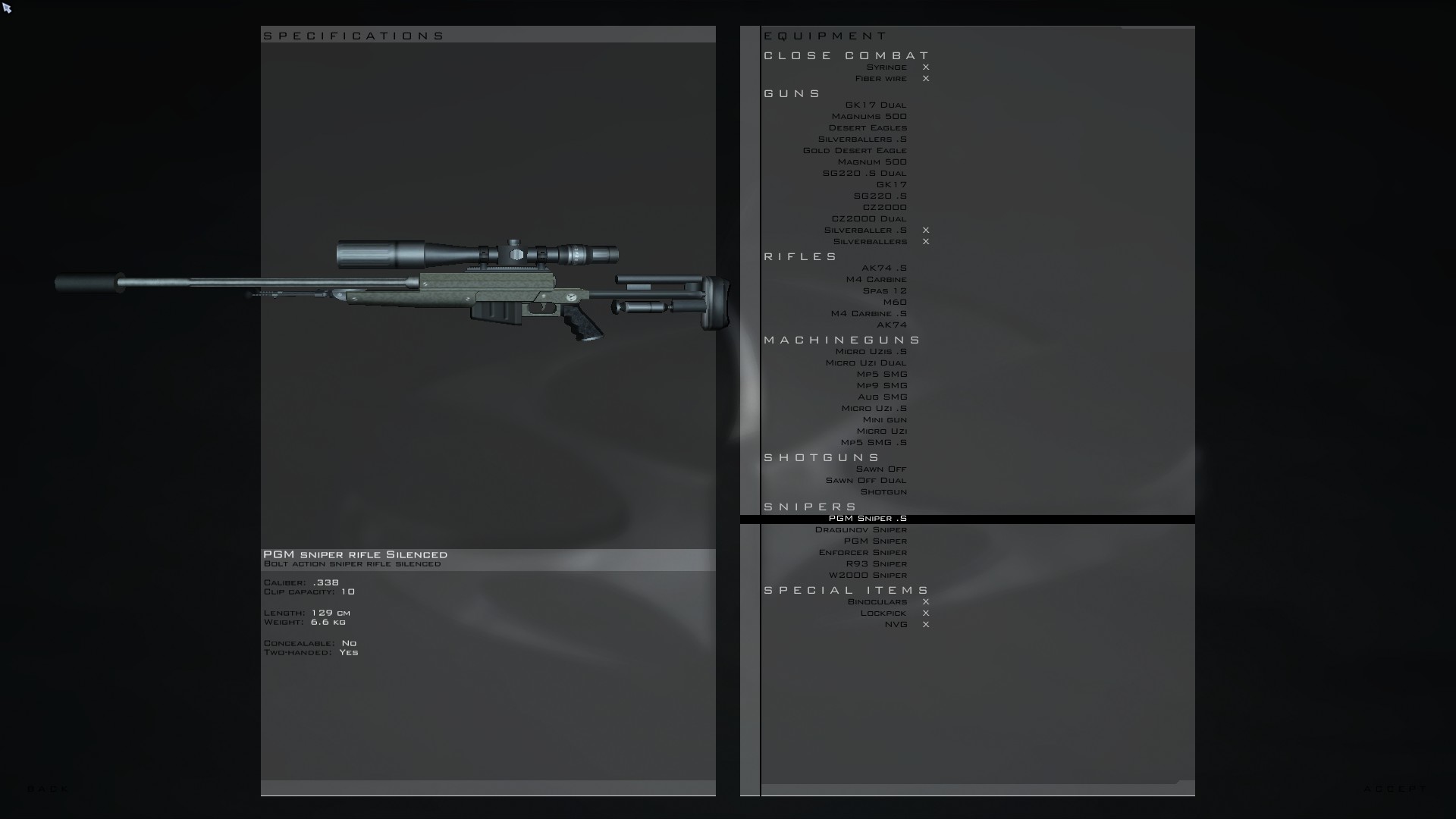 This is my personal favorite rifle of Hitman: Contracts, earned from completing Hunter and Hunted with a Silent Assassin rating. It is a bolt action rifle with extreme range, a silencer, is generally the most stable, and is all around an awesome choice. 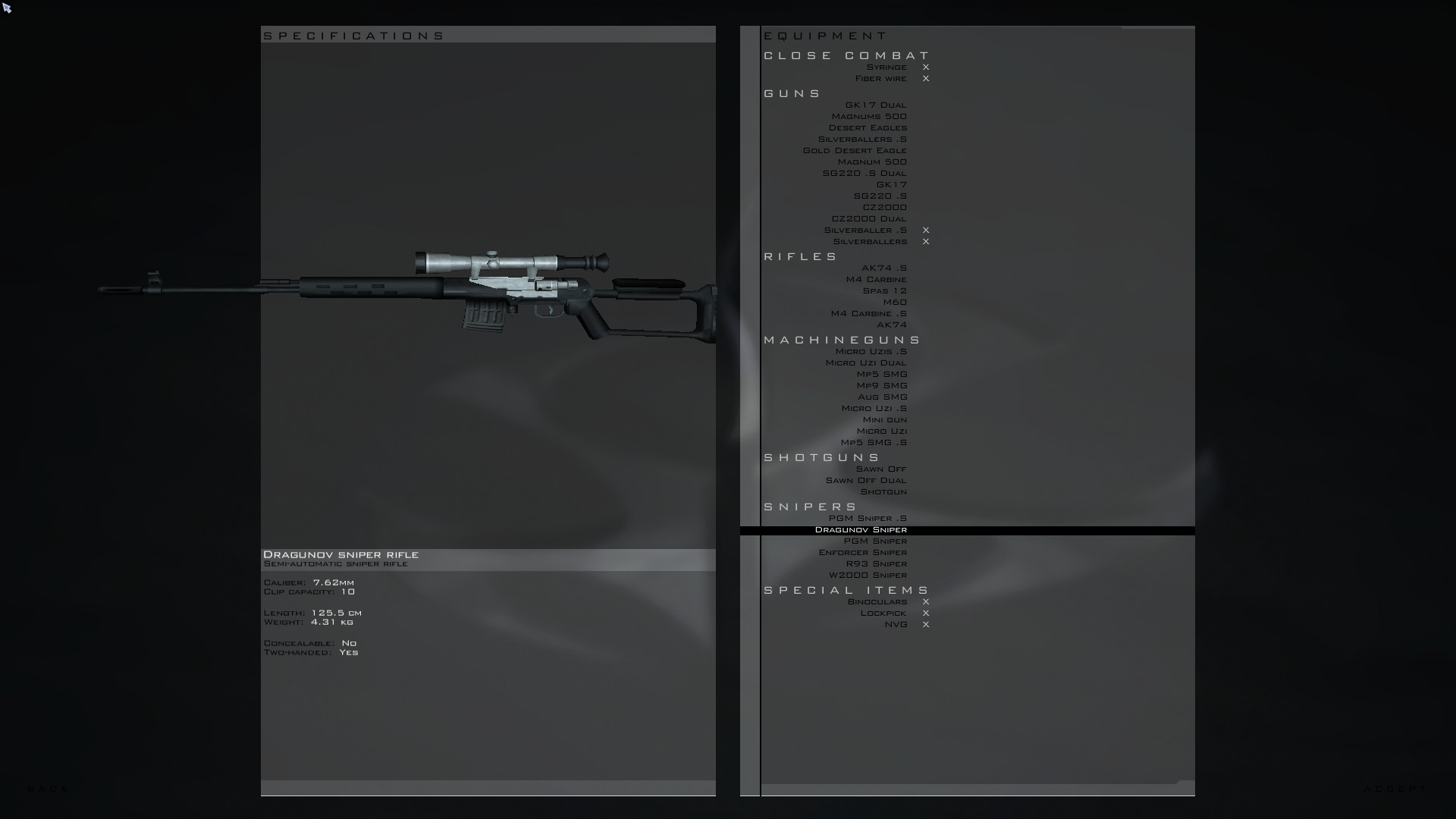 Look, I’m not going to lie to you all, I hate this rifle. It’s nice at medium range, as long as you don’t have to be super accurate with your shot and are firing at a big target. It’s found in a few levels including Asylum Aftermath and Meat King’s Party, and it’s a pretty good early game rifle if you’re going for more of a run-and-gun approach. Outside of that, I personally wouldn’t recommend it unless you’re going for 100% completion (all Silent Assassin ranks and collecting all guns in one save). 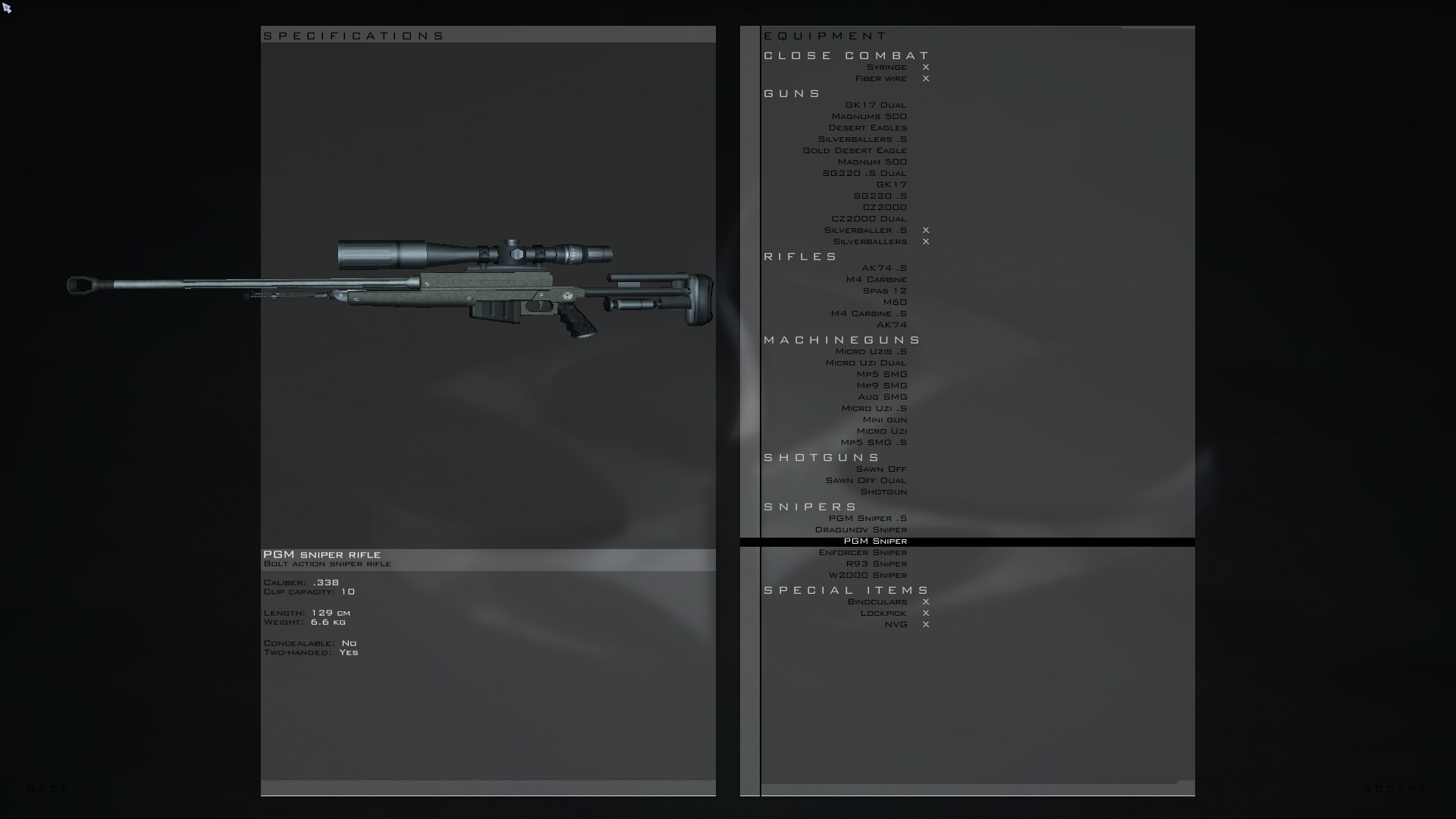 Basically a carbon copy of the PGM Sniper S. variant, this version is easier to find in the world (depending on your definition of common of course since the only times you’ll find it are in the hands of snipers with heavily armed guards surrounding them) and lacks a silencer. Is this a problem? Not particularly, but it could mean the difference between success and failure as you all know with weapons like the Silverballer and Silverballer S. Of course, I would assume, as with the other weapons that have a silenced and unsilenced variant it follows the trend of having more firepower when unsilenced, but I’m not entirely sure how useful that REALLY would be since, you know, the S. variant is basically a one hit kill at any distance when hit anywhere on the body. 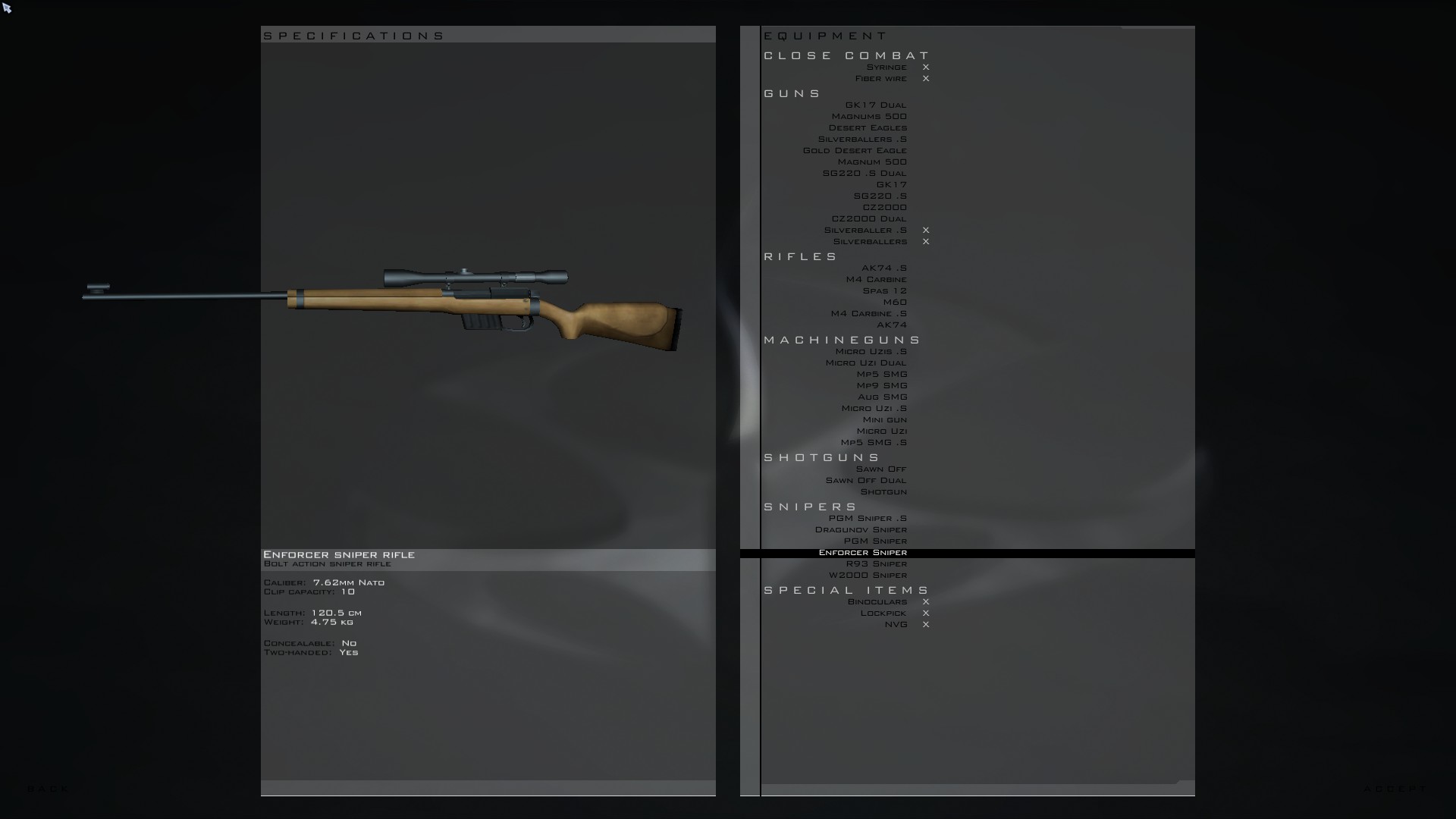 Another one I don’t particularly like. It is found in a few levels like Asylum Aftermath and Beldingford Manor. It’s a pretty basic rifle, nothing really standing out quite as much as the others. I use it so rarely compared to the others that I had to test it specifically for this guide just to get an idea of what kind of rifle it was again, it’s that kind of rifle. Also on some levels, for some reason, this particular rifle’s scope has a weird issue with the crosshairs getting drawn over by the world geometry (at least on my Nvidia GTX 1070 graphics card with maxed out quality settings). 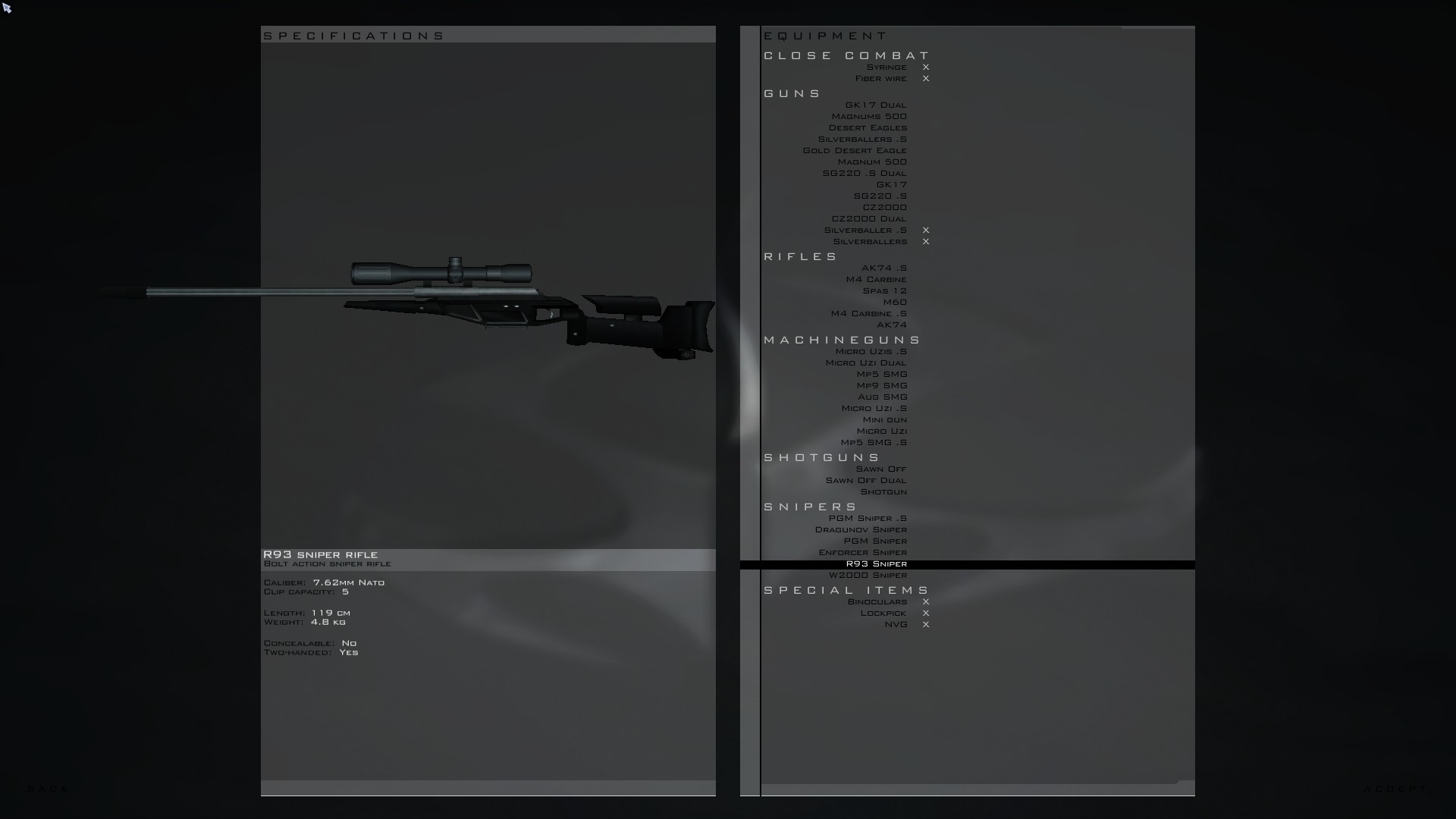 Another one that I rarely use, honestly. In fact, I don’t remember ever actually using it. It’s not very powerful, it doesn’t have the greatest scope, and it doesn’t have very many bullets per clip. It DOES however have a built-in silencer. 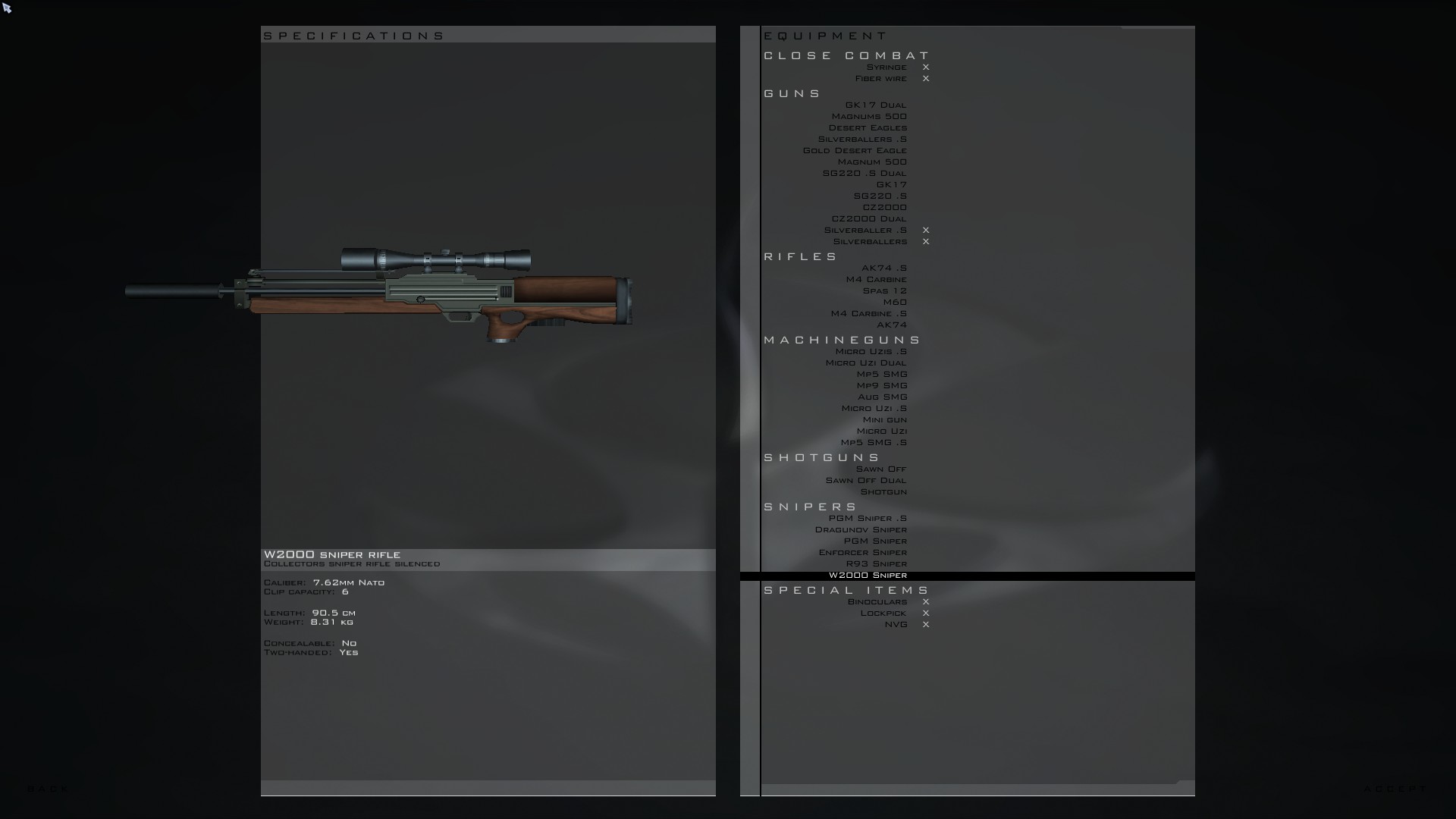 This rifle needs no introduction, it is one of the most symbolic and well known sniper rifles in the world and is synonymous with the Hitman series and no doubt has been in the hands of every player at least one time. It’s one of the lower tier rifles on the list, but it definitely does pack a punch.

How To Effectively Use Sniper Rifles

This may be self explanatory, but the game’s sniper rifles are generally weird to some people (which is actually the reason I wrote this entire guide). So the mechanics aren’t very simple nor well made nor are they well explained, so I shall explain them to the best of my ability.

This is easily the hardest part of using the sniper rifle class of weapons in Hitman: Contracts and is hated among the community somewhat. Why? Because honestly, the stability system is awful.

This is another big issue with the sniper rifle class that takes trial and error really. Remaining undetected really isn’t hard, it just requires finesse.

This section really has nothing to help you other than me wanting to personally thank you all for reading the guide as it took a few hours to make and I did spend a bit of effort on it. If you read the entire thing, I am glad and hope it helped you! 🙂

Hope you enjoy the Guide about Hitman: Contracts – Pegasis-Vera’s Ultimate Sniper Guide, if you think we should add extra information or forget something, please let us know via comment below, and we will do our best to fix or update as soon as possible!