What are hands!? How do I use them?

Also, to find the achievement that you are missing in this guide, press Ctrl+F and enter the name of the achievement in English. English Language you can find in Main Menu on the top left corner of the main menu. You’re welcome.

No Time to Waste

I can do this alone

and the achievement of the faction you play… like Order

Please look very closely on your settings, or you won’t get those achievements with one click, okay? Here is Screenshot 1: 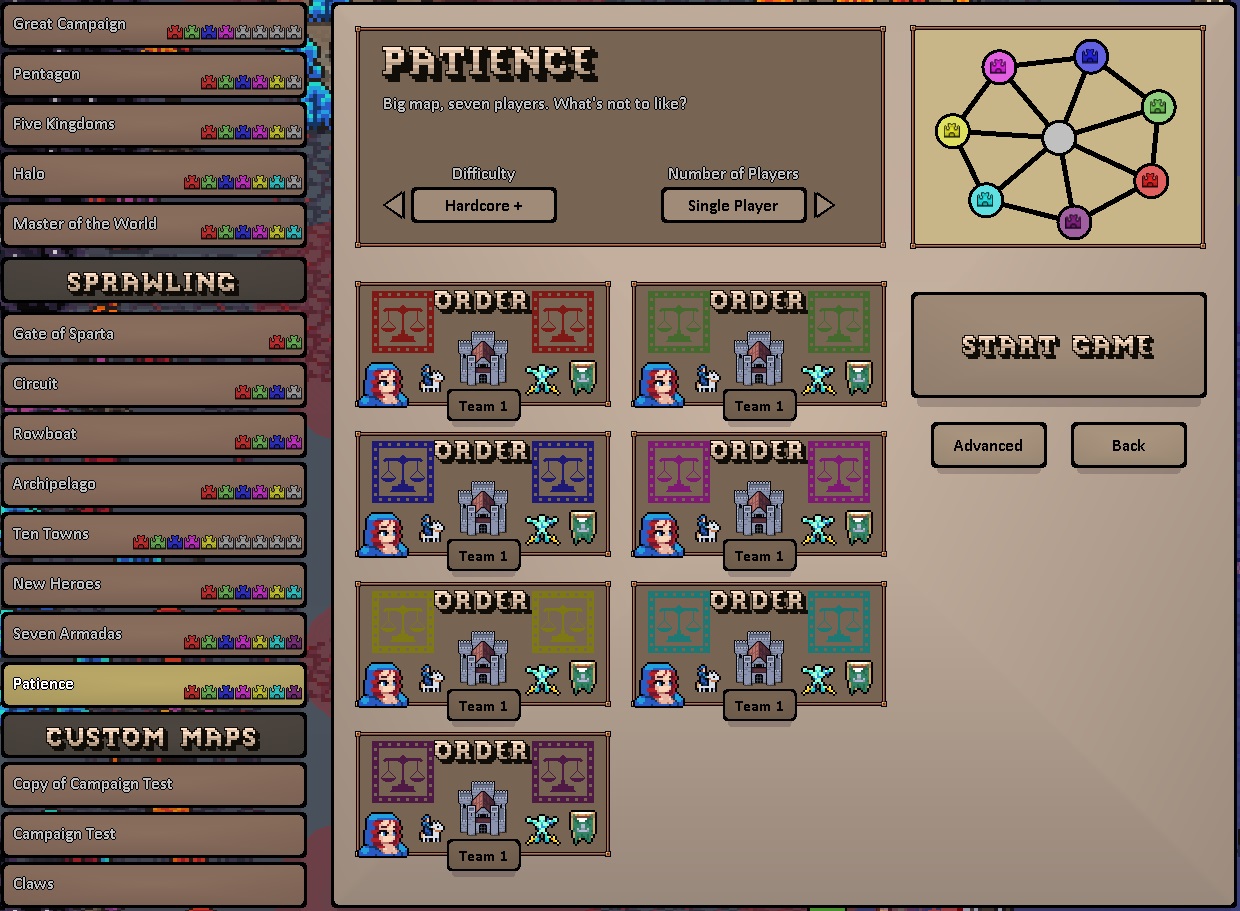 And here is Screenshot 2: 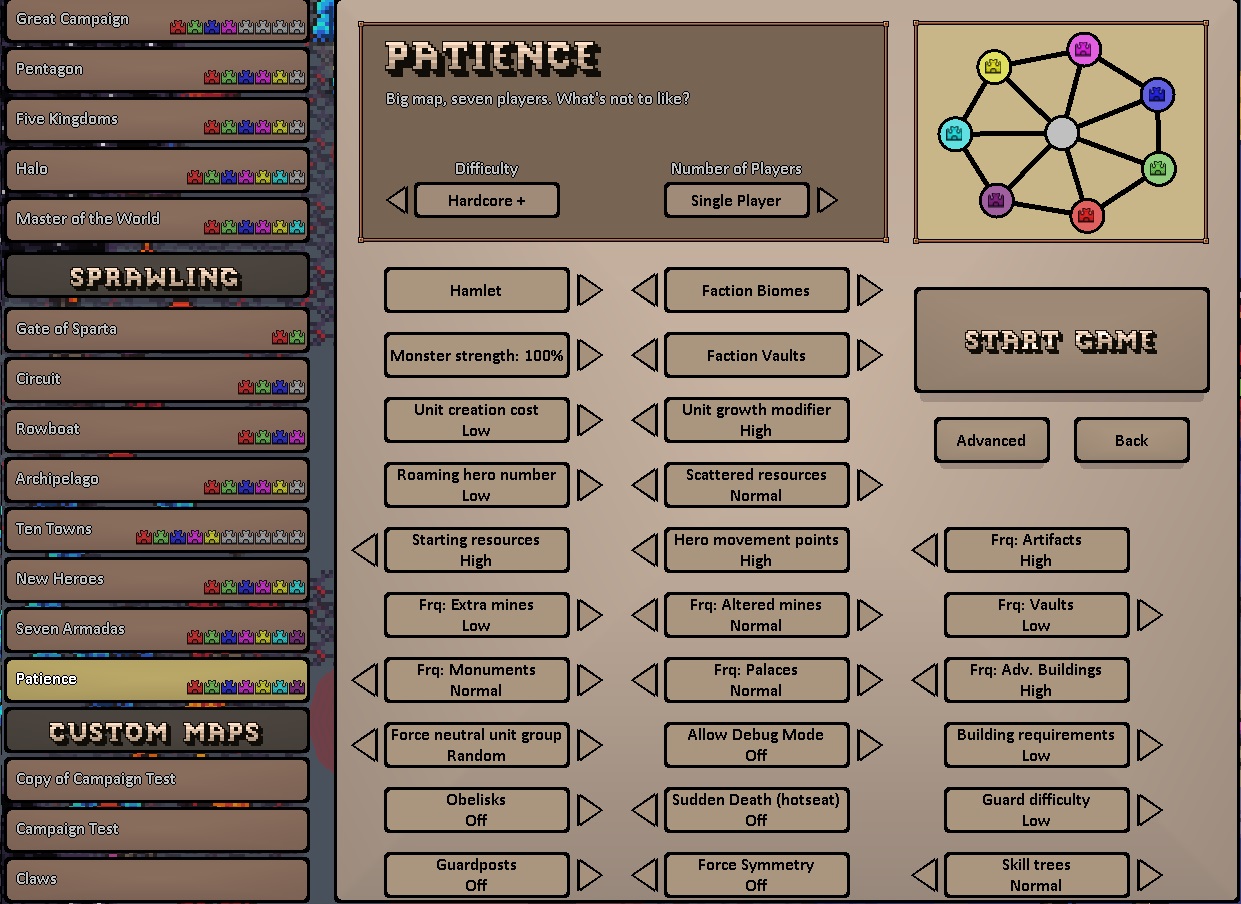 Gongrantulations, you successfully achieved 15 Achievements with one click. Get your trophy by pressing “Continue Playing”, because due to the settings of the last section, you let the AI play the game for you now. But first I want you to understand 6 Achievements.

As soon as you find a Forlorn Cloister, just send your hero there and sacrifice him. You will eventually find one, while you let the AI encounter them for you.

I took 20 hours of my playtime to try to get all artifacts in a legimitate way, but that is just a big waste of time. You only need an Armorsmith and/or a Black Market Adventure Building. You will want to encounter at least one of them in all of your runs – including this one – because these achievement can be obtained, by purchasing at those adventure buildings.

So technically you move your hero next to one of those buildings and press “Next Turn” until a new week starts and you buy artifacts. With a bit of luck, you are able to get those 6 achievements in the same run, by letting the AI do the work for you. If not: Use the same strategy in the next runs.

Also always have Artifact Spawn Rate “high” the more you find the sooner you get this achievement.

Alternatively, you can collect them, but that may take more time.

Use same start conditions as before, Adventurer should be collected on the way. If you already have those, just directly get out of those games. We are just here for these achievements, of course.

As you might have guessed, this game ain’t that easy to platinize, so it is time to get yourself a nice drink, maybe a snack and enter a very, very long game, because we have A LOT of Achievements to obtain in this run.

VERY IMPORTANT, THESE ARE THE STARTING CONDITIONS (I probably tell you “why” if it’s getting to the achievement…) 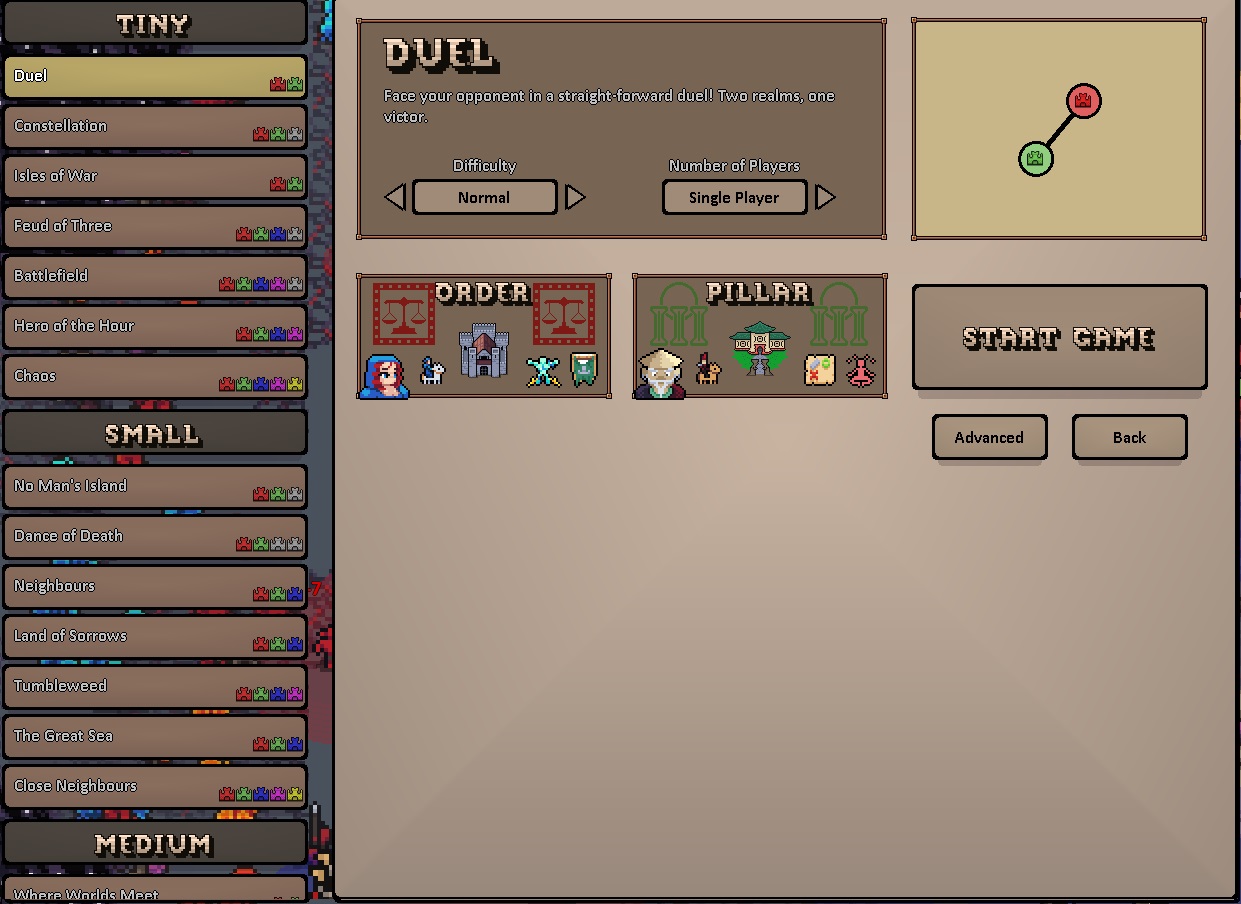 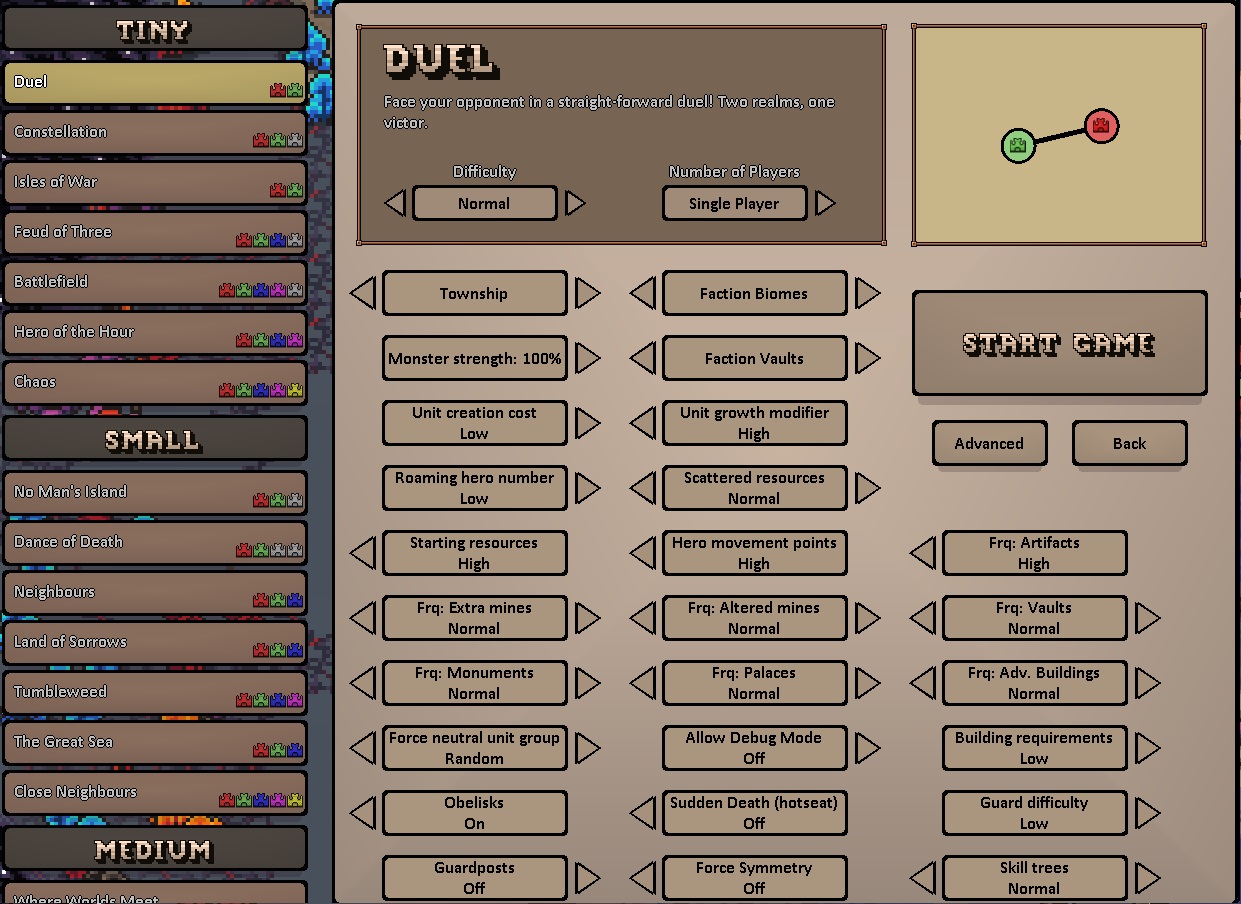 I’d like you, to ignore obelisks and first completely concentrate on the following 2 achievements.

Flawless “Win a battle without taking casualties” actually means: “Win a fight against an army of a different color, without loosing a unit of your actual, real units”

This is, how your hero should look like, when he is finished with the run: 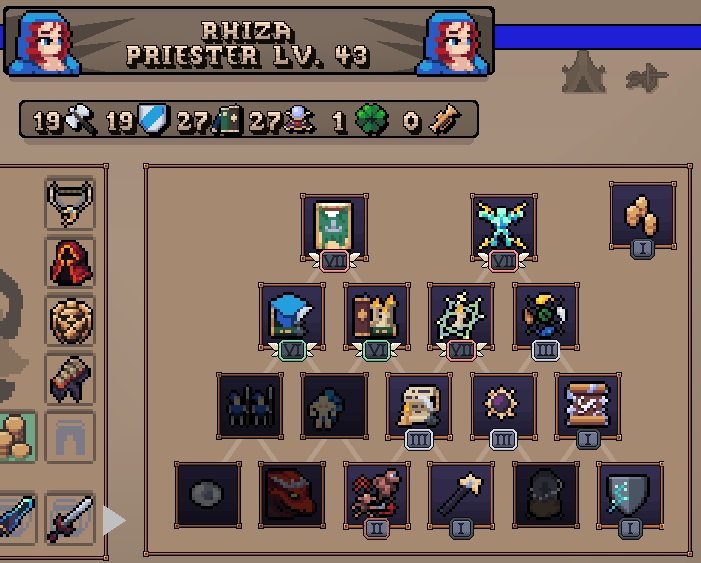 I told you to take Rhiza. She can summon Elementals and she can learn how to cast Summoning Spells. When such an elemental dies, it does not count as a casualty. Find a good tactic to beat the Pillarhero, when he has a near impossible army and then load the game and take him out again without taking any casualties. Some people reported, that this was so easy, that they took both achievements in one battle. I’m not one of them, maybe you are, maybe not, what do I care. Use your 5% Brain here and after you are done, go to the next achievements, there is a lot to do.

You can now visit an obelisk, therefore gaining the first clue of the treasure location. You are not allowed to take any other clues. Figure out where it is and roam the area. Unlike HoMM3, when you are close to the location, the shovel is getting useable. Once useable, simply dig and get the achievement.

Archmage “Learn an adventure map spell at an Archmage Tribunal”

If you haven’t already, just finish your town and send your hero there to get both Achievements. Also, please just create an idol…

Emperor “Have a hero reach level 30”

Magus of Magi “Encounter 95% of all spells”

This one will most likely be the most annoying one. You have to encounter random battles over and over again, until you reach level 30. When you look at the Perks of Rhazi, I highly suggest to you, to learn Wisdom and Learning as fast as possible, because Learning is fastening up the process of leveling and you will learn up to 2 new spells with Wisdom per Level Up, getting you closer to the Magus of Magi Achievement. But I will come back to that later.

This one, you will get along the way.

If you’ve got here, because you did not unlock it, although it technically should, I know what you mean! I’ve saved more than 500 units what seemed to me like a “single game”, but appareantly I unlocked the achievement, when I saved 500 Creatures In a single fight! I’ve got myself 2000 Units of Disciples of the Pillar Faction, set the Battletactic on “Defend” and let the enemy archers kill somewhat around 1500 Disciples, just to be safe and defeated him with the last 500 units. Then I got the achievement.

Bestiary “Encounter 95% of all rare creatures”

It says “Rare Creatures”, which are all creatures that do not belong to a faction. And you can summon them (also getting Greed is Good on the way, if you haven’t already got them).

Here are 7 steps on how you get this achievement.

6. Enter the name of the Rare Creature, you haven’t encountered yet in the guides search bar

7. Follow the guides instructions on how to create the missing Rare Creature

All Grown Up “Bloodwarp a Hatchling into a Seraph”

Now that you’ve got a Pillar town full of Rare Creatures, take the Hatchlings into your Main Army and get into battle. It takes a few battles in my experience, but you will be able to Bloodwarp one of those Hatchlings into a Seraph.

Dragonspeaker “Acquire a Dragon via Diplomacy”

We are now getting to the point, where you will hire other heroes. Before we go all bonkers on them, try to hire a hero with Diplomacy and send him into battle against any neutral army that contains dragons. You will eventually be able to acquire one of them via diplomacy.

Magus of Magi “Encounter 95% of all spells”

Make a savestate and then go completely BONKERS on Hero Rectruitment. By now you should have learned any possible spell, that is not Faction related. The heroes you will hire, will provide every missing Factionspell. You will eventually unlock the achievement, after your left mousebutton is taking fire.

That means: “Get a hero of a faction you did not start with from your tavern, let this hero be the only hero next to your town, enter said town and you will have an option on the top part of the screen to convert this town to the hero’s faction”

You will need the heroes of the following factions: Wild, Pyre, Lament

The Diamond Mine does not add to the achievement!

Start a game as Wild or convert a town to Wild and change your mines to Overgrown Mines.

Hordes of Hell “Recruit 666 Pyre units in one game”

I would had told you to summon them in the Pillar of Essence, but I bet that you legimatly need to “recruit” them, so better save than sorry: Start a game as Pyre or convert a town to Pyre and recruit 666 Pyre Units.

Start a game as Lament or convert a town to lament and ransack the whole ♥♥♥♥ of units you created in Pillar of Essence into the town. You will get the achievement eventually…

You specifically need a hero with Shadowcasting of the Lamentfaction. The Monolith gives you +1 Spellpower per cast per week. So you wait until the start of a new week, you get the whole ♥♥♥♥ of units, you just put into the slave pens back to your hero, enter the next few fights and put your armies on defend, while you cast 4-5 magic spells, until you eventually have more than 50 Spellpower to spare and cast Shadowcasting.

Man Made God “Have a hero with a sum of attack, defence, knowledge and spellpower above 100”

Item Stats do not add up to the achievement!

Since you’ve created a lot of Rare Creatures in the Pillar of Essence, take a black dragon and give it to a hero, that you have to recruit, that has Devour. Let him devour the Black Dragon and any other High Level Unit, to gain stats that ARE LITERALLY PERMANENT. If you proceed with this, you will end up with a hero that has a sum of all stat above 100 eventually.

Told you, ain’t that easy. But I hope this made it easier for you. It sure did for me.

Actually means: “Defeat a challenging (or more difficult) army of a different color having only Elementals in your army roster.”

How to get it easily:

Start with the Pillar Hero: Raliniten/Teranilo

And fight against the Decay Hero: Fearcap/Blankeyes 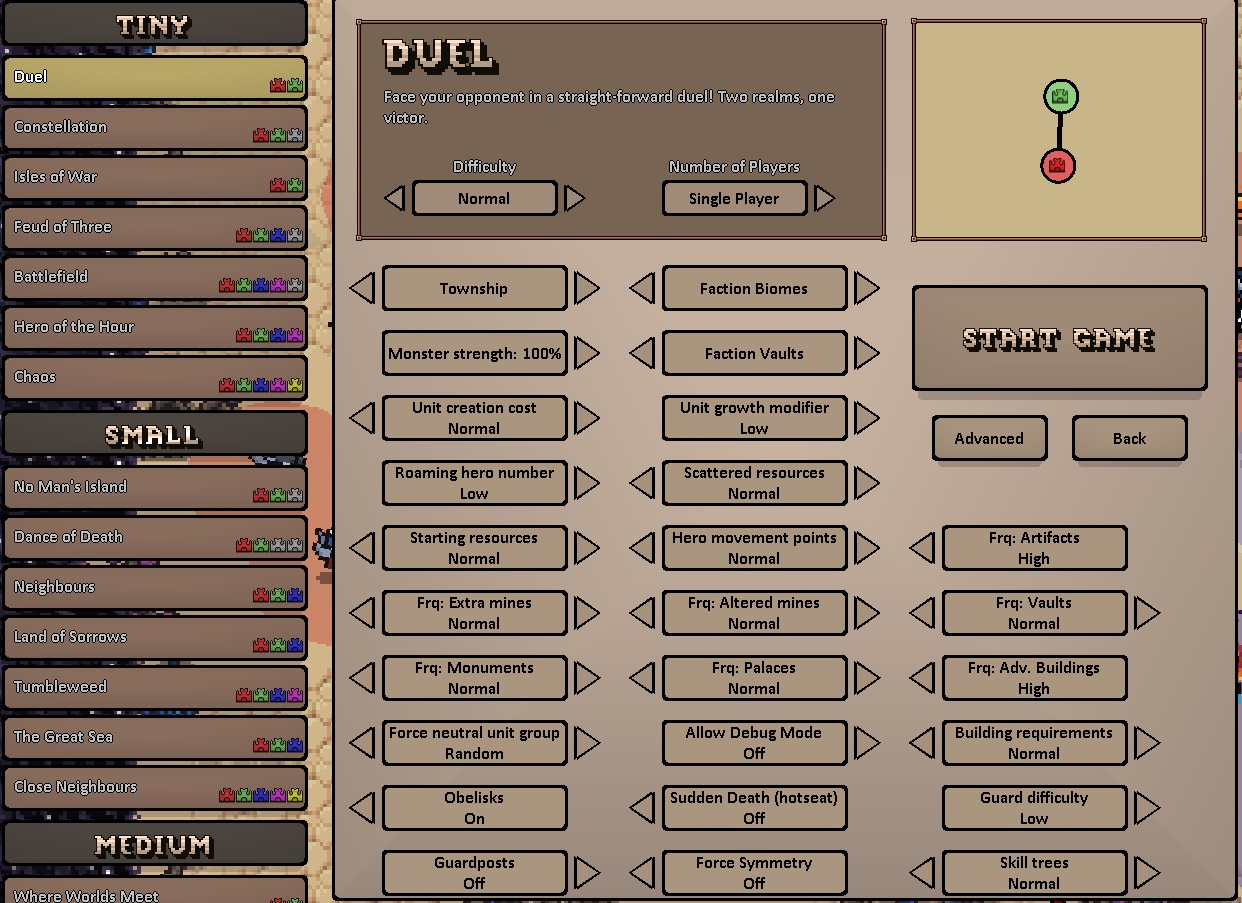 You want to summon Spirited Fire in the Pillar of Essences. (go to “Bestiary” Section of this guide.)

You want to get the Wood Mine as fast as possible and put a Tent in front of it. Unit Growth Modifier is low, so your enemy cannot ramp up units, but you can, because Summoning Units at the Pillar of Essence does not get affected by Unit growth modifier.

Get Oligarchy as fast as possible.

Enter a challenging fight against Decayhero. His creeps are low maximum health but they are on masses.

But since Flying Units are completely overpowered the Spirited Fires deal with them easily.

Once achievement obtained, abandon this godforsaken run immediatly and get straight to the next one:

This is how you obtain the last 2 Achievements:

Actually means: “Enter Combat against an army of a different color with a hero that uses the Rune of Death.”

Actually means: “Enter combat against an army of a different color. The enemy armys power has to have at least 2000 power.”

Your enemy is whatever… 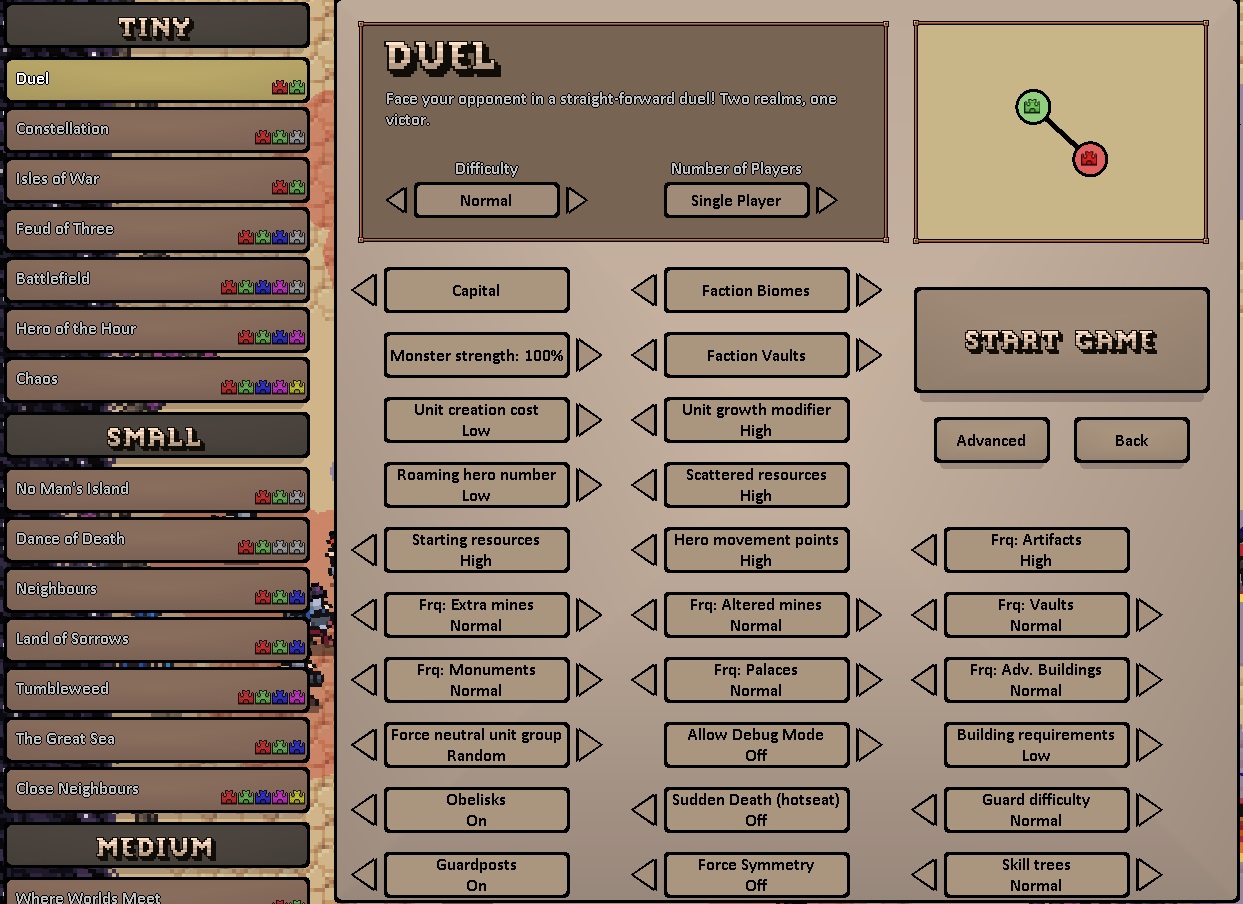 Clear your side of the duellmap and station your hero at the Guardpost, so the enemy hero cannot pass through. Equip your hero with the Rune of Death, the one that summons skeletons, when your units die.

The modifiers are completely in favor of unit mass production. Send as many units as possible to the Guardpost and stack them on your main hero. Somewhere around Week 9, you can send your hero to the main forces of the enemy and simply enter combat to obtain both achievements.

If you haven’t gotten Showdown, reload your game and wait for another week. You will unlock it eventually.

3 Achievements in a Skirmish

I do really not care, to share a full guide on how to do all skirmishes. There is only 1 thing to know of this game: FLYING UNITS ARE OVERPOWERED

You can beat 95% of all Skirmishes that have flying units by completely stacking a pile of them.

So here are 3 videos, don’t hurt your hands, mine still itches from The Black Death…:

That’s it, there is no more to it. If I am mistaken on one of the achievements, let me know. I will update the guide, eventually, … most likely, … probably.

If you want to use any of this guides contents, please credit me, thanks.

I hope you enjoy the Guide we share about Hero’s Hour – Achievements Unlocked; if you think we forget to add or we should add more information, please let us know via commenting below! See you soon!