A basic guide of playing an engineer class, how to build nodes and how to best support your team.

Do you feel compulsive need to be loved and cherished? Do you pick your classes based on your need to feel useful, to feel validated? Or you just want to rack up insane ammount of support points making you probably the best player of the game?


Apart from medic, engineer is your best option. Every commander loves his engineer, because engineer can build nodes and thus increase all resources that a commander needs to spawn tanks, drop airheads or simply bomb a strongpoint into a moon country.

Behind every winning team, there is a commander and behind every commander is a group of proud engineers. Or maybe just one, because everybody else is hungry for kills.

That one can be you, my friend! And I will do my best to show you how.


So what can engineer do? His primary function is to build. Higher level loadouts vary between factions and are more combat oriented, but the default one is equiped with a weapon, a wrench and a hammer as well as some mines etc. With this default loadout, you ought to focus on that building part of your job

Resource Nodes (one of each kind)

Building is your main job for both Warfare and Offensive game modes. During Offensive game modes you might be asked by your commander to fortify one of your rear points to make it a last stand. I have seen a number of this fortresses and more often than not it can win a battle.

During Warfare game mode, static fortifications are very useful as well, but the shifting of the frontlines might render your effort useless. That’s why you should focus on nodes first.

Resources win battles. No battle is won without some killing, but without enough fuel, your tank squads are stuck on foot. Without munitions, your artillery can’t shoot. Etc. etc.

Best way to get resources is by nodes made by an engineer – you. Join a game and check the map. If there are three sets of nodes (yellow circles), pick any class you want, your work will not be needed this time.


But usually, there are none so what you want to do is to spawn on HQ that is as far from your last point as possible. E.g. Your last stand is on the souther edge of the map, so you would like to spawn at the north HQ. And you want a supply truck.

During the start of the game, there is one supply truck, but it usually gets grabbed by somebody else, either to use as a personal cab (BAD), or by a squad lead/commander, who will utilize it to build a garrison (GOOD)


But you want your own anyway, so spawn far away from frontline and either use voice chat to ask your squad lead, to ask commander for one; or just type magic phrase into the team chat:

Commander, could I get a supply truck on top spawn for bulding nodes?


I have never, ever met a commander who would told me off and usually you would get what you desire most – a supply truck loaded with two crates of supplies worth 150 each.


Now you want to drop one crate and use it to build all three nodes. But you cannot drop a crate in first two grids of the map so you need to drive just at the edge of a third grid and drop ONE crate there. Save the rest for later. 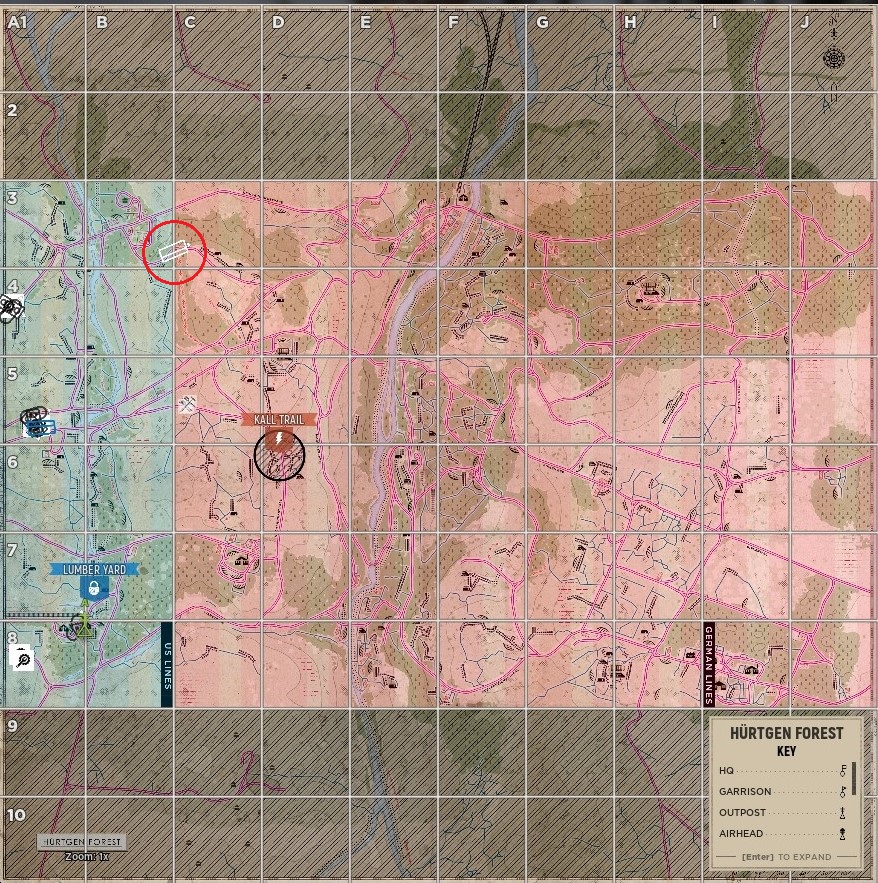 As you can see here, I choose the position as far from combat as possible


Why would you drop those supplies there? Best place for nodes is as far from pesky wandering enemies as possible, so they would not dismantle it. You can build them only in friendly sector and if that sector gets captured by the enemy, the nodes would disappear. So you drop your supplies on the edge of the first and second sector and build your nodes in the first sector. That way they will never go away, if you are forced to retreat. If enemy captures your last sector it doesn’t matter anyway…


This is the best way to build nodes: 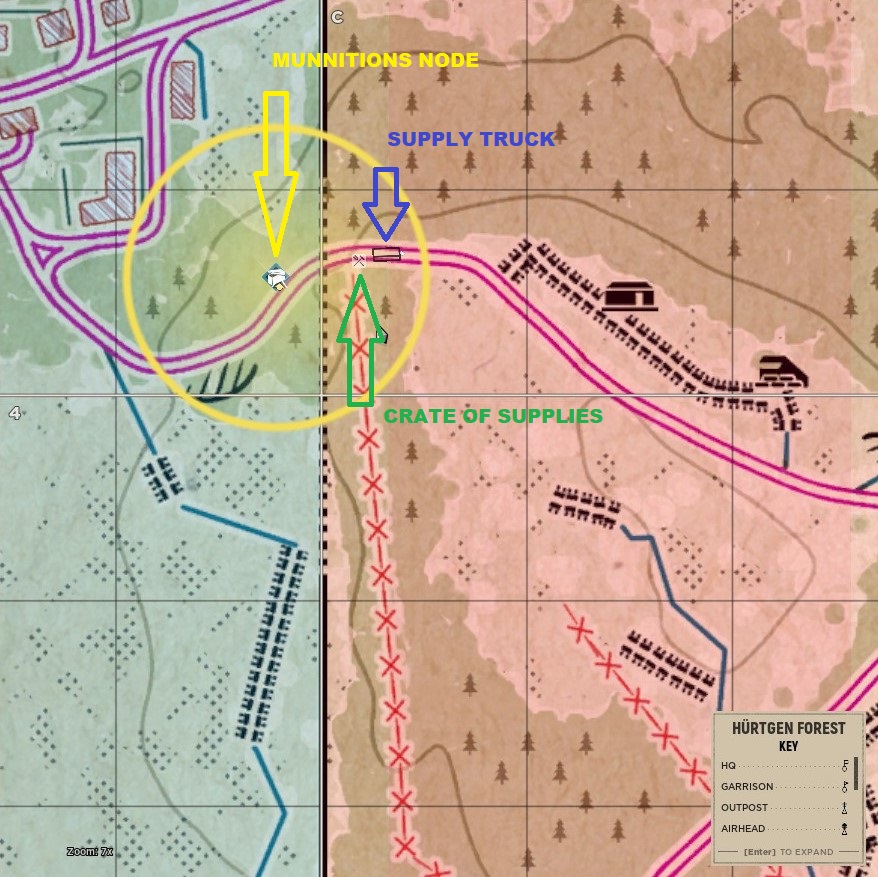 Now that you got your supplies in place it’s time to build. Take out your wrench and find good a position to place your blueprint. Your supplies have a pretty good reach, so you don’t need to place it right next to the crate. 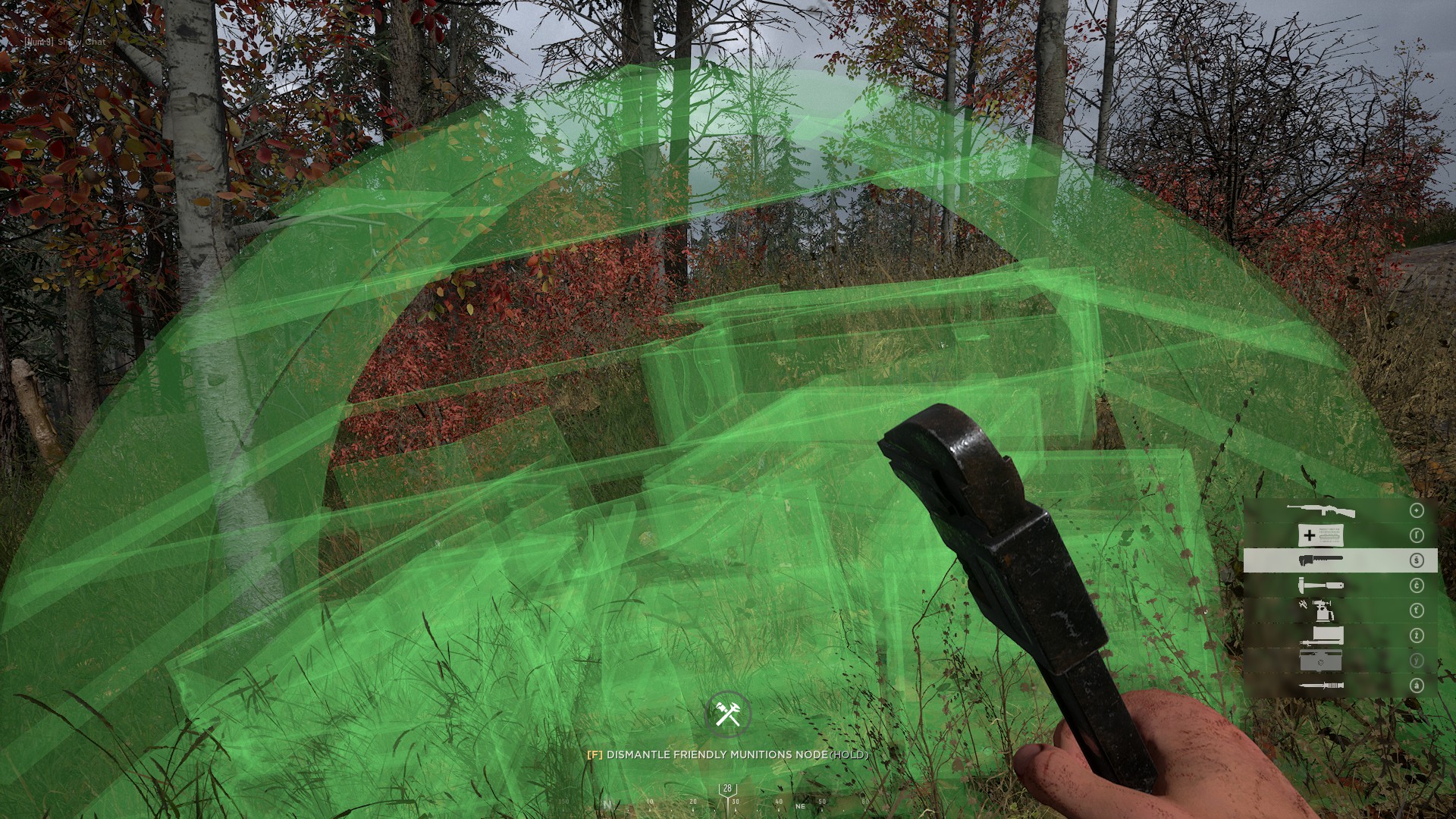 If possible try to use some structures or vegetation for cover, so your nodes would blend in to the environment as best as possible. Not every recon squad has the patience to search for and dismantle nodes, but every now and then there are some who would stumble upon them by accident and dismantle your hard work. Don’t make it easy for them. Nobody has a patience for checking every courtyard, hedge, wall corner, every nook and cranny.

Many maps have good positions for hiding your nodes while being easily accesible by truck.


Use your wrench to place down the blueprint and use your hammer to smack it into existence. 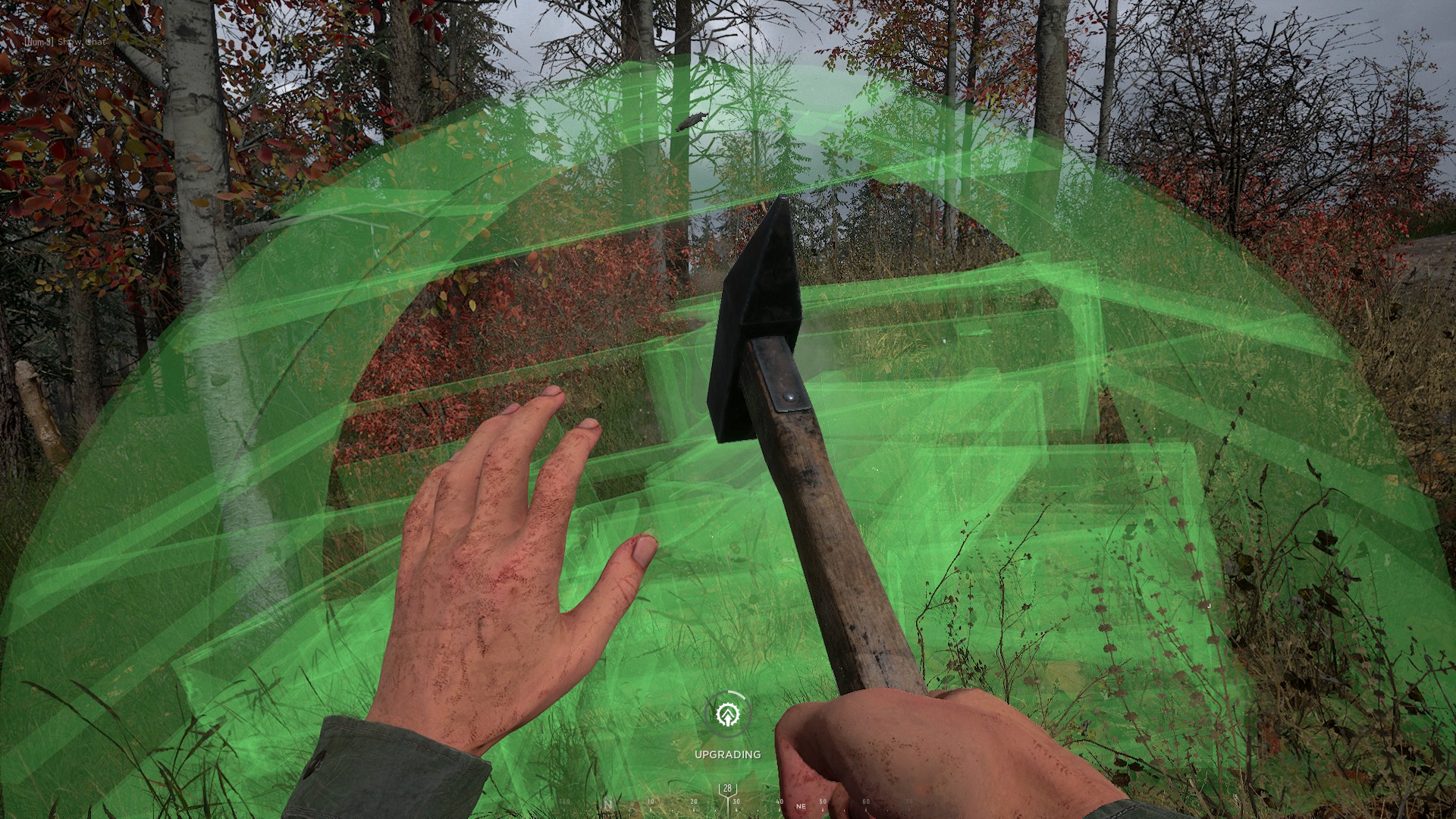 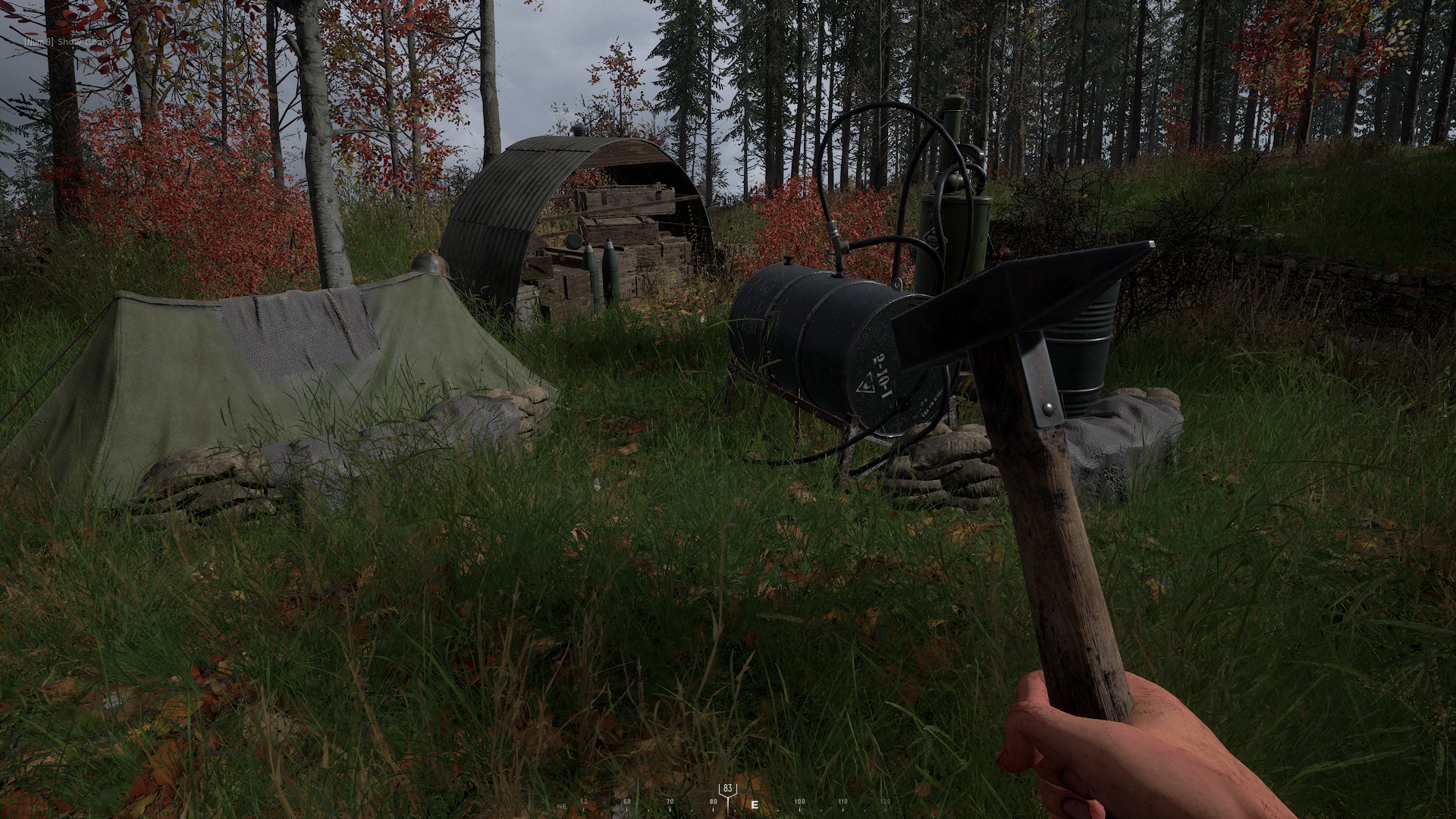 Congratulations, you just earned yourself many thanks and love from your commander. <3

Now that you build those much needed resource nodes, it is time to solve your existential crisis after fullfiling this purpose. You still have a supply truck with one crate, don’t you? Also you are close to HQ, so you can just turn around and reload it, before driving into the sunset. Your call.

Anyway, you get back to your truck and drive it to the frontline. To a safe distance of course. You can either deliver those supplies to a squad lead in need, so he can build a garrison for your team or you can find a good crossroad and drop a crate there. You can build a repair station for your tankers.

There is no need for elaborate research of a good place. Tanks and most vehicles use roads, find one that would probably be most used by your tanks if they are forced to retreat from combat to repair and/or resupply. Drive your truck to the side of it and drop a crate.

Do not drop it in the middle it would be an annoying obstacle. Repair station only costs 50 supplies, so there would still be a crate with 100 supplies left, thus it would annoy the bejesus out of every driver going through.


Pop out your wrench and drop a blueprint on the side of the road for same reason. You want your tanks to be able to drive around it. 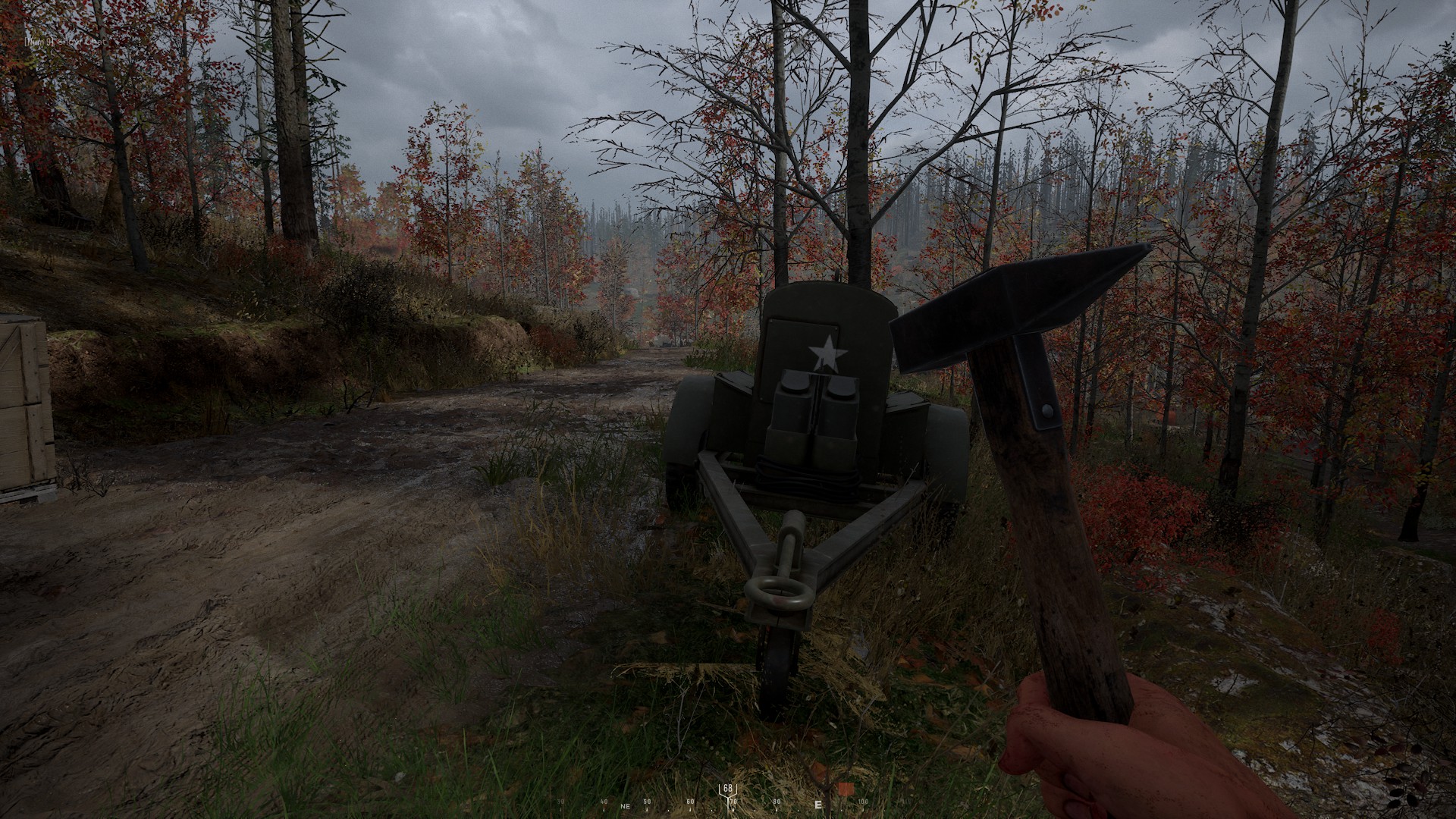 
Again, if possible, use some structure like a house or a wall for cover. Repair station is a good target for your mischievous enemies, but i didn’t see it very often to be specifically targeted.

Drop your blue print, smacky-smack and voilà. You might have just saved some lives today. Don’t forget to open your team chat and write “Repair station is up at GRID POSITION”, so your teammates know about it and you would get some credit. Everbody needs some appreciation.

Resource nodes are your bread and butter, but so are the fortifications. Sometimes the battle would require you to build a static fortification and those can be real game changers. Sometimes a lonely bunker can provide your squad with firing position, while your enemies, will crawl through mud and blood, grasping for every small cover.

Especially during Offensive game mode, your fortification skills can turn a farming compound into inpenetrable fortress.


Building a Hell Let Loose Castle requires a LOT of resources, so you will likely need a dedicated supply truck driver to make deliveries, or your commander would have drop you some gift from the skies.


Sole structures are cheap, when builded on their own. All you need to build some basic wall during the heat of battle is a lonely crate worth of 50 supplies, dropped by your support. With that you can build a barricade, giving your team small, but very useful cover.

The process is same as with nodes. Use your wrench to place a blueprint and use your hammer to build it. 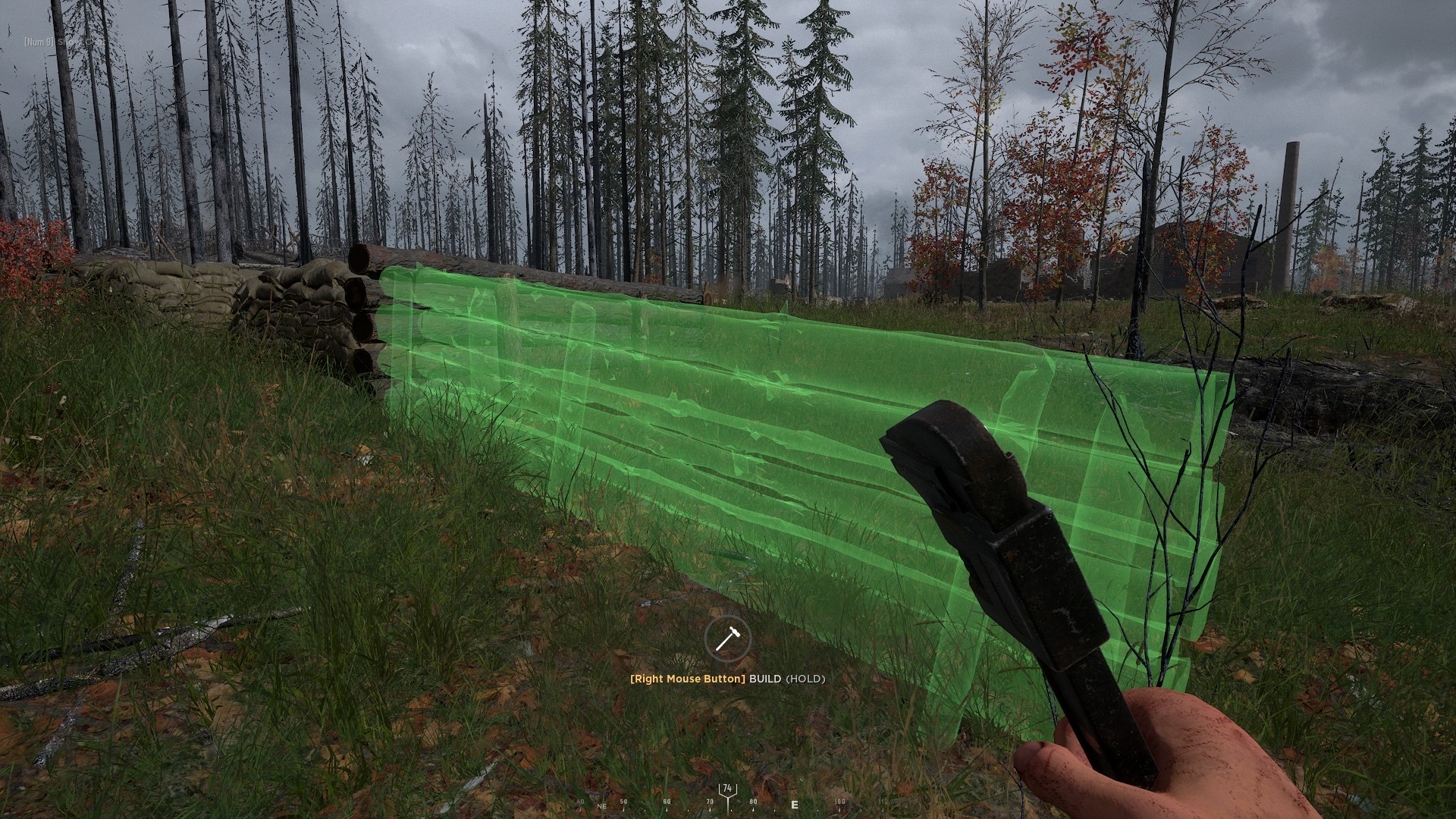 You can turn the unplaced blueprint around, which is very useful when you want to place barbed wire at just the right angle to make it impossible to go through a doorway.


Large scale forts are rarely being build, as they require a lot of time, manpower and resources, but they can sometimes be seen during Offensive game modes as well as Warfare, if the middle point is hard to get.

It requires a lot of teamwork and coordination as well as a will to smack hammer far, far away from combat and fun. But it can be worth it. I once witnessed an insane fort, it took thousands of supplies, 10 different engineers and 4 supply trucks making deliveries. But it was a sight to behold… 15 fully upgraded barricades, 6 fully upgraded bunkers, over 30 barbed wire obstacles.


Here you can see, that fully upgraded bunker and multiple barbed wires and barricades made it impossible for enemy infantry to get through. 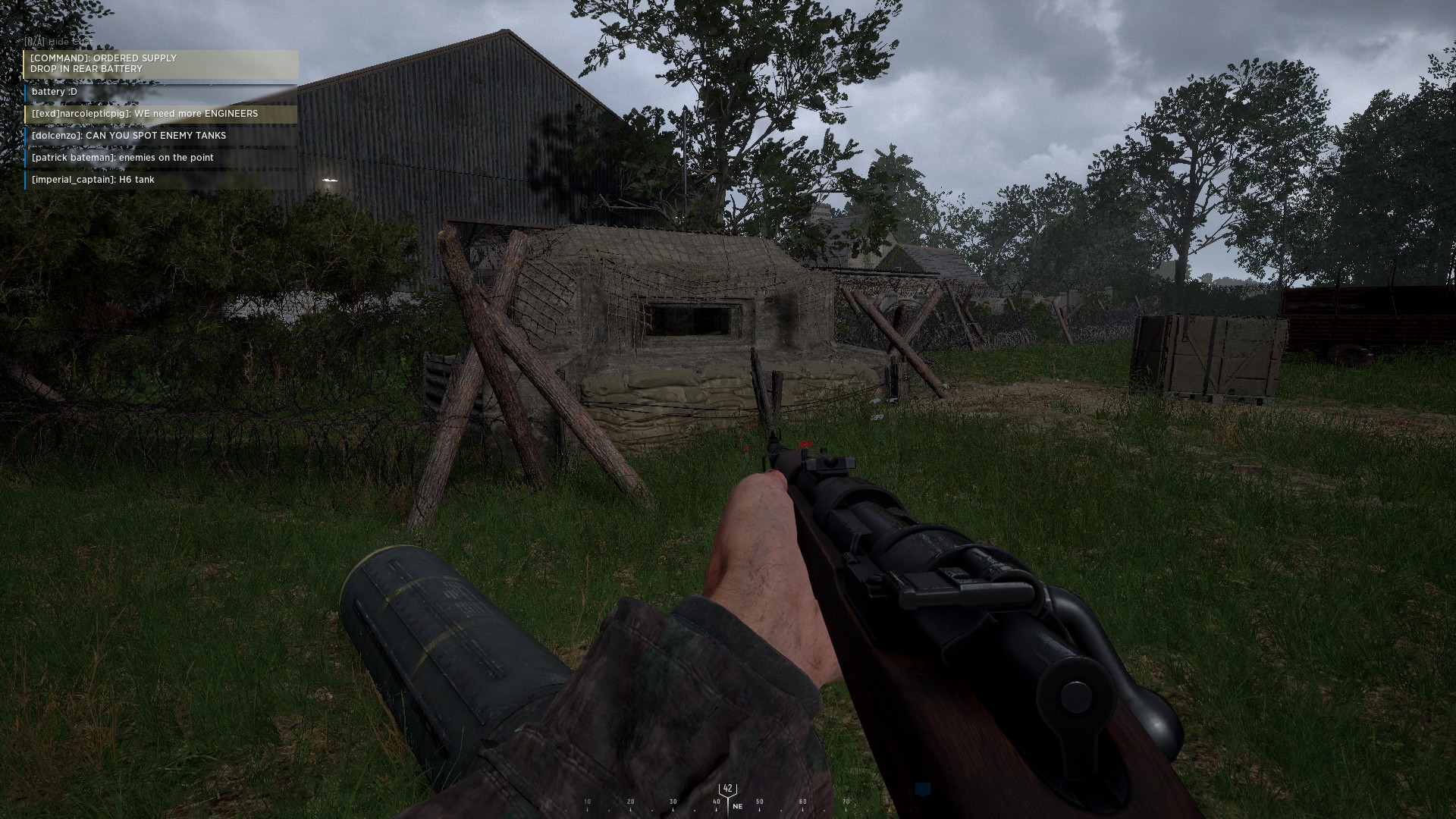 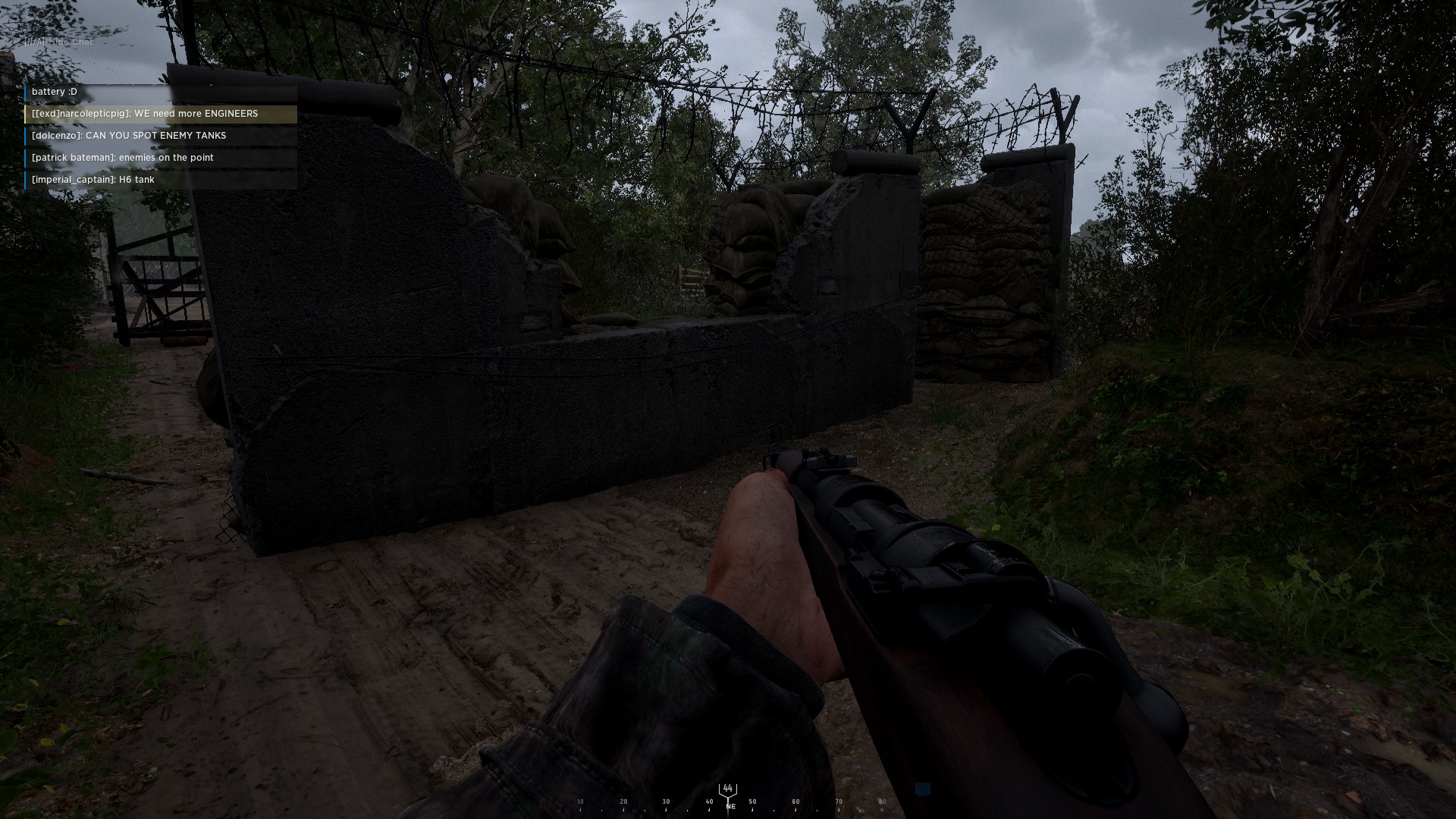 This used to be an open ground, now it is a castle. 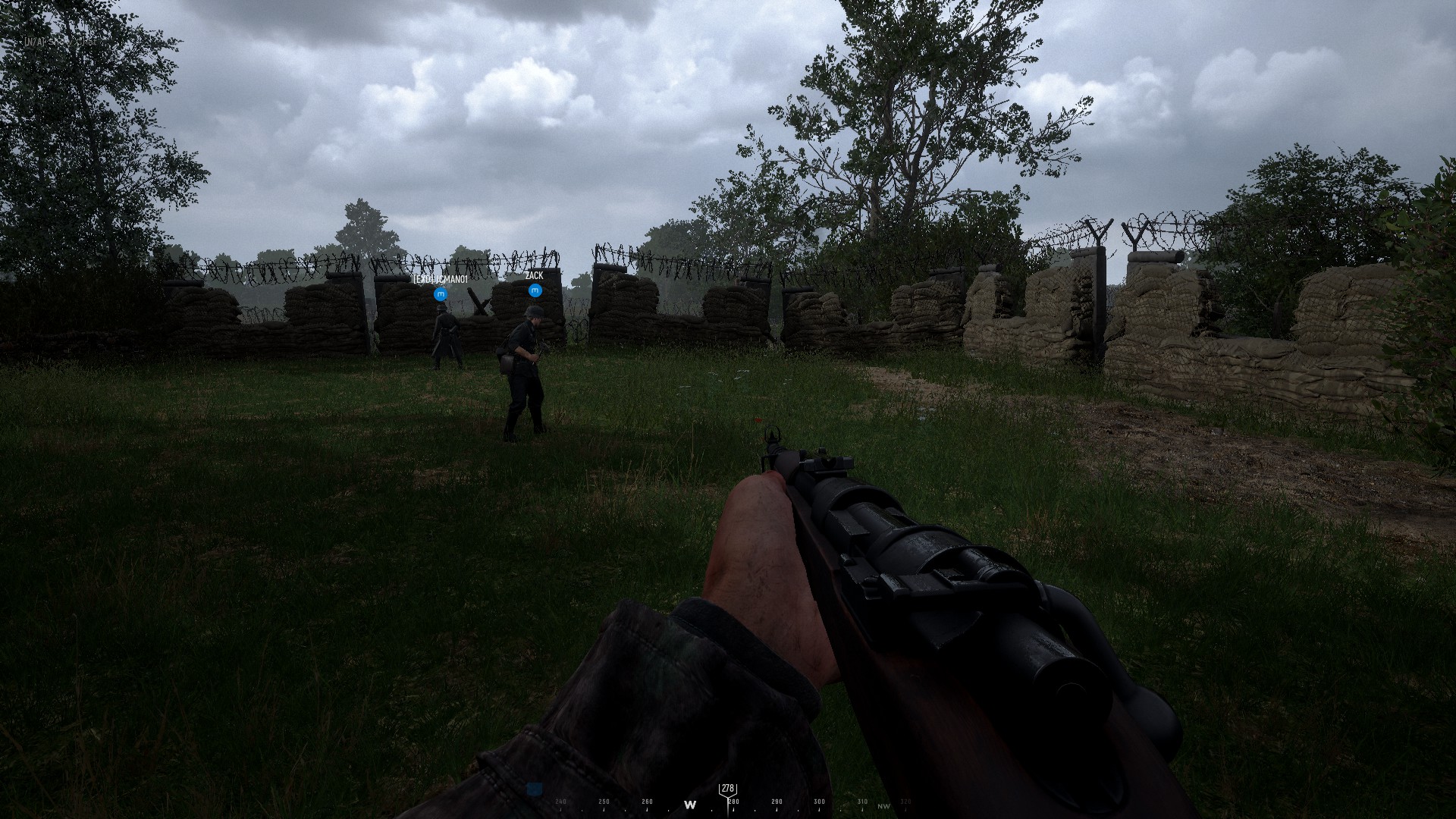 So how to build a fort like that? Barricades and Bunker can be upgraded mutliple times drastically changing how much cover they can provide. Basic bunker has only three walls, fully upgraded has also a roof, walls are higher with smaller fire holes, but you need a ton of supplies for that and a lot of hammertime, meaning smacking the structure with your hammer for five minutes straight.


Basic barricade is just a small wall, but it can provide decent cover. 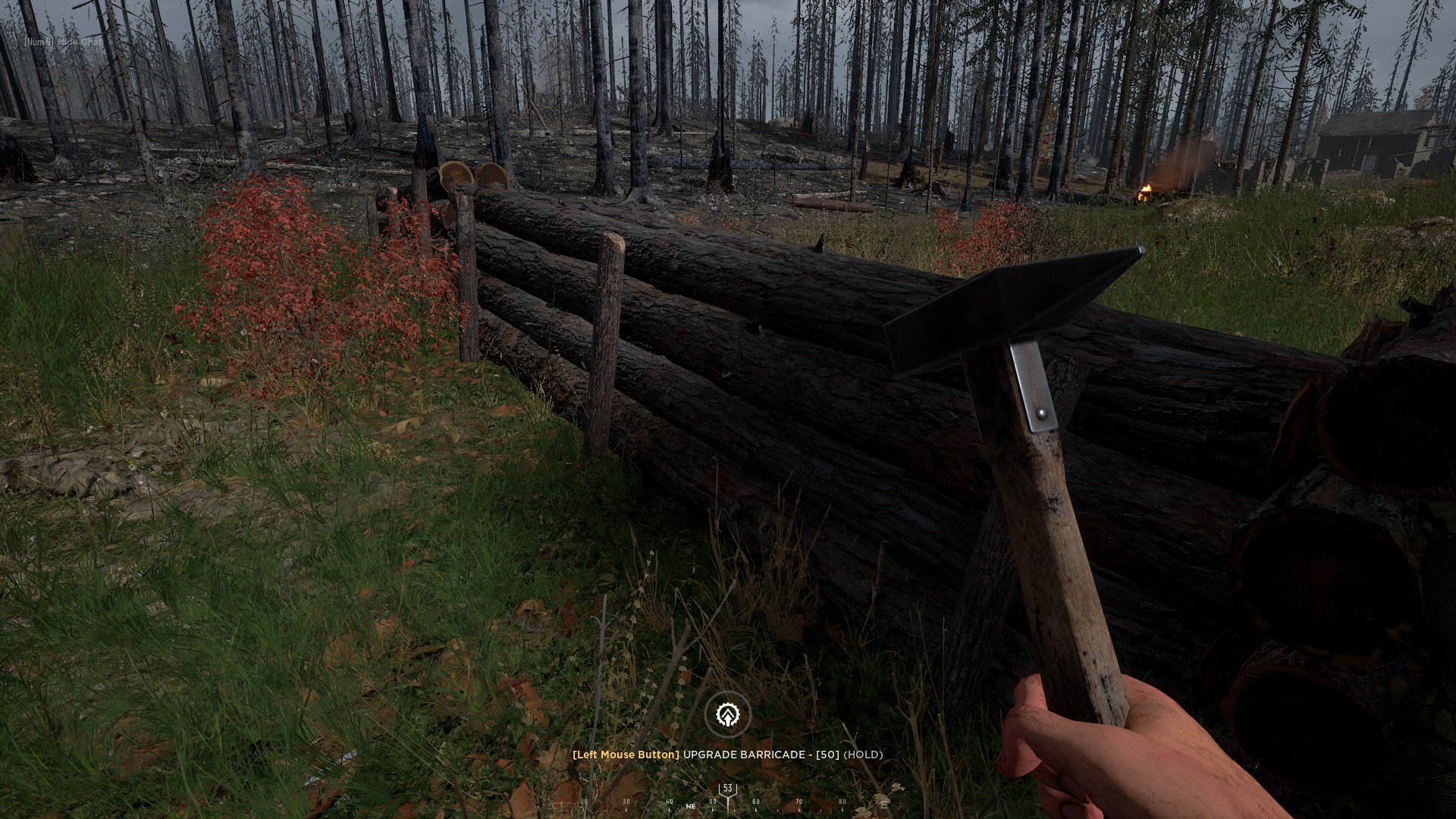 However fully upgraded barricade not only looks boss, but it can give you far better cover

Here is an exemple of fully upgraded US fortification build in the middle of a field. 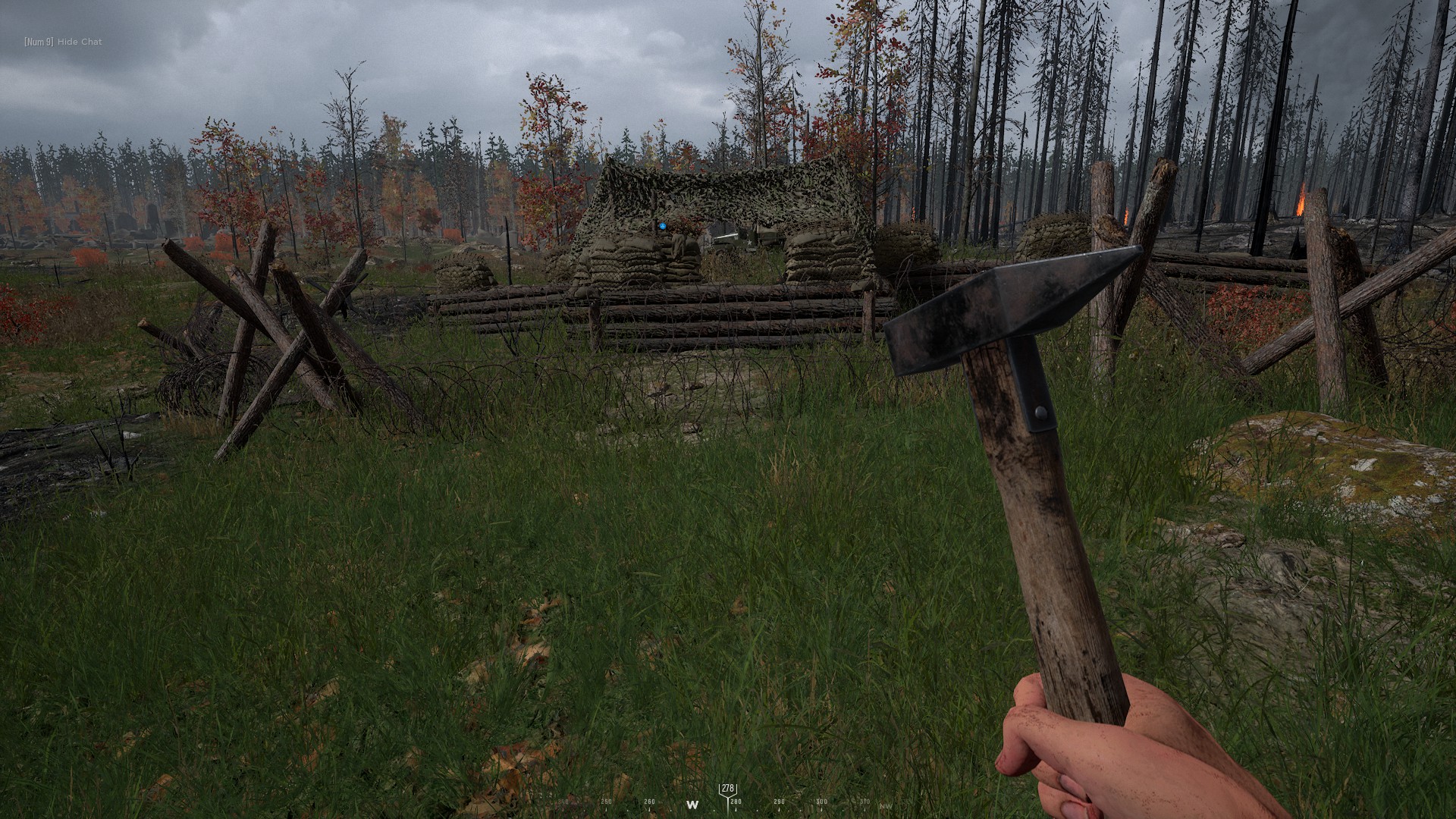 Of course it is best to use your fortification to plug holes in already existing compounds on HLL maps. Place barbed wire to deny flanking manouvres, place bunkers and barricades to provide cover in open areas, use tank traps to deny enemy tanks passage through bridge. Or combine a barbed wire with AT traps to completely lock down part of the map.

Your tools, your creativity. If you are working on a castle with several engineers coordiante your efforts.

Good engineer is always in high demand and if you don’t mind spending some time away from action, you can really show your character. Please, play it, it’s a fun class and part of what I love about this game is the teamwork and feel of bein part of larger effort. Don’t be that solo try-harder who spam chat with his brilliant tactical knowledge.

Be the one who knows that sometimes the greatness is achieved through selfless, hard work.


Be the best you can be, play selflessly, be the MVP of your team!

Nipple Blades SVK for introducing me to this great game

ALL MY COMMANDERS for many supply trucks and for appreciation of an engineer’s work (you great commanders are a reason why I always pick engie first, even though I’d really like to level up other classes too

Hell Let Loose Community for all the fun. I don’t see myself as an avid multiplayer enjoyer, but you crazy bunch? I like you.


See you on the battlefield, enigneers! Godspeed!

I hope you enjoy the Guide we share about Hell Let Loose – Engineer Class Gameplay Playthrough; if you think we forget to add or we should add more information, please let us know via commenting below! See you soon!