guide to hoi4 no step back tanks. i made this for multiplayer. i will try to keep it updated, suggestions are encoraged!

tanks are powerful units in hearts of iron 4. they are not as good as they used to be, but with some tricks they can come a little close to their former greatness. 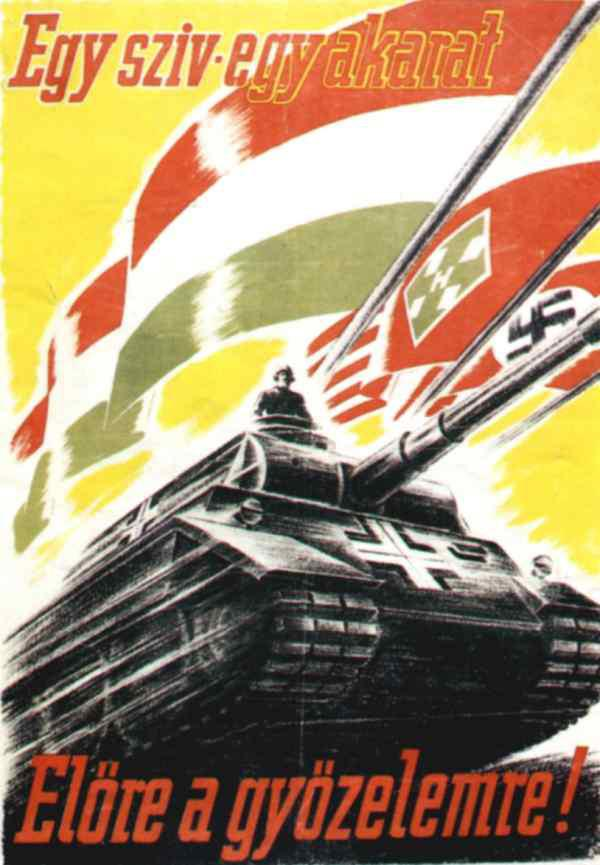 this is a good tank template : 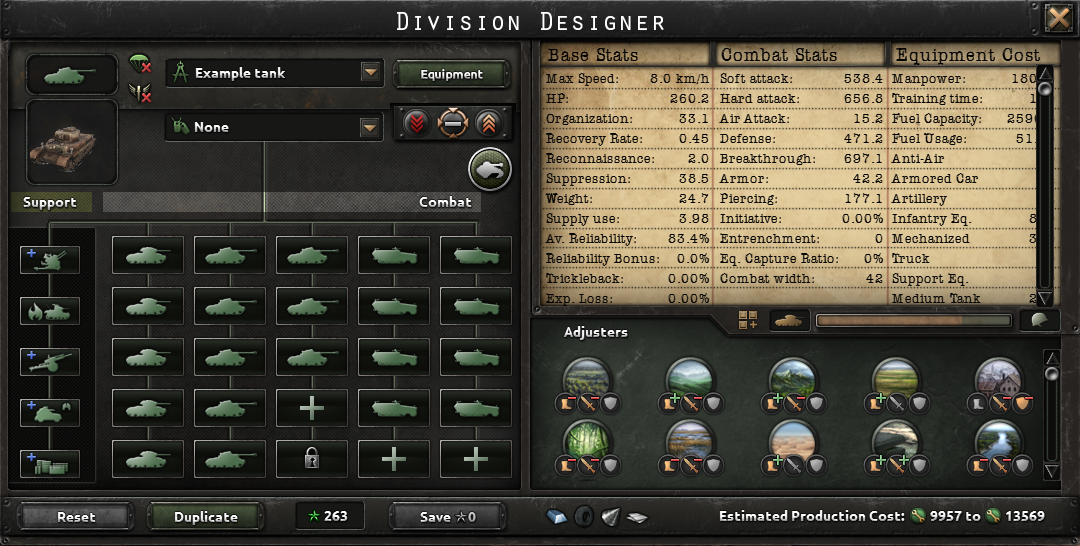 heavy tanks in this update have been reduced to relics of the past, bound by their crazy high production cost and no need to mount the heavy guns on the turret(heavy gun gives mostly hard attack) they become (in my opinion) useless. even if they try to make their armor impenetrable, the amount of tank destroyers in this template should pen them and kill them easily, at a more effective price.

Basics of the tank designer

the tank designer has 6 important common elements, consistent across all tanks.

medium tanks are the battalion that provides the rest of the unit with breakthrough thus maximizing breakthrough is a key to success with a good medium tank design. any modules that are not providing breakthrough should be avoided like : sloped armor, squeeze bore adapter, etc.

there is 4 important modules for a medium tank design.

1. gun : pick the best medium cannon, they provides a good balance between hard and soft attack. high velocity gun 2 might be good, but most of the hard attack is going to be provided by the tank destroyer.

2. turret : pick 3 man turret, they give the best breakthrough bonus.

3. radio : pick the best radio you have, they give good breakthrough modifier.

4. modules : you start out with no stabilizers instead use for extra ammo storage untill you do, they give the 2nd best breakthrough.If you are planning not to use any stabilizers, smoke launchers, armor skirts and secondary turrets can be used to increase breakthrough without sacrificing too much reliability.

there is 4 important modules for a tank destroyer design.

2. turret : pick medium fixed super structure, so you can put the heavy canon.

4. machine guns : we can only add 2 secondary turret. instead add additional machine guns to increase attack by a bit more.

flame tanks have -75 percent to most of its stats, it is not wort it to spend any production on it. this is how you make one as cheap as possible.

if you can spare the production, recon light tanks are great at boosting your stats and making your tank template even better, for some sacrifice to recon. its a trade off to seriously consider.

instead of just researching for tanks before nsb. now you have to research the part that are spread through in different tabs. here are the tabs that have important research on them

support tab is key to getting flame thrower for flame tanks. they are located in engineer 2. 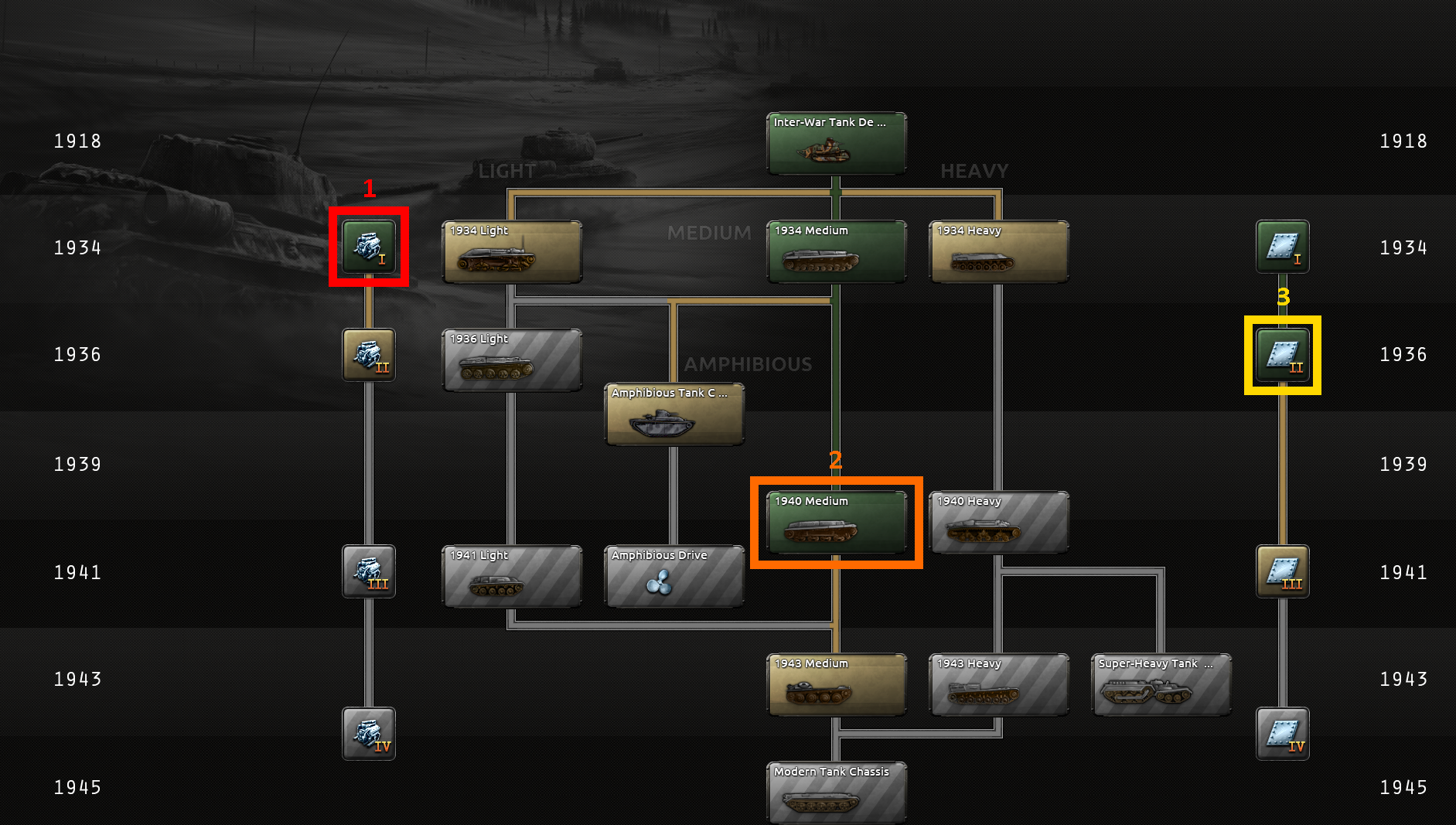 the artillery tab is where your tanks get their punch from here are the most important upgrades. 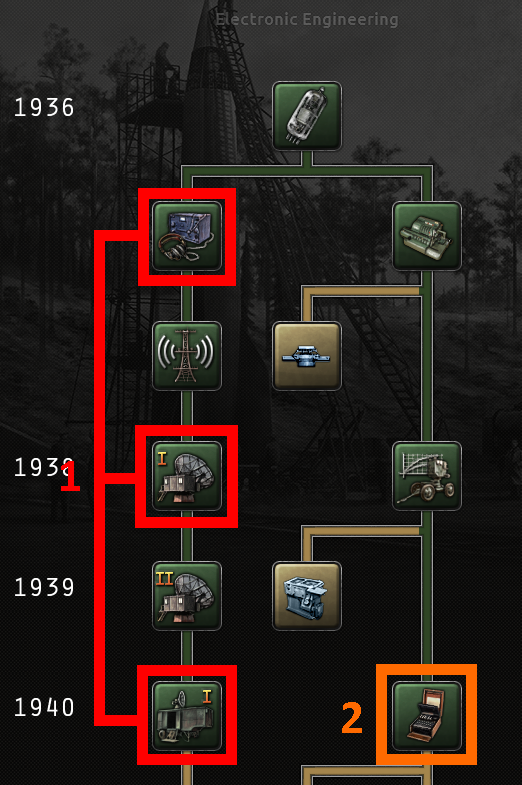 the engineering tab gives you access to 2 very important techs.

this section is talking about the in game tactic that the commander chooses, not tactics as how to play.

the best attacking tactic for tanks is breakthrough.it gives the most attacking modifier of 25%

the second best is blitz. it only gives 15% but it does counter delay so there’s that.

best defending tactic is guerrilla tactics. they give the enemy -70% attack but it also gives you -60% attack. but the important thing is it reduces your combat width and makes neat division people design to fit in the terrain not fit anymore, thus giving them debuffs.

there are only 2 doctrine in no step back that are any good when using tanks, mobile warfare and superior firepower.

in my opinion the best option for any tank nation. mobile warfare provides good breakthrough and let’s you use blitz and breakthrough tactic the earliest. this means you need to spend less xp overall for your doctrine. most of the good buffs are also located early in the tree compared to superior firepower.

the other “viable” option for doctrine. it used to be meta before no step back comes out. superior firepower provides more attack, compared to mobile warfare. however it provides less breakthrough overall and takes longer to get to the good buffs. in that time you will lose to a mobile warfare build.

commanders are an important part of making a tank unit good. these are important traits for a general to command a tank effectively. 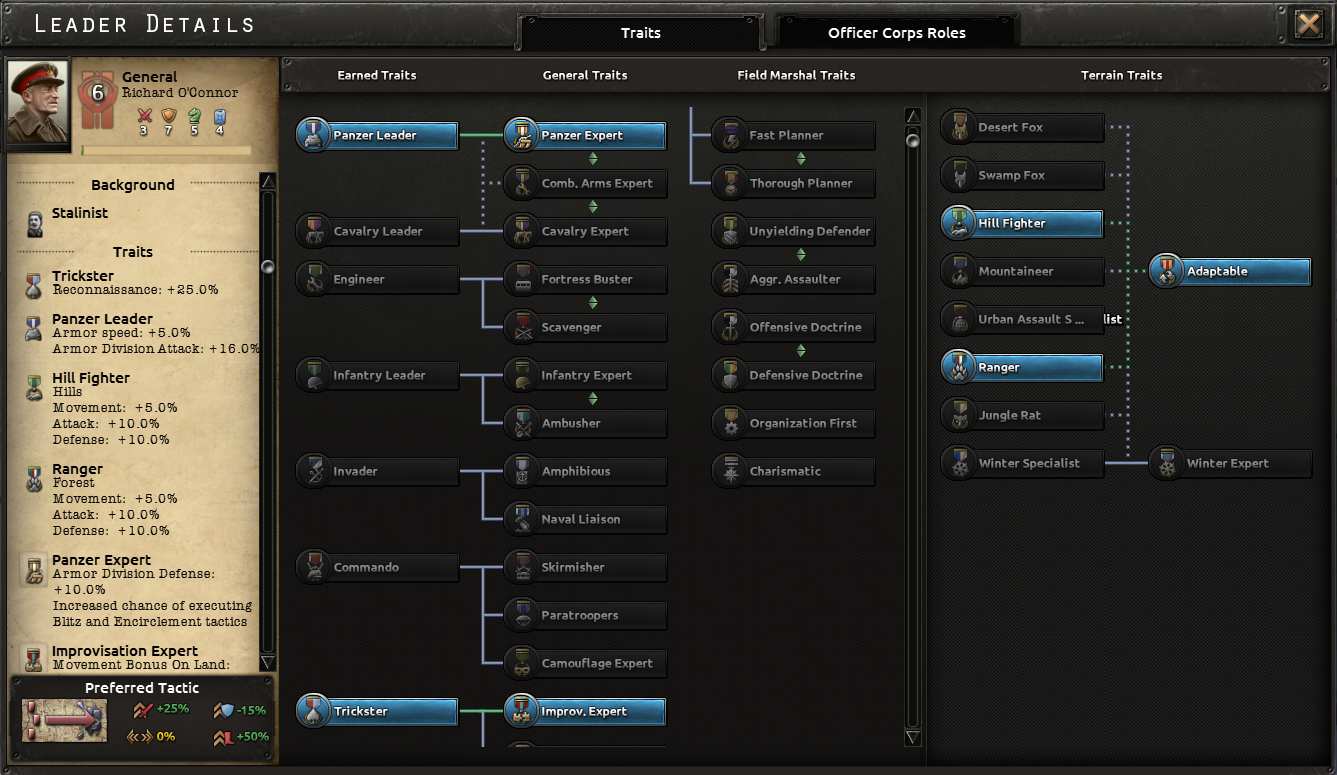 how to use tanks

tanks are a great unit to attack with, with a combination of high attack and breakthrough they thrash anything on the attack. however they are terrible on defense, a tank will (in most common situation) lose on the defense against other tanks.

tanks on the offensive

tanks have high attack, and with the bonus from planning and veterancy they gain an even higher modifier. if we to stack all these bonus the tanks attack would be very high, potentially above 1000 attack.

with tanks being terrible at holding gained ground, it might in some situation be beneficial to start out the battle by using a tank to attack without moving than move in infantry afterwards. like the video below:

note : to attack without moving press ctrl+alt+right click without a front line assigned to the unit. 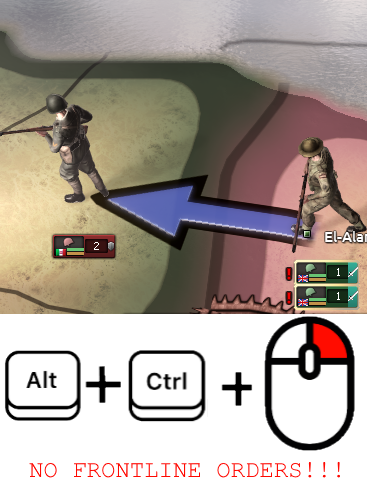 tanks on the defensive

as mentioned before, tanks suck on the defense. to hold ground with tanks, have them sit behind the line. when holding infantry looses the battle, attack the units that just moved into the tile. demonstrated below:

this section is highly theoretical. you will not and cannot achive the maximum results shown.

attack modifiers in this game help each other reach a higher number. the more modifiers you stack the higher the number goes. here are some modifiers that increase attack:

now time to bring it all together: 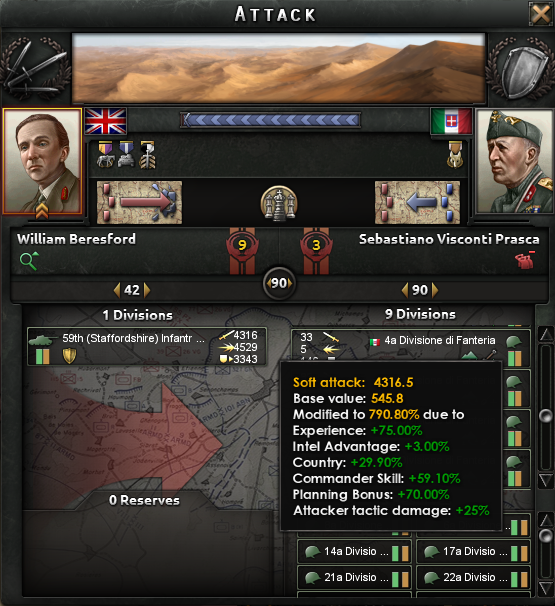 this is the theatrically highest modifier I can think of, but more realistic modifiers might look like this (recreated general from a real game) 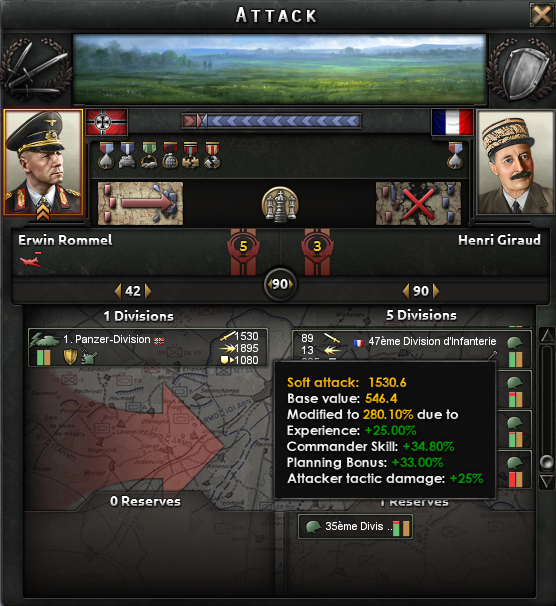 we are done, thanks for reading and leave suggestions or questions in the comment below, so i can implement them into the guide, and make it the best it can be.

I hope you enjoy the Guide we share about Hearts of Iron IV – Tanks Strategy Guide and Tips; if you think we forget to add or we should add more information, please let us know via commenting below! See you soon!