this navy guide is like a crash course on how to build a proper surface fleet navy, a lot of things will be left ignored but if you follow this guide you should beat anyone thats not following it.

This guide is based on the naval meta of hoi4 multiplayer. there is a lot of info left out for the sake of time. this guide focuses mainly on the hoi4 surface fleet. we will not be talking about anti submarine warfare in this guide. 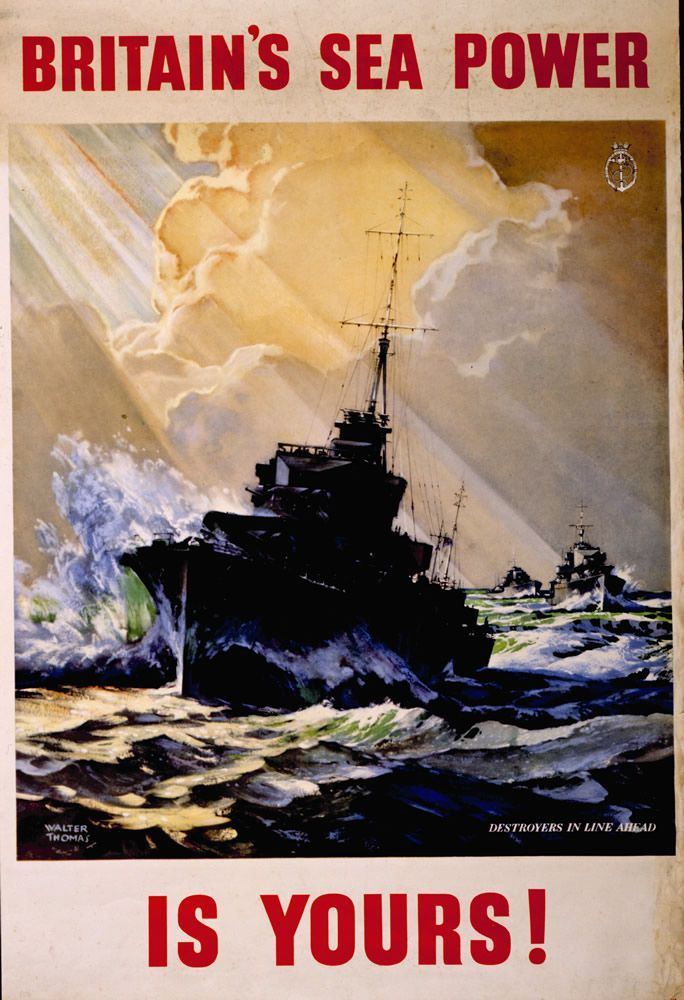 Just build the things from build 1 : the light attack spam, and you will beat anyone that doesnt know the meta.

one of the frequently asked question i get when telling people the naval meta is “why not just build new better ships”, well converting old bad boats is just way cheaper.

as you can see converting halves the time it takes to aquire a good boat. this means that if your opponent chooses to build new ones insted of converting even if he has, lets say %50 percent more dockyards then you, you still win by converting.

“but building new ships lets you also keep the old one!” i hear you(i am inside your walls). well, those light cruiser lying around isn’t going to do much with 8 light attack are they?

converting ships is so great, dockyard counts contribute less then you might think. if a country starts out with a old and weak fleet, but can convert those into good enough ships they are already ahead of countries that start out with close to no fleet. like germany vs uk for example:

germany might have the capacity to build more dockyards but their starting fleet is not even half as good as the uk. that’s why german players ignore the navy and do subs, they have no hope of fighting the uk fleet head on, so they choose to conserve their resources and annoy the living crap out of the allies.

The 3 builds and rock paper scissors.

there are 3 major builds that can counter each other, and a verity of other not so optimized ones.

here is the chart. 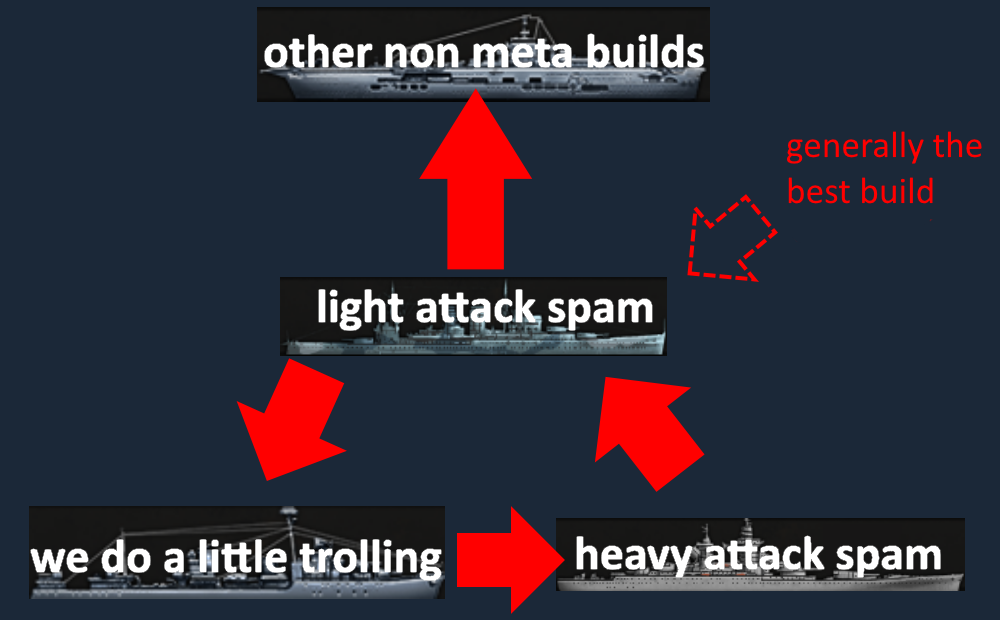 this build relies on these 4 facts :

what this build needs

These heavy cruisers are the back bone of our plan, we need each of them to have the highest soft attack possible, while taking as little time to acquire as possible (convert them dummy)

here is the template:

here are the modules that you should worry about.

these are sometimes called tubs in the community, they are made cheap and made to die. mostly its these are just made to increase screening efficiency, not to do damage. they will disappear when anything with light guns look in their general on vicinity.

there is 3 important modules to a good spam destroyer design.

remember, i am not advocating converting already existing destroyers to this template. I am suggesting you build new tubs with this template.

so you decided to go with the meta light attack spam build, but you have tons of battle ships and battle cruisers laying around that cant mount light attack gun, what do you do? well convert them into aa battle ships. its main job is to provide protection from naval bombers and tactical bombers alike, we need to make its aa stat as high as possible

it however will probably lose to a lot of other un-meta builds like carriers or light cruisers, so the soft attack heavy cruisers are probably better over all.

note this build requires a lot more steel then light attack, take that into consideration.

use the same one in the light attack build, seen in the spam destroyer section.

This heavy cruiser is the back bone of our counter play. we need to maximize its hard attack.

here is the most important modules of the heavy attack cruiser.

Build no.3 : we do a little trolling

you know that your opponent is trying to counter you using heavy attack spam this is going to counter him, by taking advantage of the 1 very important fact.

so this build is based on producing hard hitting screens that cant get hit by the heavy guns of heavy cruisers. this however will be a death sentence if the enemy ends up going with the original plan. light attack will kill this build.

theoretically consist of mostly good light cruisers and destroyer. but since this build is very very very situational i think you can come up with your own designs, not because i never have to use this build before and have no experience. but because its more fun to build your own ships right?

How to convert properly

to convert properly you need to make specific templates for each designs of ships you are converting from. for example.

you can see the difference it makes, because the emerald has a different engine and armor than the adventure, it cost a lot more to change the engine or armor.

following the guide in converting is easy follow 3 easy steps

a better admiral can turn a battle. this is how i like my admirals. its based on a dodge build. naval speed and visibility increases the dodge chance of your ships and thus making them less likely to get sunk, the more dodge chance, the more of an advantage.

you cant really grind admiral traits, there are usually 1 good admiral for each nation. here is a theoretical best admiral, you will never get this, settle for something your country has. 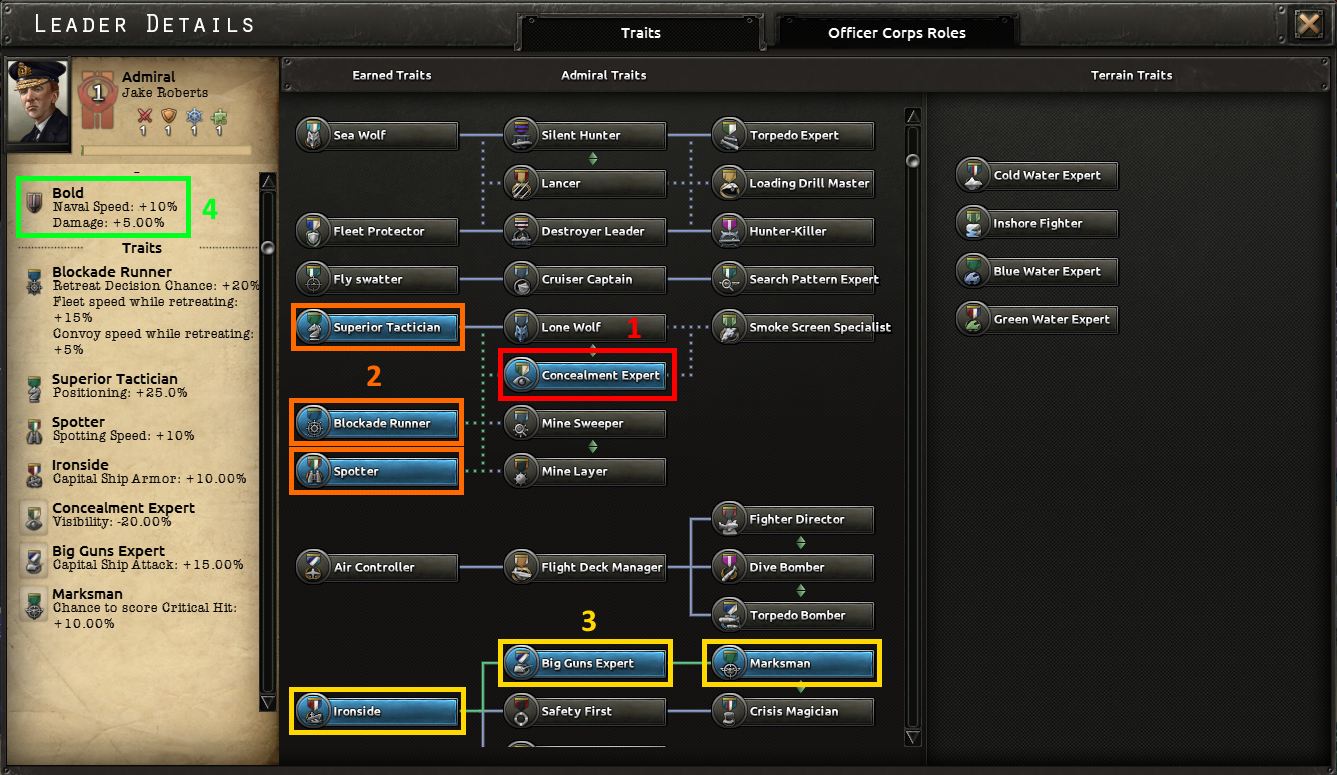 there is one doctrine for NAVAL combat : trade interdiction, its the only doctrine to provide dodge bonus, through -x% to detection. 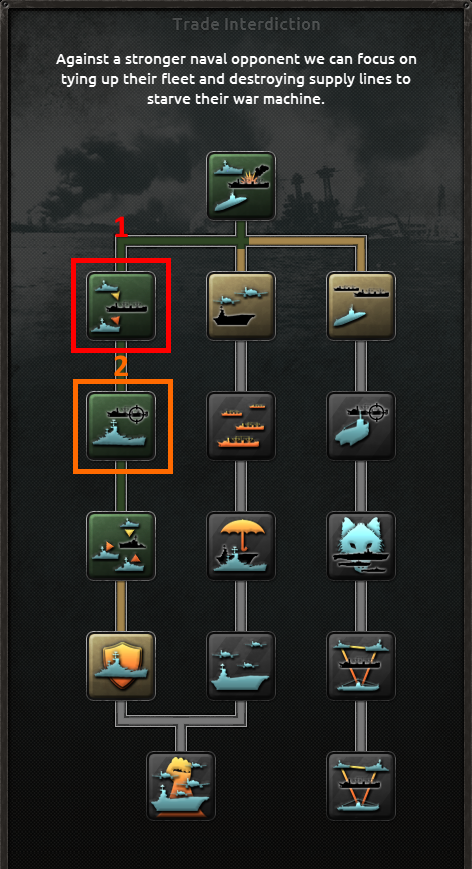 I hope you enjoy the Guide we share about Hearts of Iron IV – Naval Meta All Guns Template; if you think we forget to add or we should add more information, please let us know via commenting below! See you soon!