This guide will teach players some tips and tricks on how to perfect songs a bit easier/gain more score on songs.

Do you suck at Project Diva?


Progress on this game takes real time, blood, sweat, and tears – we all make sacrifices for Miku.


This guide aims to help you understand Project Diva a bit better if you are new or want a refresher! Feel free to comment any problems you encounter and the community will try to help! But as a reminder practice really does make perfect and these are just some tips that might help.


THIS GUIDE IS MAINLY FOR CONTROLLERS, BUT THE TIPS/TRICKS APPLY FOR ALL!


For my sanity and easy understanding for you, I am referring to all buttons as up, down, left, and right and will specify when I mean the d-pad


If you add a comment with a good tip I may add it into the guide for future readers! So, thank you to all who have contributed any tips!

Firstly, I recommend all players change their macro/bindings on controller.


You can do this through customisation of songs, like so: 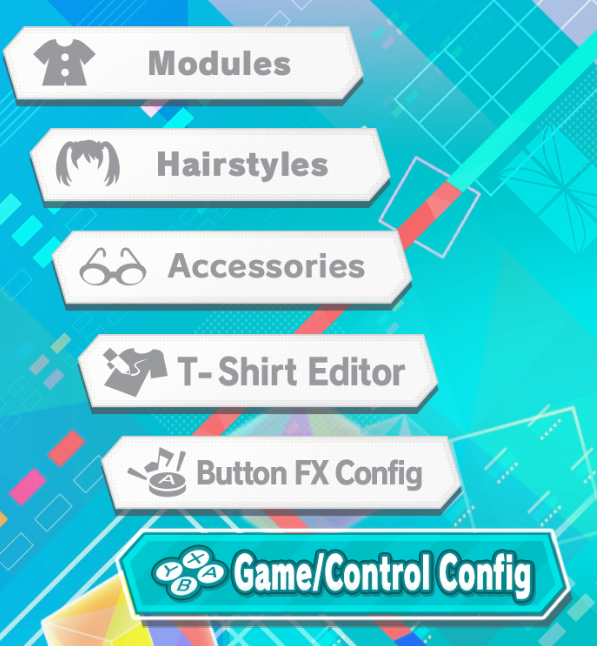 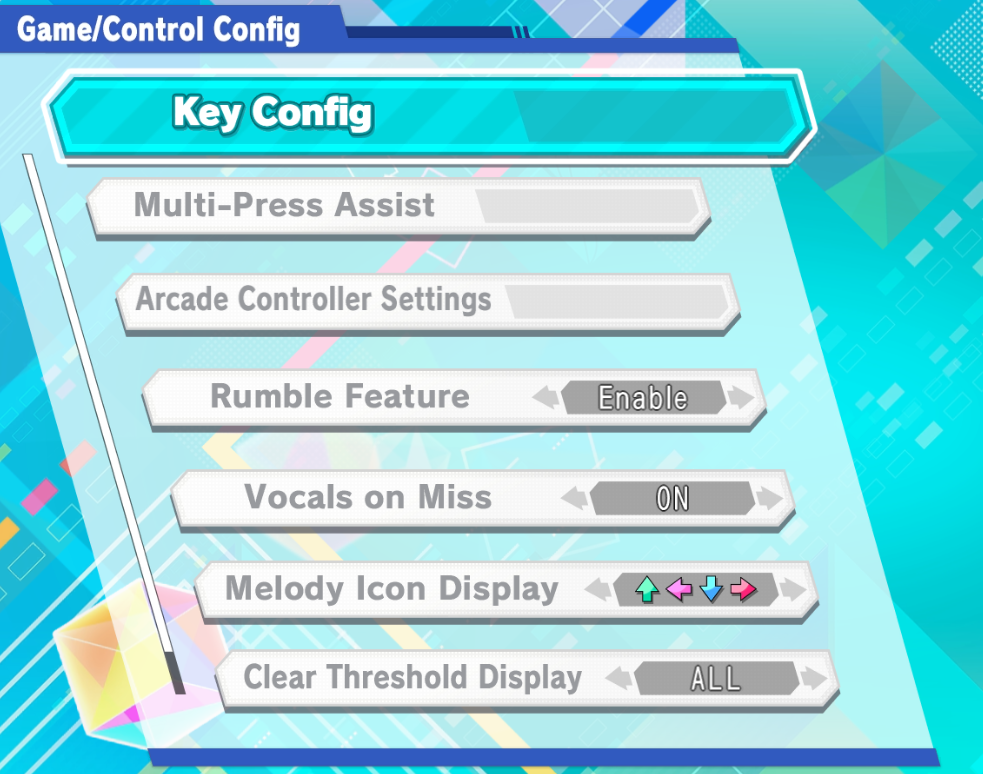 What to change them to:

1. Put your quadruple holds/presses (the four buttons all at once) onto RT/LT


2. Put the left and right notes on RB or LB


3. Put the up and down notes on RB or LB (whichever one you did not use for step 2) – you can change this macro to other double/triple multi-notes if you find that more useful for your play style or certain songs. For example, you might not like fat-thumbing so put RB as down + right and LB as up + left, or if you hate triples put them on there! Simples 🙂


So you will want them to look like so (RB/LB does not matter which way you choose, these are just mine): 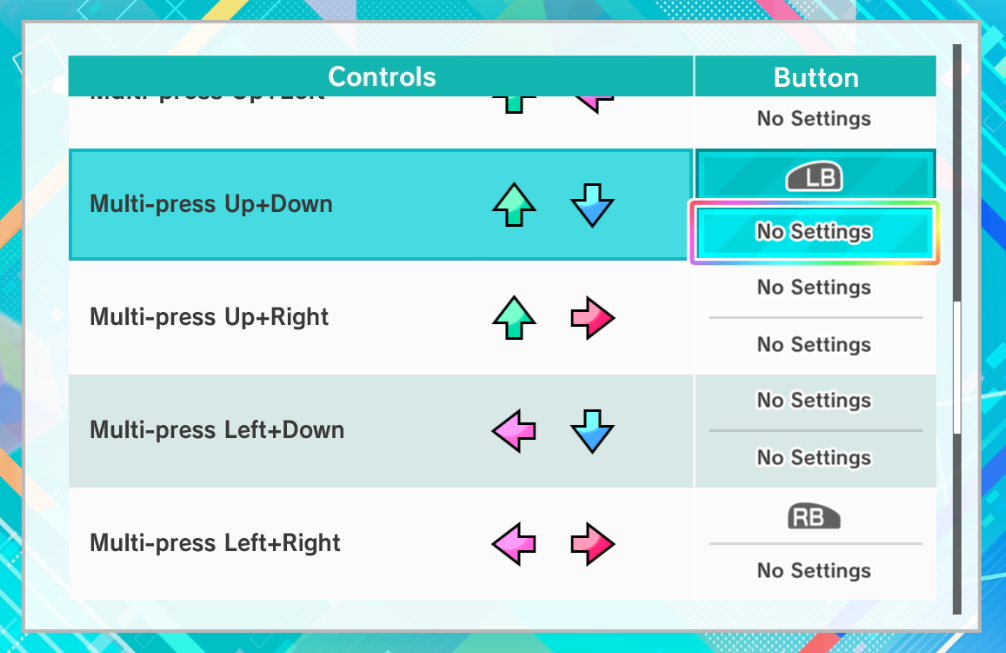 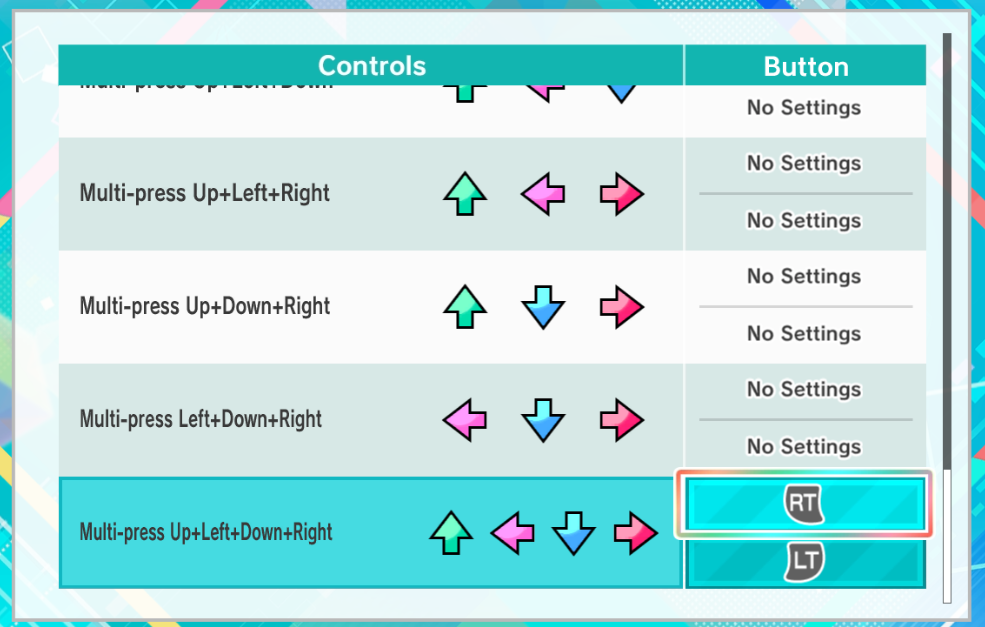 There is also a Hisokee video, where they explain general tips and tricks and the above techniques, you may also like to watch found

. I recommend giving it a watch as its easier to see in action than explain sometimes!

What this achieves – CHEATING THE HOLD SYSTEM!

By doing steps 2 and 3 above you will make those awkward opposite button holds easier by making it into 1 simple button press – just don’t forget which macro is on what side!


By doing step number 1 you get another simpler button press, but, most importantly you get to cheat the hold system. This works by any hold note you have pressed, hold down RT or LT and let go of the hold, RT/LT will then hold that note for you whilst you have your hands free as if you were not holding anything! And if more holds are incoming you can switch between RT/LT to continue with more holds each time. This is quite complex to explain so here’s another Hisokeee video explaining/showing how it works:

With this technique you can gain more hold points than you usually would and it allows your hands to keep up with the songs rather than having them stuck awkwardly on a hold note.


I recommend you start with these macros as it can be quite jarring to learn otherwise (people often get reliant on sliders on RB/LB as its easier) – however, it does come with practice and it may not be for you and you can change the macros to fit your play style or certain songs with difficult notes.

I’ve given some strategies to dealing with quadruple multi-notes and some double multi-note holds if you change your bindings as shown above. But what about the other multi-notes, or if you don’t want to change bindings, how do do you hold them?


For triples (the worst ones):


The best way to hold them is to treat them almost like a double note. Hit the two buttons closest together down by fat thumbing (whichever you feel most comfortable with for example down + left OR down + right) and with the other side of the controller hit the last button needed.


These are the devils bane so don’t be disheartened if they take you awhile – I still hate them with all my soul.

Double taps, triples (and more) of the same/alternating buttons

These are going to come up a lot and its good to learn how to deal with them. When you see two or more notes smushed together those are your double taps, triples or alternating chains.


Double taps of the same note:

When you have two notes pushed together it signifies a double tap you’re going to want to quickly press that same button twice – usually you can just use the same button, a good song to make sure you have figure out double taps is Gaikotsu Gakudan to Riria.


Triple taps (or more) of the same note:

Triple taps are a bit harder and for these I recommend alternating between the d-pad and buttons; for example, three left buttons appear you would want to quickly press left button, left on d-pad, left button again. You can spam triple taps sometimes depending on the pace of the song but I recommend this alternating technique for when spamming won’t work. This technique works the same with 4 quick notes and more, just continue to alternate and be careful of timing.

When you have a double/triple tap not of the same button you will want to alternate between the two sides of your controller! So a quick double tap would be for example right button then a quick down button on the d-pad.

For triples this works the same way but for the third note go back to the right side of your controller, i.e. right button, quick down button on the d-pad, quick back to the other side of the controller.

This pattern uses the same technique as triple taps of different notes (seen above), you just continue the pattern for those longer alternating notes – since the notes alternate, alternate on your controller, I promise once you get it, you will get it! A good song to practice this technique on is Summer Idol on extreme right at the beginning.


Chains of notes that make you circle around all the buttons

For anyone wondering how to handle chains that involve pressing all the notes one after the other (think sand planet extreme) this is where using both your hands comes in handy.


Say the chain has you do up, left, down, right which is a very common chain you’ll see in upper extreme songs. Your primary hand will obviously go to press up as its first and normally you might want to immediately go right with it next, instead press right on your other hand. This gives you enough time to move to press down on your primary once again which in turn lets you press right on your non primary hand right after.


The same principle can apply to chains that either are the reverse of the one mentioned or the triple chains such as left, down, right or up, left, down. At first it’ll seem awkward but with enough practice you’ll find this method will help you keep control of your chains to be able to move into inputs once again. The best song to practice this on that allows you to to practice this technique before speed is the beginning of Aikotoba that has you doing the first chain i mentioned over and over again for a bit. Just hop into practice mode and bookmark that spot until you start to feel more comfortable with how you’re supposed to move and do your best to incorporate it into actual songs.


Thank you to @Samuug Kamui for the tip!

So, if you have done the above then there are only a few more general tips I can give:

Just because there are hold notes does not mean it’s good to hold them! Sometimes its better to let certain holds go to hold onto incoming holds – this can be quite difficult to figure out but after playing a song a few times you will see what I mean (Teo on hard is a good example – those holds are best done singular and released when you see the next hold, bar a few – go play it you will see what I mean after awhile)

Sometimes its good to use the practice if there is a section you are particularity struggling. OR if you are stubborn (like me) you could just replay the same song 1000000 times all the way through until you get that one part right.


3. Do not be scared to use both sides of the controller i.e. USE BOTH HANDS ALL AT ONCE

You have the up/down/left/right buttons and your D-pad. USE THEM BOTH! It’s very handy for triple notes (i.e. a quick left button, left on d-pad, left button again – some triples you can spam but it’s gonna get hard), use it for alternating quick notes (i.e. down and left x50 – good example is Summer Idol on extreme at the start), and its handy for holds if you don’t want to put them on RT/LT just yet. USE THE D-PAD, USE IT!

If it shows you what notes you have to be pressing for multi-notes, GET RID OF IT. RIP THAT PLASTER OFF! You become too reliant on it telling you, that you don’t actually know how to do it. Once you get to extreme you will not know what you are doing or what to hold. Learn it on hard so moving to extreme becomes easier (it happened to me ;w;). You can remove it in customisation of the song.

You can change the button icons in customisation – do what you find easiest! I always find arrows best allowing for easy readability and if you switch controllers its easy to understand, but this is my personal preference, not necessarily yours, play around with it!


6. Go with the flow – don’t panic and trust yourself

We all succumb to the pressure of this game, so if your hand suddenly switches to using the d-pad consistently mid song, go with it, the moment you start thinking you have made a mistake you will mess up, go with the flow and switch back to the other side of the controller at your own time/when the song allows it. You think you saw a right + up multi-note coming in a split second? Trust yourself – if it’s wrong you will remember its wrong!

Some songs are pure muscle memory – for example Cendrillion on extreme at the end hits you with loads of various multi-notes, once you know what multi-notes are coming at you it is easier to understand and follow the pattern. Keep trying! Never give up!


8. Take breaks and NEVER GIVE UP!

Project diva hurts. Not just your hands, but your soul – you get that one safe at the end? Hurts man – take a break, stretch, touch some grass, come back to it tomorrow. You will have thumbs of steel soon.

Best of luck to you and I hope my tips help somewhat!

If I missed something do let me know or put it in comments.

Also watch Hisokee’s videos they are very helpful (they have loads of guides and tips) and are just plain impressive to watch, you can be that good I believe in you!


Ultimately remember practice makes perfect – so don’t you ever give up!


Need further help? Maybe someone can help – put it in the comments!


I’m cheering you on,

From a try-hard Miku player <3

I hope you enjoy the Guide we share about Hatsune Miku: Project DIVA Mega Mix+ – How to Cheat Hold System Console Users; if you think we forget to add or we should add more information, please let us know via commenting below! See you soon!