A personal list about which boons I think are the most useful, fun or impactful, based off of 90+ hours of game time and 100% completion (with all achievements).

Introduction (Guide is a WIP)


Be warned, there are some spoilers ahead in the videos.


From the story, visuals, dialogue, characters, soundtrack and gameplay, Hades truly excels at bringing you an immersive experience. Here we’re going to be discussing the latter, specifically how boons from various gods can change and make or break an escape attempt (as a rogue-like, the player begins each run with nothing, and works their way up. Although, later on the character can be strengthened with different perks to give you more of an edge at the beginning).

There are nine gods and goddesses who will offer you their strength during a run. The rest of the guide will run through them all briefly, and discuss which are the most interesting, impactful, or game-changing. The gods(esses) are: 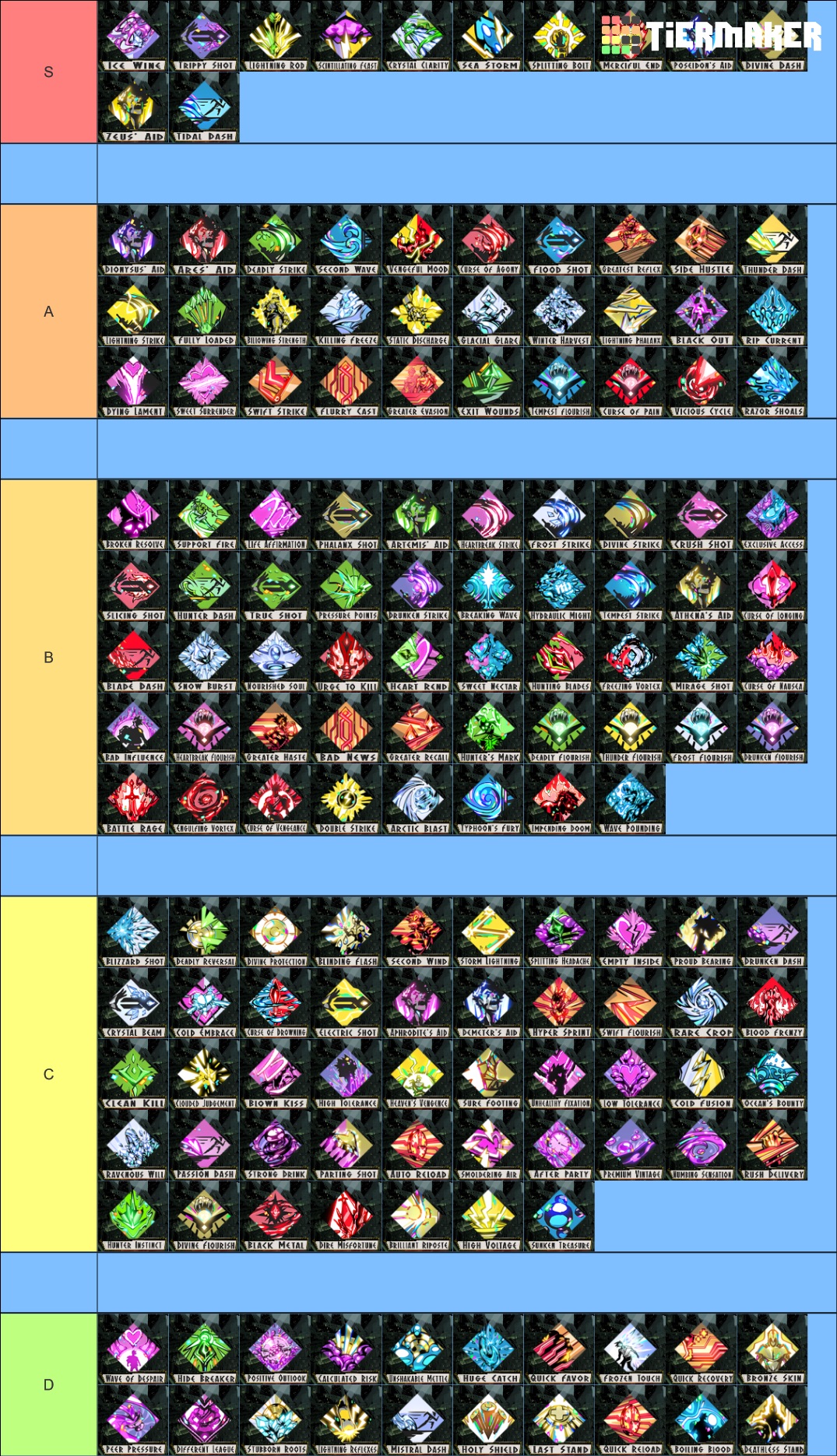 
These three are an S Tier combo piece – and what a combo they make. TS is a Dionysus cast boon, that functions like an artillery blast, doing high damage and stunning enemies caught in its area of effect. With poms and bonuses to cast damage the damage is dramatically increased.


Ice Wine is a Dionysus / Demeter rare duo boon. If you can pick it up, it speeds up the cast animation and freezes enemies in the blast. This works even better with Hermes’ flurry cast, letting you dump ridiculous damage extremely quickly in a reasonable AOE.


Scintillating Feast is even better, dropping lightning bolts around the cloud. This will utterly decimate foes in all arenas, even more so when the room is small, with tightly packed enemies. SF and the Artemis/Zeus Duo Lightning Rod have a similar effect, SF zaps enemies during the cast and LR once it’s over, and the cast souls are sitting uncollected. They both provide very respectable passive damage and ramp up really quickly with more/multiple cast ammo.


In general Zeus boons are very strong, so Splitting Bolt doubles down on the raw damage.


Crystal Clarity might seem odd in S Tier, but if you’ve ever played a meme laser (Crystal Beam) build you know that it’s a must. It dramatically improves the speed and tracking of the beam, enabling it to actually hit enemies that are moving. It’s not really enough on it’s own, but the more cast boons you get, the more devastating it becomes. I put this in S Tier because Demeter Cast can define a run, and CC is the rug that ties the whole room together.


Merciful End is a classic ‘OP’ boon, triggering powerful doom damage every time you deflect, which is easiest to do with Divine Dash, another S tier boon that some players can’t do without. However you do need the Athena attack or special boon in order to obtain Merciful End, a fact I always forget! Divine Dash gives you a moment of invulnerability and attack/projectile deflection during dashing, which is so useful it makes the runs where you don’t have it feel much harder.


Zeus and Dionysus Aids both deal high damage AOE, I rank Zeus slightly higher since the combo potential with Static Discharge and Splitting Bolt/ B Tier Double Strike is quite strong.


Tidal Dash is another dash boon I think is rather good – it does a lot of damage and quick knockback which combos well with other Poseidon boons like Razor Shoals, Second Wave, Breaking Wave…etc. The Poseidon/Zeus Duo Sea Storm adds lightning (you can see I rate adding more lightning quite highly) to your knockbacks, and Tidal Dash is the easiest way to do this.


Here’s a video of an EM4 fight against [Redacted] – you can see how much chip damage both Scintillating Feast and Lightning Rod is doing, alongside my Artemis attack boon. The radius in which the lightning strikes is pretty large. Even though I’m playing recklessly and my huge buffs to speed from Hermes keep making me run into attacks, I do pretty well against our most fearsome foe.

In A Tier we have the combo pieces that offer huge bonuses to your existing boons, or those that are run defining – boons that you can build a strategy around or want to boost up as much as possible.


You’ll probably want to pick these in most cases unless there is a duo or legendary that you need.


– Dionysus and Ares Aids are very strong – the former is similar to Zeus’ – good, simple AoE damage. It’s not as easy to get raw damage as high as Zeus though, so this is why it’s in A tier. Ares on the other hand is also a good source of damage, but even better, it makes you invulnerable for the duration.


– I’m a fan of the Hermes boons. More speed usually equals more damage and general survivability. Flurry Cast is especially nice for cast focused builds, as reduces the animation time quite significantly, especially at higher rarities. Evasion can also be stacked quite high with certain weapons and talismans, becoming a strat in its own right.


– Billowing Strength is really good, especially if you have an aid you will be spamming a lot (i.e. not Aphrodite or Artemis, which work best with full charge).


– Lightning Strikemakes the Adamant Rail both fun and deadly, especially if you combo with Lightning Phalanxfor extra bounces.


Tempest Flourish and Curse of Pain are two of the better Q/Alternate attacks in my opinion, especially with the sword, spear and certain bow variants.


With the right setup or weapon, these B Tier boons are generally pretty strong. They’ll probably won’t be standing out too much on their own though, or they need a few prerequisites to get going.


There are also a lot of Artemis boons in this tier, as I find she needs either high rarity or lots of poms to really rack up the damage percentages. Big Crits can be amazing though, as shown in the first video, where I was hitting [Redacted] for up to 2.2K with a final strike from behind.


I’ve also placed a lot of the Ares Slicing Shot casts here, as they aren’t that effective unless you’re focusing on building up that cast.

In C Tier we have a lot of the mediocre boons, those that I generally wouldn’t pick up or aim towards unless the rest of the options were trash.

TFW you are [Redacted] and got beat by Zag with D Tier boons:

And now we come to lowly D Tier, where I wouldn’t necessarily be happy even if I got these boons for free. Would probably purge and sell most of these as soon as I could.

Hope you enjoy the Guide about Hades – Tier List – Levels & Walkthrough, if you think we should add extra information or forget something, please let us know via comment below, and we will do our best to fix or update as soon as possible!