If you are looking for the best settings for God of War on PC, this extensive guide will give you all the information you need to know.


This guide contains my own research that I found online and that I have tested myself based on my own hardware – due to a wide variety of system configurations there are no guarantees and your mileage will vary. This guide primarily aims to give you a foundation to help you decide what the best settings to use based on your hardware.


There will also be some additional optimisation guide outside the game – which are optional and as a DISCLAIMER please only do so at your own risk. This guide will be primarily for NVIDIA GPUs, however you can expect similar results with equivalent AMD GPUs.

God of War is a descent PC port compared to its previous PlayStation cousins that have released on PC. Though, like everything there are improvements that can be made to make the experience much “better” – which Kratos would appreciate.


I’m sure you’ve already seen the requirements on the Steam Store Page – [steampowered.com]  or the picture below before purchasing this game so please feel free to skip this part if you don’t require further information and would like to head straight to the optimisation. 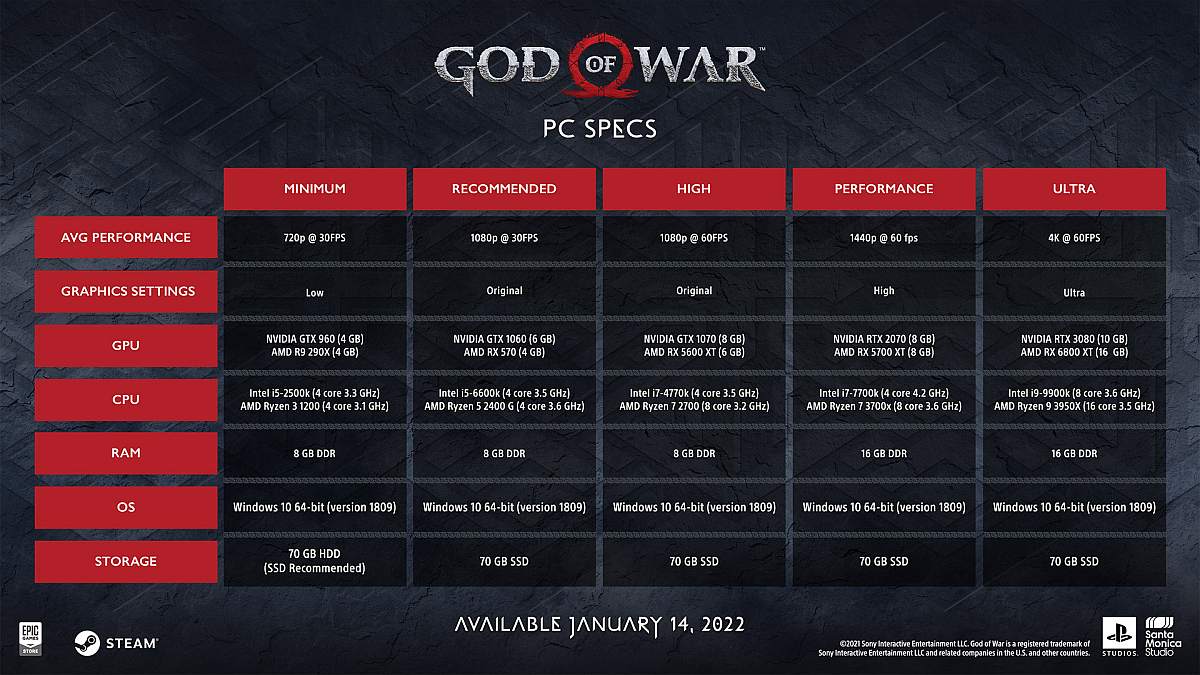 
While the i5 2500k is an older processor the performance compared to the R3 1200 is comparable to the point where the 2500k can actually give the R3 1200 a run for its money. – [userbenchmark.com]  Overall, you can’t go wrong with either processors though it would be best to go for the slightly newer ish R3 1200 or any other more modern CPUs for an optimal experience.


I would always suggest to aim for the recommended requirements. If your CPU is newer than the required minimum then you can expect to run this game at a base 30fps minimum though it will be your GPU that will determine the full outcome.


The game isn’t super CPU intensive from my testing – there can be some minor frame drops even at a locked 60fps at 2k during a seamless transition to a new level on my system. The game aims to feel seamless which is apparent with its seamless cut scenes to game play. Overall, you can expect somewhat good CPU performance on older hardware.


IMPORTANT: The GTX 960 does have a 2GB version as well but should still be okay for the targeted 720p 30fps IF you have a slightly better CPU than the minimum requirement due to the lower resolution as you will be more CPU bound. Below are some benchmarks at 1080p for the 2GB version of the card – which you can expect slightly better performance with the 4GB version.


4GB of VRAM is definitely recommended – though it is possible to play with 2GB but expect to drop below 30fps as it will eat up most of that VRAM. I do not recommend a 2GB card for this game. Though you can always test it for yourself and get a refund should it not run even with the optimised settings.


You can expect slightly better performance – [userbenchmark.com]  with the R9 290X as the game isn’t as CPU intensive though the difference can be very comparable as shown with the benchmarks below.


Despite AMD’s higher thread count – Intel takes the lead of upwards of 20% better performance when it comes to normal usage – [userbenchmark.com] . But how does it actually compare when gaming?


Well I believe it’s safe to say Intel does indeed take the lead. It has been difficult finding similar benchmarks but I thought you can watch for yourself below – I picked a Ubisoft game – Assassins Creed Odyssey as Ubisoft games tend to be poorly optimised so choosing a worse case scenario you should expect slightly better performance on God of War which is more optimised.


You can expect to hit the targeted 1080p @30fps and even exceed that in most scenarios. I’m using AC Odyssey as an example as they were initially both released in 2018 – but GOW making it to PC in 2022 doesn’t mean its necessarily new. I understand they’re both different games which again in theory AC is an open world game which is more demanding and isn’t as well optimised so again you can expect to hit the targeted performance easily.


IMPORTANT: The RX 570 does have a 8GB version as well but the performance is mostly negligible – the higher VRAM does means you can potentially increase the textures etc. but again the performance are negligible as demonstrated below.

The GTX 1060 also has two versions one being 3GB and the other 6GB – which does offer better performance compared to the RX 570.


With some minor tweaks you can definitely reach that 60fps at 1080p though it wont be locked at 60fps all the time.

Now that we have established the system requirements – here are my recommended configuration for INTEL, AMD & NVIDIA.

The GPUs you will need for a smooth experience are:

. This is the minimum I recommend to hit that 60fps at 1080p using the original preset though the fps can drop below so anything higher will be a guaranteed 60fps lock.


The CPUs aren’t as important though I do recommend a minimum 4 core/4 thread CPU. For a more optimal experience a 6 core/6 thread CPU would be ideal.

The GPUs you will need for a smooth experience are:

Both the minimum and recommended only states 8GB of RAM. However, if you are still using DDR3 keep in mind that this will have some major performance impact. As well as, if you are using single or dual rank memory. – [hardwaretimes.com]  Dual rank configs are typically 5-10% faster than single rank.


DDR3 has a frequency range of 800MHz to 2133MHz whereas DDR4 800MHz to 5333MHz. Does this mean higher frequency better performance? Not exactly as it also depends on the CPU. The current sweet spot for both Intel and AMD is anywhere between 3200MHz – 4000MHz where AMD benefiting more with faster speeds.

How Much RAM Do I Need?

As stated in the official system requirements – 8GB is enough to run this game though I recommend to double that to 16GB especially if you like to run other applications in the background e.g Discord, Logitech, NZXT CAM, Corsair, RAZER etc as these will slow down your system.


Adjusting your RAM speeds can be done in the BIOS/UEFI. For Intel it is called XMP – [intel.co.uk]  and AMD it is usually called DOCP. – [howtogeek.com]

What To Expect With My Recommended Requirements

My recommended requirements are based on what I have found and should be the minimum to reach 60fps at either 720p or 1080p.


However, without any optimisations it isn’t a guaranteed 60fps lock. My aim is to go above 30fps and reach 60fps as close as possible which these configurations will definitely do at their respective resolutions. With some tweaking I aim to have it locked at 60fps most of the time!

How The Performance Compares To The Console Version

Just for some comparisons the PS4/Pro version of the game runs the game at 30fps though both have dips below 30fps more so on the base PS4. The

patch of the game which runs the original preset of the PS4/Pro version of the game is locked at 60fps. The aim for this guide is to aim for the PS5 patch performance on PC.


Of course, it will depend on your system and you may need to sacrifice some eye candy to get that 60fps but I will try to provide as much optimisation as possible with little loss to graphic fidelity.

For anyone who have a similar setup as mine or better can use these settings for a locked 2k 60fps performance. If you are playing at 1080p then you should have no issues cranking up the setitngs to Ultra though some settings should still be kept at High for a locked 60fps.


There will be some optimisations outside the game that you might find useful which I will go in detail later through the guide. Though most of it applies primarily for NVIDIA GPUs.


The game currently doesn’t have a full screen option which is odd to say the least. In theory, we are loosing some performance as we are not using our GPU’s fullest potential when running in Borderless. 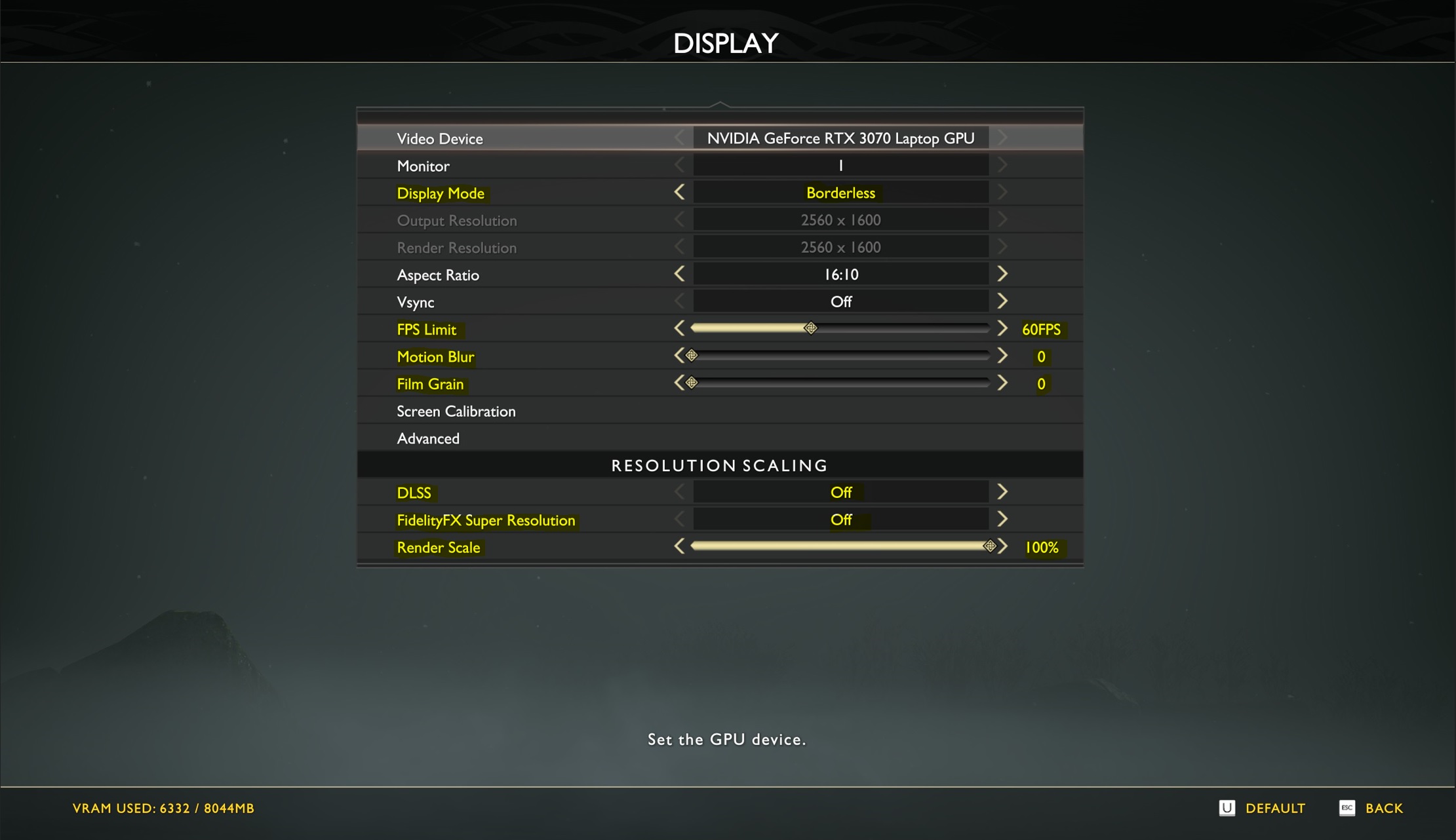 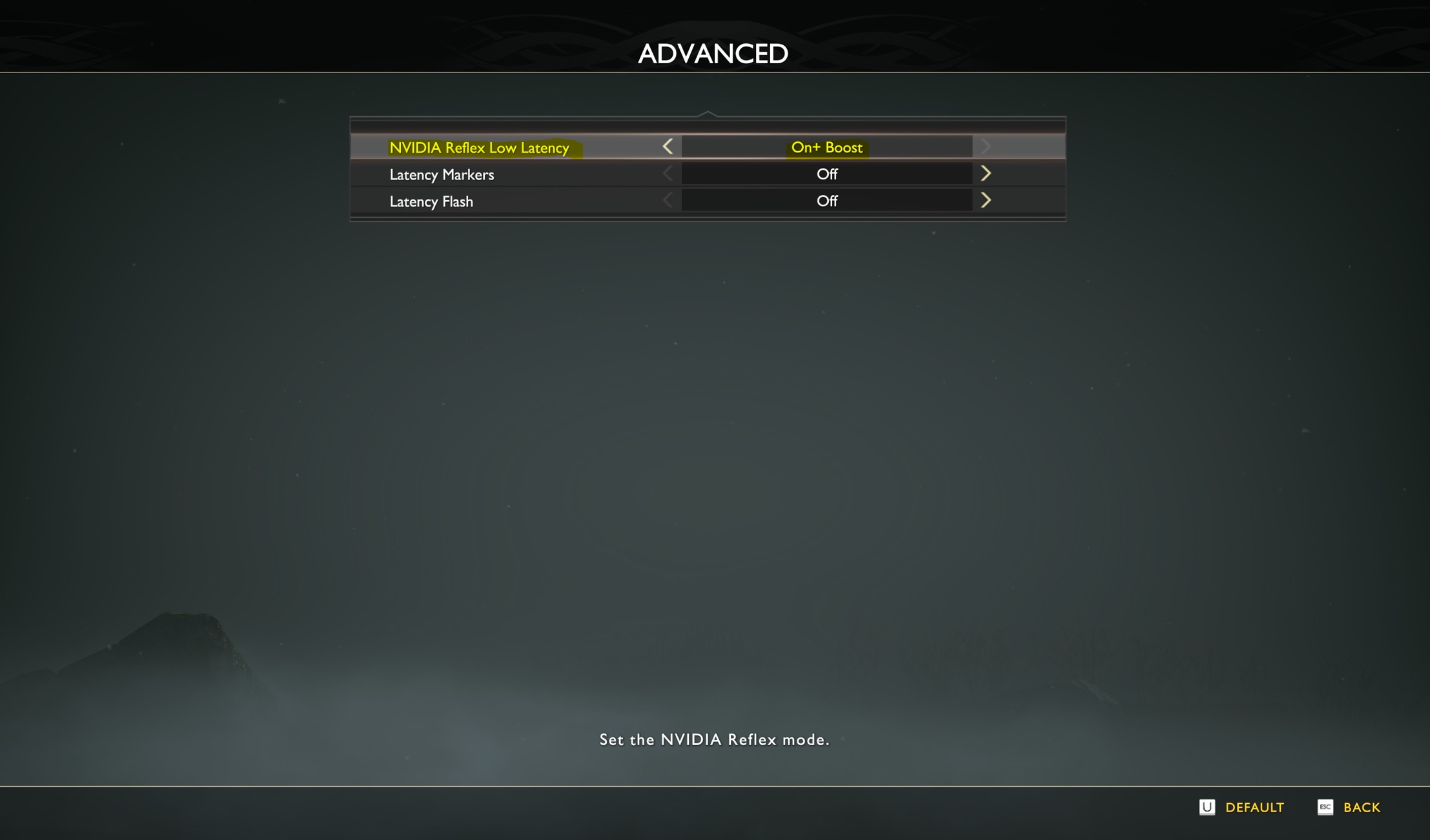 Not much here – Reflex only applies for NVIDIA GPUs this might be empty for AMD users. If AMD does have a similar feature, I recommend turning it on for improved latency or to do your own testing to see if there are any improvements. 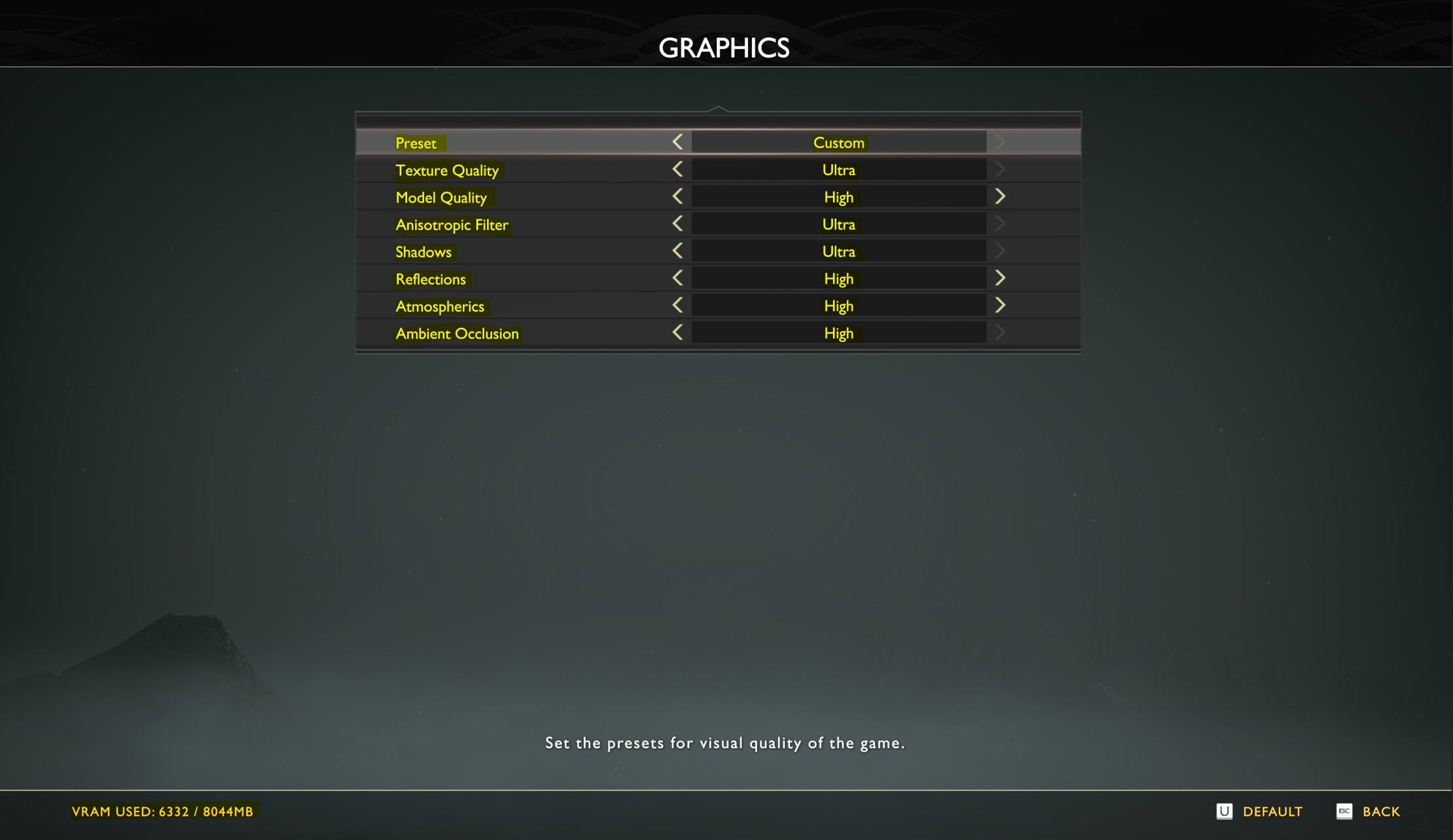 I hope you enjoy the Guide we share about God of War – Best Optimized Settings & Performance; if you think we forget to add or we should add more information, please let us know via commenting below! See you soon!