Where to find all 12 Treasure Maps in God of War


Near the Stone Falls to the northeast on the Lake of Nine, just north-east of Buri’s Storeroom. There you will find a map in a puddle near a broken bridge in between two rocks next to two gates. If you’ve lowered the water a second time, you will need to dock at the Stone Falls and climb until you see the two gates and hang left. 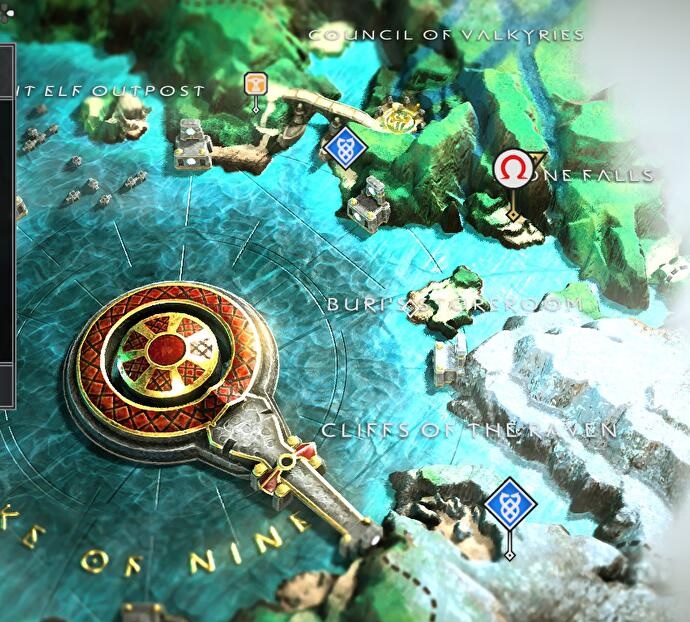 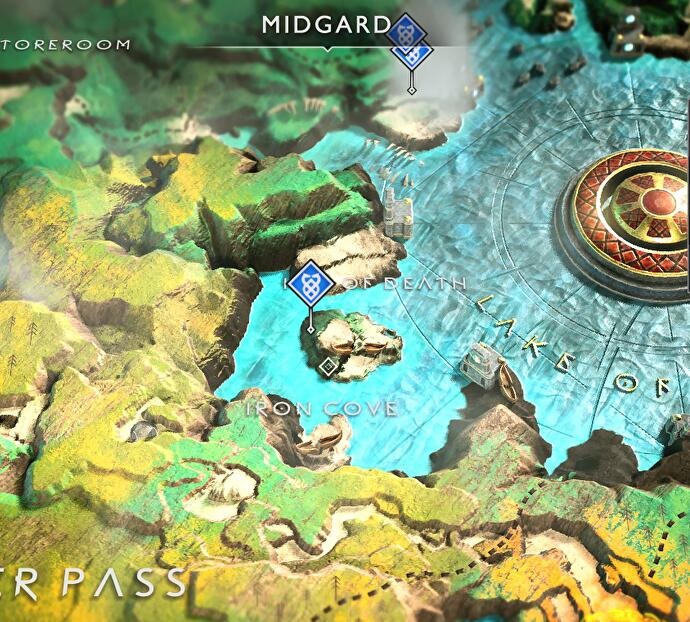 
In the Witch’s House, ensure you’re at a point in the story where you have unlocked the Shock Arrows and once again let the World Serpent lower the water again. Then, you’ll be able to see the light arrows towards a Nornir Chest underneath the Witch’s Cave. There, you can blow up a barrier with the arrows and go into the now open room to obtain the map. 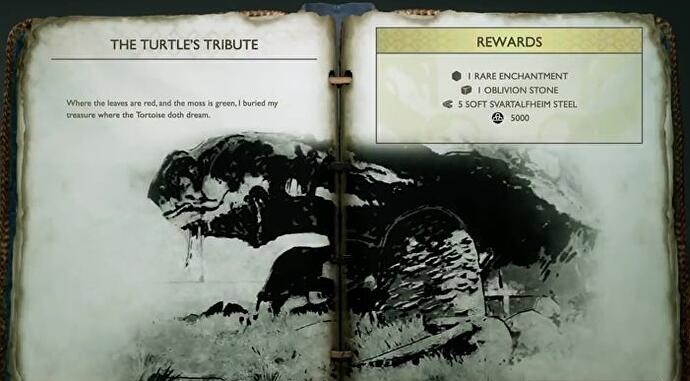 
Go over and up the well under front underneath the house to the front of the Witch’s house, go towards the massive Turtle and you’ll be able to find the digging spot near the Turtle’s Head. This one is super easy, and only takes a few minutes. You’ll gain 5000 Hacksilver, 5 Soft Svartalfheim Steel, an Oblivion Stone and an enchantment. 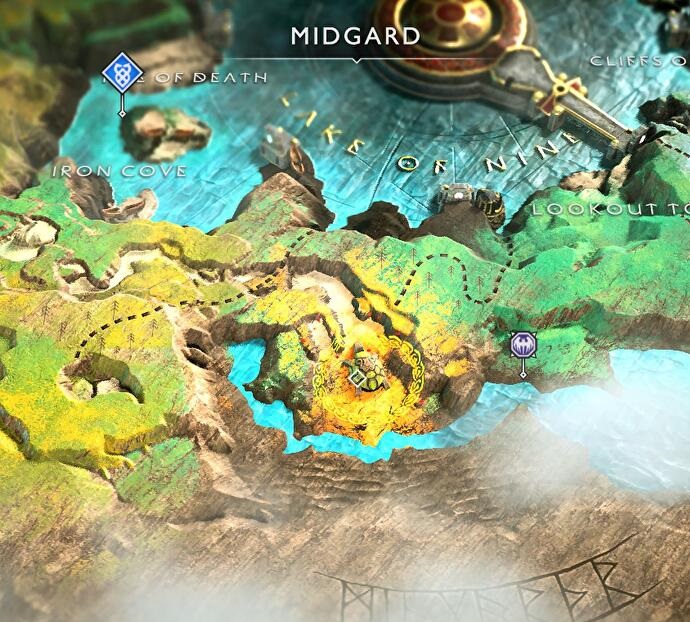 
You might want to undertake the Fafnir Sidequest, which will lead you to the greedy Dwarf’s Storeroom, in the middle of the rotating temple, you’ll find the map, this one is pretty hard to miss, and easy to pick up when you’re doing the quest. 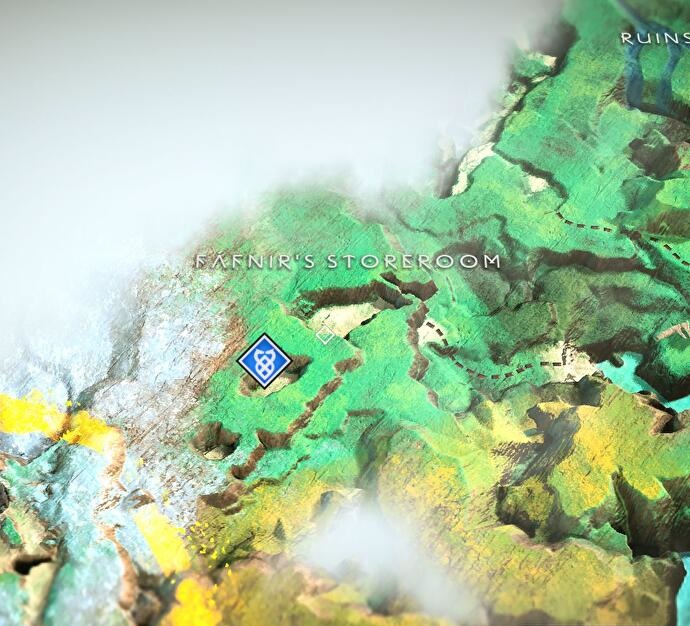 
Remember that huge ominous face on the side of the Mountain? Yeah, go there again. Underneath the face before a staircase, you’ll find the digging spot to get 6000 Hacksilver. a Legendary Enchantment, a Glacial Catalyst and 2 Solid Svartalfheim Steel. 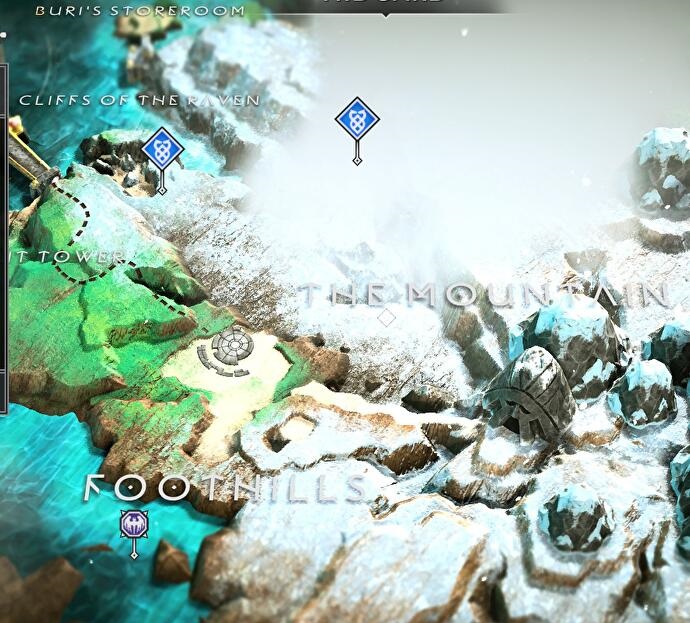 
Go towards the Ruins of the Ancient in the River towards the north, and before the gate to the big Ancient, you’ll be able to find the map. 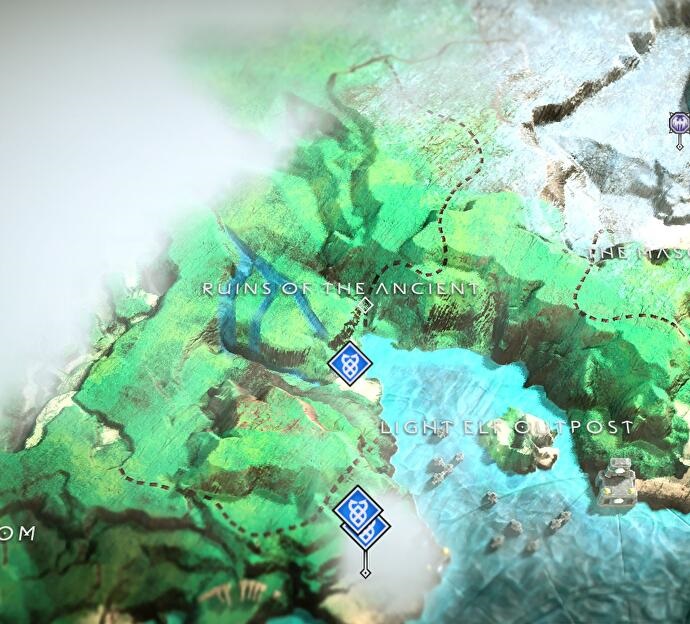 
Head towards Fafnir’s Storeroom once more, and near the entrance near two Goat Statues, you’ll be able to find the treasure very easily, you’ll get 5000 Hacksilver, an Eternal Frost, 30 Aegir’s Gold, and an Enchantment. 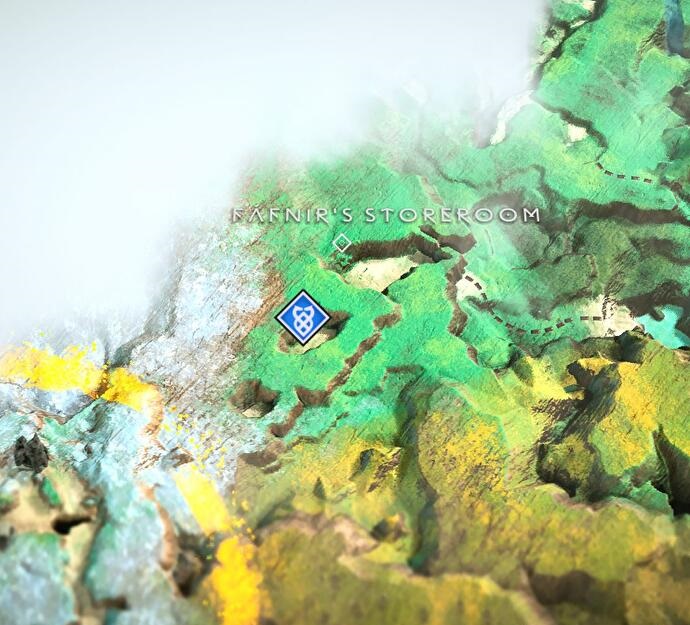 
Go into the Forgotten Caverns towards the east of the map, ensuring that you’ve lowered the water again thanks to the serpent, and you will be able to find it beyond a climbing path that the game directs you towards, just hidden in an alcove to the left, just keep an eye out and you’ll find it with no problem. 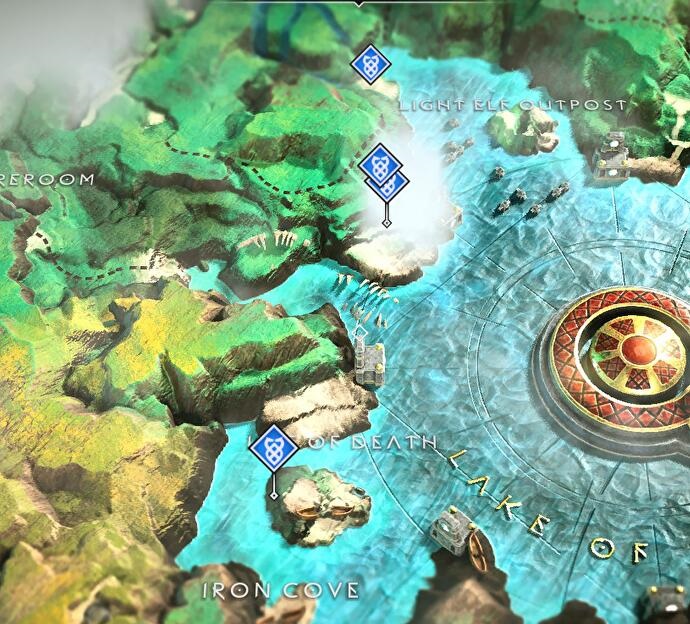 
Make sure you’ve picked up the ‘Family Business’ sidequest to gain access to the Northri Stronghold, and from there you’ll want to head over to the Water Wheel, before a ledge, turn around to find a wall that you’ll be able to climb and reach the treasure to gather 10000 Hacksilver, 10 Serpent Scales, an enchantment and an Unyielding Cylinder. 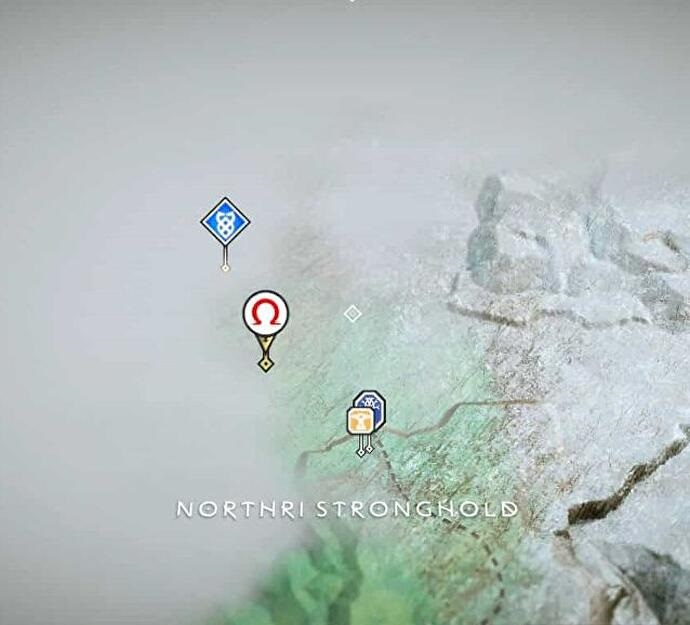 
Over on the Iron Cove, make sure you’ve taken out the Ancient and all the other enemies in the area and move along the path. To the left is the treasure map. 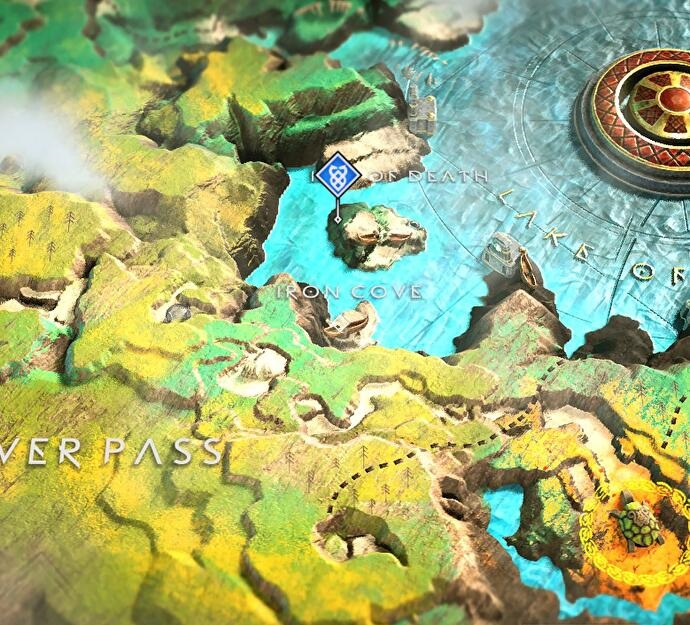 
You’ll be able to find the treasure over at Buri’s Storeroom, underneath the gate on the back of the island. Head left from here to a small pile of rocks to uncover 6000 Hacksilver, an Eternal Frost, an enchantment, 5 Aegir’s Gold and 7 Serpent Fragments. 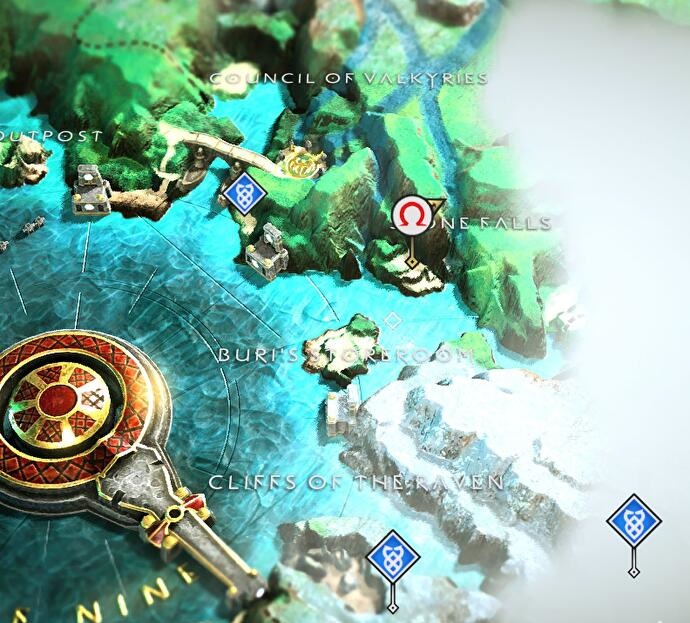 
Ensure you’re following Brok’s Favours, and pick up “Deus Ex Malachite” to pick up this favour, which gives you access to the Landsuther Mines. From there, you’ll reach a giant waterfall in the area, to the left you’ll see an elevator taking you down, where the map lies. 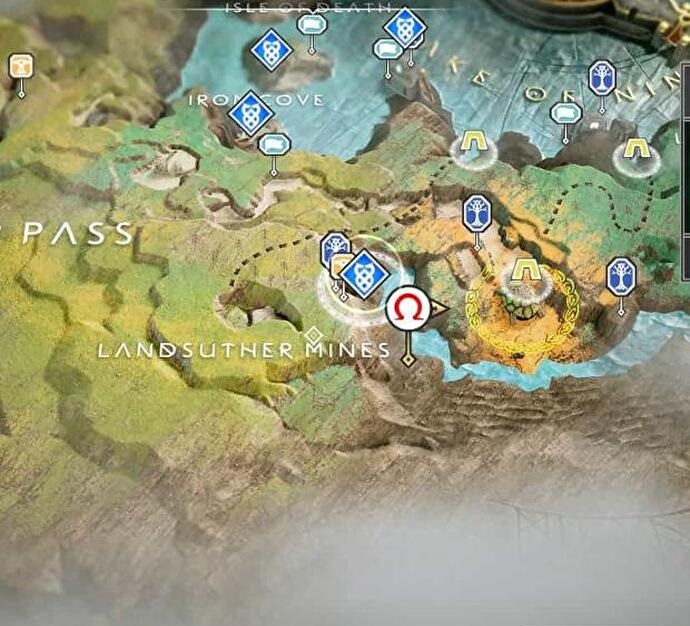 
The hint is in the name with this one. In the Lake next to the statue of Thor. You’ll be able to get to the treasure by going to the top of Musphelheim Tower and turning around, going back and climbing down to get to the foot of Thor, from here head to the tip of the area to find an enchantment, an Unstable Ore, 3 Hardened Svartfalheim Steel and 20000 Hacksilver. 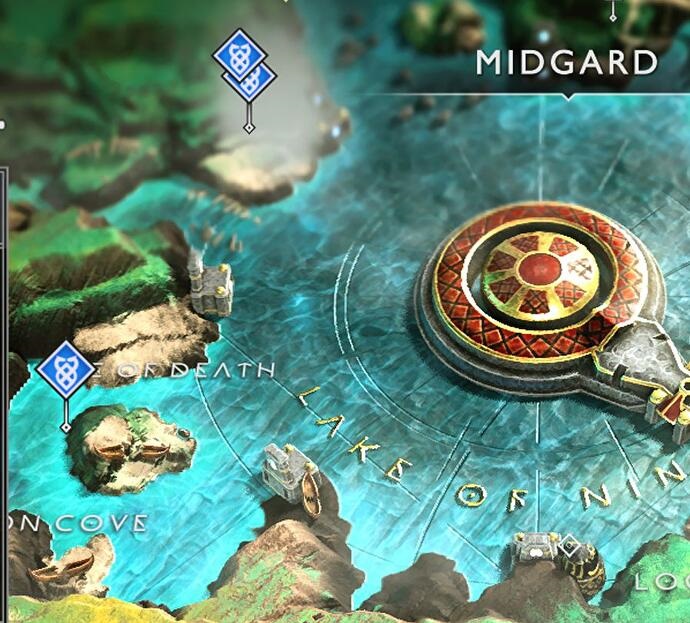 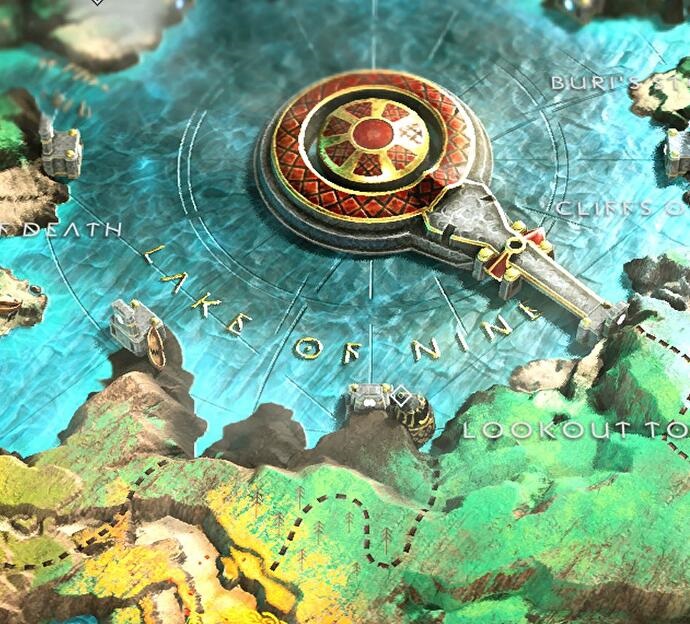 
Over on the beach of Alfheim Tower, you will be able to find this map on the beach next to the tower’s entrance, it’s very hard to miss! 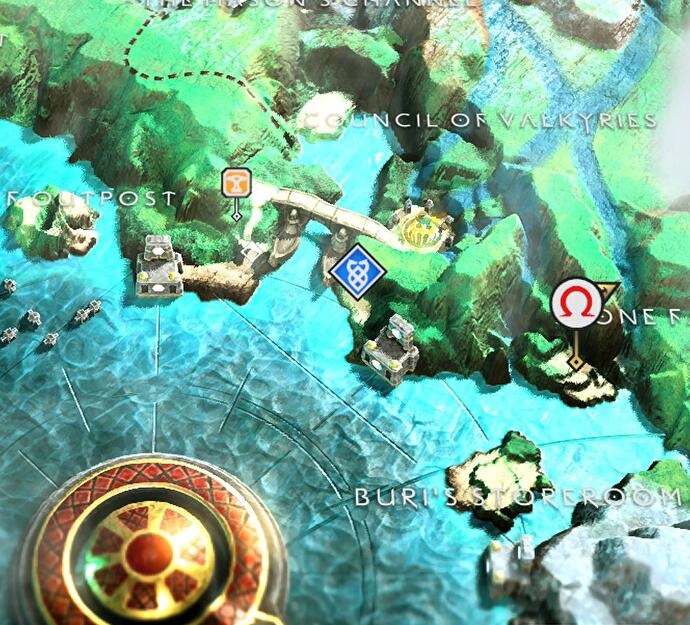 
Go over to the Light Elf Outpost once you’ve lowered the water again, and head towards the uppermost point of the outpost and the treasure of an enchantment, Unyielding Cylinder, 7 Aegir’s Gold and 7 Serpent Fragments will be yours. 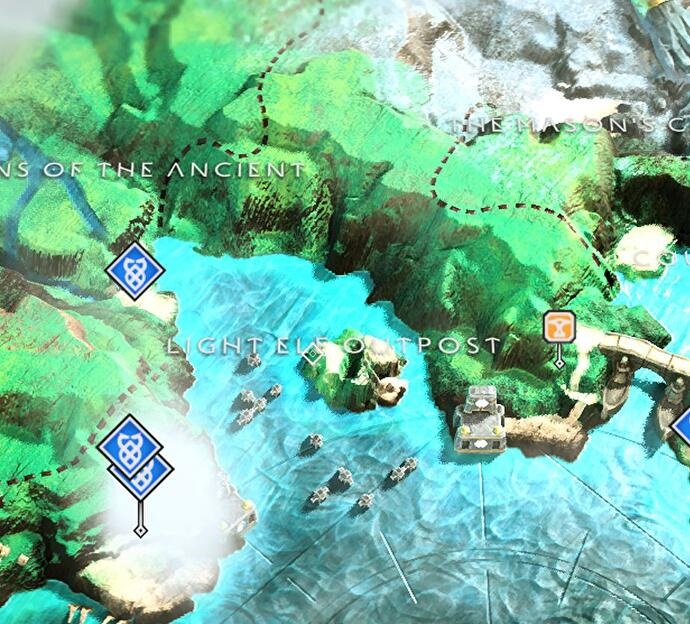 
Once again we will be venturing into the Northri Stronghold, so make sure you’ve picked up Brok’s Favour. Over at the Reaver ship, you’ll want to head over to the deck, then go over to the side and hop off, then find a hole to get into the hold within the ship again to get this treasure map 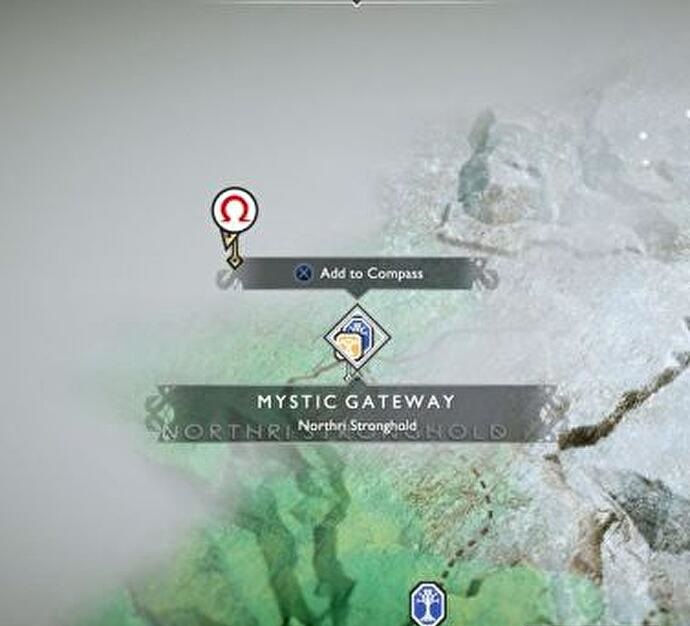 
On the way to the Mason’s Channel, you’ll want to go west to leave the boat, and head up towards the statues. Near the top, go right past a tunnel to find a ledge overlooking the two Oarsmen. Here you’ll be able to find the treasure and gain an enchantment, a Glacial Catalyst, 10 Serpent Scales and 20000 Hacksilver. 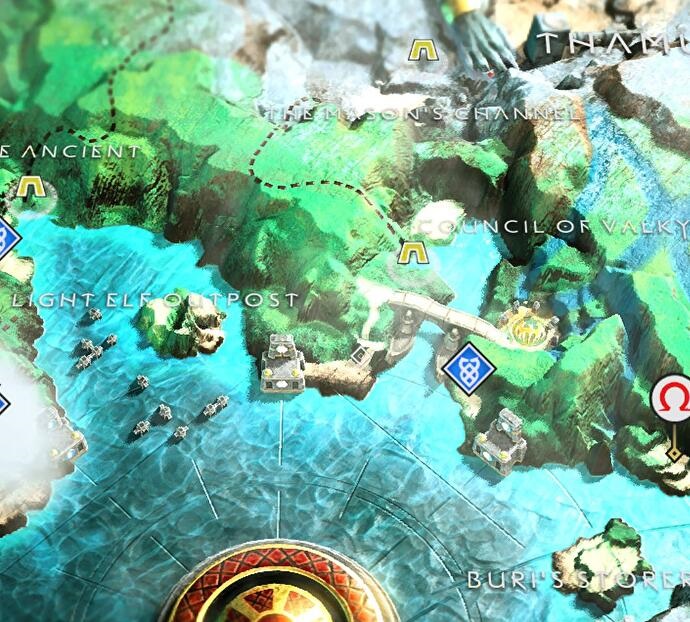 Head towards the Mountain in Midgard, and then head towards the big elevator claw, where you can now find an elevator. Go to the top and head north past explosive crystals and a staircase. Head right from here to get to the map. 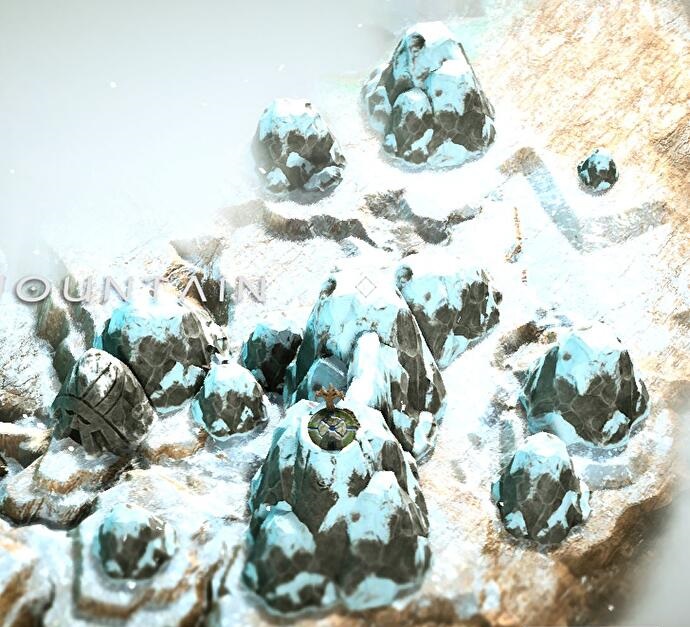 
Go to the Council of Valkyries, and head inside towards eight thrones. From the huge faces in the mountain, go left to find the treasure of an enchantment, Unstable Ore, 5 Tempered Svartalfheim Steel and 10000 Hacksilver. 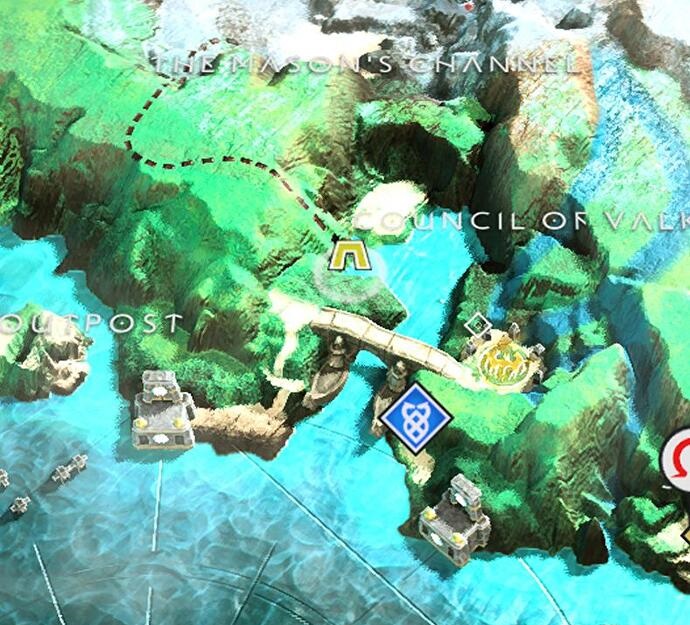 
Ensure you’ve picked up the sidequest ‘Secondhand Soul’ from Brok and then go over to the Volunder Mines. After fighting some baddies, continue on the path until you encounter a fork. From the fork go right and you’ll be able to find the map. 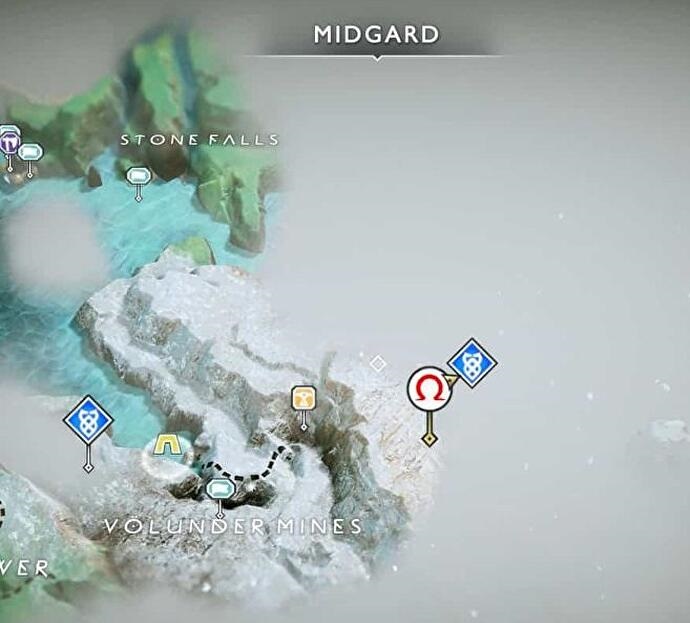 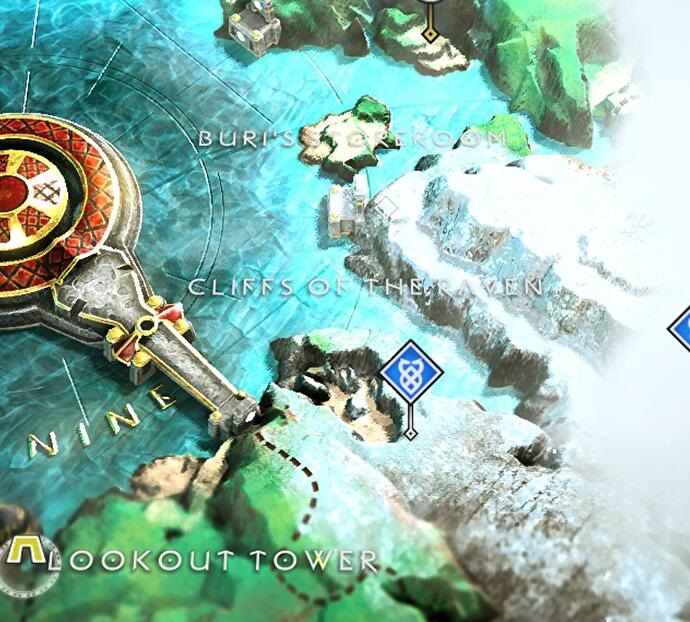 
Over on Lookout Tower, you’ll see a small island with spikes out of the sand, with a Nornir Chest nearby. The map is on this island and very hard to miss. 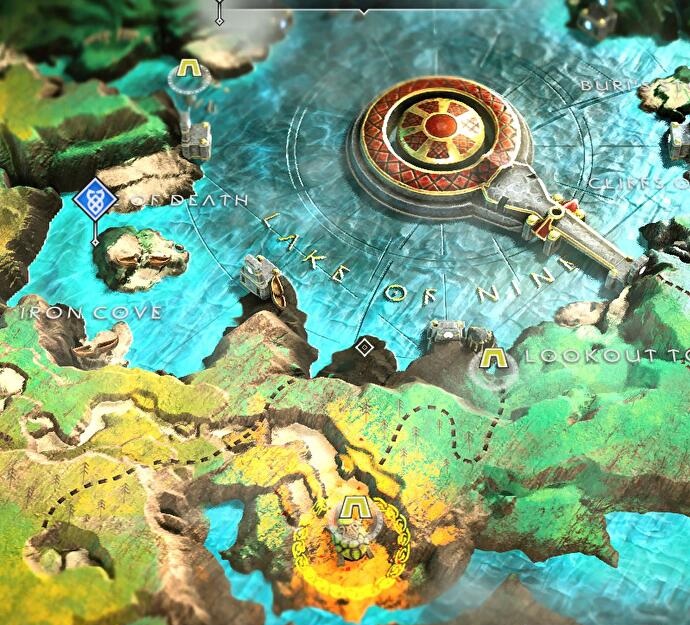 
Near the Giant door towards the south west of Veithurgard, you’ll be able to find the treasure next to a statue,which rewards you with an enchantment, a leiptir allow, 5 solid Svartfalheim Steel and 6000 Hacksilver. 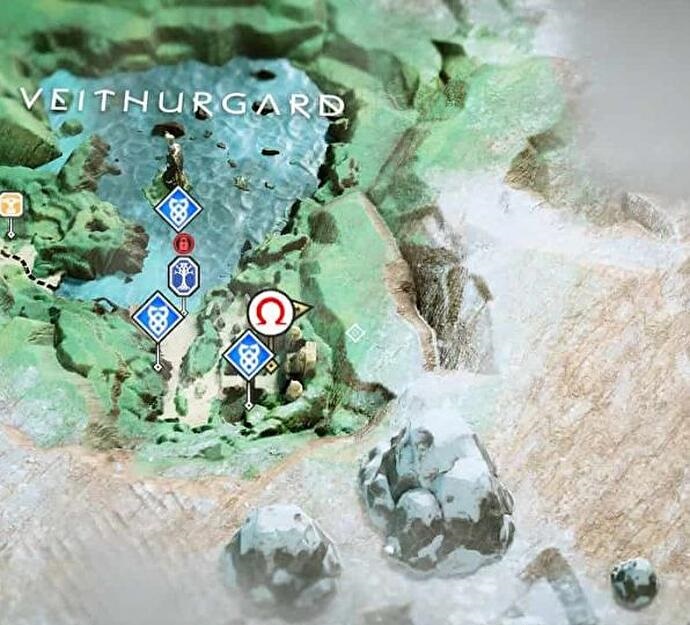 Thank you for reading this guide, I hope it was useful, I’d be happy if you’d take a moment to leave a like, favorite, and maybe an award.

This is all about God of War – All 12 Treasure Maps & Location; I hope you enjoy reading the Guide! If you feel like we should add more information or we forget/mistake, please let us know via commenting below, and thanks! See you soon!