Where are all the Forza Horizon 5 house locations? If you want to own the sandbox racer’s impressive array of villas, estates, and even castles, you’ll have to progress through the campaign; Completing certain racers and Horizon Adventure missions will make houses appear on the game’s colossal map of Mexico. Once these icons appear, drive to it and you can buy it for a set number of credits.

To get you started, Forza Horizon 5 gifts you property near the start of the campaign. Not only do they act as Forza Horizon 5 fast travel locations, but certain pads reward you with perks, such as Skill Songs and free Wheelspins. While the most expensive of the seven costs an eye-watering 5,000,000 CR, a couple of these map-hopping homes can be picked up for free if you own the Forza VIP DLC. Follow the map and tips below to find every house in Forza Horizon 5.

Why do you need houses in Forza Horizon 5?

How do I unlock houses in Forza Horizon 5?

All houses, except for the very first (starting) one, which is issued after the prologue, must be opened. Almost all of them also need to be purchased with in-game currency. Houses open gradually as you progress expeditions during the campaign.

Expeditions are a new kind of story quest that acts as an introductory event for each new type of adventure.

Expeditions have a number of tasks (both required and not) that must be completed in order to eventually create a new outpost at the Horizon Festival. Each outpost is different from the previous one and opens up a new type of races.

As soon as the expedition is over, you will receive a notification about the appearance of one of the game houses. Which of the six new houses will appear depends on the type of the completed expedition. All seven shouldn’t take more than two to three hours to open.

Below you can find a map for all the houses you can buy or are gifted in the game, and below are more specific directions. 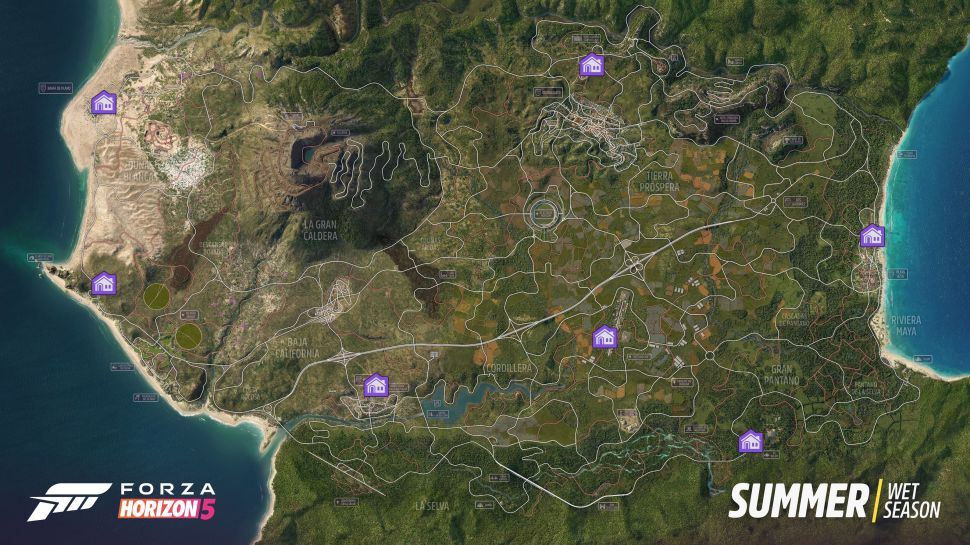 With so many houses to find and obtain, collecting them all can be a daunting task. Here’s what you need to know about the Player Houses in Forza Horizon 5. 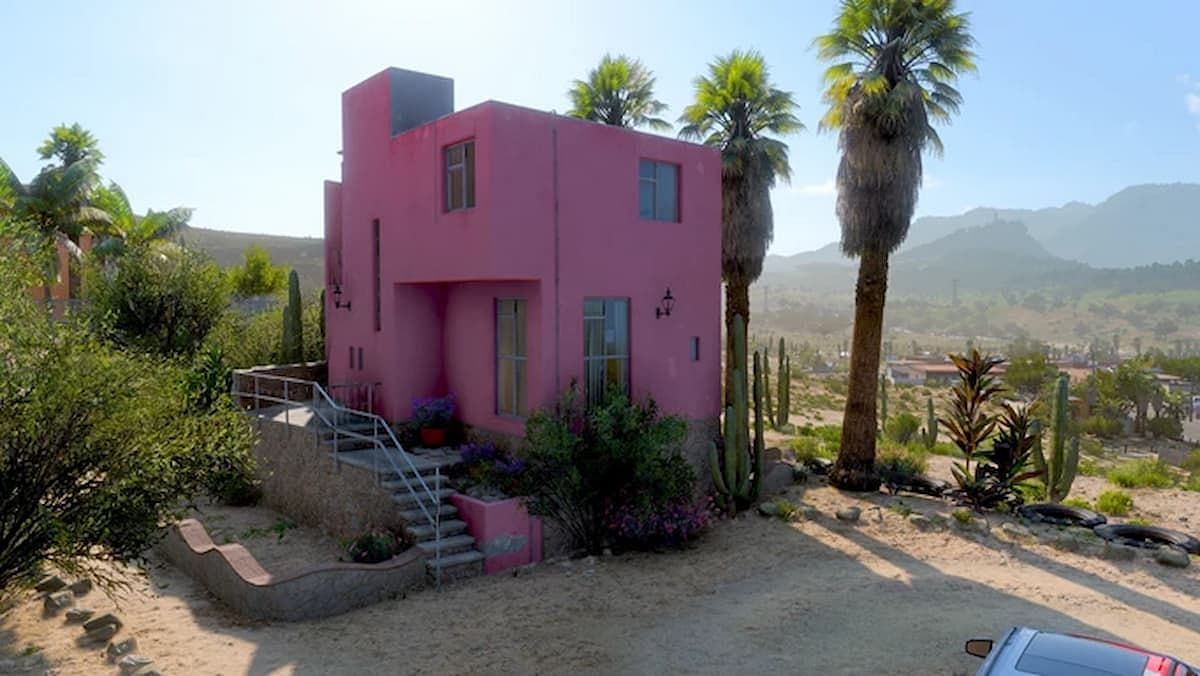 Every player will be gifted one Player House at some point during the beginning of the game, and it’s the turning point beyond which players typically have complete unfettered access to the world and its campaign. The house, known as “Casa Bella,” is an adorable and modest affair featuring a bright pastel pink color and an incredibly charming boxy design. 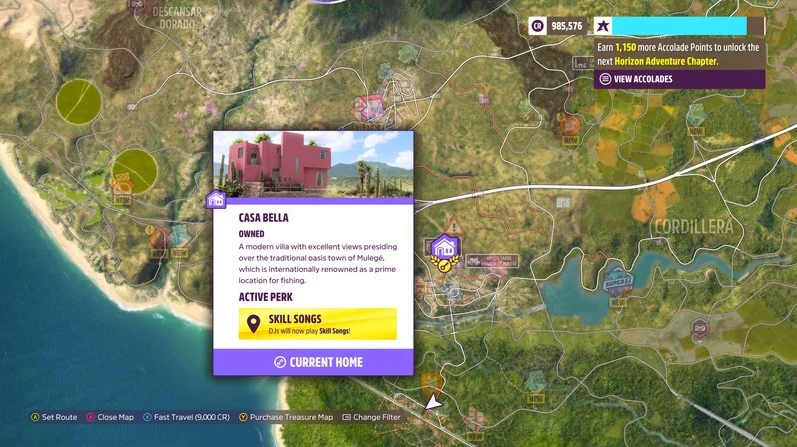 The house is located in the town of Mulegé, and is pretty easy to find. Fortunately, you won’t have to look too hard to find it. Once you reach the first Horizon Adventure chapter, which happens after you complete the first Showdown and complete some Accolades (for finishing races, taking pictures, exploring, and more), Ramiro will invite you to Mulegé to begin the next chapter of your journey.

La Casa Solariega is a beautiful mansion, complete with an ornate fountain set in the middle a rotund driveway. This house is understandably quite expensive, coming in at 1.5 million Credits, but players can get their hands on this house for free as part of the Forza Horizon 5 VIP Membership DLC.

You don’t have to do anything to make this house appear on your map, as it’ll appear automatically after unlocking the Horizon Adventure and obtaining the start Casa Bella home. 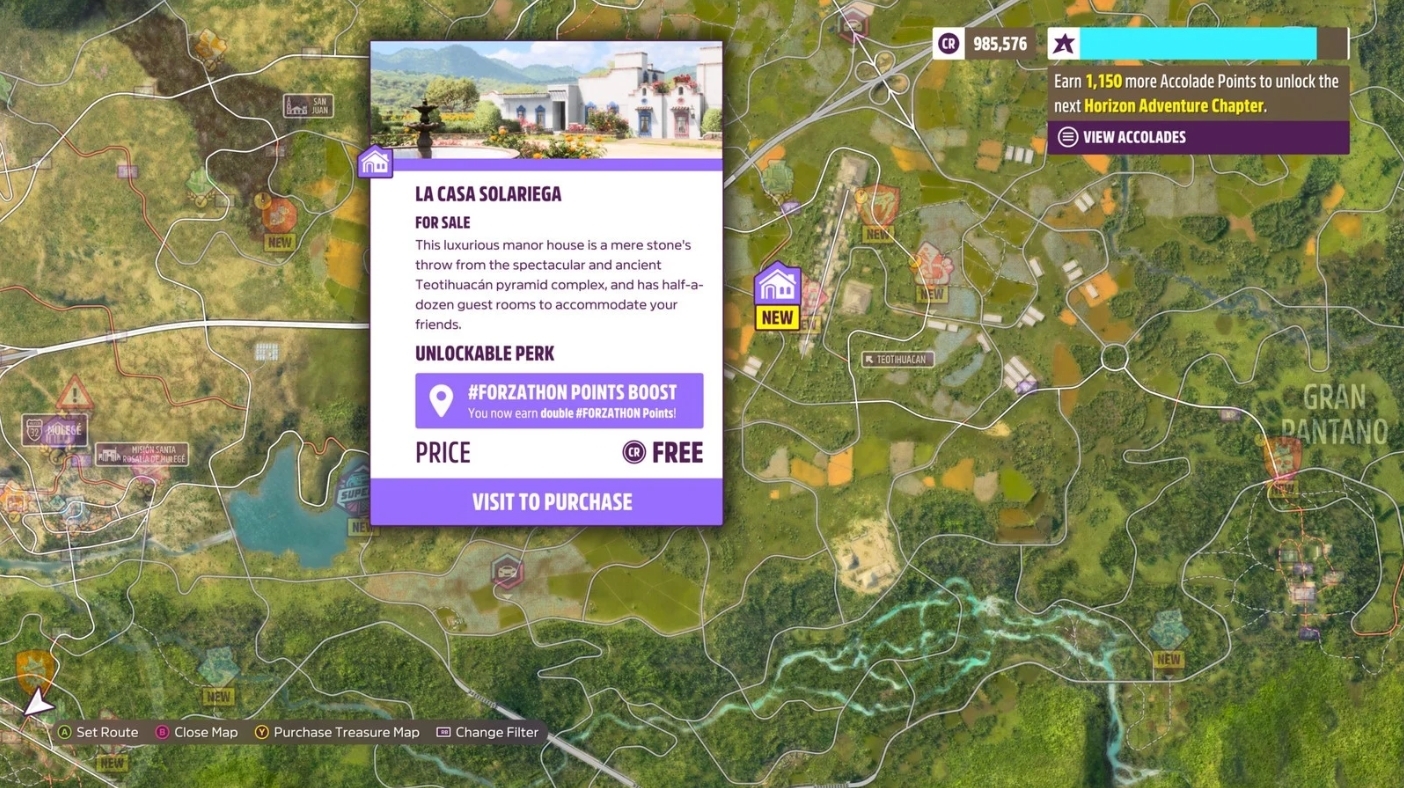 The perks included with La Casa Solariega grant you double Forzathon Points, a useful bonus when playing through the Festival Playlist. Forzathon Points are granted when you complete Horizon Arcade events, or Weekly and Daily Challenges, and can be spent at the Forzathon shop for rare cars and other rewards. On top of this, La Casa Solariega also includes five Super Wheelspins and the valuable “Green Crown” cosmetic item.

Lugar Tranquilo is the second DLC house in FH5, and comes as part of the Forza Horizon 5 Welcome Pack DLC. Just like with La Casa Solariega, you can also purchase Lugar Tranquilo flat out if you don’t want to pick up the DLC, but it’ll cost you a pretty penny.

Sharing another similarity with La Casa Solariega, Lugar Tranquilo doesn’t require anything special to become available for purchase. After you obtain Casa Bella, the house will automatically appear on the East coast, near the town of Playa Azul. 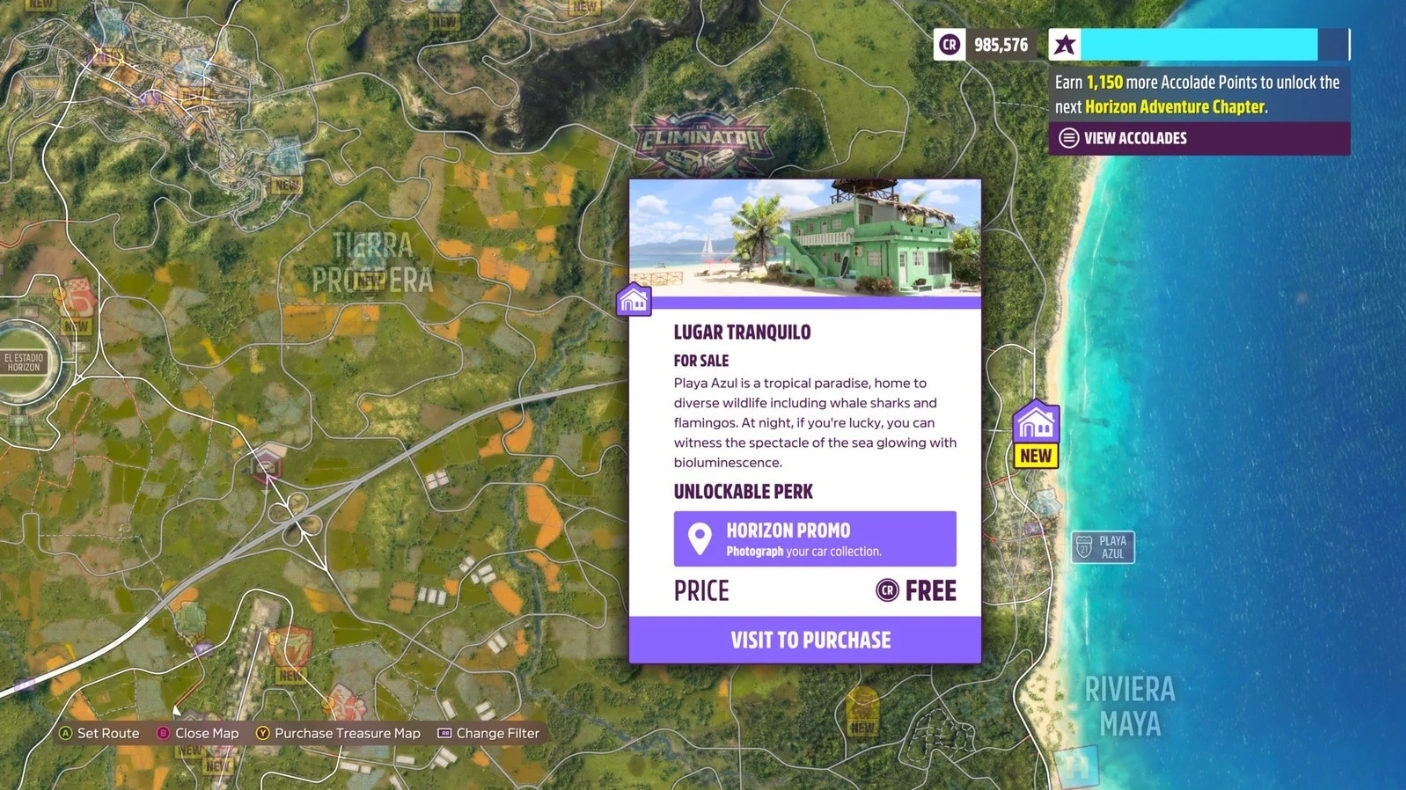 Of course, Lugar Tranquilo includes some additional perks to sweeten the pot. Players will earn a free Super Wheelspin and a new Forza LINK phrase, but the most interesting perk by far is unlocking Horizon Promo.

Horizon Promo is already semi-available before purchasing Lugar Tranquilo, in that the game still keeps track of vehicles you’ve photographed, but fully unlocking it makes it easier to keep track of which cars you’ve photographed in your collection (and makes it quicker to do so in the first place). It also gives you rewards for different milestones, incentivizing players to head into Photo Mode any time they pick up a new ride.

Buena Esperanza, an environmentally friendly abode that is nestled deep in the Mexican jungle, with the ancient ruins of Ek’ Balam peeking out over the cliff edge. This house is quite charming, even if it is situated in an out-of-the-way location that makes it a little frustrating to reach. Being a mid-sized home, Buena Esperanza will set players back 700,000 Credits, and does need to be purchased. 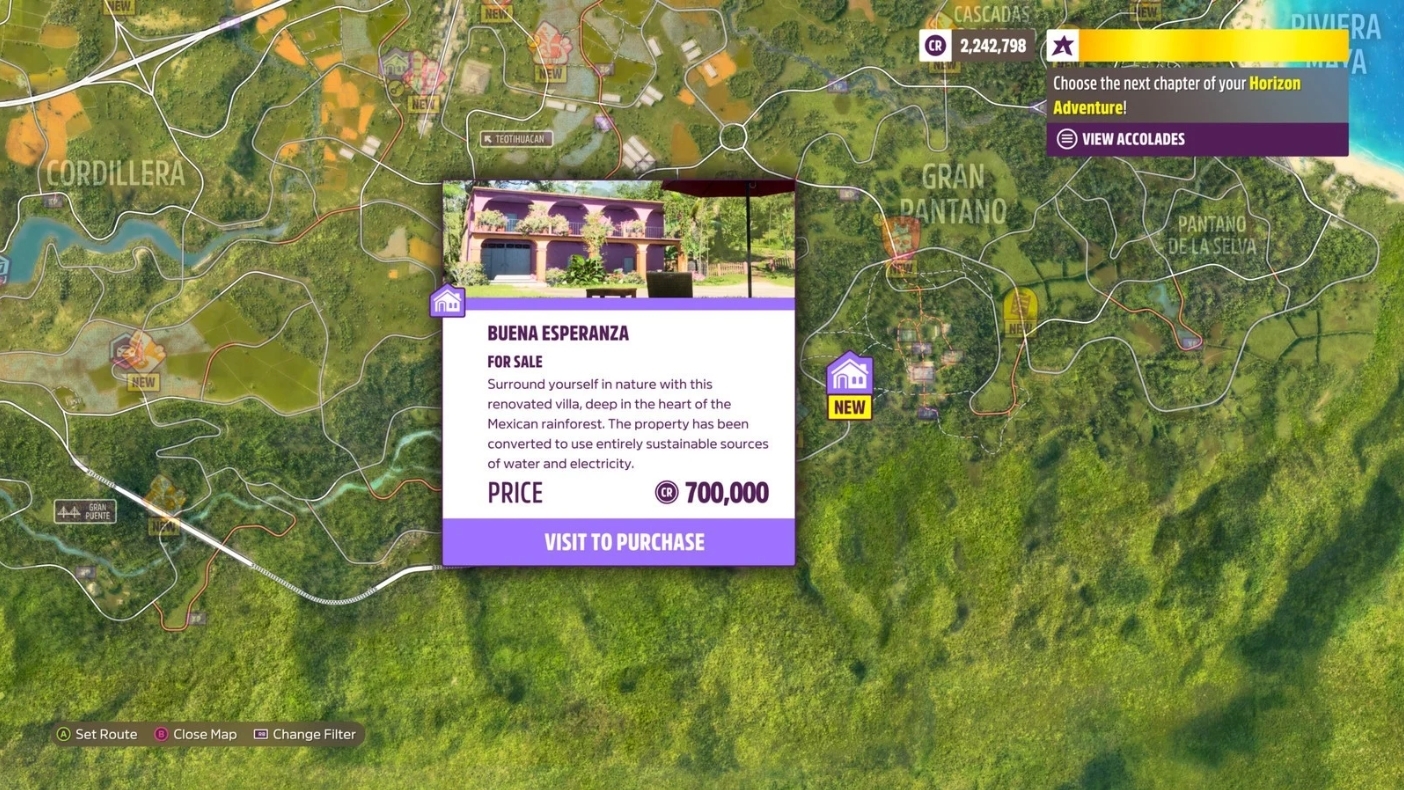 Buena Esperanza doesn’t include any long-lasting perks like the previous houses I’ve mentioned, but it does gift you an incredibly rare car (the 1985 Porsche 959 #185 Prodrive Rally Raid), a Super Wheelspin, and the rather comical Chicken Suit cosmetic item.

Location: near the beaches of Dunas Blancas

La Cabaña is a must-have for any Forza Horizon 5 car collectors, because its unassuming appearance and low asking price actually contain a Barn Find rumor that can’t be obtained any other way. La Cabaña is by far the most affordable house available to purchase in Forza Horizon 5, coming in at only 150,000 Credits, but it does need to be purchased. 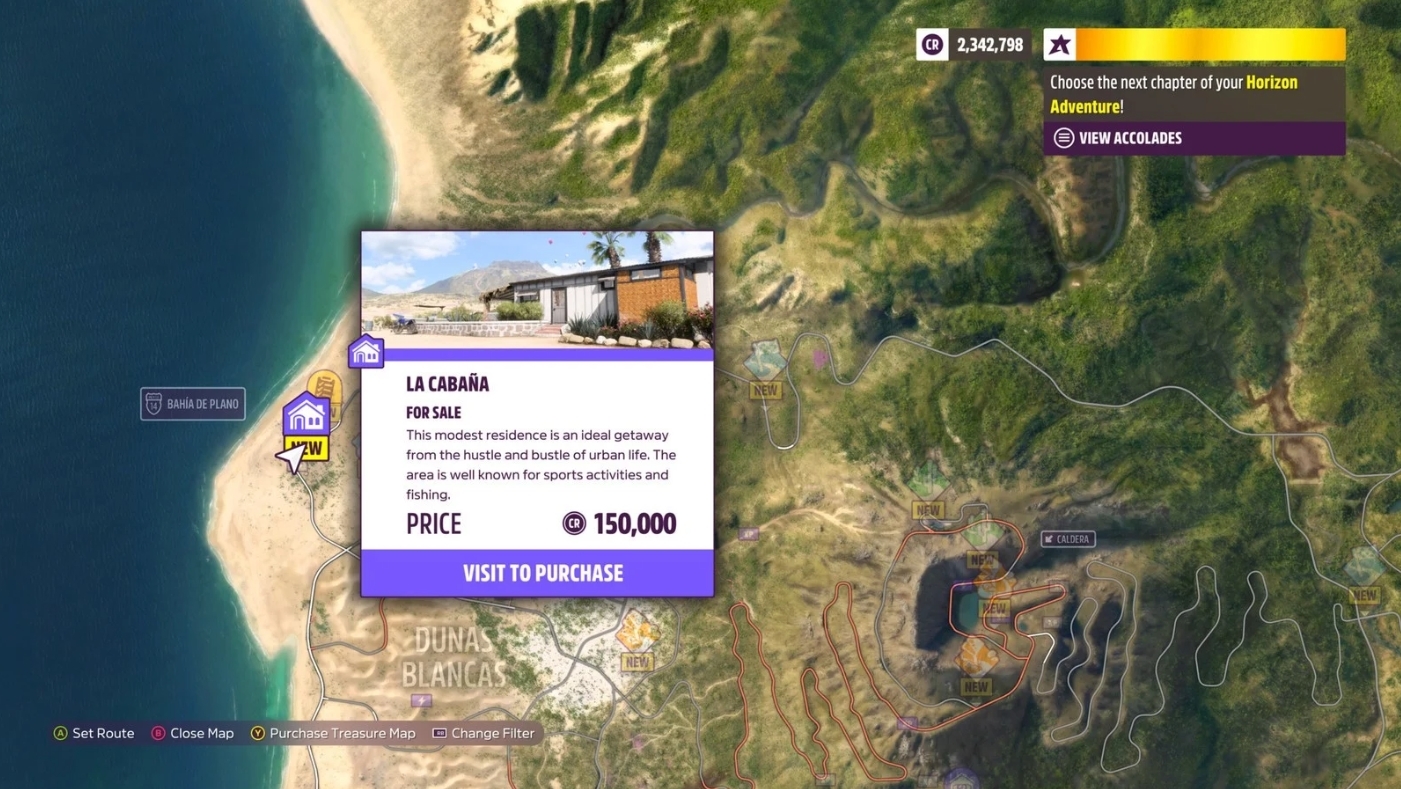 La Cabaña is actually the source of the 1968 Renault 4L Export Barn Find rumor, a valuable get that will more than make up for the purchase price for many players.

Buenas Vistas is the second most expensive property in Forza Horizon 5, and it certainly looks the part. Buenas Vistas runs for 2 million Credits, a hefty price tag that is justified by its extremely powerful perk. 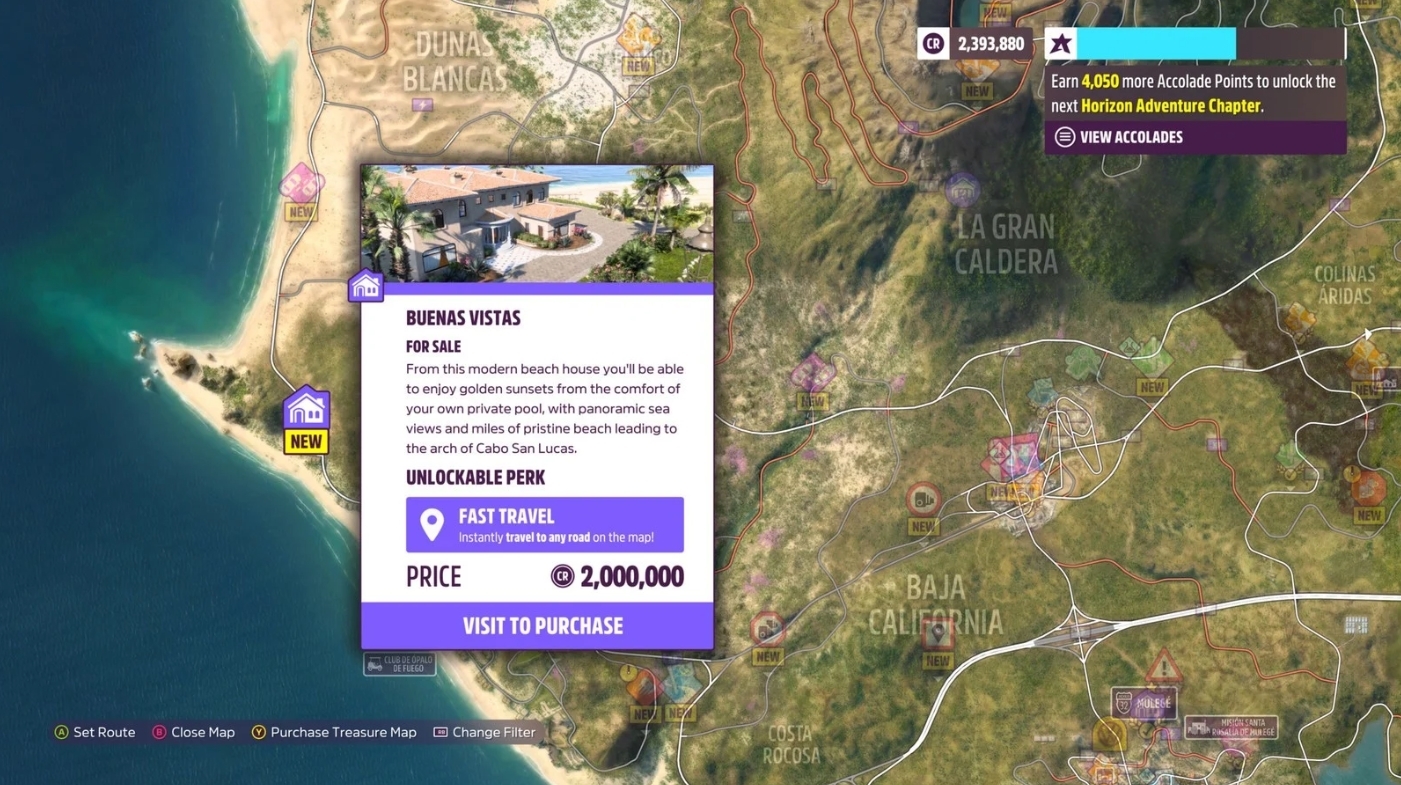 Players who purchase Buenas Vistas gain the ability to fast travel to any road on the map instantly, letting players go pretty much anywhere they please without any wait times. You’ll still be restricted by fast travel costs, which are reduced (and ultimately eliminated) by fast travel Bonus Boards, but those splashing the cash for Buenas Vistas probably won’t be too concerned by fast travel prices in the first place.

The final property in Forza Horizon 5 is none other than Hotel Castillo, a stunning and expansive mansion that boasts of huge grounds and (apparently) always-on-site staff. This is for the players with Credits to burn and a desire to show off their accumulated wealth, as Hotel Castillo is also by far the most expensive Player House in FH5. With a price tag asking for a cool 5 million Credits, it’s not a simple affair to pick up the keys to Hotel Castillo. 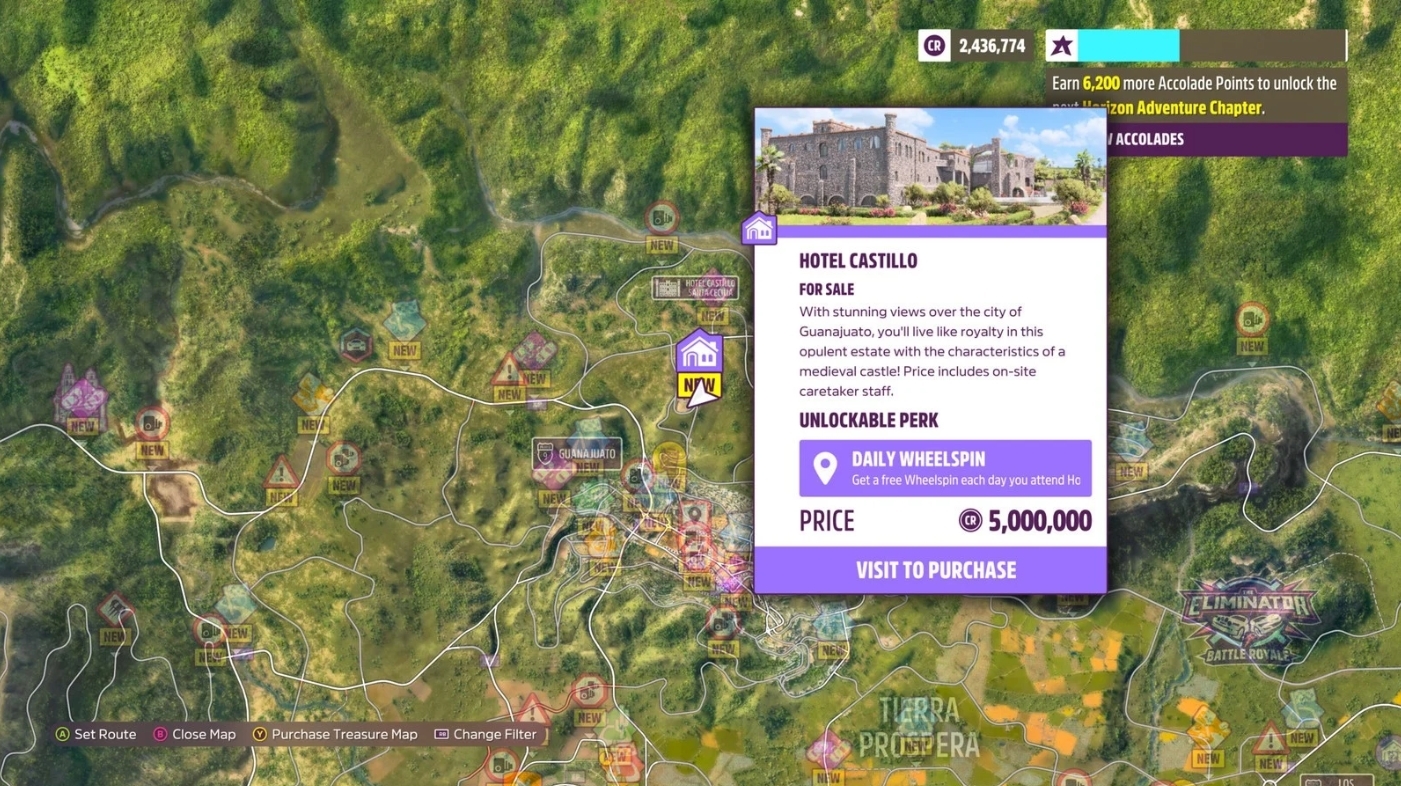 Hotel Castillo actually doesn’t include the most lucrative perks, certainly not becoming of its monstrous price tag, but there are still niceties for the players willing to lay down the cash.

After unlocking and purchasing each of the seven houses listed on the list, the player will unlock many fast travel points, as well as earn the achievement “Tycoon”, which gives 30 points.

This is all about Forza Horizon 5 – All Player Houses Location + How to Unlock Houses; I hope you enjoy reading the Guide! If you feel like we should add more information or we forget/mistake, please let us know via commenting below, and thanks! See you soon!