This is a warrior guide to obtain the hardcore achievement. Many people have done or made a magic guide already so this is a guide just for how you can obtain it as a warrior. While time consuming, you can achieve this with roughly 20 hours sinked into the game.

This is a warrior guide to obtain the hardcore achievement. Many people have done or made a magic guide already so this is a guide just for how you can obtain it as a warrior. While time consuming, you can achieve this with roughly 20 hours sinked into the game. 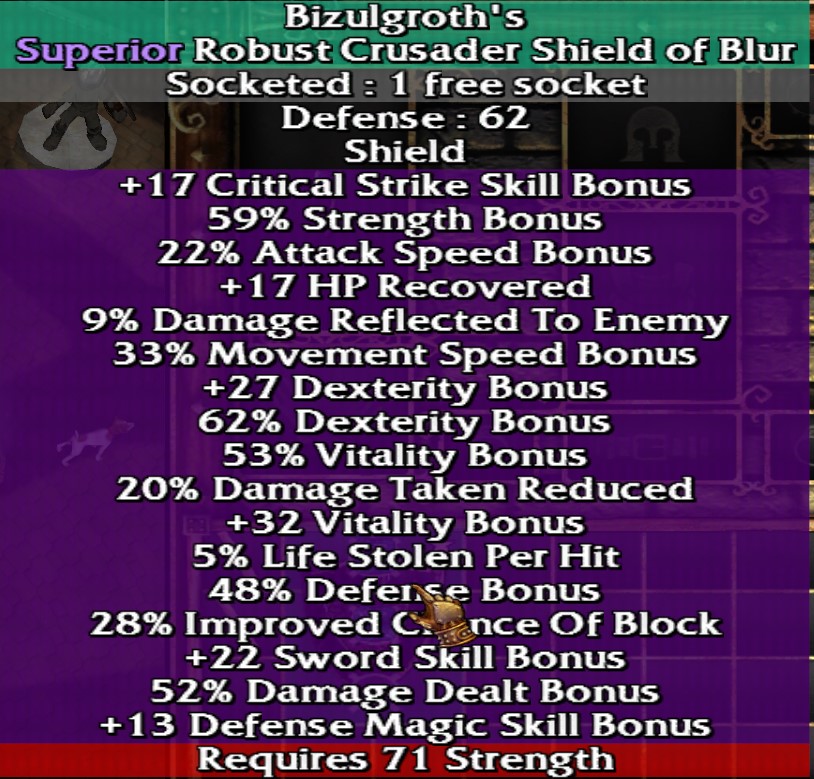 TIP: Enchanting: To enchant properly to make gear for yourself and to sell, you will need utilize a trick. When you enchant and you obtain an enchantment that you don’t want, simply close the game with either ALT + F4 or more simply, close the game in the steam window. Restart the game and you won’t have that enchantment anymore and your GP will be saved. Continue to do this until the desired result that you wish for. Once you get an enchantment that you want, Save and exit the game. Re enter your file and continue to enchant. I have put a screenshot to show what kind of gear you are looking to make and what type of gear you can make. Enchanting stats is dependent on dungeon level.


TIP: Prying gems: You can use the closing game trick on any statue to pry gems. It should be known that when you pry gems out of these statues, you can obtain legendary gems and that is what you should aim to obtain. You can get at least 2 legendary gems that will help you in your game at any part of the game.


TIP: Many pet transformations will work. I used scorpfeline for my run but make use of what you can and upgrade as needed.


TIP: Early – mid game, you will use a lot of potions. Don’t bother with magic skills.


This is the hardest part of the game. Start out by clearing the first level of the dungeon in either town until you get 200 gold. You can do this by using your pet to kill the monsters and picking up the gold and equipment that is lying around. After you get 200 gold, go and fish in town to obtain a better pet transformation to help you clear the first and second level of the dungeon. Continue to fish to obtain legendary gear to sell until you gain about 50 000 GP or more. If you get one piece of legendary gear, it should be enough for you to start enchanting. Enchanting is the most time consuming part of this guide, since it’ll be what you use mainly to clear. Enchant after you clear the 2nd level of a dungeon. Buy cheap ordinary gear ~5000 GP or less and enchant until you get a profit that you want. As long as you get a profit you can obtain most enchantments and sell it for profit. I aimed for around 30 000 GP to sell for gear. Always keep your enchantments cheap early because GP amount is low. Once it reaches above 10 000 GP you should stop attempting to enchant. I used this method to make roughly 1 million GP and then made gear.


The mid game doesn’t change much from the early game. Make gear for your warrior. Use cheap gloves, shoes, armor, shield to make your gear to start. Rings and amulets are relatively static in their enchantment pricing, roughly 10 000 – 30 000, so I would make these as well if you have 1 million GP. Use any weapon you want. Swords are good but I would suggest using anything that is one-handed, so that you can use a shield. A shield is very useful in this mode since blocking will help stop you from taking damage. Stat wise, keep it relatively balanced with strength being slightly higher than DEX or VIT. Skill guide wise, put some into your weapon of choice, shield blocking skill and crit rate. Crit rate and block pretty much cap around 25-35% and the effects of skill point after which are minimal. I put most of my skill points into crit and block since most of your damage early will come from your gear. Put some points into a weapon skill but 10 points is enough early until you get a good enough crit and block. If you are keen enough, every trio of quests should be for each next level that you will attempt. This will get you your fame and gain some GP and experience. Before attempting a new level, gain a new set of quests for that level. Always keep a tome of town portal and identify with you. Alternate between the two regions when you are clearing levels. Do the same levels together. Make a lot of money by utilizing enchantments.


Enchantment stats to look for:

Attack % Bonus + (chances of you to hit your melee attacks)

Defense % Bonus + (chances of you to dodge)

Improved chances to block (if you get it, keep it, but not as important as the ones above. You get most of your blocking from the skill)


After you have cleared some levels, you should remake your early game gear. Enchanting is dependent on the level you delve into the dungeon. When you dive deeper, the better your enchantments will be. Also, you will need to upgrade your gear anyways to keep up with the monster level. Remake your gear when you reach about level 10. When remaking gear, continue to use cheap gear to enchant. You can slightly upgrade it but the better it is, the more costly it is to enchant. Remember to make some gear for your pet as well. Early – mid game, your pet has a lot of uses.

Good sellable gear will be available starting at level 20 of the dungeon. Pick up any gear that stands out and for sure any gear with the word “Elite” attached to it. These will help you make money. When you reach the level right before the Heroic quest of either region, make money through enchanting and make the rest of your gear. You should have a new set of gloves, boots, rings, amulet, helm, belt and armor at minimum. Make a decent shield to use. As for weapons, it will be the most expensive. Enchantments on the weapon is minimal. What matters most is the damage on the weapon. Obtain some enchantments on the weapon while it is cheap and once it is too expensive, then stop. If your enchantments are good enough at this time, it may be enough to defeat Kaos as well. If you are not clearing the Kaos dungeon semi easily at this time, you should remake your worst pieces of gear. After you defeat Kaos, retire and you are done!

Use enchanting to make money off cheap gear

Continue dungeon until minimum level 10 of dungeon or when comfortable

Start to create your end game gear. Be picky about what you want on your gear.

Finish your gear and then the game.


Hope this helps people trying to get this achievement!


Enchanting is the most time consuming aspect of this guide.

This is all about FATE: Undiscovered Realms – Warrior Build – Character Info Guide; I hope you enjoy reading the Guide! If you feel like we should add more information or we forget/mistake, please let us know via commenting below, and thanks! See you soon!