Complete guide with all bobblehead available in the game.


Location: The Agility bobblehead can be found at the wreck of the FMS Northern Star. It is past the top room at the bow of the ship. There are two planks at the one to the right. It will be at the tip of these planks. 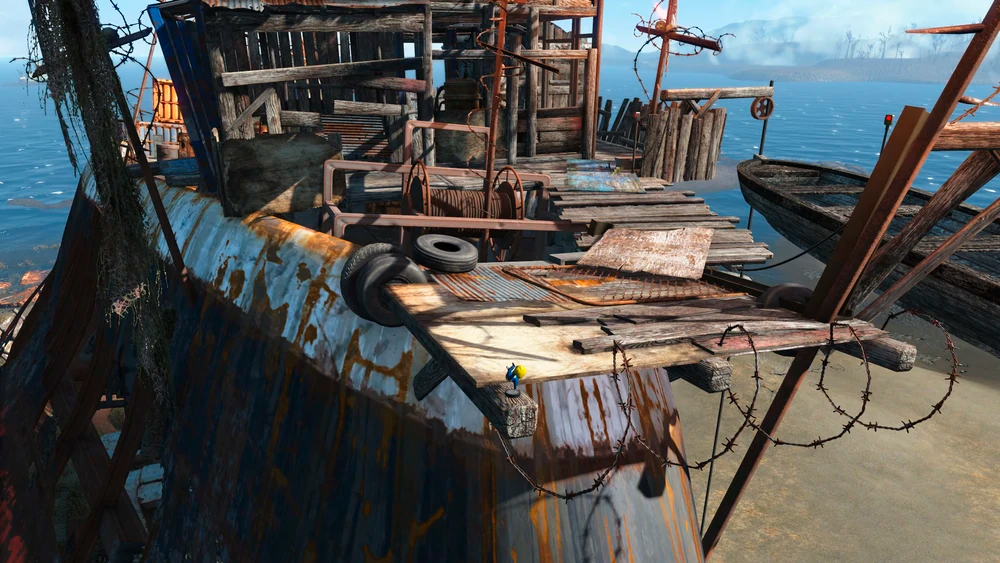 
Location: It can be found in the Parsons State Insane Asylum administration area, on Jack Cabot’s office desk, close to the elevator. The Secret of Cabot House quest must have been started in order to access the bobblehead. 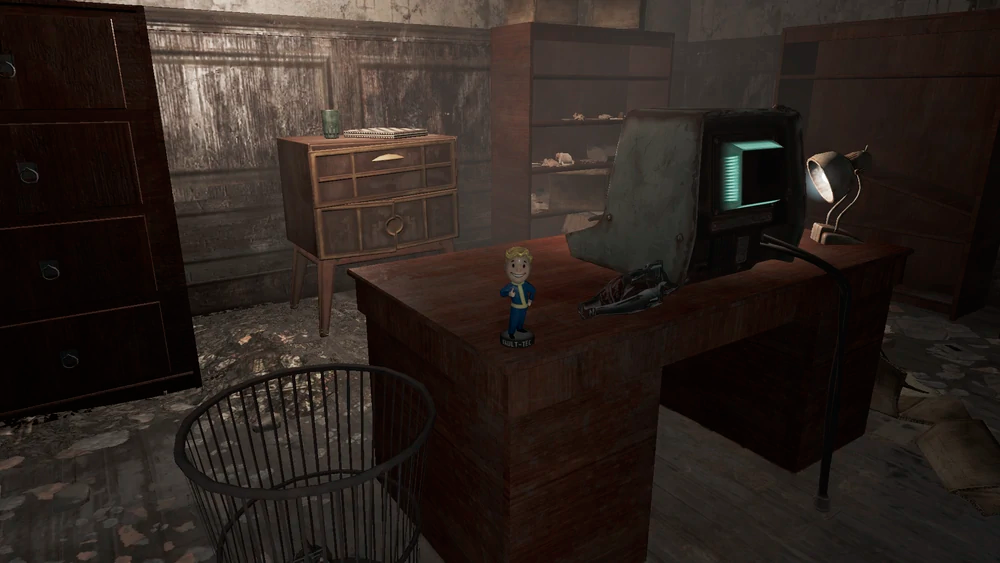 
Location: It can be found at Poseidon Energy, on the metal desk with a Tesla Science Magazine, near a steamer trunk on the central metal catwalk. 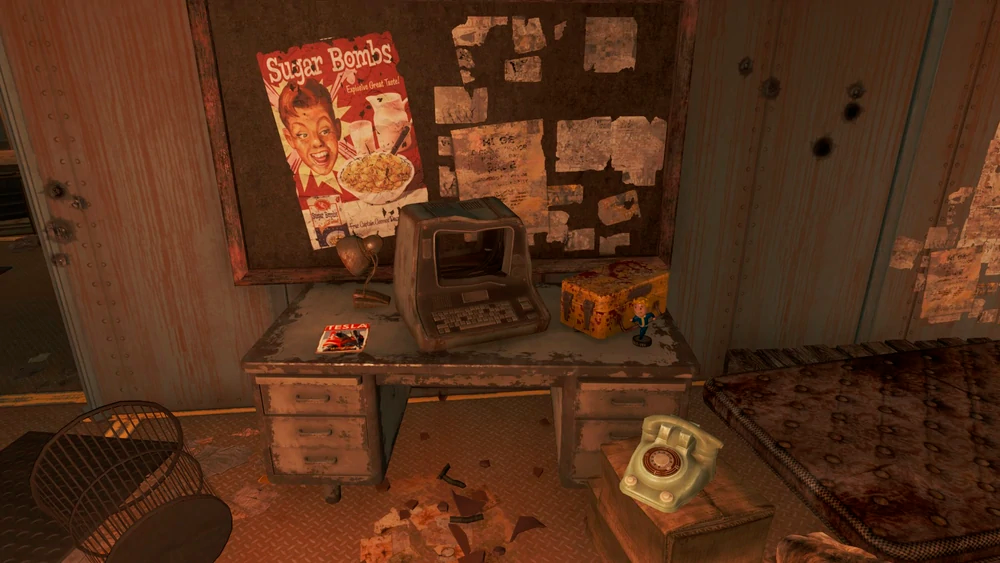 
Location: In the northwest room of the Boston Public Library sitting on a control. (Unless the Sole Survivor is in power armor, which for some reason causes the compass to orient this map differently. Then the control room is in the northeast corner of the building, on the second floor.) 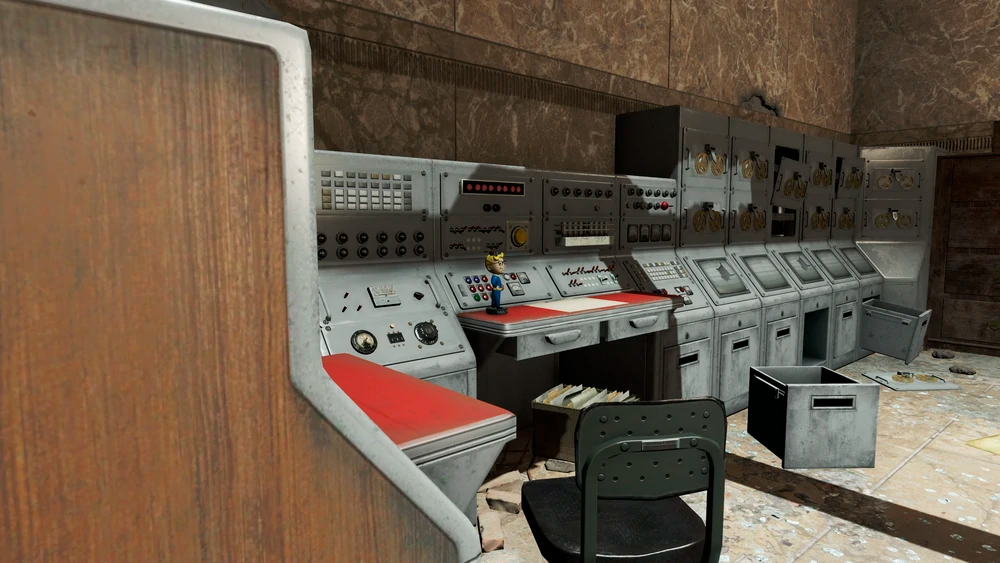 
Location: The Luck bobblehead can be found sitting in an open locker on the second story of a green half-sunken ship (where the Sole Survivor also activates the generator) at the southeastern end of Spectacle Island. 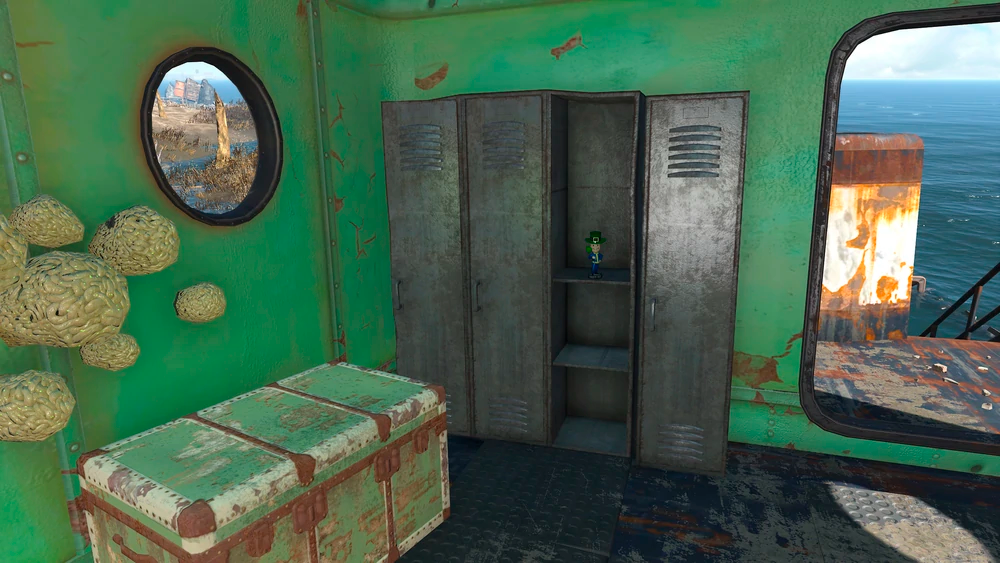 
Location: It can be found at the Museum of Freedom in Concord, located in the room where Preston Garvey is located. It is on a desk next to a broken terminal. 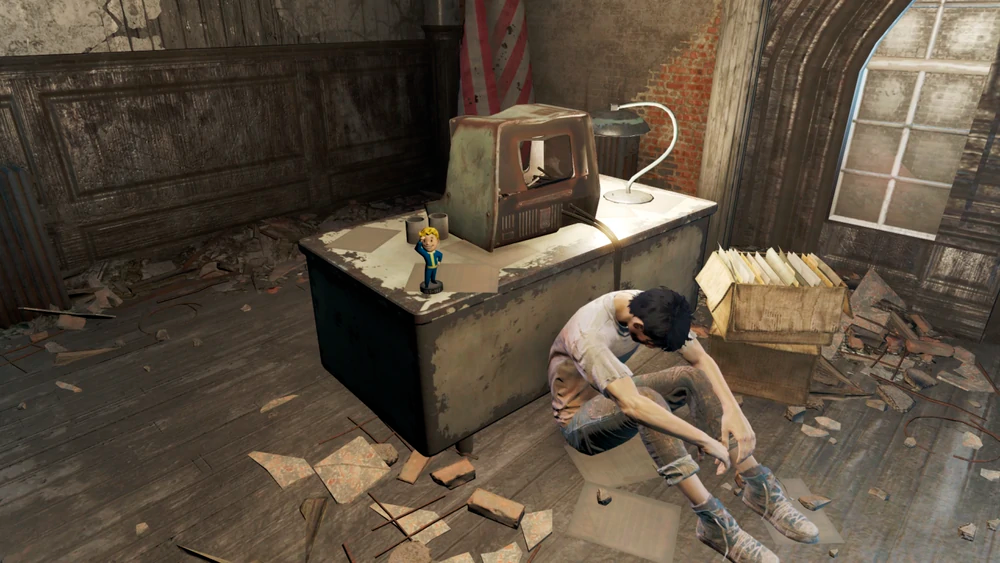 
Location: The bobblehead is at the topmost tier of the Mass Fusion building, resting on top of a metal statue overlooking the main hall. When entering the main lobby area, the Sole Survivor can use a scoped weapon to see the bobblehead when aimed upwards.


It is found on the fifth floor, accessible by jumping on the back of the couch beside the railing overlooking the lobby. The bobblehead will be below the player character’s feet on top of the metal statue. 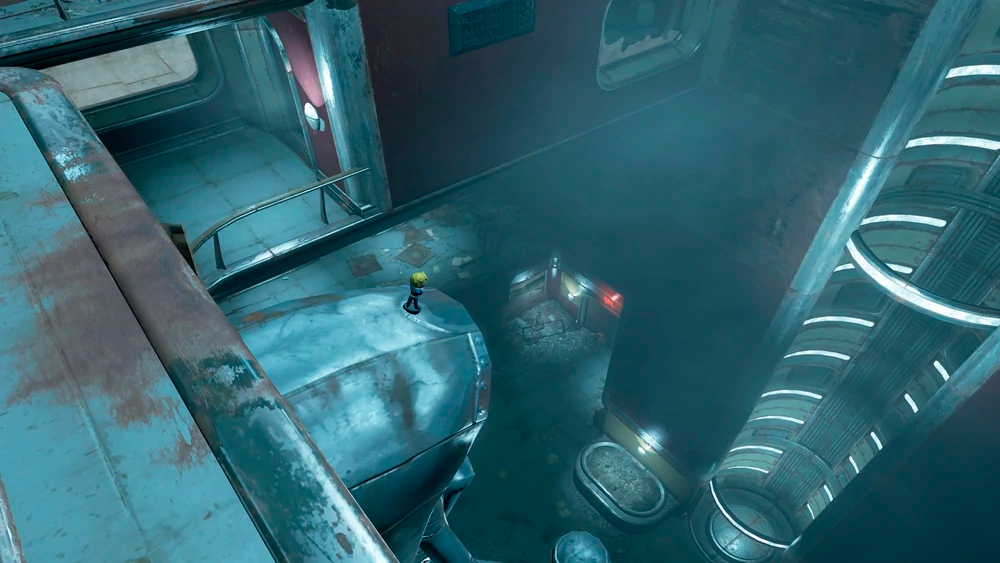 
Location: It can be found in Longneck Lukowski’s Cannery, on a broken terminal in the north office room overlooking the main cannery floor. 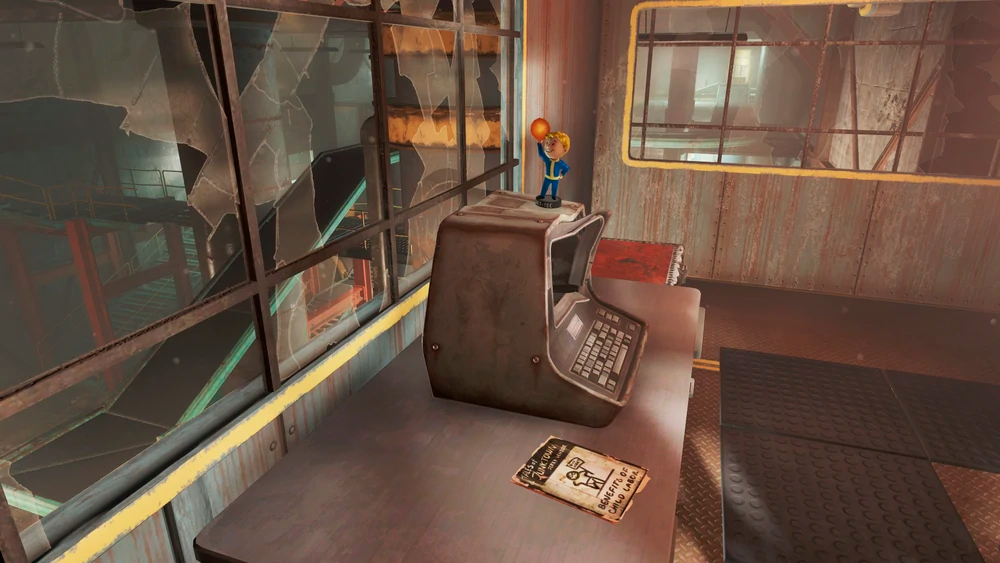 
Location: It can be found at the Pickman Gallery, on the ground by the center pillar in the last chamber before exiting. It is laying on the ground next to the flaming trashcan. 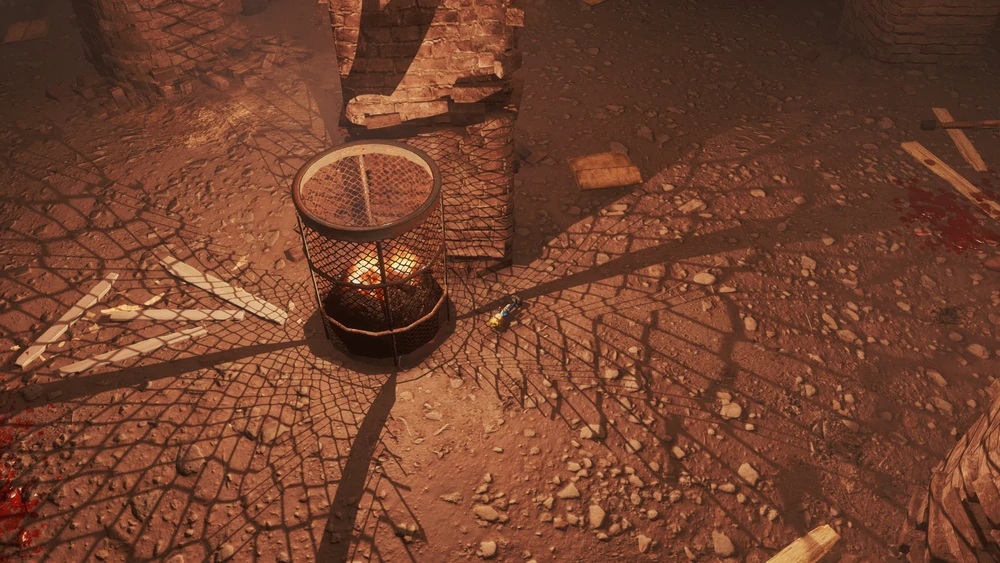 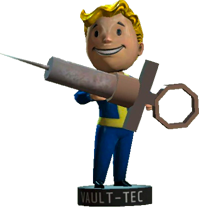 
Location: It can be found in Vault 81, in Curie’s office, southeast corner of the vault. The portion of Vault 81 that contains the bobblehead is not accessible until the Hole in the Wall quest has been started.


Notes: The effect from this bobblehead is multiplicative not additive, so in other words, by default (no ranks in Medic) this will improve stimpaks healing from 30% of health to 33% of health (rank 4 gives 8% bonus instead of expected 10%). 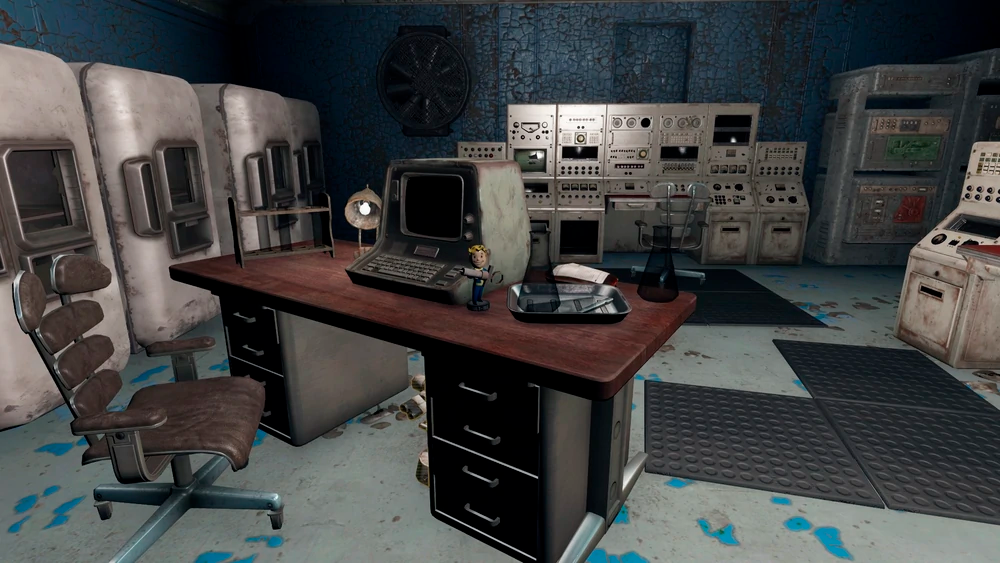 
Location: It can be found at the Corvega assembly plant on the very end of the top exterior gantry. It is located on the southwest roof section of the plant on top of a crate. It is on the top platform of the giant tower with a blue sphere reading “Corvega.” It is opposite of the entry point at the top of the stairs. 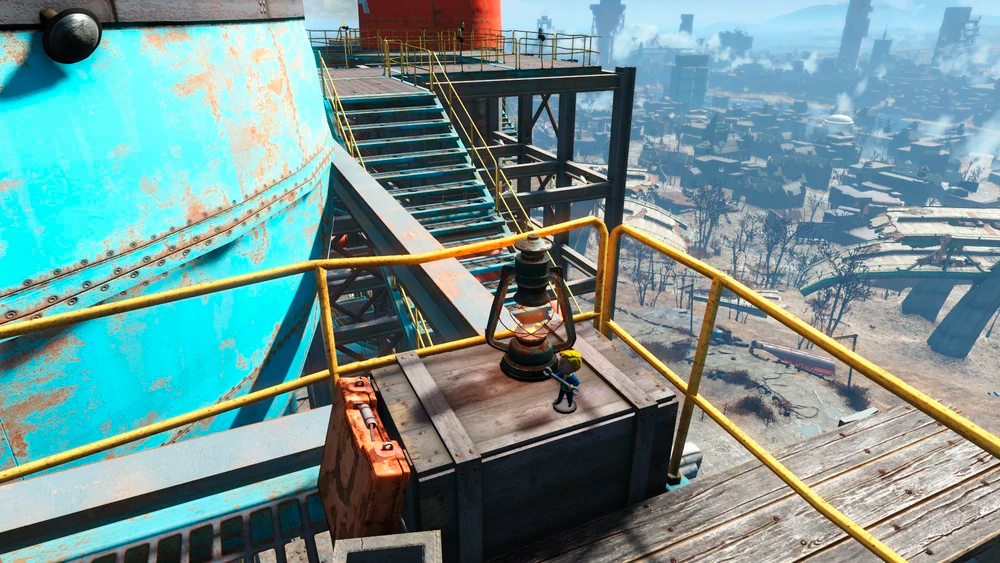 
Location: It is found inside Vault 75 on the desk overlooking the combat test area on basement level 3. Access is granted by retrieving the Vault 75 lab access card from the Gunner commander in the diner to get to this room. Follow the side quest that starts upon entering Vault 75.


Notes: The extra guess does not stack with the Close to Metal perk. 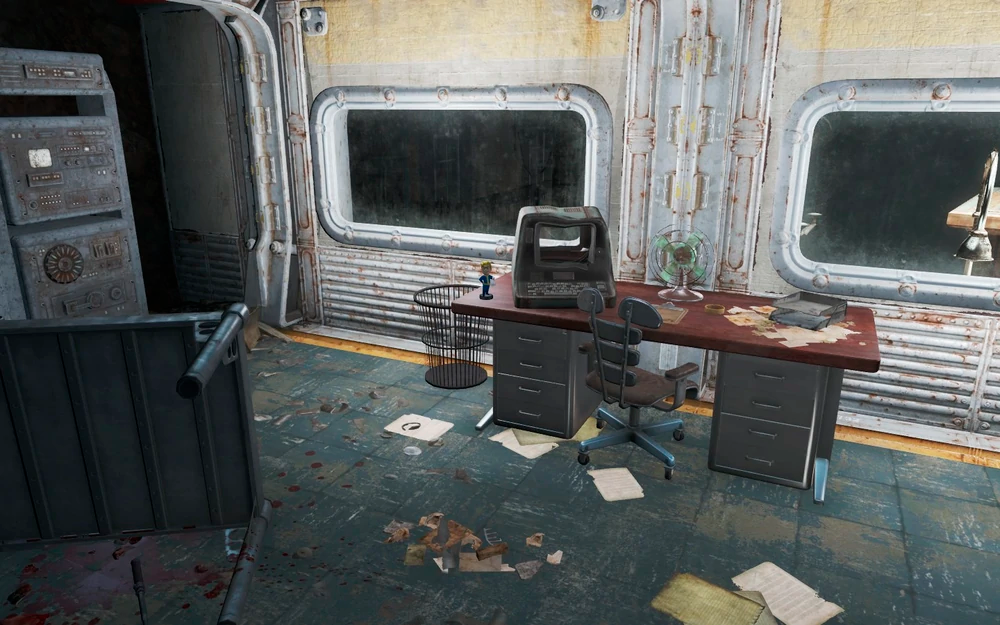 
Location: It can be found in Dunwich Borers, on a small metal table by a lantern, right next to the metal post terminal area #4. This is the area before the project managers area and the deep pool. 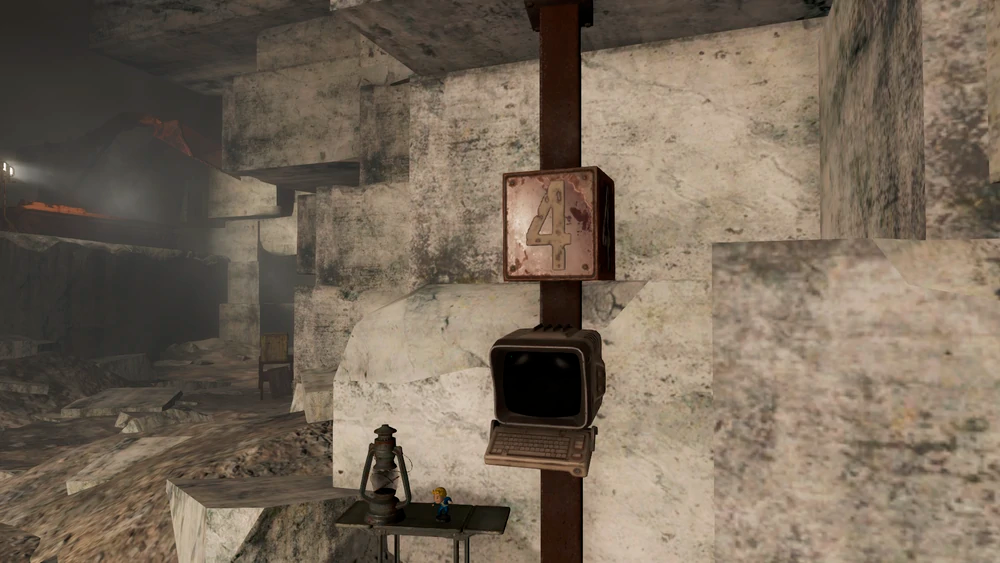 
Location: It is located in the overseer’s office of Vault 114 on the table behind Nick Valentine.


Notes: A few vendors gain double effect from this bobblehead (200 caps), e.g. Connie Abernathy and Bluejay, while a few gain no effect from it. 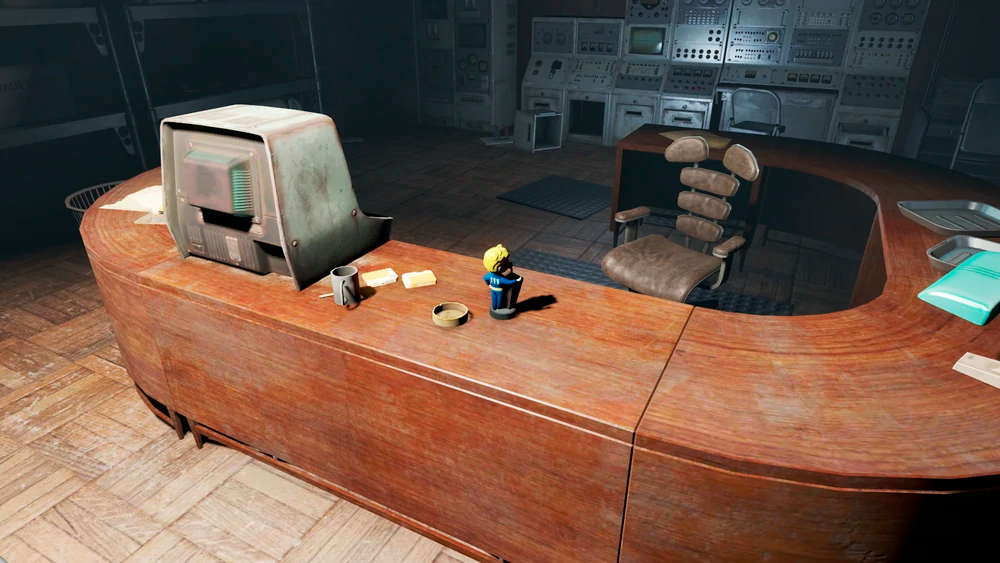 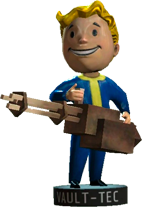 
Location:Vault 95, in the northeastern room of the living quarters, on a radio. It is guarded by Gunners and assaultrons. To reach the room, once down the elevator, take the first left and progress into the large atrium. Turn right and pass through the residential wing’s sliding door. At the lavatory, showers, and residential signs, turn left and progress downstairs. Move forward through the broken wall, turn right, and move past the Gunner-painted barricade. Take another right into a bedroom, and then a left through the broken wall. The bobblehead will be in this room on top of a radio. 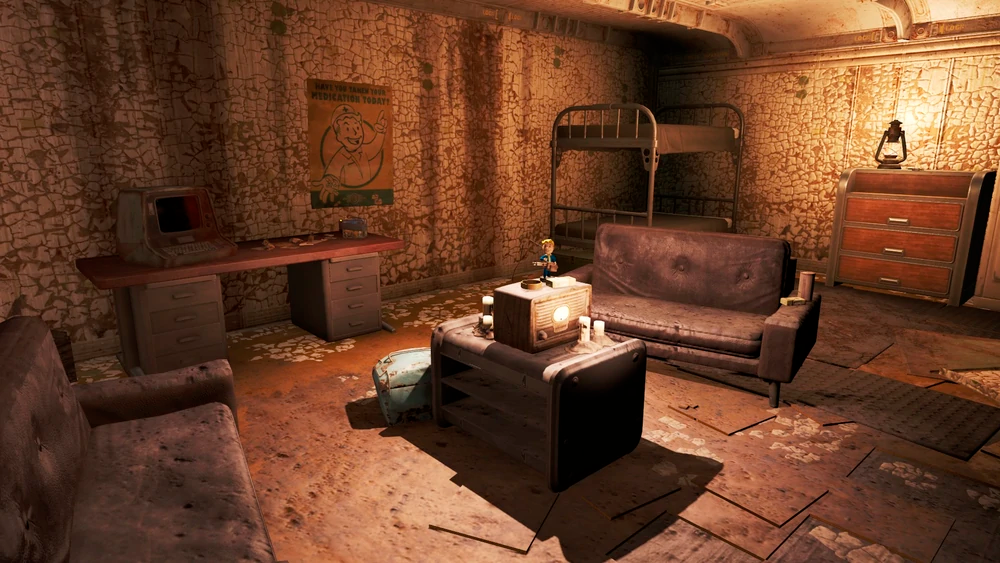 
Location: It can be found at the Fort Hagen: Command Center, southwest kitchens, on a small table between two fridges. Access to the elevator leading to the command center will not be available until the main quest Getting a Clue in Diamond City is started. 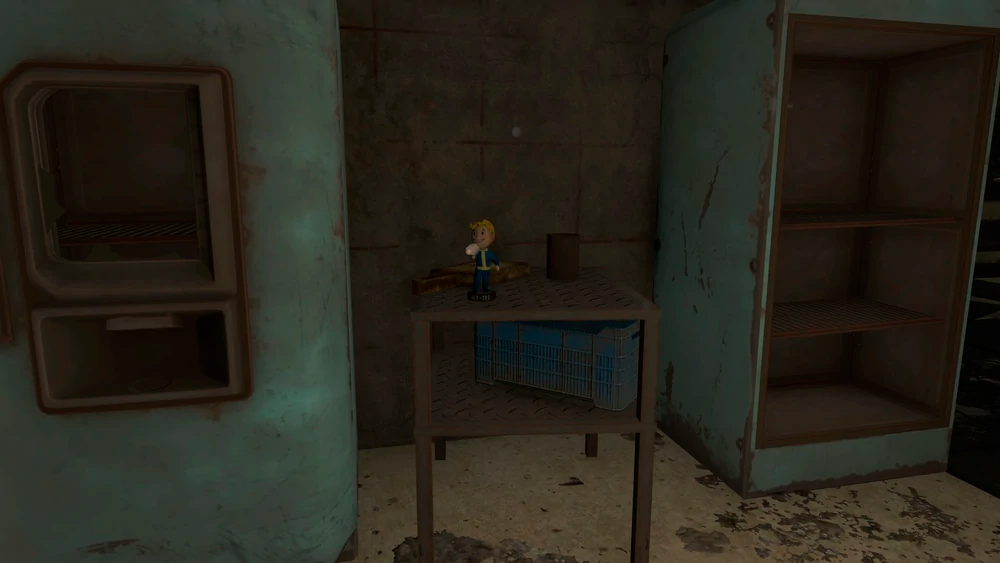 
Location: It can be found at Saugus Ironworks, in the blast furnace, with the magazine Picket Fences and steamer trunk, on the catwalk. Protected by Slag and three Forged. 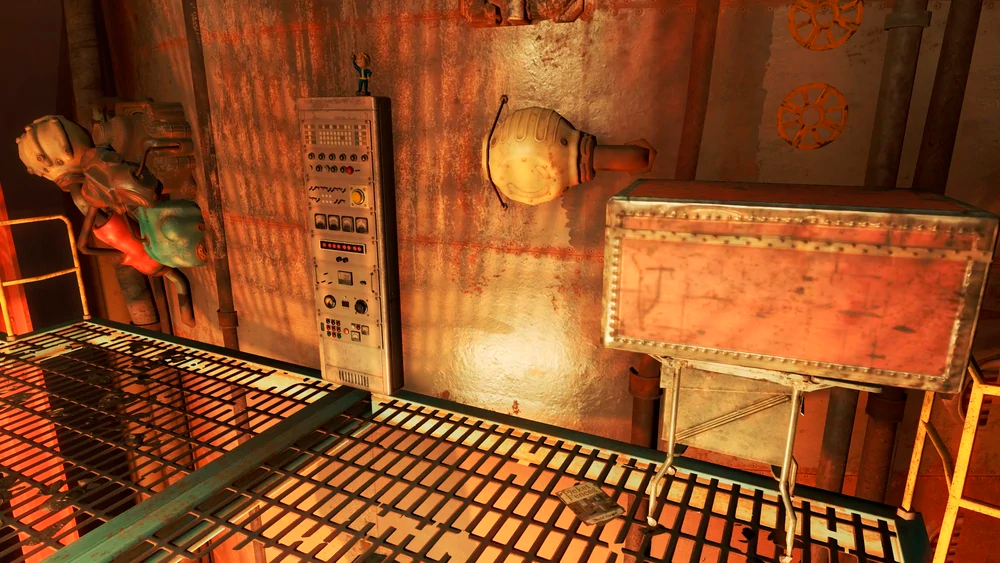 
Localización: It is located in Trinity Tower, on a table in the cage where Rex Goodman and Strong are being held. 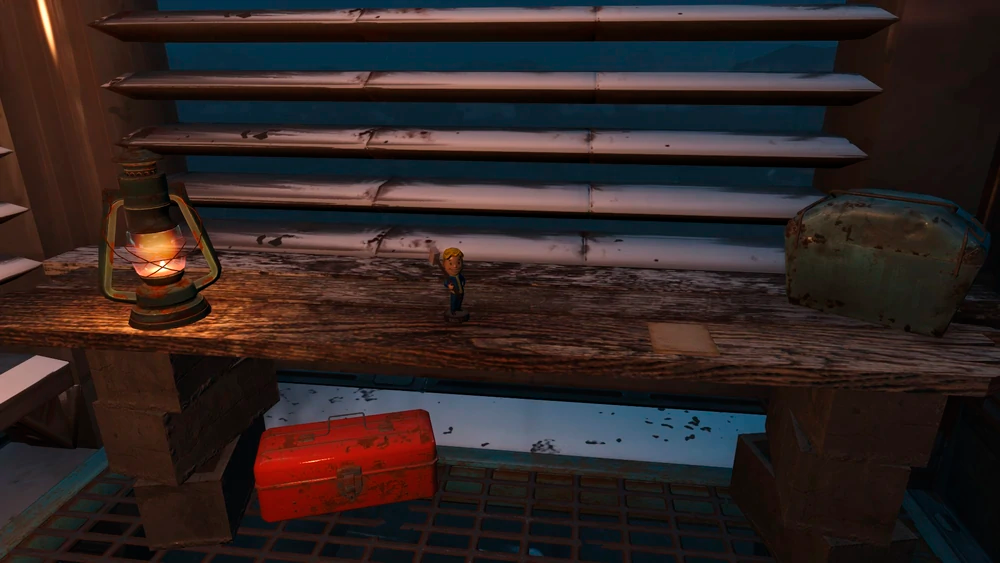 
Location: It is located in Gunners plaza, on the broadcast desk in the on-air room, ground floor, west side of the building behind a Master locked door. The room is accessible with the key, found on Ryder and Cruz. 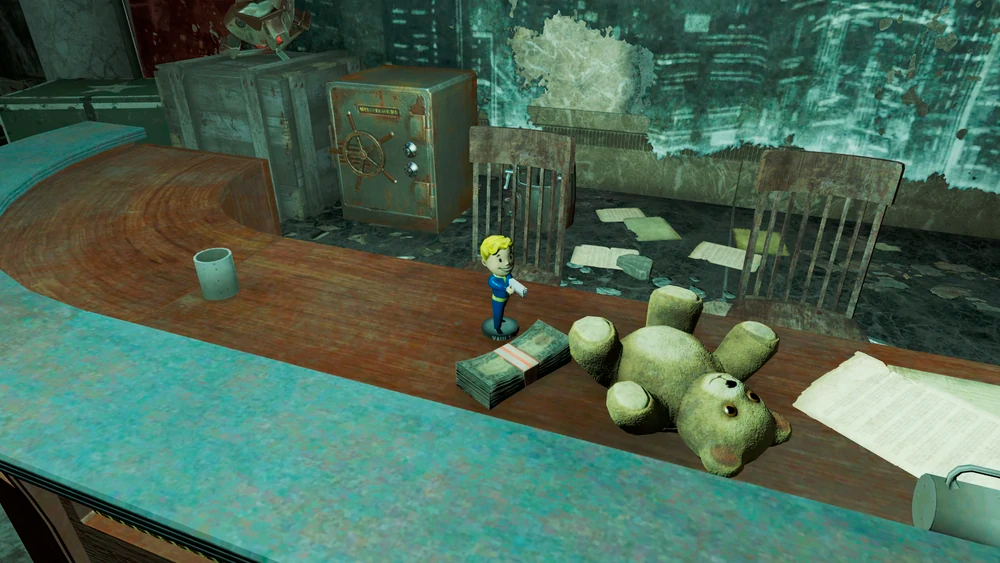 
Location: It is located in the Atom Cats garage, on the hood of the rusty car in the main warehouse. 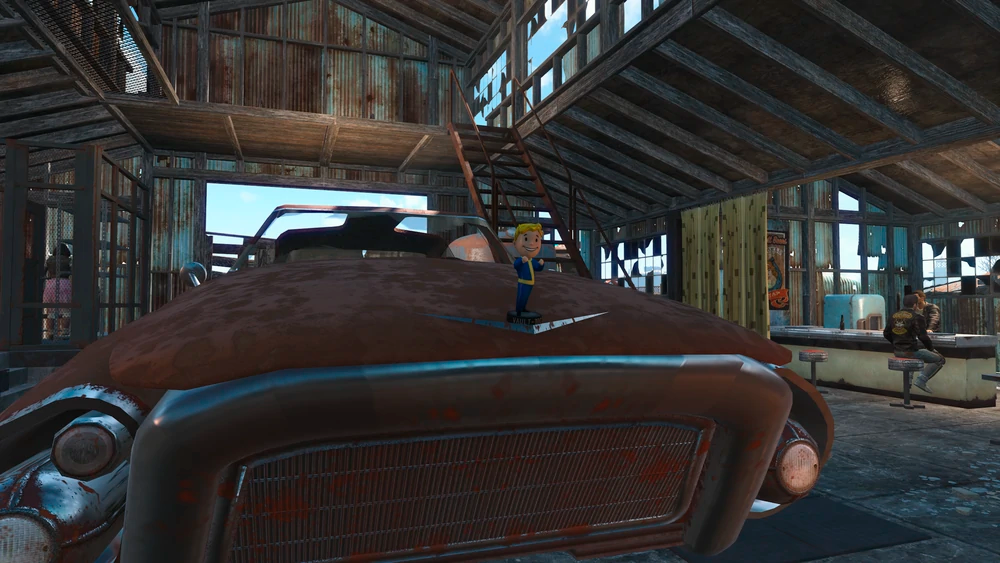 Thanks for reading this guide, I hope it’s helpful.

This is all about Fallout 4 – All Vault-Tec Bobblehead; I hope you enjoy reading the Guide! If you feel like we should add more information or we forget/mistake, please let us know via commenting below, and thanks! See you soon!