The Empire of The Dead was added as a faction in a free update in 2013. It plays quite differently from the other factions and it’s not easy to figure out how to get started. Information on The Dead is sparse and often outdated. This guide aims to fix those problems, showing you all the differences of The Dead faction, and giving you the strategy to go from a rough start to able to win.

Living as The Dead 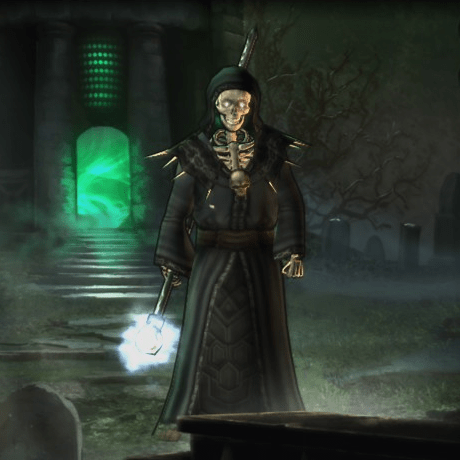 The Dead is the most difficult faction to get started, especially for newer players, and when the AI plays as The Dead, you will almost never see them above last place in the standings. Still, it has some unique abilities and spells that can be quite effective — once you get past some initial hurdles.

You may be asking, “every faction has differences, what is so special about The Dead?” The difference is that the other factions don’t have a basic aspect of the game taken away from their cities, like The Dead faction does. Let’s take a look at the faction’s differences first, and then get into the gameplay and strategy during a Dead game.

Cities for The Dead have the biggest challenge to overcome: since your people are all undead, your cities can’t use food or food resources, which means that they don’t normally grow in population at all. Getting your cities to actually start growing will be the most important part of the early game, and it takes significant effort. How to actually do that will be discussed later, in the strategy section.

City locations will need good production and essence numbers — food numbers (and food resources) are completely useless and can be ignored. You’ll need one essence in every city for the spell Morrigan’s Call, so think of locations as having one less essence available for city spells than normal. You could theoretically build a conclave with no essence, and then select to add an essence at level 3, or build a town with no essence and select to add +3 growth at city level 3. However, it is nearly impossible to get the population needed to get to city level 3 without Morrigan’s Call.

This essence requirement doesn’t just apply to new cities. Once you get to the point of capturing rival cities, it is usually best to raze any without it. Razing will often reveal a nearby location that does have essence for you to build a new city. If not, consider blocking the area from other factions by building an outpost or two, the AI is quite willing to plop down a city smack in the middle of your existing ones.

With no need for food, you may think that all of your cities will be conclaves and fortresses, however don’t ignore towns. Towns still help The Dead; they have money and city level up bonuses, like the city level 3 bonus that adds +5% HP to all of your units.

With no access to food, you have no access to the primary way other factions grow their populations. But, any other ways to add growth still work, and you have the spell Morrigan’s Call. 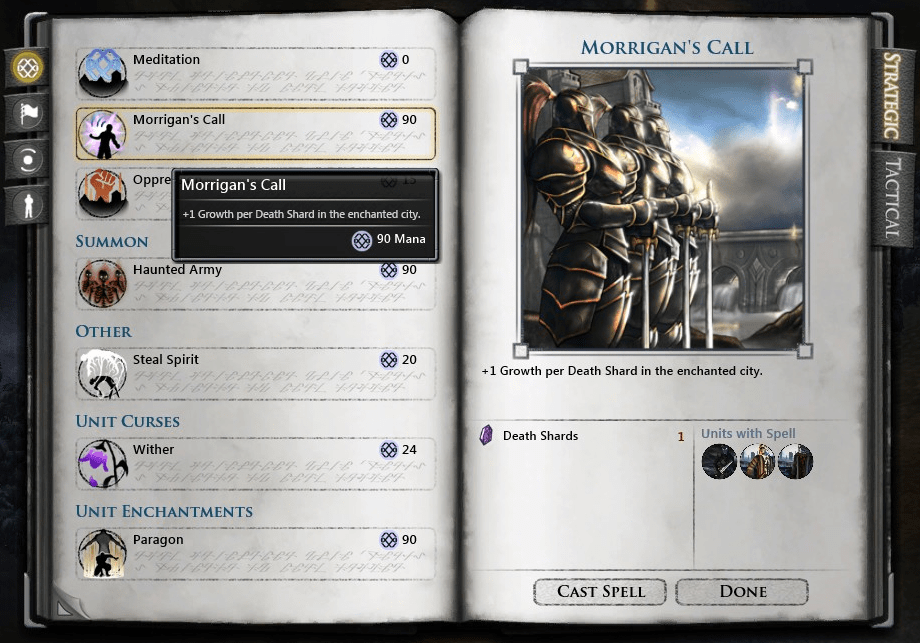 In the same way that other factions have caps to their population based on food, you have population caps based on “graves”. Each new (or captured) city starts with 50 graves, exactly the number needed to get to city level 2, where you select conclave, town, or fortress. Three buildings, unique to The Dead, raise the number of graves in a city. Each gives you enough for the next city level plus a little extra buffer. The first building, the mausoleum, is available from the start, the other two are researched in the civilization tree.

Being undead, your units have some unique traits and abilities. 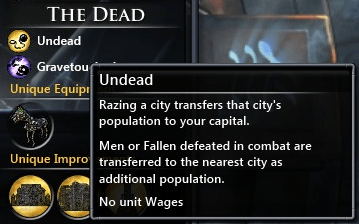 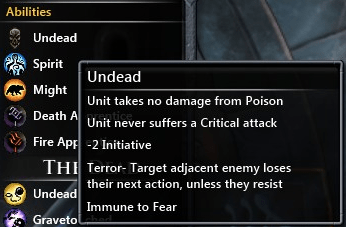 Dead units have two unit traits not available to other factions.

In addition to the non-Dead unit abilities above, heroes have additional abilities and spells. 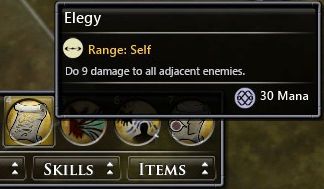 Your sovereign, whether Morrigan the Risen or a custom sovereign, is both a Dead unit and a hero, so they get all of the unit and hero abilities and traits (except for undying curse). This does include the spirit trait for custom female sovereigns. Sovereigns are not built, so the labor cost is ignored, they don’t have a three trait limit like units do, and “female” has no cost in the points used to design your sovereign. So there is no reason not to make your custom sovereign a spirit, taking half damage from physical attacks, especially if they are melee focused. Morrigan does come with a trinket that adds defense and curses melee attackers, and can be traded to one of your heroes (probably best to go to a melee hero). However, there is nothing stopping you from making a female sovereign with the same trinket, getting the best of both worlds.

You used to be able to give your custom sovereign life magic, giving weird synergies, or remove Morrigan’s special spells. There are some early guides online that mention these oddities, but they were patched out quite some time ago.

Most things you want to do as The Dead are the same as other factions. But, there are some key things you’ll want to have on your mind, especially early on.

You’ll need to get your first city built as soon as possible, just like any other faction. However, it is crucial to have one or more essence in your city. It’s not very common, but you can get a start with no essence nearby. If you can’t find a good spot within the first 2 or 3 turns, it’s probably best to abandon the game and start a new one.

Get ready for Morrigan’s Call

Once you have your first city, your immediate concern will be getting the requirements for Morrigan’s Call. You’ll already have the essence it needs, and that will also be a concern for your other cities going forward. It costs 90 mana, so it will be a little while until you have built up enough. Temporarily casting meditate in your city will help. The last thing is connecting a death shard. You’ll need to research “Shard Harvesting” in the magic tech tree, but it doesn’t have to be the first thing you research. You’ll often have time for another tech or two before you even find a death shard.

If there is a death shard in range of your first city, great! If not, scout around until you find one. Use your sovereign, build a scout or two and get looking. If you are using Morrigan the Risen, buff your starting army with a shadow warg. If you can’t find a shard within 20 or 30 turns (or however many you think is appropriate) it may be time to abandon the game and restart a new one, you are just getting farther and farther behind the other factions.

Build and protect your first pioneer

Once you’ve found a death shard, get a pioneer out there to build a city or outpost and claim it as soon as possible. Be careful with your pioneer though! Your city starts with 30 population and a pioneer costs 30 population to build. So, if a bandit kills it on the way to hook up a shard, you will most likely never recover and should probably quit the game and restart. Also, be aware that scouts (and other size three military units) cost three population to build, so if you can’t build a pioneer, it’s probably from building a scout first and going under 30 population. If that happens, get the tower of domination built ASAP. Or, if you build the tower of domination before the scout, the population will already be recovering while the scout is being built.

Once you have a death shard connected you can breathe a little easier. You are still well behind all the other factions, but at least you aren’t facing instant lose conditions anymore. Your main focus now is playing defensively and building up your power base. At some point, the AI players are going to start trying to bully you, feel free to tell them “no”. They might declare war on you, but if they even send soldiers at all, no early troops will be able to stand up to undying curse and/or spirit units.

Once you’ve gotten your strength up a little, it’s time to go on the offensive. The next time a nearby faction declares war on you, take a city or two. It appears that razing cities (like the non-essence ones) makes the AI more eager to ask for peace, although this may just be conjecture. Do this two or three times, you’ll get out of last place in the standings, and they will stop trying to bully you. Now, you are more or less playing a “normal” game and can start working toward whichever victory condition you want. There are still a few things to keep in mind while doing so though.

The Dead is probably the hardest faction to start off with, but most of the difficulty is stacked in the early game. You may have noticed that in the “First City” section, there are three different things that warrant a, “you should probably quit and restart if this happens.” This makes them hard to learn, and especially brutal to newer players. However, The Dead faction has some unique and powerful abilities that can let them claw their way up and win the game. You just need to survive long enough to use them.

Hope you enjoy the Guide about Fallen Enchantress: Legendary Heroes – Living as The Dead, if you think we should add extra information or forget something, please let us know via comment below, and we will do our best to fix or update as soon as possible!