This tutorial is for players who are new to Eternium. If you follow this guide, you can finish the campaign and reach the maximum level in less than 12 hours. After that, you are perfectly set up to either compete on the event ladder, craft high-value items, or earn PvP honor.

This tutorial is for players who are new to Eternium. If you follow this guide, you can finish the campaign and reach the maximum level in less than 12 hours. After that, you are perfectly set up to either compete on the event ladder, craft high-value items, or earn PvP honor.


As starting character, I recommend the Bounty Hunter. But most of my advice works for Warrior and Mage as well.

In Eternium you are controlling a hero who has items and abilities. Currency-wise, there are gems and gold. You always start in a village with various NPCs (merchant, smith, etc.). From this village you can enter story maps, trials, or the PvP arena.

Your Bounty Hunter can carry items like pistols, rings, boots, a belt, and trousers. Additionally to the currently equipped items, you have an inventory with additional storage. And in the village there is a stash with even more space. 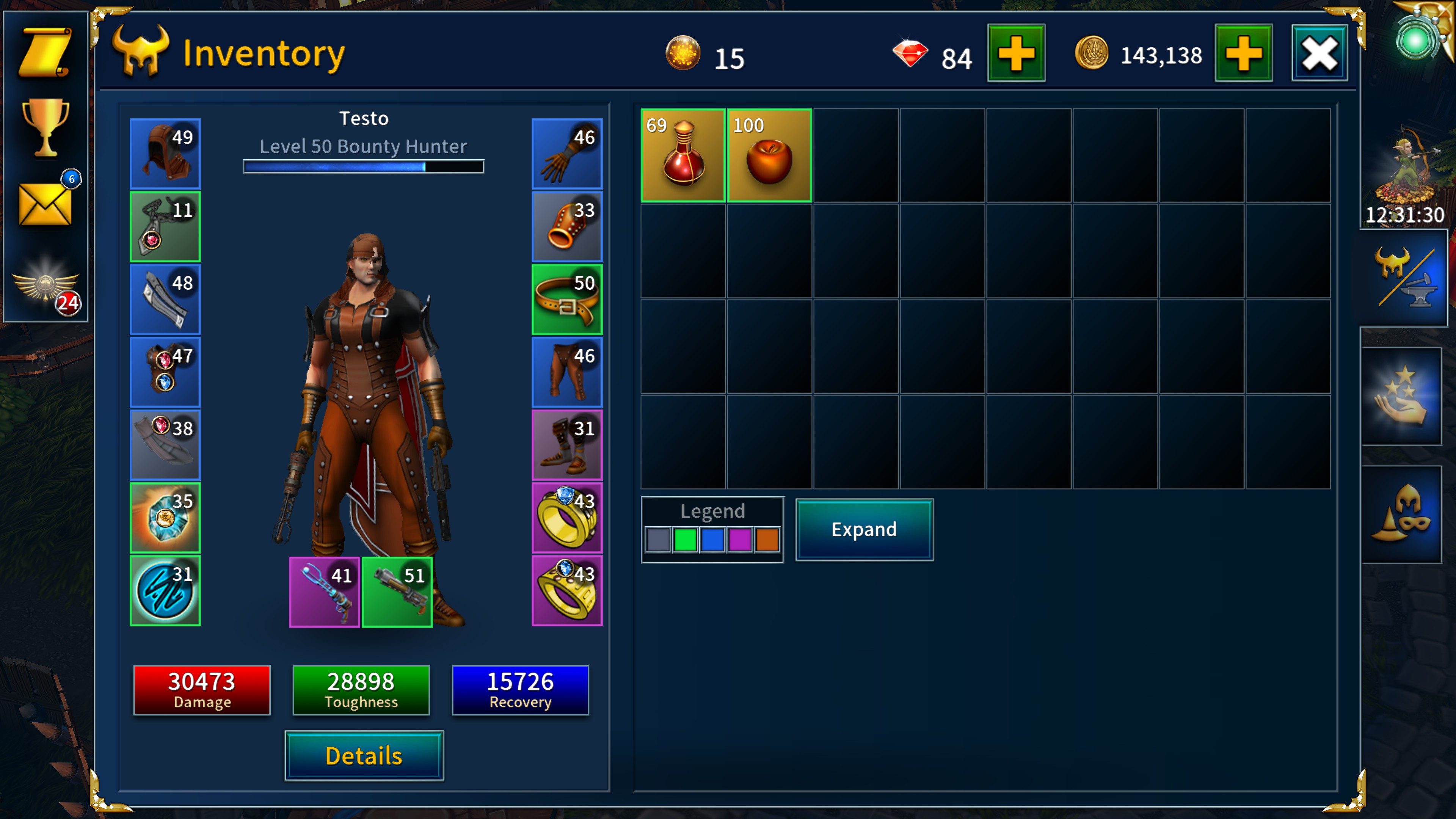 At the beginning, you will find stronger items every few minutes. Make sure to regularly equip the strongest items. Eternium will calculate the impact that switching an item will have – so you don’t have to calculate yourself if +10 power is better or worse the +5% critical damage.


As a Bounty Hunter, you should focus ONLY on damage when selecting items. Just use every slot to put whatever item gives you the biggest damage increase.


Items that you do not need (anymore) can be salvaged in the village. That gives you resources like cloth or essence of water. You will need these later for crafting strong items.


And then there are consumable. At the beginning you will encounter health potions and apples – both restore hit points during a fight. You should carry some in your inventory at all times!

In Eternium your hero has three kinds of abilities. 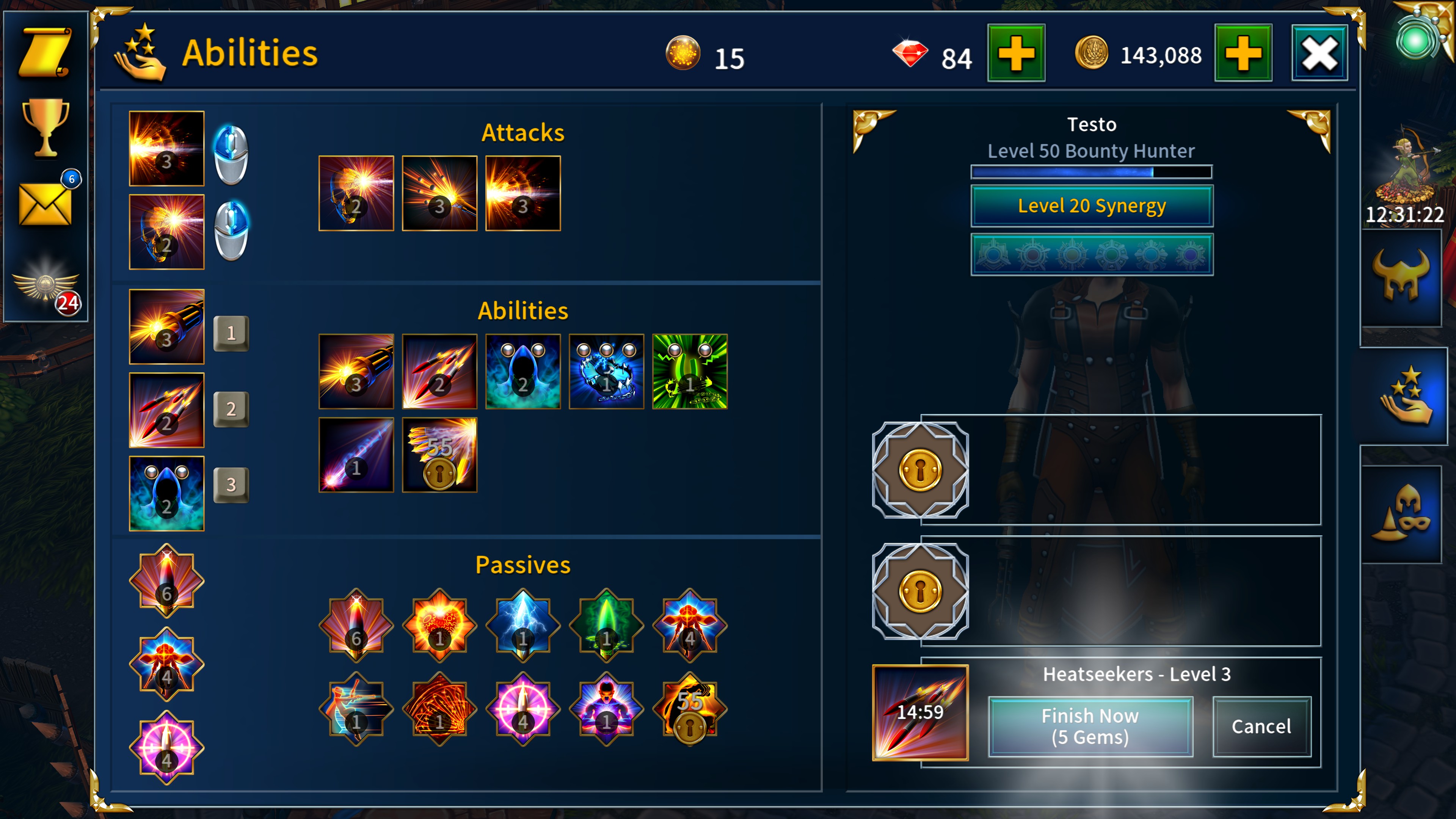 Each ability can be trained to make it stronger. With higher hero levels you get access to more abilities.


You should buy the additional slots for both active and passive skills as soon as you have enough gems.

You get gold for killing monsters, opening treasure chests, and finishing quests. At the beginning you should spend gold to increase the storage space in your stash. Later in the game there will be more use cases.


Should you ever need gold, you can sell items to Mitzu the hoarder instead of salvaging them.

Gems are much more rare than gold – and more valuable. With gems you can buy very strong in-game advantages. Eternium makes money by selling you gem packages for real money. But if you use them wisely, the gems you find during the game are sufficient!


Very important: never waste gems on opening locked treasure chests, to buy items, or to instantly level-up an ability. Use your first gems to increase the size of your inventory (for convenience) and to buy additional slots for your abilities and your team. That is enough to finish the story on normal difficulty and to reach the max level.

There are two type of dungeons in Eternium. At the beginning you can only play the story campaign. It stretches across four acts with 15 maps eachs. You need to play these in order. 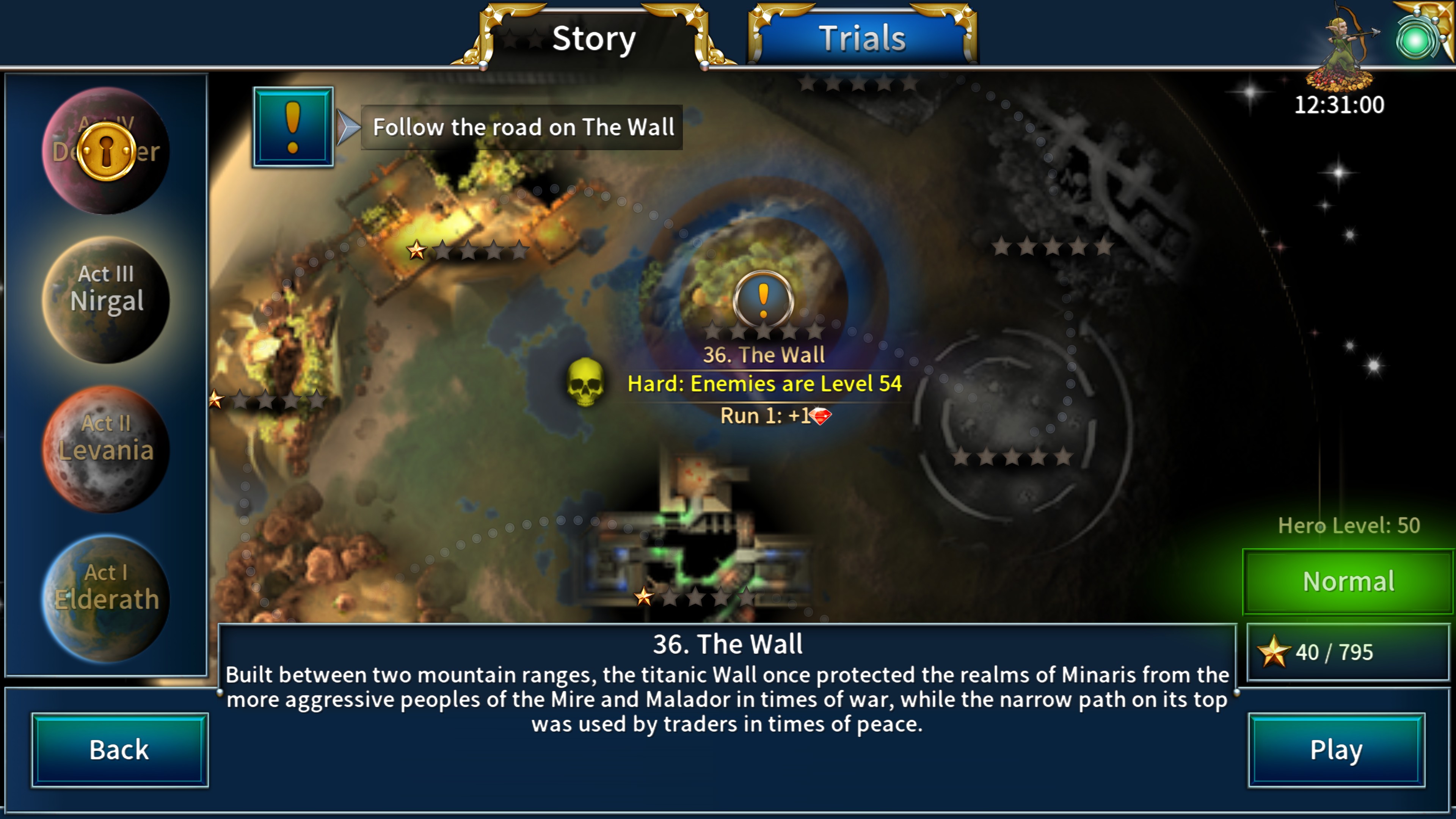 For every map, there is a quest from Alarian. 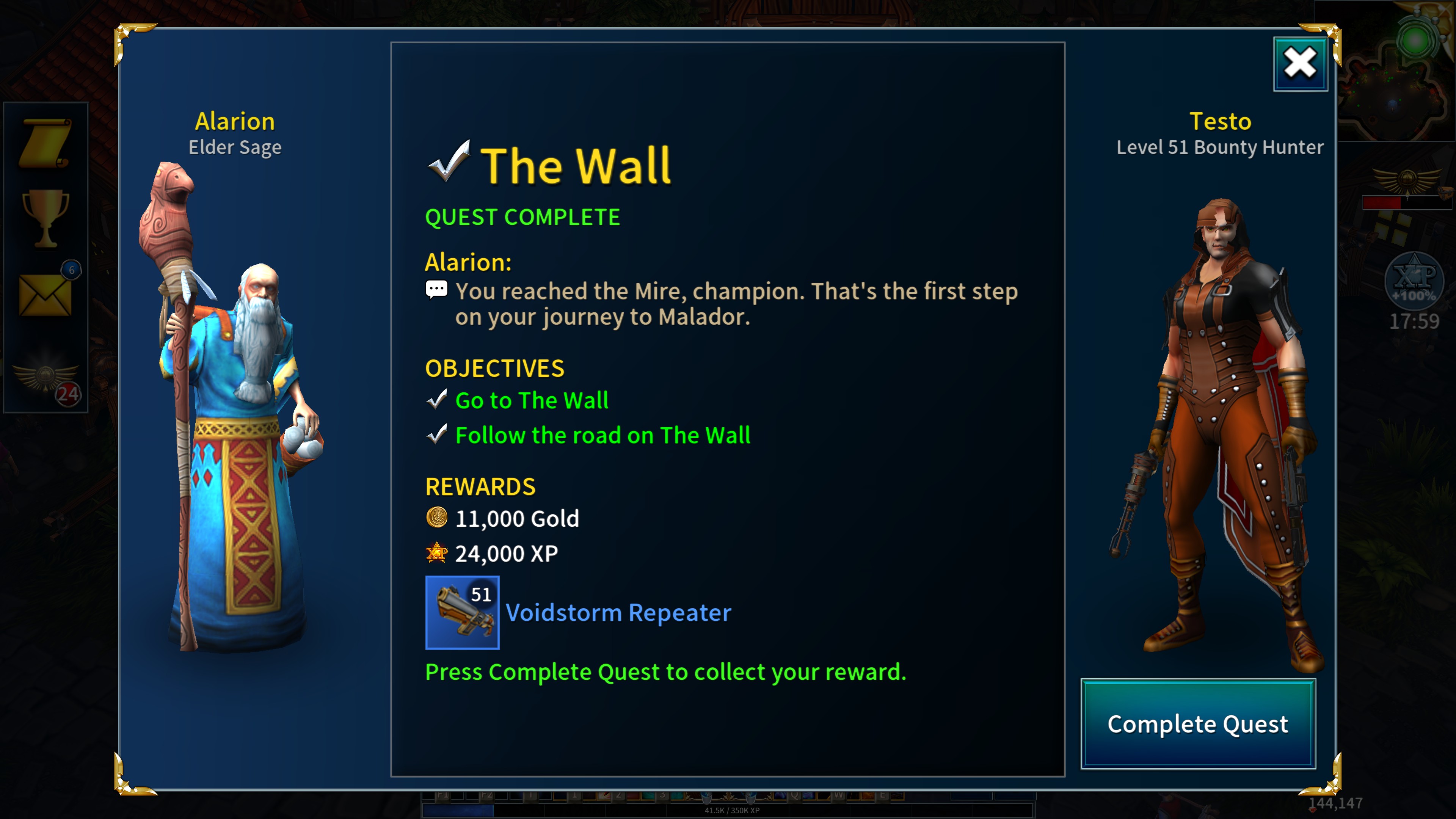 
After finishing a few quests, you will get access to the trials. These are randomly generated maps with no story and no quest. You simply kill monsters until a final boss appears. If you can beat the boss, you get access to the next trial with slights stronger enemies.


My recommendation for your first character is to just finish the story and ignore the trials. If you hit a quest that has enemies you cannot beat, you should do a few trials to grind experience, gems, and items.


To maximize your value for time, do trials that you can finish within two minutes. It is better to finish trial 6 five times in two minutes each than to spend ten minutes on trial 9.

Now that you know the basics, let’s talk about the skill and item build for your Bounty Hunter.

The strongest attack of the Bounty Hunter is the Explosive Shot. It is the only attack you will need.


You should add the active abilities Rapid Fire, Heat Seeker and Smoke Screen.

The best passives to go with that are Piercing Ammo, Path Finder, and Tracer Ammo.


Apart from the Smoke Screen all these abilities interact with each other. You will be able to destroy large groups of monsters with massive AoE damage from explosions and fire damage.


And if the enemies get too close, you can escape with Smoke Screen.

As I already said, you should focus on additional damage. The only exception are your pistols. If you can get Torch and Firebug, the pistols from the Igniters Set, you can increase the effectiveness of your abilities even more. If you find these pistols with somewhat ok damage values, equip them! If you do not find them, any pistols with a lot of damage will do.


Long-term, a combination of the Demolitionist Battlegear and Havoc Gear sets is the best choice for your remaining items. But it is highly unlikely you will encounter multiple of these set items while playing the campaign for the first time. So stick with maximizing damage.

The alternative to this build is to focus on Snipe and Poison Ammo while using Malice and Illwill, the pistols from the Shadow Assin‘s set; normally combined with items from the Stalker Set.

While solving quests, you will get 3 team mates. The Warrior Marcus can stun, the Healer Eileen can pull enemies together, and the Marksman Robin increases your damage. 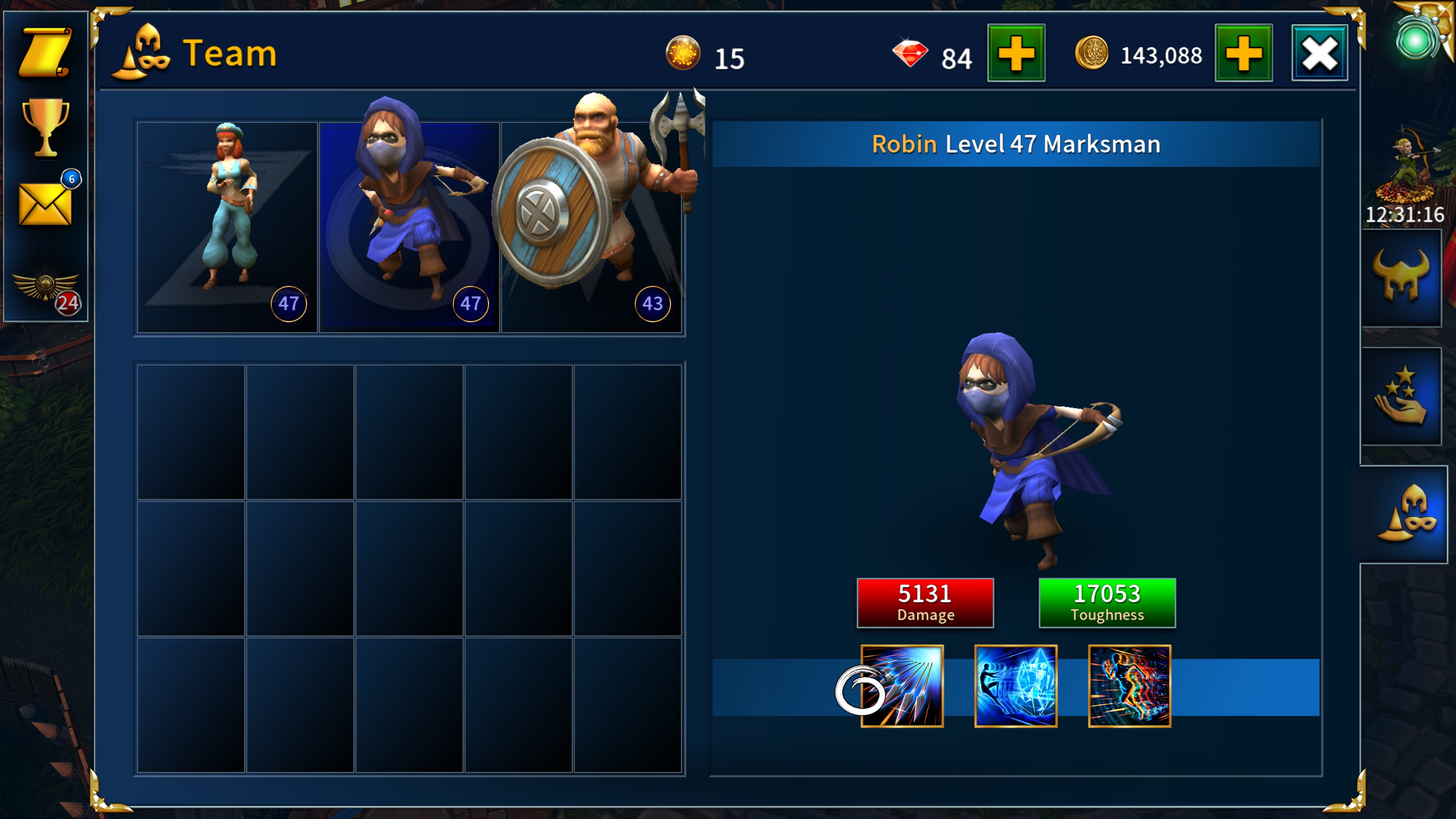 Each of them has – depending on their level – one to three skills. The first skill you have to active manually, to others they use on their own. They will get level-ups automatically by following along and joining fights.


The gems to open up all three slots for your team are a good investment!


The optimal team for a Bounty Hunter is two marksman and one healer. But to beat the game on normal difficulty, you can just go with the default team.

As a Bounty Hunter, you will want to attack your enemies from as far away as possible. Ideally you can kill them before they reach you. If Explosive Shot is not enough, you can inflict additional damage with Rapid Fire and Heat Seeker. Worst case, run away with Smoke Screen 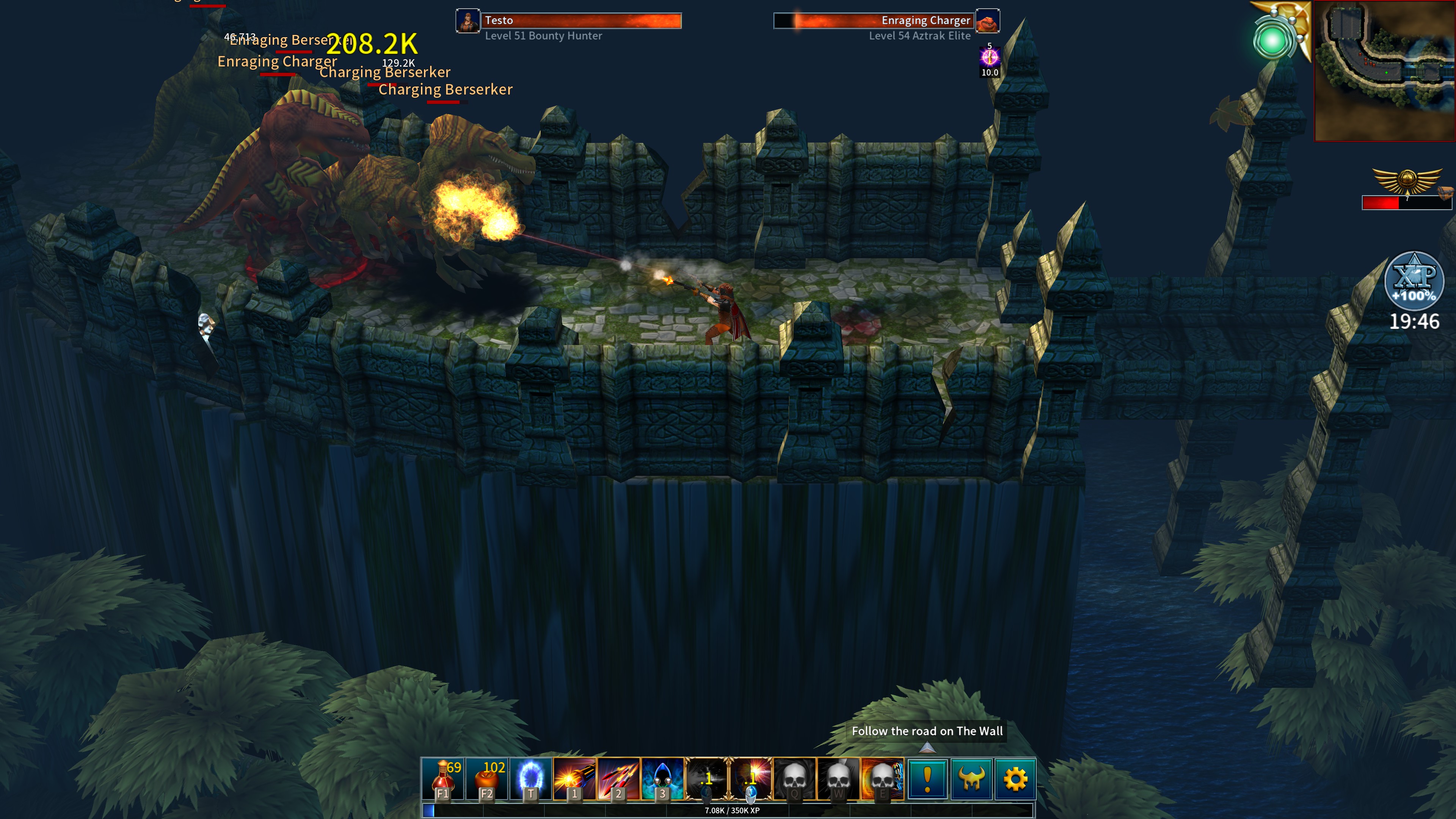 The most dangerous enemies are those that can run or jump at you with a stun. Once stunned, you are dead since you have low hit points and armor.


Also, groups of ranged enemies can be dangerous if they all start their attack animation at the same time. Look out for that!

Many items have sockets, in which you can place gemstones – not to be confused with gems. Sapphires, topazes, etc. exist in multiple levels. Three identical gemstones of the same level can be combined into one gemstone of a higher level. For a small fee of gold, of course. 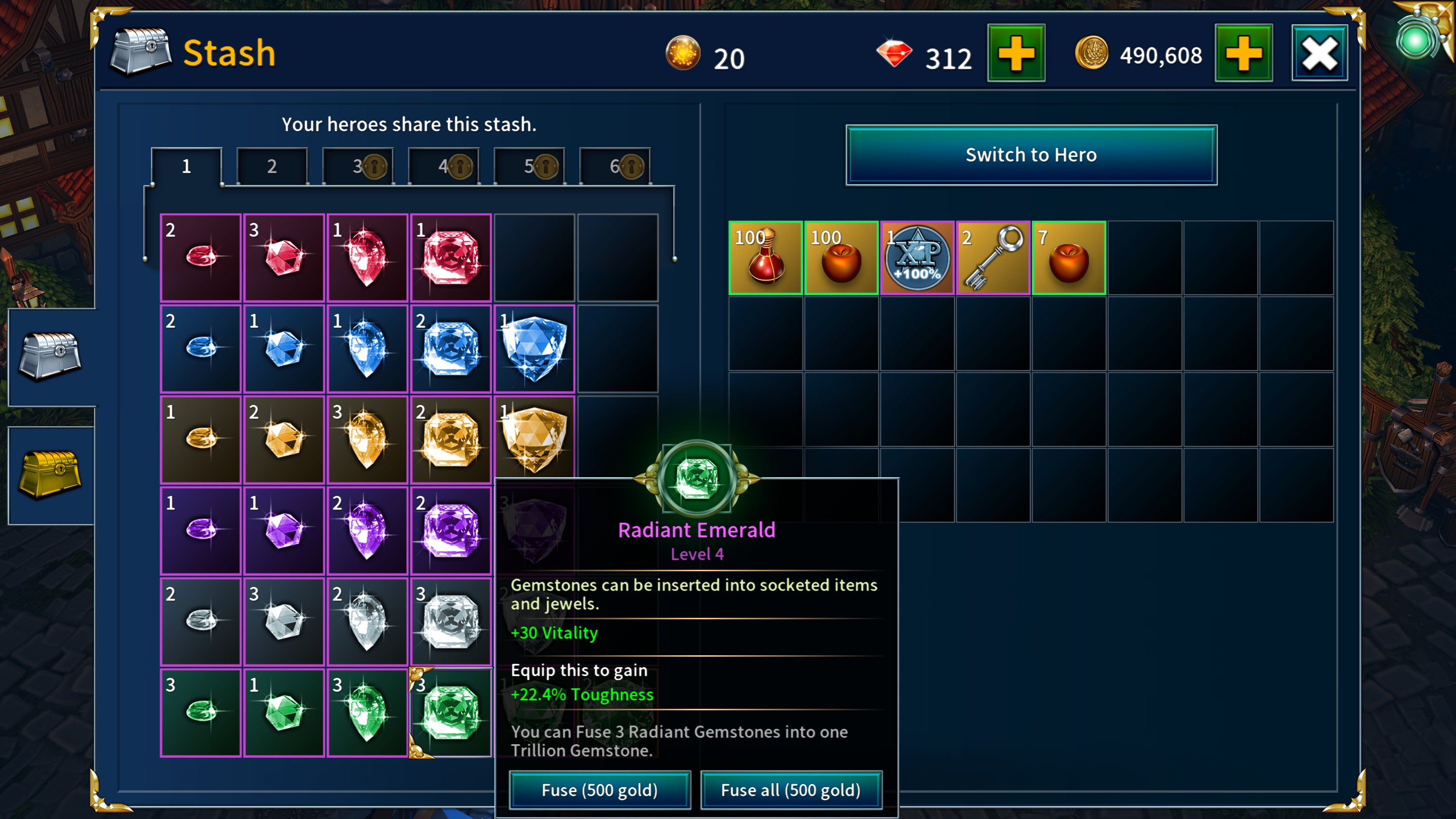 At the beginning, you can socket whichever gemstones you have at hand into whichever items you are using. For a small payment of gold, you can removes them once you decide to discard an item.

Unused gemstones should go into your stash. You might need them later.

Please ignore crafting until you are level 70. It is a pure waste of time and will just distract you. Once you are level 70, crafting is the only reliable way to get very strong items with the exact attributes you want. 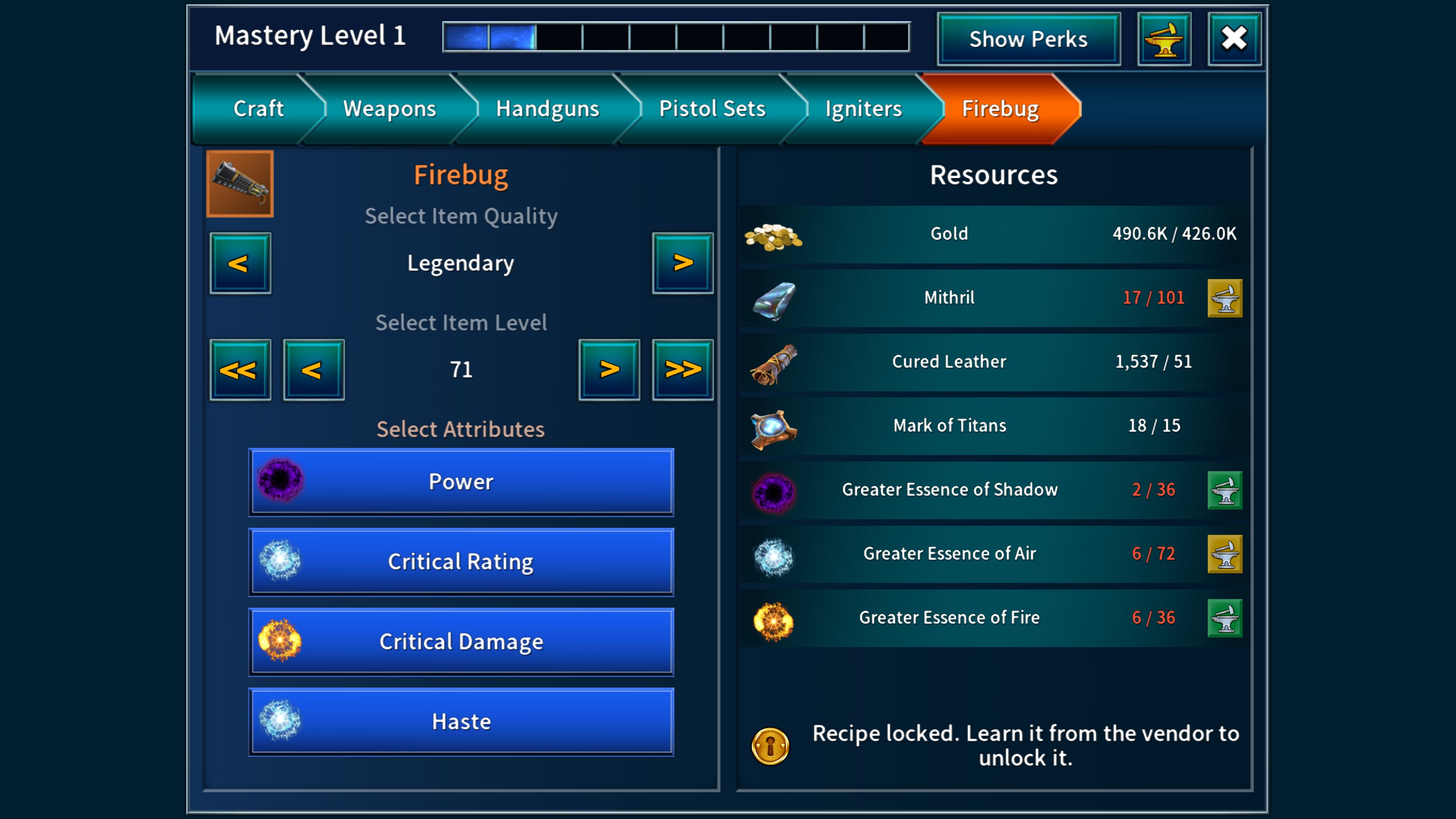 After a while, you will start receive one dungeon key every 8 hours. Unless you already hold three of them, in which case you will get nothing. These keys unlock a bonus map in act 1 that you can clear quickly. Since the level drops a lot of gemstones and items, you should do it whenever you have keys.

You Bounty Hunter is level 70 and you have finished all quests? Here are some ideas: 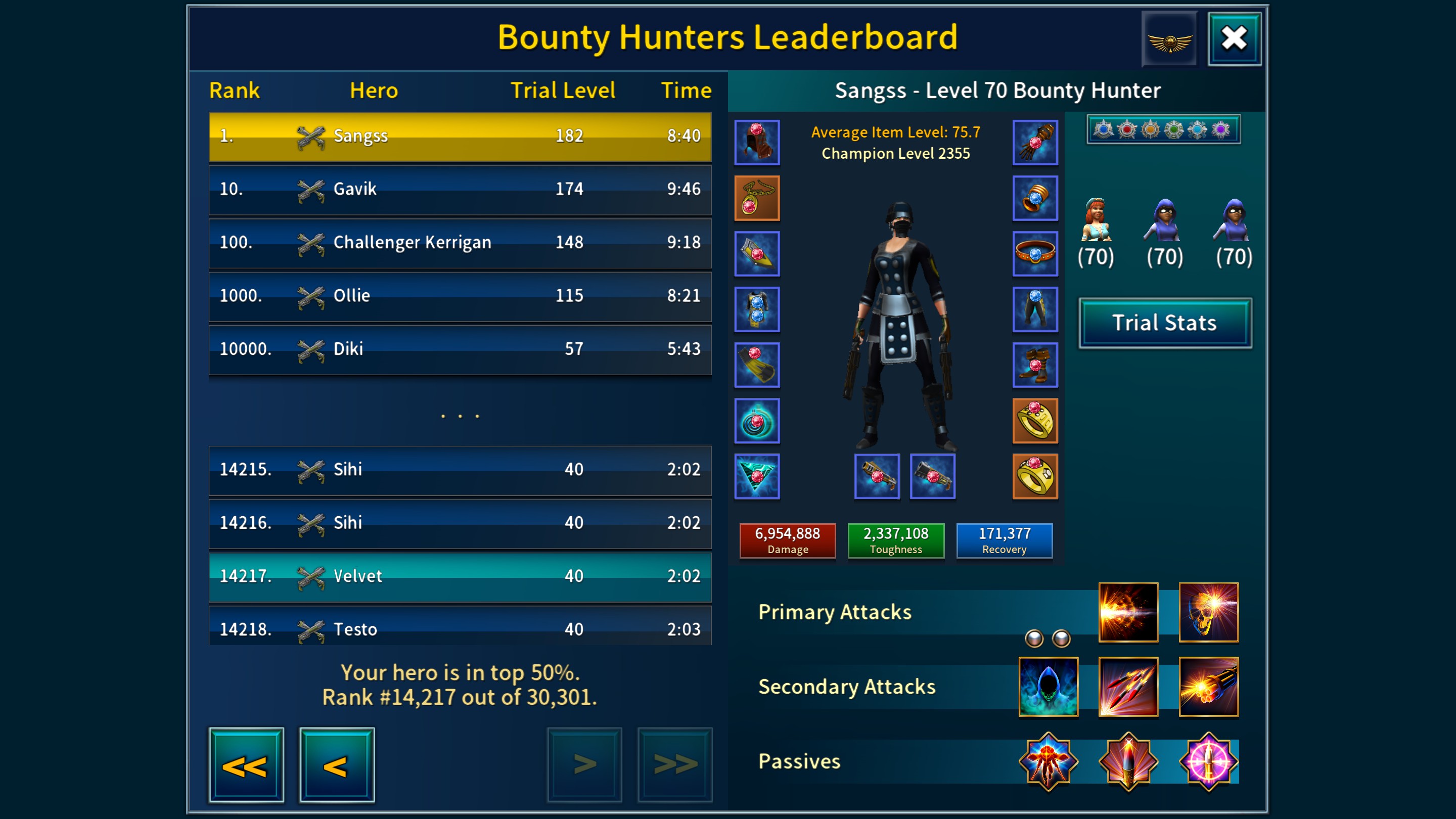 Especially for beating trials you will need better items and the perfect team. Better items mean you have to craft set items. But that topic requires its own tutorial…


At this point, I want to mention the champion levels. Once you reach level 70, progress does not halt completely. You can reach additional champion levels hat are counted separately and make you stronger. 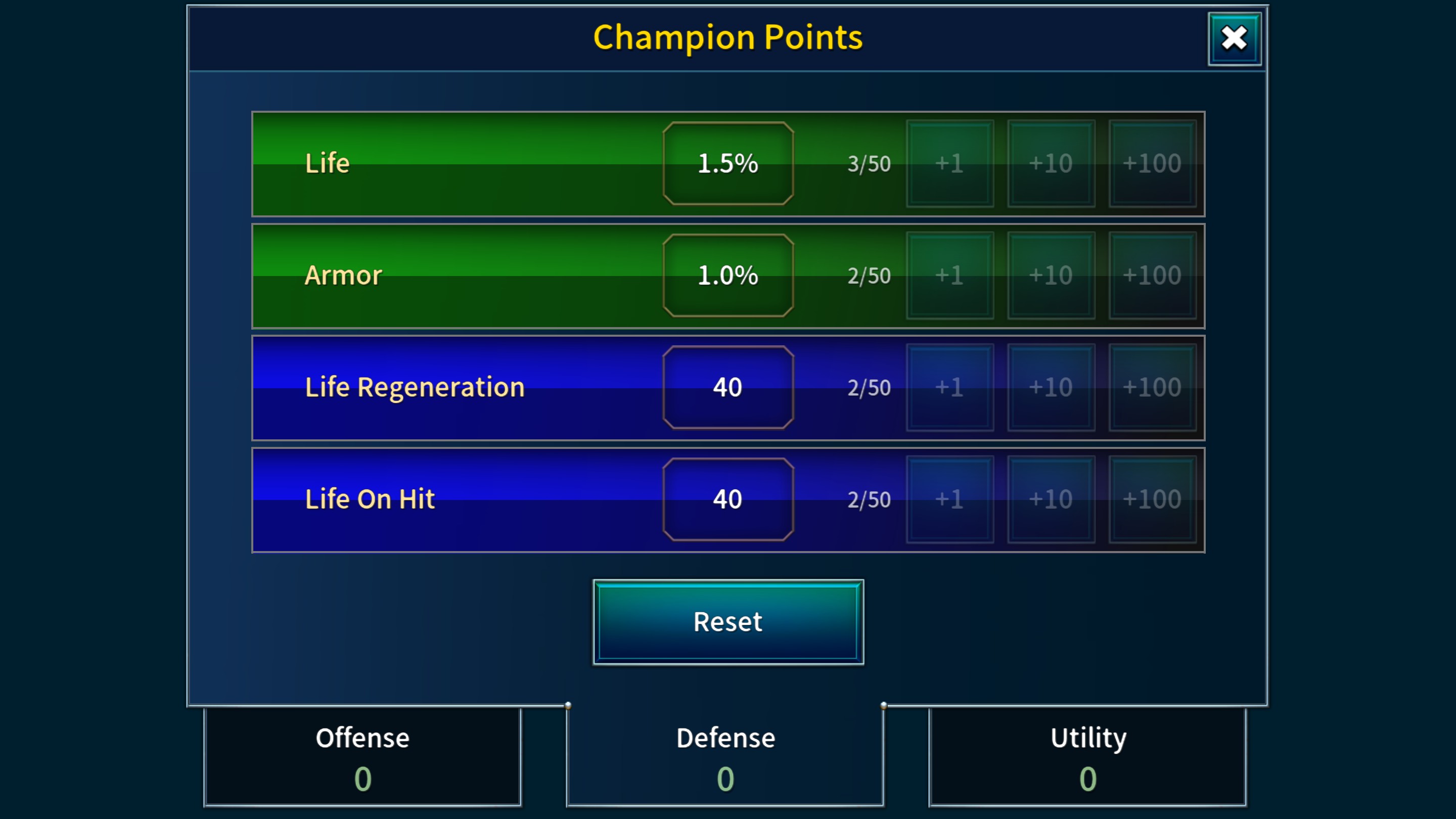 You should never pick up gold or items. Once a map is finished, everything will just fly into your inventory. Just wait a few seconds before entering the town portal.


In the settings, activate fullscreen and all Start Auto Attack and Resume Auto Attack options.


There is a daily reward for simply logging in. So even if you don’t plan to play, log in and clam that reward! 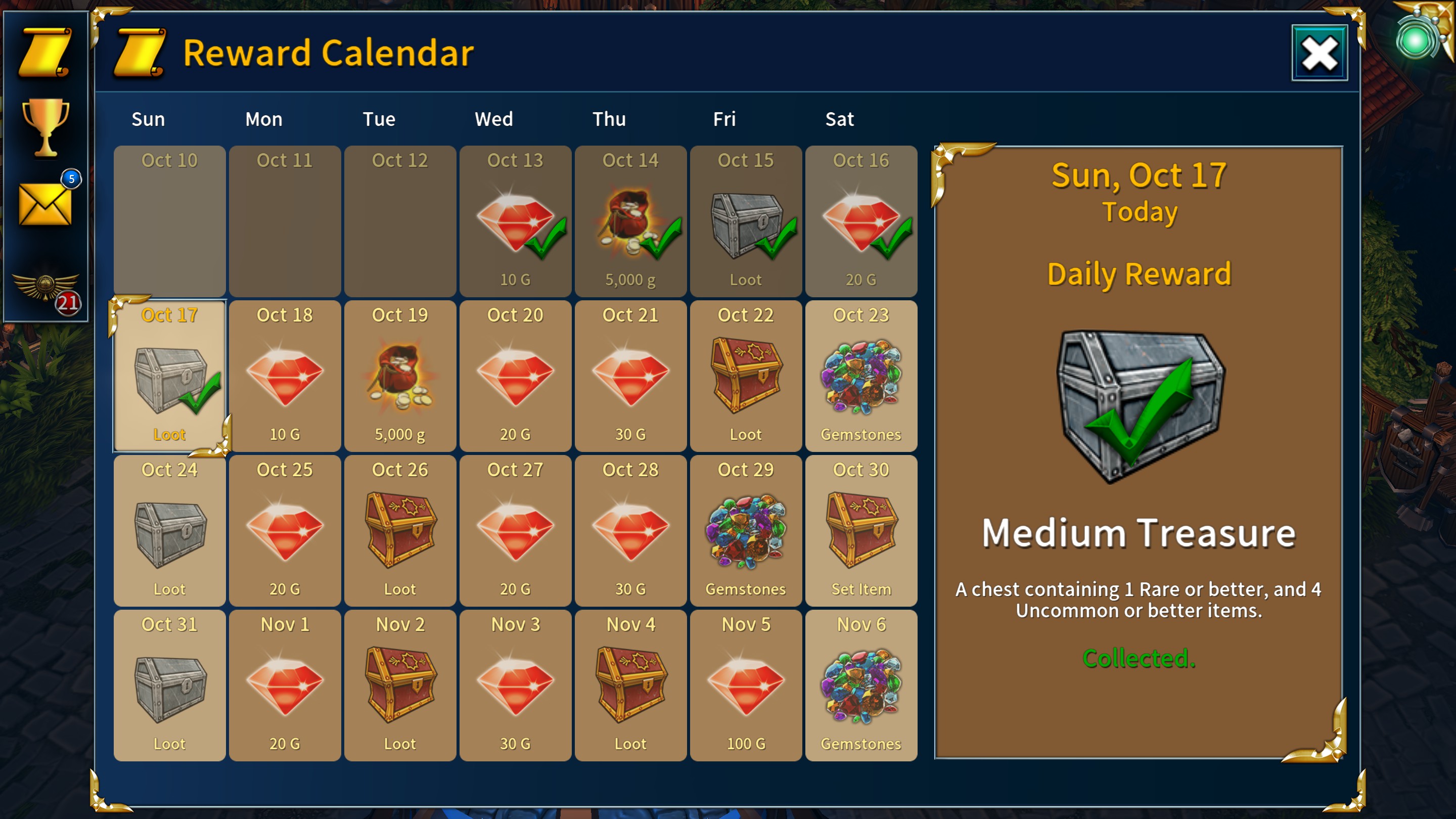 Your stash, champion levels and crafting knowledge (recipes and levels) are shared across your characters. Once you have beaten the game, all new characters will profit from that.


If you cannot beat a quest or trial because you always die with one hit from a boss, try to replace all gemstones in all your items with gemstones that give you additional hit points. Sometimes, that is the small boost you need. In order to progress quickly, the default socketing should be focused on additional damage.

I hope you enjoy the Guide we share about Eternium – Leveling Basic Tips & Items List; if you think we forget to add or we should add more information, please let us know via commenting below! See you soon!