Farm around ~250K runes per hour by completing this quick 18 kill loop. Quick and easy for those around level 40-80 looking to grind into the stratosphere. Annihilate the hideous Vulgar Militia just north of the Farum Greatbridge grace site in a 5 minute loop. 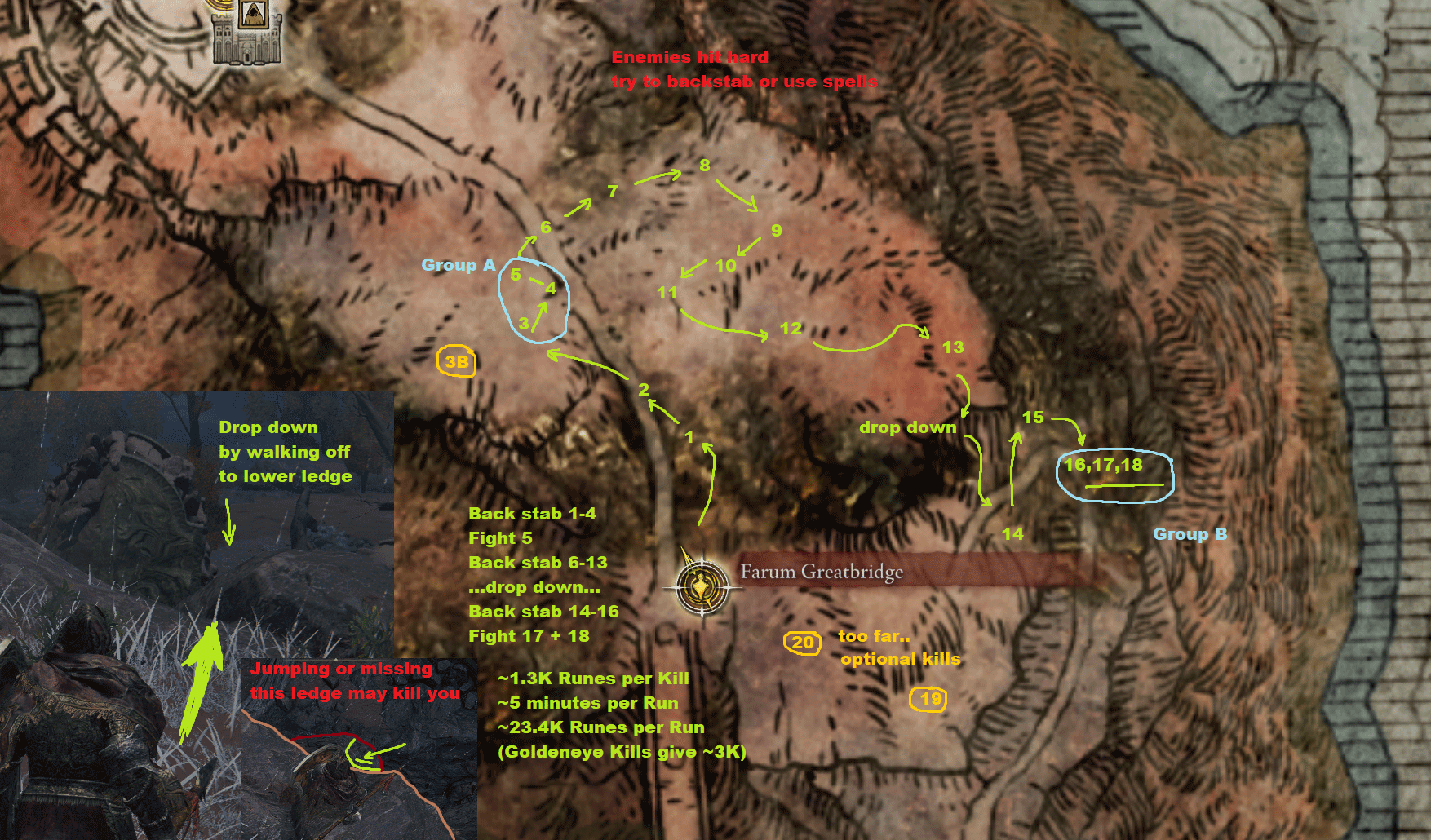 
There are roughly 18 Vulgar Militia spawns and takes about 5 minutes to complete at level ~60 using a ~40 strength build with Partisan at +12 and Great Shield at +6. This route is best for melees but will likely work well for casters too.


Most Vulgar Militia mobs can be back stabbed and quickly finished if they are not one-shot. There should be plenty of room to sneak around and back stab most targets. It’s worth using AoW or fast casting spells to quickly take down engaging targets because these militia are no joke! That said, its best keep your health topped off between fights to give yourself the best chance of not losing any runes or time.


Is it coincidence that the starting grace site sounds a lot like “Farm Greatbridge?” 😉

You’ll drop to a lower ledge after target #13. In most cases, you’ll be able to run or walk off the cliff without taking fall damage or causing a fatal fall (instant death). These easiest way to do this is by walking off onto a lower ledge. Make sure you land on the right half of the ledge pictured in the map above. If walk off on the left you will slide and continue falling which may be fatal.

By level 40-80 many of you will be pretty comfortable taking on groups of enemies. Regardless, below are some strategies and notes for taking on the tough groups. Almost all of the targets path or wander in a small area so, use your discretion when engaging these enemies. The trio in Group B do not wander and keep the same formation unless disturbed by sounds or nearby combat.


Targets #3, #4, and #5 may engage together but often wander in different directions exposing their behinds. Targets #3 and #4 are often close together and


Target #15 can be difficult to sneak up on because he is often hides behind a large tree root. He can path near the trio of #16, #17, and #18, so you should jump over the tree root and engage before fighting that trio.


The final group is a three pack and can be very dangerous if not approached with caution. Target #14 may path too close to #16, #17, and #18 causing the entire group to engage. Slapping a nearby tree may get the attention of #14 but also may cause the group to turn and search for you. If #14 is too close to the trio, take out #15 first and #14 may path away from the group on his own.


When engaging targets #16, #17, and #18 in group B, if you can one-shot with a back stab, then take out the middle target first. You will have iframes (invincibility frames) when back stabbing and the initial assault from the other targets should be avoided. Quickly retreat by sprinting away from these remaining targets and prepare to fight head on. Rolling away will leave you too close and their follow-up attacks may connect so be sure to create distant by sprinting.

Dove into some exp per kill numbers and here’s what I’ve found. Stealth kills gave roughly 30% more runes than normal kills. I did not consider the bonus foot you can get randomly which only give about 10% of the foot bonus. So, if you’re seeing smaller numbers with a foot buff, it may be because of this.


Also, I’m still relatively early in the game and do not have a golden scarab. But you can extrapolate the numbers by adding 20% and that should give you your golden scarab runes. 🙂

Table below shows runes per run assuming only 18 kills per run. I found that if I popped a chicken foot at the start of a run it would last to about the 9th kill which is about half of the run time. Further, due to the randomness of enemy movement let’s say if you’re trying to push a 5 minute run time, then that cuts your runes from stealth kills in half.

If a run is on average ~5 minutes long you can get about ~12 runs per hour.

I hope you enjoy the Guide we share about ELDEN RING – Farming Tips for Vulgar Militia Route 250K Runes; if you think we forget to add or we should add more information, please let us know via commenting below! See you soon!