The first victory type is Domination. To achieve victory through domination, each of the other three factions must be eliminated from the game. There are two ways to do this, either by destroying their capital city, or assassinating their leader. Destroying the capital is simple enough, although it takes a large army to do so as the cities themselves have defenses and the faction will likely bring every available unit to fight you.


Alternatively, you can assassinate an enemy leader. To unlock this option, you need level 2 infiltration in all of general espionage areas, and the faction itself. Then you will unlock a several part mission that at the end will allow you to eliminate the faction’s leader. 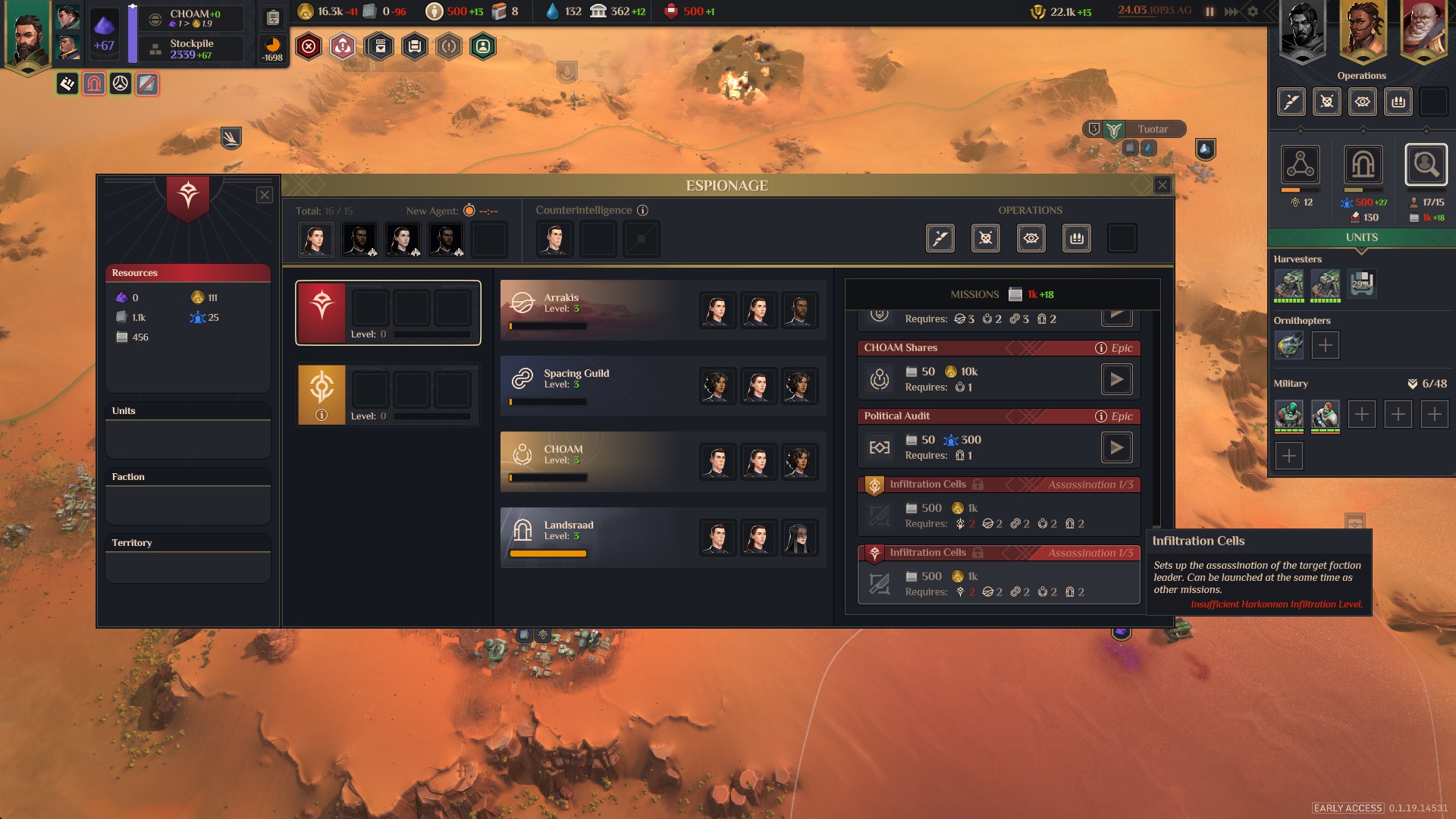 Good Factions for this Victory Type:Fremen and House Harkonnen are good choices for the straightforward base smashing subset of this victory. The Smugglers are the best choice for using subterfuge for assassinations as they have easy access to the agents and influence necessary to pull it off.

This victory type involves the use of the Landsraad. Once the prerequisites of the Dune Governorship charter have been met, it can appear as one of the three choices in each voting cycle. You will need a large amount of influence and votes in order to be elected, as the other factions will also be trying to obtain governor if they meet the conditions.


Once elected, you have to maintain the post for 60 days, after which you will win the game. There is a choice for voting that could show up that removes all charter owners. If you lose this vote, you will no longer be governor and will have to win the seat again, and the timer will be reset. Overall, this is a pretty easy victory if you focus it, and it was my first victory as I played House Atreides. 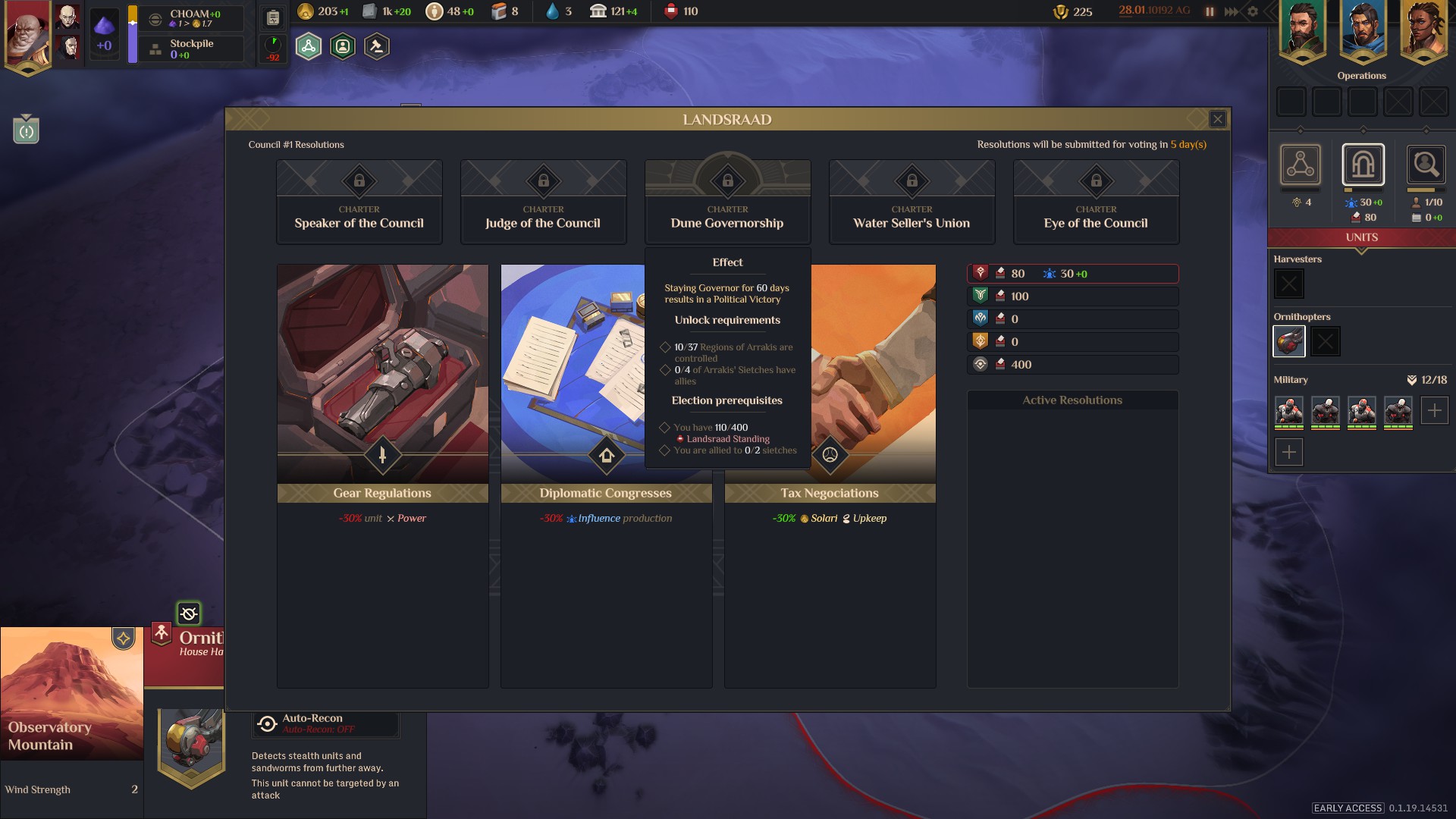 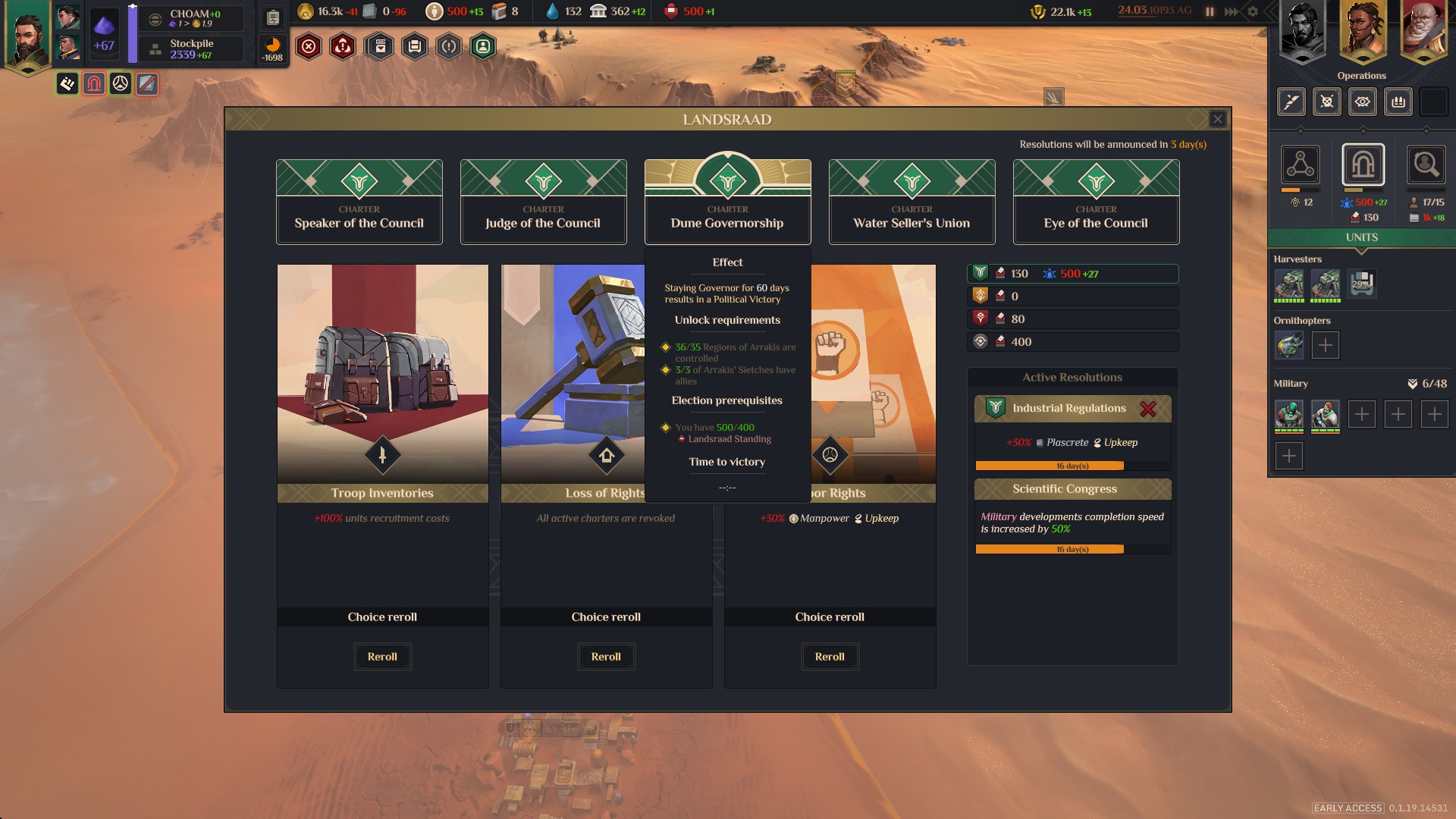 Also, the Fremen and the Smugglers can still achieve political victory, though it will be harder since they will have to rely on influence to win the votes.


Good Faction Choice for this Victory: House Atreides is the best choice for this victory type, as they have easy access to lots of influence to win votes and one of their faction bonuses once you’ve reached a high enough hegemony is to ignore personal conditions for the Charters, except for Landsraad standing.

The third victory type is Hegemony. To win a Hegemony victory, you must be the first faction to reach 25,000 Hegemony. Hegemony is a resource that you acquire throughout the game for performing certain actions. There are also buildings the you can construct that give you passive hegemony per day. Each faction gets bonuses from having certain levels of Hegemony, so even if you aren’t going for this victory it is important to acquire it for these bonuses. 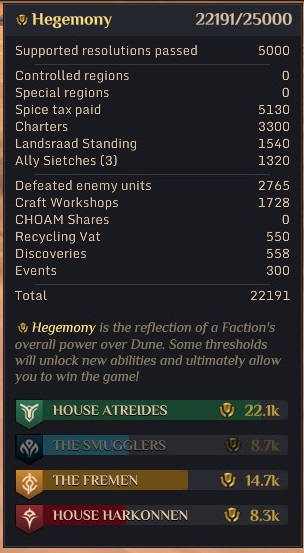 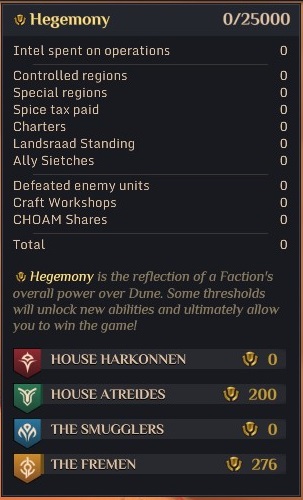 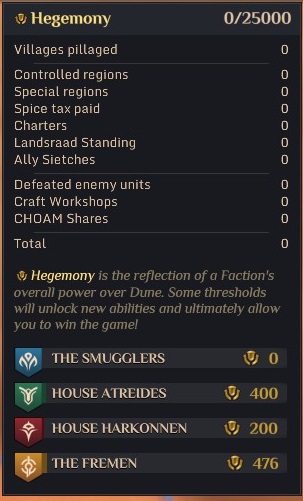 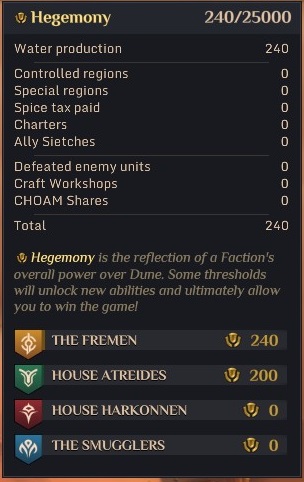 Good Faction Choice for Hegemony Victory: Hegemony victory is essentially the default victory type. Each faction has their own unique way to acquire hegemony besides the shared list, so every faction can go for this victory, even if they are weaker in one area like the Smugglers with military. So, pick whichever faction you like for this victory type.

This is all about Dune: Spice Wars – All Types of Victory & Faction; I hope you enjoy reading the Guide! If you feel like we should add more information or we forget/mistake, please let us know via commenting below, and thanks! See you soon!