So you’re the chef. You’re running down the icy plains searching for meat. You tell the hunter “Oi, help me get some meat for tonight’s stew”. The ♥♥♥♥♥♥ replies “♥♥♥♥♥♥♥ get your own meat”. Easy. You found him. Tzu says it right…

Funny Story. Anyhow. Check the sections for identification tips. Hope the humour wasn’t too boring for you turbo nerds. 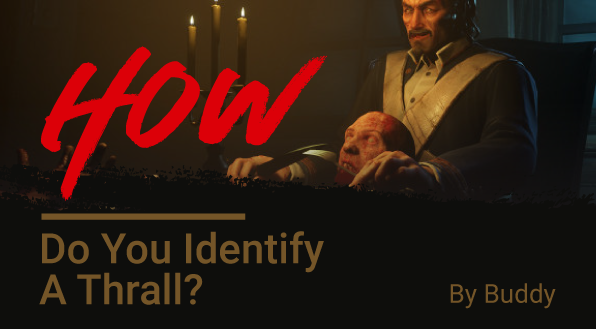 When you’re not a Thrall, you have to contribute. Contributing according to your role is the best way. However it’s not a strange occurrence for speed-runners to just do the task of (example) the engineer and collect coal for the boiler. This is generally a good thing to expect of others, despite their roles -they should contribute with either food, coal or useful tools. Contribute anything a Thrall will toss in to the ocean.

Suspicion & Scepticism should always kick in when somebody strays in to the far mist of the ice plains for minutes, and upon return they contribute nothing. Thralls generally try to get the best loot ASAP, unless they want to blend in. They will seldom scout far to plant totems too(which empowers their charm abilities).

So generally speaking, use the following thought gymnastics to identity thralls(or come to troubleshoot ‘who’s the Thrall’):

This general section will be updated more. Just waiting for my covid to cure.

Hope you enjoy the Guide about Dread Hunger – Tips on How to Identify Thralls in Dead Hunger, if you think we should add extra information or forget something, please let us know via comment below, and we will do our best to fix or update as soon as possible!