Distant Worlds 2 dont tell about many things in term of weapons and ship behaviour. Those are pretty crucial mechanics in term of ships designing, plus I will share some tips with ships design.

With already 70 hours of playing behind me in DW2, I decided to write my first ever guide on steam about stuff that game itself dont say to players and which I was testing for last few days. I think those mechanics/tips should be know for every player who like to design their military ships.


With time I will try to update this guide, add more things or edit existing tips/mechanics if those will change.


Please have in mind that my english isnt my native language and isnt at the best shape. 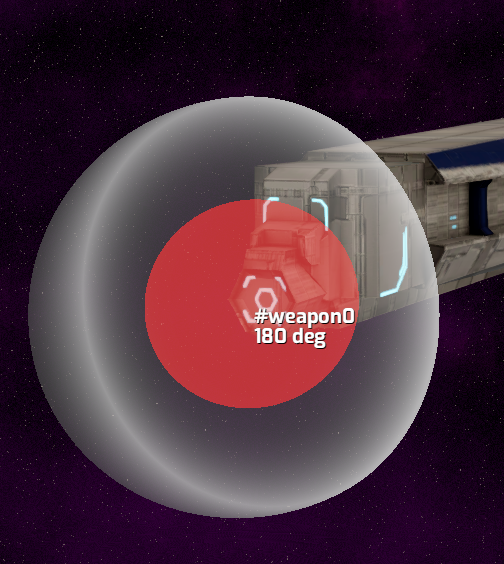 Every weapon slot is showing you in what arc/degree weapon will be able to shoot, but what game isnt tell to you is that all ‘seeking’ type weapon have 360 arc of fire no matter in what slot you will put them.


For example if you will put missile weapon in slot on back of the ship with 45 arc of fire, it will be able to shoot at targets in 360arc around your ship. So if your ships have any 360degree weapon slots, dont waste them on ‘seeking’ type weapons, put there weapons with direct fire like rail guns or laser beams or point defence. 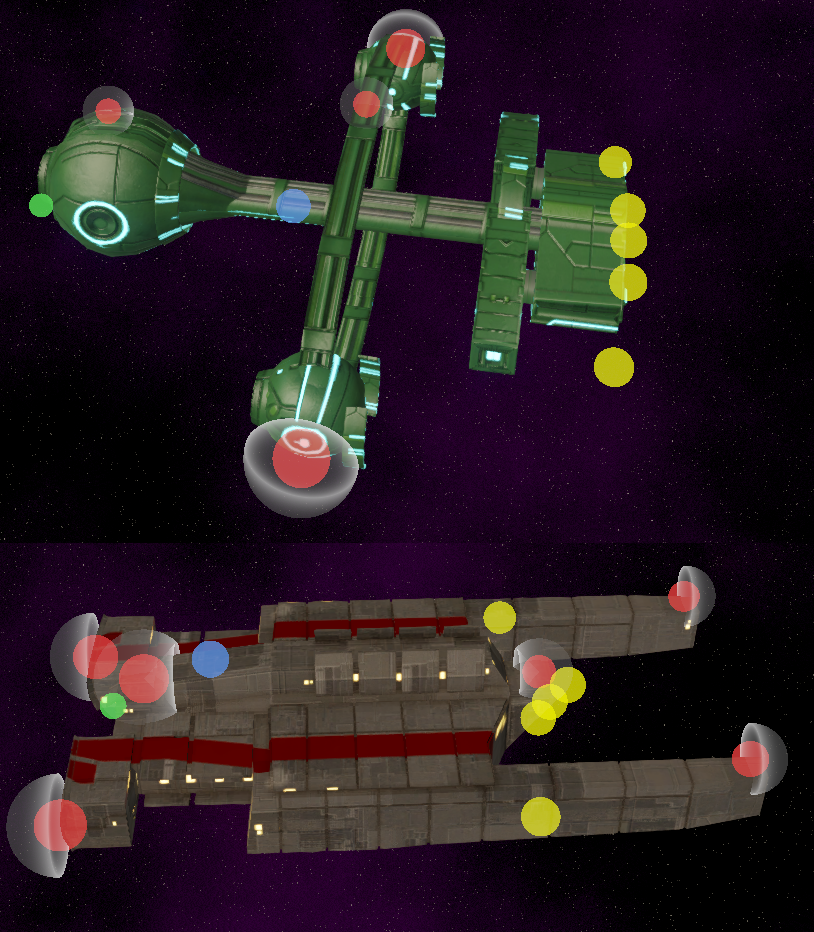 
This is only one example and with weapons slots only, you already can see that Mortalens can have 50% higher fire power than Harkonish one, but there is something else I want to show. 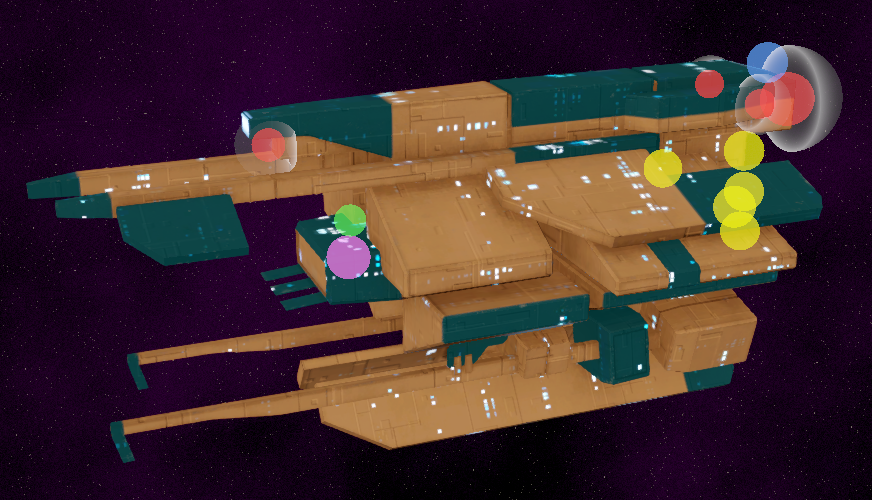 What is point of that, you might think, but there is something else with this frigate, do you see purple circle at front of ship? It is slot for HANGAR, this slot is there for all frigates hulls for Teekans, that means you can deploy strike craft without access to bigger ships. Most races get first ship slots for hangar with unlocking Destroyers, but Teekans and Ackdarians have already one slot for hangar on their frigate and even more ontheir destroyers, which makes them really strong strike craft users. Meanwhile races like Boskara or Harkonish dont have any slots for hangar on their destroyers, their first ships with slots for hangarare cruisers which means they cant deploy any strike craft with ships in early game.


So have in mind that every race in DW2 have different aproach to warfare due to how their ships hulls. If you want to have big amount of front guns, choose mortalens, if you like deploying swarms of strike craft, choose Teekans or Ackdarians.

Most of you might know that stations have increased cargo capacity, but how much? Here I used only one basic cargo bay on small space station.

How to avoid losing ships?


I see many peoples complaining about their low tech automated ships suiciding into space monsters or pirate stations. I’m not sure if there is way to stop them doing this without disabling automation, but I know how to drasticly increase chance of survival for those suicidal ships. I myself playing with automated military ships/fleets, they can work if you will make sure that you have good setting of their automation. 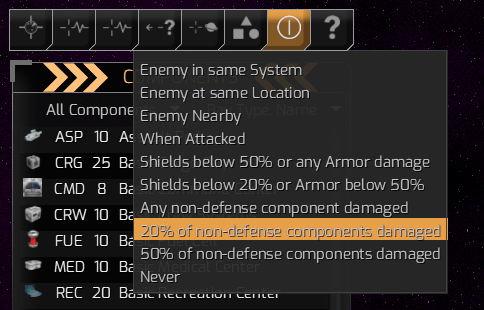 Game by default sets all military ships to retreat when 20% of non-defense components damaged, for early tech ships and specially for escorts its means that they will kill their enemy or die. All early ships have weak defenses, early hyperdrive need 20 fricking seconds to enter into hyperspeed, so this is IMPOSSIBLE for any early escort ship to survive 20 seconds after they start getting damage to their non-defense systems + there is very high chances that next shoots will damage hyperdrive component itself disabling it…


What I do for my early ships is setting this option to ‘retreat when shields below 50% or any armor damage’. Early ships they dont have any chances with monsters or pirates with straights fight, so force them to use hit and run tactic. With that setting ONE alone of my early escort ships was able to kill Gravillex(white dwarf) by attacking it, retreating for repairs when hitted once, then attacking it again, repeating this process until monster died. Slowly my escort ship was able to kill it without dying huray!(but sometimes it was pretty close, it is after all pretty RNG).

How to stop my ships from charging at enemies to close range?


I see peoples asking or complaining about this too, but there is setting that fix that feature too.

Describe for all stances:

Evade: the ship will attempt to remain out of weapons range of the enemy target(great for long range carriers and support ships)

Cautious: the ship will select an attack range inflicts some on the enemy while minimizing damag eto itself from the enemy(great for long weapon ships, this means that ship will stay at range of it longest range weapons)

Neutral: the ship will select an attack range inflicts the maximum damageon the enemy while avoiding excessive damage to itself from the enemy(ships try to shoot al their weapons and try to maintane some distance)

Agressive: the ship will select an attack that inflicts maximum damage on the enemy with little consideration for enemy damage against itself(ship will just straight charge into enemy to be able shoot at them even with point deffence weapons without even think that they will enter into range of enemy close range weapons. Great for suicide ships…)


Most ships by default are sets to be agressive vs weaker oponents and neutral against stronger. Have this in mind when you creating long range kiting escorts or frigates. If you dont wanna ships charging at enemy, make sure that your ships dont use agressive or sometimes even neutral stances(depends on weapons you use). 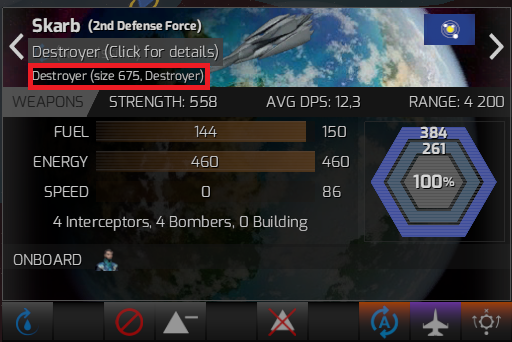 Why my ships/fleets trying to automatic repair/refuel/retrofit themselfs even when I set them on manual!? It is annoying!


I saw many peoples complaining/asking about this, there is reason why their ships was trying do those things on their own even when they was set on manual. 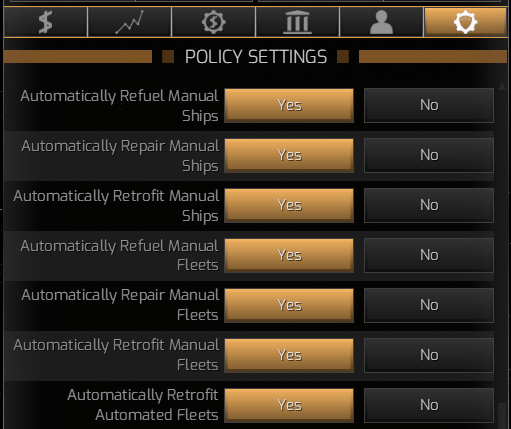 Here you can see automation option under ‘Military’ section. All those by DEFAULT are set on ‘yes’, which means your ships/fleets will try to refuel/repair/retrofit themselfs automatically, if you dont wantyour manual ships/fleets them to do so, just set all of those setting to ‘no’.

How to focus fire? 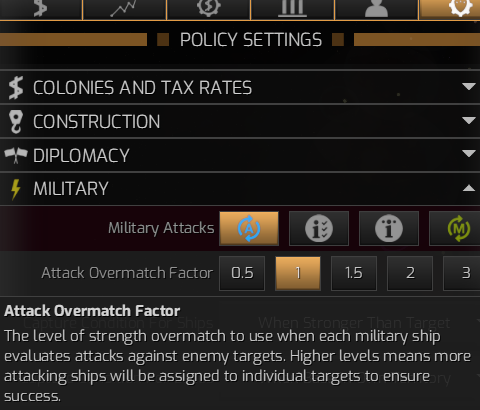 This automation setting is all about automated targeting system during fleet battles. At higher levels it will means that more your ships will focus one enemy ships, increasing chances that it will be destroy before retreat, but lowering any chance of succesful capture. Meanwhile at lower level of this setting your fleets will spread they firepower at more targets, giving enemy higher chances for retreat, but creating oportunity for your ships to capture enemy ships.

Automated ‘Troop Recruitments’, yes or no?

I saw many posts on forum recomending for new players to turn off automatic Troop Recruitments argumenting this with amount of money troops need to upkeep. I say no, do not disable troop recruitments automation, it is really important o leave it on automated or you will forget about recruiting them and enemy empires will blitz/snipe your colonies with weak or without any garrison. Remember that invasion on planet can start at any moment, even during biggest space battle, enemy troop transports can rush to planet to suicide deploy their armies or even start bombarding planet when under fire from you fleets/deffense station. So far I saw many peoples complaining about that, ‘invasion are too fast’, ‘enemy invasion fleet appear from another side of planet and my fleet was too slow to intercept them before they start invasion’ and etc…


First let me started why it is so important to leave automation ON and how important it is to have troops on planets. 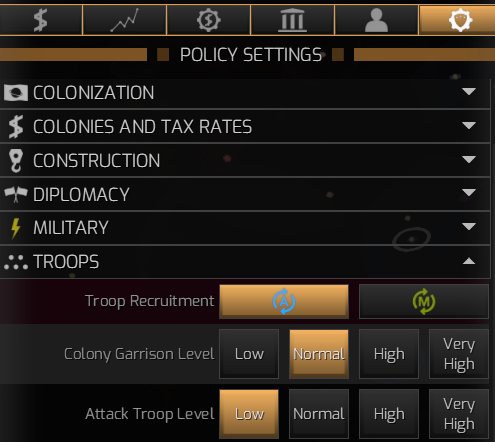 No matter galaxy size, with every stage of game there will be more and more planet to control or conquer, it isnt easy task to remember recruiting at moving troops between all your planets and to recruit them enough to have proper invasion forces(late game you really need big invasion forces or proper exterminatus tools). Just remember to have good balance between garrisoned and attack 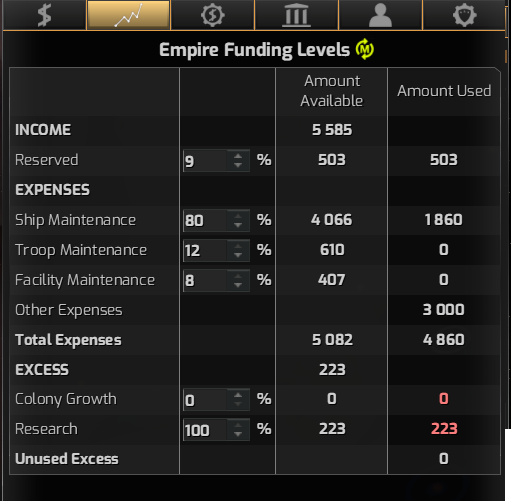 Let me explain every table:

‘Amount Available’ is amount of cash you getting from 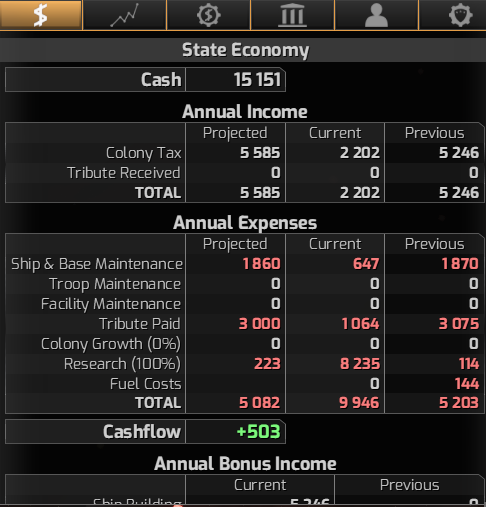 ‘Amount Used’ is amount of used cash, remember to never using more cash that you have available, always have some excess to spend them on Colony Growth(boost to population growth) or Research Bonus(more research).


Reserved: Amount of Annual Income cash that always will go to your pocket.

Ship Mainteance: Amount of Annual Income cash that should be spend on ships and stations mainteance.

Troops Mainteance: Amounf of Annual Income that should be spend on troops.

Facility Mainteance: Amounf of Annual Income that should be spend on planetary facilities.

Other Expensive: Cash you spending on things like pirate protection and etc…


Important thing about all this setting is that they are not used by you(player) but by automation system. So if you have automated troops recruitments but you have expenses on ‘Troop Mainteance’ set at 0%, automation will never recruit any troops because they are set to spend 0% of income at troops recruitment and mainteance. So what I recomend is just set it at 0 or very low % at start of the game and slowly increase that to max 20-25% in late game. Automation will try to keep mainteance

at level you set, sometime lower but never higher, but remember that they will not disband any unit even if you lower their budget(at least for now this patch).

This is all about Distant Worlds 2 – Hidden Mechanics for Ship Designs; I hope you enjoy reading the Guide! If you feel like we should add more information or we forget/mistake, please let us know via commenting below, and thanks! See you soon!