A history of major changes to the game.


In game, there is now a timeline. Each “unit” of story, such as a DLC or a season, has an associated icon. Items and quests added at those times usually have the associated icon somewhere on them. This is often the only way to tell which quest is associated with which DLC or season pass. The timeline will tell you what, if anything, you have purchased, and gives a brief story summary. 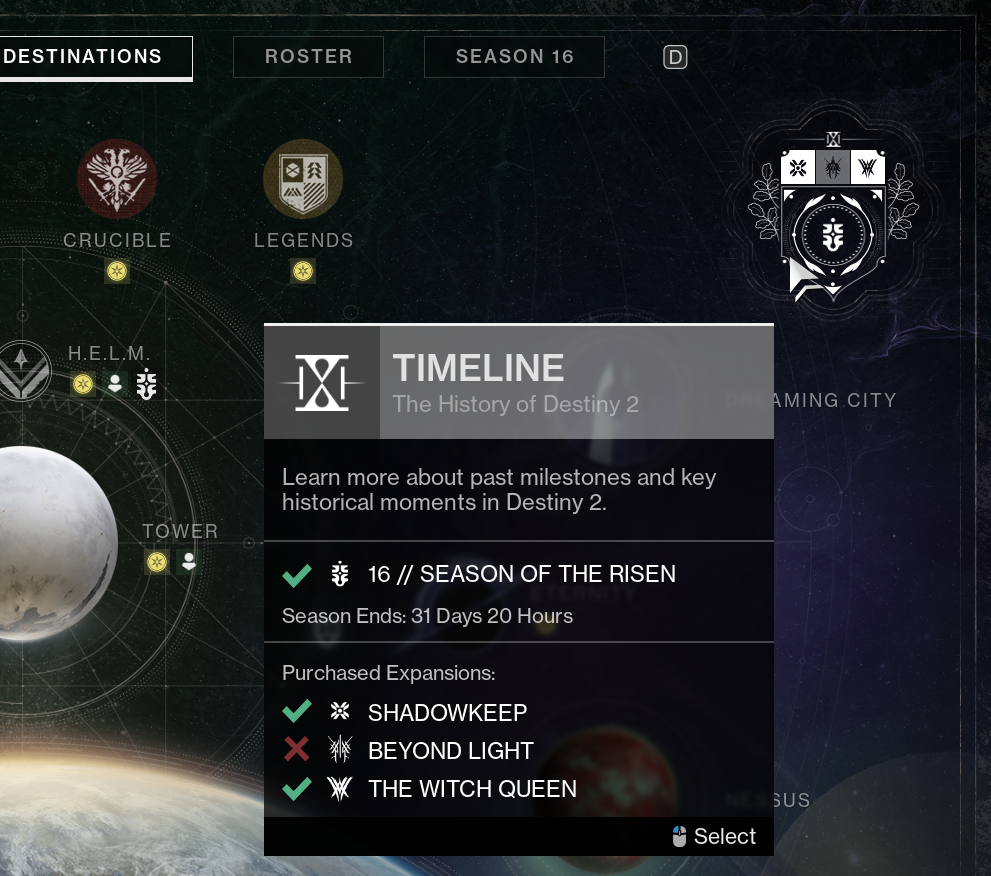 I do not own Beyond Light. Left click to view the full timeline with a story summary.

New as of Witch Queen release.

After completing the first 2 Witch Queen missions (available free), you can access free roam in the Throne World and Enclave. The Enclave has a chamber where you can craft weapons after you have unlocked weapon patterns. See the Collections tab for your progress on unlocking weapon patterns. Some weapon patterns are paywalled. 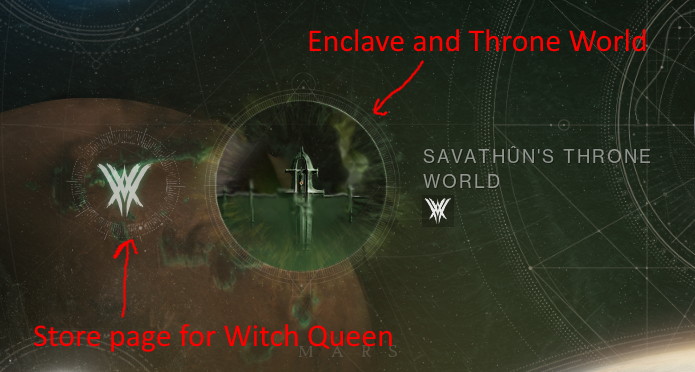 Some players think weapon crafting is paywalled, but they are actually clicking the wrong icon when trying to go to the Enclave.

The three light subclasses are gradually being reworked to be far more customizable, like Stasis. They are going one by one, and this is when Void was reworked.


You can purchase some extra Void abilities from Ikora for glimmer.

Initially called Orbs of Light, later called Orbs of Power, these used to come from super kills/usage and from killing 2 enemies in quick succession with a masterworked weapon.


Now, masterwork weapons don’t make orbs. Weapons generate orbs based on mods that go in your helmet. These mods were granted to all players so there is no need to farm for them.

Played after Beyond Light but before Witch Queen?

Owners of Beyond Light have access to the Stasis subclass.

After Beyond Light’s initial release, a variety of weapons in the kinetic and heavy slot that deal stasis damage were added for all players. These can make bounties/quests to get “kinetic” or “kinetic weapon” kills behave strangely, because most of the time they do not count as kinetic even if they are in the kinetic slot.


It’s a good idea to have a variety of weapons and at least each element available, but only stasis subclass wielders can make use of certain features on stasis weapons, such as the Headstone perk.

The Strikes playlist has now been renamed “Vanguard Ops.” Some season pass activities, Battlegrounds from Season of the Chosen, were added to the playlist. Players still refer to them all as strikes still, but the game often uses the term Vanguard Ops.

This is some sort of pocket dimension associated with the Nine. It is where Xur lives when he is not appearing on weekends to sell exotics. Functionally, the Xur in Eternity and the exotic selling Xur are basically different NPCs, even though technically it’s the same person. All players can do Dares of Eternity, a 6 player pve activity, here.

Played after Shadowkeep/Steam release, but before Beyond Light?

As described in the last section of this guide, if you did not manually migrate your Battle.net – [Battle.net]  Destiny 2 progress to Steam, it has all been lost and if you return, you will be starting from scratch.

On any character that has completed the “tutorial,” you will be placed in a current new mission when you first start up the game. Right after a major DLC release, this is the first DLC mission. After that, it is the first season pass mission. To continue these campaigns, you would need to pay money, but completing these first missions unlocks essential parts of the game such as free roam destinations, and champion mods. The season pass ones give loot that is normally paywalled. You can leave at any time by taking out your ghost and going to orbit(default on PC is tab > press and hold O). You can return to an incomplete mission later.

This is the start of content vaulting. The stated reason was that the Destiny 2 file size is getting too large, and having to test and bug fix each new piece of content with a greater and greater amount of old content was taking more time and effort, so to cut down on file size, development time, and bugs, and increase the speed of bug fixes and new content development, Bungie decided to periodically cull older parts of the game. News of an upcoming “vaulting,” meaning upcoming content removal, gets announced a few months in advance.


With Shadowkeep’s release, the Red War, Curse of Osiris, Warmind, and the Annual Pass were removed. Some areas and assets may appear in the future, but besides that this content is all gone forever.


In the Tower, there is now the Monument to Lost Lights, a place where exotics, and ritual playlist quest weapons, go after their original quest got removed. Any item not in here can still be acquired in its original manner (or close to it), and any item in here can only be acquired by purchasing it from here.


Important note: For players planning to return eventually, each season there is one exotic weapon that is only available for free during that season. Afterward, it becomes paywalled. You can view this in the “seasons” tab of the director, at rank 1 of the paid ranks and rank 35 of the free ones. It may be worth logging in each season just to get to rank 35.

This was initially announced some time after Shadowkeep. The plan was to have an “expiration date” on all legendary items, based on when they were added to the game. Items added more than a certain length of time ago would be capped in power level, unable to be infused to higher levels. ” 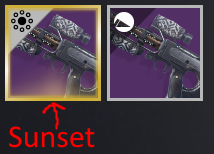 Ignore the gold Masterwork border. I dismantled all my non-masterwork sunset items so I didn’t have a better comparison.

A type of miniboss added with Shadowkeep. They have special abilities making them extra difficult to kill, such as damage resistance, self-healing, etc. which requires equipping specific mods to counter. Some exotics have intrinsic anti champion capabilities, but for the most part anti champion mods from the current Season Artifact are how to counter these.

Minibosses and bosses with a veiny red glow added with Shadowkeep. Unlike champions, they haven’t been developed any further, and only appear in lost sectors on the EDZ and Nessus as well as all over Earth’s Moon.

Played after Forsaken but before Shadowkeep/Steam release?

Most of this is gone now, but not all.

Vaulting, and What Became of Forsaken

The campaign and Tangled Shore destination were removed from the game The former “annual pass” things, including the raids Scourge of the Past and Crown of Sorrow, have been removed as well.


Rahool in the Tower now sells glimmer and materials similar to how Spider did. However, Rahool does not allow you to buy materials for glimmer.


Everything else is still there, including the Dreaming City in its entirety (including the 3 week curse cycle, Shattered Throne, Last Wish, and the various secrets and side objectives), and all the exotics. As a result, Forsaken had a permanent price reduction and its name changed to “the Forsaken Pack,” but players still commonly refer to it as Forsaken. You don’t get anything extra if you bought Forsaken before all of this happened.

If you were around for Reckoning and Gambit Prime, both of those are now removed. There is one single gambit mode, lasting 1 round. Relatively little has changed.

Destiny 2 initially released on Battle.net – [Battle.net]  and there was a window of time to migrate your account to Steam. If you did not do this, your progress from before Destiny 2 moved to Steam (Shadowkeep release, fall 2019) has been permanently lost. If you return, you will be starting from scratch as a new player.

Almost everything from before then has been either changed drastically or outright removed. The free roam destinations EDZ and Nessus, Vanguard Strikes, and the Crucible are the most recognizable.


The entirety of the Red War, Curse of Osiris, and Warmind have been removed from the game. Titan, Io, Mercury, Mars, and the Leviathan have been removed. They are gone forever. There’s no way to play them, and you don’t get anything special if you bought these back when they still existed.


Now, primary ammo is infinite. The ammo type is now tied to the type of gun, and not the slot it goes in. All guns that used special ammo on launch now use primary ammo, and many heavy weapons were turned into special weapons, including sniper rifles, shotguns, and fusion rifles. Special ammo is limited in capacity, but intermediate in damage between primary and heavy.


Most of the time, it’s a good idea to use one gun of each ammo type. I think this is a good change.


If your character does not have any heavy weapons and as a result is at an impossibly low power level, this is why. Your one and only heavy weapon was instead turned into a special weapon. If this has happened, look in your vault to see if you have another heavy weapon, or go to the Collections tab and see if you can make a copy of one you got before.

This is all about Destiny 2 – Major changes to the game Overview; I hope you enjoy reading the Guide! If you feel like we should add more information or we forget/mistake, please let us know via commenting below, and thanks! See you soon!