Our attack to “approuch” is Third Form: Blazing Universe (forward+Y), this skill is medium range and will let us continue a combo.

If hit, we’ll continue with Light Attacks auto combo, the last hit will raise Akaza to the air.

Press B (dash) to continue combo. if you dont, combo ends.

This fight has 2 parts. 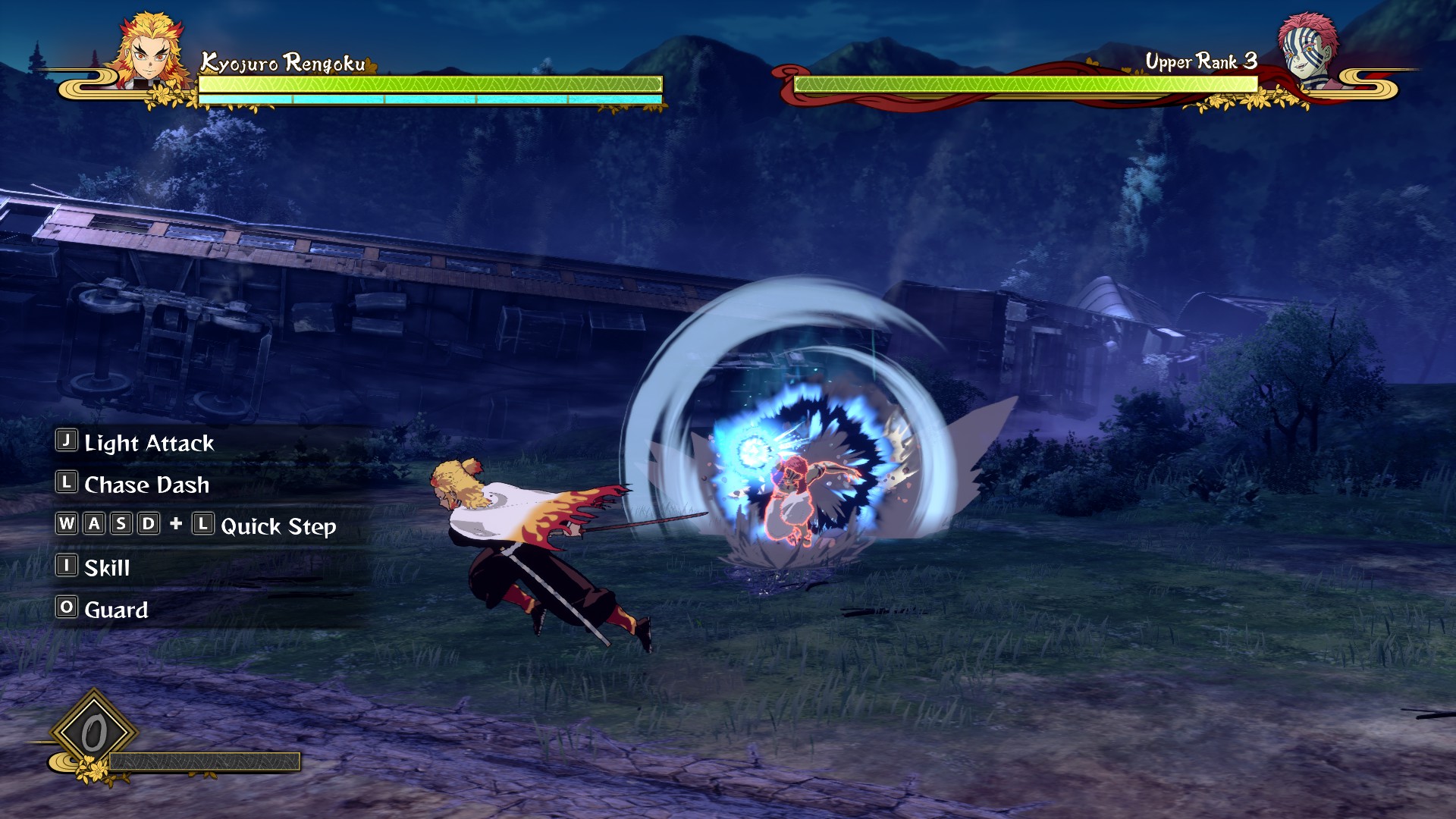 Try to keep distance. If Akaza “Simple Dash”, then dodge, start with the “Main Combo”. Use “Alternative Combo” when running low Skill Gauge. You can also try to launch combo while Akaza is just running around, if you miss, dash out his range to avoid being damaged.

Once you take away around 50% of his HP. The second part of fight with Akaza starts. Now he has more attacks:

– “Combo Dash”, it shows a Red Circle in the floor before he tries to Kick Combo.

You can only attack AFTER you dodge “Simple Dash” and “Combo Dash”, because the others have instant recovery and them will interrupt you, if you try to “approuch”. 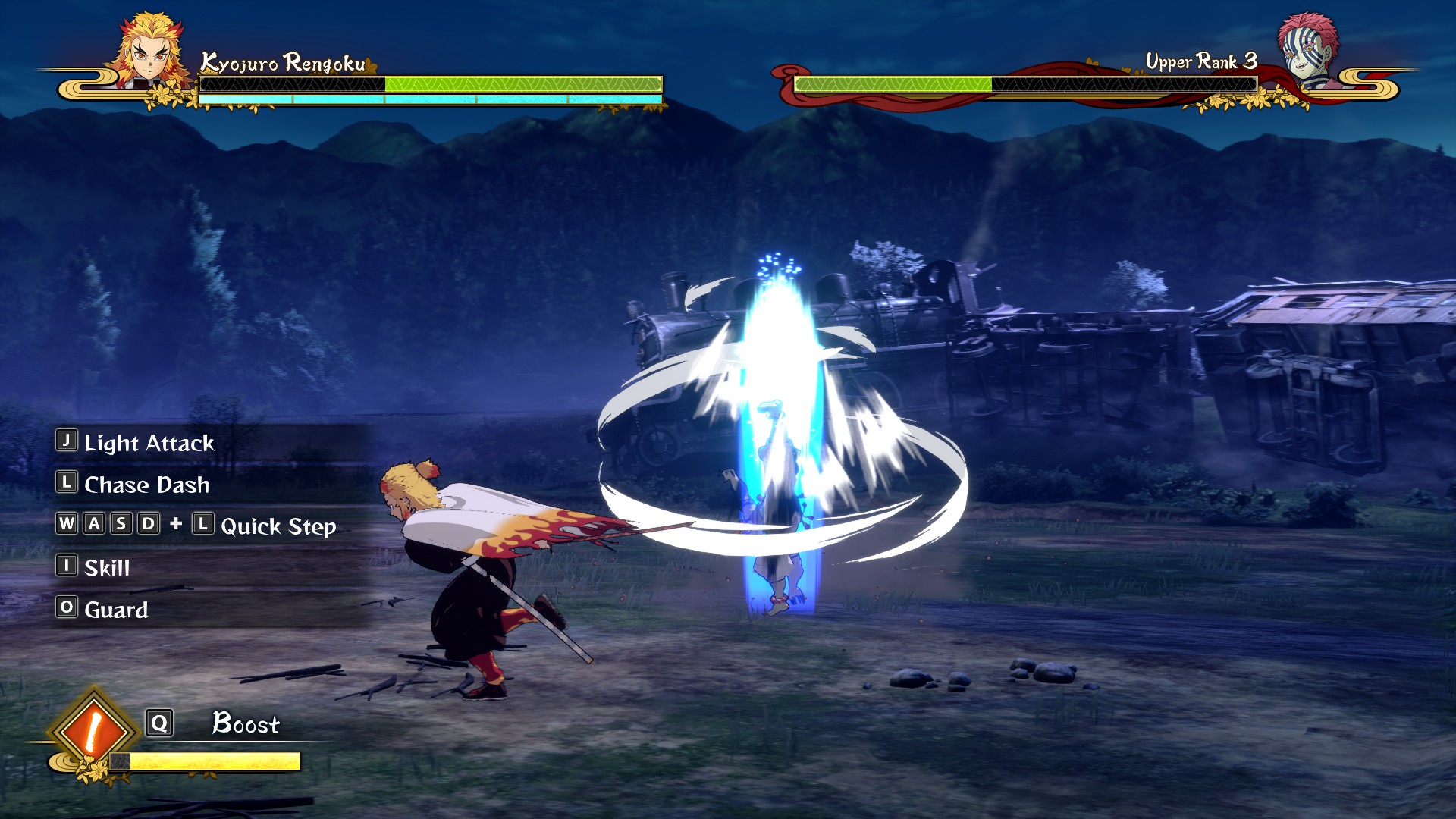 This is a very easy fight, but learning how to attack will help us with the Next Battle. 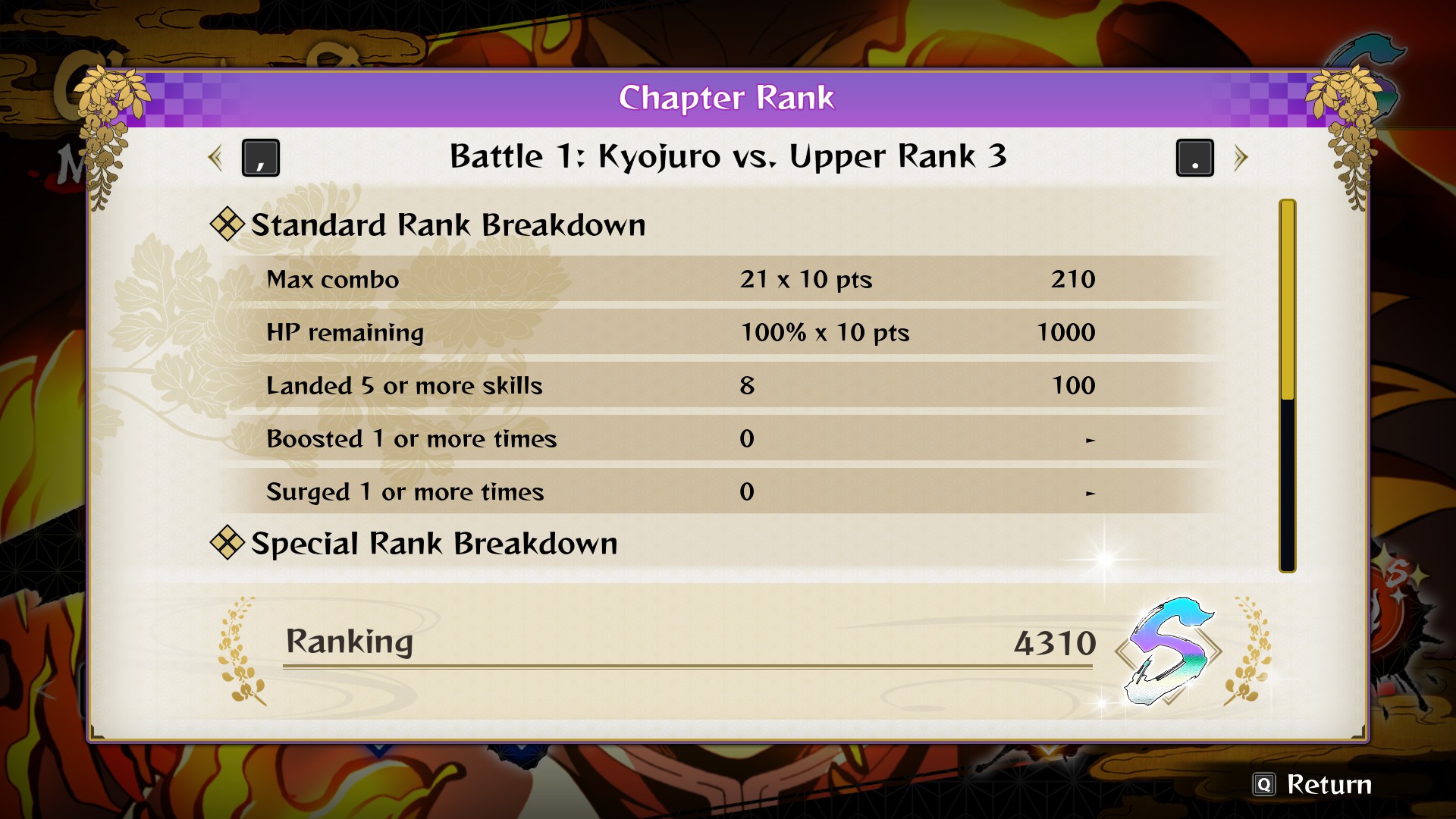 In this Fight Akaza has 2 Health Bars. Dont worry we already know the majory of his attack pattern. Is similar to the last part of the first fight, but with a Twist: Akaza can activate “Rage Mode”.

In the first HP bar (the hardest). Akaza has the follow attacks:

– “Combo Dash”, it shows a Red Circle in the floor before he tries to Kick Combo.

– “Fake Dash”, similar to “Simple Dash” but it stops to Punch you (Ora Ora Ora).

– “Rage Mode”. When Akaza enters Rage Mode his attacks change a little: has more projectiles, more range and attacks cant be interrupted (Dont attack him), This attack has a variant later in the fight: 1 second last attack after mass projectiles from air, “Aerial Fall”. So stay alert after you take away the 40-50% of the First HP Bar,

The first HP bar is the hardest. Akaza is fierce and will trick you with “Fake Dash”, while spamming “projectiles”. We only have 2 chances to hit (safest). When Akaza is doing “Combo Dash” and after “Rage Mode” ends (finish with mass projectiles when Akaza has more than 70% HP and later in the fight has 1 more attack, the “Aerial Fall” when has less than 70% HP). When Akaza exhaust after “Rage Mode” he becomes vulnerable, but you need to be fast. Akaza recover is short and will punish with “Fake Dash”, if you late. 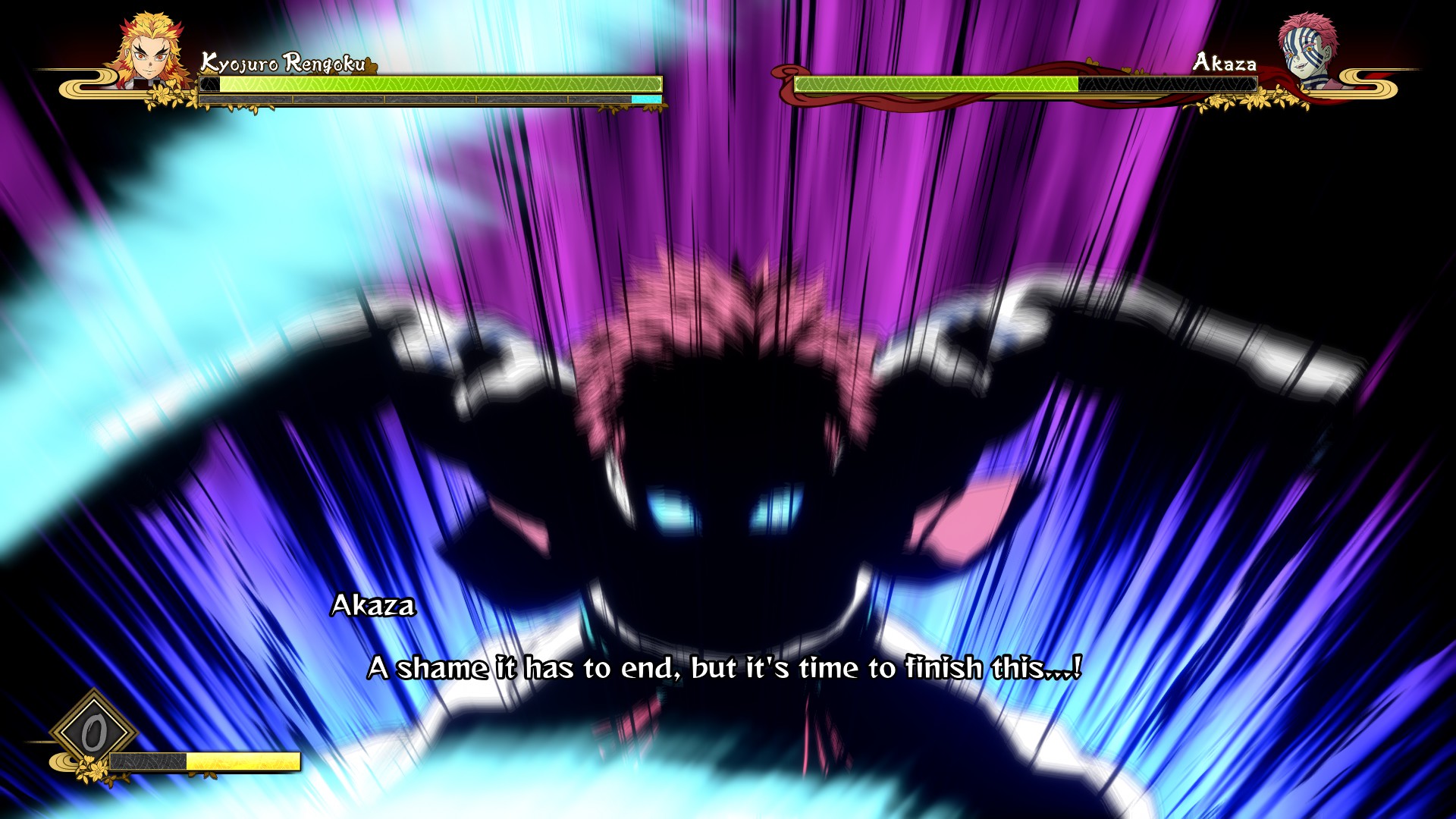 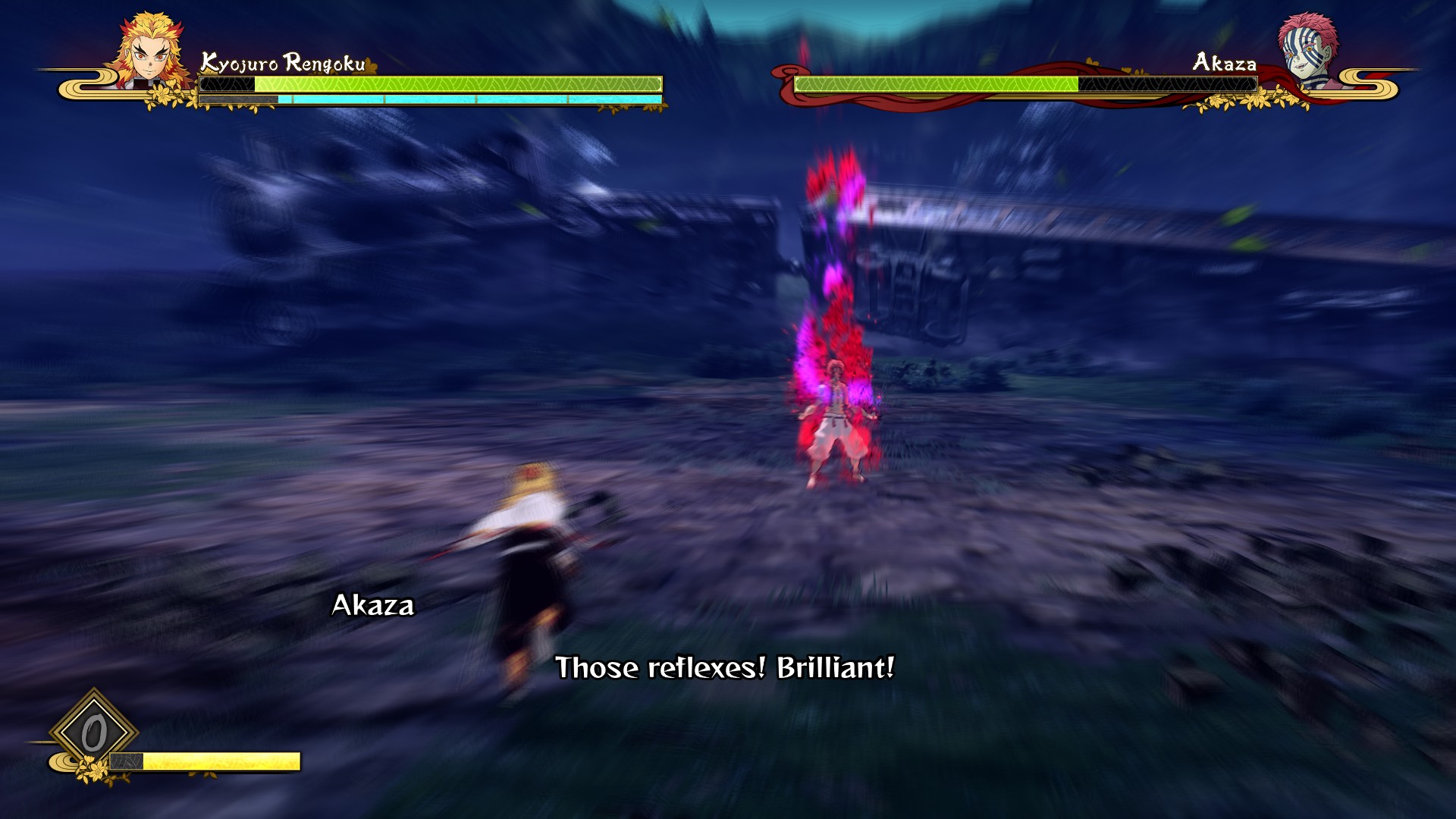 Once you take away his first HP bar. Akaza regenerate his HP and will “Fake Dash” you (Ora Ora Ora). Starting the Second Part of the fight.

Fortunately this part is easier. Akaza attack pattern consist mainly in “Combo Dash”, so we free to Attack frequently. After some combos, activate “Boost” to increase Attack to finish him off fast. Even if Akaza enters “Rage Mode”, you already know the attack pattern, just watch out with Akaza’s extra attack during “Rage Mode” (“Aerial Fall”).

Once Akaza reach the mark. You are asked to do Quick Time Event. You need to success every input for max bonus (getting 8 flames for max Rank Score).

Y, B, Rapidly X and X (press when in middle blue circle).

For Rank S you dont need much HP, as long you do “Main Combo” with Full Skill gauge (24hits), activate “Boost” and try to finish quickly. 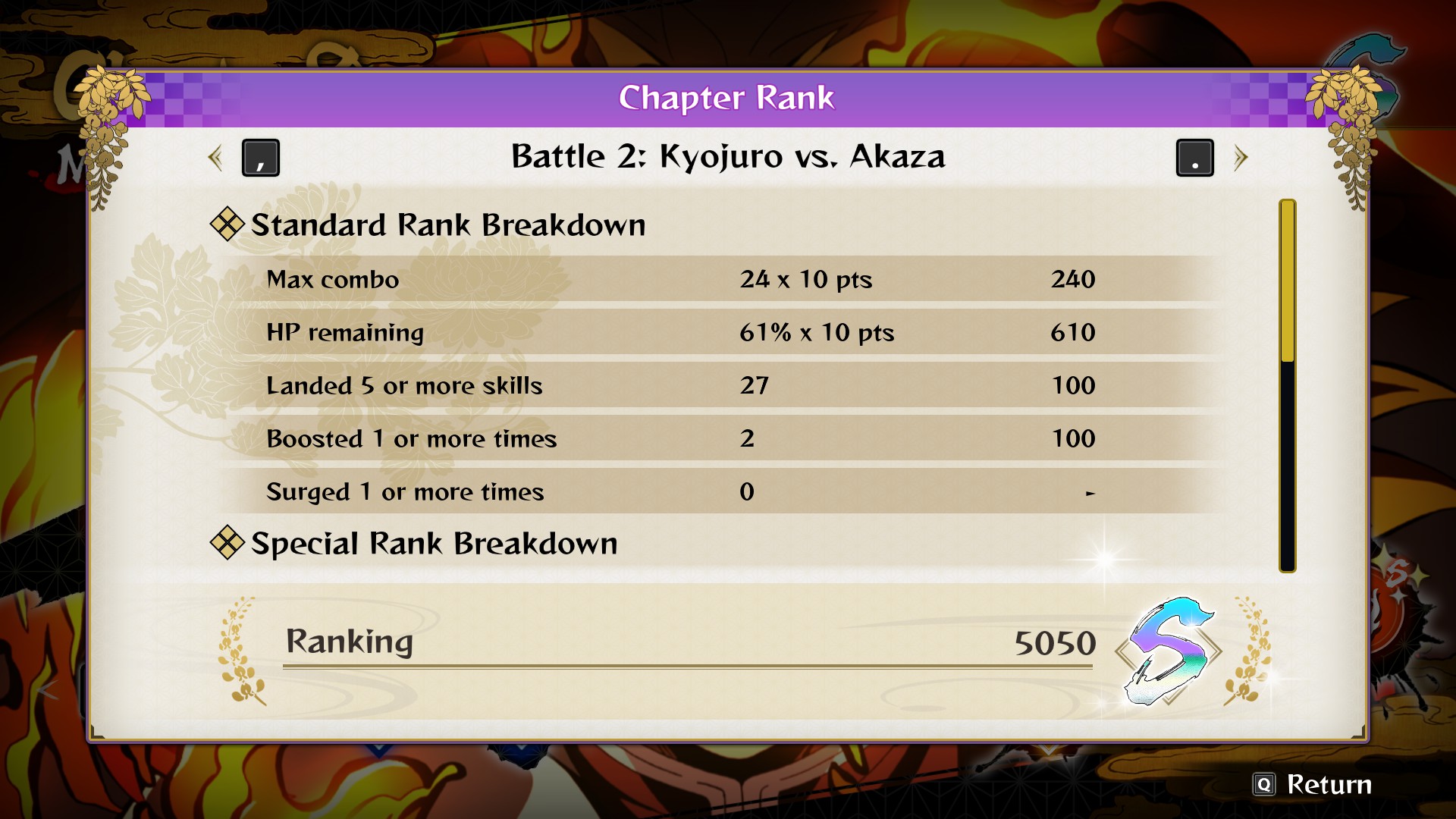 Hope you enjoy the Guide about Demon Slayer -Kimetsu no Yaiba- The Hinokami Chronicles – Rengoku vs Akaza – RanK S Video Tutorial, if you think we should add extra information or forget something, please let us know via comment below, and we will do our best to fix or update as soon as possible!