To be the Red Power Engie, you must: be reliable, be capable, and above all: have attitude. See if you have what it takes to harness the true powers given to you by DRG.

A Man or a Monster?

This loadout can wreak havoc on everything, whether your style is aggressive or defensive. Regardless, you can achieve a kill count that no one can compete with.

This gun makes you the third turret of your turret collection. 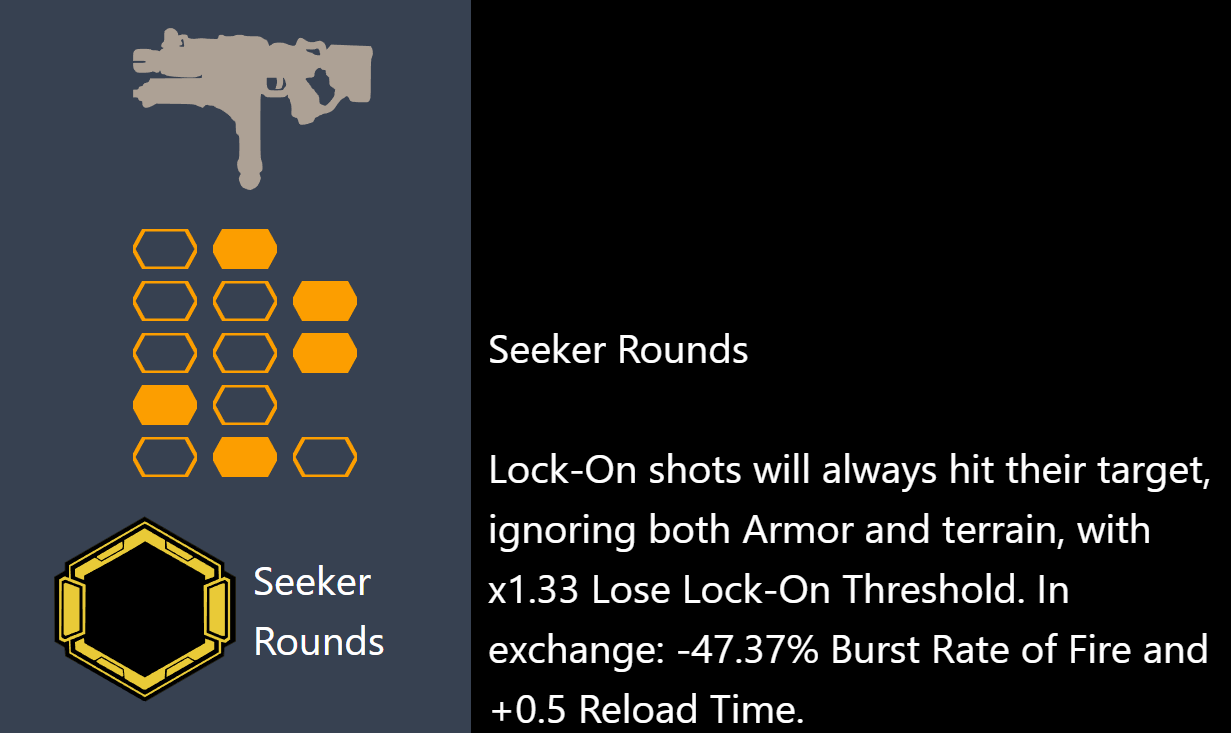 The biggest weakness of any great gun is a tiny, small, disappointing ammo pool. Which is why taking Increased Caliber Rounds for a tiny damage boost is significantly worse than two extra reloads. Think about that extra ammo during a resupply.

Finding targets is what you’re about. I like to find my enemies easily and destroy Cave Leeches before a scout can shoot any flares.


Macro Lens gives too tight of a scanner (you are Scout-dependent) and CCD Array Add-On doesn’t scan far enough to be reliable against waves.

Collective damage per bullet with Electro-Chemical Rounds: up to 30.24 damage.

Collective damage per bullet with Super Blowthrough Rounds: up to 84 damage.

Faster lock-on time means you can release your rounds faster. It also plays a very important role with Tier 5. Do not take Aperture Extension.


Collective damage per bullet with this mixed with Super Blowthrough Rounds: up to 100.8 damage.

Potential damage per 12 round burst using this math and logic: a lot.


Electric Generator Mod is super conditional as a target needs a minimum of 3 locks to get zapped, NOT you need 3 locks and all your bullets are tesla super thunder rounds. And Fear Frequency, while effective, doesn’t give you the damage boost.

Ignoring armor, terrain, some enemies (because of Tier 3) is the beauty of this OC. When the world gives you no limits, all you can give back is collateral damage… while hiding behind a wall.

This is DRG’s version of the Power Blaster. POWER ENGIE! FIRE! 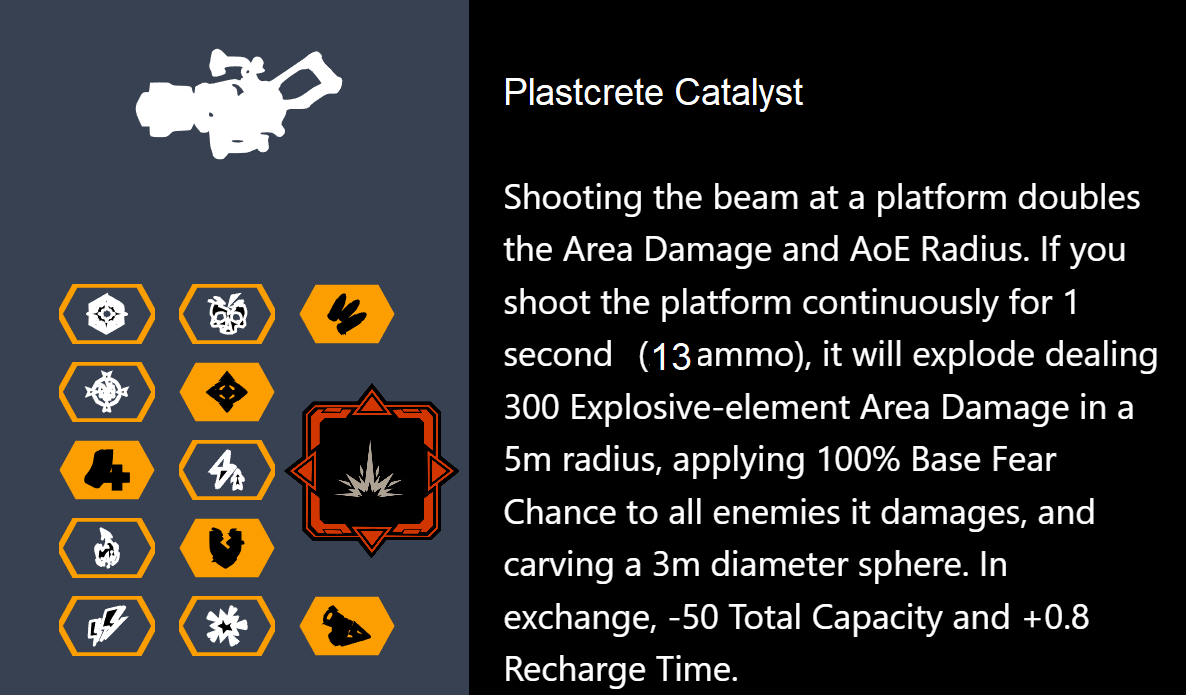 This modifier gives you the bigger blast radius to fry multiple bugs at the same time. It’s also what makes the OC so effective. Soft Tissue Disruption is only useful for a handful of bugs and is not really needed.

We are going for the most ammo per resupply, here. I know Open Structure Battery allows you to shoot faster, but it’s not that needed. Just be ready to commit when you shoot the beam.


More damage how? If a beam tears off a piece of armor, that’s 35 damage done to the bug for this gun. Melt off many pieces of armor, it’ll be 35 * X. Theoretically deals more damage.

Hydrogen Rupturing is like a special event that doesn’t happen often enough, and when it does, you might forget about using the beam entirely. Bio-Mass Converteris great, but slowing enemies is better for any reason. For me, it’s because of the OC.

Any enemy that walk into the 4.2 radius will slow down, bunch up, and be forced to take the explosive damage that happens 1 second later. This is effective against any enemy, even after resistances are applied.

Your turrets really dish out the DPS. Say “goodbye” to your turret ammo pool. 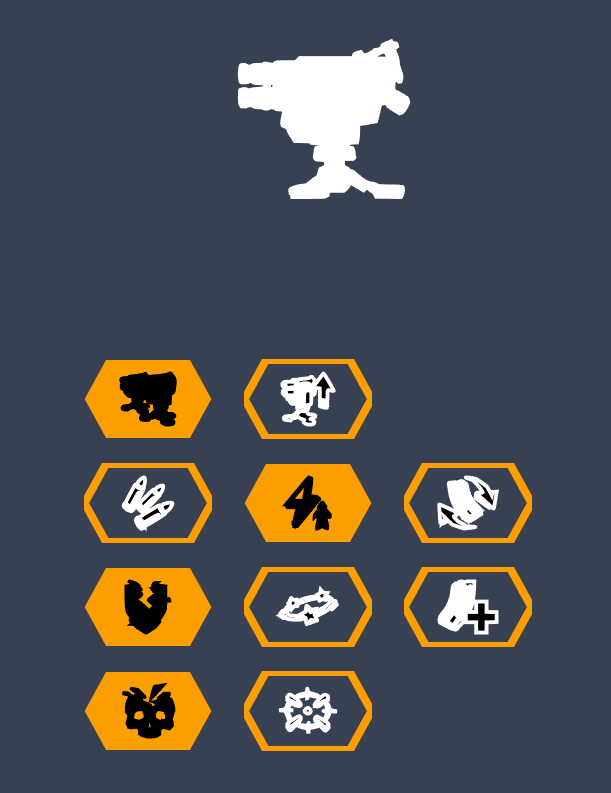 DPS and targeting multiple enemies. It makes ammo disappear fast, but your allies will thank you.

There is no sane engineer who will spend 4 seconds to deploy a turret, let alone two.

“But there’s an option for more ammo!”

Those bugs will eat you alive before you can use any of that ammo pool if it takes FOUR SECONDS to deploy a turret.

The AI is not super reliable for this one, but whenever a piece of armor breaks off, your turrets will deal 44 damage. That’s how we (sort of) save on ammo.

I know the Hawkeye System gives you 360 degrees of safety, but having a specific scope of attack allows the turrets to be more effective and deal way more damage. Win-win.

Face it: this mine is better than the rest.


It explodes FOUR times, implements fear in bugs, and is RECOVERABLE if it hasn’t exploded once.


If I’m full on grenades and a resupply is called (and needed), I’ll throw two mines wherever. If they go off, that’s OK. If not, the mines are there to be picked up whenever I need them.

The only things worth mentioning is to go for the extra ammo plus the bug repellent so you can make a platform “barrier” whenever you need to redirect bugs.

This build has served me well. The best part of this build is that it can mold to your aggressive or defensive playing style. I hope you enjoy this one!

This is all about Deep Rock Galactic – Red Power Engine Weapon Guide; I hope you enjoy reading the Guide! If you feel like we should add more information or we forget/mistake, please let us know via commenting below, and thanks! See you soon!