“Welcome to bunker city, population – ME!”


In this short guide i will show you how to how to properly make bunkers so the entire team will be safe during a swarm, as well as a few pointers to note and things to avoid when drilling the bunker’s infrastructures.

Bunker for a typical swarm alert

1) Make sure the terrain is straight and easy to cross outside the bunker’s opening. 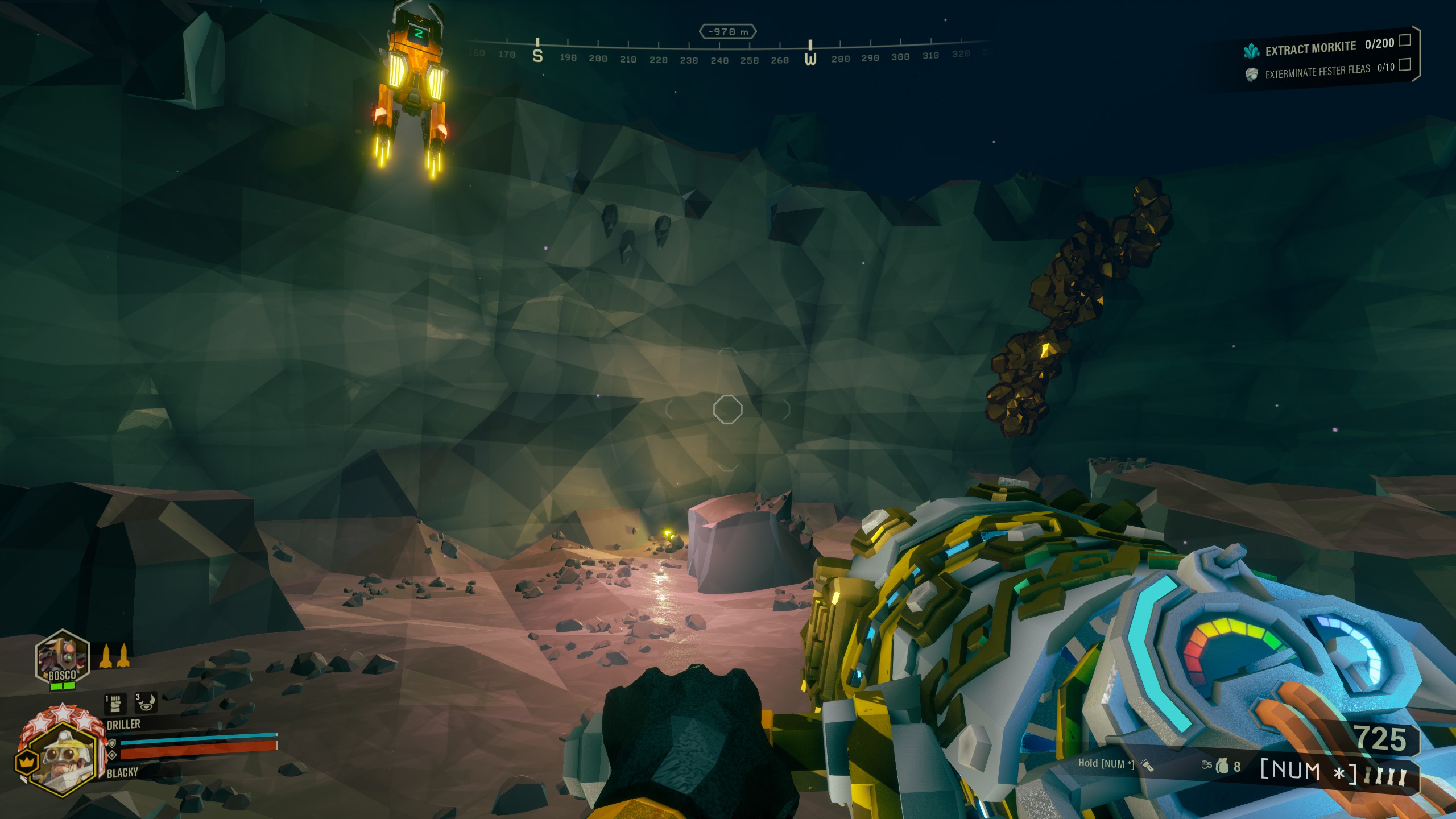 2) Use your terrain scanner to make sure there is enough rock (and stone) inside the wall you’re drilling into, so you wont end up in another room and ruin the bunker’s effectiveness.


3) Start drilling. The amount of depth i’m generally comfortable with is ~150% drill heat rate, which means that you drill forward 100% until the drill needs to be in cooldown (technically 99% so it wont overheat), wait for it to go down and then drill again until it reaches 50% heat. After that you repeat the process and drill parallel to the tunnel you have just made so it will be twice as wide. This will make sure all 4 dwarfs have enough space to stay inside and to prevent teashooting when the bugs come. 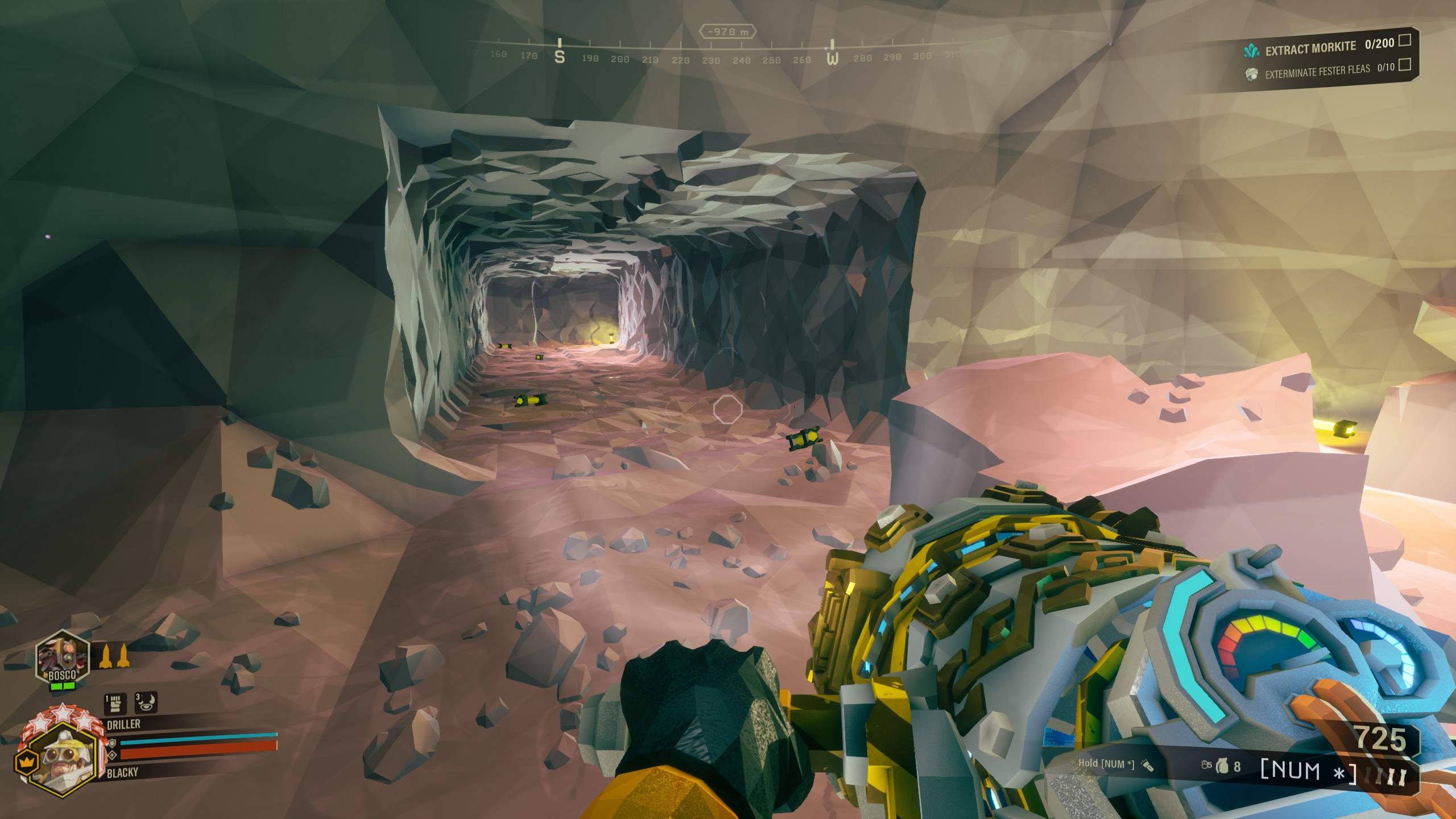 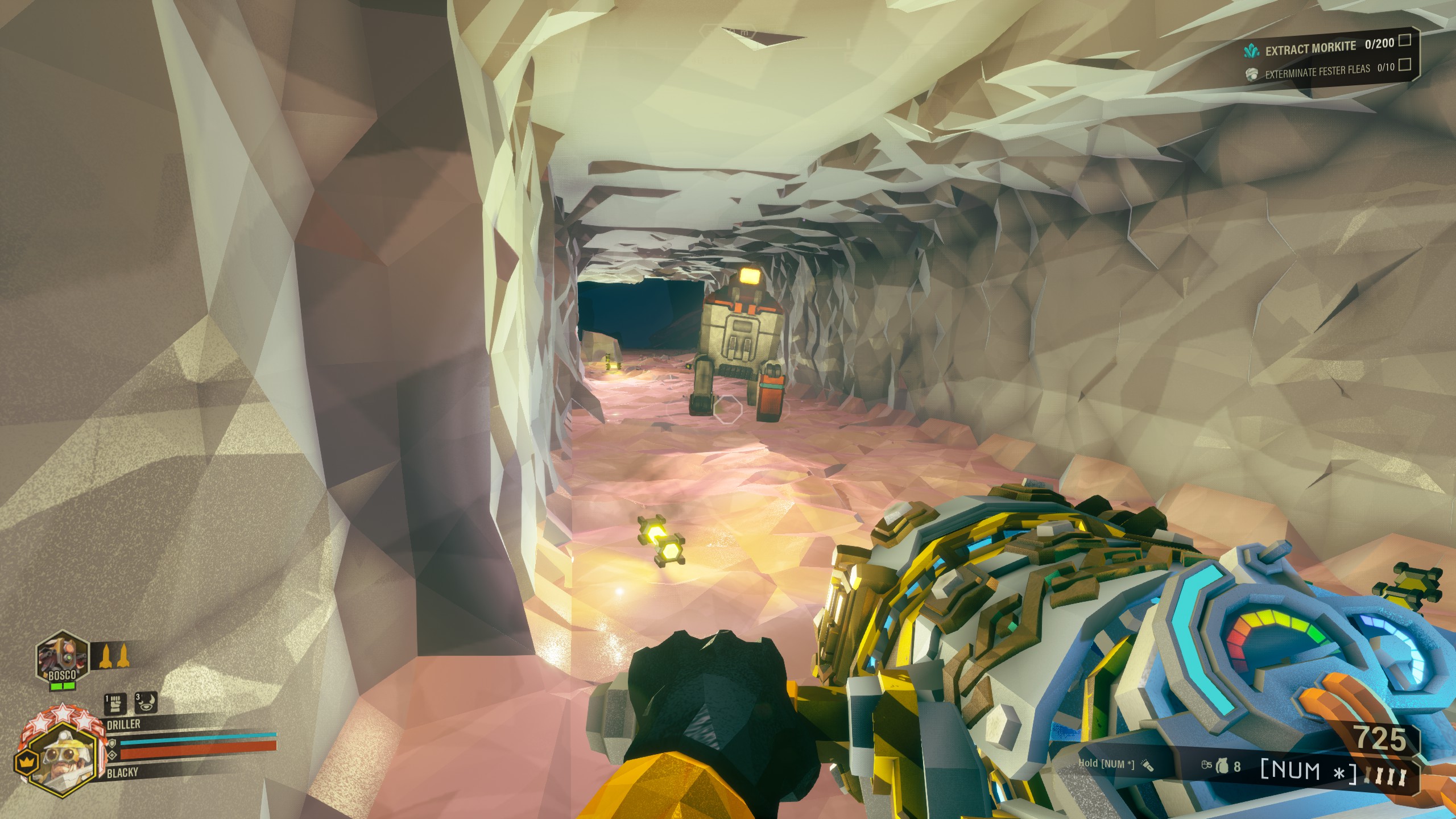 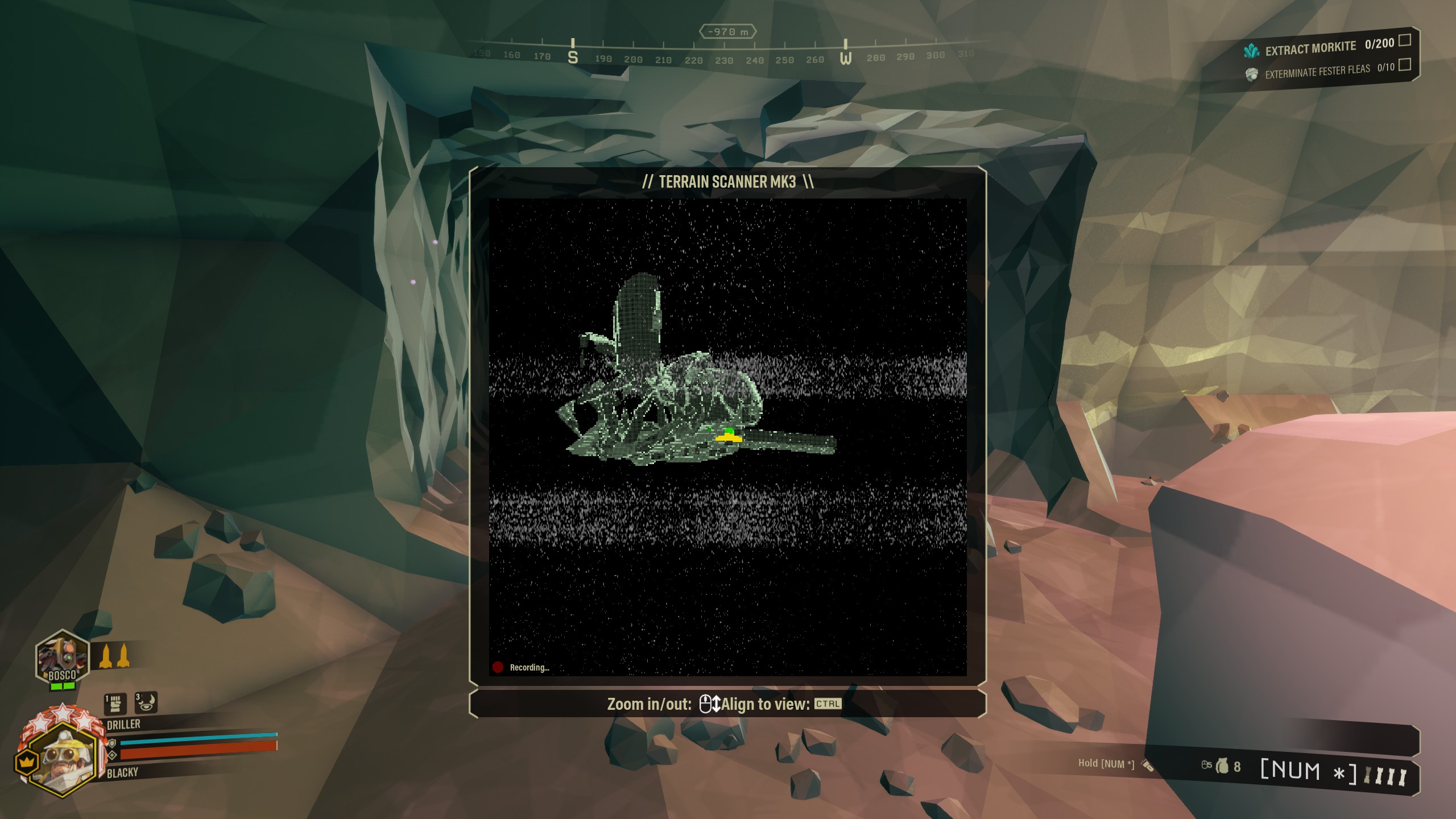 4) Now you have set the bunker’s foundations, you have a choice to make: “Do i use C4 to detonate the far end so it’ll make a cozy room for us to stand?” I tend to answer this depending on how many C4’s i have available, my current C4 upgrade path (having only 2 means its inefficient to spend one for extra drilling holes), and the overall danger in the current game (hazard / mutators / terrain shape / etc.). 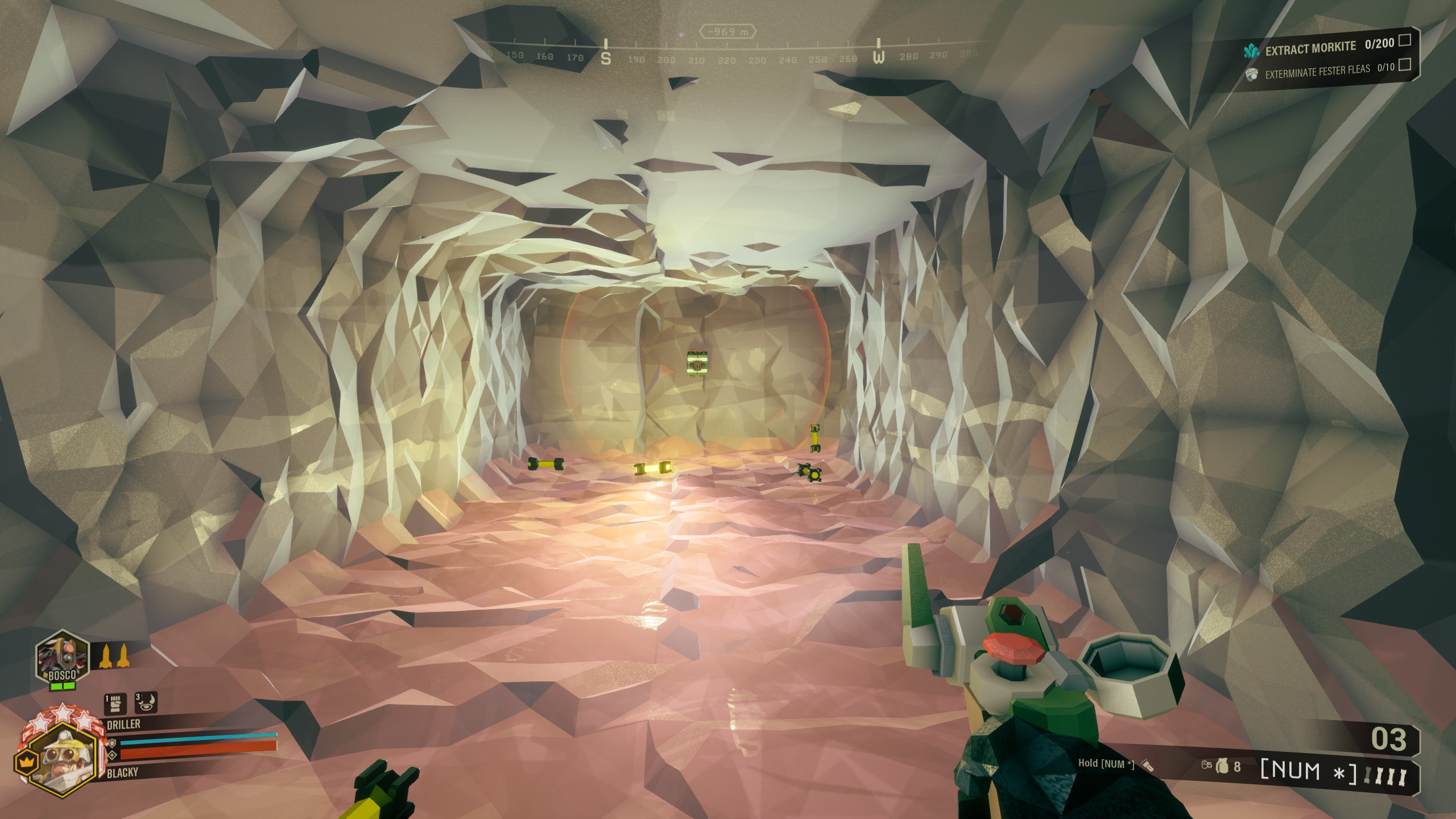 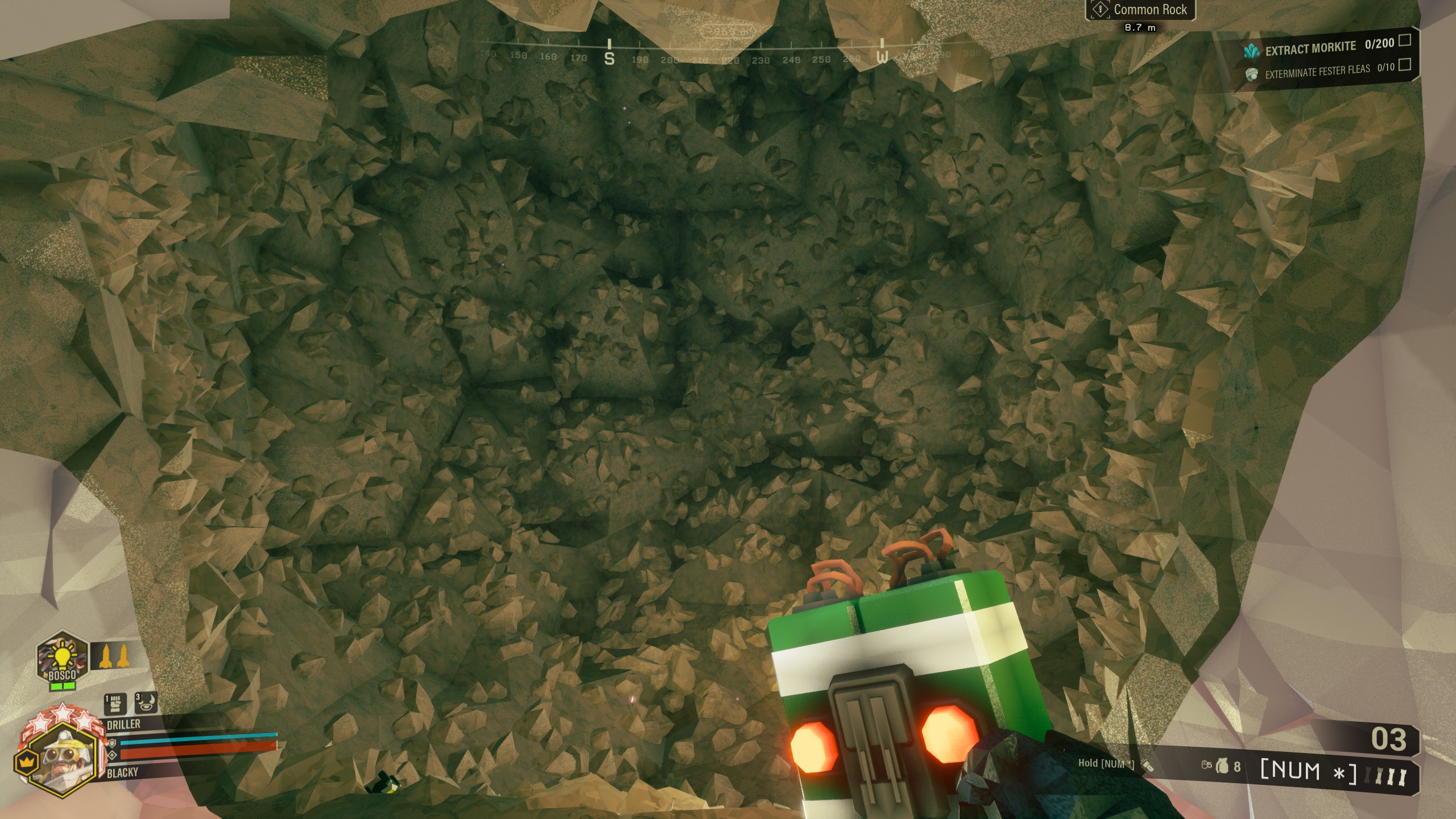 After using a C4, tell your friendly engineer to place platforms on the bottom of the C4’s crater so you will have a proper place to stand on. If you dont have an engineer, simply carve the ground yourself. 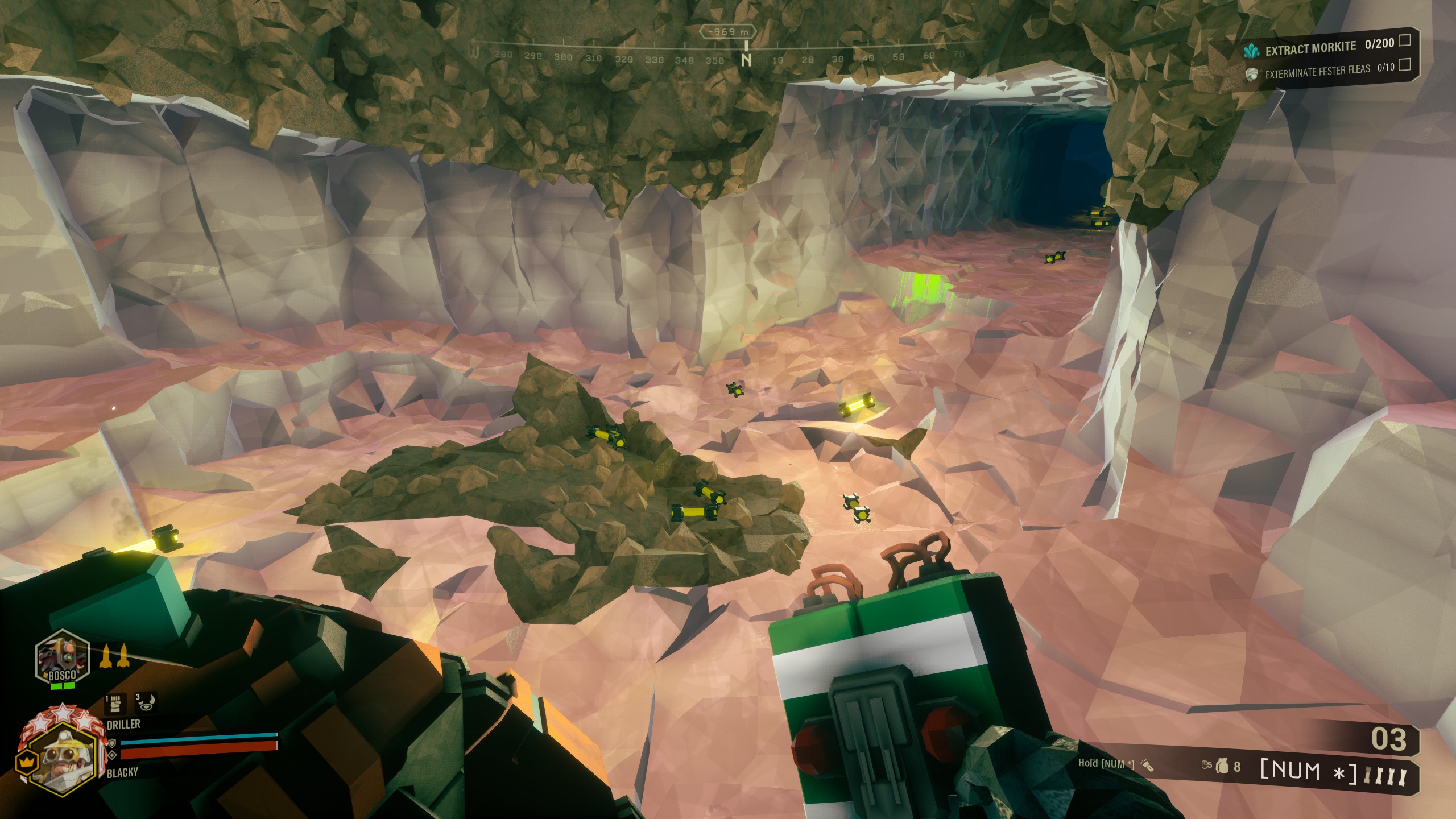 5) Your next step is to think about supply pod’s positioning. Of course, you may no need to deploy one at this stage of the game, but if you feel that a bunker is a good idea right now, it may be worth to put a supply pod right at the end of the bunker (especially good for when playing with the low oxygen modifier). 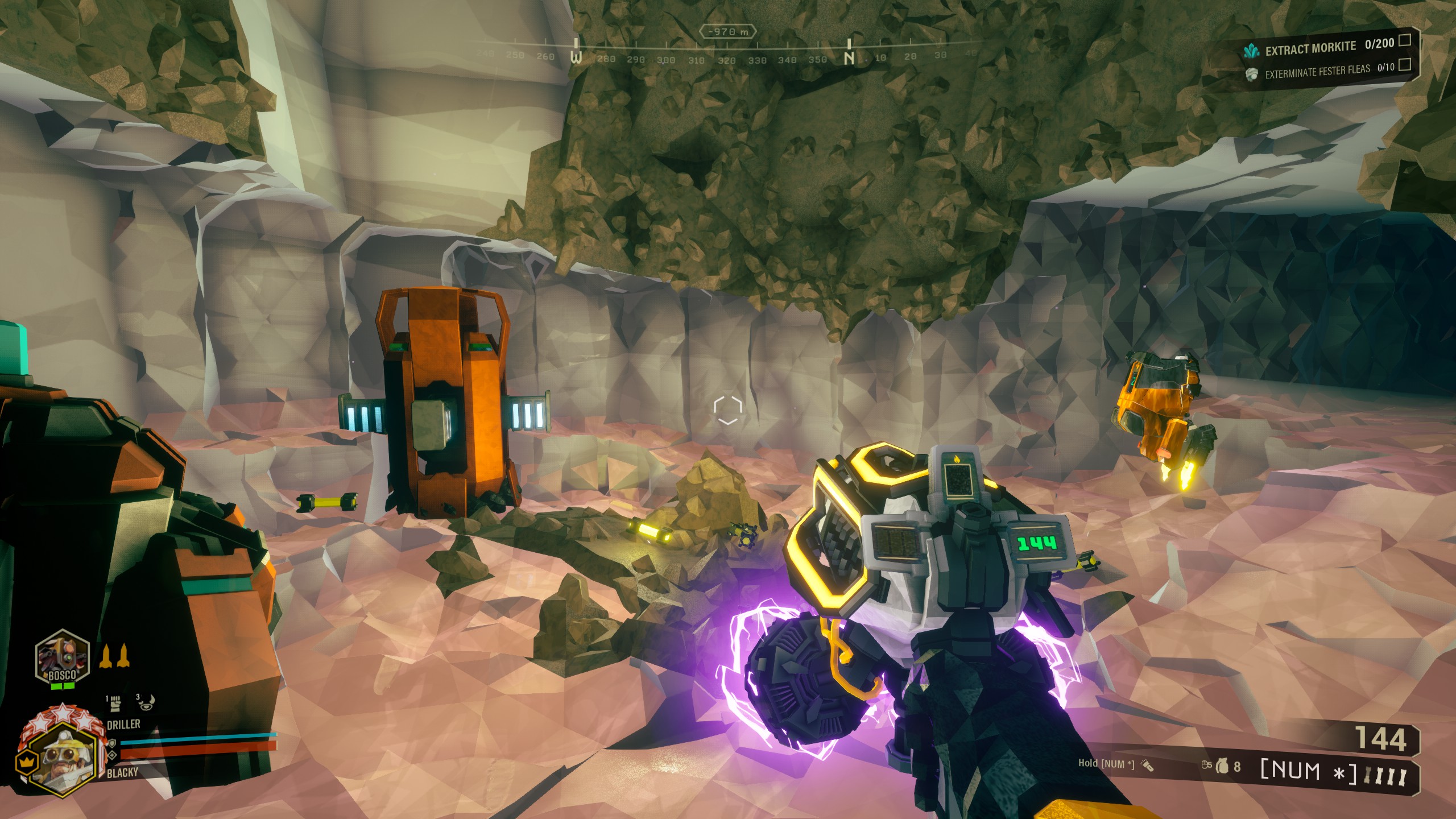 This is the tricky part tho, as now you have created another potential spawn location for the bugs to sppear from, so you will need to tell your engineer to place 2 platforms at the top of the shaft that has been created to seal it off. 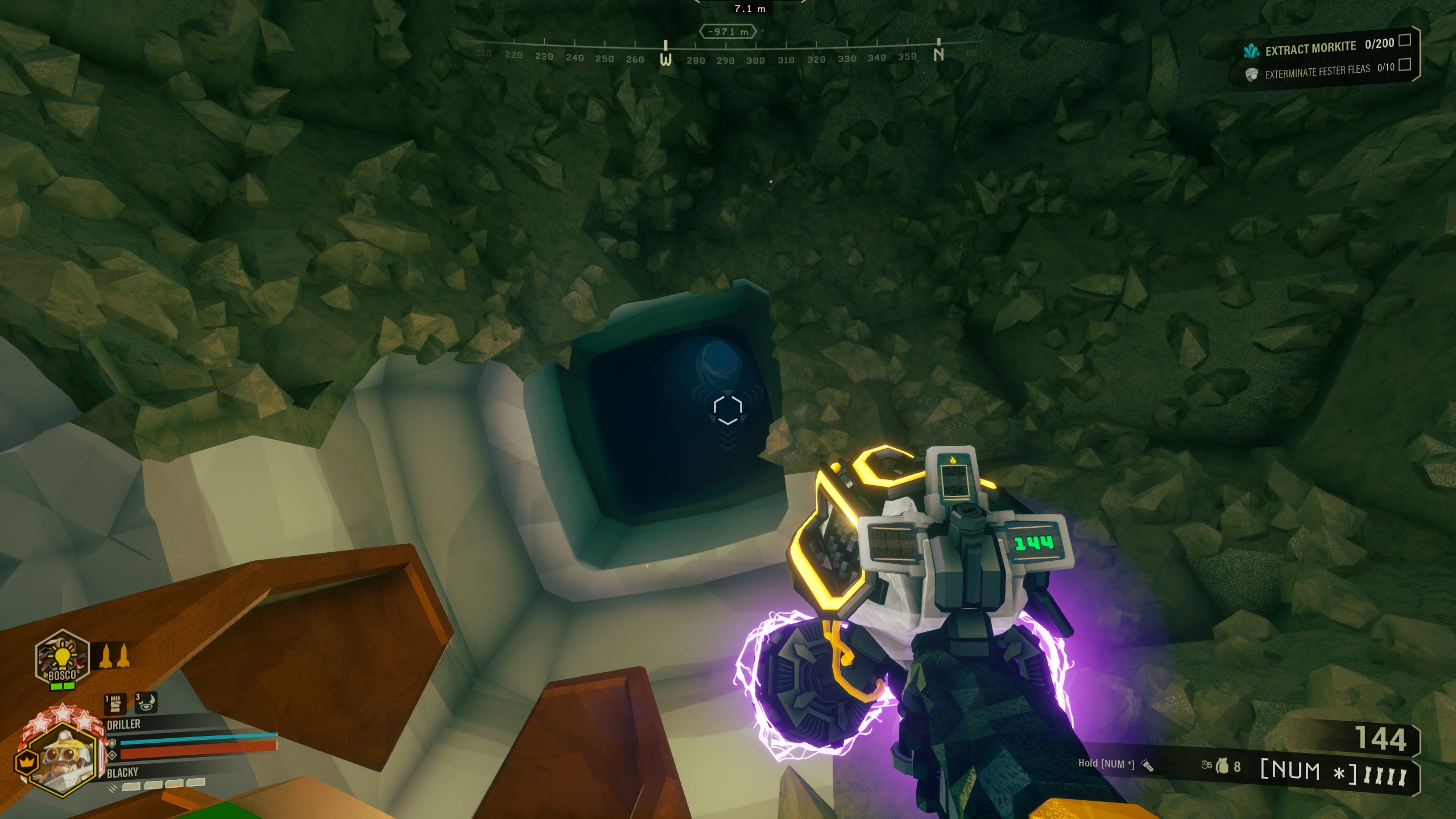 That’s basically it for how to make a proper bunker against random swarms of bugs. Your next step would be to enforce it with sentry gun positioning (either inside or outside – this is depending on if the engineer has specced into the ‘Turret Whip’ shotgun mod that allows him to shoot the sentries with his shotgun for extra damage, so he would want to have it inside the bunker for ease of use. If he doesnt use this weapon/mod, then its best to put the sentry guns outside as they block the view of the players when they shoot from inside the bunker.

Bunker for a salvage operation

1) When it comes to salvage operation, you will need to do a few things differently, as your main event (uplink box / fuel cell pod) is locked to a specific location and can only be drilled downwards, so with that in mind, you generally just drill it down, but before that, you make sure the terrain is ok to be drilled down without drilling into another cave underneath you. If this scenario actually happens, its best to drill even further down until you have complete control over your sorroundings and nothing can interfere your drilling and tunnling systems. 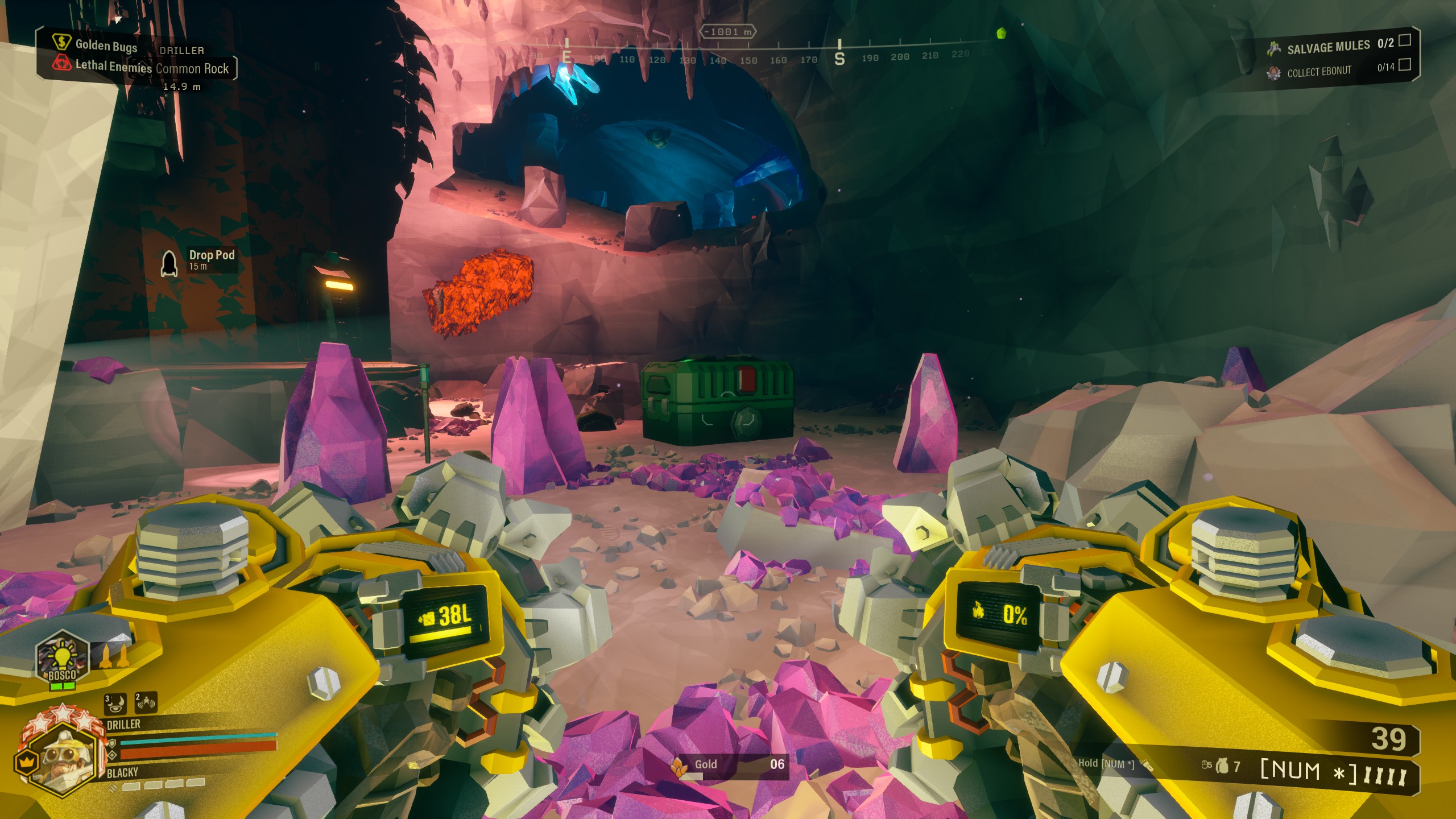 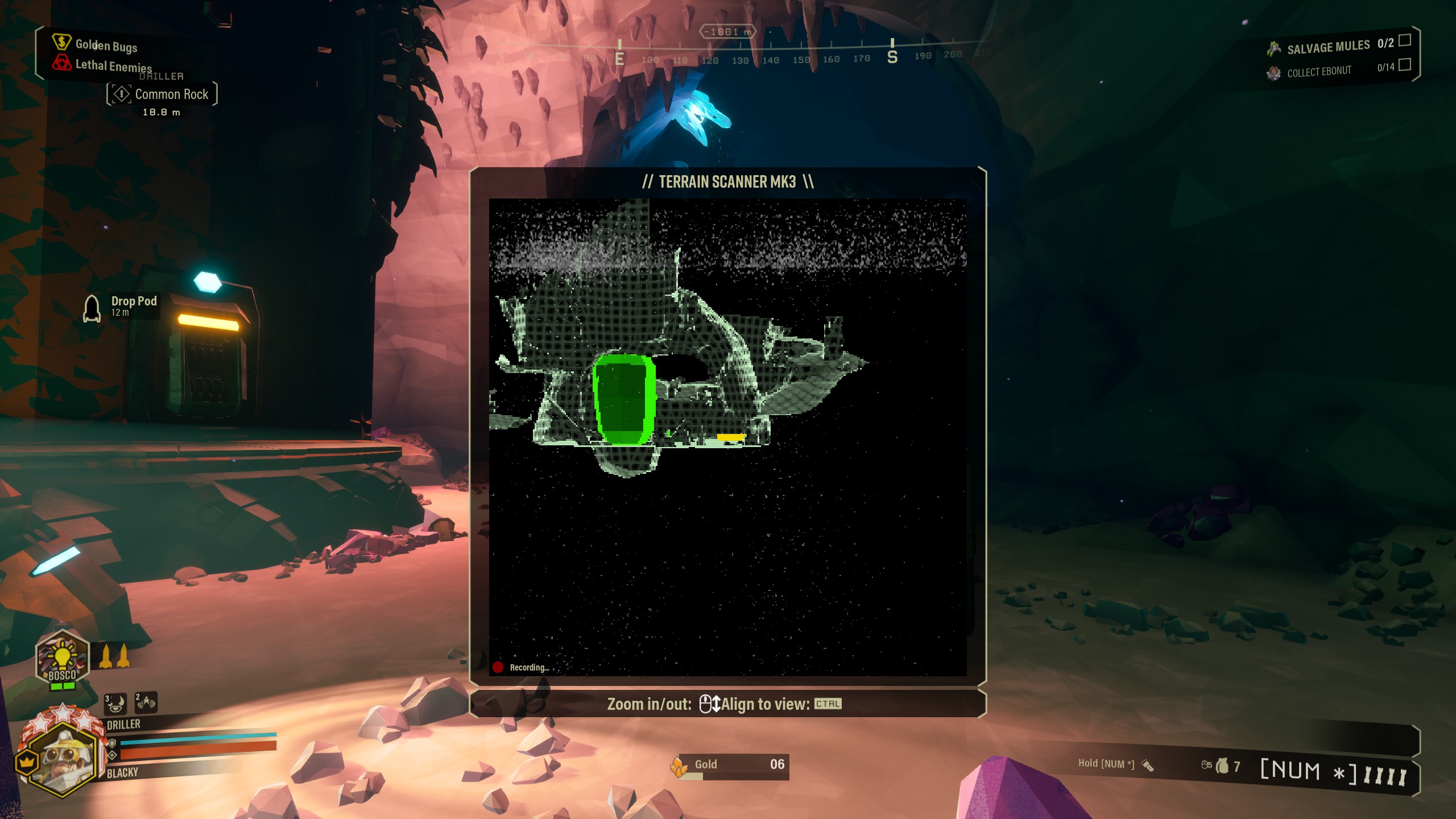 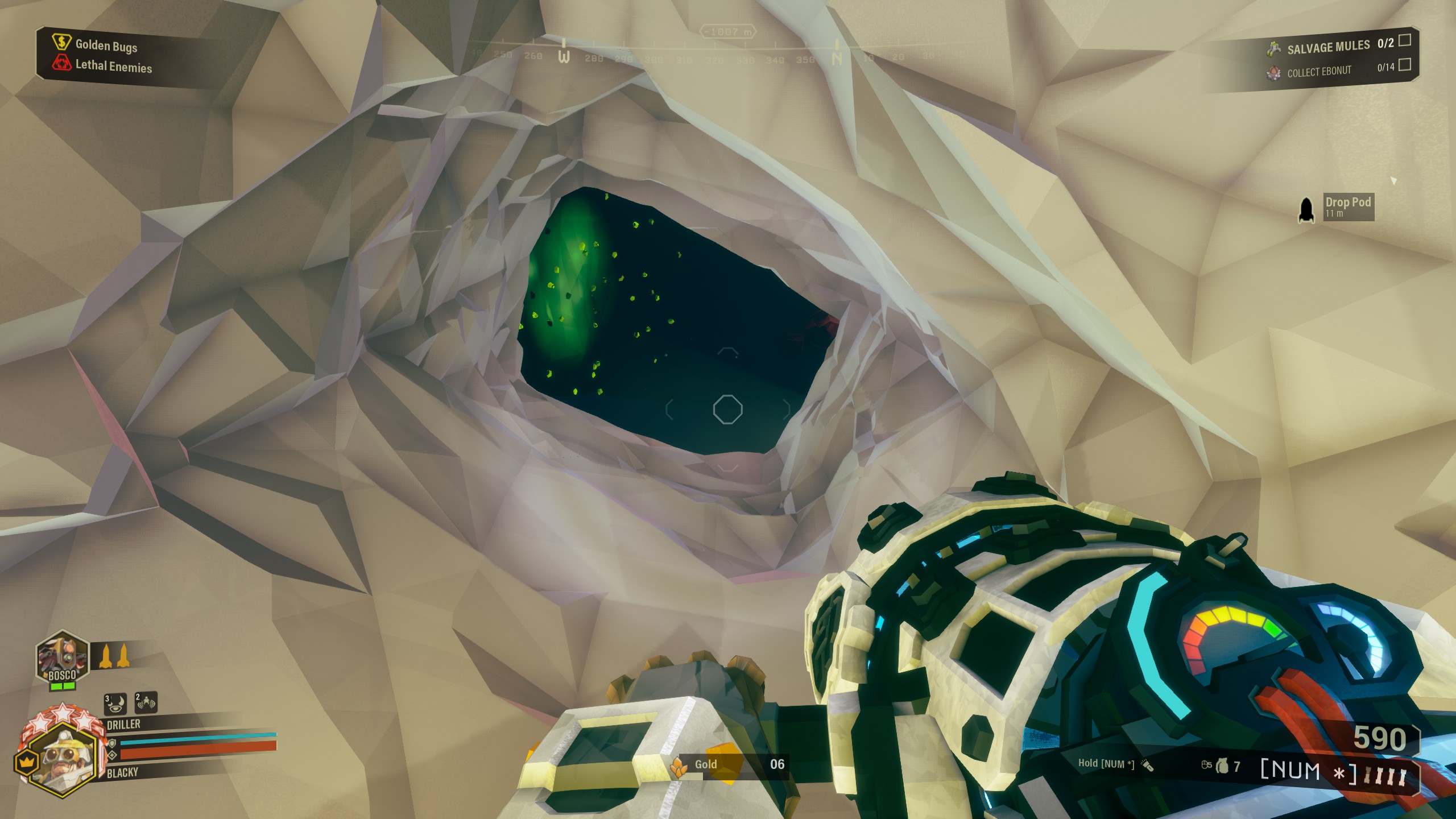 2) The next thing you’d want to do is to find the closest exit to a horizontal tunnel, as once again, the engineer should block off the upper tunnel (after making sure everyone gets in the bunker) just above the uplink as everyone should focus on horizontal gameplay as this is way easier and less disorienting than looking up the entire uplink session. 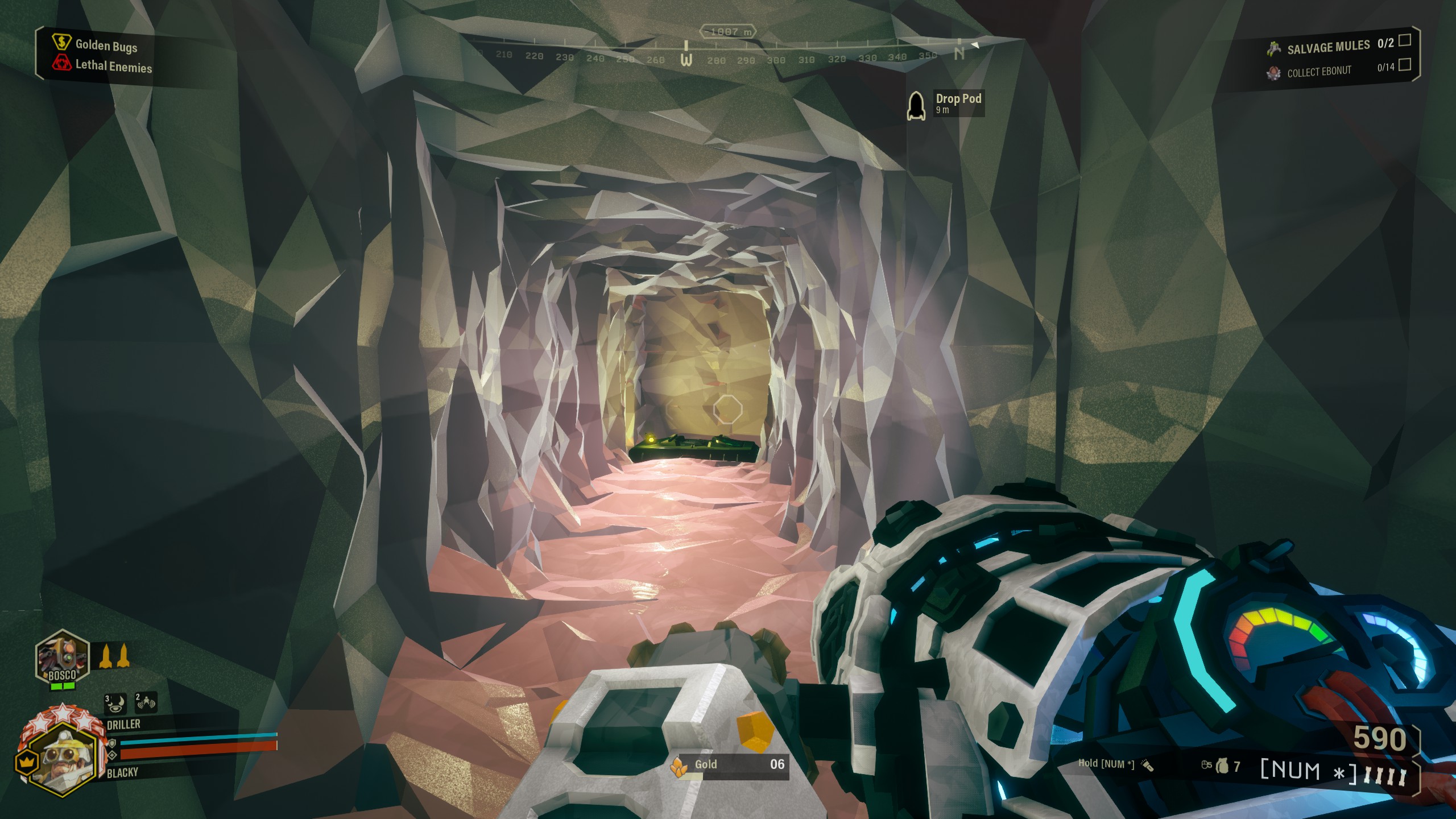 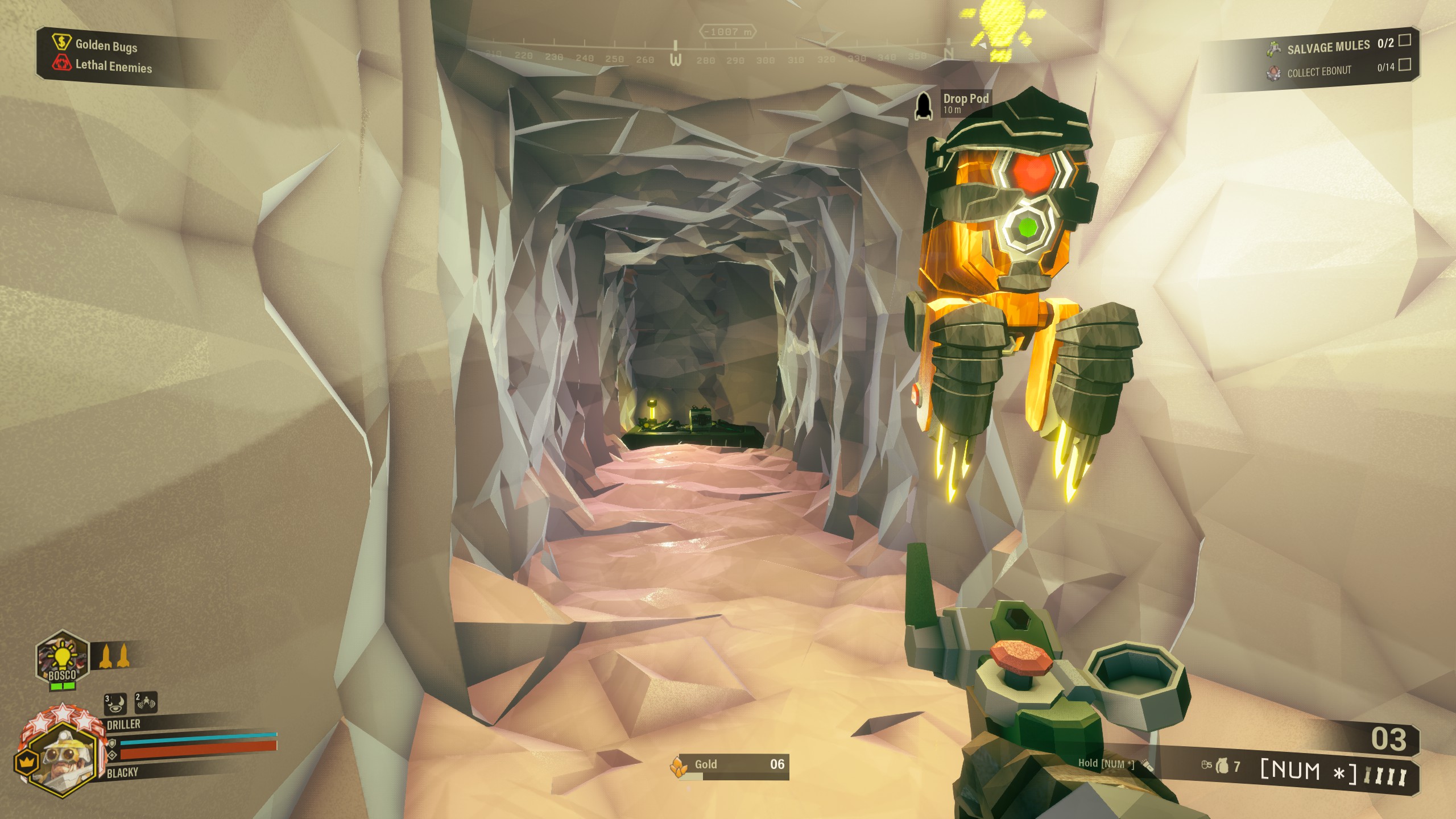 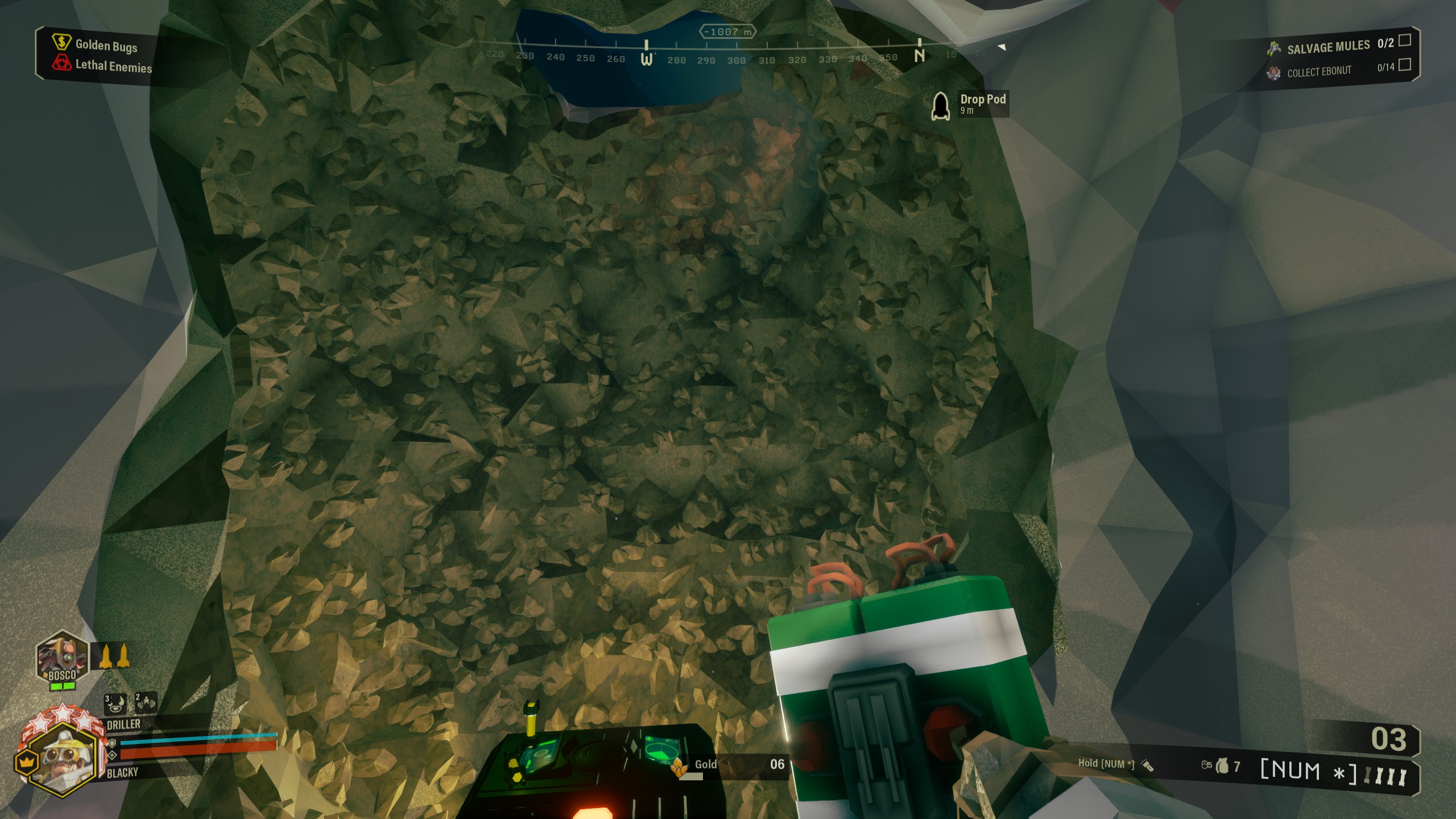 *If there is no engineer in the team, then you will need to fight from the bottom and aiming upwards. This can be slightly tricky especially if the opening hole is very wide by not drilling deep enough, tho it can always be self corrected by keep drilling the uplink even deeper.


3) Final preparations – Widening the horizontal tunnel like in the example from the first section in this guide. 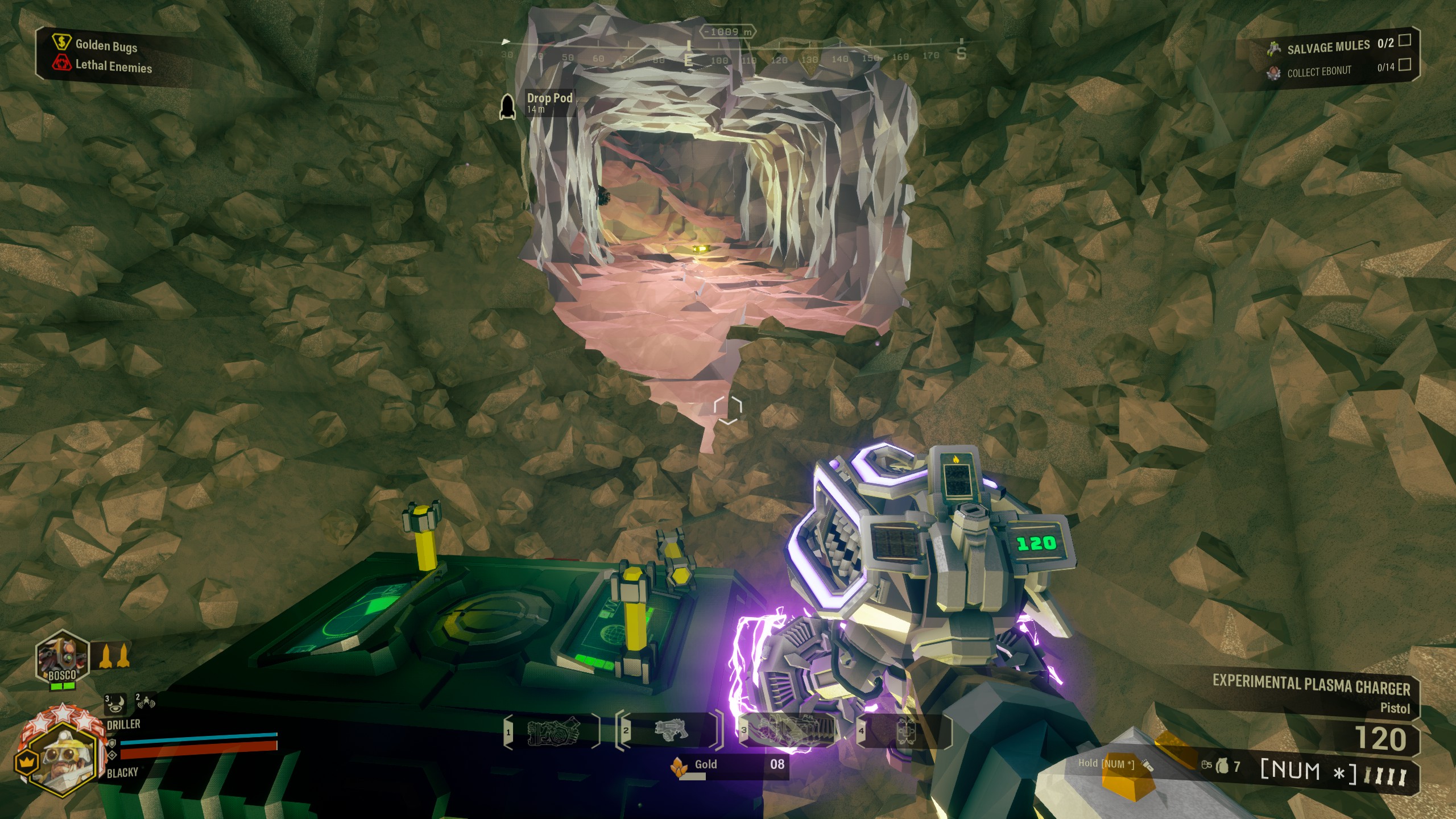 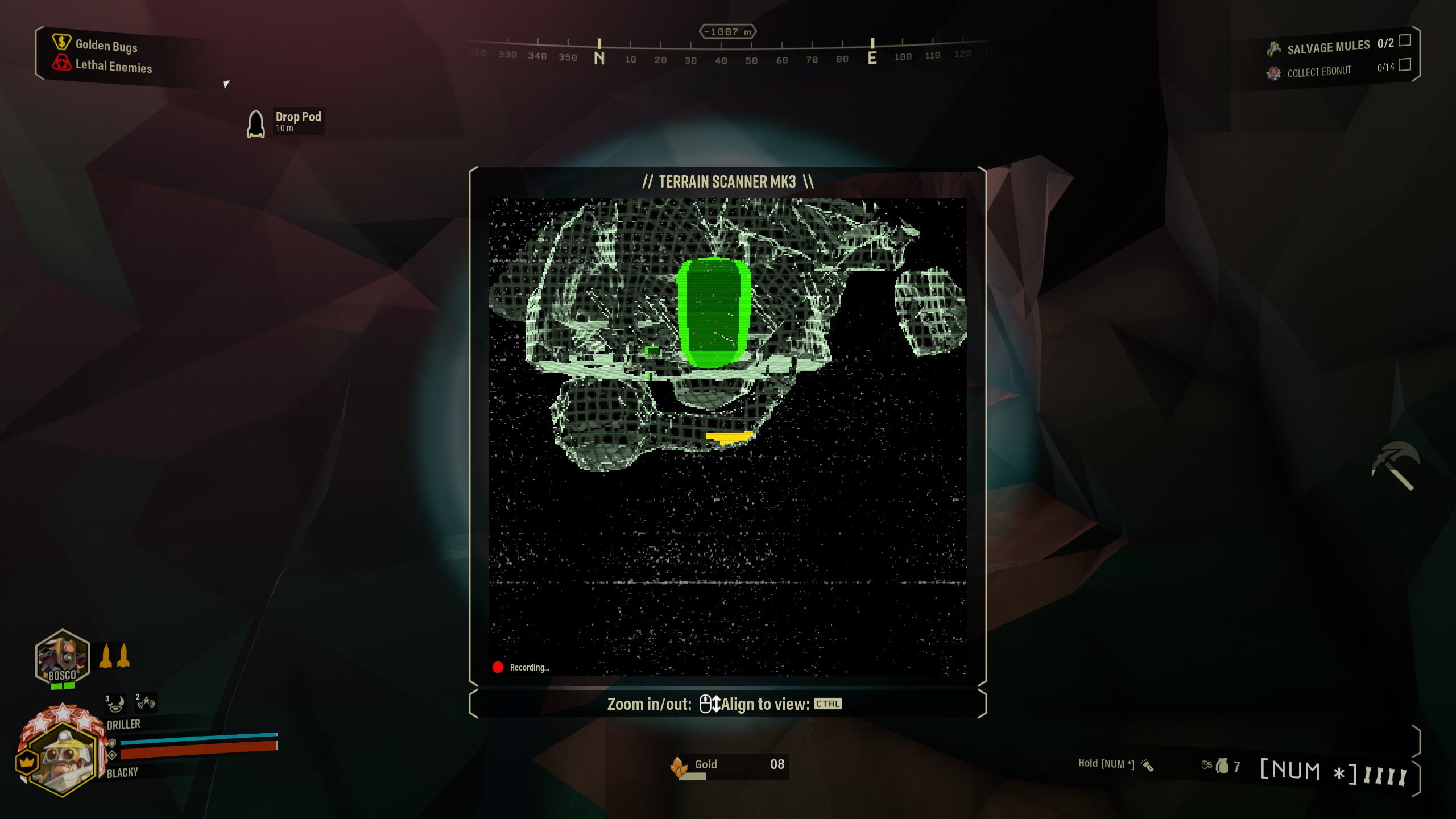 Now everyone can focus on this horizontal tunnel for the entire uplink process.


4) Repeat all this process for the fuel cell pod later on, just bare in mind that its possible to first connect the fuel pod to the drop pod (with the cable) and *then* start drilling it down. This will save a lot of hassle with cable management if not remembering this trick (cosmetically speaking, the cable will be stretched out between the fuel cell and the last cable node).

After the fuel cell charging session has ended, it is generally recommended to stay in the bunker until the timer ends and the drop pod is ready to deploy back and end the mission (this is again depending on how dangerous the current game is).

* For any reason what so ever, do not seal the bunker entirely. Always keep exactly one open tunnel that leads to the main cave.


* Its generally best to coordinate with the engineer for the entire planning of the bunker ahead of time, as you would want him to pay attention for when to seal the desired openings when a supply pod is in order, or when making a new exit tunnel.


* If a bulk detonator appears, make sure you have quick thinking with creating a new tunnel that avoids him. Its more recommended to make a new escape tunnel than using the main bunker tunnel as it may be flowing with enemies.


* If your gunner has an autocannon equipped, prioritize him to get behind the other dwarfs, as his cannon doesnt inflict any friendly fire so he can shoot from behind you and nobody will get hurt.

Also, if you coordinate with your team ahead of time in the space rig that you’re gonna be making bunkers, advise the engineer to use the breach cutter as its very strong for this particular gameplay, as well as any other penetration upgrades for other classes (scout’s boomstick for example).


* If the game has the mactera plague mutator, you will need to be more alert for flying macteras inside your bunker as well as grabbers.

Hope you enjoy the Guide about Deep Rock Galactic – Best Strategy for Building Bunker in Game, if you think we should add extra information or forget something, please let us know via comment below, and we will do our best to fix or update as soon as possible!