But if you want to use a perk that will help you FIND totems until they are easy to find, I suggest counterforce. This small game is excellent but a waste of slots. However, if you are new to totem searching or want some practice, you can also take along a small game. 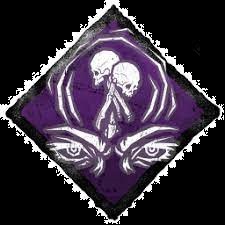 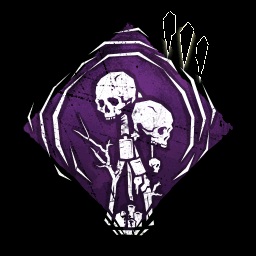 Split maps aside, totems will always be in the shape a Pentagram. This was suggested with the killer emblem that has rarely or never been discussed.

Except for a few totems, all totems will remain random each match, but still in the form of a Pentagram

Let me show it to you 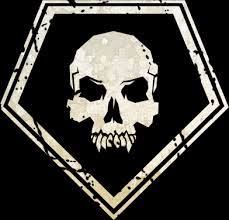 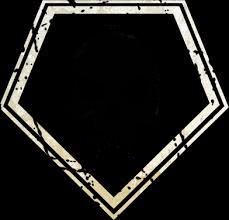 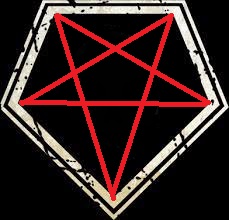 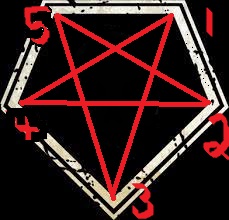 Now that you have seen what I just said, it will be easier to find totems since you can turn approximately 72 degrees (360 degrees / 5 totems = 72 degrees per totem)

Larger Maps You will need to travel further, but it is the same concept. Find your first totem, turn 72 degrees(, and then find the next one. Depending on the size of the map you have, the next one will be approximately 150-200 feet from the one you were looking.

The totems will always be found if the map doesn’t split in half.

form of the pentagram

You can LOCATE your first Totem just like with all maps. If you’re unfamiliar with spotting them, you can ask a friend to help you find them. 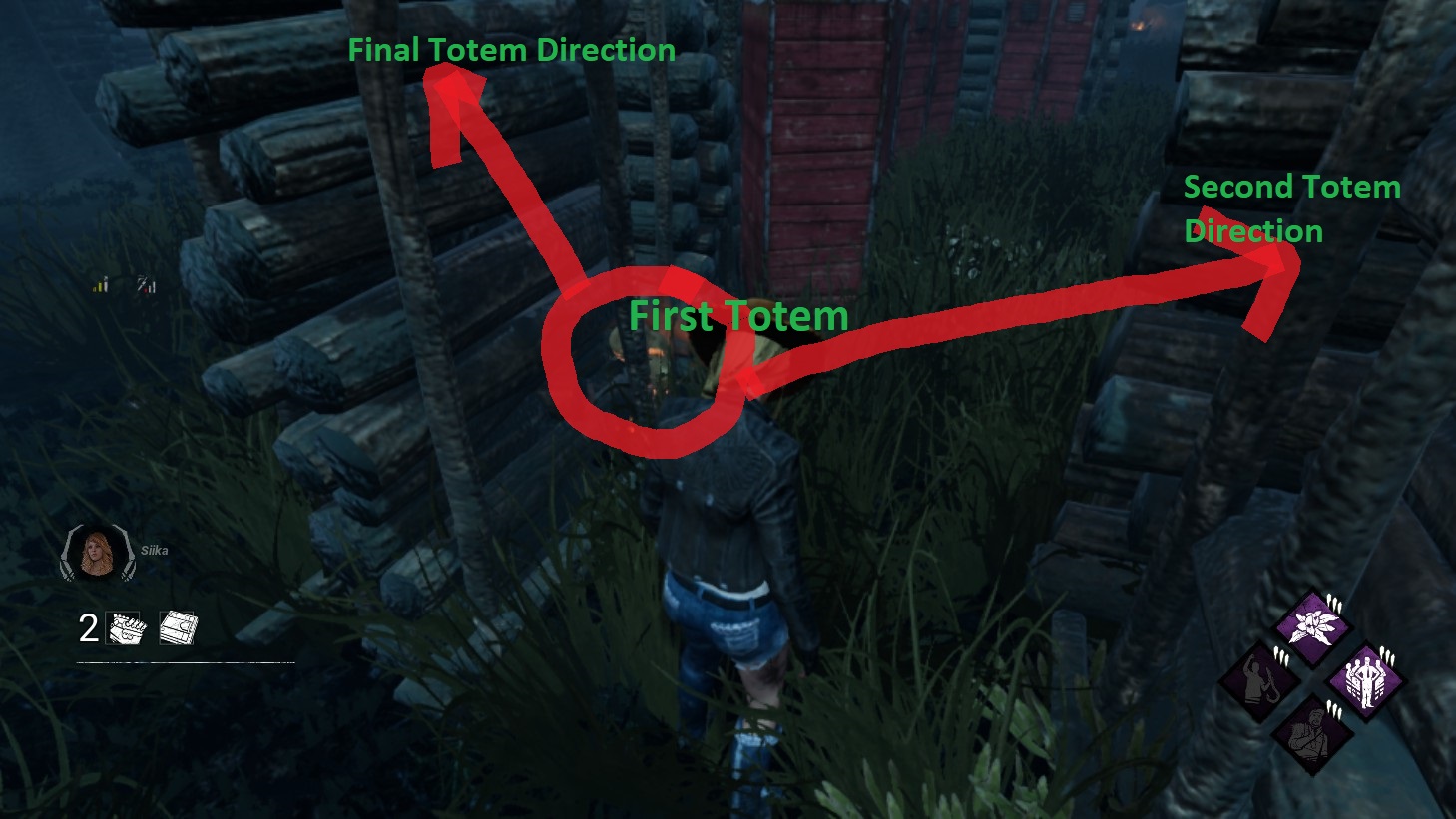 From the first totem, turn approximately 72 degrees in either direction. Then, since this is a larger map, travel approximately 150-200 feet to the next totem location 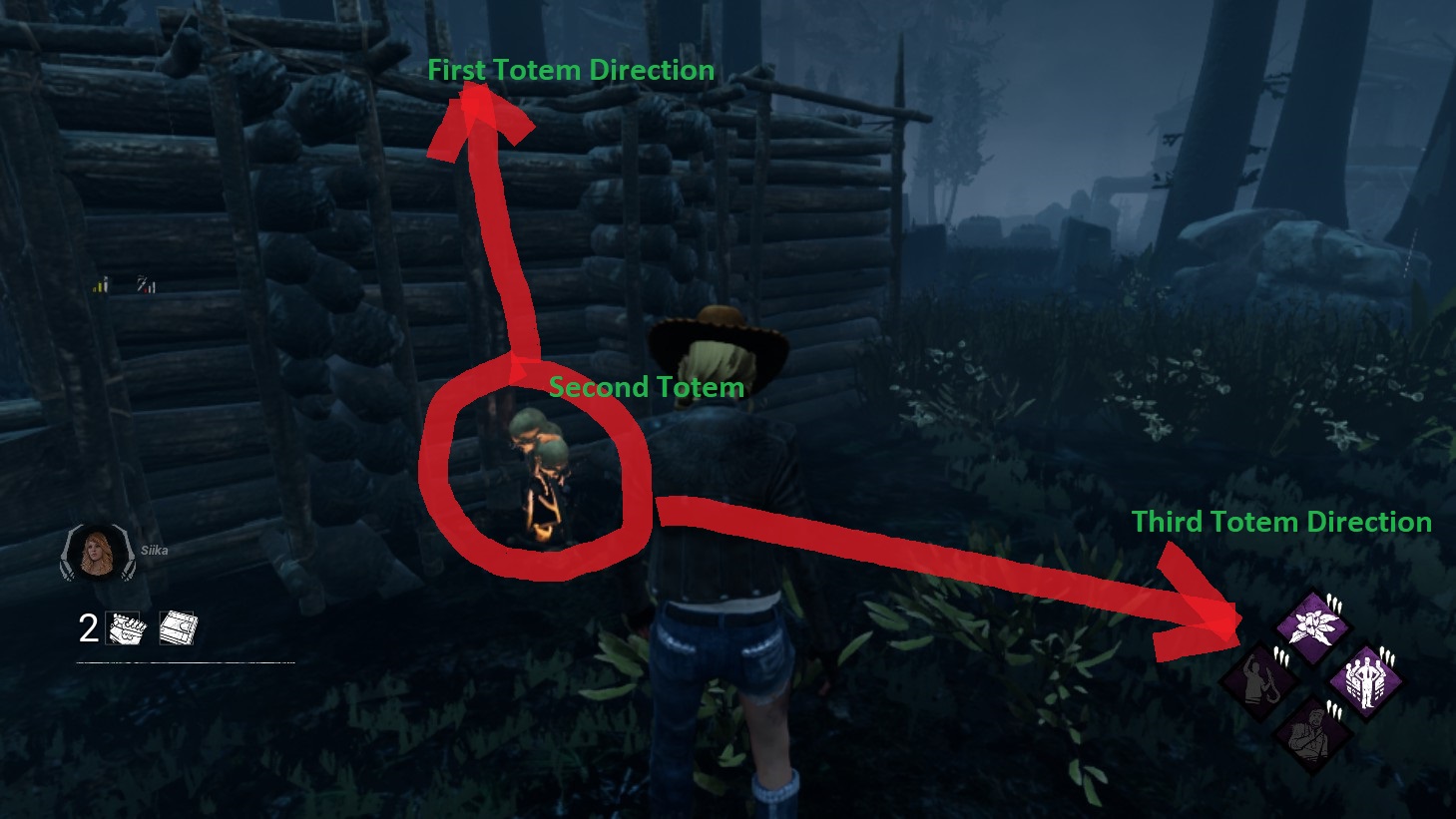 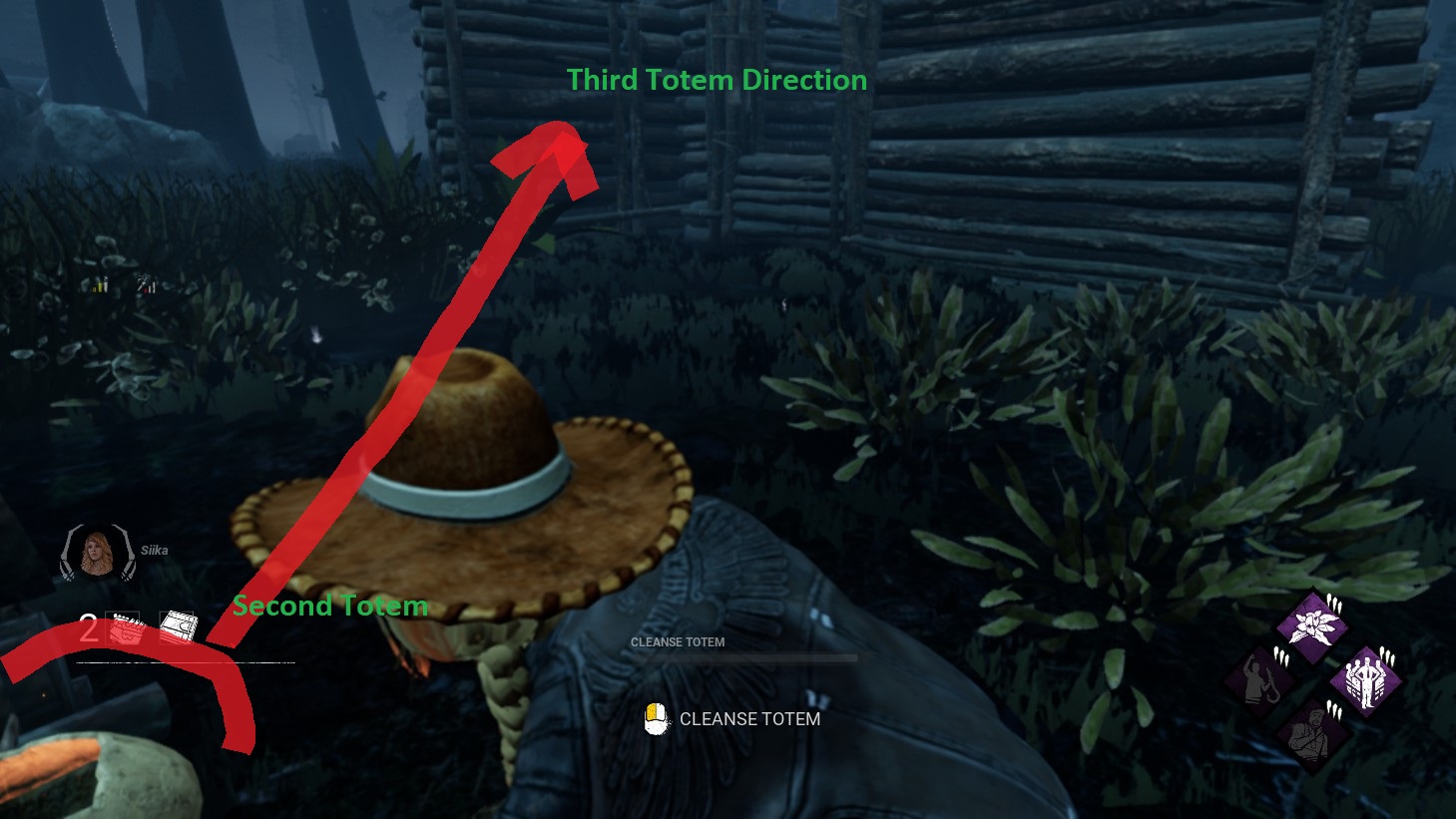 You can now rinse and repeat. Turn 72 degrees in the opposite direction and continue to the third totem. This will take you approximately 150-200 feet, depending on how large the map is. 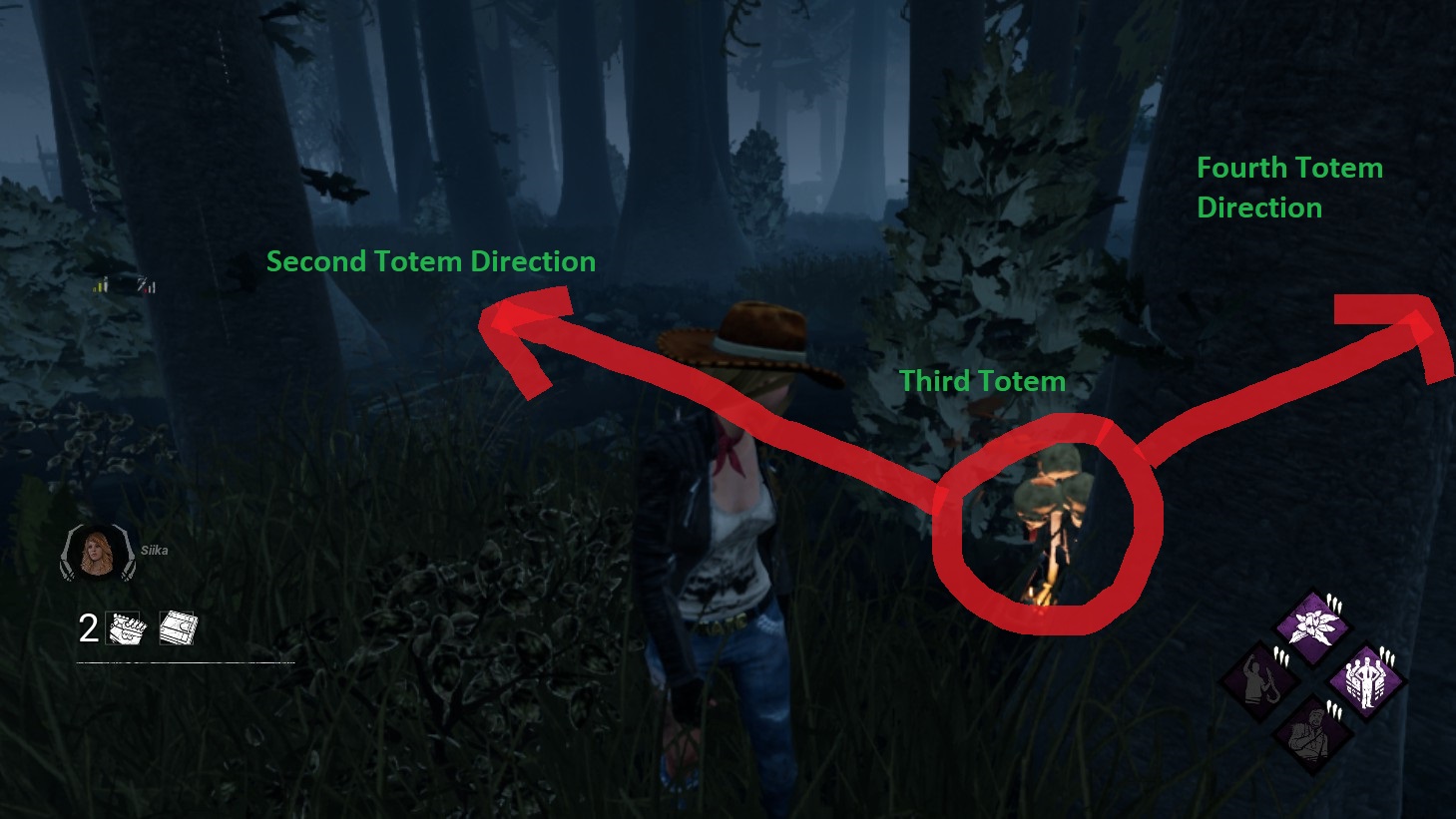 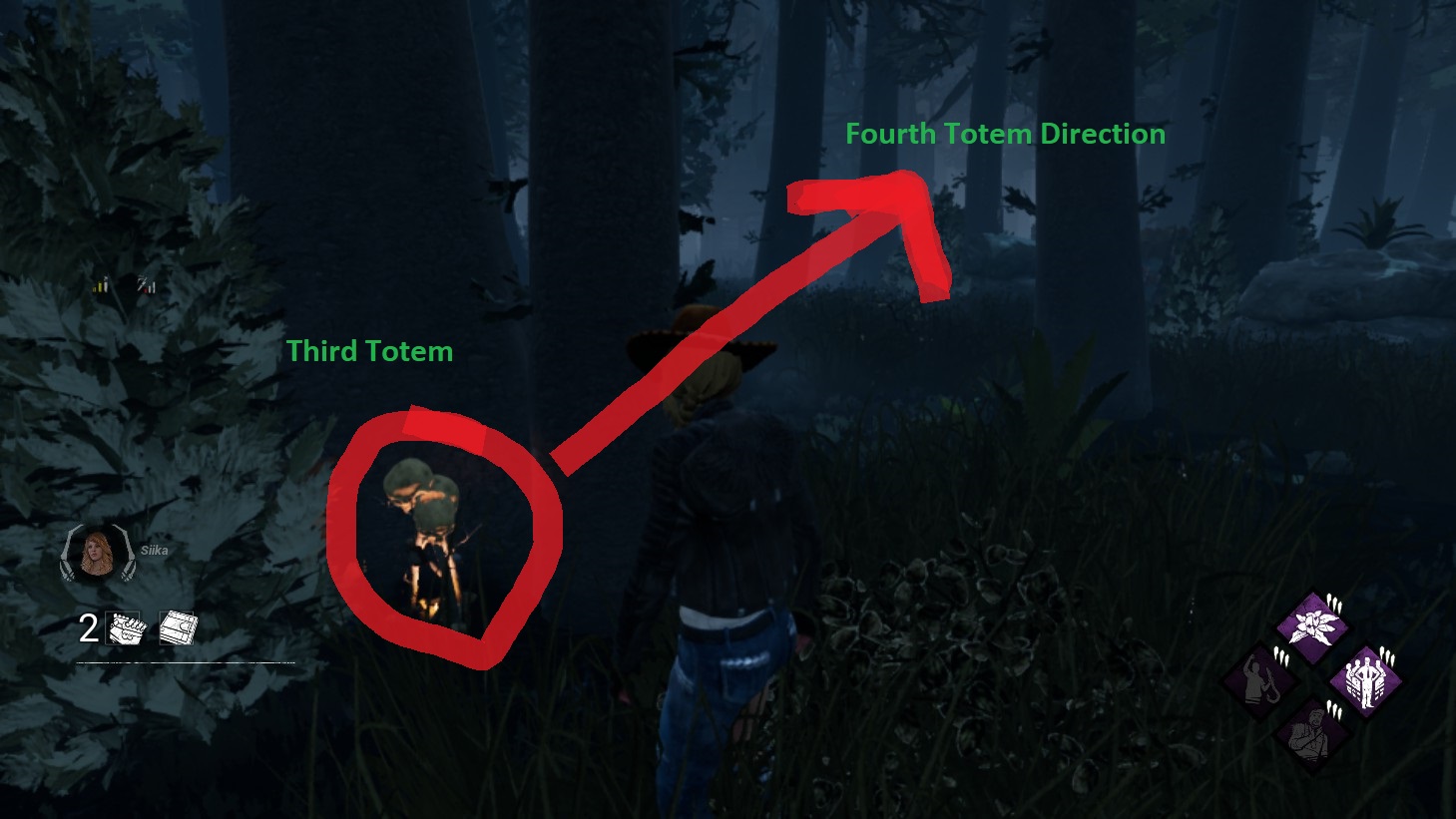 Once the next totem has been found, turn 72 degrees in your chosen direction and move toward the fourth one. It will take approximately 150-200 feet, but it is a larger map. 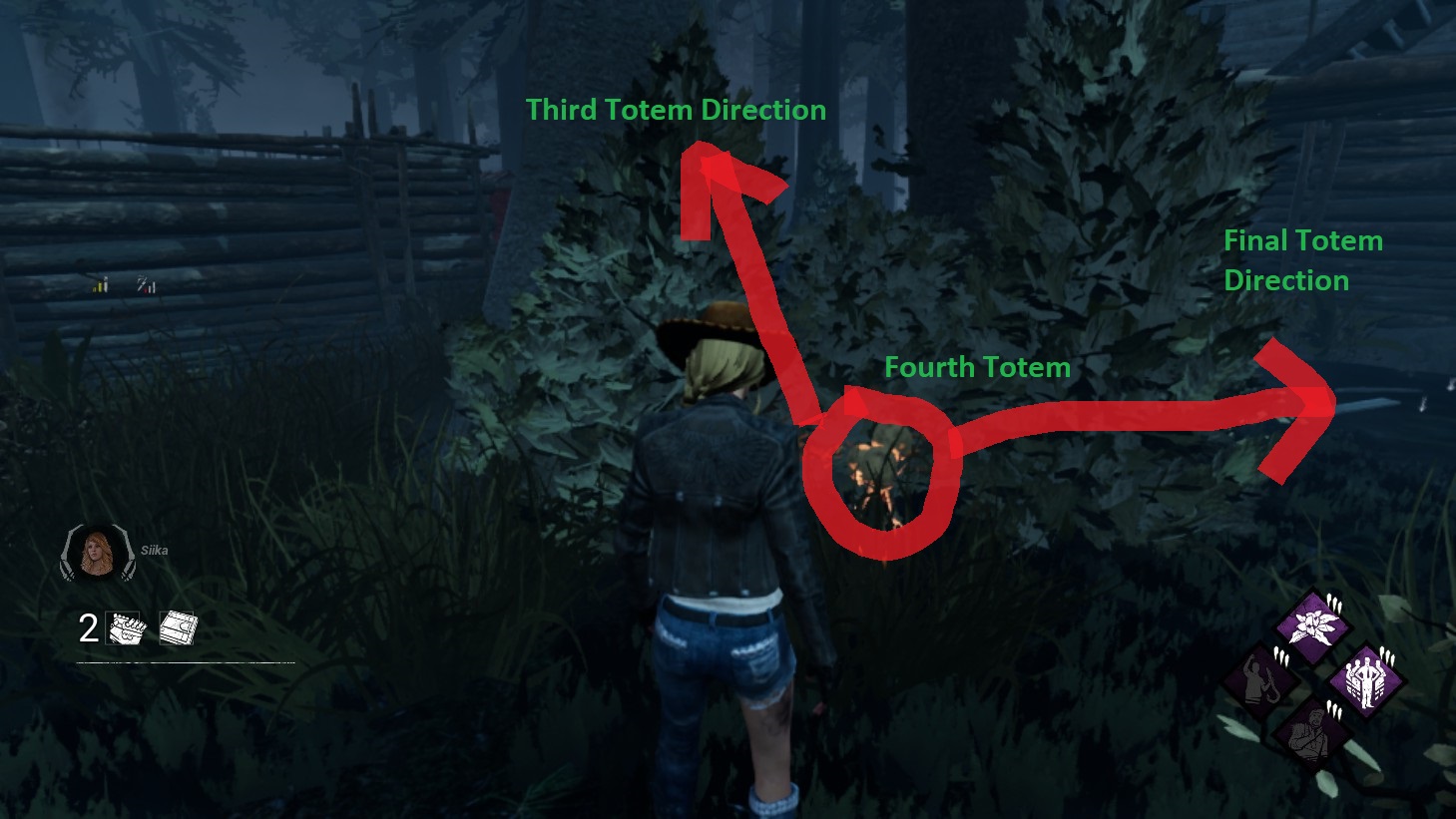 Now, for the final totem and home stretch, repeat the process at 72 degrees and travel the distance of 150-200 feet. 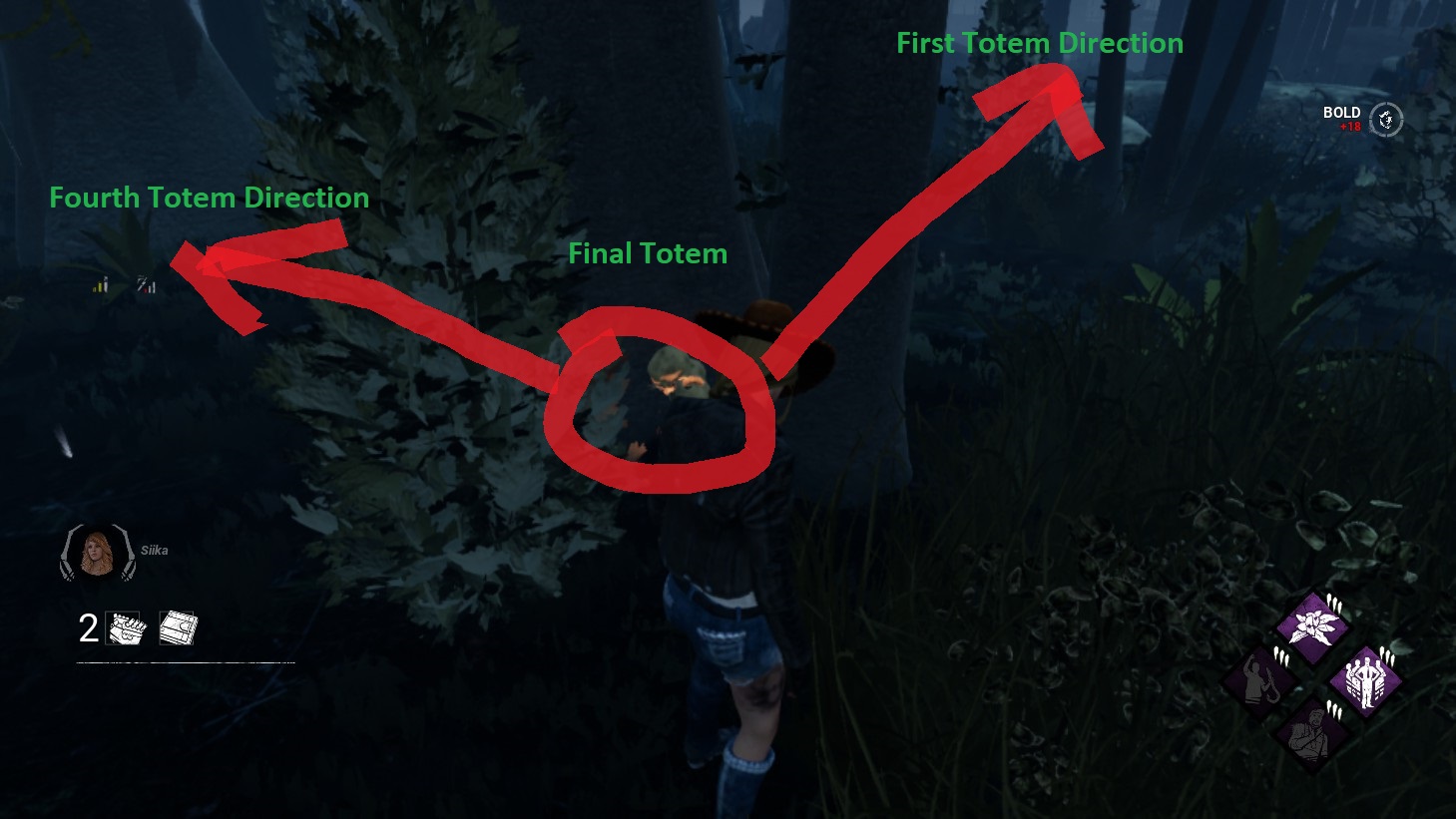 You have now reached the final totem. To prove it, if you travel 72 degrees more, you will return to totem 1.

This section is for finding totems on smaller maps, maps with multiple floors such as the jigsaw and silent hill maps, or maps with a basement or second-floor building. Also, you can find all the lovely farm maps with the corn.

You’ll continue to do the same thing as before to locate your totems. Find the first one and follow the directions to find the next one. If it isn’t on the same floor, take note and move to the next floor.

This example will be made using the game map, which has a fixed location for one totem at any given time, regardless of how many times it is joined.

Please note that the 72 Degrees direction and the distance traveled of approximately 100 feet will not change unless you are using a larger map.

ONLY A FEW MAPS HAVE SET TOTEM LOCATIONS 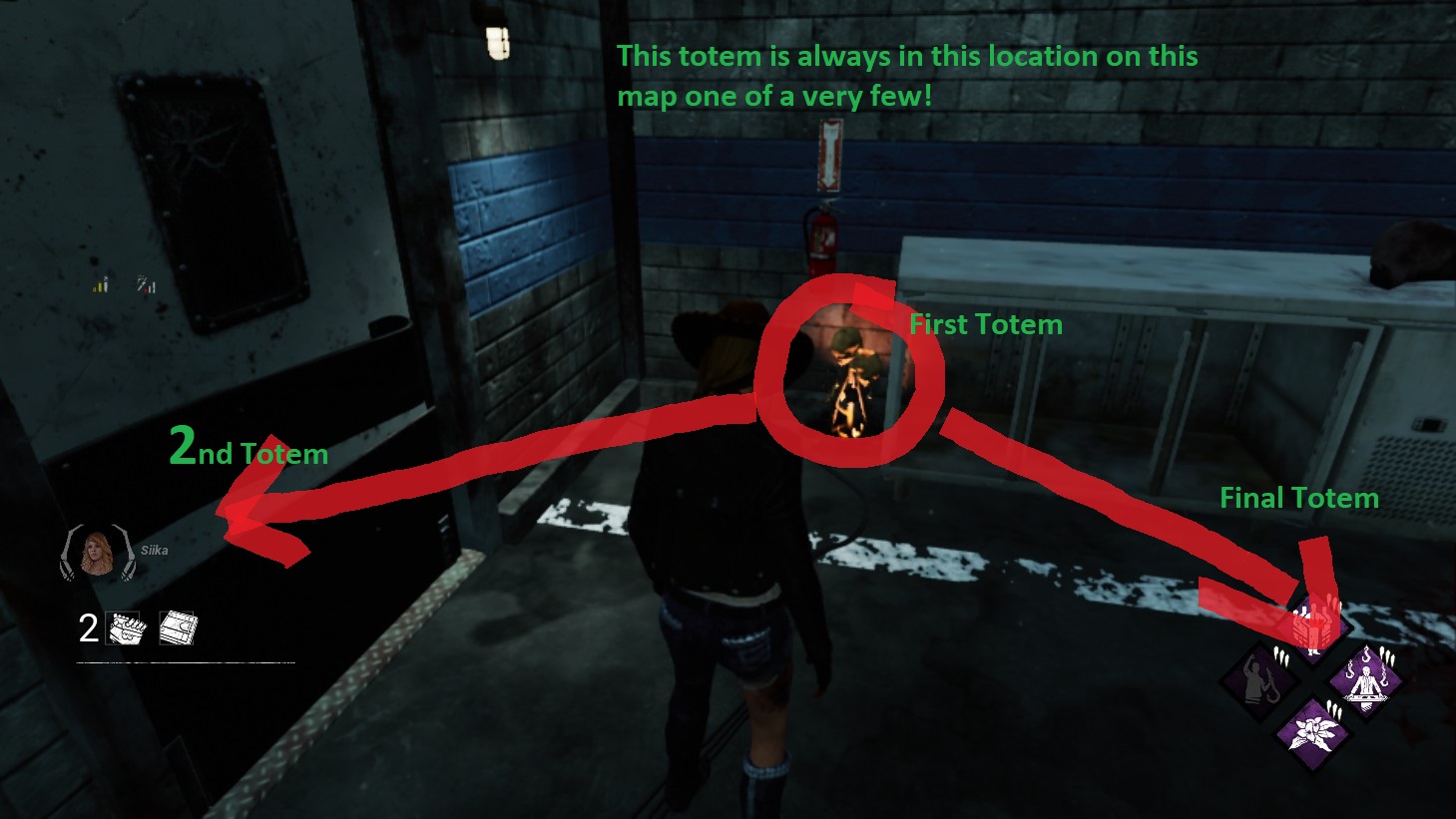 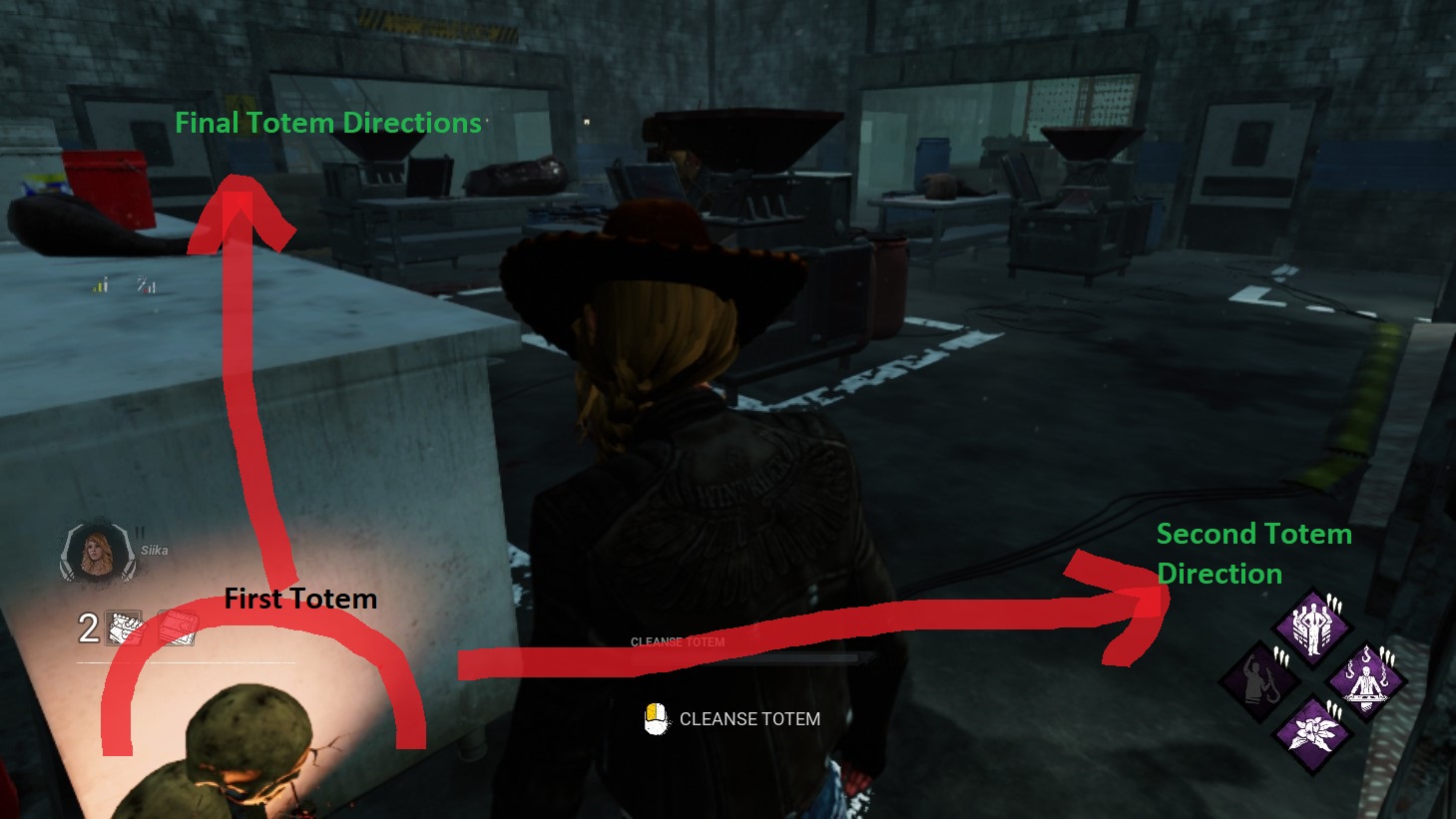 We were fortunate to be able to locate the Second Totem because it was on the same floor as us and required less travel to find. 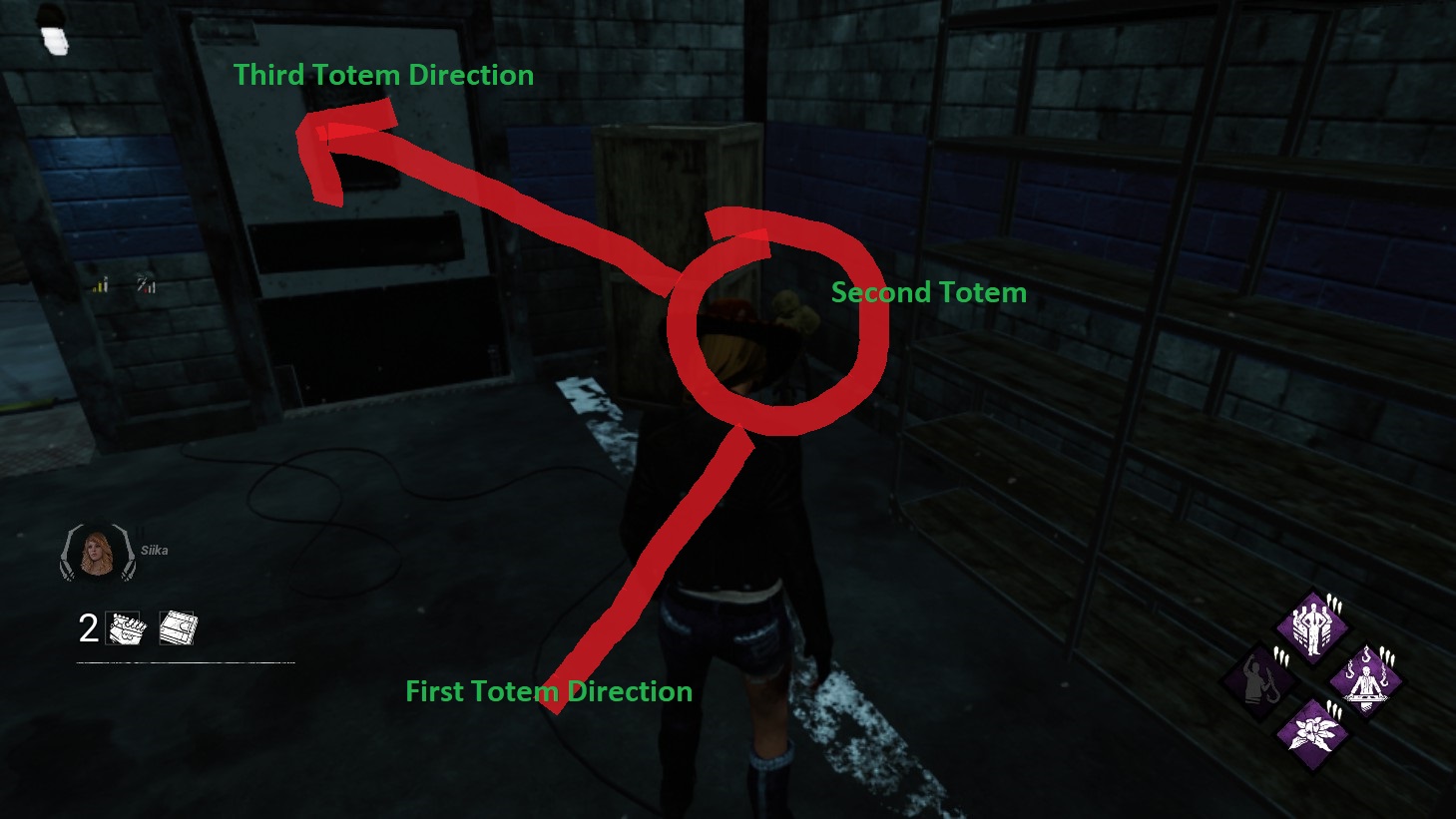 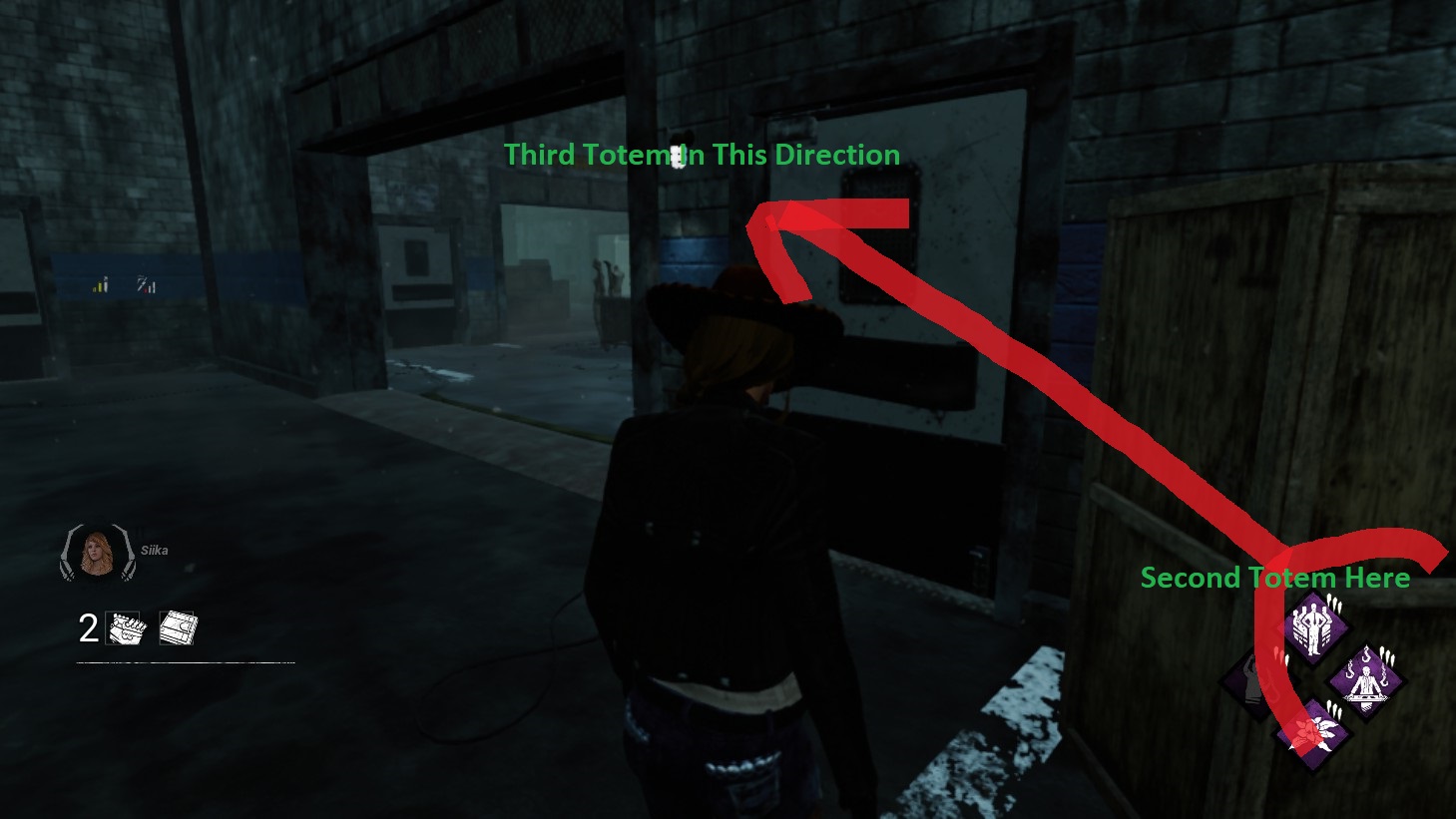 Use the 72 Degrees strategy to get to the second location. You will need to travel approximately 100 feet. Since you cannot travel that far upstairs, the totem will be downstairs. 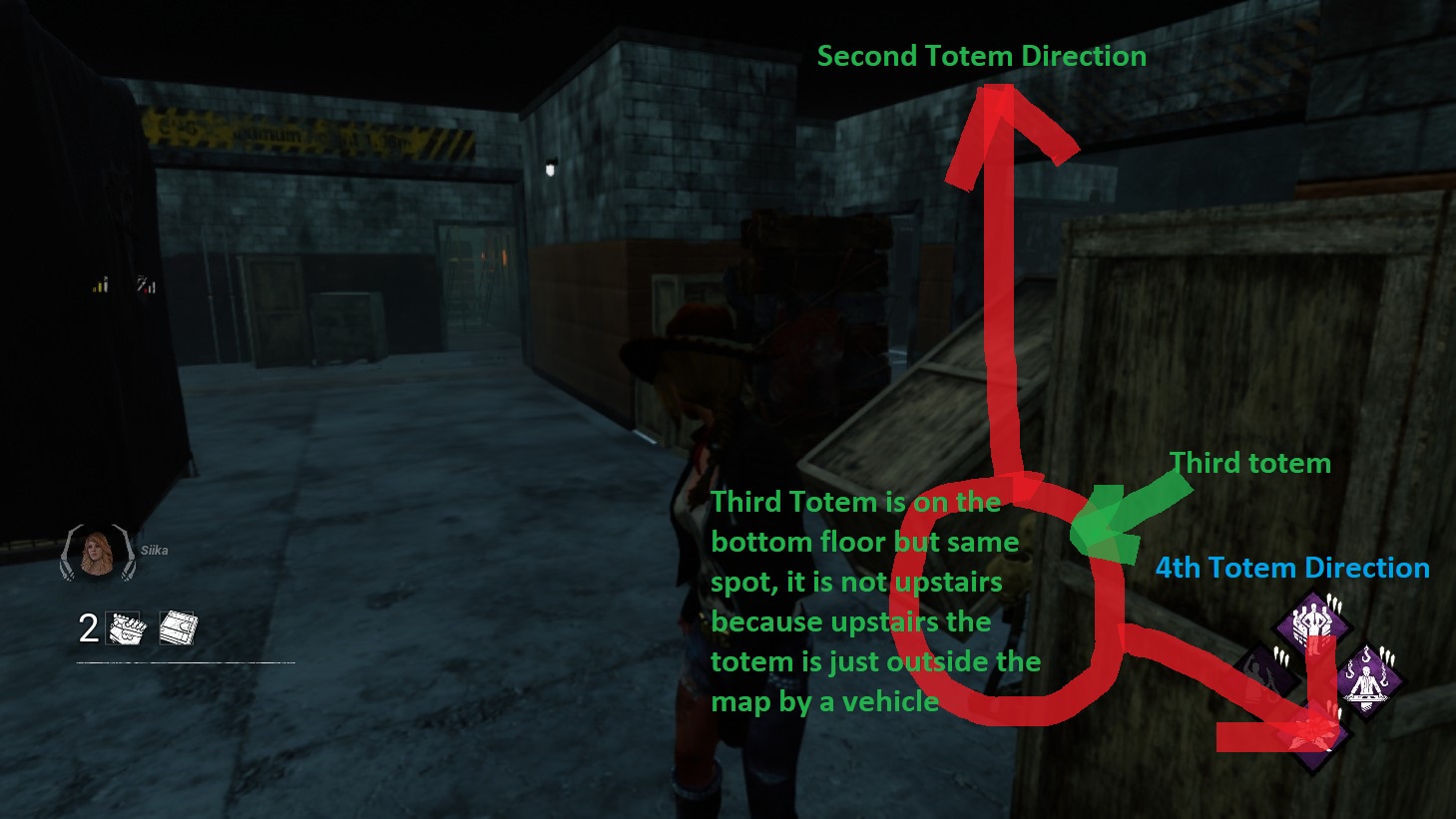 The same Strategy 72 Degrees travel 100 feet. This is where we run into the problem of going from totems 2 and 3. Going from totems 3 and 4 would also put you outside the map. You will need to switch floors. 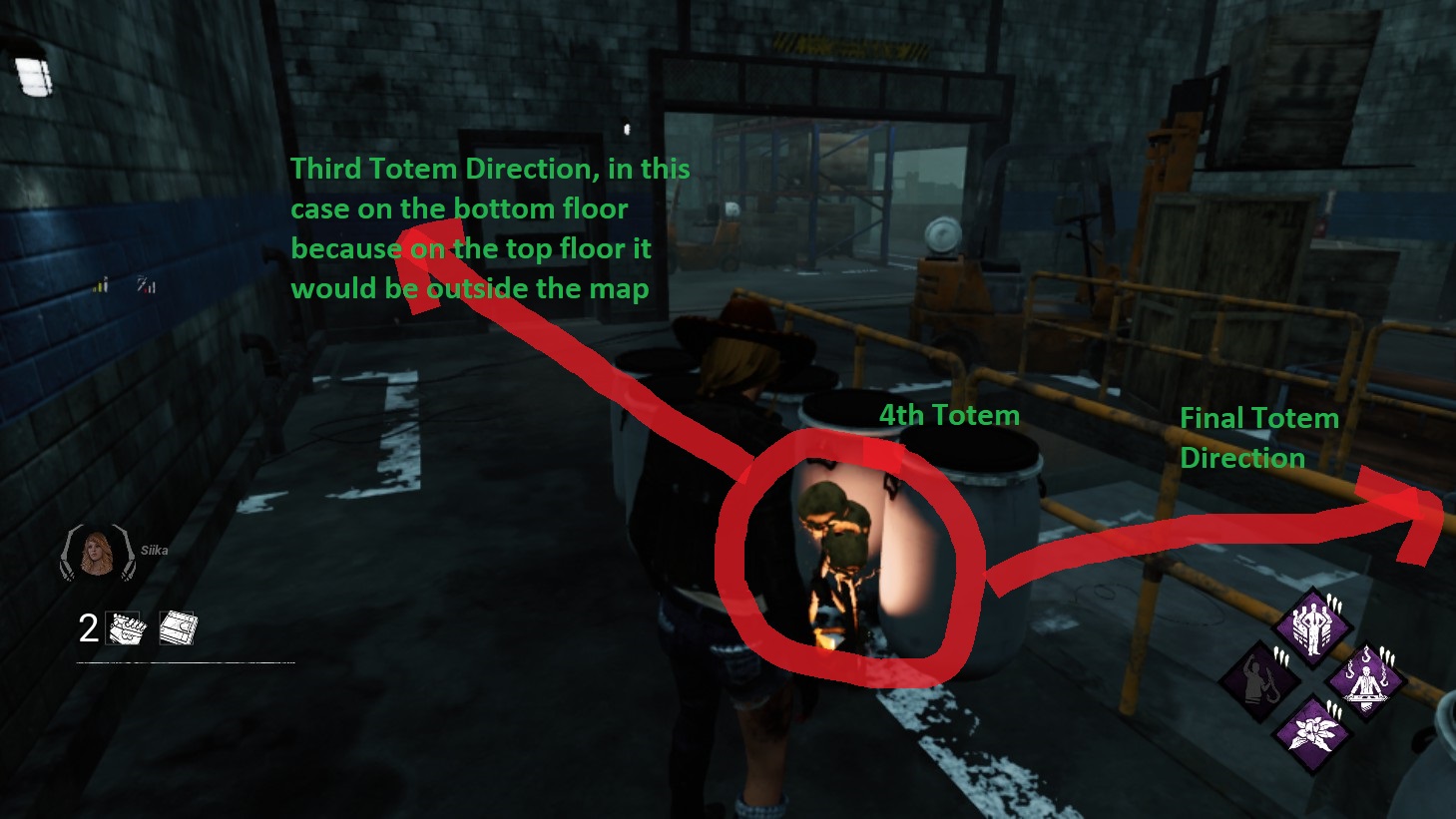 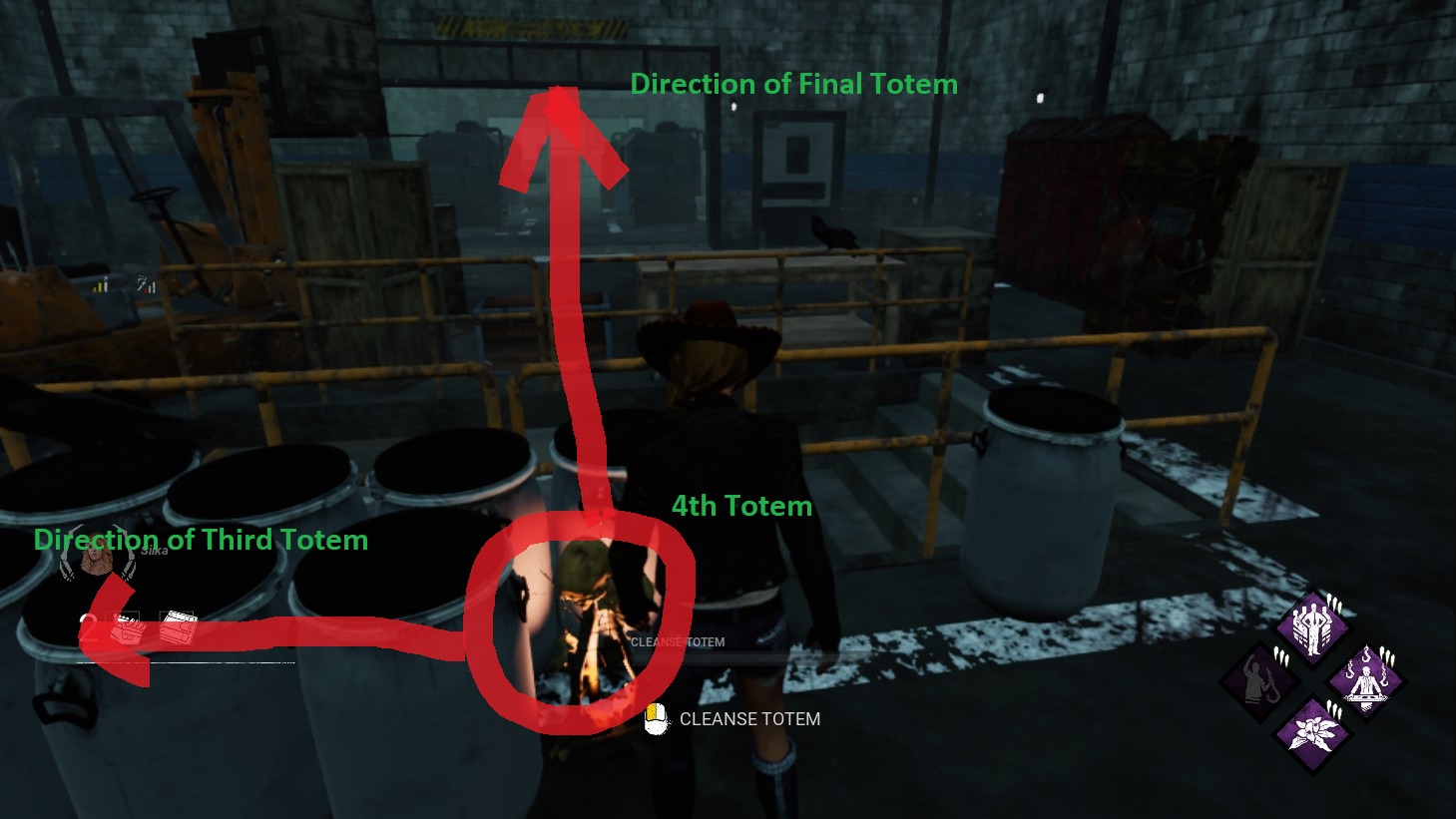 You can also travel 100 feet using the same method as the other totems. However, you will be outside the map and need to switch floors one more time to get the last item. 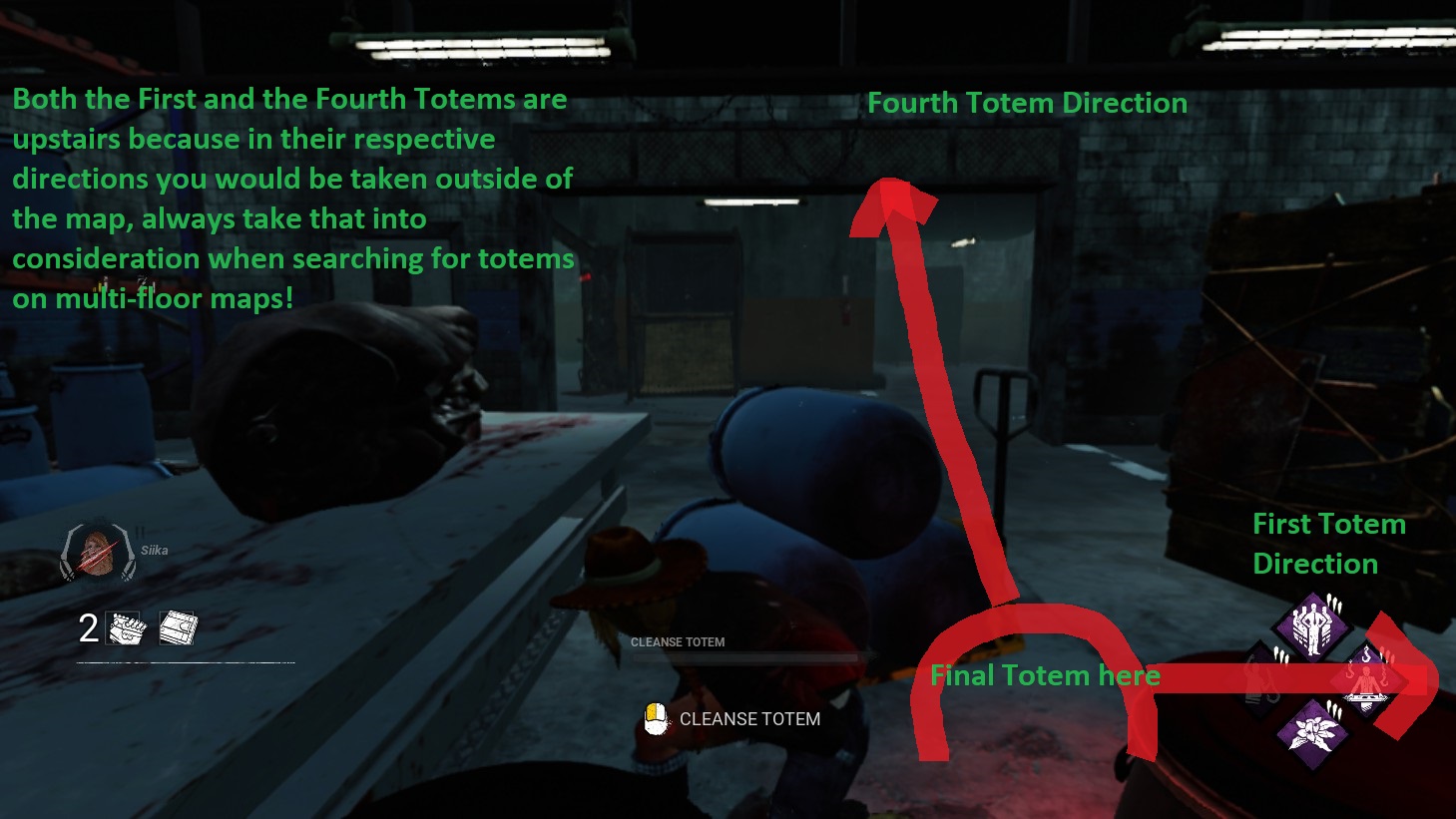 This one is trickier because it can have any number of totems on one side. You will have at least one totem on the side you start on, even though that side is the middle.

Sometimes, i have seen three on one side and one on the other. These split maps are not the same, so totems can also be found on them. I also found three in the middle and one on either side of the split maps. Each spawn on the split map will be different, and painful, but the angle at which to search is the same! ALWAYS 72 DEGREES

Distances play another role in this since alot of times(you usually travel no more than 100 feet to find the next one, except on larger maps, which i will cover in another) section. Where should a totem be located? It would not land on the map. I find that split maps allow you to perform 3 separate searches for the first items in each section.

My experience with searching for totems was that I started in the middle of the map because it split. Usually, the killer is on another side of the map doing whatever they need to set up their murder spree. 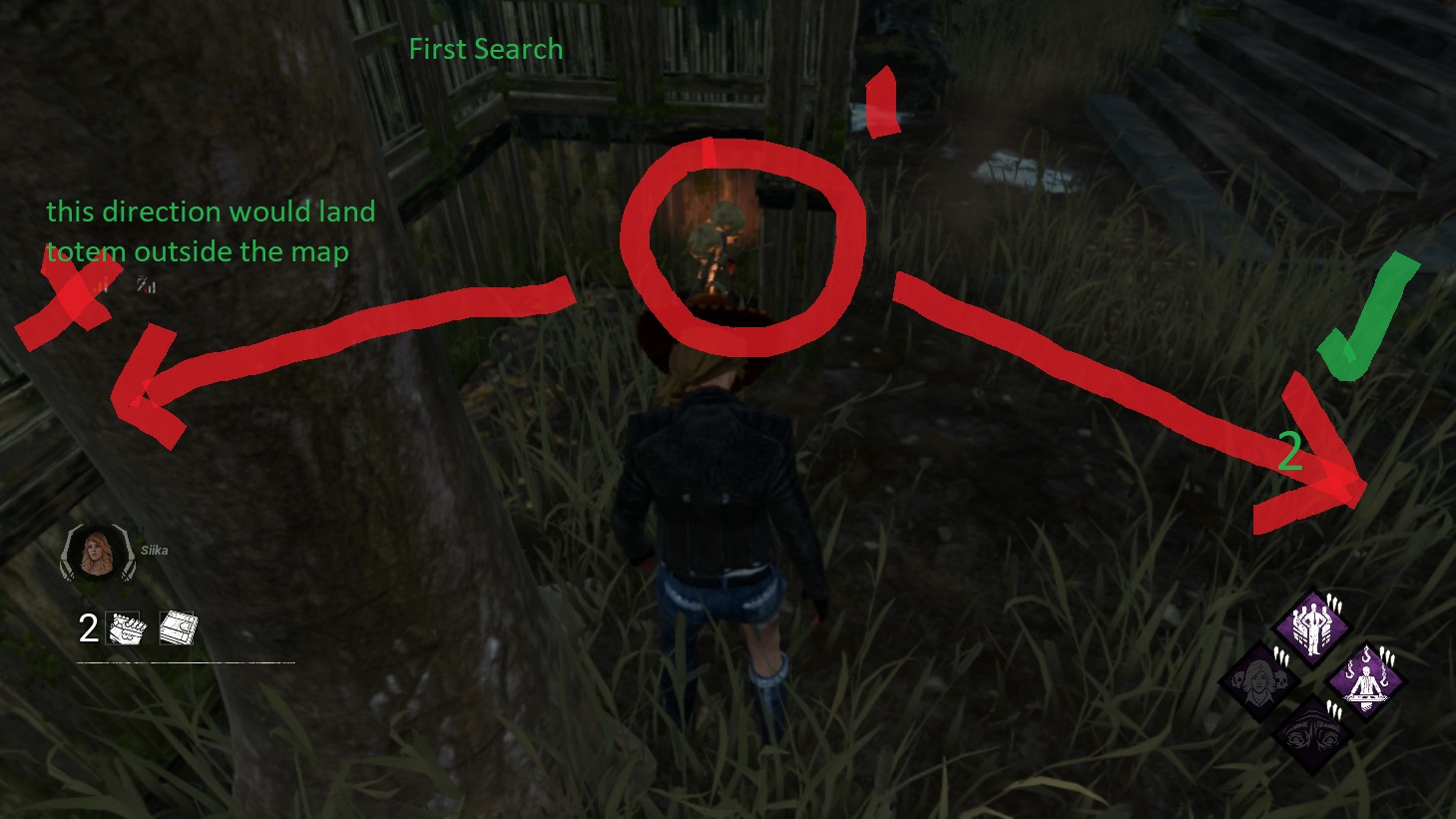 This image was looking to the left. It meant that there would be no totem in that direction. If you follow the formula of 72 degrees, it will end outside the wall. So, go in the opposite direction, as shown below. 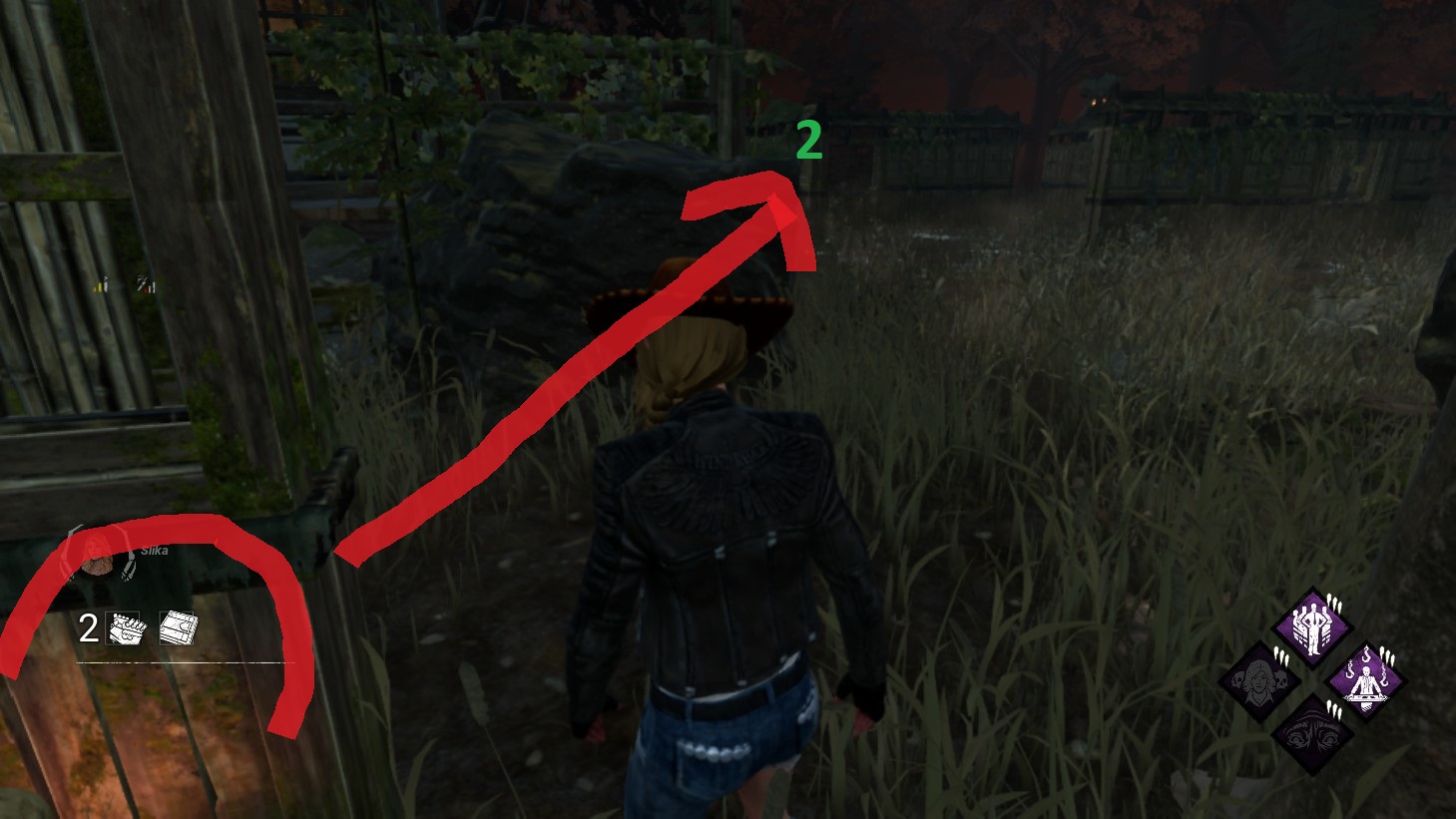 This one is well hidden in a bush 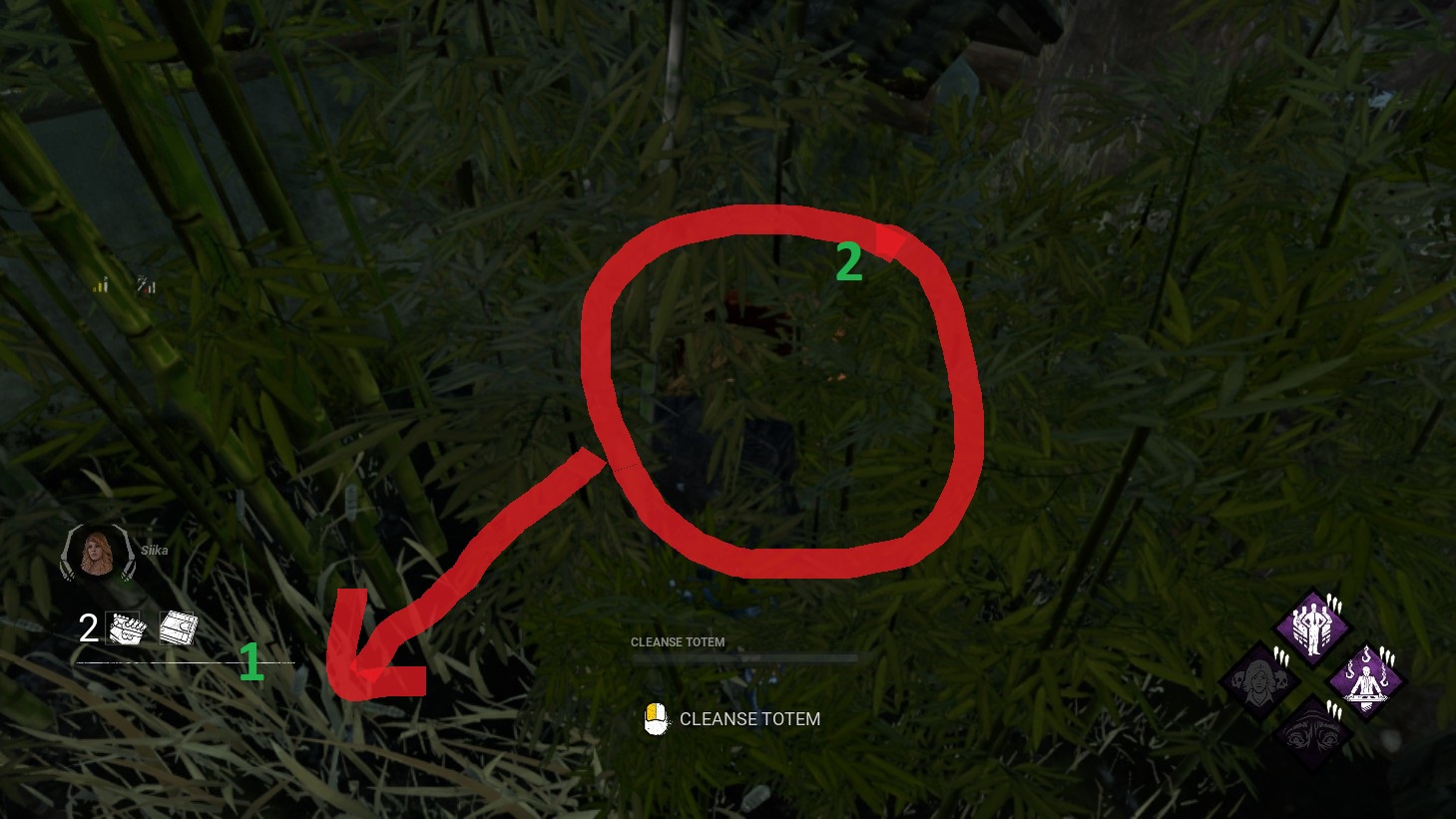 I returned to the beginning position to give you a better idea of where to look next.

This image shows me going back to the first one. If you continue looking at the same pattern and look roughly 72 degrees(to the opposite side of where you searched for) the second totem, you will end up outside of the wall. 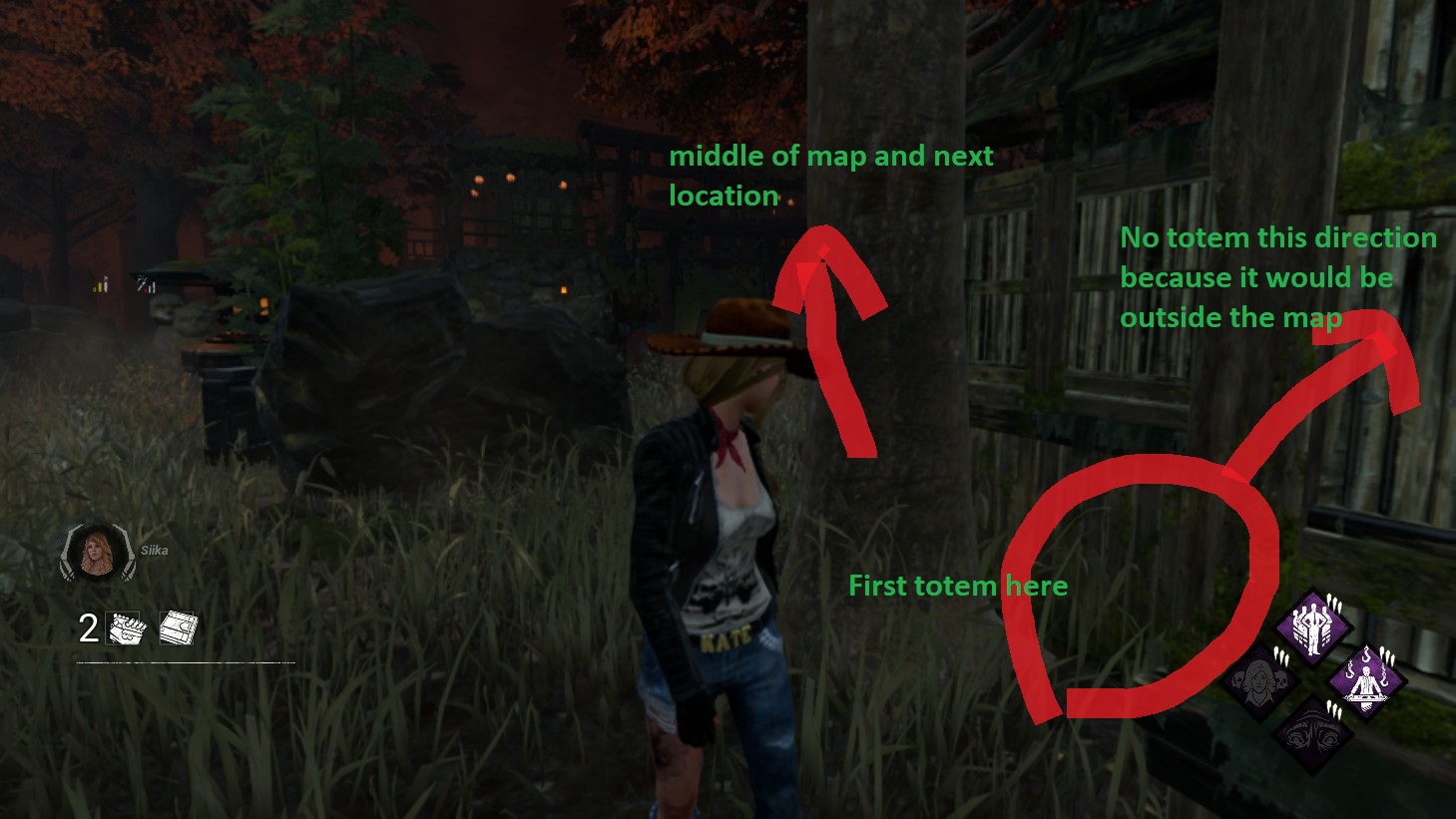 After a quick search, I found the middle location. 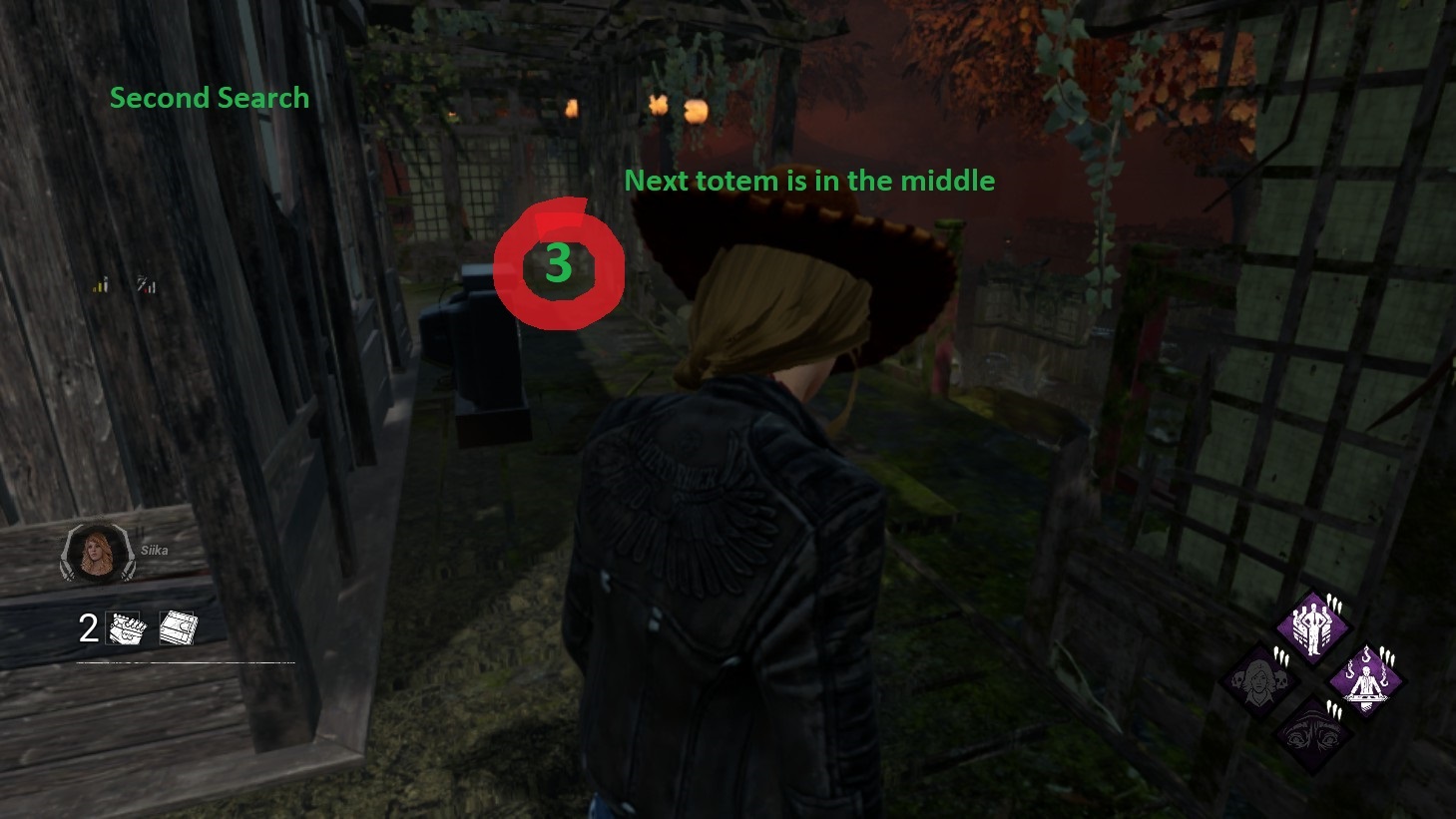 Depending on the size of your split, you might end up with a few items in this section. However, with this map, you will never find more than 1.

I now turn my attention to the final side. After a quick search, I found the 4th Totem in the middle of the pagoda.

We are forced to search to the right using the same 72-degree search pattern. Going to the left would result in you being outside the wall again. 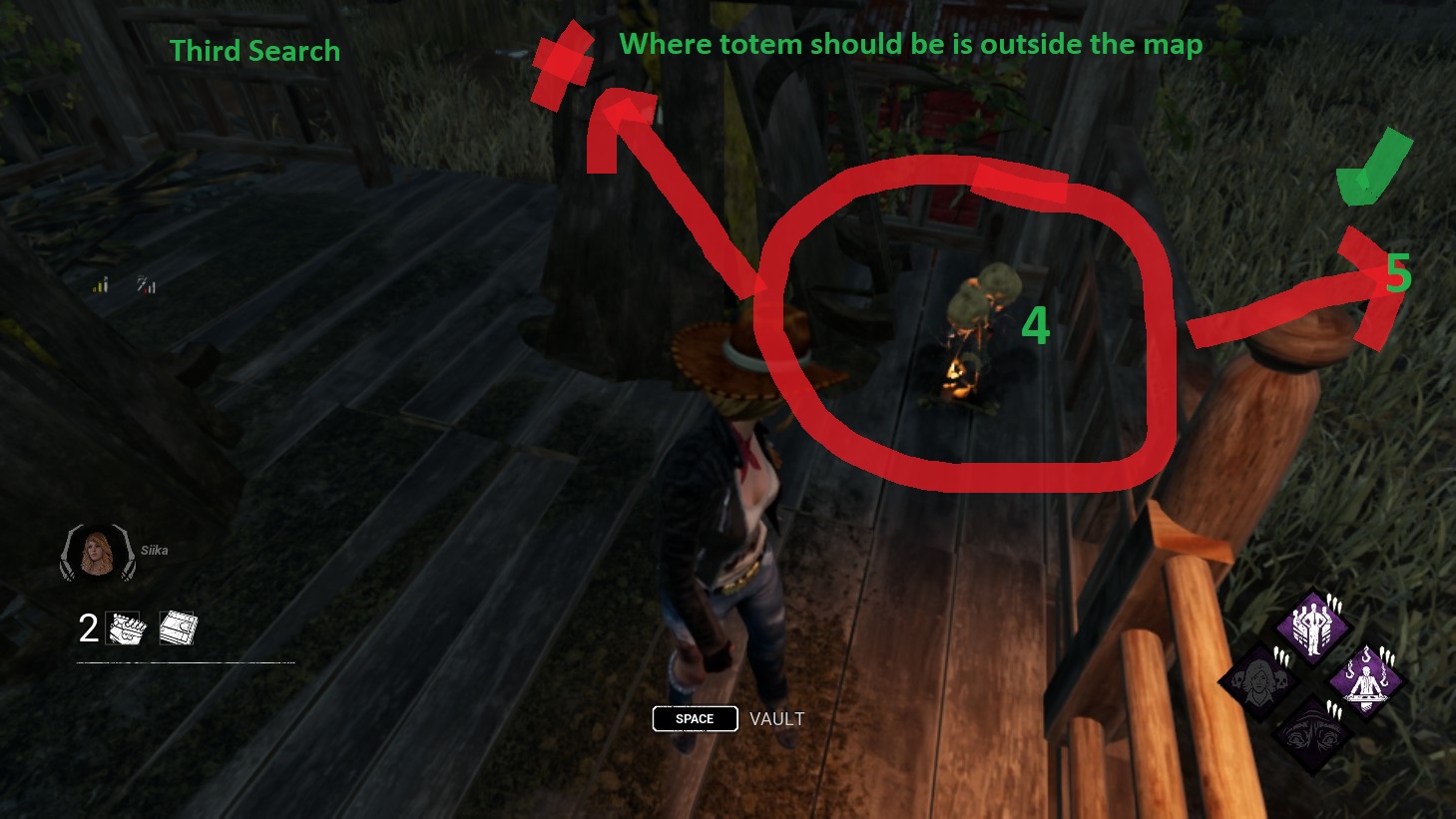 I found the last location of the killer shack with my last totem, which led me to the final location. 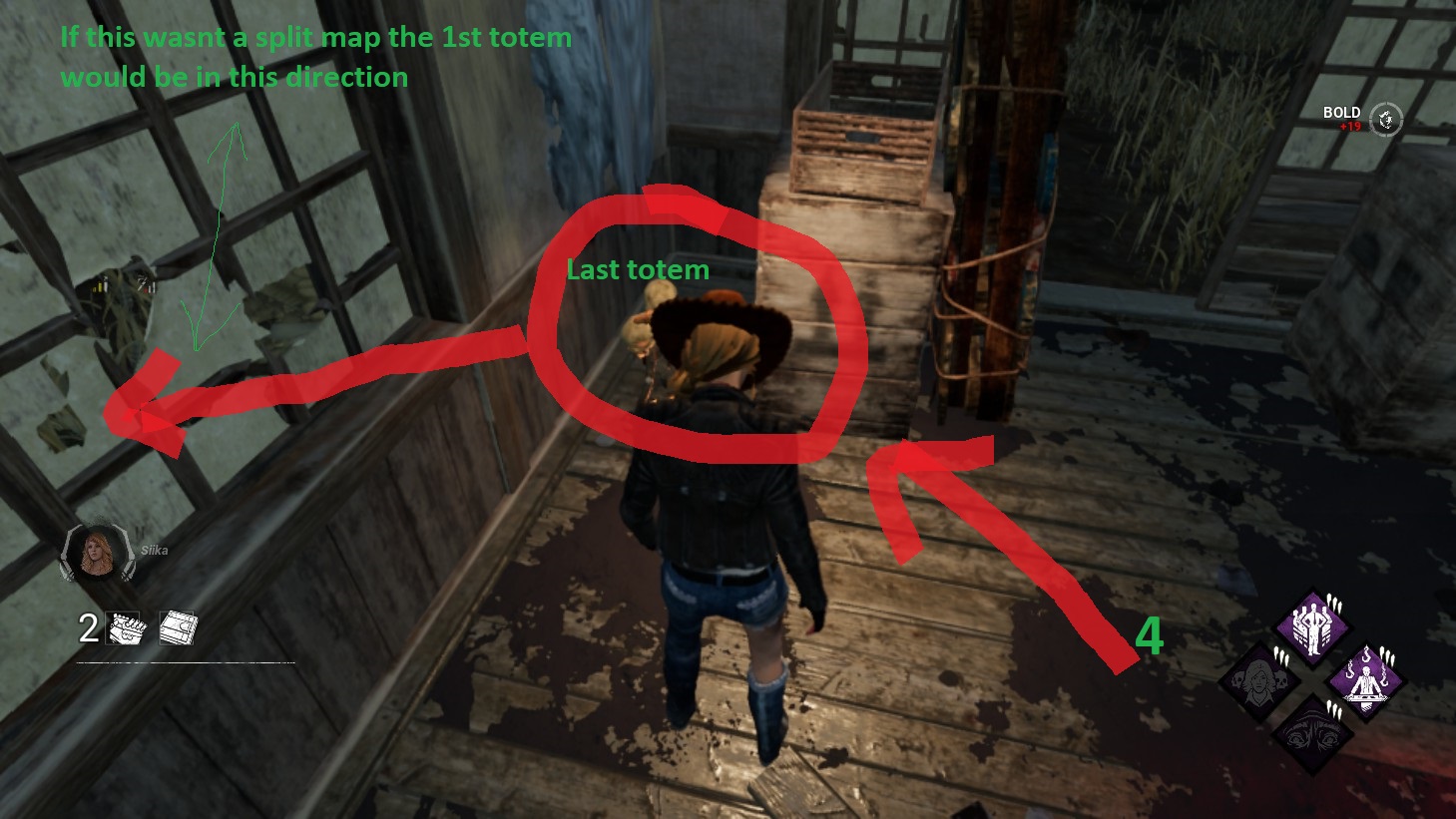 As I have already described, you can expect to travel approximately 100 – 200 feet, depending on the map size.

The anomaly map is not a pentagram shape but a diamond. This is due to the placement of map tiles as you load into the map.

Travel distances will remain the same,

As you can see, this illegible anomaly placement has 3 sides that are longer than 2 others. This is totally acceptable. The search will proceed as before. When you locate the first one, turn 72 degrees and move 100–200 feet, depending on the size of the map.

As you look, this is the section that is more recognizable. The same path will be taken, but the distance will be significantly shorter. It need not be 100 feet long; it can be 20 to 75 feet short. It might take a little longer to appear on the larger maps.

You’ll understand what I mean once you’ve played a few of these games and feel as though you’ve lost one. Nevertheless, regardless of how long the sides are, it starts to feel normal after a few games!

This is all about Dead by Daylight – Where to Find Totems; I hope you enjoy reading the Guide! If you feel like we should add more information or we forget/make a mistake, please let us know via commenting below, and thanks! See you soon!