This guide will help babies like me avoid getting slaughtered by the enemies of Chapter 2.

Note that the guide contents are sorted by power level, so the guide will go from weakest to strongest.

Savages are- well unless you’ve been living under a rock and haven’t left the Dry Meadow until Night 50 you should know what these are. Drop Rags, Pills, Sticks, or Alcohol on death. Nightly Behavior: The same as their behavior in Chapter 1, though they’re more rare in the Swamp and are less likely to appear.

Human Spiders are terrifying enemies, but don’t let that make you think they’re strong. These enemies can be killed swiftly, but pack a punch. Human Spiders can multiply. (Yes they actually can and it is just as horrific as it sounds) They do this by tossing a torso which will make a shrieking noise similar to a villager’s, and will then turn into ANOTHER HUMAN SPIDER. Drops Odd Meat on death. Weapons to use: axe or ranged weapon. Ranged weapons are suggested. Nightly behavior: Will break down barricades on sight.

Swampers are reptilian enemies that hide under shallow swamp water, Can become fully submerged under water and be invisible within the player’s vision. The only way to tell they are present is their splashing in the water, which can also be seen. Swampers can fire a ranged attack which can cause an effect similar to the chain trap, only allowing the player to move within a certain area. Drops Odd Meat on death. Weapons to use: An axe or powerful ranged weapon should be used. Nightly Behavior: None, I’ve never seen these appear at night.

The same Huge Dogs from the Silent Forest and Old Woods. The only difference being that they are more aggressive during the night. Drops Odd Meat on death. Weapons to use: Ranged, though an axe will still work, their only method of attack is by biting you so melee is not suggested.

Mushroom men will hide in the ground and cannot be spotted until they emerge from the ground. Mushroom Men can be detected by their distorted giggling (yes they freaking laugh when they chase you down) and will explode upon getting near the player or if they have lived for about 10 or 15 seconds. Their limbs will fly out into the vicinity of the explosion and can damage the player upon impact. Drops Odd Meat on death. Weapons to use: None, just run, they’ll explode eventually. Nightly Behavior: None. (Sidenote: I’m pretty sure these will attack any enemy near them, since I believe I saw one kill a Huge Dog)

Centipedes are humanoid in shape with an arm shaped like a centipede’s head, similar to a claw. Centipedes can hide inside the holes that can contain meat and odd meat. (Sidenote, i believe this can be detected before approaching the hole by checking if bugs are crawling out of it.) Can burrow under the ground and jump you from behind or beneath you. Drops Odd Meat on death. Weapons to use: axe or ranged weapon. (Note that they have a semi-ranged attack that hit you from a distance, ranged weapons are advised.) Nightly Behavior: Will burrow under the player. How to prevent it’s arrival during the night: Break a glass bottle and stand on top of the shards, the glass will kill it before it can deal any damage.

Red Chompers in the Swamp behave the same as they do in the Old Woods. Drops Odd Meat on death. Weapons to use: Ranged, since Chompers. Red or Black, have a lot of health and a powerful ranged attack that can decimate barricades and unprepared players. Nightly Behavior: Will shred any barricades they can reach, they do not need to be provoked in order to do this. They are basically the moose of Darkwood. 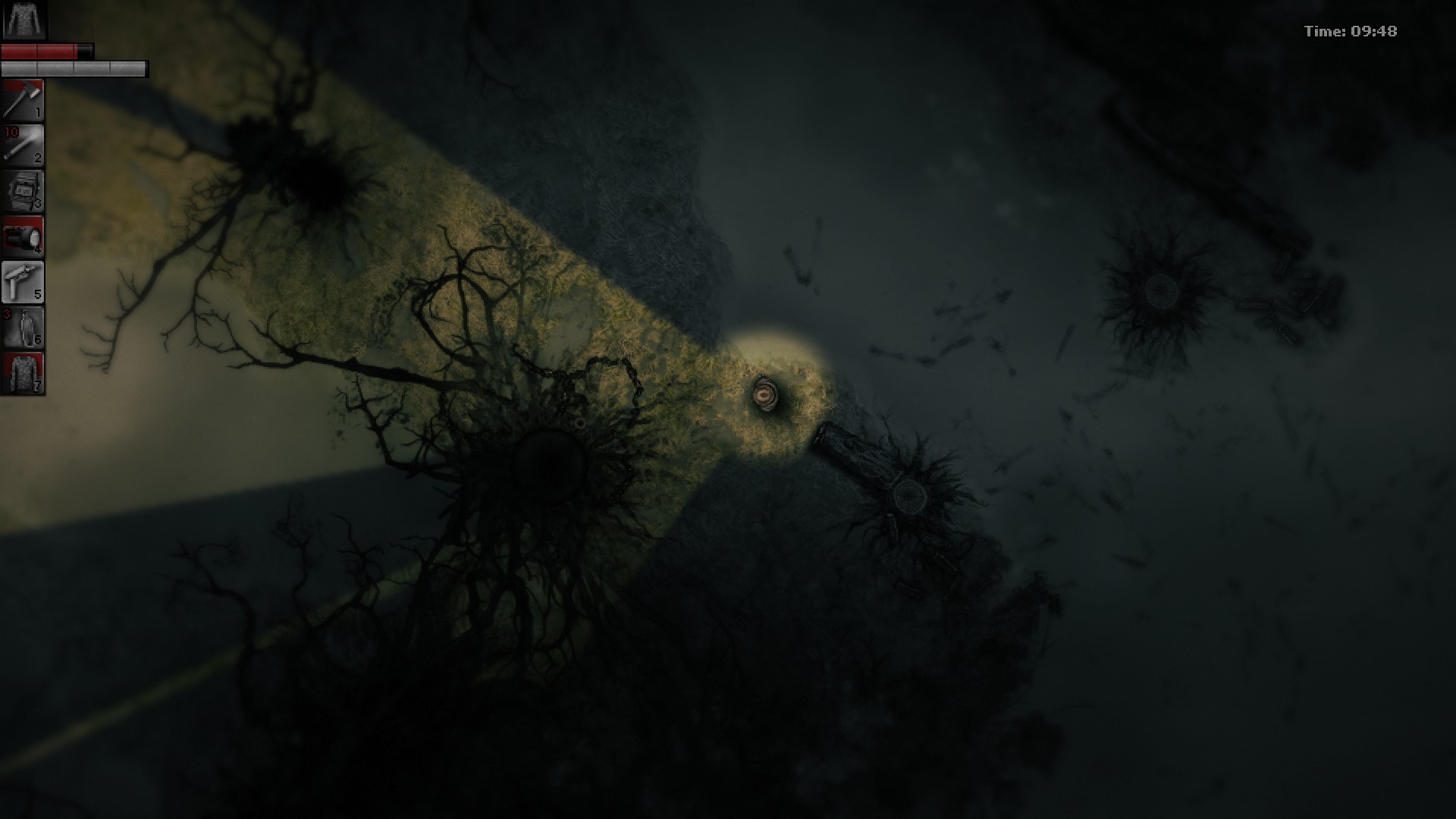 Vines make an odd gushing noise similar to mushrooms and are usually near trees. Upon being detecting the player will latch onto the player for a minute or so, giving a poison effect in the process that lasts until the vine dies. This can kill the player if they are at low health and deals enough damage to drain your health by 2 thirds (with the vitality upgrade).

I hope you enjoy the Guide we share about Darkwood – Chapter 2 – Swamp Guide; if you think we forget to add or we should add more information, please let us know via commenting below! See you soon!