Becoming a pro web slinger can be tough. Achievements won’t help with that but maybe you can brag to your friends probably not. 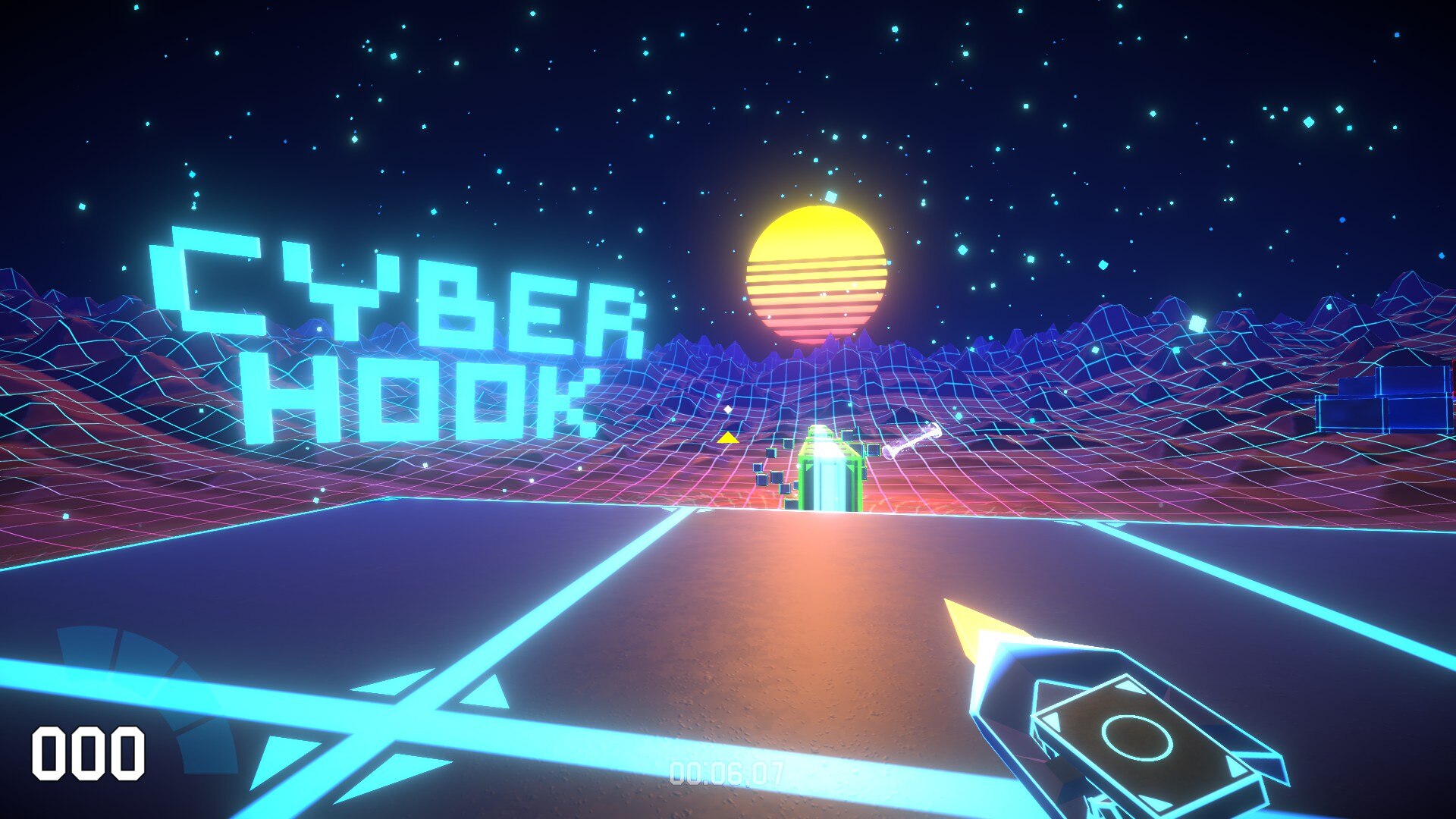 I found Cyber Hook to be a pretty fun and frenetic completion despite my lack of experience with 3D platformers and parkour games. Unfortunately, the resources for figuring out its achievements are inconveniently scattered across Steam and elsewhere, so I decided to make room here for my first-ever achievement guide.


Lemme say right away that most of the achievements in this game can be earned through sheer skill and perseverance. There are some cryptic achievements that I have some useful tips for, but most of the journey will be on you. Please don’t expect a sleep-deprived 22-year-old to make you a god at the game. Get a feel for the gameplay yourself and only look here if you’re stumped or just bored or something, I dunno.


Oh, and unless you really want to perfect this game, ignore the “United Airlines” achievement. You’ll see what I mean when we get to it.

As mentioned before, playing through the story should net you over half of the achievements. I’ll cover those achievements here as a formality. Feel free to skip this section if you just want advice on the trickier stuff.

This should unlock once you go through the first portal in the game. Nothing more to say.

Play until you’ve earned all your abilities. Focus on getting used to the gameplay at this part of the game — a lot of the 3-crystal times in the first chapter will kick your a*s if you go for them now. I speak from experience.

Yep, that kills you

Self-explanatory. I’d be blown away if you didn’t get this at some point during your playthrough.

At least it’s a “nice” number

The funny number has arrived and I am therefore obligated to laugh. Ha. Ha. This achievement should unlock through natural progression unless you’re a speedrunner using a smurf account or something.

Again, unless you’re The Human Spider in real life this should happen naturally. Keep in mind you can double tap “R” to quickly restart.

The number might seem intimidating but you’ll most likely hit it if you’re going for all crystals or even if you’re playing the game casually. If you don’t get it by the end of the game, just sit in a level and spam “R” until the achievement pops.

Get 3 crystals on a level

You should be able to earn 3 crystals on the first level even if you play like an orangutan. The game has plenty of lenient 3-crystal times after that as well.

Beat your personal best time on a level

You’ll definitely revisit a level at some point for more crystals, so this will happen naturally.

Ain’t got timewarp for that

Clear a level without using timewarp

Much easier to do on the early levels. If you’re going for fast times, you’ll only want to use timewarp for the extended range anyway.

Saying no to the green stuff

Again, should happen naturally, though I should mention that it’s often faster to swing around green blocks instead of breaking them. If you need to grind this achievement, go to a level like The Game (The End) and shoot everything you see.

The number here is realistic for a casual playthrough, unlike a certain other achievement, so you should earn this through natural progression. You’ll be spending lots of time in the air anyway.

Play until you unlock all the chapters and witness the underwhelming finale. The achievement should unlock once you head back into the game from the title screen. You’ll need to collect a hefty number of crystals but I believe in your sport.

Alright, let’s move on to some actual achievements. These ones still aren’t difficult, but you’ll have to go out of your way to earn most of them. Knowing how to unlock them easily can give you a little edge to complete the game that much sooner.

Snoopin on the pros

Due to the competitive design of the game, some of you might think to do this without the need for achievement. In case you don’t know, you can access leaderboards from the level select screen. From there, you can download and watch the best run of anyone you can see. Watch someone from the top three, cry about how you’ll never be as good as them, and move on.

Isn’t it a bit narcissistic ?

Watch your own replay

This involves a different process than earlier unless you can get on the leaderboard yourself (much easier to do with the national leaderboards), which then you can select your own replay from that list. If not, then click the “Save Replay” button from the results screen of any level, then watch that hot trash from the main menu.

This one’s a piece of cake but I’m putting it here because it’s easy to mix up with “Relief at last!” All you have to do here is beat a level ten times. You’ll probably earn this one trying to collect more crystals in any given level.

Clear a level after retrying 10 times

The requirements for this achievement are misleading, so listen carefully. You’d think that earning this achievement would entail retrying ten times and then clearing the level, but that’s not the case. Instead, you must beat the level ten times in a row, hitting the “Restart” button after every attempt. You must hit the “Restart” button on the results screen. Double-tapping “R” won’t do. If you need to grind this, load a short level like Xitra (The Mastering) and clear it ten times, making sure to hit “Restart” every time.

You probably won’t earn this achievement through natural play unless you know speed tech or ate Sonic the Hedgehog limited edition blue curry before playing. Fret not, for there’s a simple trick to pull this off. Go to the hub and find the long square walkway. Start running down this walkway and your speed will gradually increase. If the corners start to feel tight, slow downtime to make turning easier. After a minute or two of uninterrupted running, you’ll reach 343km/h.

There’s a chance you might earn this on a casual playthrough, though you’d have to spend a lot of time on the ground. In case you don’t, performing the same trick you would for “! SONIC BOOM !” will earn you this achievement in a matter of minutes.

Download this level from the Steam Workshop and play it. – [steamcommunity.com]  Yes, I’m serious.


This achievement blows. The number is completely unfeasible for even a completionist to earn on a full playthrough. Only speedrunners who dedicate tons of hours to practicing would earn this achievement through natural play. Of course, not everybody can be a speedrunner. If you’re desperate to complete this game without playing it for five times its intended length, then load this workshop level, hop in the funnel, and go watch Rush Hour or something. It took me a total of 80 minutes to earn this achievement, so settle in for a long afk session.


I’d agree if we were talking about a skill-based achievement, but this is just a mindless grind. If you still don’t want to rely on workshop tools for achievements, then I guess you could weigh down your “W” key and keep falling off the map while you sleep. If that’s still too “cheap” for you then just play the game until you get it, I don’t care

The hardest achievements in the game, and unfortunately the ones I have the least practical advice for. It took me around five hours to earn these achievements, but I know I’m not everyone, so I’ll do my best to offer both general and specific tips to help you through in case you’re struggling.

Get 1 star for every level

The 1-crystal times are typically generous, and I could see someone earning this achievement simply by beating all the levels without caring much about time. I’d recommend adopting that sort of playstyle if you find yourself stumped by the tougher 2-crystal and 3-crystal times.

Get 2 stars for every level

Get 3 stars for every level

The 3-crystal times vary drastically between levels. Some might take you one attempt, while others might take you over an hour. I can’t offer you level-specific advice here, but I can present some general tips I picked up while playing, as well as some useful stuff I learned from other difficult games:

Thanks for reading, and I hope you all enjoyed yourselves and learned something. Hopefully, the next patch doesn’t make this guide obsolete lmao


Here are a few sources I consulted while making this guide:

Hope you enjoy the Guide about Cyber Hook – Titanfall – Miles Morales Achievement Guide, if you think we should add extra information or forget something, please let us know via comment below, and we will do our best to fix or update as soon as possible!