Cry of Fear was intended from the start to be more than a simple run and gun game, and like Afraid of Monsters, it contains some rather unique puzzles. This guide’ll show you all puzzles and how to solve them.

In the very first level, escape is blocked by a padlock, locked with a combination code. The player must head towards the Town Square and retrieve a username and password for a computer in a nearby cafe. Once unlocked, the computer reveals the code for the padlock.

This puzzle was added into the game to stop players simply googling the combination to the padlock and bypassing the area entirely, as the team put a lot of effort into designing the town square area, and wanted players to enjoy the effort they went to in crafting the map, and designing the church. The username and password are pre-picked randomly from one of 32 possible options (16 usernames and 16 passwords), and an algorithm then generates the final code, meaning it will be different on every play-through. 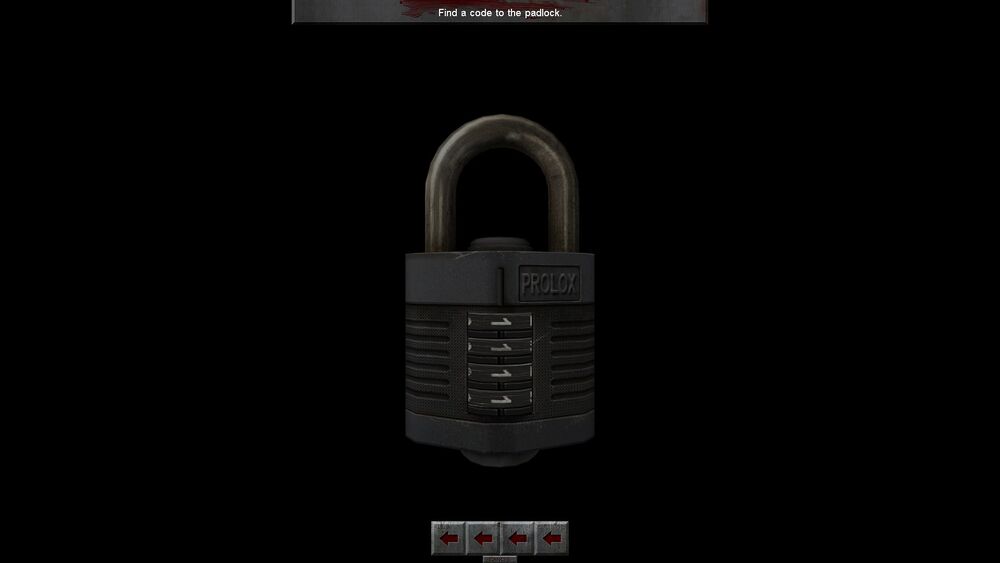 After entering the apartments to help the unknown caller, and finding him dead, Simon’s objective switches to escaping the apartments. Firstly, Simon retrieves the basement key, floating in the water next to the corpse, and uses it to gain access to the basement, which is locked. In the basement, Simon retrieves a videotape and must head back to the predator’s apartment to play it. Upon playing the tape, Simon will be greeted by a video of the predator decapitating an individual with a pair of gardening sheers. The decapitated body falls onto the floor, and the camera pans over to the front, revealing the exit code for the elevator. As with the padlock, the code is randomized on every play-through (although the final digit is always 9) to prevent the area being bypassed. 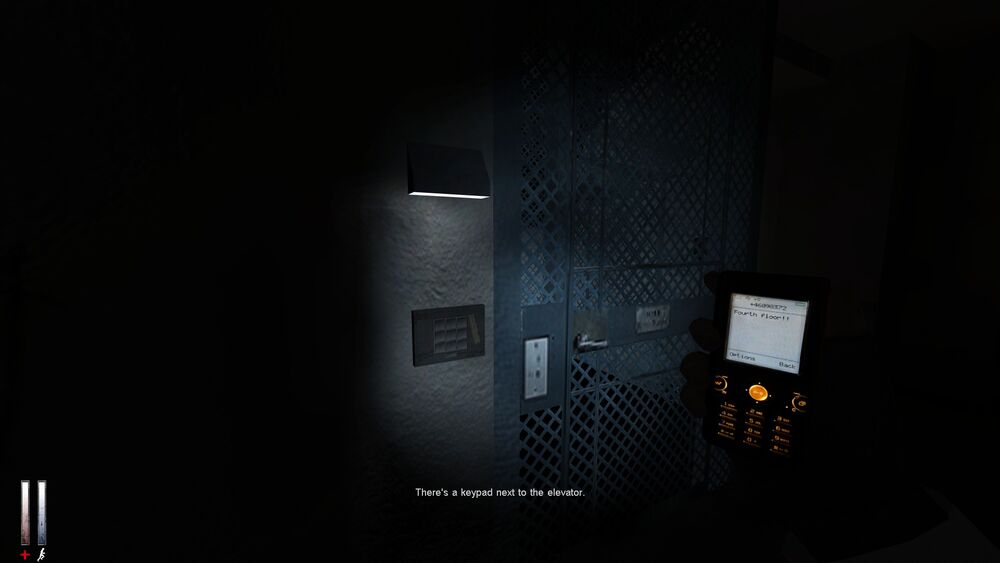 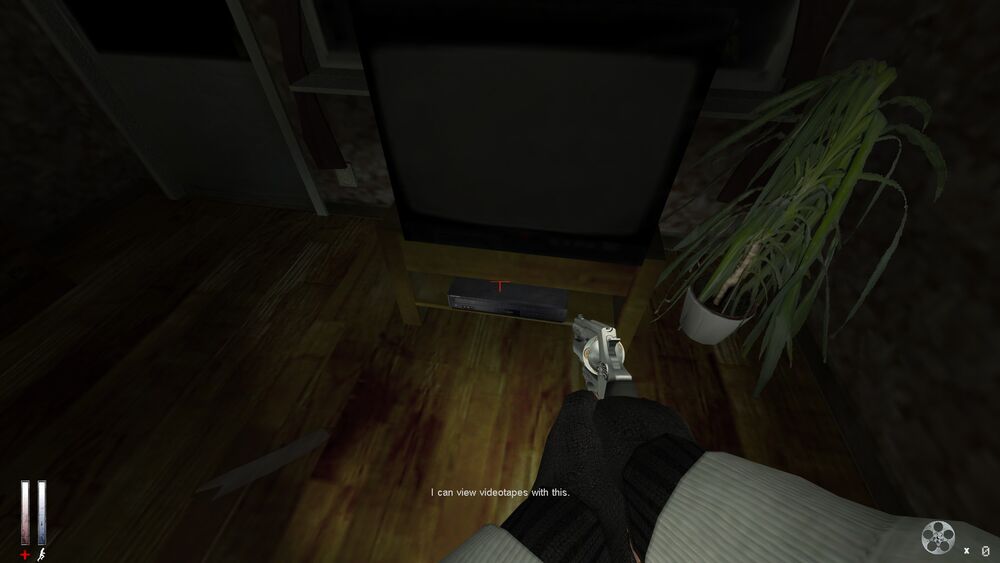 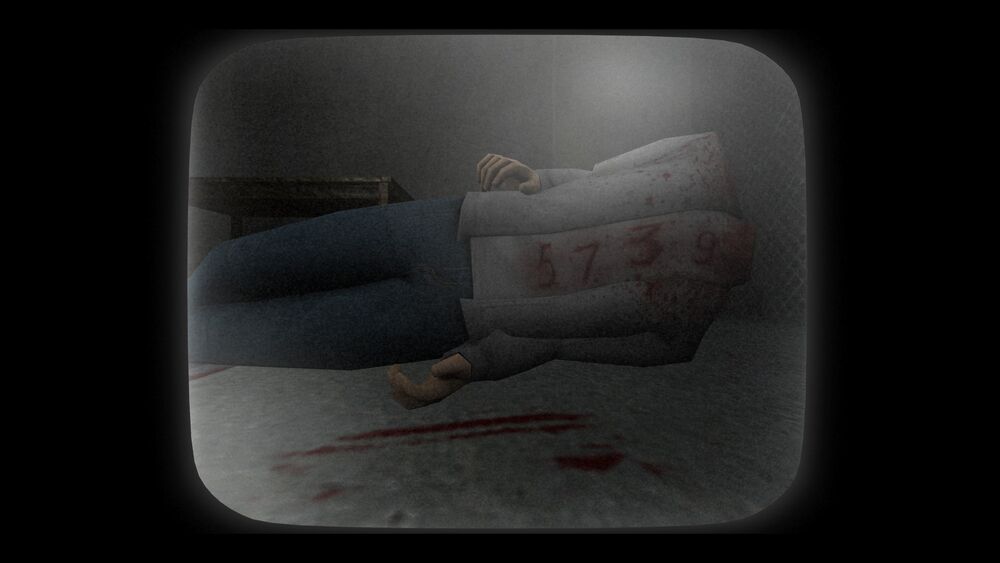 After making his way through the sewers, and descending down a broken ladder, Simon finds himself in a cave with an access door to the sewer’s maintenance area that is locked. Firstly, Simon comes up against a locked door that takes him to another area within the caves. The door is locked with a code. In one of the rooms simon finds a clue detailing the code to be 2..7..9.. with the 4th digit smudged out. The game randomises the 4th digit (1-9), and the player must keep guessing until they get the code right. After unlocking this door, Simon proceeds to the inner area, which contains the corpse of a person that clearly blew their head off with the Remington 870, as well as a lighter. After picking the lighter up, Simon heads back to the room that he found the door combination in and uses it to light a nearby pool of oil. This destroys the rope blocking the other door, and allows Simon to retrieve the exit key. 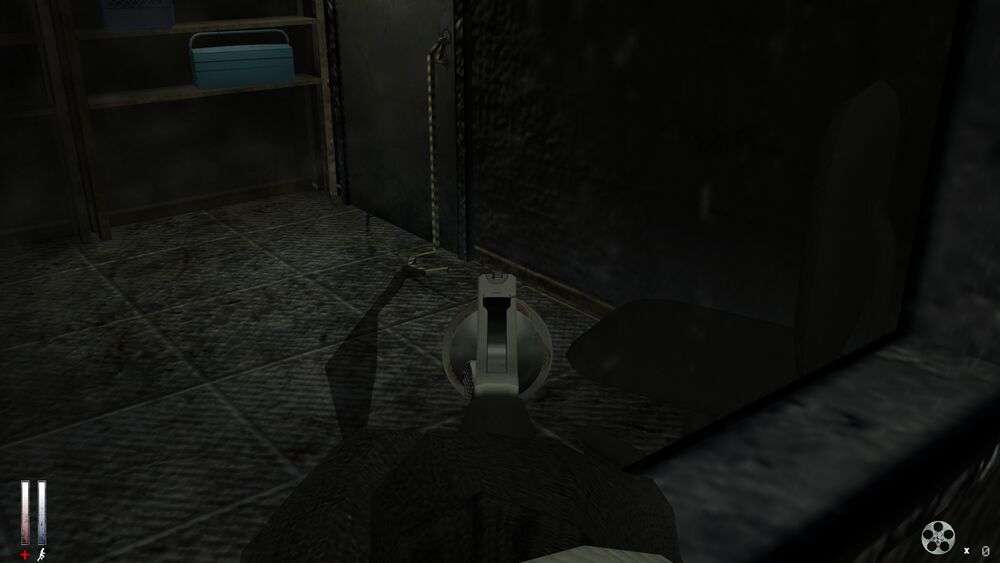 After unlocking the door to the maintenance area, Simon immediately faces another puzzle, this time after seeing Doctor Purnell decapitate a person (apparently after demanding the exit key), Simon sees Mace swallow the exit key the doctor was referring to. Simon must use nearby cranks to electrify the water and damage mace. After damaging mace, Simon must retrieve a saw and cut Mace open, retrieving the exit key that Mace swallowed. The exit key in fact leads Simon to another nightmare sequence, however once the nightmare sequence completes, he escapes the sewers for good. 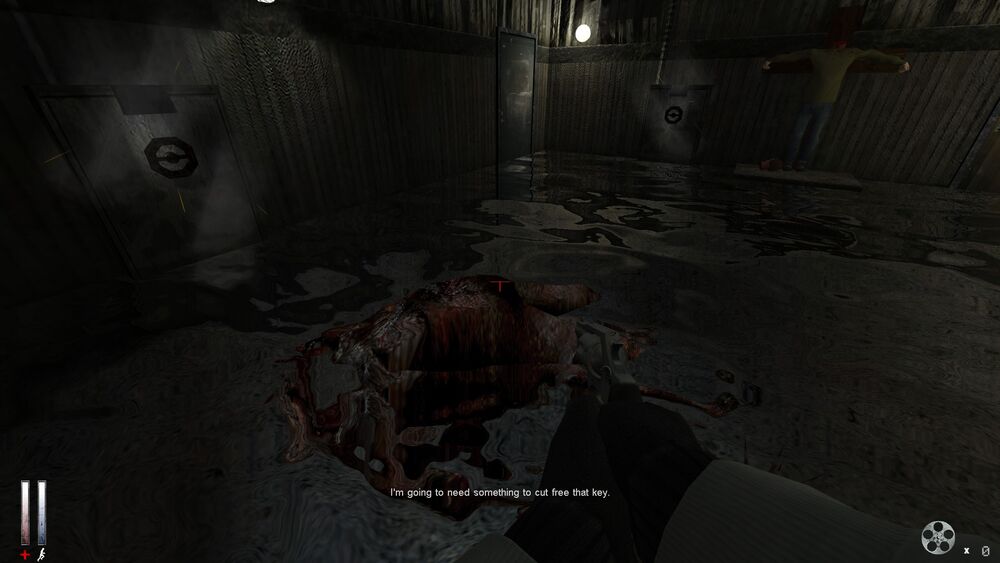 After entering Gustav-Dahl Park, Simon is faced with another puzzle. This time, from clues left within the park, Simon must move the 4 statues to the correct positions. This will open the maintenance shed and allow Simon to retrieve the exit key, as well as the Hunting Rifle. Unlike the first 2 puzzles, the pattern is not randomized and thus can be memorized. Once the statues have been moved to the correct positions, a cutscene will play, alerting the player that the puzzle is correctly solved After retrieving the fuse from Harbor College, Simon enters Saxon Avenue train station, only to find that the trains are out of action. Instead, he must access the subway’s service tunnels and head towards Hansson Square station, one of the main transport hubs on the Subways. However a Human Flower blocks the path. Simon must enter a control room and hit 2 sliding levers to unlock 2 doors, both on a timer. Simon must then sprint across the station platform to the other control room before the door times out and re locks itself. This allows him to activate one of the trains, which destroys the human flower and allows him to pass. 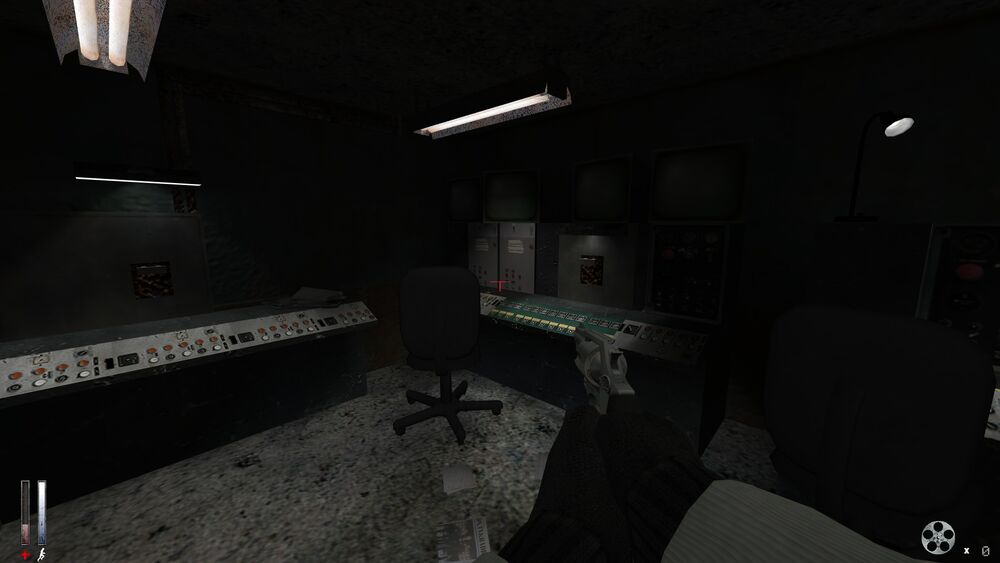 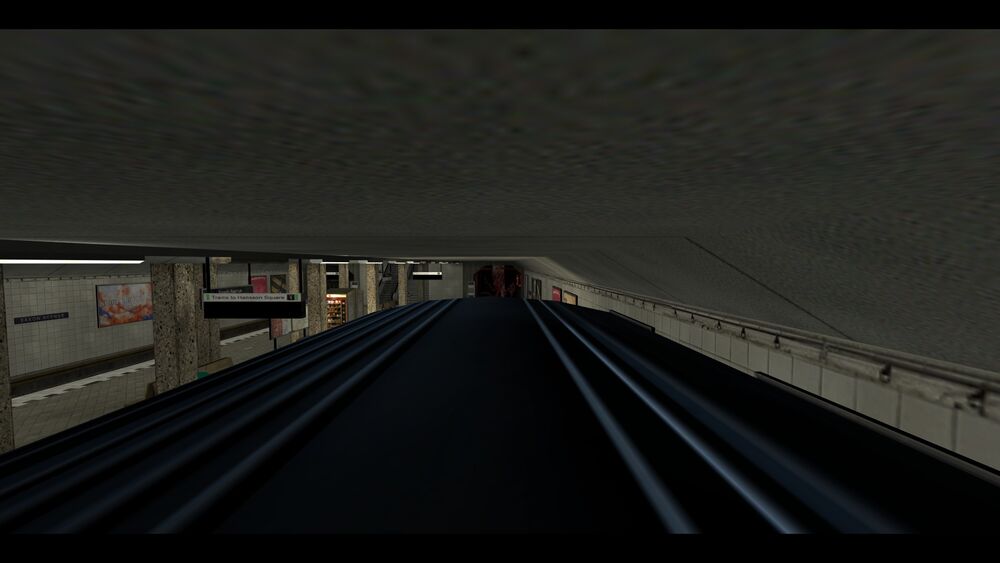 ESCAPE FROM THE CRASHED TRAIN

After finally retrieving the fuses and boarding the train to Norcastle, Simon thinks he’s finally on his way home, however, naturally, nothing is ever that easy. The train goes over a bridge, however the bridge has collapsed and the rail is bent. The train derails and Simon’s carriage is left dangling perilously over the edge. Using the Half-Life engine’s somewhat quirky jumping mechanics, the player must escape the carriage by performing a vertical platforming challenge, and escape the carriage before it plummets over the bridge. 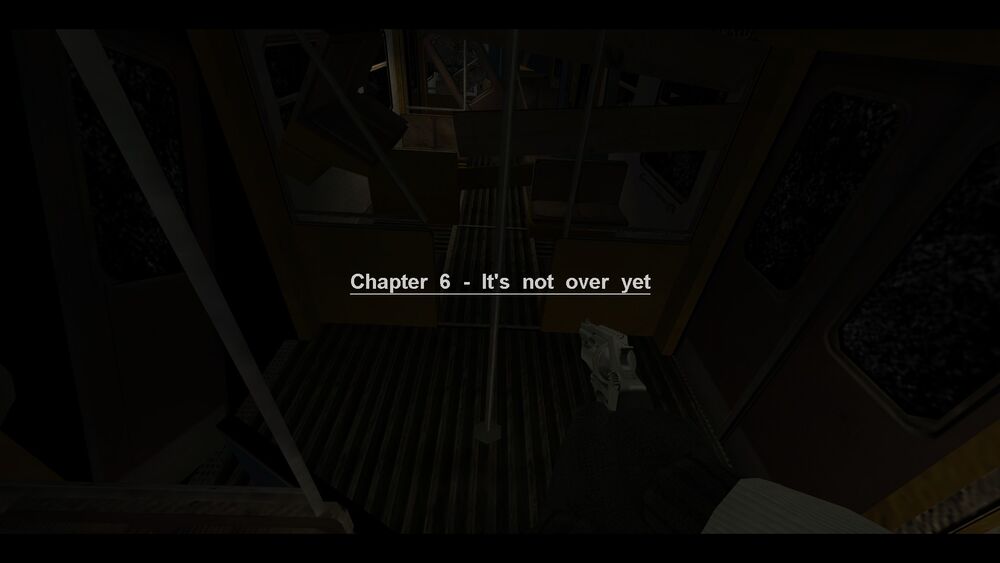 After navigating his way through the outer forest, Simon escapes from a dilapidated house into a dark area with practically no natural light, and nothing more than a couple of lanterns to show the way. The exit door is blocked by a crate, above which hangs a TV (with the words "Drop Me" shown on the screen). Simon must search more dilapidated buildings that are nearby, and find 2 halves of a pair of scissors. After being combined, the scissors can be used to cut the rope, and the TV drops onto the crate, destroying it and clearing the way. 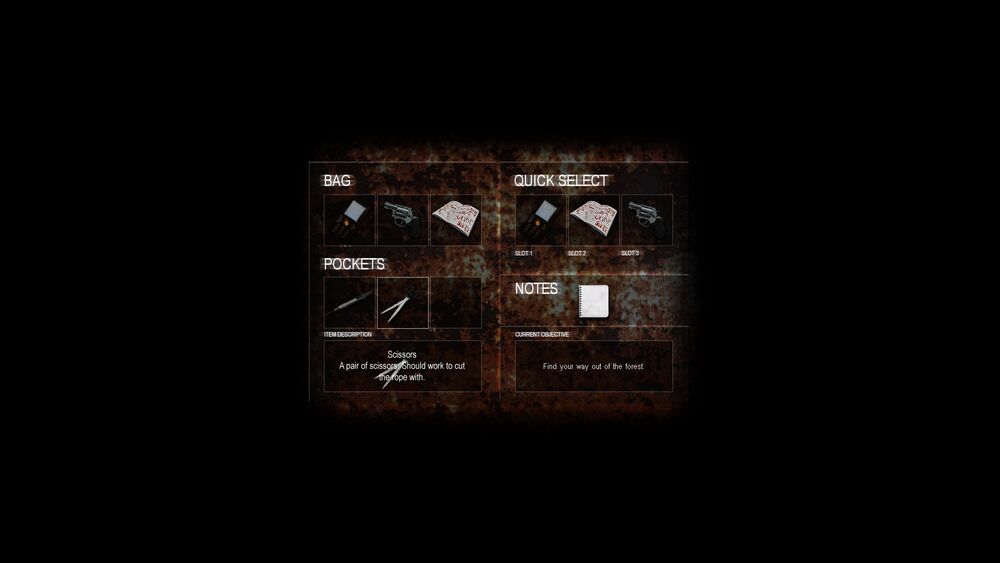 After escaping the forest, Simon enters the Asylum, only to find that it is running on backup and has little power, or lighting. Simon heads towards the basement, and is faced with a puzzle (one used somewhat commonly in video games), in which Simon is required to get all rods in the down position to restore power. This puzzle is not randomised and has the same solution every time. It can be resolved in several ways, the easiest of which is: BC, DE, AB, CD. 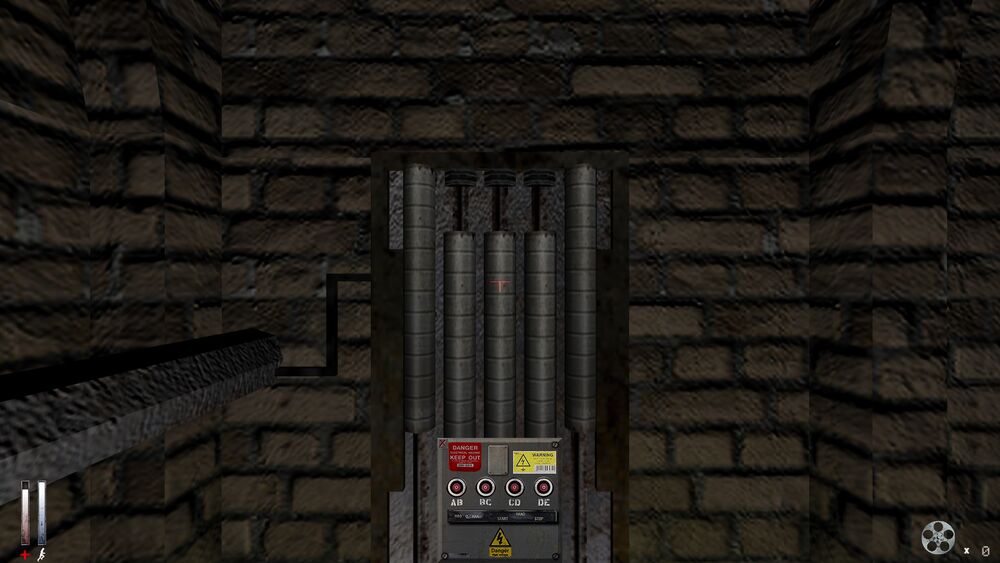 After turning the power back on, Simon has a discussion with Doctor Purnell, and after giving or refusing to give him the gun, the doctor provides Simon with the key to unlock the gate. Simon then enters a room with a phone, and the key to the Asylum’s staff room. After unlocking the staff room, Simon gets momentarily trapped in the toilet, and a rather sinister sobbing noise is heard in the staff room, after which the door opens. The first half of the number plate can now be found. After exiting the staff room a Psycho breaks another door open. Simon can now escape through the window, and down the fire escape to a locked room on the ground floor, containing the second half of the numerical plate. After combining the 2 halves, Simon is presented with a phone number in roman numerals. Dialling the number causes the window opposite to light up, and looking through a telescope reveals Sick Simon holding up the code to the loft, his face hidden by the board containing the code. The code allows him to unlock the attic and confront the doctor.

To prevent the number or code being memorised, one of a few hard coded phone numbers is selected at random, and then the code to the attic is also generated randomly, so both the phone number and attic code will change each time the area is played. Once the code has been looked at through the telescope, line of sight detection is used to determine whether the player has seen the code. Using the telescope again will display the message "The board said 1..1..1..1 (whatever the code was)". Additionally, to prevent people from simply memorising all the phone numbers and dialling them randomly each step in the puzzle requires the previous to be completed before it unlocks (The phone number can’t be dialled until both tablet halves are found and combined, the attic cannot be unlocked until the phone has been dialled with the correct number and the code seen through the telescope). 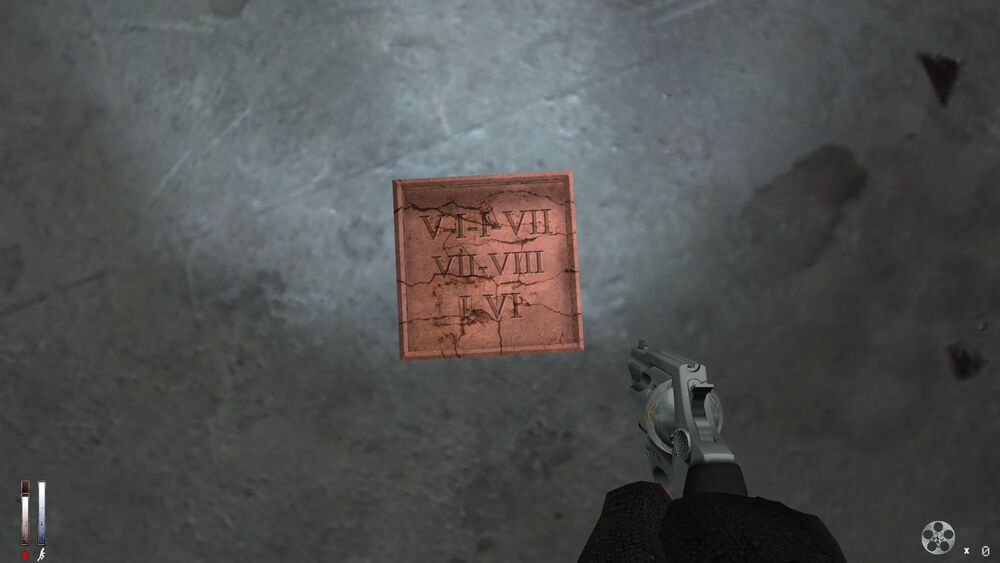 I hope you enjoy the Guide we share about Cry of Fear – PUZZLES & ANSWERS; if you think we forget to add or we should add more information, please let us know via commenting below! See you soon!