Are you tired of seeing Ireland or Denmark sniping counties along the Mediterranean Sea? Or Byzantium in Scotland? Let’s do something about it!

Greetings lovely map painters,
Are you tired of seeing the luscious green of Ireland splotched all over the European continent (but oddly enough reduced to one county in Éire itself?) or Denmark jump skipping from Galicia to Tunis to spite your retinas? Let’s try to prevent reduce that significantly by tweaking the settings we have at our disposal as version 1.0.3.

Please allow us to save rule sets again, Paradox.

Patch notes/updates relevant to this guide:
[1.1.1]
– The AI is now much more likely to demand heretical vassals’ conversion if their refusal would result in them being marked as criminals. This should make the AI less likely to collapse to heresy.
– Heresiarchs will no longer accept demands of conversion.
– Denying a conversion request now gives the liege a revoke reason, in addition to the imprisonment reason they already got.
– Outbreaks of heresy now increase the Fervor of the affected Faith much more positively. This means that large faiths are more likely to bounce back to max Fervor after a Heresy outbreak.
– If a vassal asks for something in return for you asking them to convert faith, denying their request no longer gives you an imprisonment/revoke reason on them (you’re impious by not parting with simple material wealth!)
– The Exclave Independence game rule now triggers closer to succession for AI rulers
– Viking vassals are now more restricted when it comes to overseas conquests
– Discouraged the AI from doing naval invasions when land invasions are feasible
– Russian Vikings are now much more unlikely to conquer overseas

The unaesthetic kind of border gore is where Ireland is splattered across France and Spain with a county here and there in Scandinavia. Or a Byzantine stronghold in the middle of East Francia. Enclaves of distant cultures having no believable reason to be there.

We don’t want a Jackson Pollock, nor a Piet Mondriaan. Something in between.

To sum it up:
BELIEVABLE WORLDS

Start:
When creating a new game using any starting date, navigate to the game rules. (This is different from the Options menu in the main menu)

Besides picking ironman, there are a couple of options that are of interest to us:

Exclaves and Enclaves are like the Karling princesses; they are everywhere, and they range from Hideous to Homely. Like with a hydra, the cut ought to be made at the base instead of the head. Thus, to contain the Karlings, or any other big players for that matter, to their own theatres, it is recommended to put the Exclave Independence game rule on Total. 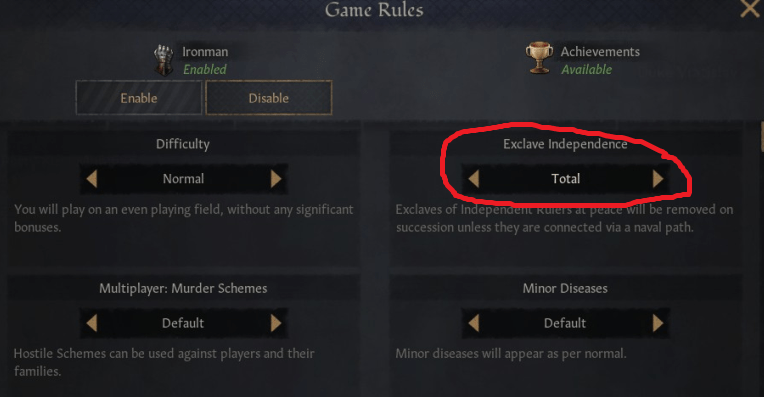 When the Byzantine Emperor inherits or conquers a county in France without a direct land or sea connection to his de jure territory, upon his death, an independent ruler will take over that specific county. It thins the paint of the artistic AI.

A byproduct of this rule is that if one decides to swear fealty to or play as a lower-ranking noble under a king or emperor, it becomes easier to gobble up counties that the liege conquers since they will lose it to a freshly formed independent ruler.

Often overlooked, but perhaps the most important game rule we have at our disposal is Diplomatic Range. It reduces the diplomatic range (characters that can be interacted with) by 25%. What this means in practice is that Anglo-Saxons can still marry Sicilians, but Anglo-Saxons won’t be able to dip into the Persian or Indian gene pool and vice versa. Do not worry; you will still be able to get plenty of genetically gifted spouses.

You see, when the Norsemen are contained to their own part of the map, then they are less likely to snipe a county in North Africa. In combination with the Exclave Independence rule, you effectively make sure those pesky Norsemen stay on their side of the Strait of Gibraltar.

Another reason why we should tweak this option is that, again, the splotches of Byzantine Purple in the middle of Midnight Blue France happen because somehow the AI has fudged their family relations up to such a degree that the Emperor inherits counties that pass out of the realm of France. By limiting the diplomatic range, you prevent the eyebrow furrowing inheritances from ever appearing as potential spouses’ pool is severely limited to the own locale.

Now you are set to get a believable alternate history world map to some degree using the following two game rules: 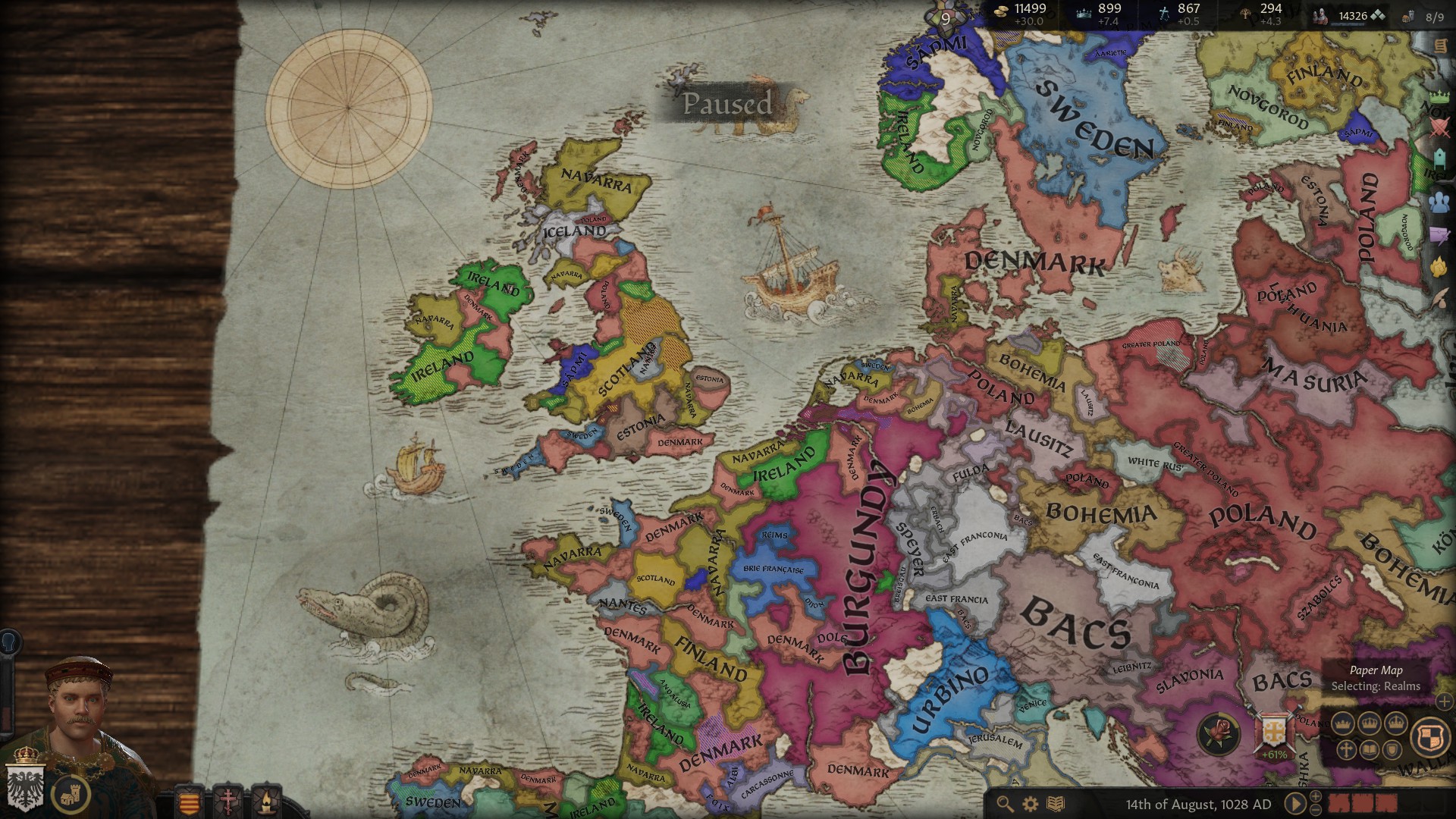 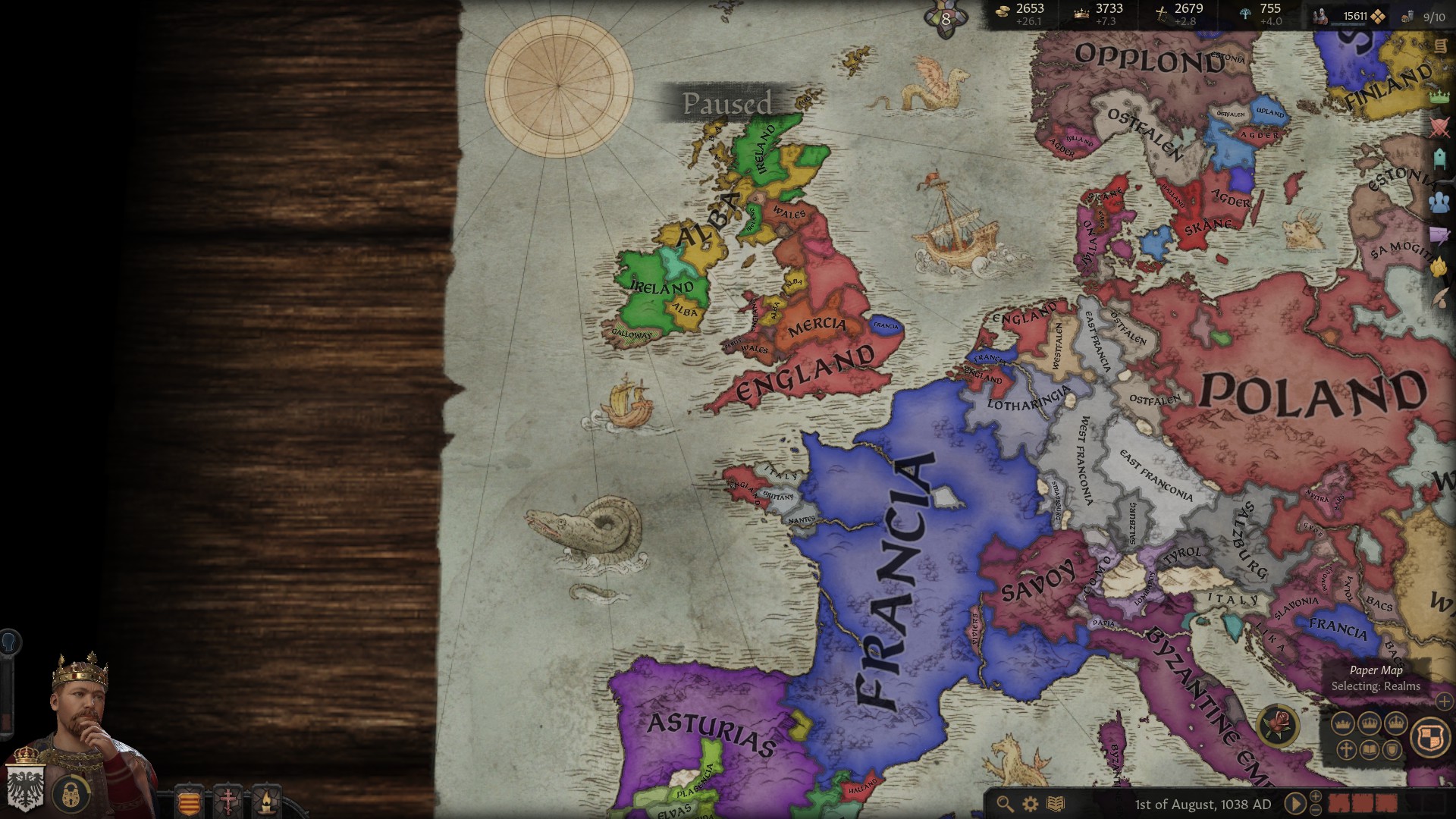 Note the severe lack of Finland, Ireland, Scotland and Denmark splattered all over the place while instead, several power blocks have consolidated themselves. 150 years later (so about 350 since the start), France imploded; but it was a tapestry of mostly French counties, English counties, and a lost Scottish duchy.

Those who do enjoy spending time in the religion map mode, and lose 32 stress from seeing a Cathar infestation in Southern France, make sure to set this to strict. It contributes to the whole ‘believable worlds’ criteria mentioned in the introduction; perhaps it should be left up to the player whether a Zunist Roman Empire (Praise Sol Invictus) is aesthetically pleasing rather than to the AI.

Nevertheless, changing the default rule has a negligible impact on the map: heresies will pop up regardless of how stable empires, kingdoms, and/or the religion is. Likewise, heresies have a negligible impact on stability anyway since rulers tolerate pockets of heresies within their empire. In CK2, rulers would demand reconversion or title revocation, which the AI never seems to do. In 1.1.0, refusing (re)conversion gives the ruler title revocation.

And don’t forget to tweak your Options in the Main Menu too!
Especially the tooltip ones in this menu: 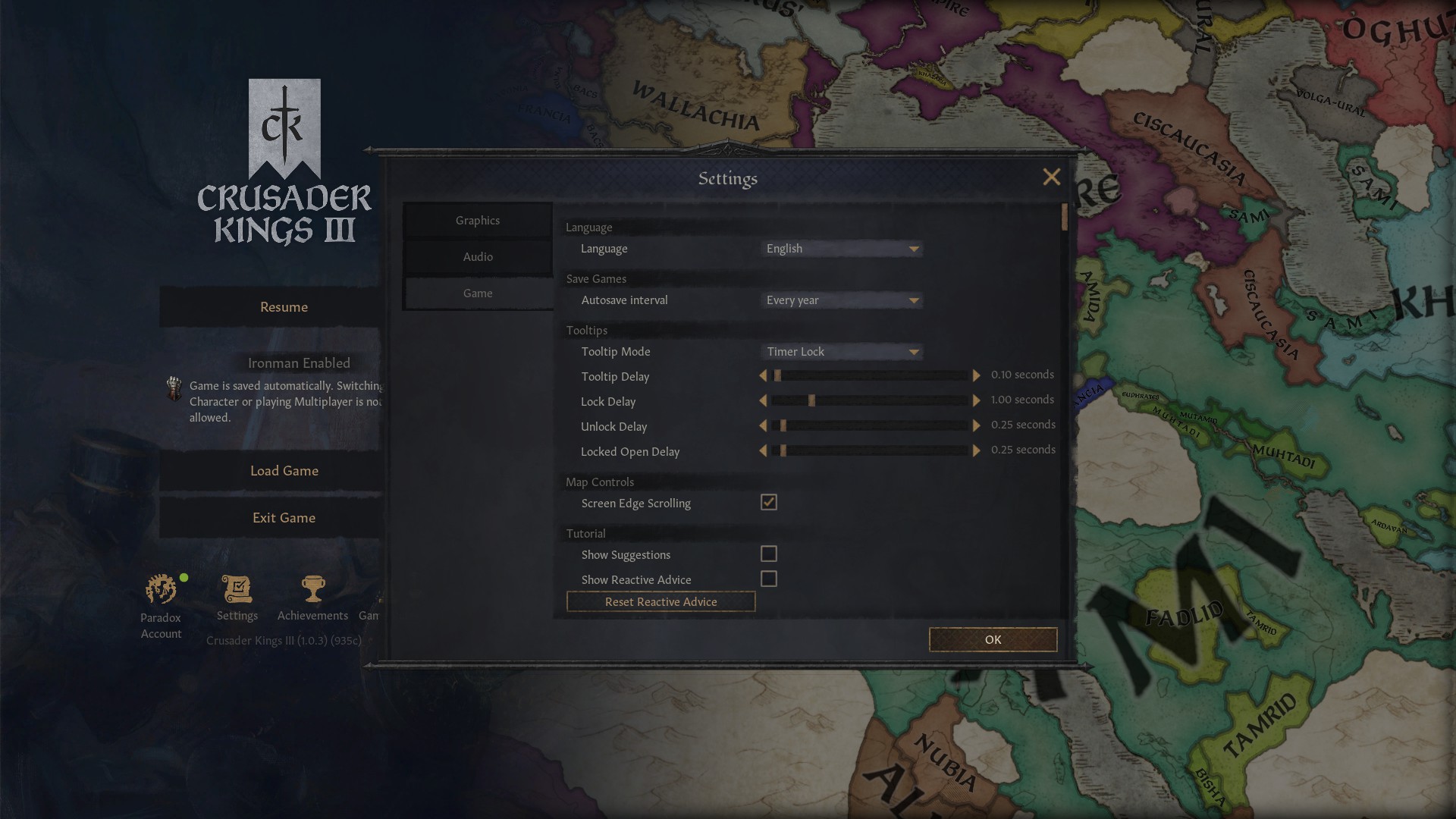 This is all about Crusader Kings III – Border gore and You; I hope you enjoy reading the Guide! If you feel like we should add more information or we forget/mistake, please let us know via commenting below, and thanks! See you soon!