Attempt to concisely provide IMPORTANT information needed to play your role and the game.


This guide is formatted in a way where it provides the information you need in an active game from the order it may be relevant.


It is sorted by Modular Chapters in the Table of Contents.

With a few suggestions of ‘How to Play’ the roles


Words that are underlined are terms used by the game, go to the glossary for full definition. 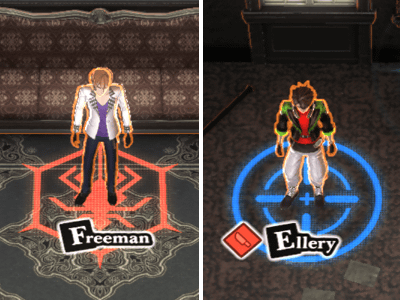 
First and foremost, everyone needs to know how the kills work.

The murderer VILLAIN can only kill the quarry TARGET if they are on the SAME TILE.

VILLAIN PAWNS can not murder and NON-TARGETS.

However, any PAWNS are able to INJURE PAWNS by inflicting Status Ailment to restrict their movements.


The conditions for a SUCCESSFUL KILL

Reaching the SAME TILE can be tricky as MAX MOVEMENT changes from how HEALTHY your PAWNS are. 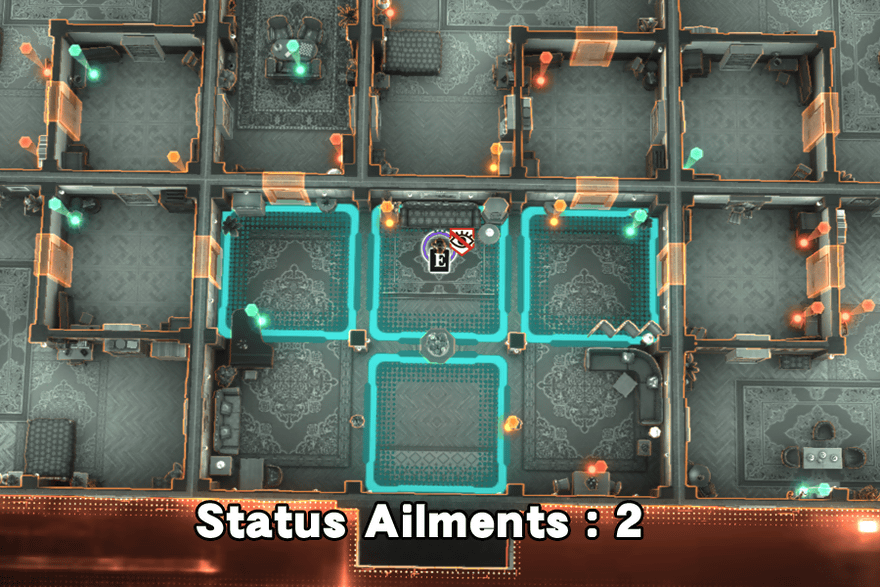 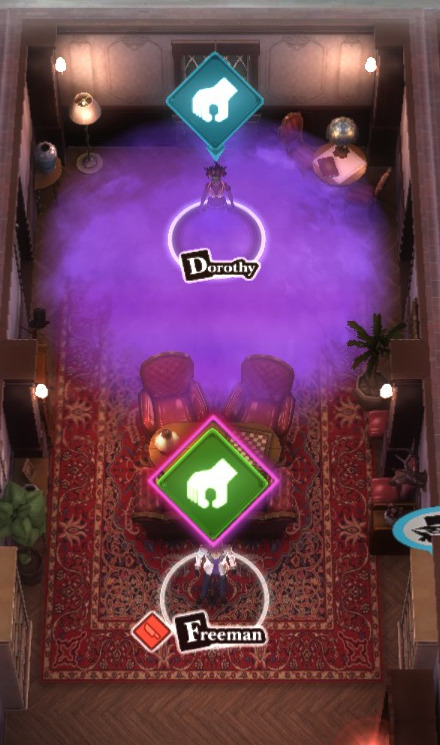 Avoiding WITNESSES can be achieved in several ways.

(right-side image shows that LoS is not broken, but they are not close enough to murder each other, being 1 movement space apart)


A broken or repaired fuse box takes ONE TURN to take effect.


*I have not confirmed this myself yet 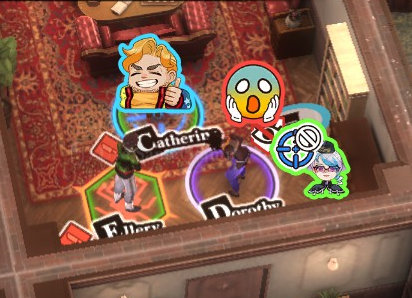 (The image above shows a VALID KILL

the WITNESS, Dorothy, is suffering from total blindness via 2x Status Ailment

The VILLAIN, Ellery, is able to murder the TARGET, Catherine, to win the game.) 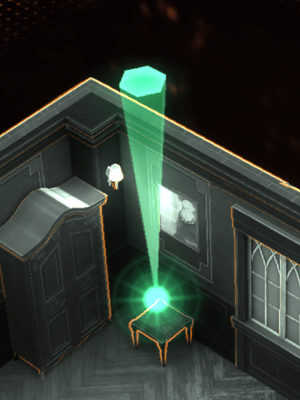 You DO NOT HAVE the same INTEL as your teammate.

So SHARE INTEL on Food Locations when playing in Teams.

INTEL: Has INITIAL intel on a few food items across the map.

Action Priority: Moriarty’s action trumps your, otherwise you “share” priority with other players.

How to Play Sherlock 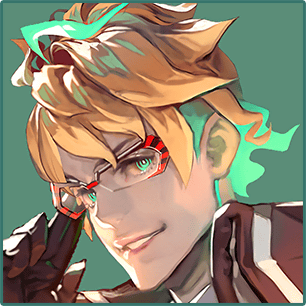 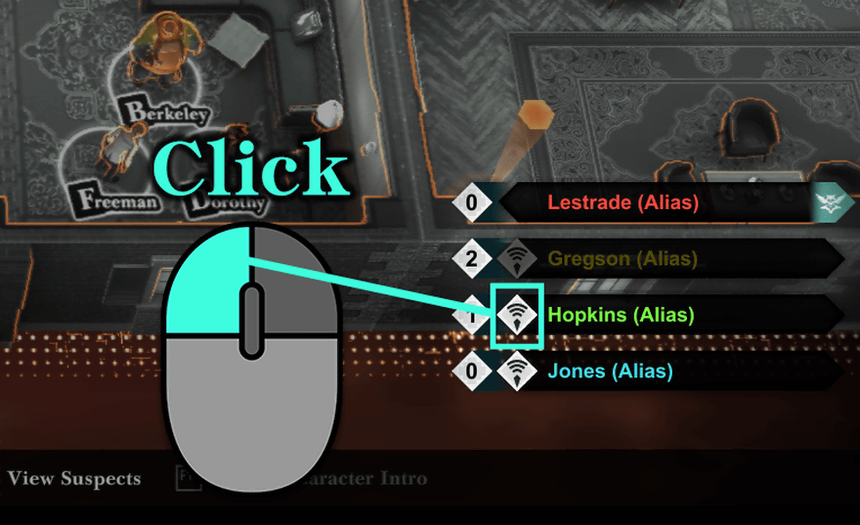 INTEL: Has INITIAL intel on 2-3 food items across the map, while revealing more later on.

Action Priority: Moriarty’s action trumps your, otherwise you “share” priority with other players.

How to Play Watson 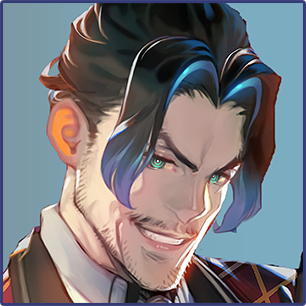 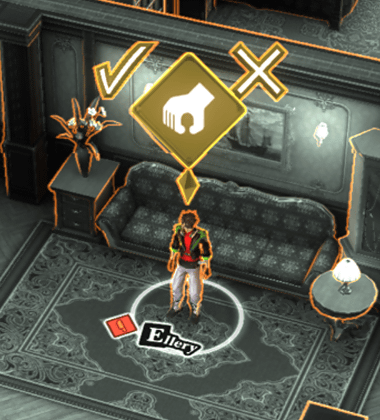 Moriarty will always trump your actions, so if a player is DISCUSSING that they are moving a unit, and you attempt to CONFLICT with it, and YOU WIN, then they aren’t the Mori.

You DO NOT HAVE the same INTEL as your teammate.

So SHARE INTEL on Food Locations when playing in Teams.


NO ONE on Team Moriarty can issue a controlling command on the TARGET PAWN.

Has INITIAL INTEL on most food items & weapon items

How to Play Moriarty 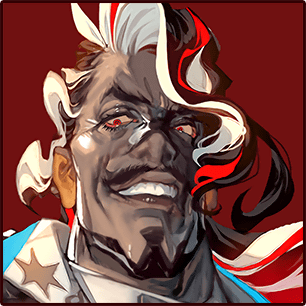 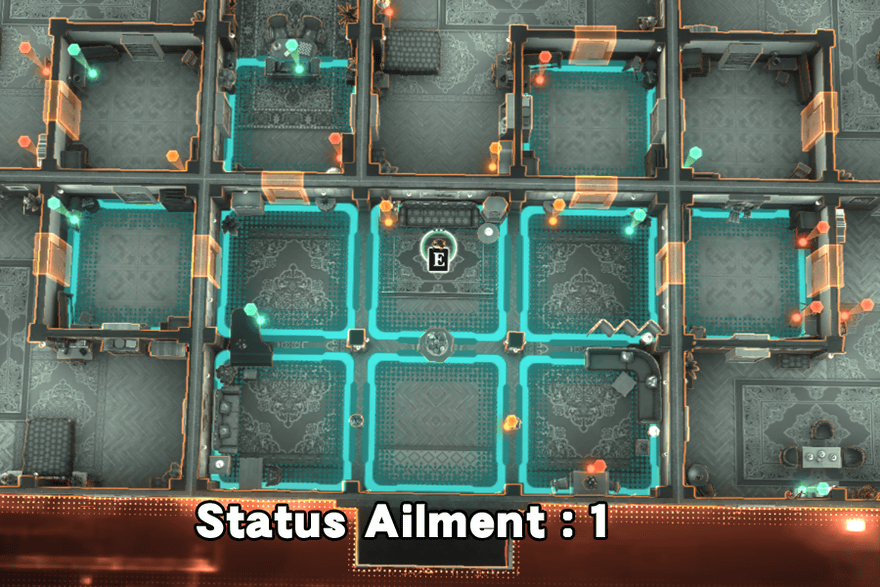 The image on the left-side shows a PAWN with a MAX MOVEMENT space of 2.

This occurs if the PAWN is afflicted with 1 debuff Status Ailment;

OR fatigued from running


NOTE: Moriarty’s action can IGNORE pawn’s fatigue. Able to force a healthy fatigued pawn to run 3 tiles, but doing so reveals your action. 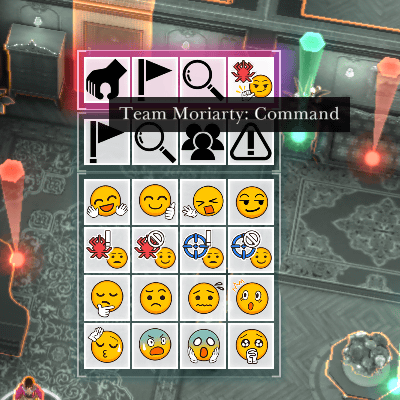 Has INITIAL INTEL on 2-3 food items

Moriarty’s action trumps your, otherwise you “share” priority with other players.

How to Play Irene 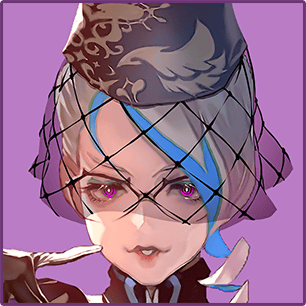 Use the in-game COMMUNICATIONS and ASK FOR CONFIRMATION before locking in your actions.

In a TURN you can choose to commit an action on a PAWN. The turn will then compiling all CONFLICTING ACTIONS and execute them accordingly for that TURN.

(e.g. Moriarty’s Action has HIGHER priority than EVERYONE. Everyone else has SHARED PRIORITY with each other, and will be RANDOMIZED if CONFLICTING) 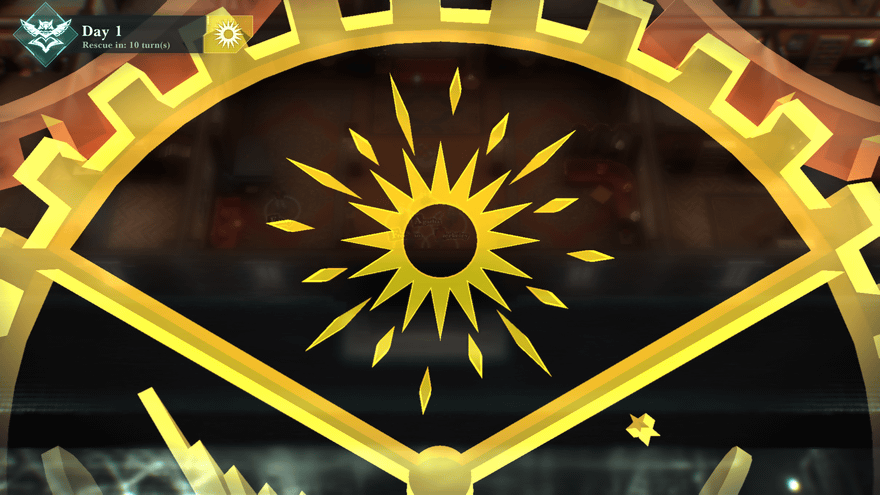 A Single Turn Phases in detail;


NOTE: A player’s MOUSE CURSOR is HIDDEN from other players during their own Player Action Decision phase. Otherwise it is always VISIBLE between ALL PLAYERS.

After every 3rd turn, the day ends with an AI DEDUCTION and food consumption.

Priority is as follows in order of importance;

(image above shows PAWN action priority order in effect, the most injured players goes last, then it is sorted alphabetically.)

As TEAM SHERLOCK you don’t know which one is the target or villain, but you can group the PAWNS together in a way to use the AI DEDUCTION to help you narrow it down.


Keep in mind, a skilled enemy TEAM MORIARTY also knows this too and will work against you to hide them. 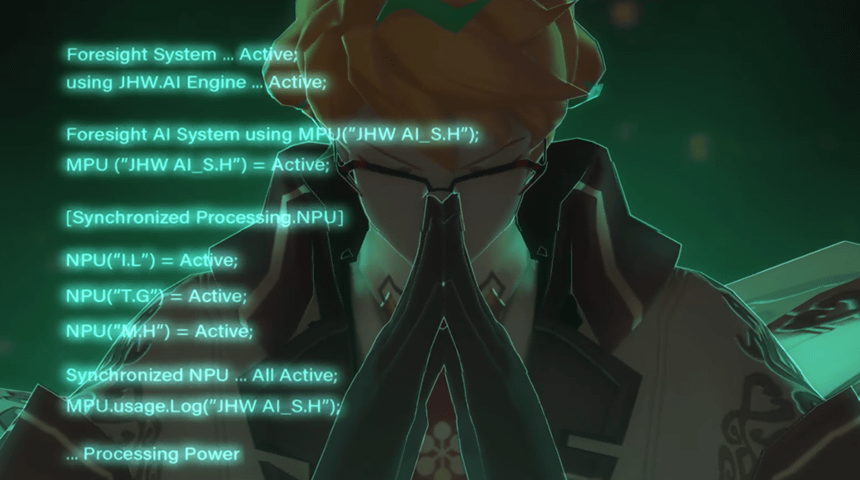 At the end of a day/night cycle the AI DEDUCTION will reveal a critical hint.


There are THREE AI DEDUCTION periods in the game, one at the end of each day.

After the LAST ONE the game will END IN A TURN.


The Sherlock AI DEDUCTION is able to reveal whether or not the target is within 3 MOVEMENT SPACES of the VILLAIN at that current moment in time. And shows you the results of the PAWNS that aren’t a TARGET a VILLAIN or neither. 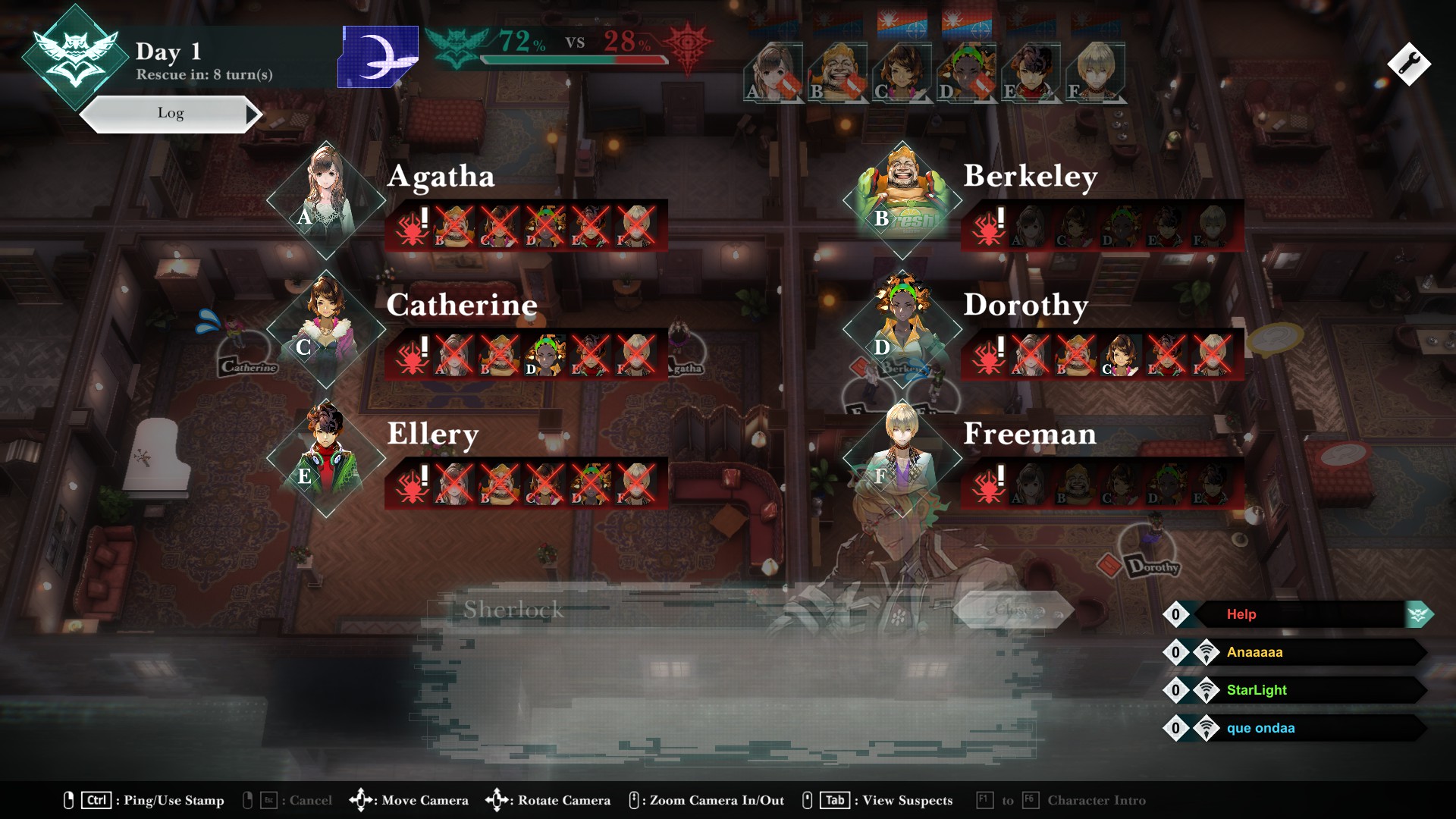 The AI DEDUCTION in practice will essentially answer the question of

It won’t literally pop-up with a prompt saying Yes or No.


Instead, it’ll just reveal it to you with all the diagram, and leave you with the THREAT ARROWS.


To make it as comprehensive as possible, let’s use pictures.


Let’s say there are two clustered groups of PAWNS spread on completely opposite sides of the map.


After the AI DEDUCTION

If it answered NO, then all the THREAT ARROWS in this diagram will be pointing across the map

(See picture below, A is the TARGET & D is the VILLAIN who far from each other, but Team Sherlock only knows the PAWNS close together are safe, but not where the TARGET nor VILLAIN is) 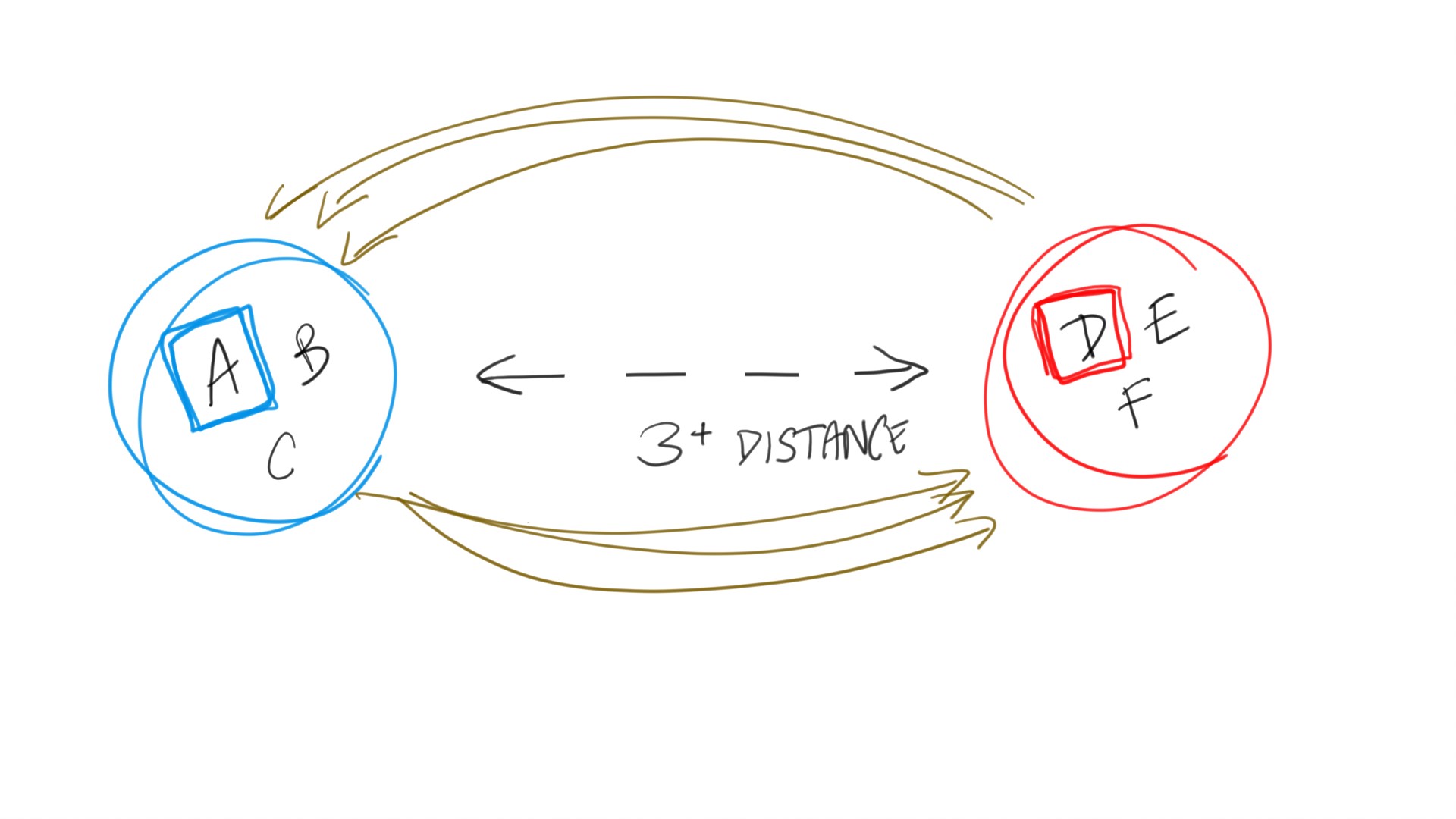 (the in-game screenshot above is an example of how it might look like, but does NOT truly depict it)


After the AI DEDUCTION

If it answered YES, then all the clustered PAWNS will be pointing at each other.

(See picture below, A is the TARGET & B is the VILLAIN who are next to each other, but Team Sherlock only knows the PAWNS close together are vulnerable but not which cluster) 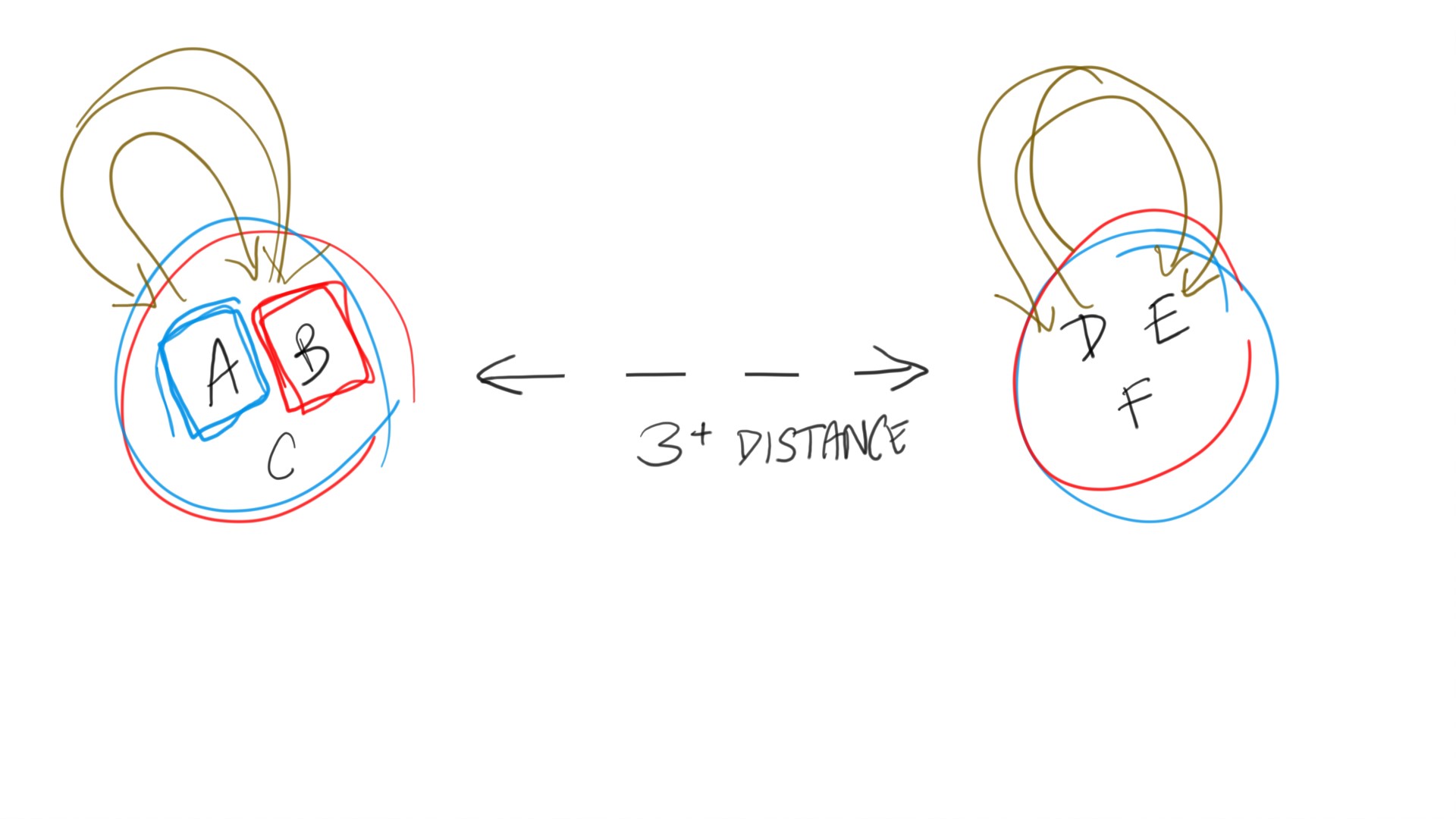 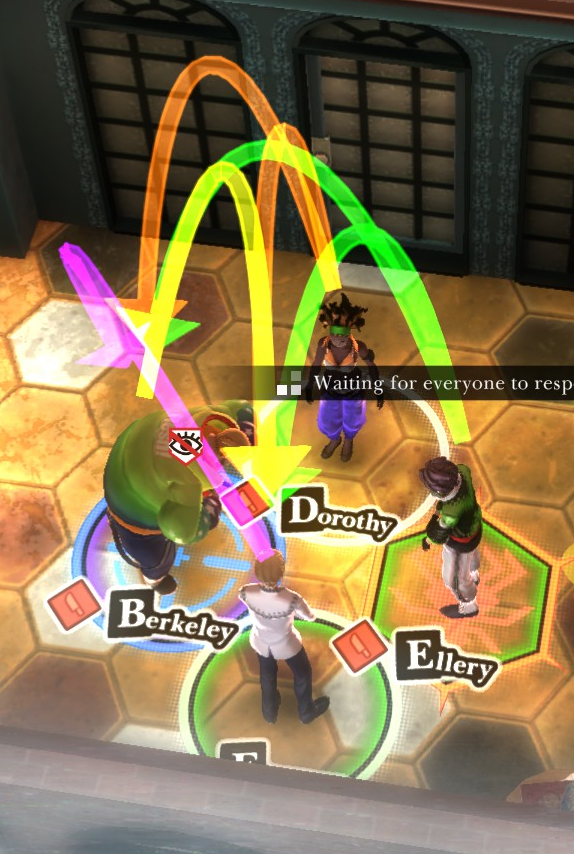 (the in-game screenshot on the left-side shows an example of it.

Berkeley TARGET and Ellery VILLAIN are clustered together, but so are the rest of the PAWNs,

thus Team Sherlock only knows they are together, but not which PAWNs)

Day 2, afternoon, on Turn 4 and beyond there will be RANDOM hazards spawning around the map. This depends on the game mode settings on how many hazards were turned on.

The wild dogs will attack nearly indiscriminately any Pawn. However, the axe hunter will have different orders of priority on who they like to attack first.


“Project Winter” will give you the hunter, otherwise it will be wild dogs.


They have 3 preset spawn locations for each map. Usually on the very top of the map, far left or far right of the map. 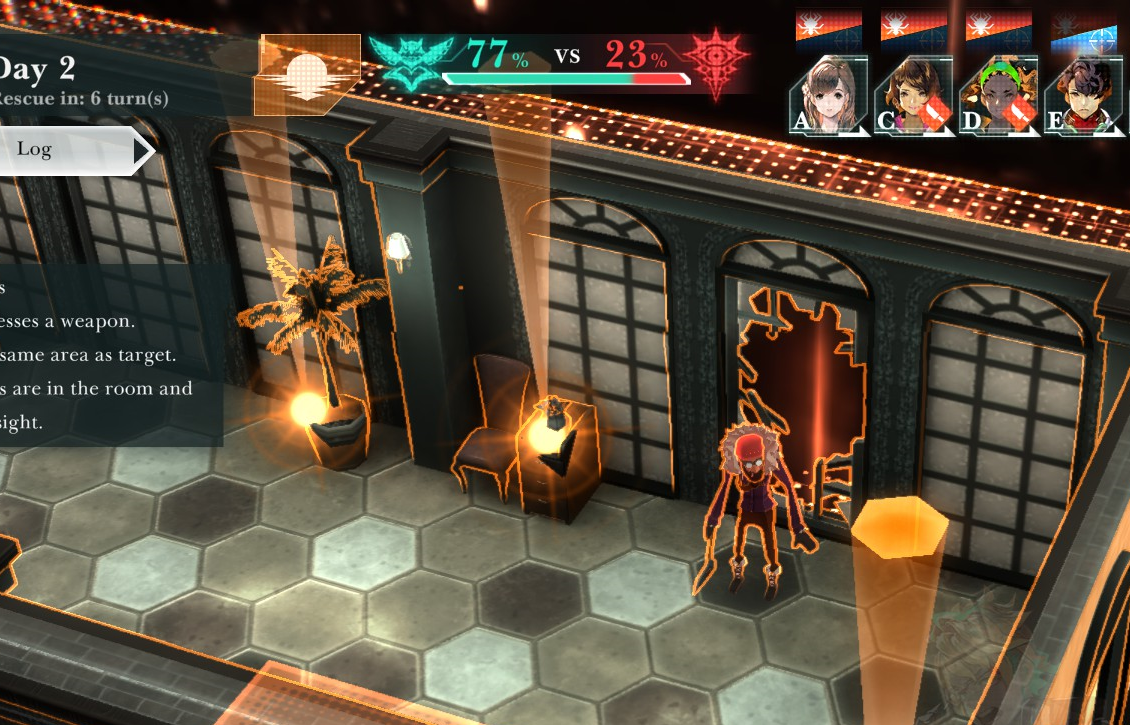 At this point you should be wrapping up your match around Turn 6. Whether if you’re playing Moriarty and close enough to execute assail to your kill the target, or if you’re not and trying to end it in a draw by hiding the true killer in a shroud of deception, here are the gameplay rules; 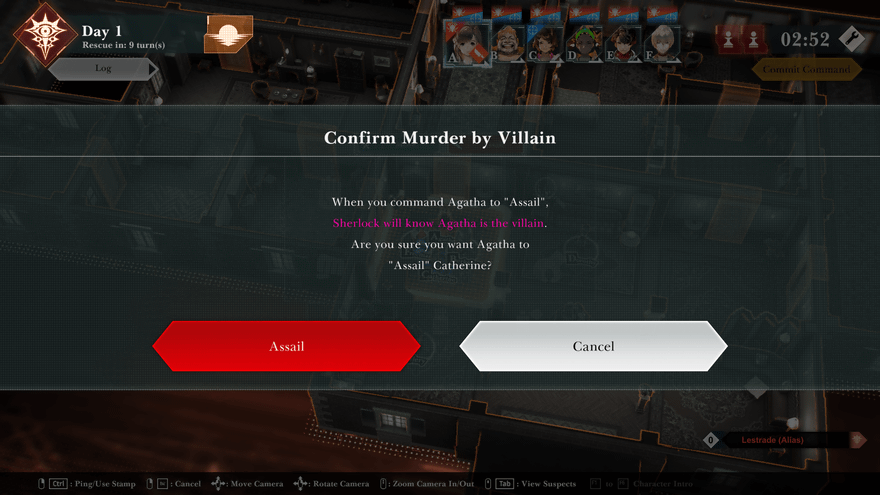 Moriarty extends the game ONE EXTRA turn if he reveals himself with assail who the killer villain and quarry target are, but fails to make the kill on that same turn. UNLESS if it is already the final turn in the game.


IMPORTANT In-match DAY/NIGHT TIME does NOT progress after entering the FINAL TURN!

E.G. If you are wanting or avoiding the turn for starvation to occur.

Endgame and the Post-game Voting

The villain must kill the target by morning of the 4th day. (Turn 10)

Team Sherlock must Identify the TRUE villain by the morning of the 4th day AND save the target.


DRAW conditions, if the TRUE villain isn’t identified by the end of the post-game guessing, it is a draw.


If the TRUE villain is identified by the PLAYER Sherlock at the end of the post-game guessing, Moriarty’s team loses.


Watson player’s votes do not matter, and have NO EFFECT on match outcome. Casting your vote is just to be suggestive to the Sherlock player. (aka for matches that are 2v2)


It is impossible for Sherlock players to win the match without them all correctly guessing the villain, so a Sherlock player is more likely to vote for the pawn that has the most votes among players. (aka for matches that are 2v1 or 3v1) 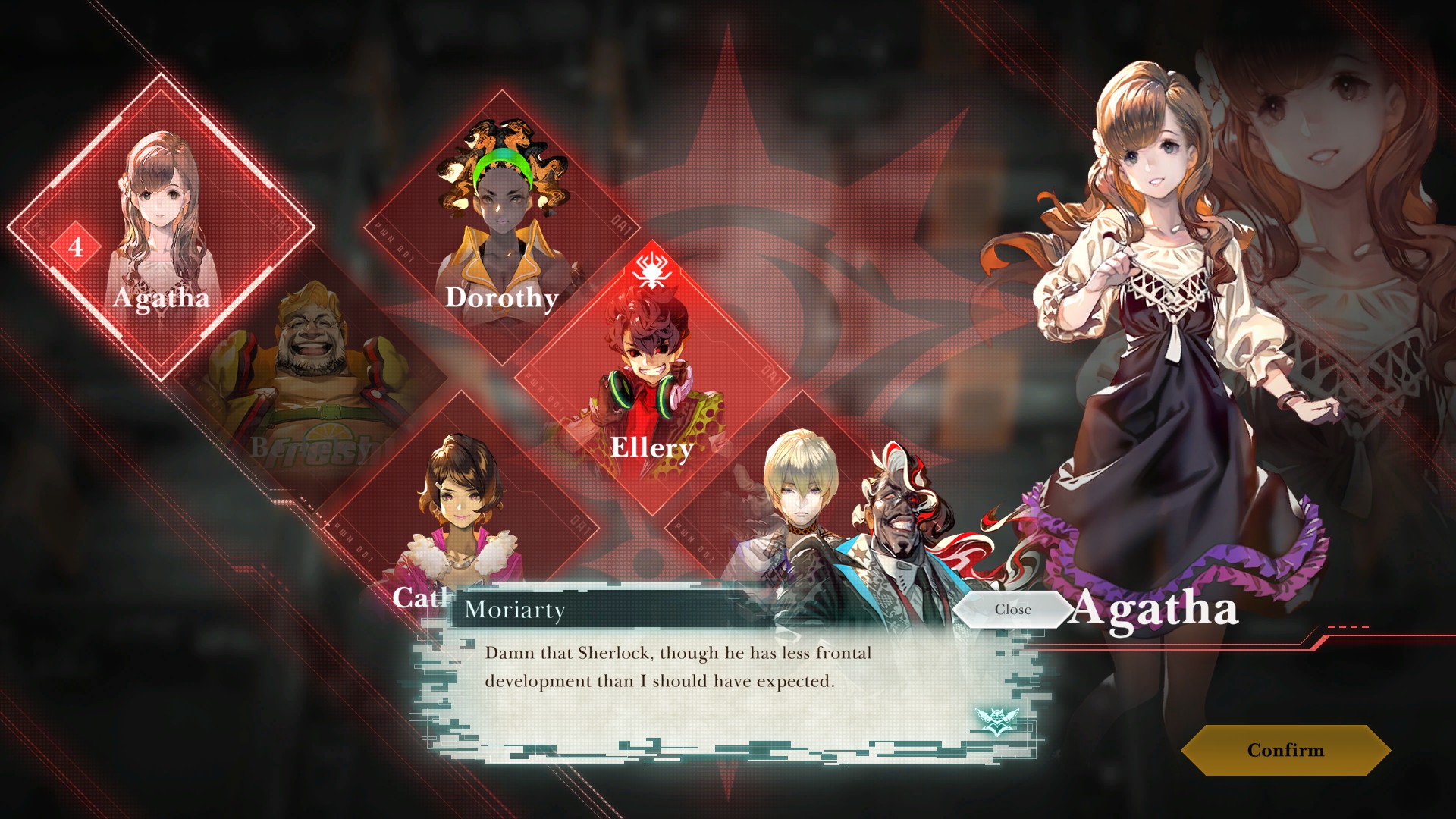 (above image shows a vote of deception, Team Sherlock failed to vote on the correct VILLAIN)

either google it, open it in-game, or click on the link below;


Commands Conflict – These rules apply when multiple players try to take command of the same pawn.


Pawn – the character units on the playing board that players can control.

Status Ailment – A debuff sustained by a Pawn, could be Hunger or Injury from combat damage dealt by toxic gas or 3rd party enemy. Can be cured by food or medicine respectively.


Sherlock’s AI Deductions – After a day cycle has completed, the AI will automatically eliminate potential targets by deduction using the “3 movement distance rule”. This depends on how close or far apart the villain is from the target.


Wild Dogs – an “3rd party enemy” which attacks Pawns. This can be other than the wolves, an axe wielding hunter, (or any DLCs adds more)

ANY Pawns can attack these “3rd party enemies” to incapacitate them for the match.

Project Winter – this is a crossover from another video game of deception, changes the “Wild Dogs” into the axe hunter. With the addition of a bit of flavored text for being snowed in.


Villain – the pawn that is murderer out to kill his quarry target. This pawn is known by Team Moriarty but hidden for deduction for Team Sherlock.


Target – the pawn which is the quarry that is being hunted by the murderer. This pawn is known by Team Moriarty but hidden for deduction for Team Sherlock.


Witness – a pawn that is not the Villain or Target that is inside the same tile and/or room as the Villain and Target, thus preventing a successful murder from occurring.

Fatigue – pawn is exhausted from running in the previous turn, will heal from fatigue on the next turn.

No Vision (icon) – this pawn can not be a witness to the murder, even if they are standing on top of them.


Assail – the action that is exclusive to Moriarty player, used to commit an attack on the Quarry Target Pawn, this causes the end game chase to begin. Irene can not execute this action.


Player Level – that’s essentially number of matches they player has played for lvl 0-30, beyond that is just experience level. The number next to a Player during Game Lobby. Does NOT reflect skill level nor win/lose rate ratio.


Food – heals hunger and is automatically consumed at the end of the day if a pawn is holding onto it. Appears in green nodes.


Medicine – heals injury from toxic gas or 3rd party attacks. Appears as purple/blue item on the floor when dropped.


Fuse Box – circuit breaker that turns off the lights, breaks ranged Line of Sight (LoS) It can be protected if TEAM SHERLOCK finds it first, or vulnerable for use if TEAM MORIARTY finds it first. A broken or repaired fuse box takes one turn to take effect. Hidden in orange nodes, appears as blue nodes once discovered.


Weapon – needed for the villain to assail and murder their quarry target. Appears in red nodes. 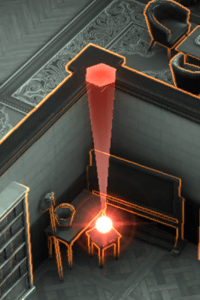 (image above shows a red node, where an undiscovered weapon is)

This is all about CRIMESIGHT – Gameplay Walkthrough Guide; I hope you enjoy reading the Guide! If you feel like we should add more information or we forget/mistake, please let us know via commenting below, and thanks! See you soon!